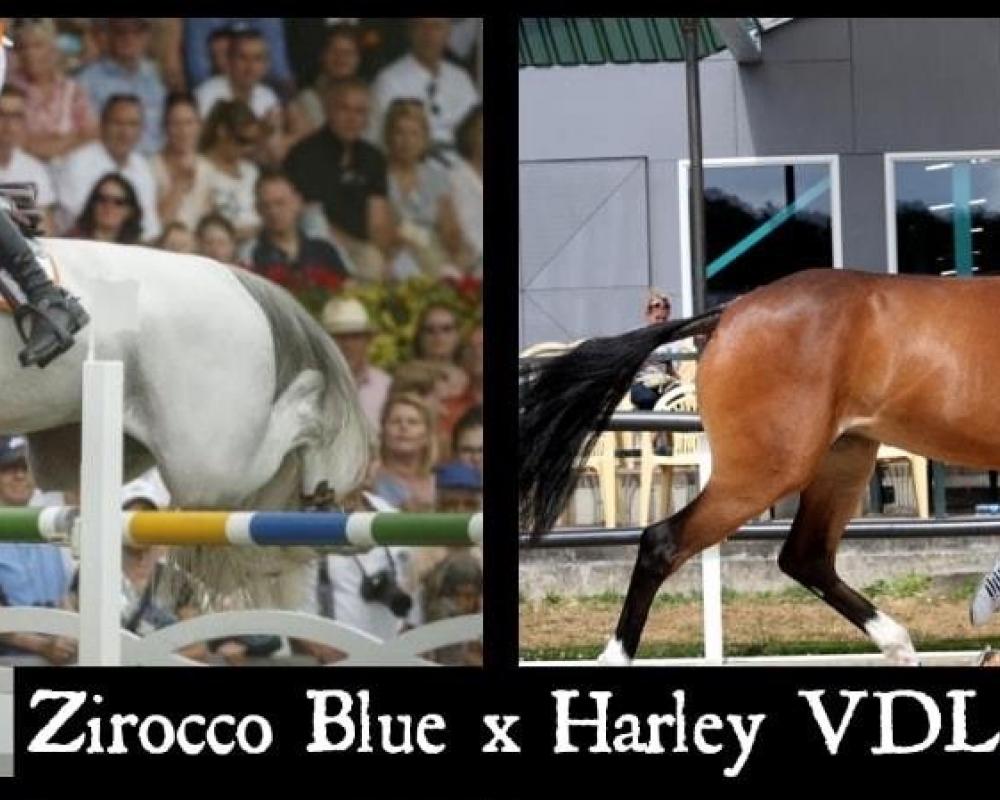 Foal due early April, 2020 by Zirocco Blue VDL out of young provisional Keur mare by Harley VDL. Mare was recently purchased from VDL Stud in the Netherlands and imported to the US.

Wherever Zirocco Blue competes all eyes are upon him with his scope, jumping style and efficiency. Under Jur Vrieling he has achieved several very impressive international results. They won the Team Gold Medal at the European Championship and individually were 5th. In the Las Vegas World Cup final they finished 10th. The World Cup of Oslo, the Grand Prix’s of Kopenhagen, Melsomvik (2x) and Geesteren, the Masters in Mechelen - all saw Zirocco wearing the winner’s sash. As a member of the Dutch team they won the Nations Cup of Rotterdam, Kopenhagen and Gijon. In the Dutch Jumping Championship he was 2nd.

Zirocco Blue performs exceptionally well in the sport but also in breeding.

2018 Was the year of the champions for Zirocco Blue. Willem Greve won the championship title with the seven-year-olds in the Blom Cup in Ermelo with Gogo Karla V, but at the World Equestrian Games in Tryon there was much more spectacle for Zirocco Blue. His son Eddie Blue won the golden team medal under Devin Ryan with the American team. Eddie Blue finished second in the World Cup Finals earlier and tied one top performance after the other. A second place in the Grand Prix of Ocala, second in GP Toronto, second in Toronto World Cup, second in Nations Cup of Aachen, second in Nations Cup of Sopot, third in Grand Prix of Devon, and so on. It was not for nothing that Eddie Blue was chosen as the best jumping horse in the United States.
But there are many more Zirocco Blue offspring that perform at the highest level; think of Dobbey, who came second under Lars Kersten at the Young Riders Championship, or Deep Blue Bridge S who won the Linz Grand Prix, and Durango VDL who won the Blenheim Grand Prix. Also horses like Fancy Girl, Donjo, Zidora and Magnolia Mystic Rose are active at the highest level.
Also a large number of young horse classes were won over the years by his offspring, Fair Field won in Asten and Geesteren. Fugero Carlos and Florian both won two classes during Outdoor Gelderland. In Zuidwolde Fresco Blue, Guessina and G-Vingino-Blue were winners and For Fun VT won in Wiener Neustadt etc. In addition, Gaesbekers Glamor Girl was fourth at the World Championships in Lanaken for seven-year-olds, while Gogo Karla V won a ninth place there. Havanna and Hugo Boss were also in the top 10 of the Dutch championship for six-year-olds. Last year there was a fifth place for Julio for the four year olds and a sixth place for J'Adore Faya B.
Many champions neck-ribbons have been worn by his descendants: Gogo Karla V champion with the seven year olds, Idagonda became Dutch Champion of the 4 year old jumpers. In 2016 Flair was Dutch Champion of the 6 year olds. Florian was Dutch Champion of the 5-year olds in 2015. Ellexa de Nuit was Belgium Champion of the 5-year olds. In Turkey, Escudero was Champion of their 6-year olds. On the American East Coast Eddie Blue won the 6-year old Young Jumper Championship having also won the series for 5-year olds the prior year.
At the mare shows daughters of Zirocco Blue were showing off as well: Laconique DN was Reserve Champion at the Dutch Foal Championship. At the Dutch Mare Championship, Isambara placed 6th and Iney finished 9th.
In mare performance tests and IBOP, high scores were achieved: Galetto scored 85 points, Ilverna scored 86 points and Ielisa 81.5 points. Ely VDL received the highest IBOP score of 2012: 89 points.
Offspring successes translated into high prices at the auctions; VDL Dixi Blue sold for $100.000 in the WEF Sport Horse Auction 2016, and Fix Blue sold for €120.000 in the Dutch Sport Horse Sales 2015.
Zirocco Blue has several approved sons, such as Heineken UK VDL, Florian, Durango VDL, Golden Dream and many others.