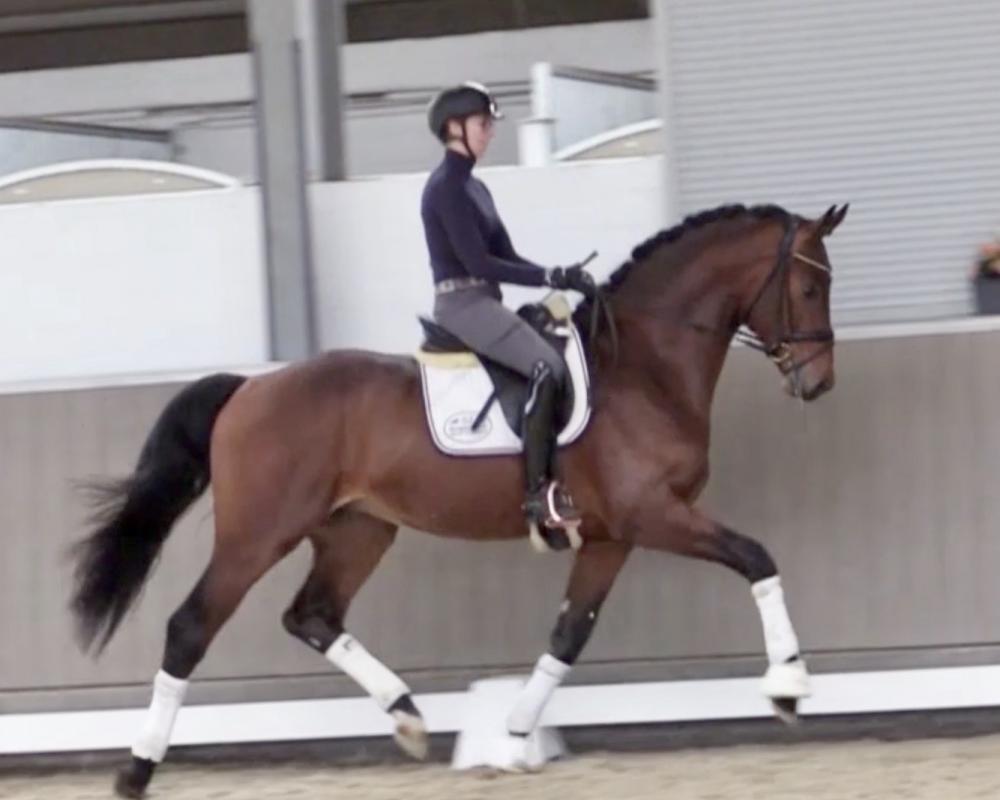 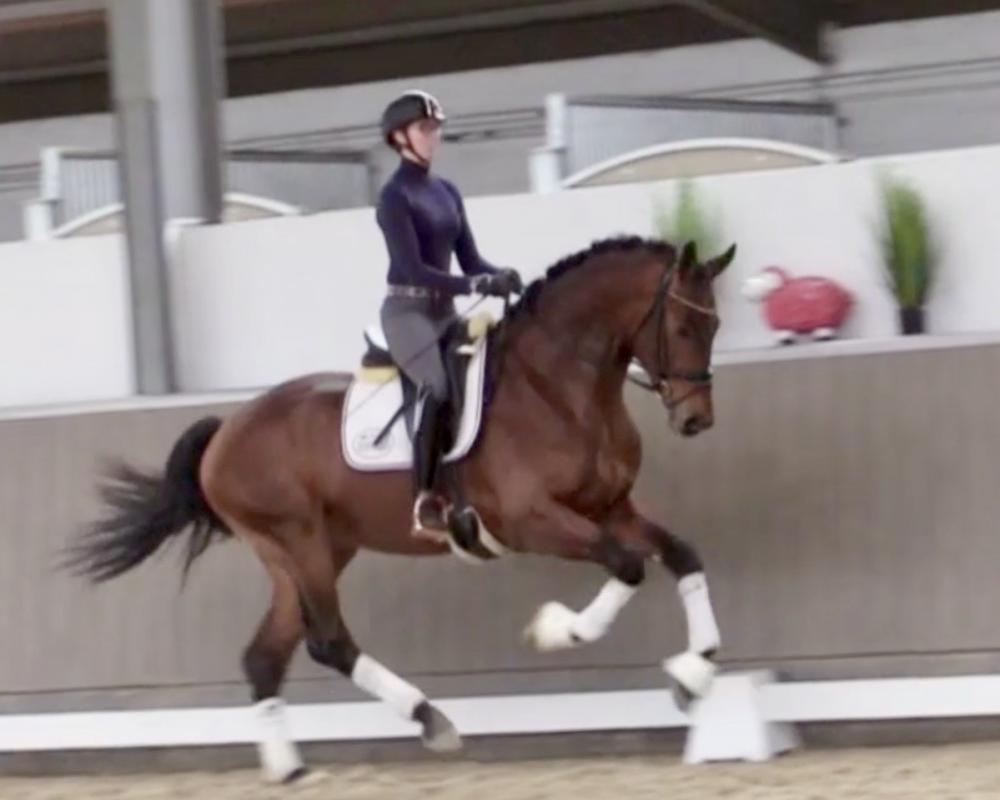 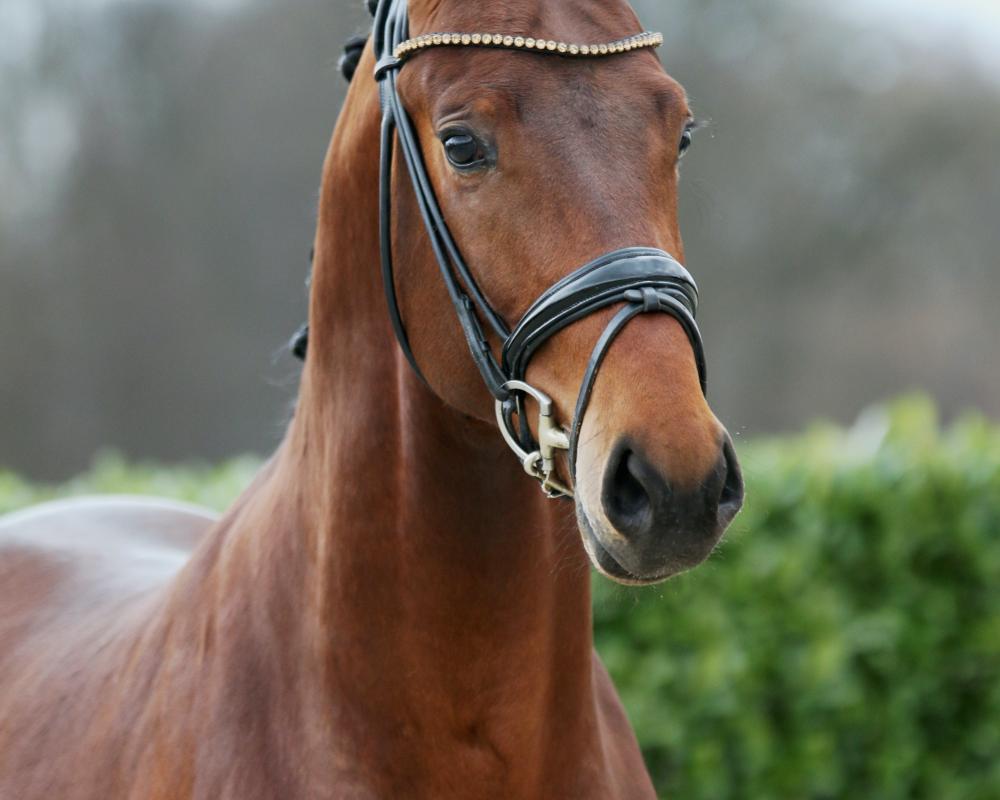 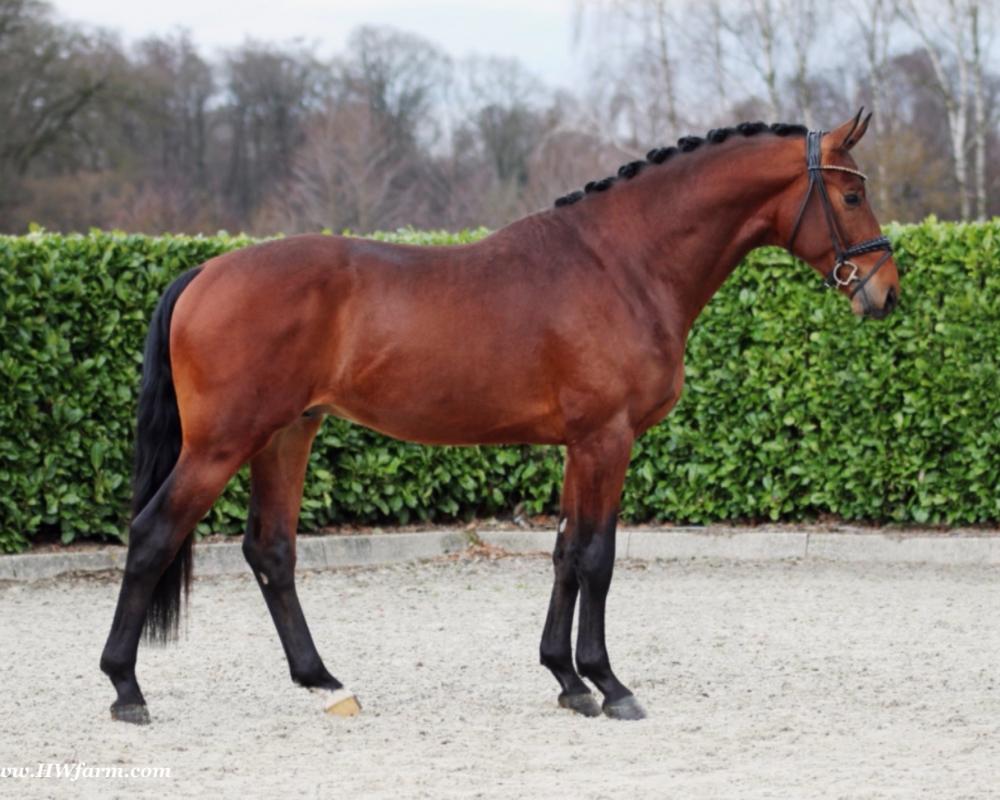 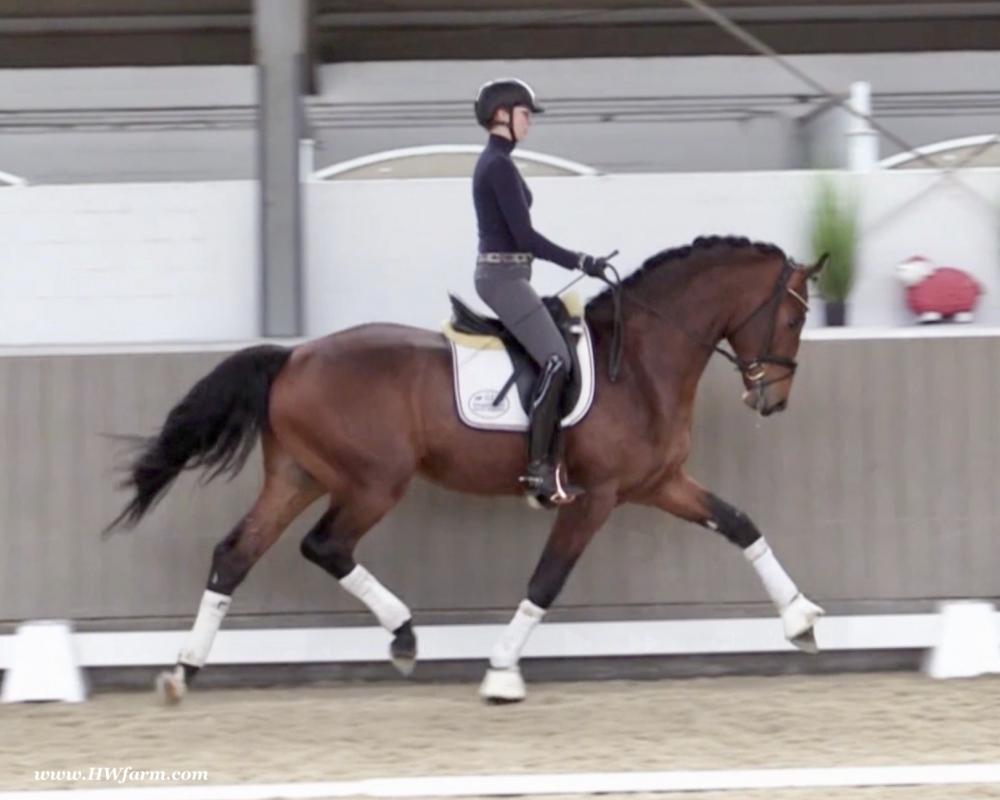 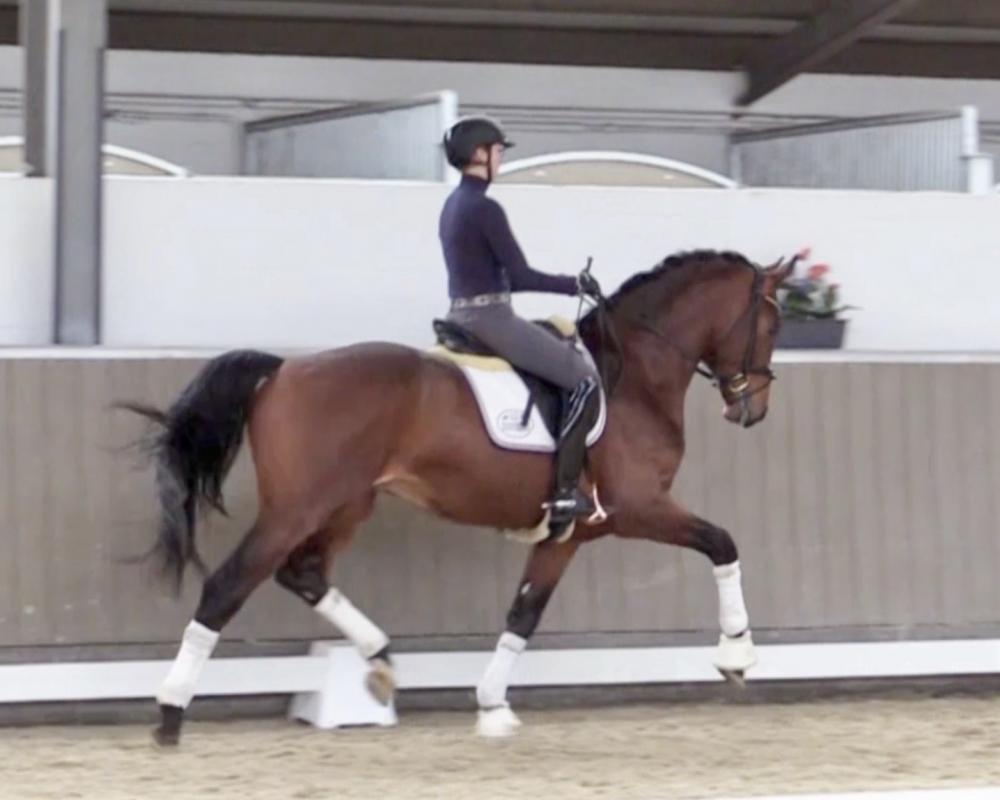 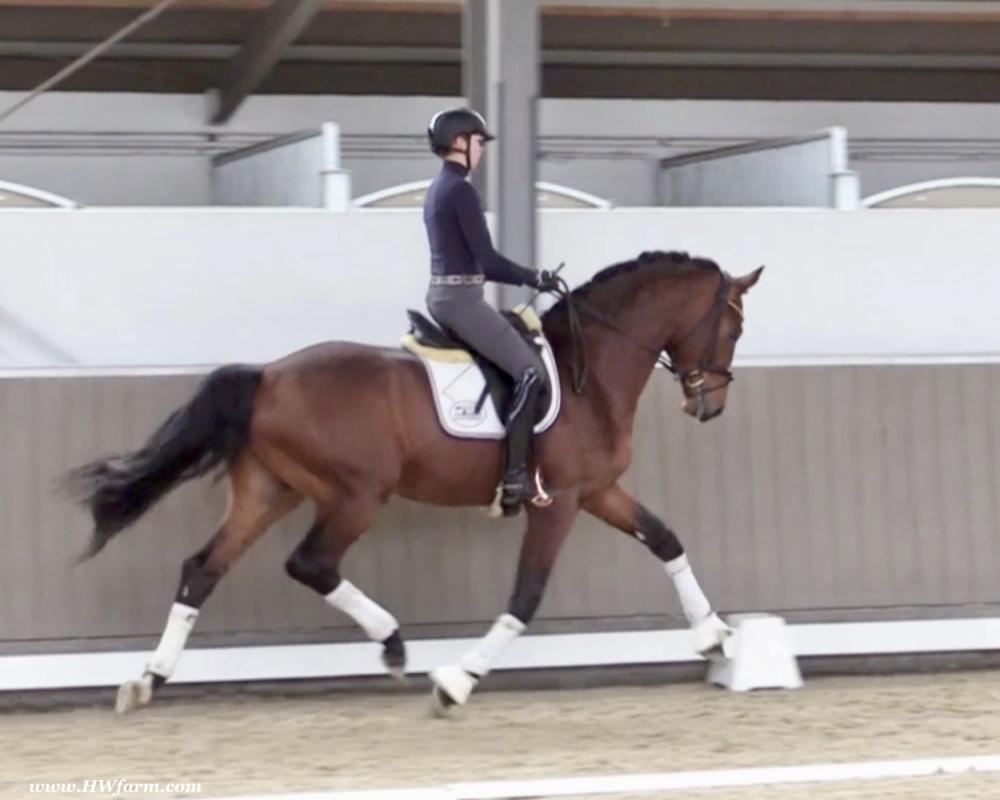 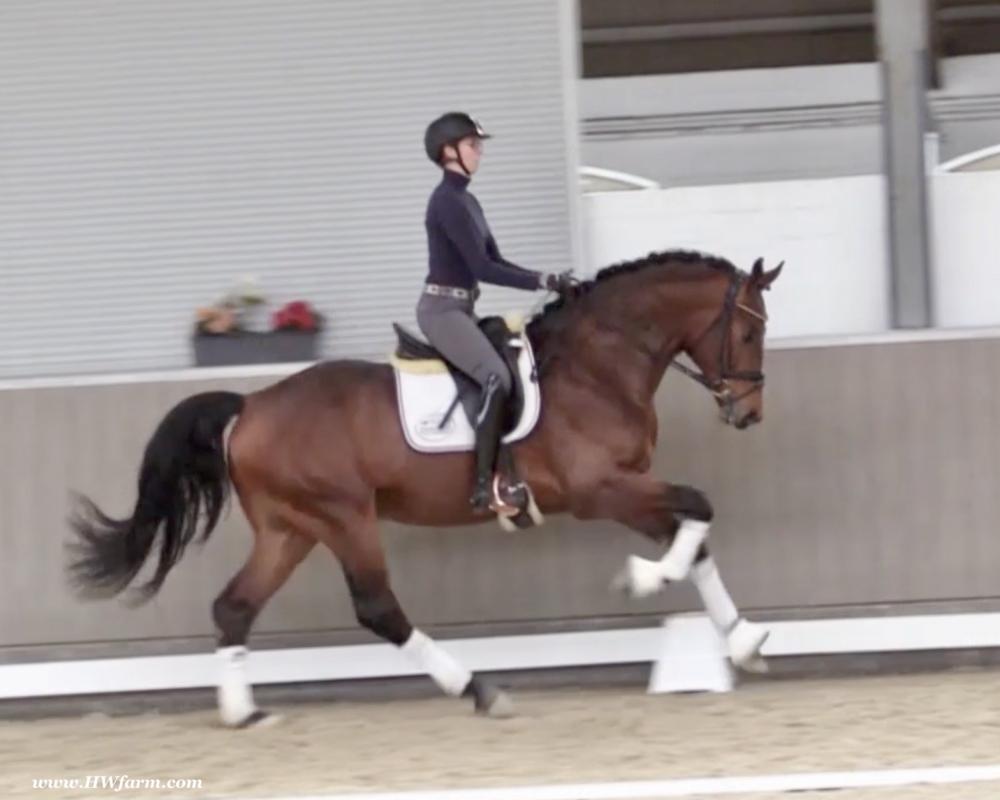 Dempsey HW looks like a clone to his sire D’Egalité (Don Juan de Hus/Stedinger).
D‘Egalité inspired as the most striking stallion of all licensings in 2015. Frenetically celebrated by the crowd, D’Egalité became undisputed winner of a a group of strong competitors at the Westphalian licensing in Muenster-Handorf.
In 2021 D’Egalité marched on direct course to a career in the grand dressage arena: D’Egalité celebrated several top placings in the qualifiers for the final of the Nürnberg Burg Trophy. Furthermore, the only eight-years old D’Egalité inspired spectators with two international placings in a group of strong competitors on the occasion of his international debut in the small tour at the CDI Horses & Dreams in Hagen a. TW. In total, D’Egalité collected 15 placings in advanced (S) level dressage classes in 2021.

The shiny black nobleman distinguishes himself with an inimitable elegance and grandeur. Three equally excellent basic gaits, long legs and modernity as well as the certain habitus of a capital dressage stallion round the overall impression perfectly. D’Egalité unites perfectly the spectacular action of movements through the Dutch genes with the strength of character, the well-framed top-line and the lovely temperament from Stedinger and Rohdiamant. As jewel in the crown D’Egalité is distinguished with an excellent walk as well as an exemplary rideability.

In breeding this noble black stallion convinces with extremely modern and powerfully moving offspring. In 2021 D’Egalité was sire of the mare D’Amour, who was price highlight at the Oldenburg Elite Auction in Vechta, selling for 260.000 Euro. Furthermore, he presented a licensed son named Der Edelstein at the DSP licensing.

The dam’s sire Stedinger was the striking Champion Stallion at the Oldenburg licensing and became first Reserve Champion of the main premium. Stedinger himself competed successfully up to Inter I classes and produced 39 licensed sons as well as 50 advanced (S) level dressage horses, including the international Grand Prix winner Spirit of the Age OLD/B. Brune.

Rohdiamant, found in third generation, was serial winner in the international dressage arena under Lisa Wilcox. In total, the R-line is well-known for fantastic rideability values.

On the maternal side D’Egalité originates from the famous Oldenburg dam line of Egale, which is also well-known for numerous licensed stallion such as the 2013′ Oldenburg Champion Stallion Don Deluxe by De Niro, Grand Prix horses like London Eye OLD/S. Kruse as well as many Elite Broodmares.

Dempsey HW’s dam is the multi tasking stallion Satisfaction, he is the son of Stakkato, who won the National Young Horse Championships twice, as a 5 and 6 years old with fairy-tale scores of up to 9.9. In the years that followed he continued his sporting success at international level with Eva Bitter. He won the German Championship twice, as well as a number of Grand Prix’s and several Nations Cups. Satisfaction’s dam Cecile was named Hanoverian Broodmare of the year in 2010. A worthy and sought-after award.
Satisfaction l impresses day after day with his constant performance curve and superior jumping ability. This Stakkato son already has top placings in a number of Grand Prix (incl. Hagen, Balve and Paderborn) with Eva Bitter. Following his Grand Prix victory at the German Classics in Hannover 2010, he moved from the National Stud in Celle to the Beerbaum stables at Riesenbeck. Ridden by Ludger Beerbaum and Marco Kutscher he achieved further international successes in 2011. His second place in the DKB-Riders-Tour in Paderborn and top placings in Rotterdam (NED), Estoril (POR), Rome (ITA) and Valencia (ESP) have clearly confirmed the exceptional sporting ability of this world class stallion. As an acknowledgement of his successes, Satisfaction l has been awarded the suffix FRH to his name by the Hanoverian Verband - he is now listed in the studbook as Satisfaction l FRH.

Dempsey HW, is just like ordered:
Amazing looks, chiseled, super pretty, small head,
he could probably drink out of a tea cup?
That muscular stallion neck, yes - he is a gelding,
his movement and talent, make him the total package.
He will catch your attention with his beauty and elegance.
He is a true eye candy, smart and collection comes super easy to him,
lateral work, piaffe/passage, will be a blast!

He has three fantastic, rhythmic gaits, stellar cadence,
amazingly easy to ride, very lofty and uphill, lots of air time,
with a steady and stellar hindleg, reaching far under him.

This boy is super impressive with his stunning, free shoulder, sensational trot movement, expressive canter and swings always nicely through his body,
easy and fun to sit for everyone.
His walk is always rhythmic, no matter if collected or extended walk.
Everybody will love him, the judges and the audience alike will be excited to see him.

Perfect for an Adult Amateur, Professional or Young Rider.
This is a horse, with a very big heart. Worked intensively in hand and on the longe line, as he was prepared and represented at the 2021 stallion licensing.

He's looking for his life partner to go out, have fun and compete.

He gets along well with other horses, loves human attention, wants to be in your pockets all the time and thrives for his personal grooming time.
Loads and bathes, goes in the hot walker and is pleasant all around as well as a super partner. He is ready to go to his new owner and impress with his looks and potential for the upper level.
This boy will go his way up the levels with ease and fun, hopefully you will be the one guiding him there.
Dempsey HW will enable you to fulfill your dreams with all his sensational abilities,
he will collect all ribbons with ease, high point and more, here we come.

The goal of HW Farm is, to offer highly talented young horses in Germany
for riders in the USA and all over the world.

Please find all info and other top quality horses for sale at www.HWfarm.com