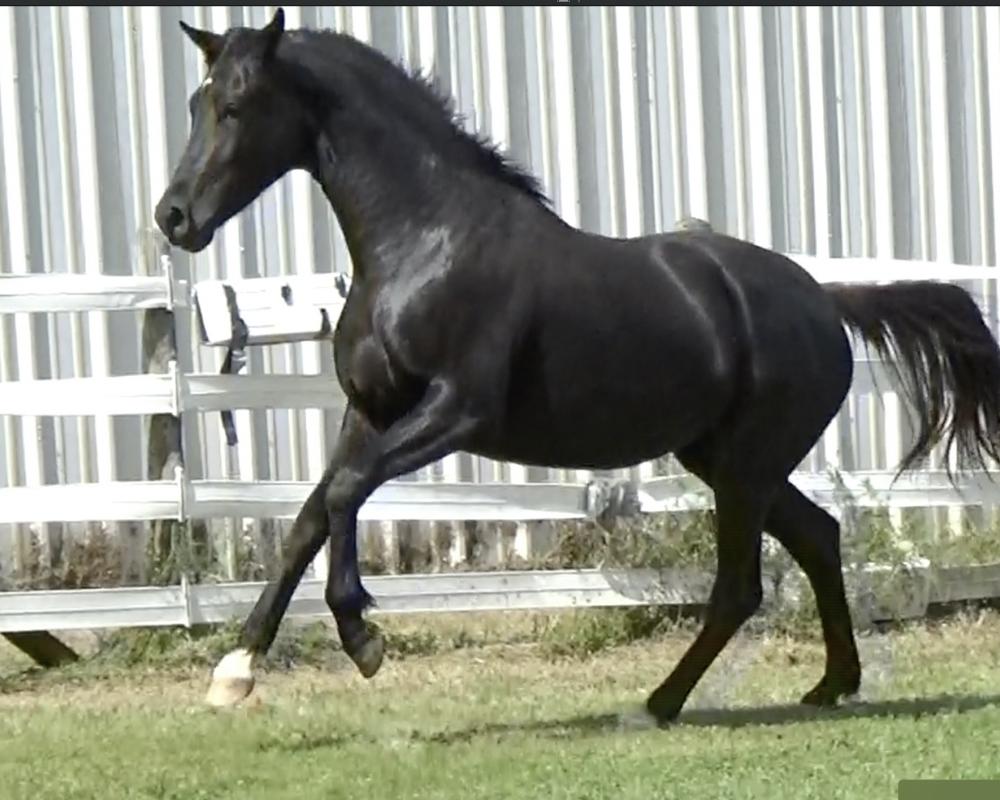 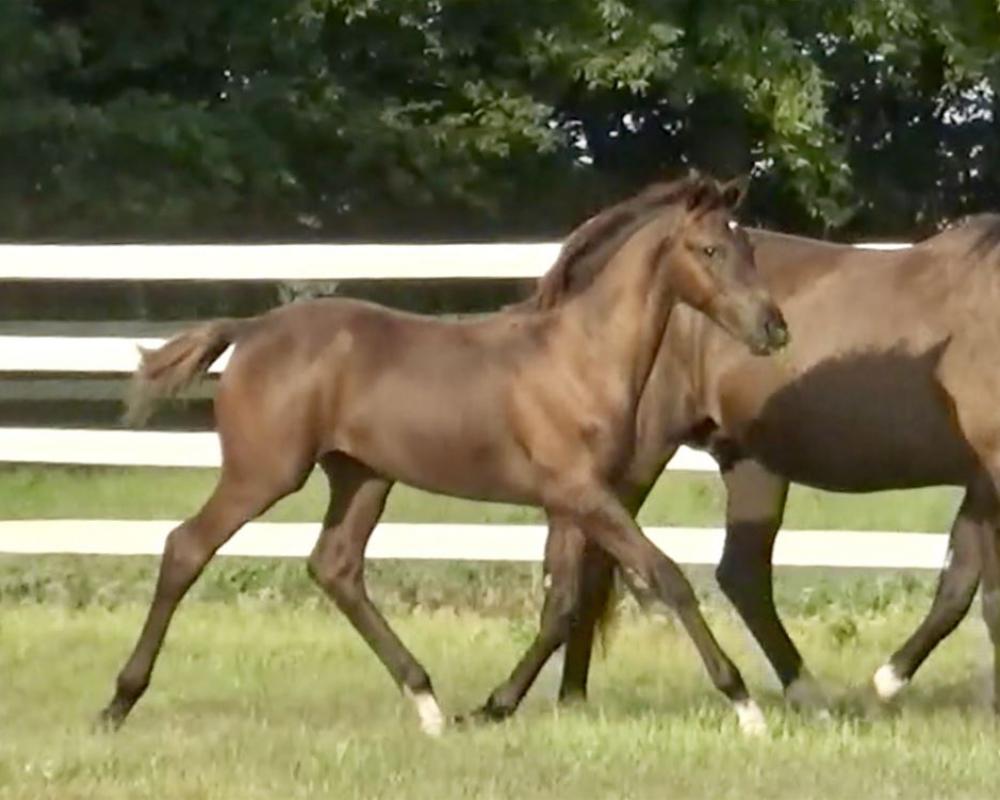 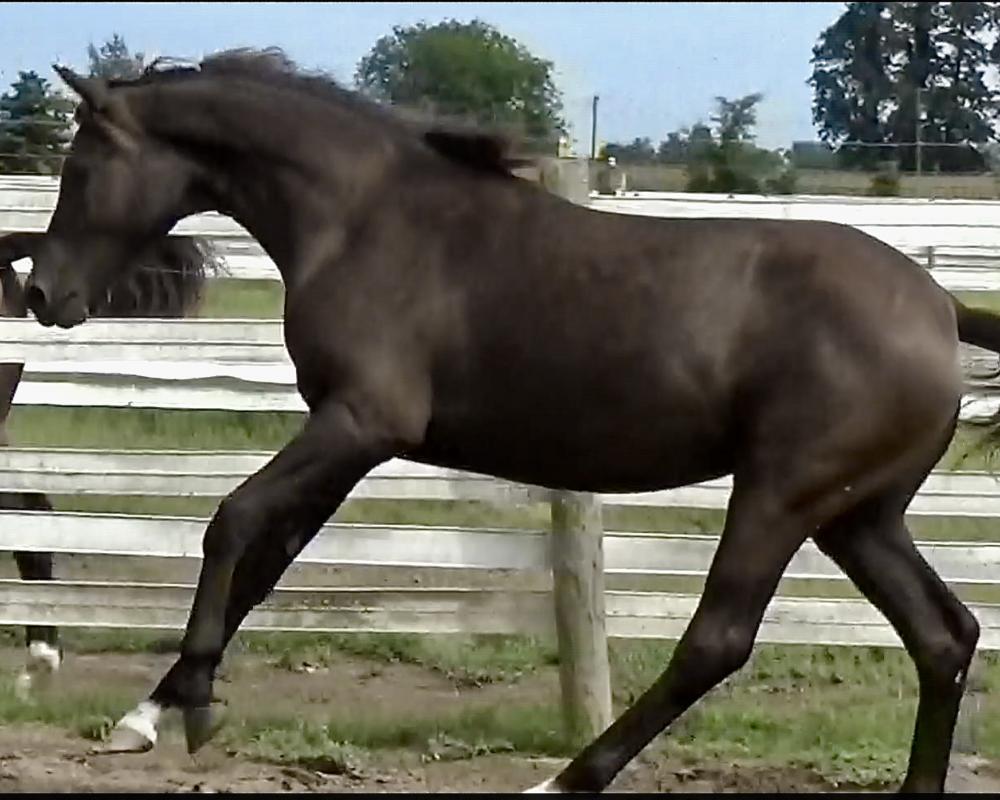 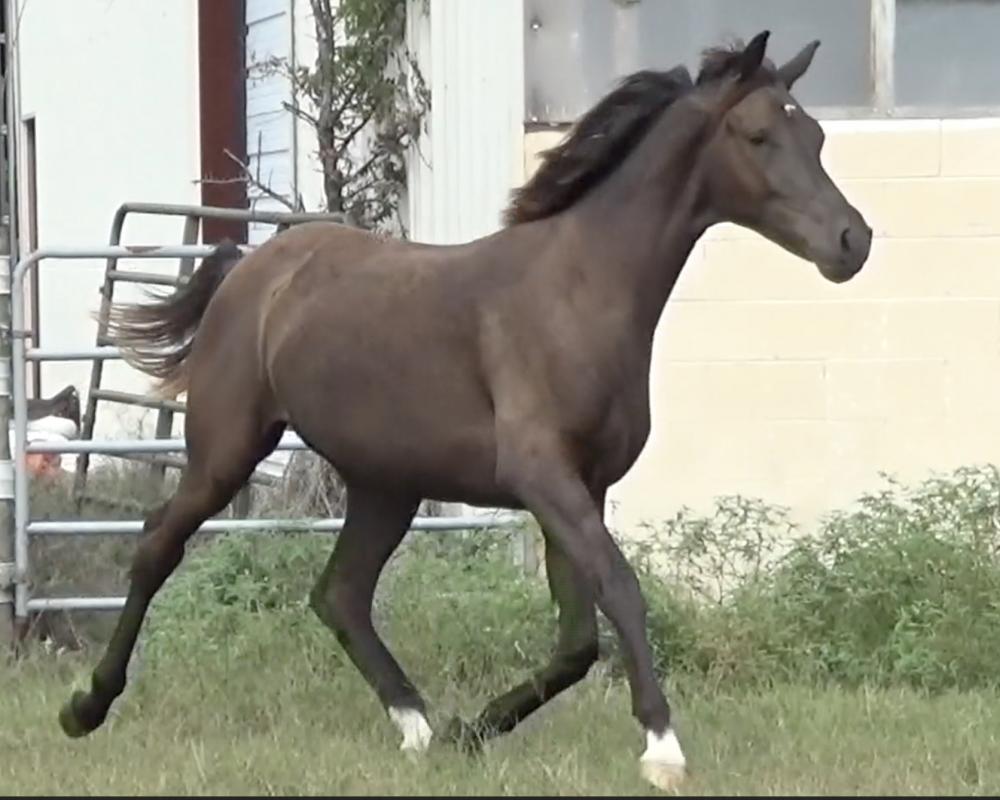 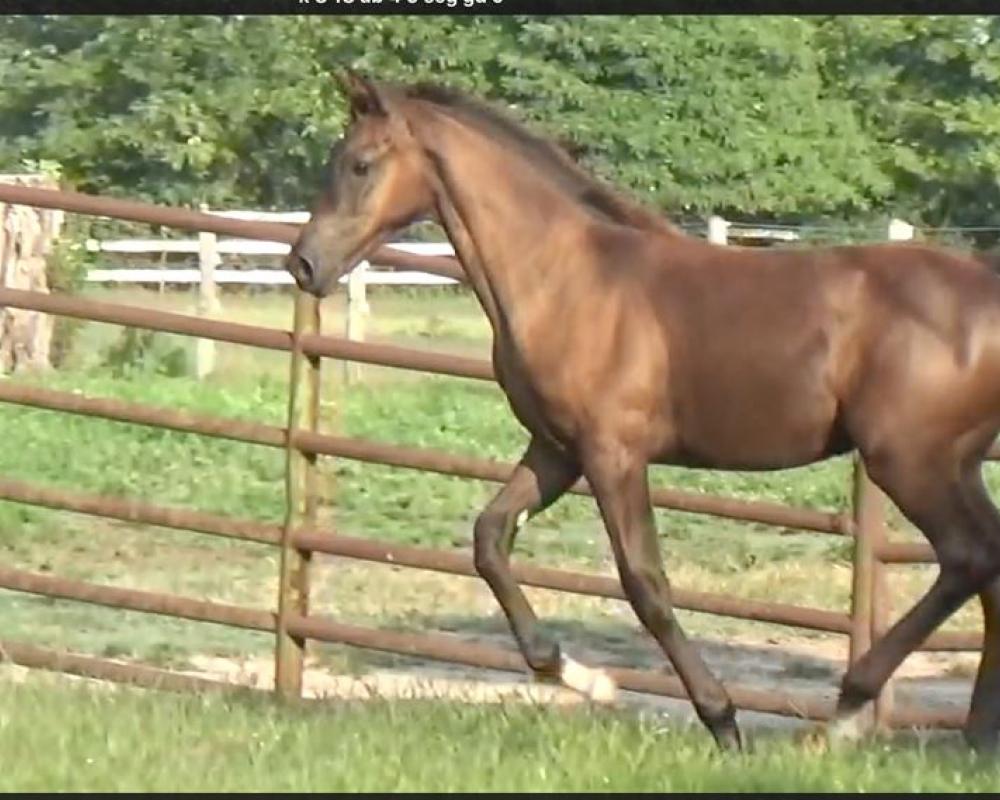 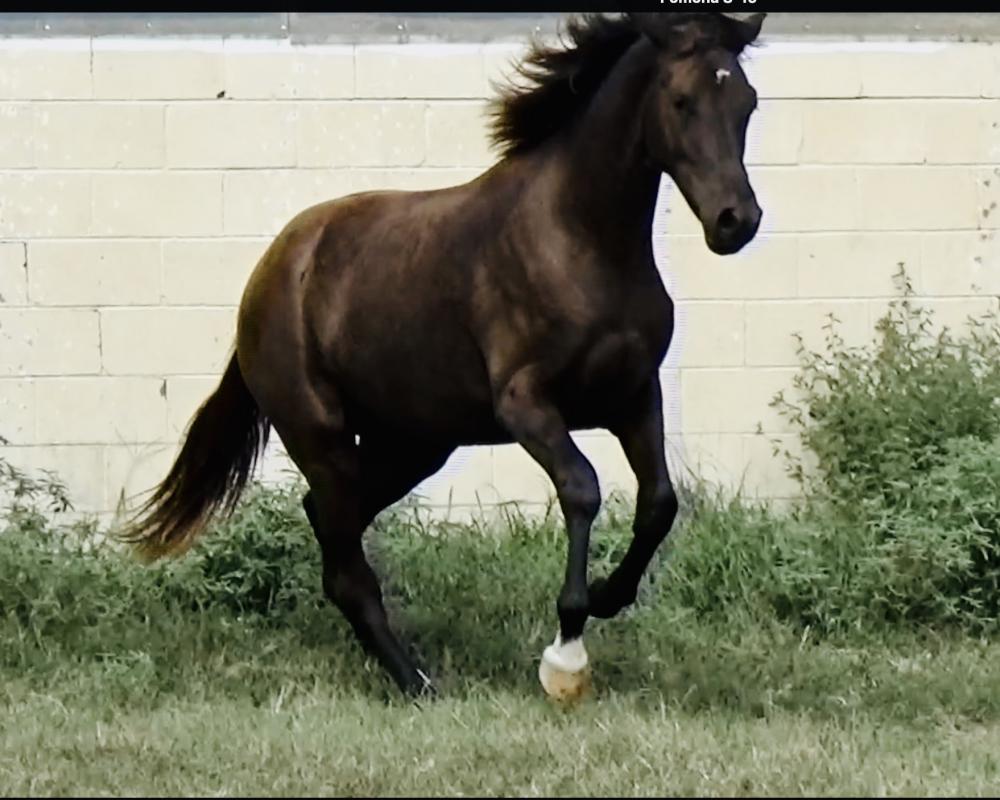 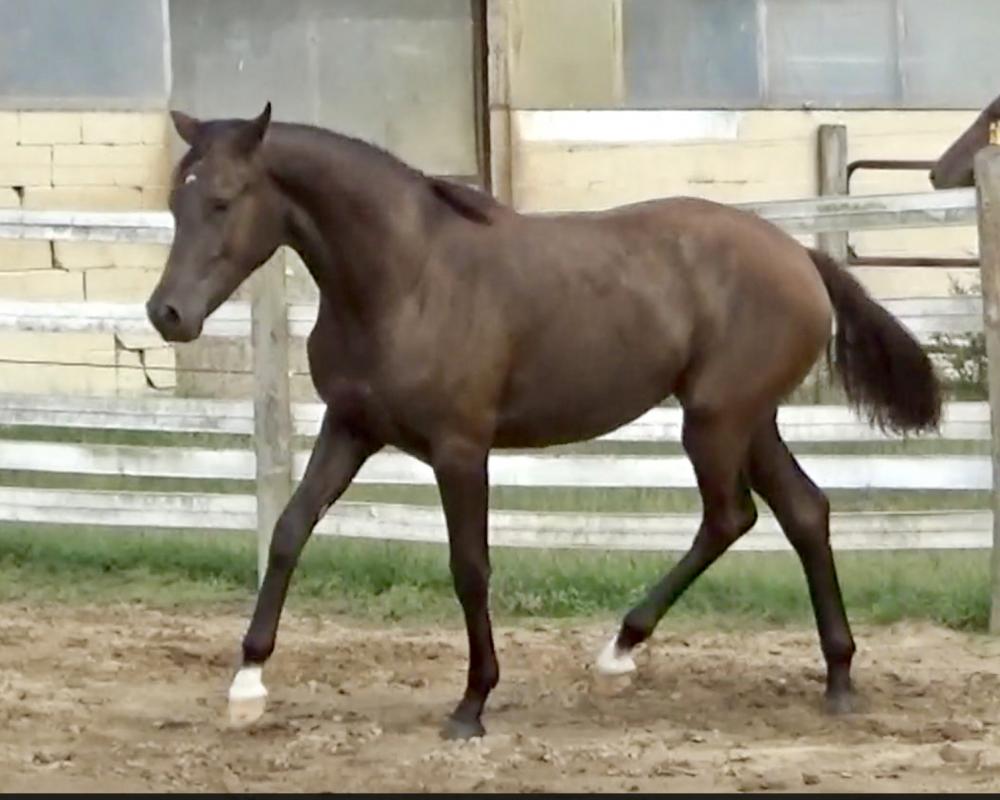 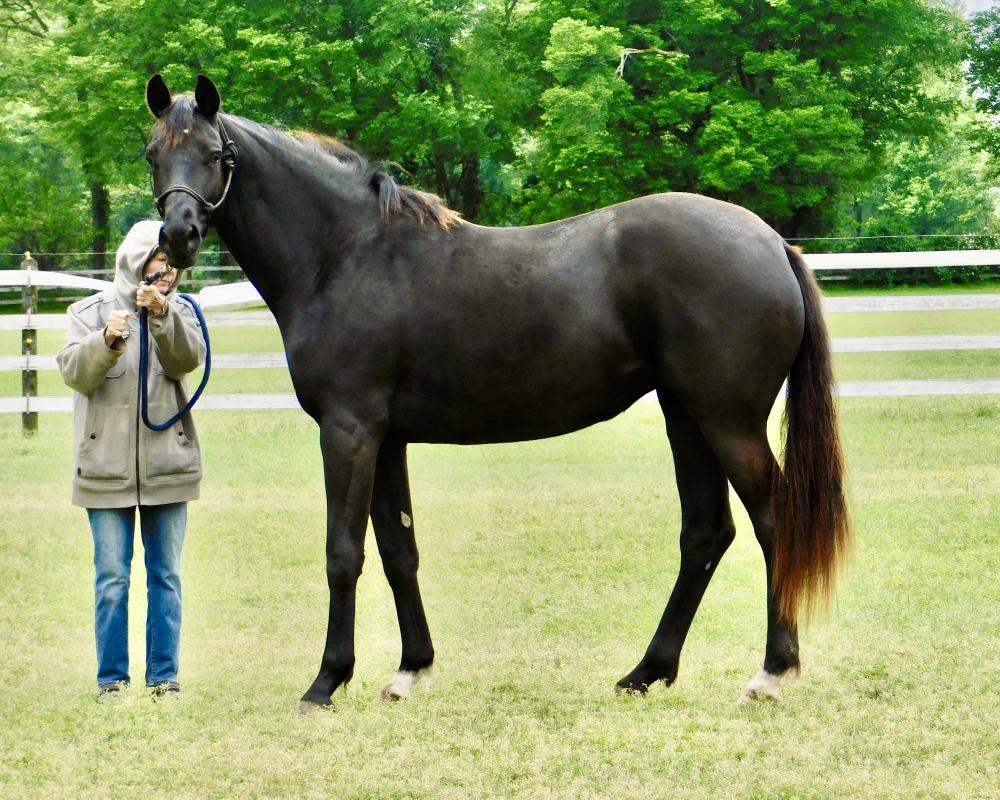 Anglo-Arab;Burnus’ most famous son was Habicht, out of the big black mare Hallo, who herself had a very successful career as a sporthorse in north Germany. Habicht was said to be unattractive and lanky as a two year old and barely passed inspection. But he went on to win his 100-day performance test and become one of the best three-day horses Germany has produced in modern times. Two injuries to his rider, Martin Plewe, both unrelated to Habicht, were the only factors that kept him from the 1976 Montreal Olympics and the 1978 World Games in Lexington. They won the CCI*** at Achselschwang and in 1977 were the best German pair at the Burghley CCI****. Habicht died after a freak injury and leg fracture soon after his 25th birthday. He has established a most prominent warmblood eventing dynasty in the world, mainly through his sons Windfall, Sixtus, Parforce, and others. His descendants are known like a mantra in Germany. All sports are represented. The most prominent young dressage horse in Germany until her tragic accident recently, Renaissance Fleur TSF, was a strongly Habicht-influenced descendant. Here in the US, names like Martini, Peron, Livius, Feuertaenzer, Stiletto, Mahon, San Remo, Sonset's Sieger, Sinatra, and many others are familiar.
Habicht was often used as the ideal jumper model in demonstrations in Germany, noted for his perfection in front leg elevation, willingness to jump, and bascule.
"Habicht" won the 1977 Central Stallion Show at Schwaiganger, and came in 1st in the International Three-Day Event at Achselschwang. He achieved numerous other victories and placements in eventing competitons up to the advanced class.

From The Trakehners Strike Back Pt.1 The%20Trakehners%20Strike%20Back:%201%20buddenbrock%20habicht%20axisThe%20Horse%20Magazine
By far the most important among Habicht’s sixteen graded sons is Sixtus. An eye-catching black standing at 16.1 hands, his career started at the grading where he was awarded a premium and was named best jumper of the year. As a six-year-old Sixtus went into training with Gilbert Böckmann who qualified him for the World Young Jumping Horse championships in Zangersheide.
With a total of more than 50 placings in 1.40 metre classes and four wins, Sixtus is something special in the Trakehner breed. His jumping index based on the scores the offspring received at mare inspections, horseshows and gradings is 138 points – no other Trakehner stallion was able to come close to that in the past decade. Sixtus seems to know of his outstanding position – he’s a male diva so to speak.
Sixtus sired Altefled’s Rob Roy who after winning the Bundeschampionat is now on his way to the top in German eventing, already winning regional championships.
Axis is another son of Sixtus who was accepted by the Hannoverian association after finishing a very good performance test in Neustadt/Dosse. This black stallion, who is owned by British pair Sean and Marc Reade of Bluewood Trakehners, was the best jumper of his grading and it was his son Hirtentanz that won this title in 2005 – no doubt this Trakehner is the complete opposite to every prejudice one may have against Trakehners. Not a real beauty this colt jumps like a Holsteiner, the kind of a horse you can easily imagine to meet as “Eurocommerce Hirtentanz” in any class of an international show.

Eventing
Beginning with the lower levels, we have TUPELO (Baron Verdi x Thabana*M*/E.H. Buddenbrock), bred by New Spring Farm and owned and ridden by Maddie McElduff! The pair is competing in the new Modified Division, which is designed to bridge the gap between Training and Preliminary. They ride Dressage Friday at 1:30 pm, and run Cross Country Saturday at 3:58 pm. Good luck!!!!
In the CIC***, we have two Trakehners to watch, TSETSERLEG and BENTLEY'S BEST.
TSETSERLEG*Pg* (Windfall*Pg*E* x Thabana*M*/E.H. Buddenbrock), bred by New Spring Farm, owned by Christine Turner and ridden by Boyd Martin, is better known as Thomas to his fans! The pair enters the Dressage ring at 10:08 am and runs XC Saturday at 2:15 pm! Good luck!!!
For our Canadian fans, we have BENTLEY'S BEST (Hirtentanz x Baronesse XIII/Eichendorf 7), owned by Don Good and ridden by Jessica Phoenix! The pair ride their Dressage on Friday at 12:48 pm and run XC Saturday at 2:55 pm! Good luck!!!
Palma Nigra *E* was ATA Elite and Honour Roll Mare, Gerda Friedrichs Award recipient and Sportshorse Show Overall Grand Champion.
Palma Nigra's dam was German Federal Trakehner Show first prize winner and Verband Premium Mare Passarge II by – Insterruf. Passarge's own dam was Dr. Schilke's famous Verband Elite Mare Palma, the German Reserve Supreme Grand Champion mare, dam of an approved Verband stallion and an Open jumper winner. She is from the great mare family Pelargonie/Trakehnen, one of the most successful ones in the sport, producing Olympic horses like Peron (Dressage Bronze Atlanta) and Partout (member of Dutch dressage Silver team). Palma Nigra herself was only shown once in hand herself and finished up as Trakehner Grand Champion and Show Grand Champion of the Sporthorse Breeders Show 94 Montreal-Blainville, winning the title against a well-known imported Holstein stallion.