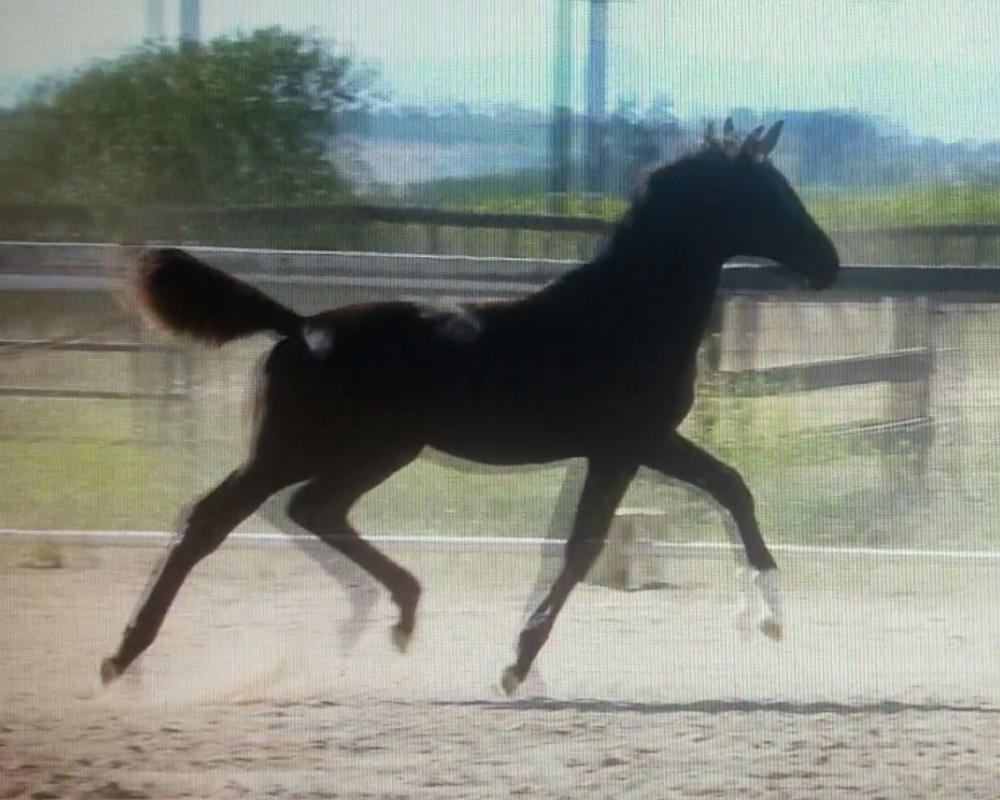 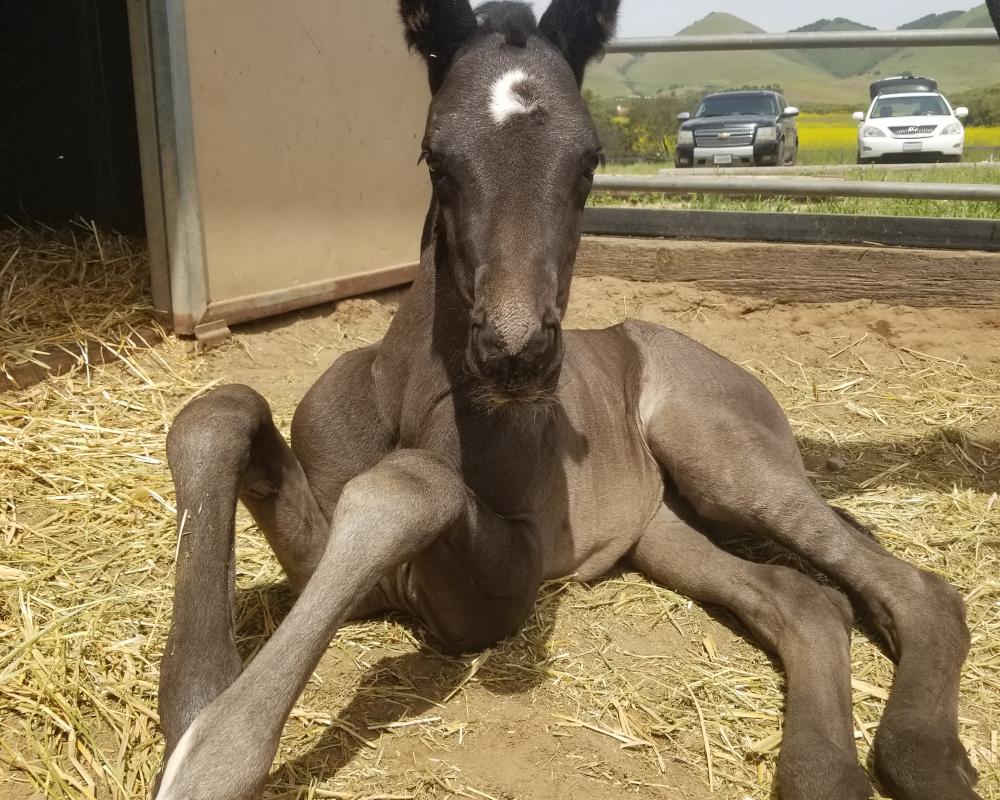 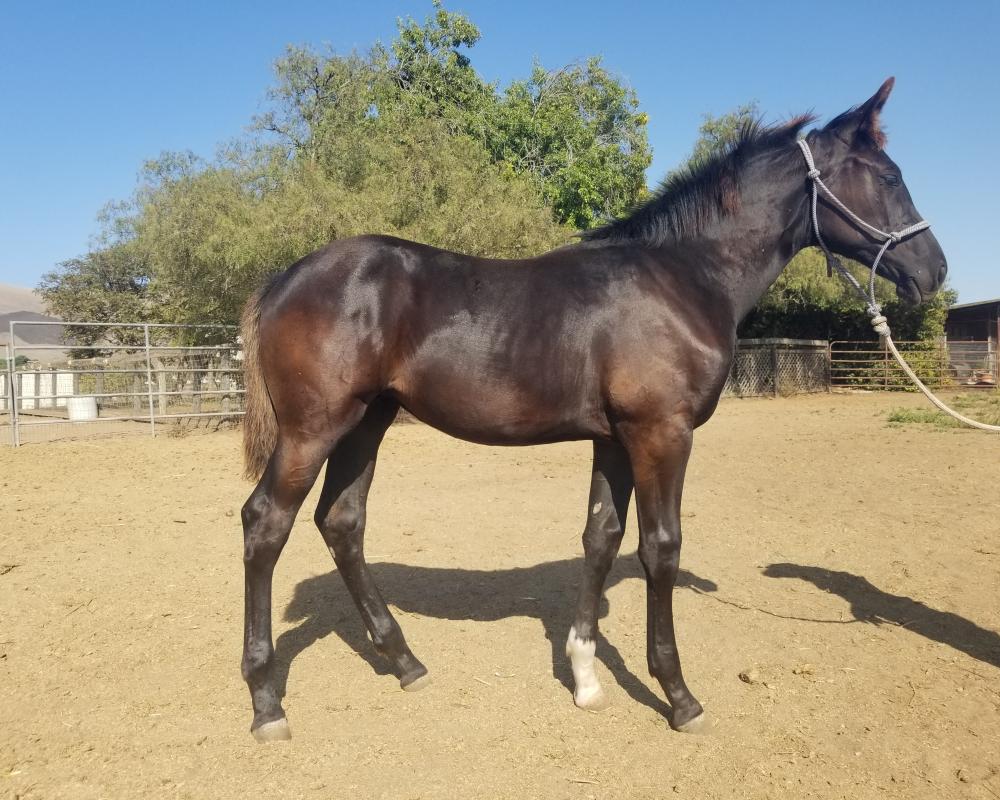 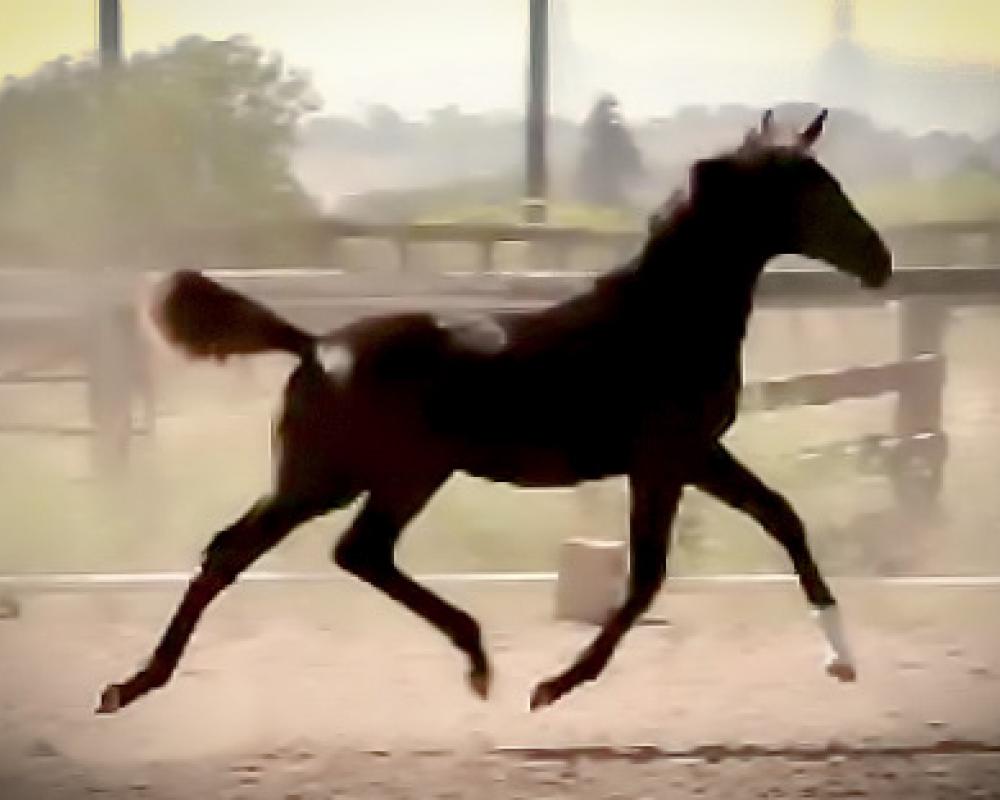 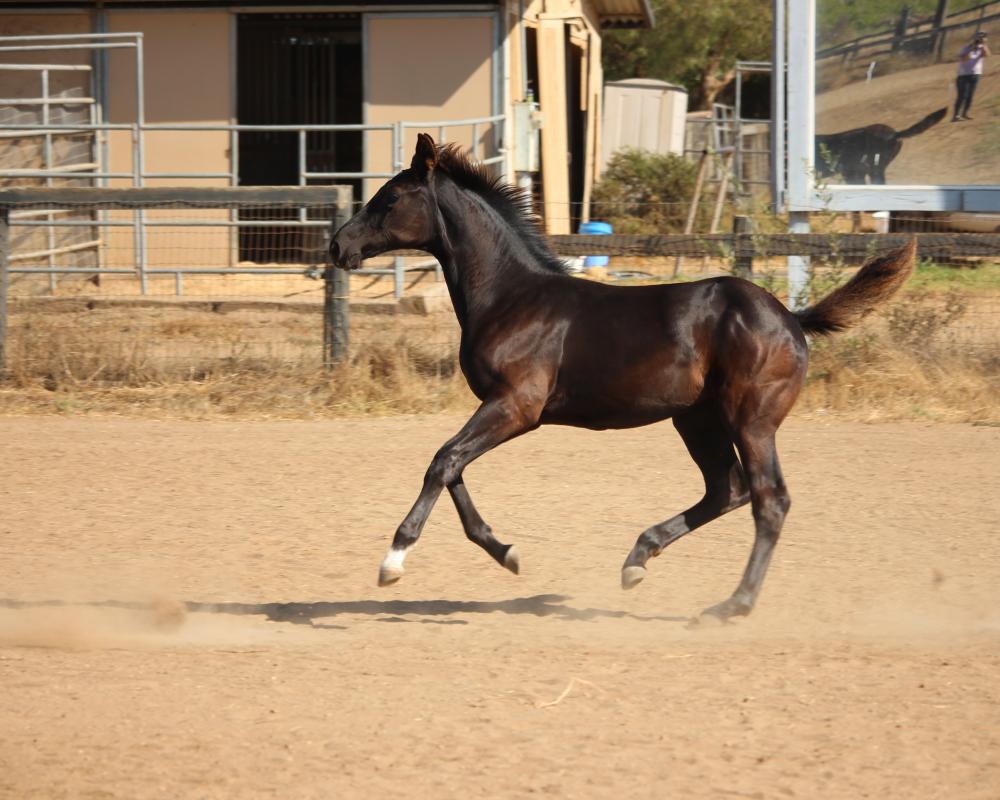 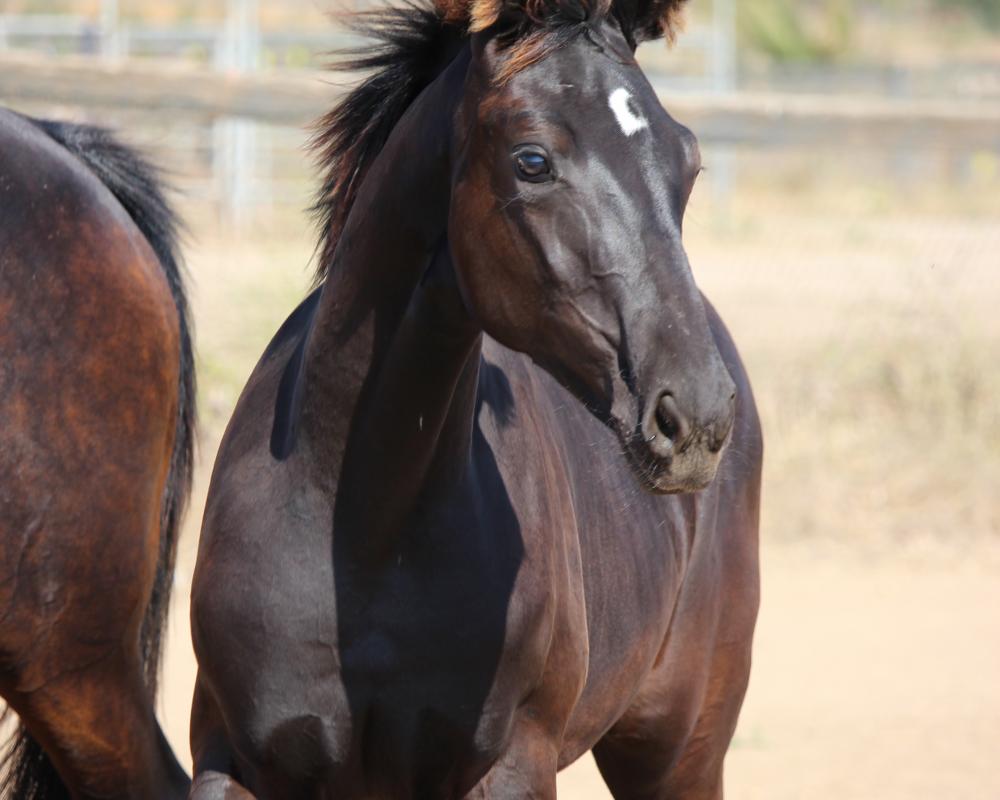 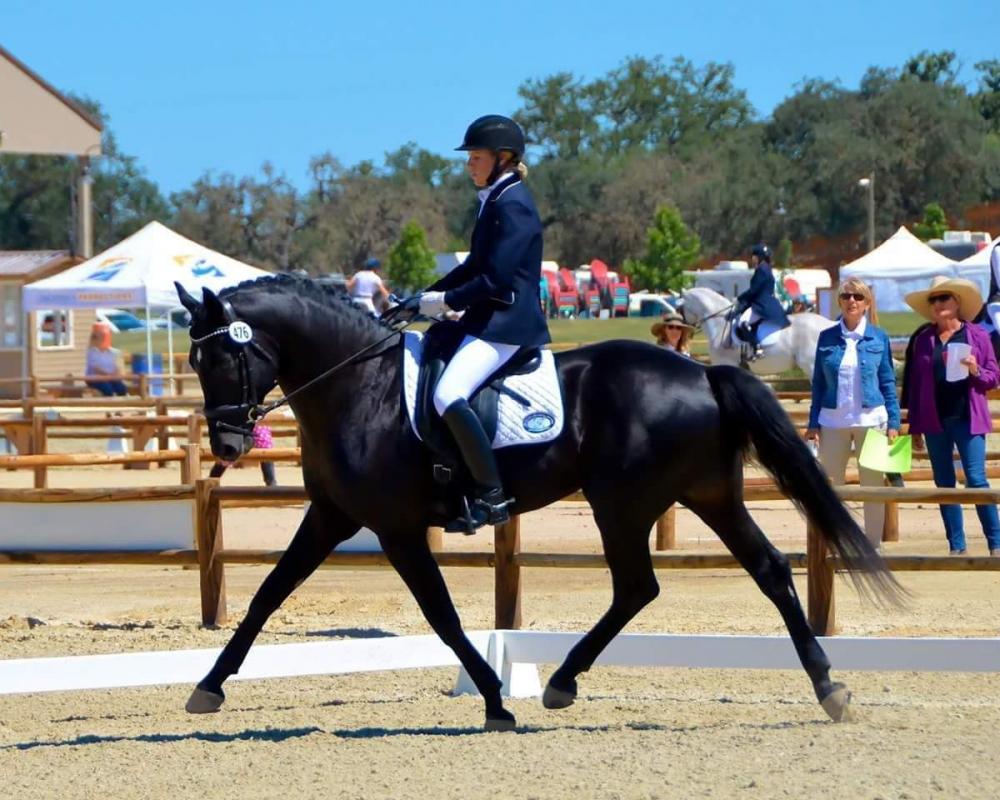 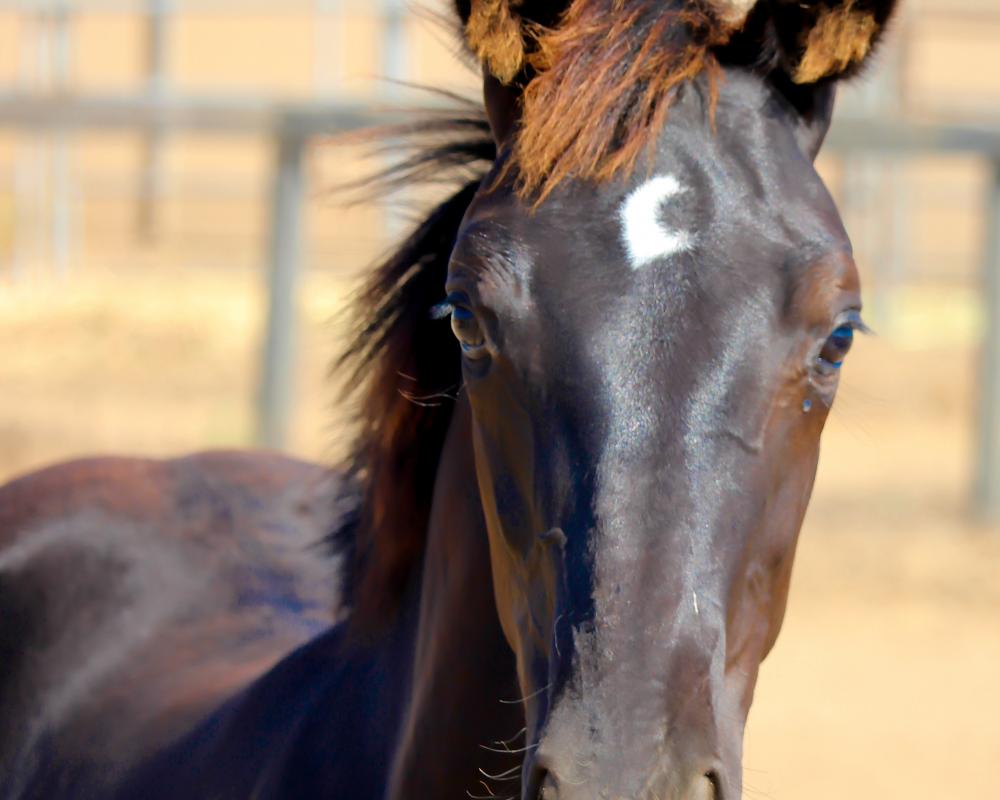 Finesse has a lot to offer. She has her sires suspension in her trot, a super ground covering walk with huge over stride, and an uphill canter. She has an active hind leg and freedom in the shoulder, with a very nice neck line. She has good conformation and excellent hooves. Finesse is as sweet as they come. She has a very kind natured personality. Has been handled and imprinted by professional trainers since birth. Finesse leads, ties, loads in the trailer, is familiar with grooming, washrack, etc. Has been trimmed regularly since birth. She has been imprinted and desensitized with many objects and exercises. She is easy to teach and has the kind of personality you'd want in a sport horse. She doesn't nip, and has no bad habits. A talented filly all in all with nothing left to desire. Both her sire and dam excel in dressage too. Weaned and ready for her new owner!

Finesse's sire, Fiderello, has world class gaits and his rideability is excellent. He is a modern type dressage stallion, with a short coupled body, long legs, good neck line with an open throat latch, and gaits to amaze even the biggest critics. His trot is a "WOW" trot. Tons of suspension, and he just moves so freely with a supple way of going with natural impulsion and rhythm. He has excellent balanced hooves with strong walls. Fiderello was a premium colt at his foal inspection. The inspectors commented on his ground covering gaits that are over the back and through the body. Fiderello is a Champion time and time again. As a 2 year old, he won the 2014 USDF Region 7 Dressage Sport Horse Series Final with a 77.6%. In 2016 He won it again, in the stallion division, with a 78%. In 2017 Fiderello earned scores to 83.5% in the 5 year old Materiale classes, as well as becoming 5 year old CDS Futurity Champion with a 73.9%. He was also Grand Champion at the 2017 CDS/USDF Championships with a 77.7% for his First Level Freestyle performance. He took the 2017 USDF First Level Freestyle Championship too with a 76.7%. Fiderello and his rider, Karen Cornelius, are training for a spot on the US team to represent at the Olympics, Pan Am Games, World Equestrian Games, and World Cup. A quote from their coach, Conrad Schumacher: "If I had a mare, I would breed her to this stallion." and... "I knew I liked this horse, but now I REALLY like this horse. He is very special." He passes on his suspension, long legs, good conformation and easy to work with character in his foals. Finesse is the daughter of a legendary stallion in the making.

Fiderello is by the legendary Fidertanz (Fidermark x Ravallo). Fidertanz was the top star of the 14th Westphalian stallion licensing in 2004. With standing ovations, he left the arena and became champion stallion. His exceptional basic gaits, brilliant jumping manner, balanced nature and perfect conformation hasn't given rise to any doubt about this victory. Fidertanz was Champion Stallion of the North Rhine-Westphalian stallion licensing, winner of his stallion performance test, Vice Bundeschampion, and Main Premium Stallion. Fidertanz-offspring have been sold for top prices at the auctions. He presented the winning colt at the German Foal Championships in 2008, and Fifty-Fifty, one of his daughters, was highly placed in Lienen in 2007. At the age of three, Fifty-Fifty became the Brilliant Ring Champion of the Elite Oldenburg Mare Show in Rastede. More than 30 Fidertanz-sons have been licensed, among them the North Rhine-Westphalian Champion Stallion and competitor at the Bundeschampionate, Flanagan, as well as the 330,000 Europ top-priced auction horse, Feuerspiel. Many offspring placed in finals of the Bundeschampionate, among them Fairytaile who qualified for the German team for the 2011 FEI Dressage Horse World Championships. More than 100 Fidertanz-offspring from his first crop of foals earned successes in riding and dressage horse ability competitions. Fidertanz's sire Fidermark won the stallion performance test, was National Young Horse Champion, winner of the Optimum and Grand Prix tests. His dam sire Ravallo also won the stallion performance test with a total index of 155 points (dressage 157.52 points – 1st range, jumping 127.7 points – 5th range). Frühlingstraum II has been regarded as one of the pillars of the Westphalian breeding. With Romadour II Fidertanz has been inbred three times to the famous Ramzes x. Fidertanz’ dam, grand dam and grand-grand dam were state premium mares. Lots of approved stallions and highly successful sports horses derive from this damline.

Finesse's dam, Ringe, competed in Novice Level Eventing, winning nearly every event she entered. She'd consistently score in the 20's (70%'s) in her dressage tests, and was ridden by an amateur. Her rideability, easy to sit trot, and pillow-like canter were highlights for those who have had the pleasure to ride her. She has a puppy dog like personality and is a quality broodmare. She has produced one other foal, a colt by Sandro Hit, whom is exceptional himself.

Finesse has a pedigree bred for success. You can't go wrong with this exceptional filly. Be the first to own one of Fiderello's foals!