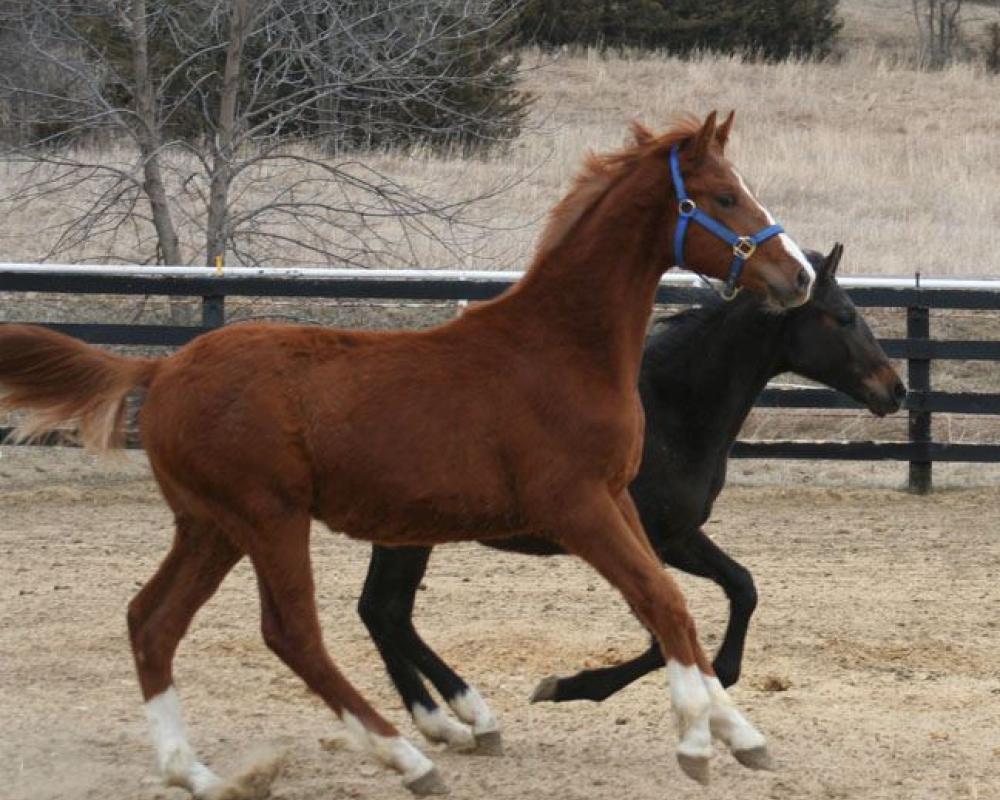 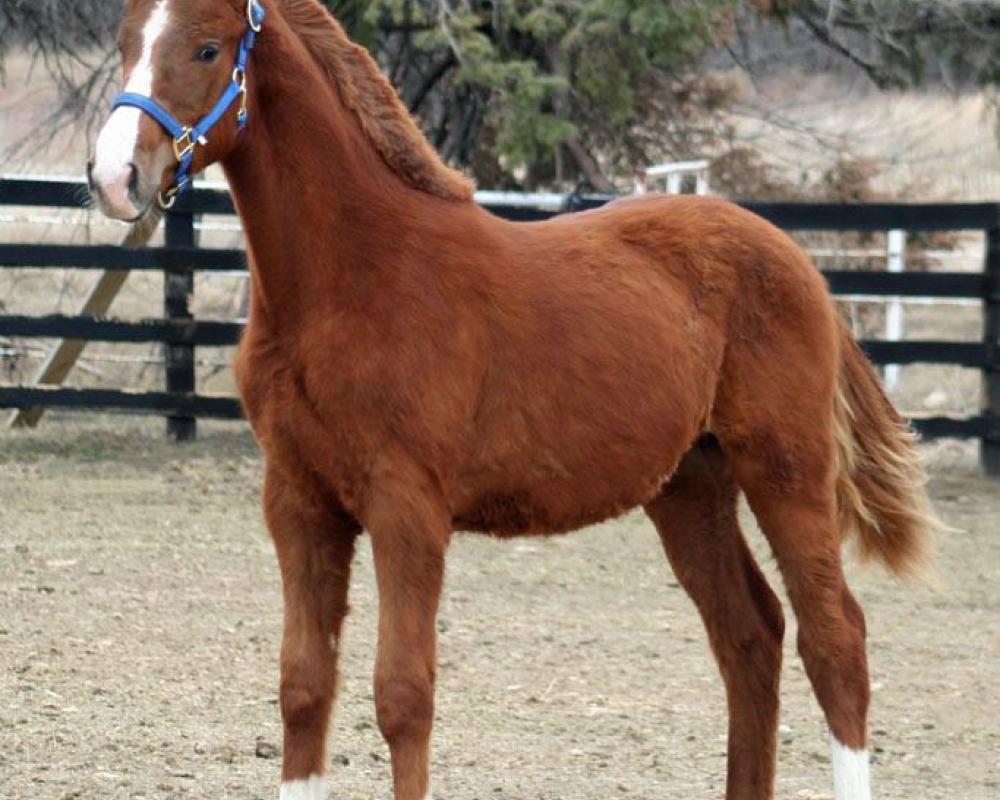 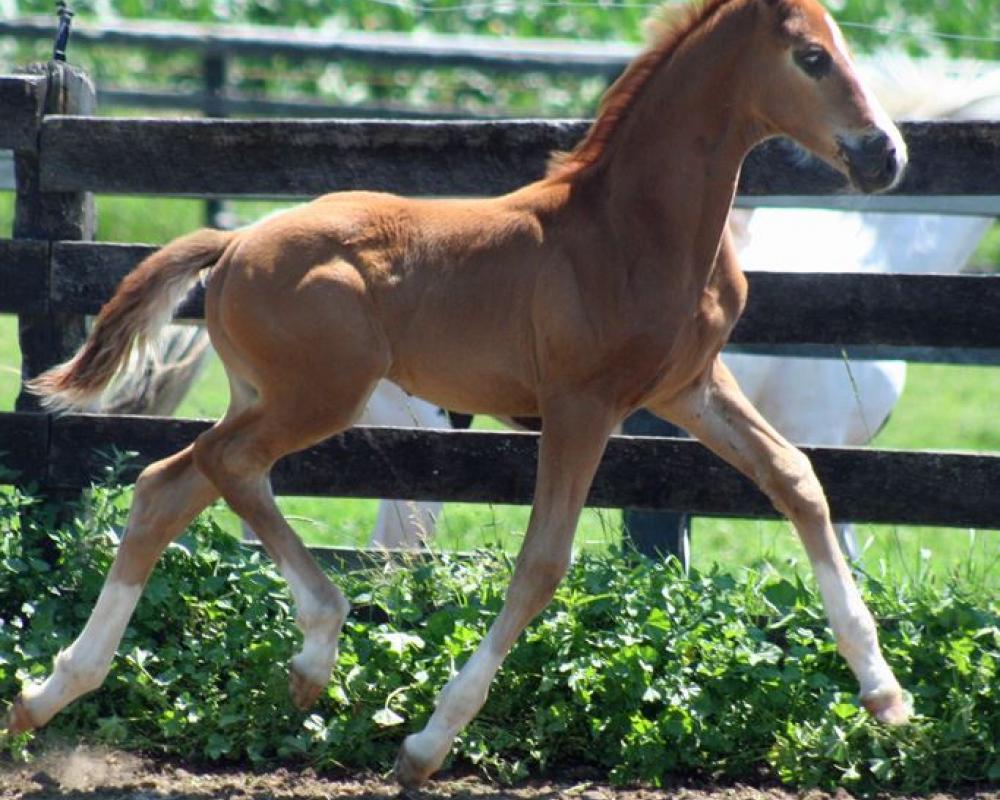 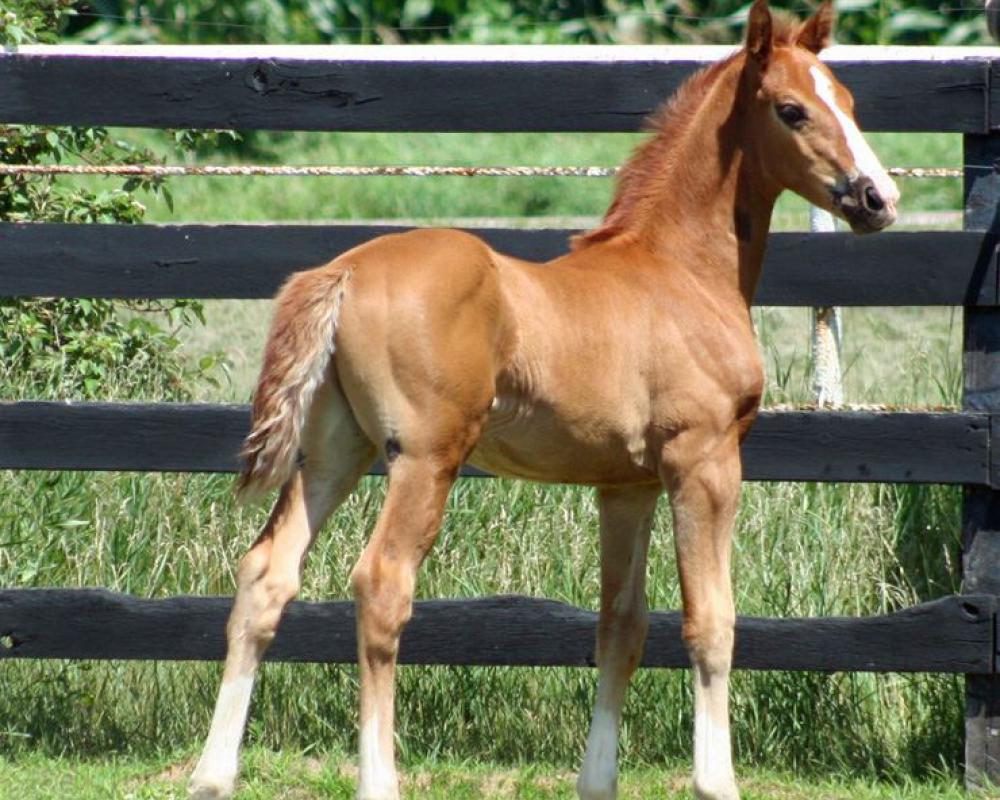 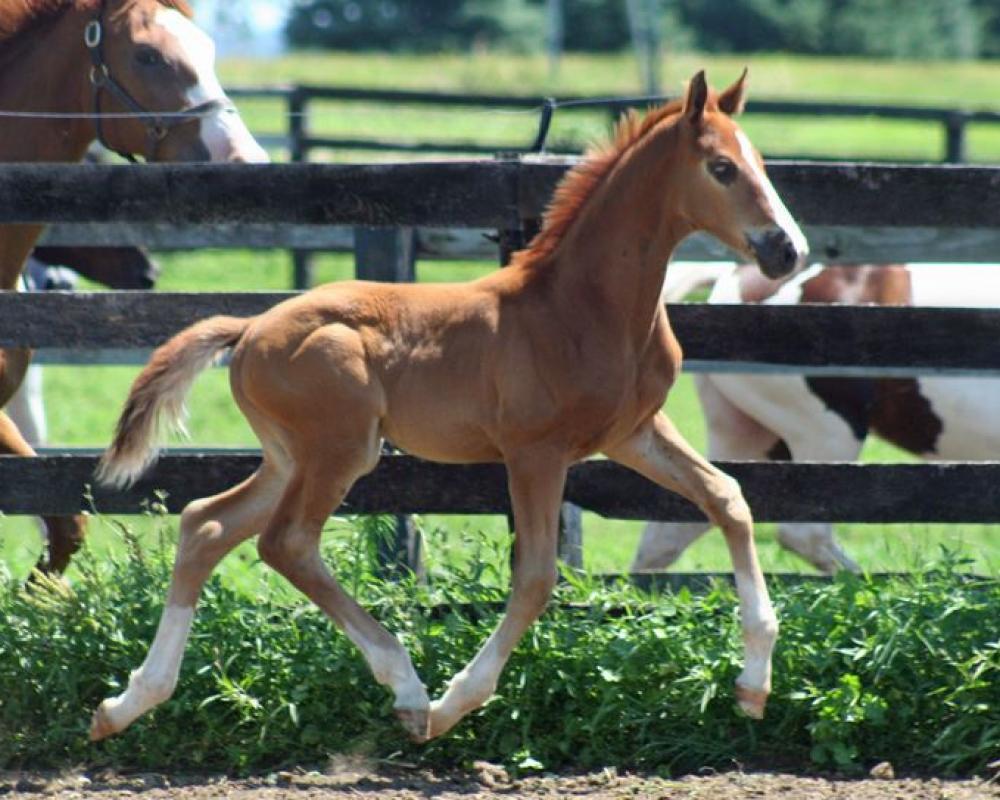 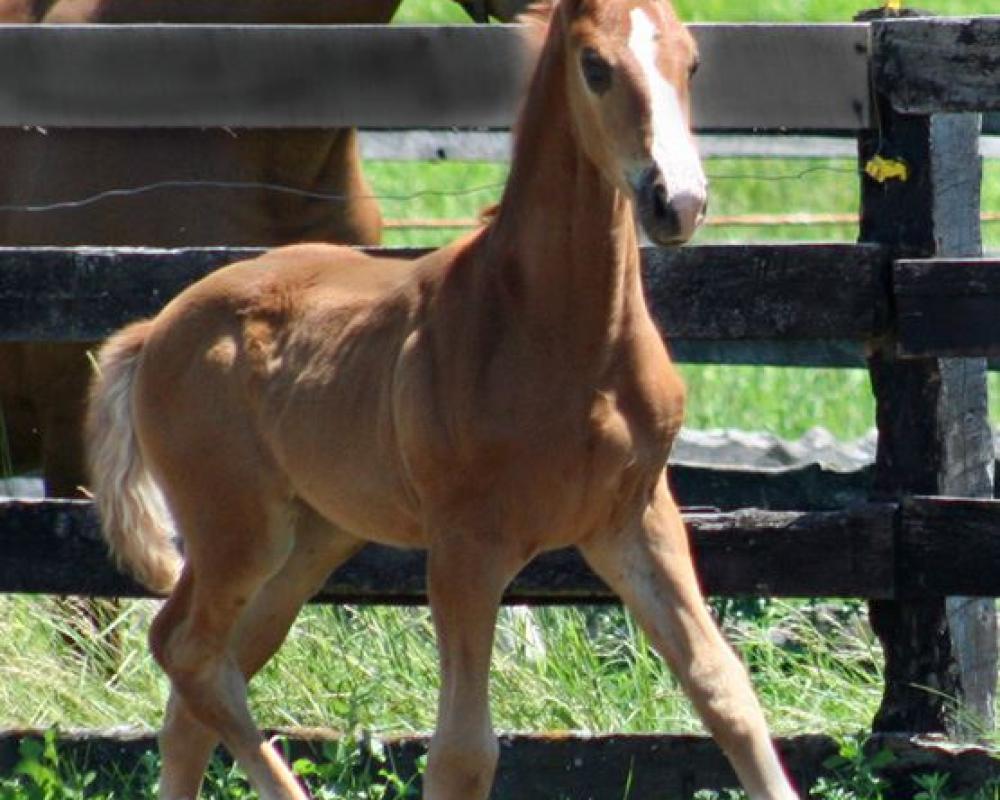 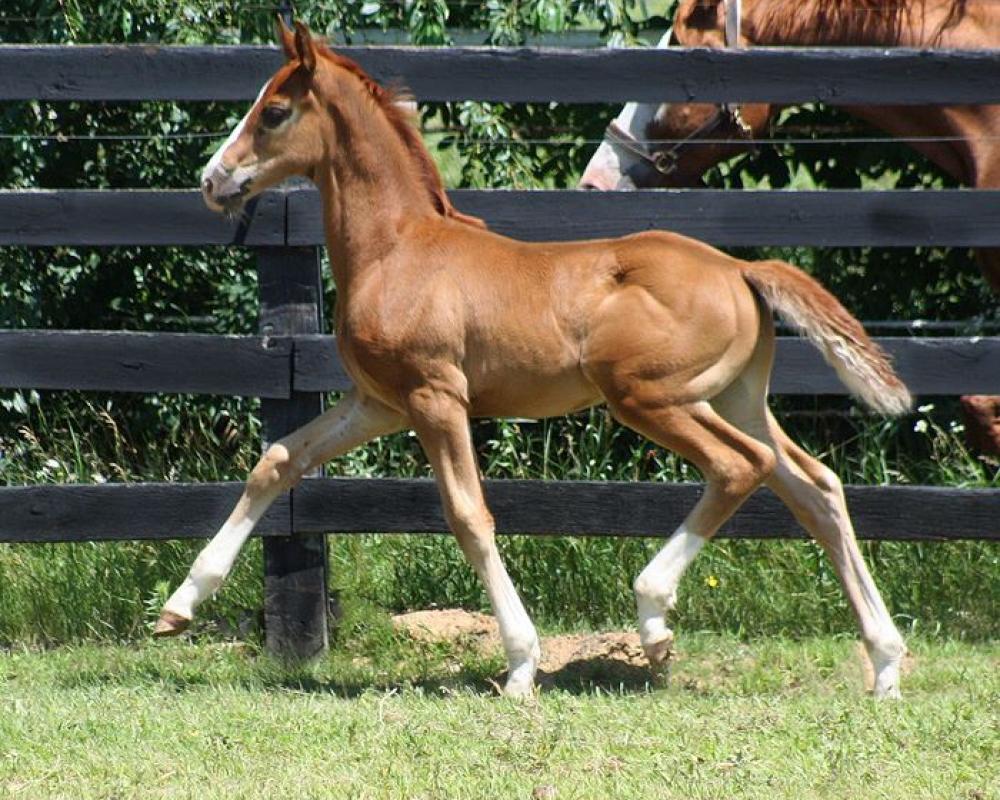 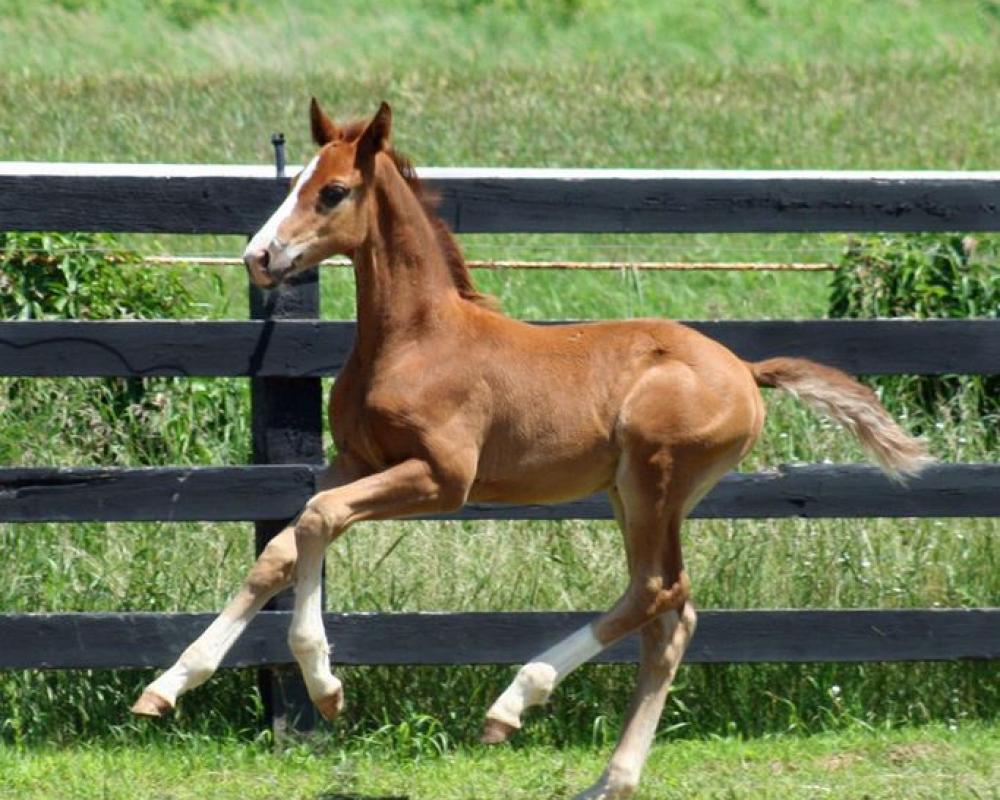 **Recently inspected GOV received Premium status - inspector noted that he had three excellent uphill gaits including a balanced canter and a fantastic walk and trot.
This is a big, fancy and lovely moving colt with a huge stride and three excellent gaits. He is going to be tall, he is well conformed and he has a lot of flash to the way he looks.

Capriole is a 17.1 hand Hanoverian mare. She was the Site Champion at her GOV inspection scoring an overall 7.3 with 8's for her walk and saddle position.Capri has competed up to 3rd level. She comes from a RARE 8 generations of Elite/States Premium Mares damline.

Her dam, Elite/ States Premium Finastra was the highest scoring mare (8.3) in her Mare Performance Tests across Germany for her testing year; she scored 9 for her trot and rideability and 8 for her walk and canter. She won 4 material classes and her 1A prize in Germany. After being imported, she received 2nd place at Dressage at Devon and was a Champion Qualifier for USDF breed finals. She produced a 2005 Oldenburg stallion, Sandro Fidelis(Sandro Hit).

Capriole's maternal half brother, Sandro Fidelis was approved and licensed at the 2011 North American 70 Day Stallion Test. He earned an impressive 10 for character, 9 for temperament, 9's for walk, trot and canter, 9 for willingness to work and 9.5 for constitution. Along with the stunning beauty and expressive gaits of his sire Sandro Hit, he exhibits the active hind leg, incredible power and tremendous elasticity of his dam sire, Feiner Stern.

Capriole's sire, Contucci won the dressage portion of his 100-Day test with an impressive 147.11, earning six 9’s. He successfully showed in Germany, including winning a Bundeschampion qualifier with a 9.2. After his importation Contucci was only lightly shown, but was trained through the FEI levels. Contucci was the 2005 USEF Dressage Breeding Sire of the Year, the 2009 USEF Dressage Sire of the Year, and has sired more USDFBC Grand Champion or Reserve Champions than any other stallion. Winners at the 2006-2009 USEF Young/Developing Horse National Championships were sired by Contucci, and his offspring are successfully competing from training through FEI Levels with amateur, junior, and professional riders.

Capriole's damsire, Feiner Stern. At the stallion performance test Feiner Stern achieved 9.0 4 times for his ability to perform, rideability, trot and gallop in training, and got more than 120 points in the final result. Due to this performance, in combination with a convincing first crop as well as his impressive appearance, he was awarded the title of main premium winning stallion in Oldenburg in 1987. His first batch of foals brought 4 approved sons, among them Feinbrand, the first reserve champion and Fair Play, the 2nd reserve champion of the 1989 stallion approvals in Oldenburg. Feiner Stern now stands in the USA and continues to produce superb all round sport horses.

Sire of Londontime, Londonderry, is a stallion with great ability to pass on his dressage genes. His breeding value is very high and he improves in all aspects. See further information about this popular sire under his section. Walt Disney who also stood at Celle as a dressage sire, improves in all aspects of conformation and type in his progeny. In 1989 he competed in the finals of the Federal Championships in Mannheim and finished 5th and then he won the stallion performance test in Adelheidsdorf with an index far above average for rideability and jumping. He became well known for being one of the world-famous quadrill of chestnuts at the Celle stud. He produced numerous good Grand Prix horses in Hanover before continuing his breeding career in Denmark. Wieneria’s sister Wellness received the candidate status for a State Premium Mare. In the third generation of Londontimes pedigree stands the dark chestnut Trapper who was one of the most influential Hanoverian dressage sires of his generation.

At his performance test Londontime achieved high scores for rideability as was expected. He received: 8 character, 8 temperament, 8 willingness under saddle, 8 conformation, 9 trot, 8.7 canter, 8.8 walk and 8.3 for rideability. Londontime went on to win the riding horse championship in Elmlohe and in Verden during the World Championships for Young Dressage Horses he placed third twice behind Locksley 11 and Dancier. Londontime was the top priced horse at the 115th Elite Auction in Verden and the high-light of an exceptional collection of horses. He sold for Euro 510,000.00. He has 9 licensed sons, 52 state premium mares, 104 auction horses.

Terms
Price includes board, routine deworming and farrier care through weaning and board until two months post weaning. We take PayPal and all of the other major credit cards. This colt has been reviewed by an equine vet and has two palpable testicles and is he