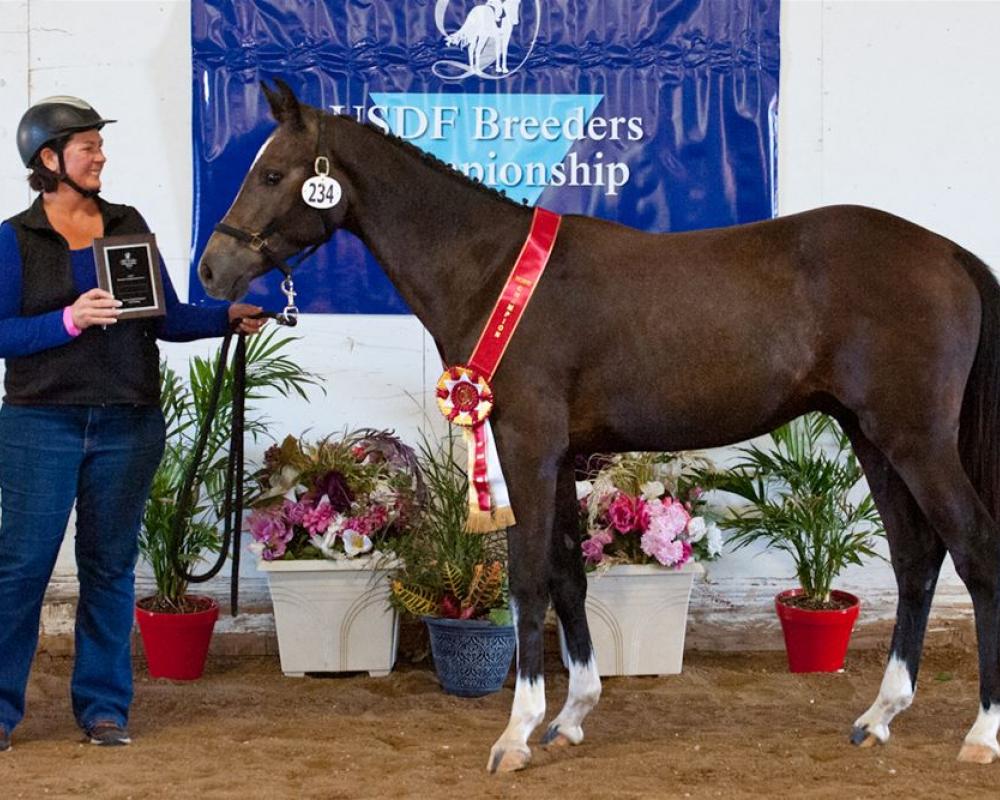 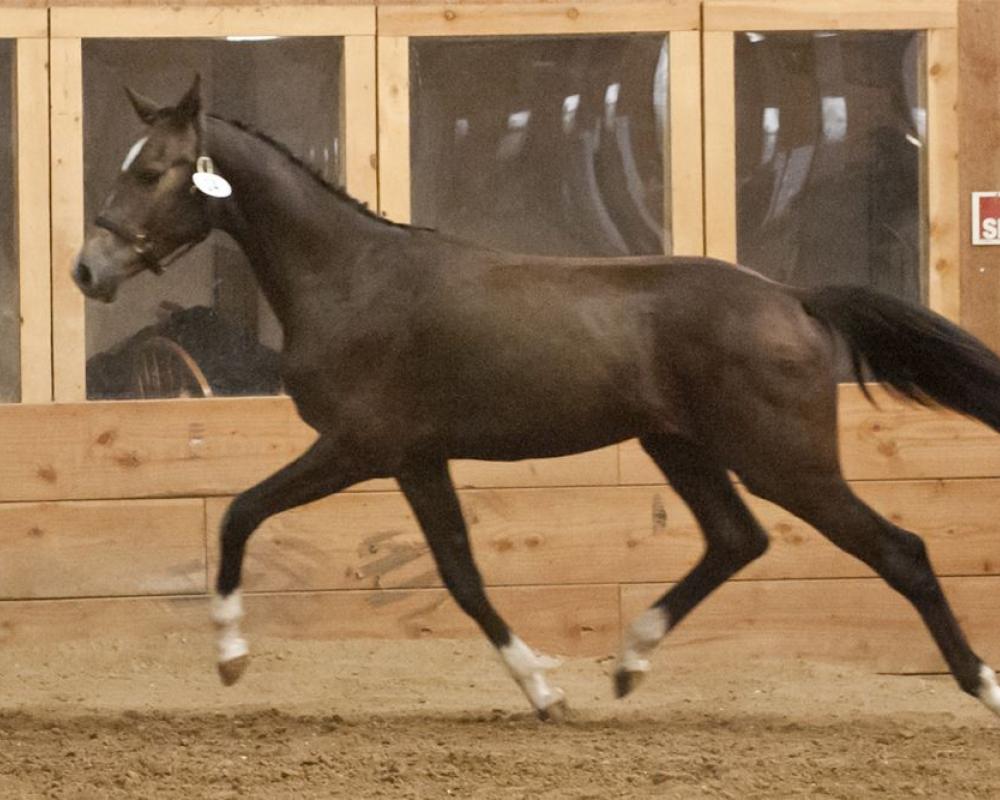 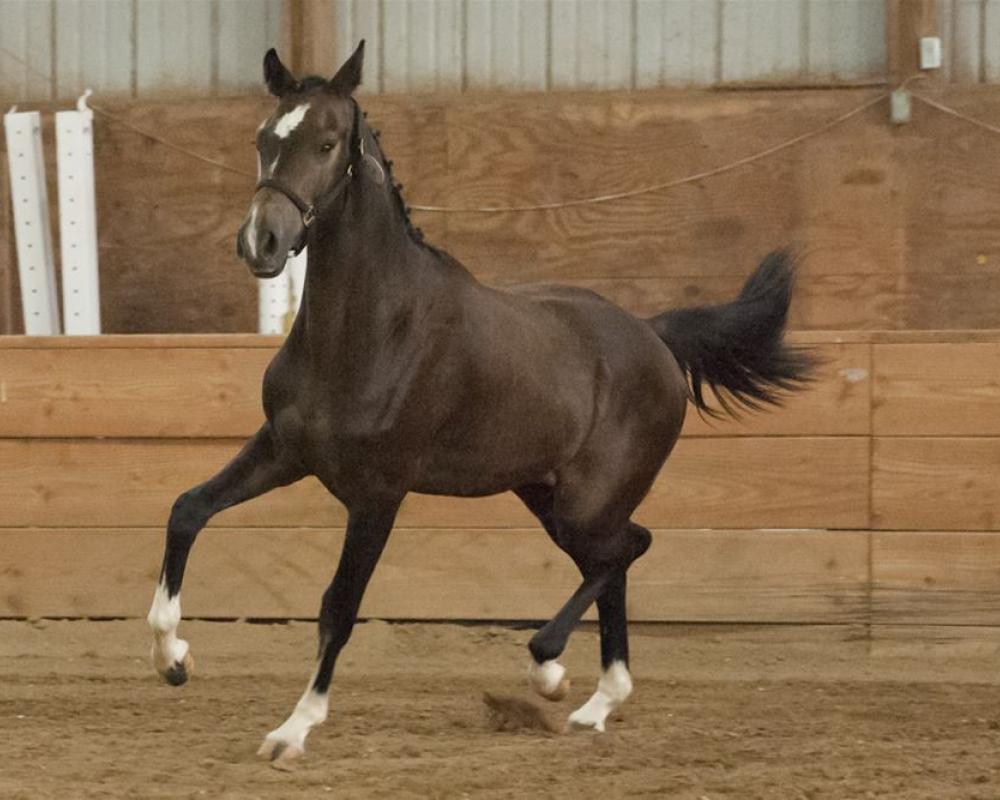 2019 was a a great year for Lazlo. He was the 2019 USHJA region 6 Horse of the Year in the 2yr old hunter breeding class. He was also the Reserve Champion for USDF Region 4 colts and geldings. He received an 8 for his trot and a 7.8 for his walk. Both judges commented on his elegant modern type. He handled his first show with a calm attentive attitude. The handler said he was a pleasure to work with! He will mature to around 16.0 hands and his temperament makes him suitable for an amateur but with the conformation and gaits suited to a professional. Even though perfectly calm he exhibited consistent elastic powerful movement. He has excellent freedom of the shoulder, extremely active hind leg with a very good connection from back to front. Lazlo presents a very refined modern expression with a good foundation. He has excellent ground manners and is easy to handle. Screening radiographs of his stifles and front feet show no abnormalities.

At the Young Horse Show in August 2019 Lazlo showed he can also jump. Very willing and Judges comments "not even working hard, huge canter stride". He scored 8s for both his willingness and his scope. Lazlo was so brave through the shoot the judge thought he had much more experience. This was his 2nd time through the FJ shoot. Her comment: "He'll jump whatever you put in front of him."

With these qualities,he would make a great 3 day eventer!!

Lazlo's sire Lorentin I was successful in dressage at Grand Prix before a career ending injury at 14. Lorentin I produced numerous offspring successful at the highest levels of competition. His son Liebling was Carl Hesters Silver medal partner at the World Equestrian Games in 2010. His son Lusello was the champion stallion at his approvals in 1999. As with all Holsteiner stallions, despite being a dressage horse Lorentin also produced horses with an outstanding jump.

Lazlo's dam Adele is an elegant mare with powerful movement. elastic gaits and an outstanding jump. A 48 point premium mare, her free jumping score was 8 for willingness, 8 for scope and 9 for technique. Adele comes from the very successful breeding farm of Soenke Thamling. She was imported as a foal from their farm in Holstein in 2008. The Thamling family has been breeding stamm 456 for generations and has produced numerous successful horses including Eurocommerce Montreal who placed 4th in the Athens Olympics. Adele's dam Gladiole is one of their favorite mares. Her son Quite Calypso competed in the Bundeschampionat as a four, five and six year old, placing as high as third. Gladiole's older full sister Tropika produced internationally ranked jumpers Lambado 4, Quentin 13, and Dahlia Z.
​
Adele's sire is the extremely popular, Holsteiner stallion Clarimo. He is currently Roelf Goeran Bengstson's top horse with numerous wins on the big tour. Clarimo has also produced two approved sons, Crunch and Chupalino and is one of the highest ranking stallions of approved mares who as a group rank 1st in free jumping and 3rd in rideability. In 2016 his son Classic Motion sold for $160,000 at auction in Germany.

Clarimo's sire Clearway competed successfully on the international scene with Lars Bak Andersen placing in the prestigious shows of Neumuenster and Braunschweig. Clearways dam Wodka II also produced Conway I and II as well as Arturo. Conway I by Caretino racked up over 40 wins at the Grand Prix level here in the US. His younger brother Conway II qualified for the German Young Horse Championship two times, placing second in his qualifiers. The prolific Wodka II also produced Chika's Way by Caretino who had multiple succeses in the international arena under Olympian Janne Fredericke Meyer.
​
Clarimo’s dam Wisma has written her own history in Holsteiner breeding through her other two sons Cassini I and II who have produced numerous internationally successful sporthorses and approved stallions. Her daughters have also proven themselves, particularly Donata who is the dam of approved stallion Lovari.

Located on 70 acres of rolling Iowa farmland, Walnut Hill Holsteiners has the optimum environment for raising horses. Our imported foundation mares have been carefully selected from the most successful breeders in Germany. Each mare's dam line has a history of producing champion jumper and dressage horses. We pair them with the top approved Verband Holsteiner stallions to produce outstanding athletes. ﻿ Our foals are imprinted and socialized. They enjoy turnout in large pastures and receive regular veterinary and farrier care to include chiropractic and acupuncture. All our foals are inspected, branded and registered by the American Holsteiner Horse Association. We carefully start our youngsters at three and provide them with a solid foundation in dressage and jumping. They enjoy regular hacks through the Iowa countryside providing them with a variety of new experiences.  As a result they are relaxed, confident mounts suitable for any discipline.
Email Seller Now
Visit Seller Website
More Horses From Seller