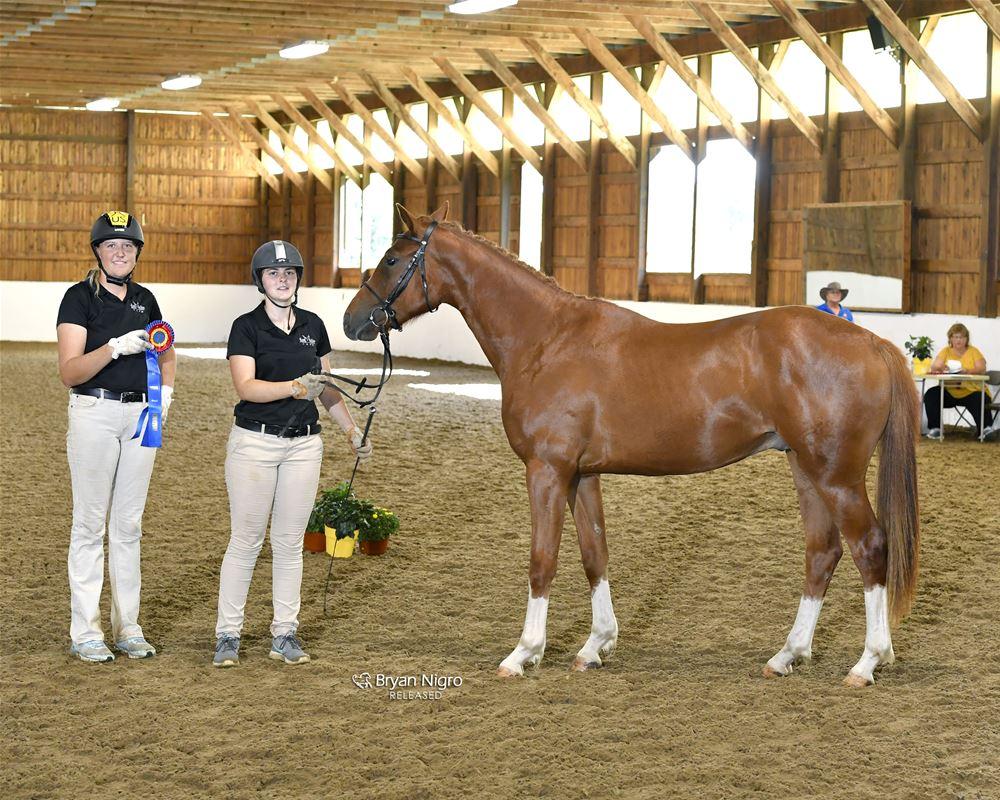 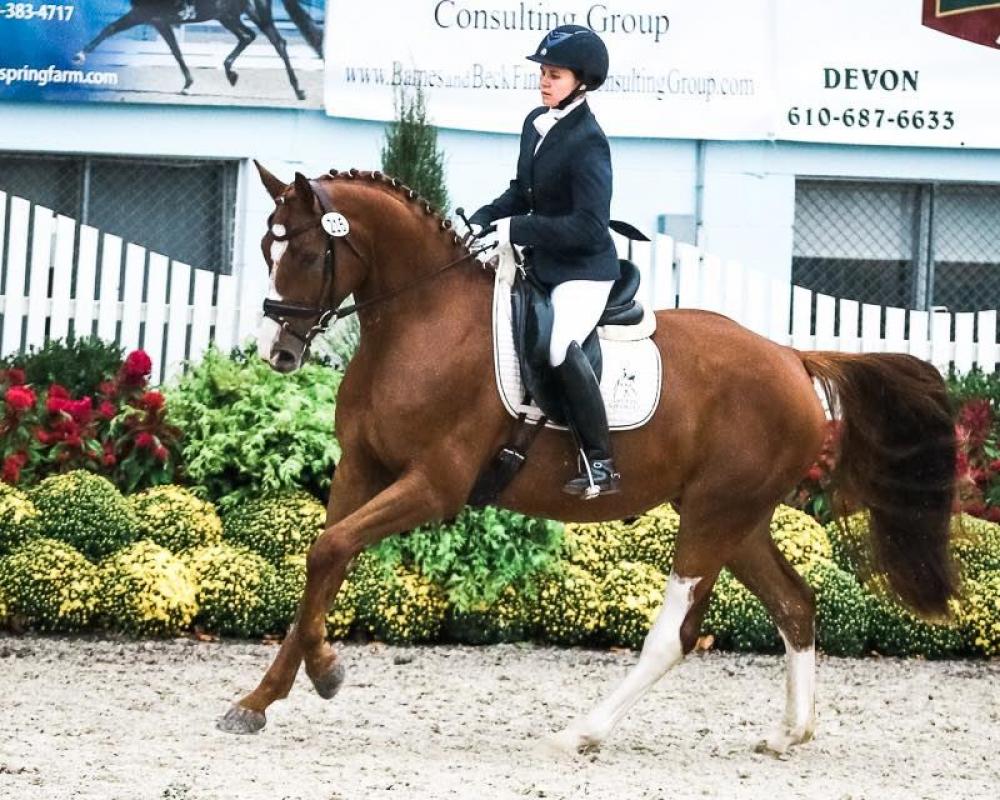 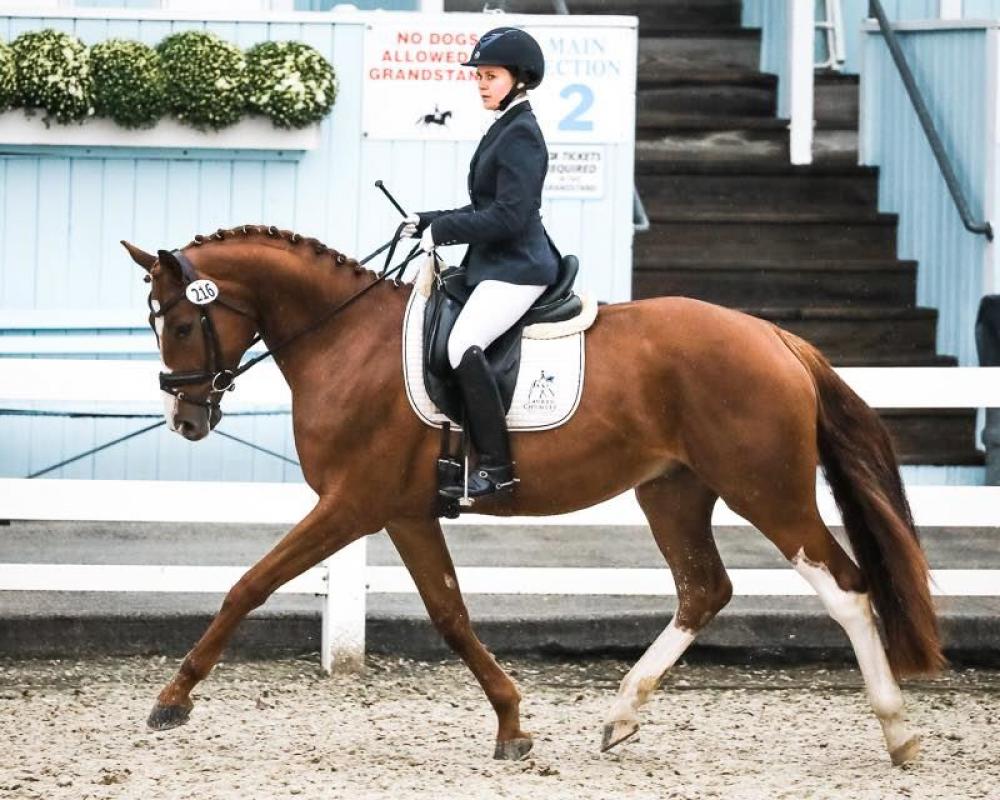 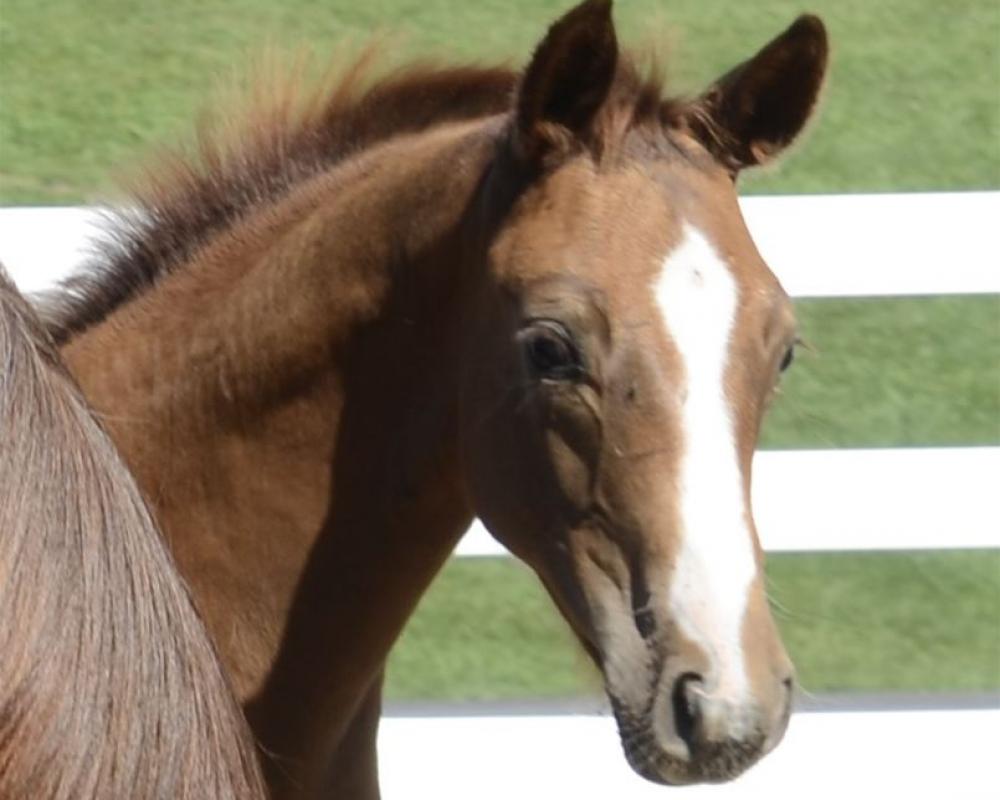 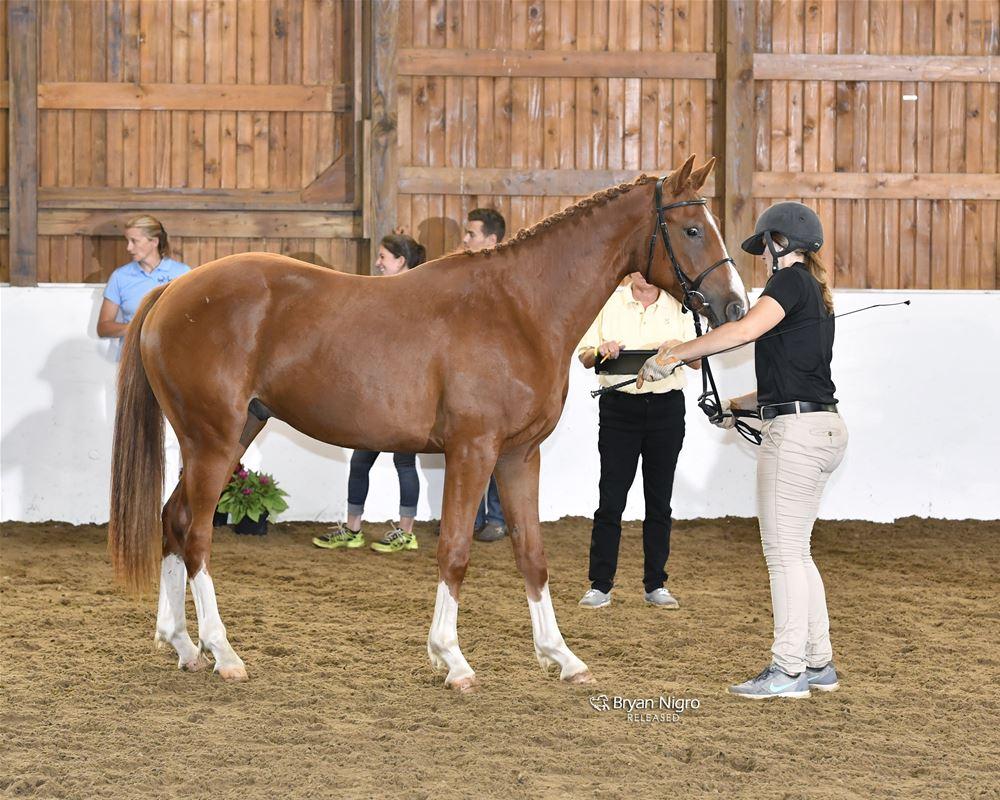 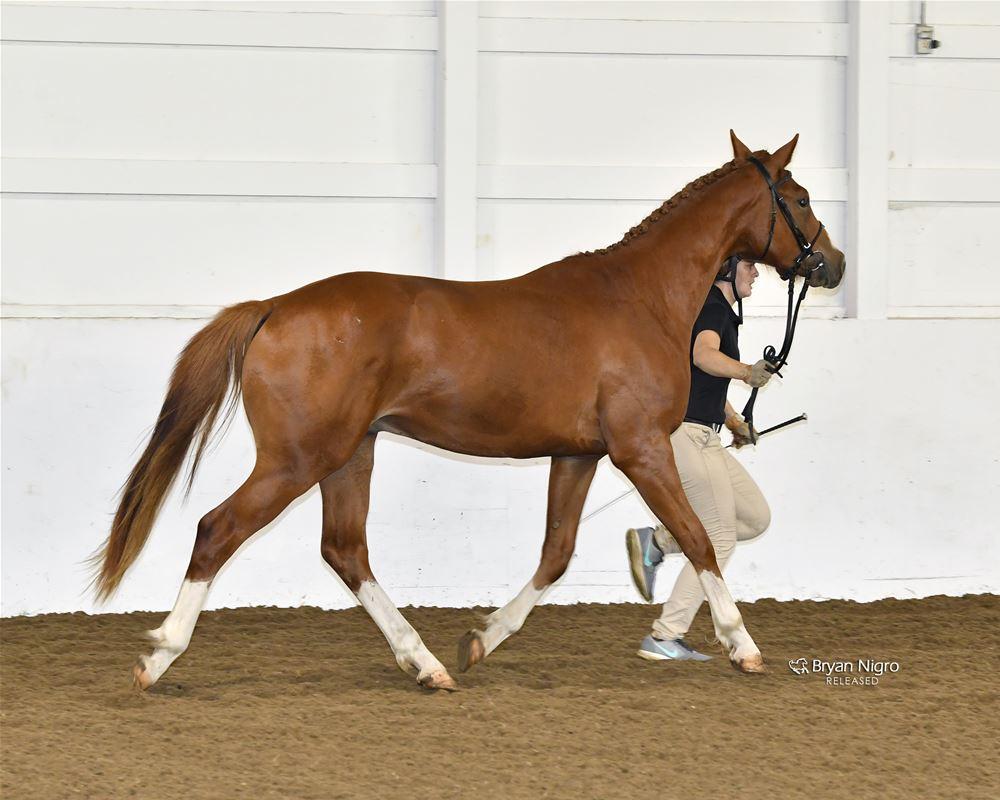 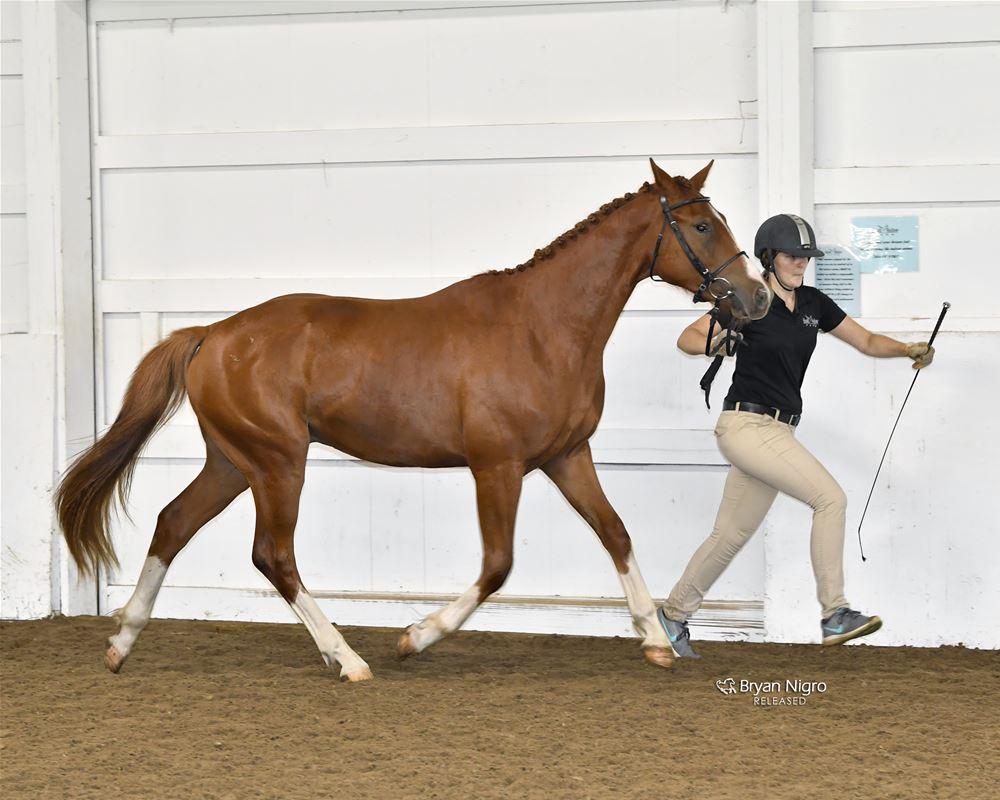 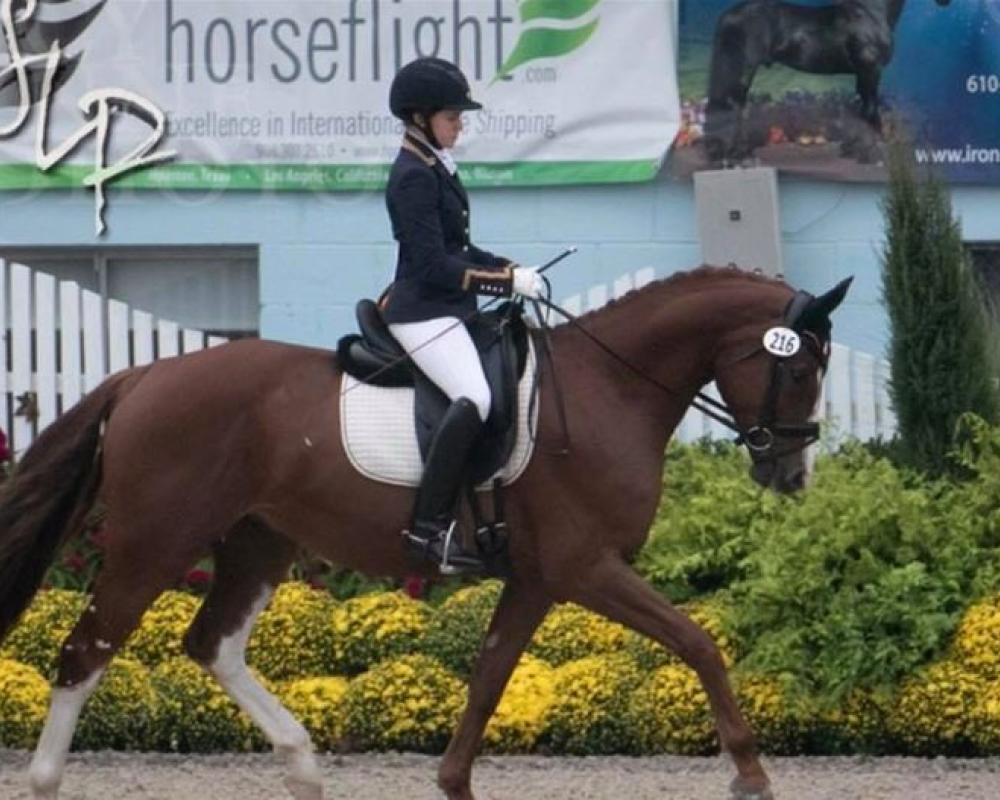 Remarkable HHF aka "Markie" is an elastic, uphill moving colt with a great laid back personality. If you are looking for one with chrome to get you noticed in the ring...this is the one!! And boy can this colt move!! Last year’s full brother sold at a couple of weeks old to an FEI dressage rider. He has a full sibling born in 2015. His brother Wreck It Ralph HHF (Ralphie), a three year old at the time, won his under saddle class at Devon this fall. The under saddle pictures in this ad are Markie’s older brother Ralphie at Devon. Markie got four whites and Ralphie got two but they are so much a like otherwise. The trainer that broke and prepped Ralphie for Devon had nothing but good things to say about him.

Markie has been under saddle for a few months. He was easy to break and is super reasonable under saddle. He is content working indoor or out. He is is happy and relaxed out on the trails. He already has clean changes in each direction.

We think that Markie would make a wonderful dressage prospect for an adult amateur that doesn't want a ginormus horse. He should mature 16 hh plus or minus a bit.

Markie is priced at $35k but will entertain reasonable offers.

BLOODLINES: This Rotspon/His Highness cross is such a wonderful niche! More on Markie’s bloodlines are below:
His Sire Rotspon was the 2018 Hanoverian Stallion of the Year!!
From Superior Equine Sires: “Rotspon is another top quality son of the dressage stallion Rubinstein I. He was the sovereign winner of the stallion performance test in 1998, scoring an excellent 148.82 points in the dressage category. Like his father, Rotspon is a very impressive horse with a great rideability, outstanding movements and a high ability for dressage. He also has a good jumping technique which is highly above average. He is an elegantly made sire in a noble black coat with a lot of expression and appearance. The first offspring of Rotspon were born in the year 2000. The foals have beautiful heads and a good conformation (long sloping shoulder, long well set up neck). They are equipped with a very elastic trot and a ground covering walk, and have been very much in demand. At the prestigious Ratje Niebuhr-Show of 2002, Rotspon was the second most successful sire represented, with only his first crop. Both the two and three year old classes were won by his daughters, with the two year old becoming the youngest champion in the show's history. Rotspon has begun creating his own branch of the Rubinstein I dynasty with many approved sons and daughters, as well as high-priced auction horses and stellar performance horses. In 2005, Rotspon received a Breeding Value Index of 155 points, with an assurance of 97% heritability, from the German Equestrian Federation.”
More Information on Rotspon https://www.horsemagazine.com/thm/2018/01/rotspon/
From Leatherdale Farms who owned HH: His Highness was the Hanoverian undisputed licensing champion of 2002. “We see in HH's foals his wonderful sweet temperament, beautiful topline and unbelievable movement. With the new turning 3 year olds we are seeing his tremendous rideability.
At the Danish licensing in 2005, he was proclaimed champion of the four-year-old dressage stallions. He was champion at his stallion performance test in Prussendorf in 2003, receiving a total score of 149.24. His outstanding quality was rewarded with the dressage index of 155.04, the highest score in this class. His Highness also knows how to please with his progeny: many offspring from his first two foal crops were chosen for the Verden auction program and were awarded champions at many breeding shows. He now has 9 licensed sons. We are anxious to see his daughters as they start to come into the dressage rings around the world in this next year!
He has been under the watchful eye of Klaus Balkenhol in his training and we are indeed grateful for the correct and slow training he has done with him. Klaus has called His Highness the perfect horse...conformation, movement and mind!!!
Susanne Meyer started this magnificant horse at the stallion station at age 2 1/2 and she basically found she could just get on him and ride! Talk about rideability! Stefan Wolff next did a remarkable job in riding him to his first Bundeschampionate at age five.
At this time we are fortunate to have Inga Von Helldorff riding His Highness and they competed in the 6 year old finals at the Bundeschampionate in 2006. Highness is now doing PSG.
His Highness' sire Hohenstein I belonged to the premium stallions at his licensing in 1993 in Neumünster and was reserve champion at his stallions performance test in 1994 at Adelheisdorf, where he received the highest dressage index of 148.29 from all 53 stallions in this class. He continued his career as champion of the Trakehner Riding Horse Championships in 1995 and won the Bronze Medal at the Federal Championships in Warendorf. At the age of seven, he has already competed successfully in dressage shows up to advanced level. In the meantime, he has become successful up to Intermediare II level. Hohenstein I is sire of more than 20 licensed stallions, one of them is the Grand Prix dressage horse Münchhausen TSF. Hohenstein I is Elite stallion and was proclaimed Trakehner Sire of the Year 2002.
His Highness' dam, States Premium mare Daireen, was several times champion of her class at breeding shows. Daireen's sire Donnerhall deserves the title "Sire of the Century" because of his incredible success as both breeding and sport stallion: two Gold Medals at World Championships with his rider Karin Rehbein, more than 110 licensed sons, 160 States Premium mares and 1.3 million Euros total prize money of his offspring in competition. His Highness' grandmother, States Premium mare Flic Flac, produced the show dressage horse Corigo (Contucci), competing successfully up to medium level. Her half brother Donnerprinz (Donnerhall) was licensed and was successful up to Intermediare I. Her half sister, States Premium mare Dixie (Donnerhall), produced the licensed Don Jovi (De Nior). From the dam line of Wolgarune descend more than 25 licensed stallions, among them Adios I,II and II, Allround, Thronfolger and Walzerkönig as well as the Olympic horse Crisp, ridden by Ricky McMillan/AUS.
His Highness is truly a horse of a lifetime. We never envisioned we would find such a horse!”

We offer a selection of Hanoverian horses for sale, weaning thru FEI level horses available at most times. We also specialize in young horse raising..allowing the foal or young horse that you purchase to grow up in a herd situation with maximum turnout and handling. We have a number of foals and young horses as well as riding horses under saddle. If you don't see what you are looking for advertised, please contact us. We may have what you are looking for.
Email Seller Now
Visit Seller Website
More Horses From Seller