Rock my Soul WF
For Breeding 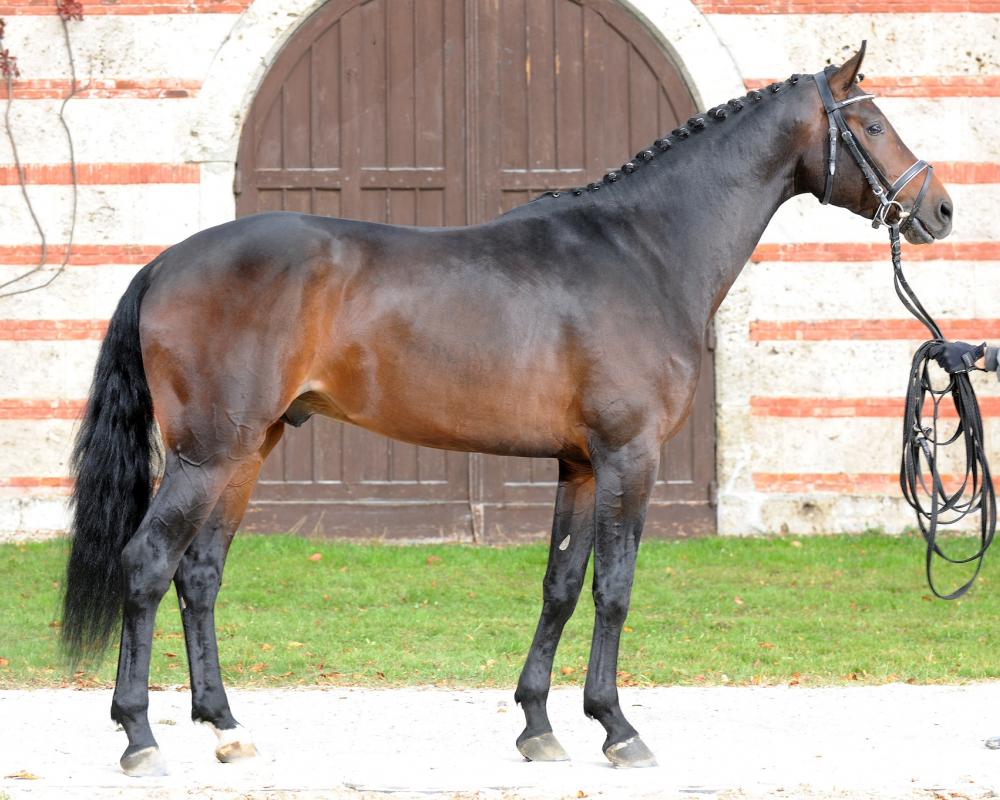 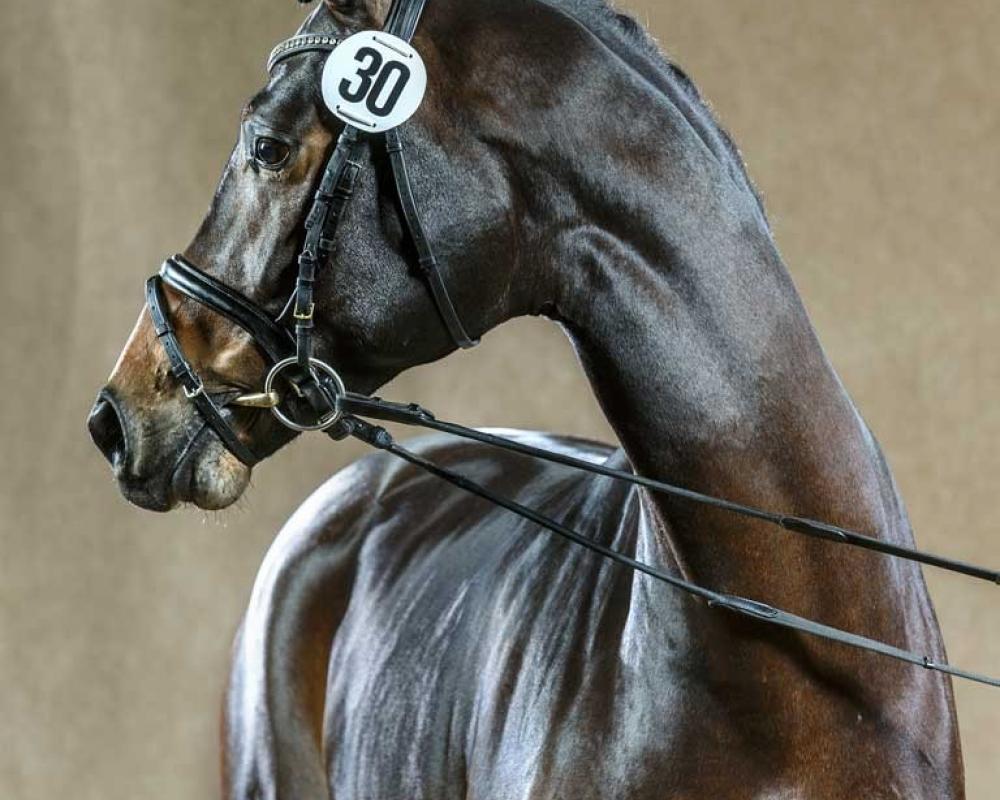 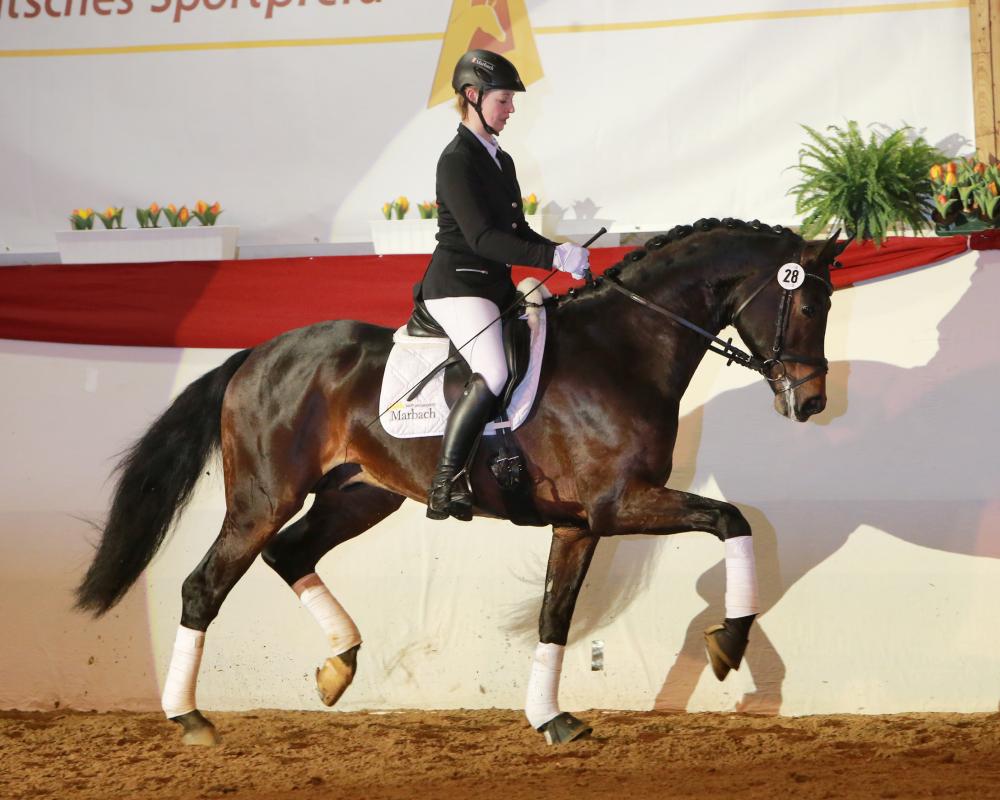 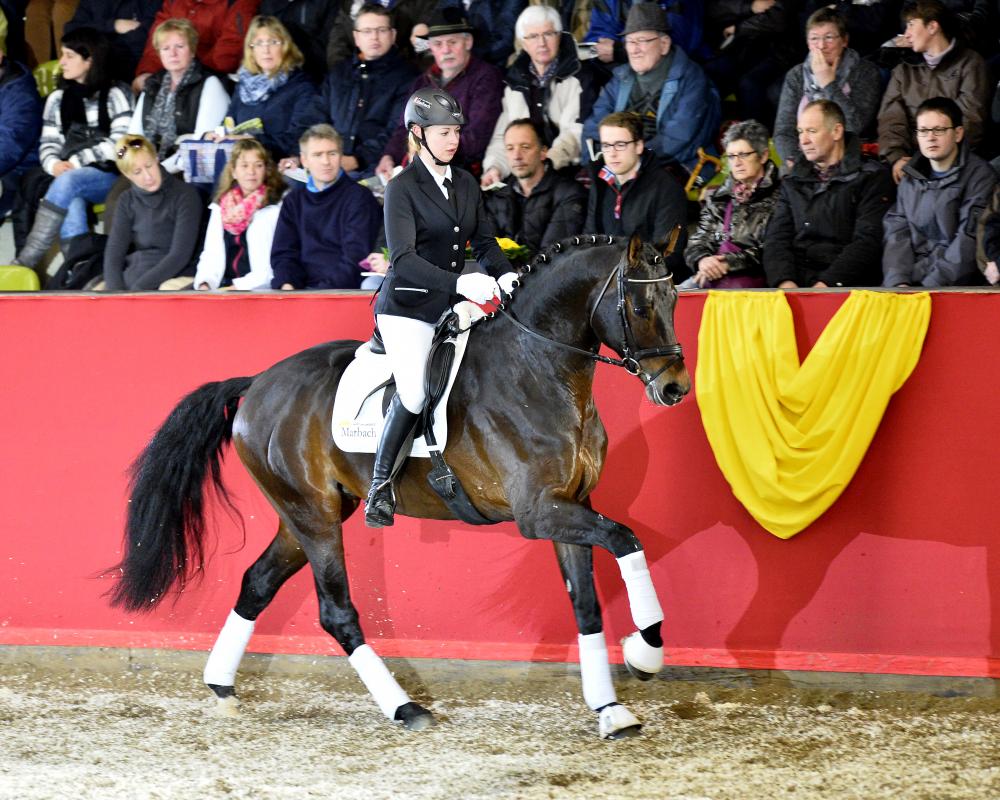 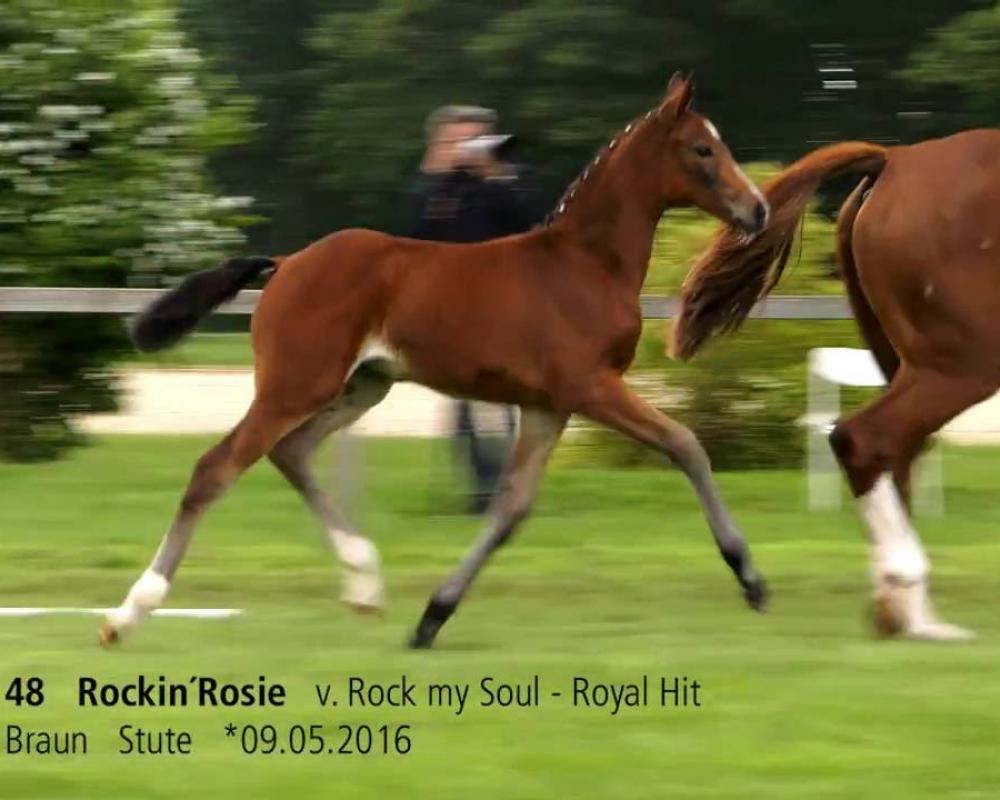 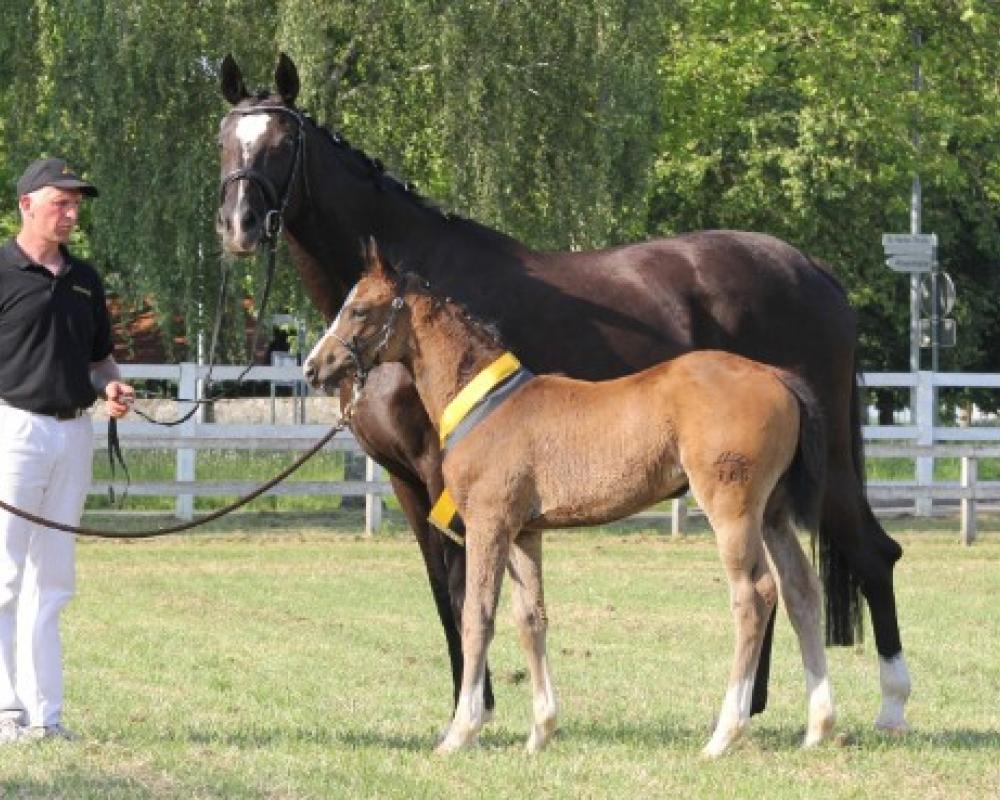 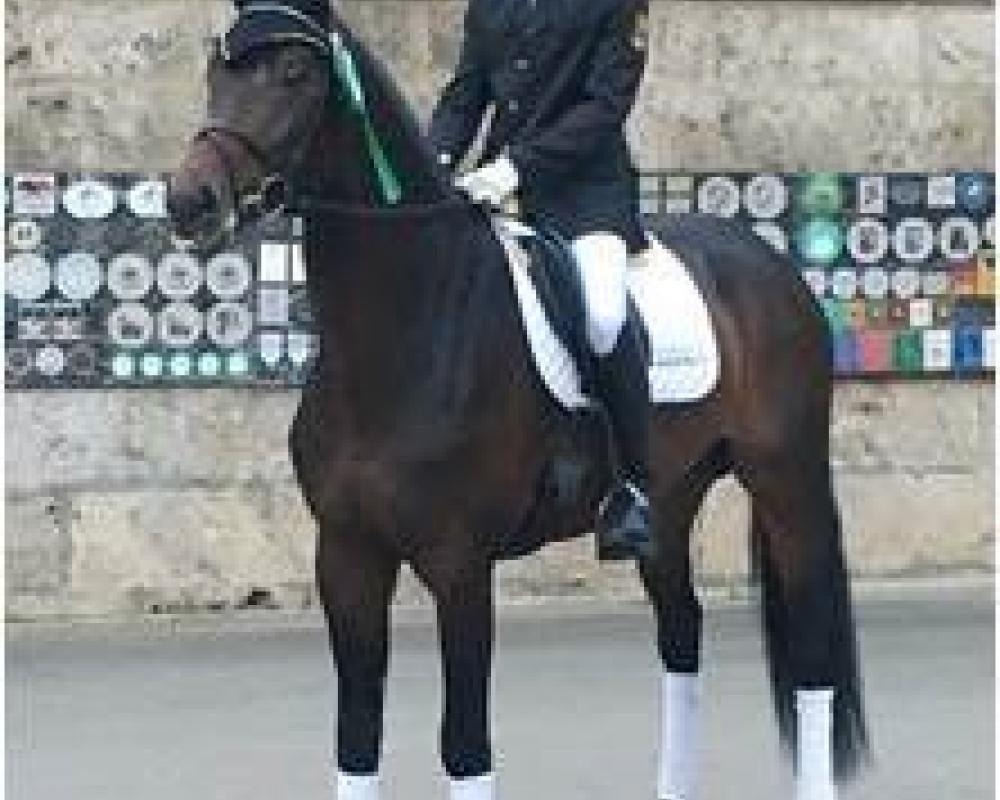 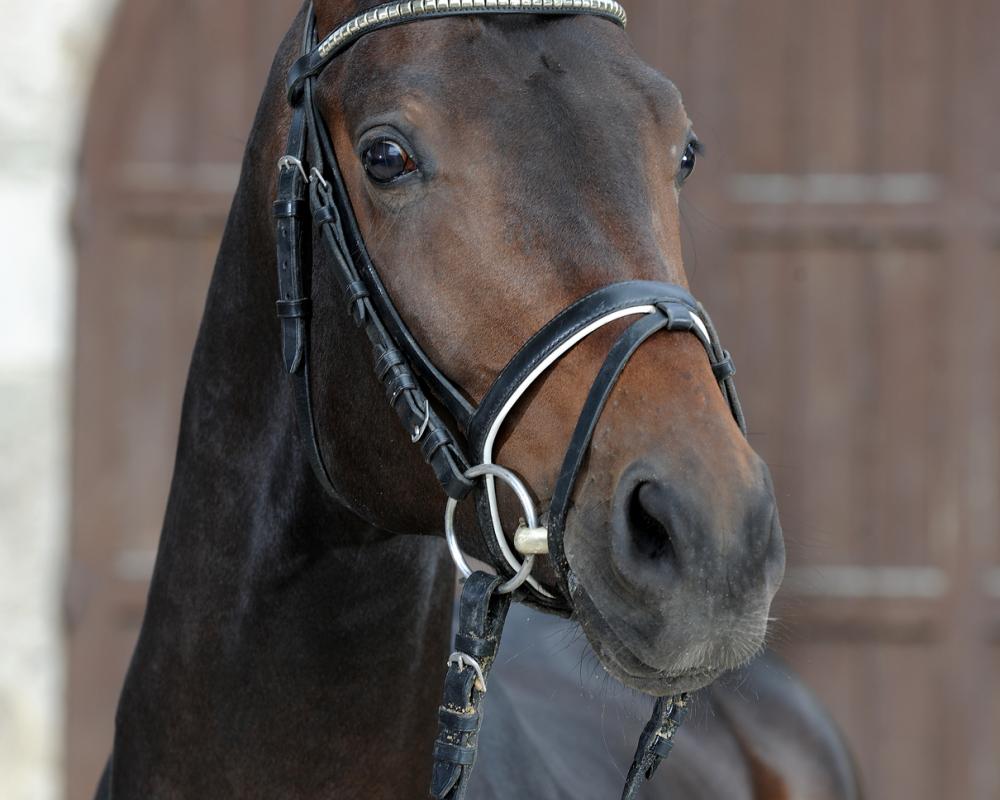 Rock My Soul WF achieved the dressage breeding value of 130 at the 30 day stallion inspection in Adelheidsdorf, Germany in 2015.

His type, elegance and hind action are impressive. He shows lightness and extension, especially in the walk.

Due to a fetlock ligament injury he had over a year off and is now just coming back into training.

Over 50% of his first two foal crops achieved Premium status in Germany, proven to be very strong in type and movement.

His sire Rock Forever NRW has proven his versatility by victories in the highest level of dressage. According to the FN breeding value estimation, he is one of the most versatile sires ever.

Top performance blood circulates in his dam line, proven by several premium mares and state premium mares in every generation. Bred over Landstreicher-Damokles-Pilot you will find the famous stallions, Landgraf I, Ladykiller xx and Capitol in his pedigree. The direct grand dam and great grand dam of Rock Forever successfully competed in international competitions (e.g. Prinzess of Pilot under M. Beerbaum), but a long list of brilliant international successful sport-horses, produced by the direct dam-line, has to be mentioned as well.

As a phenomenal Reserve Champion at the 15th NRW-licensing in 2005, this charming youngster presents himself in a dark bay jacket – he convinced the public not only with his three excellent paces, but also with his phenomenal jumping talent. The licensing committee as well as the public praised his extraordinary exterior. His gifted double talent he inherited repeatedly to his offspring.

2014 he brought more licensed sons, including the westfälsichen premium stallion Rock My Soul, so that it can currently proudly look back on 48 licensed sons. With his son Rocky Lee, he is the grandsire of the 1.2 million Euro horse Revolution.

Fiona’s sire Fürst Heinrich who was retired early, was the champion stallion at the 30 day trial tests in 2001, the Oldenburg Stallion Champion in 2002, and was celebrated as the world champion of five-year-old dressage horses in 2003. With Van the Man and Fürstenball he has twice sired the Oldenburg champion stallion. He is also known as the dam sire of licensed Sir Heinrich and his sisters Candy (Oldenburg Mare Champion, mare performance test winner, County Champion and Bundeschampion) and Cindy (Oldenburg Vice Mare Champion, County Champion and Bundeschampion).

The dam line is based on the Irish thoroughbred-mare Daffy Toban xx (TB-family 2) who produced the stallions Count on Me, Grafenstein, Winston and of course International sport horses Grand Girand (Grand Prix Dressage) and Calman (International Grand Prix Jumper).

Terms
Stud fee includes either the first collection of Semen and disposable shipping container (all shipping fees are the responsibility of mare owner) or 30 days of on farm Mare care. (Breeding and handling fees are included in the “On Farm Stallion Service Fe 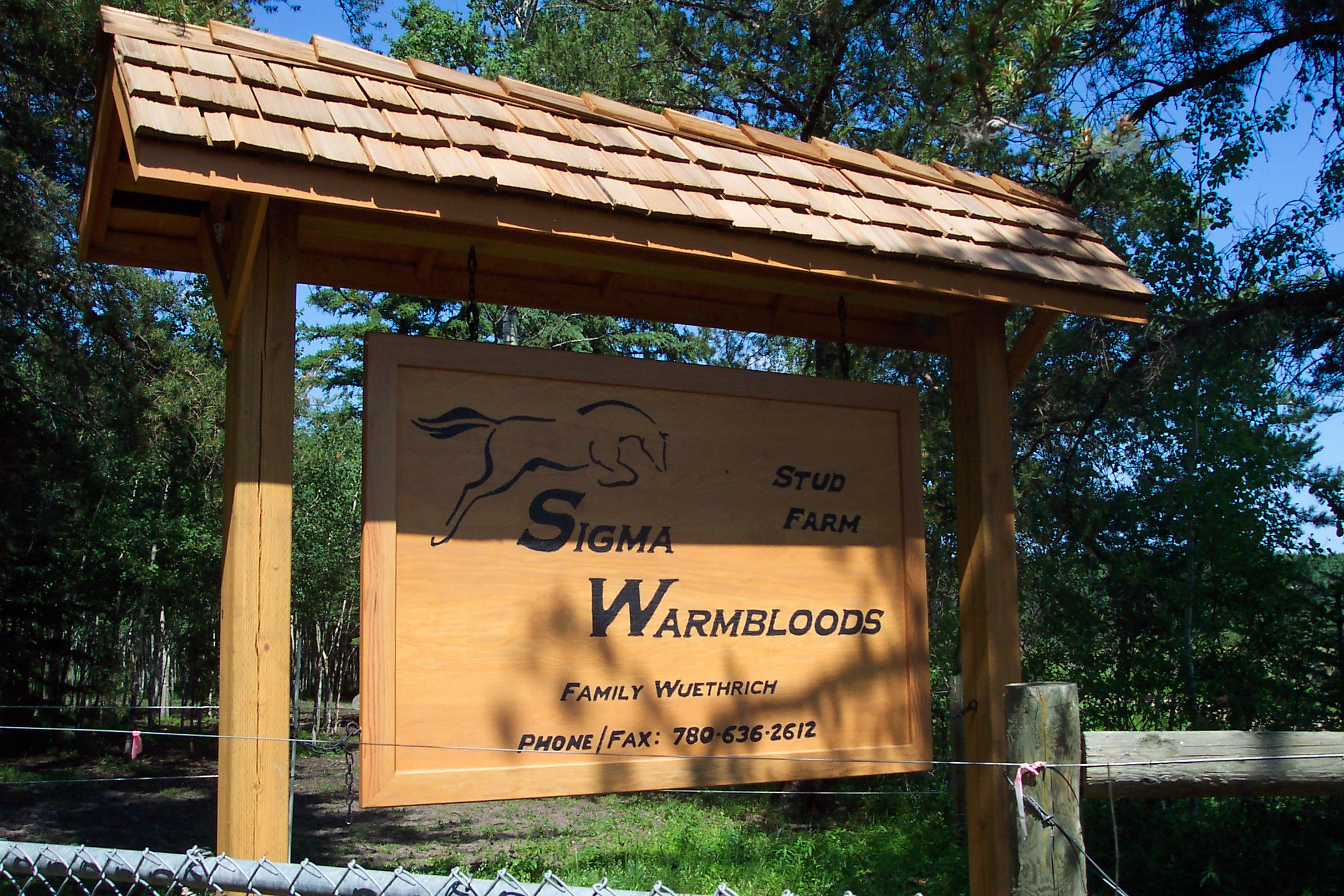 Sigma Warmbloods have been breeding warmblood horses for over 40 years. In 1993, the Wuethrichs imported their first mares from their native Switzerland into Canada. Using these predominantly Swiss bloodlines together with other strong European lines and the Thoroughbred, necessary for today's more modern sport horse, they are breeding an athletic warmblood horse suitable for sport. Their original stallion, the Approved Swiss Warmblood Goya de Lully, by the Internationally famous Gauguin de Lully, has made a mark in the dressage ring with his beautiful paces and work ethic. His first foal crops made their way successfully into the sport. Over the years, their breeding program has incorporated new bloodlines through outside stallions, always with performance in mind. Several daughters of the Approved CWHBA, imported Dutch Warmblood Open Jumper - Wodan, by the Holsteiner Lorenz, joined the broodmare band. In 2002, the Approved Canadian Warmblood stallion Kingston, by Martin's Worry xx, stood at Sigma Warmbloods and in 2003 & 2004 the Approved CWHBA stallion Oberon, by Idocus, also stood at Sigma Warmbloods. The importation of the Approved Oldenburg stallion Gervantus II, added a new dimension to the Sigma breeding program with the powerful jumping blood of the Hanoverian stallion, Grannus. The homebred Garfield W, competing as BMO Garfield under Canadian International rider John Anderson, is an outstanding example of what this proven stallion can contribute to North American breeding and is himself the sire of several outstanding individuals. In late 2004, the warmblood stallions Apanarde & Coka joined their program and contributed greatly to the genetics of the Sigma Warmbloods breeding program. Sadly, they lost Apanarde in 2010, though they do continue to offer frozen semen. At the end of 2016, Sigma Warmbloods were excited to announce that the premium Hanoverian stallion, Royal Blend, was purchased from the State Stud at Celle in Germany and stood in Canada in 2017-2018. In the summer of 2018, they welcomed the Hanoverian stallion, Don Rico, on lease from Prairie Creek Stables. This year, Sigma Warmbloods are proud to announce the purchase of Rock My Soul WF, who will be available for breeding June 2019.
Email Seller Now
Visit Seller Website
More Horses From Seller