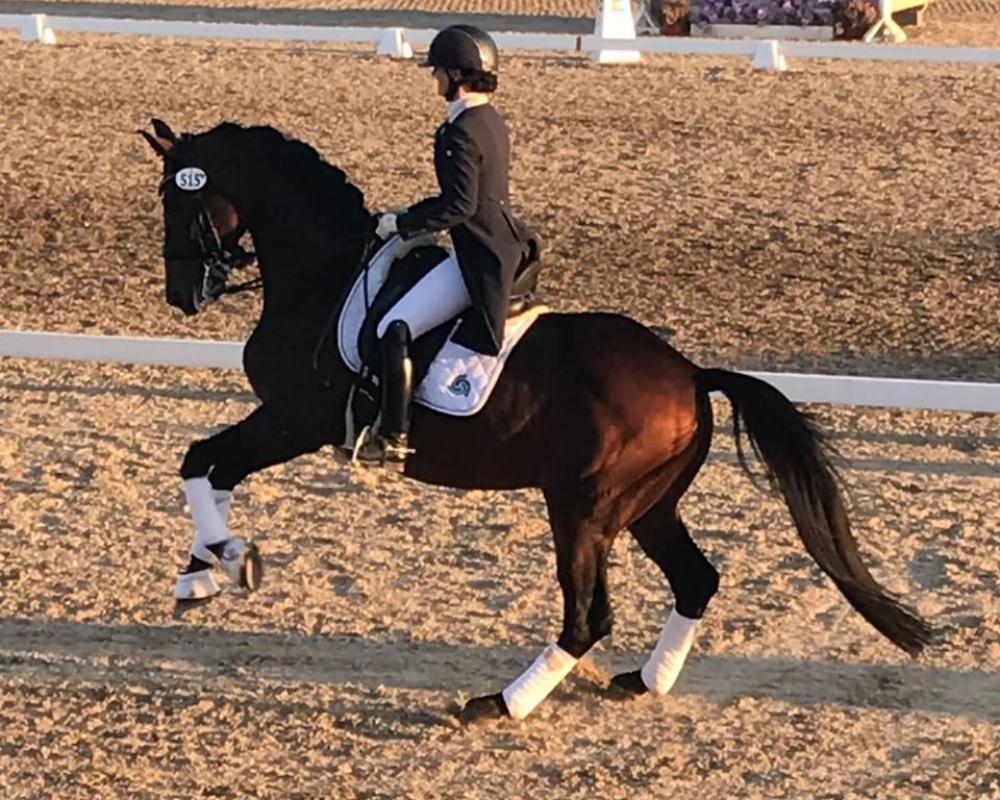 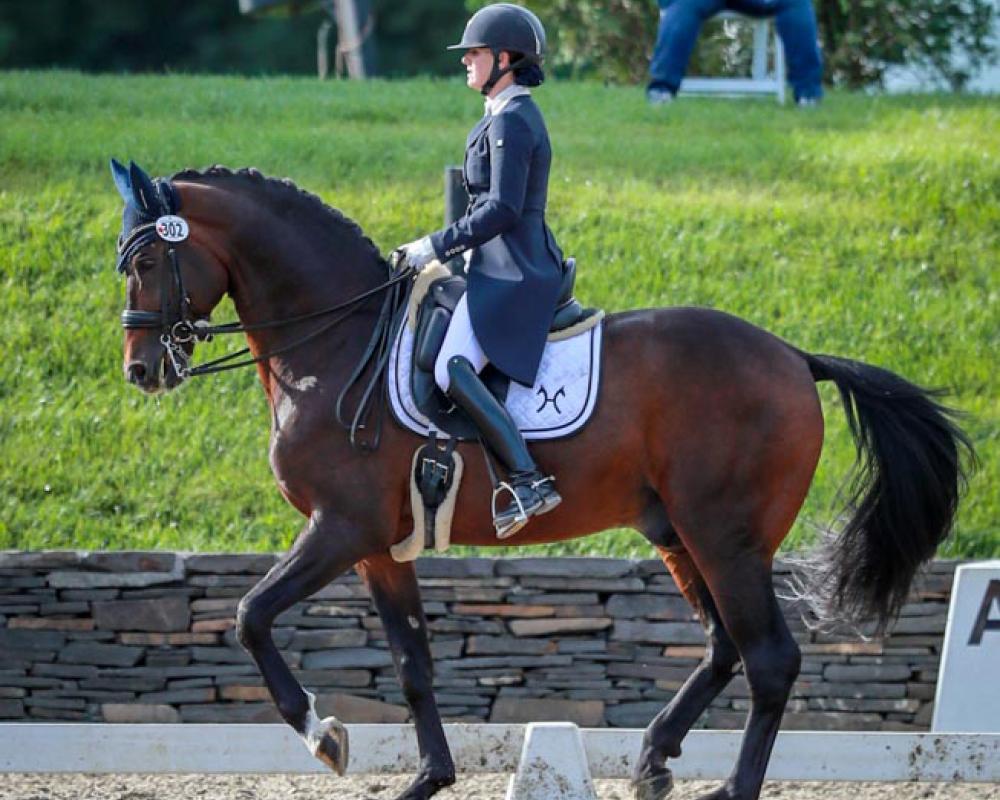 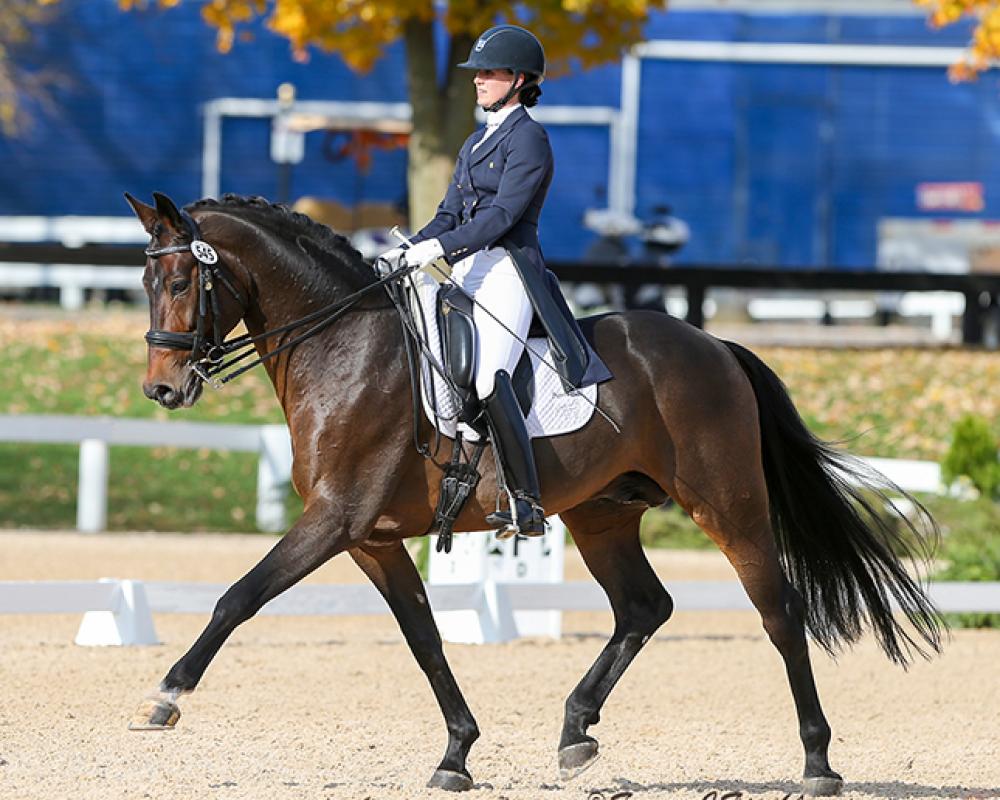 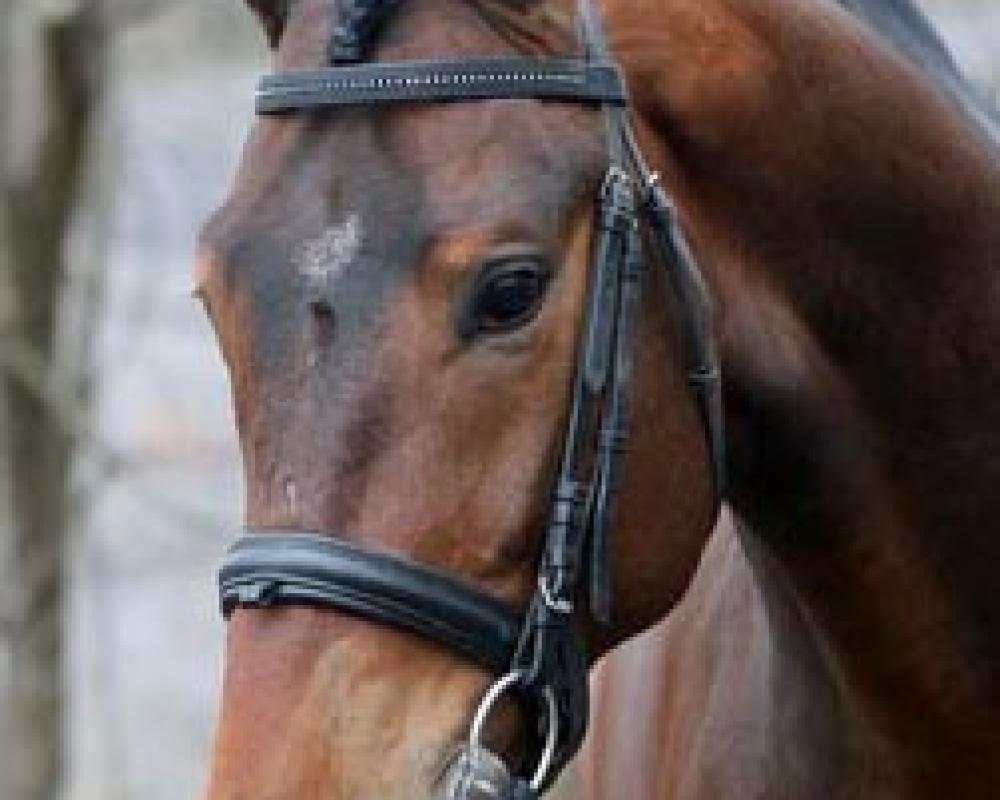 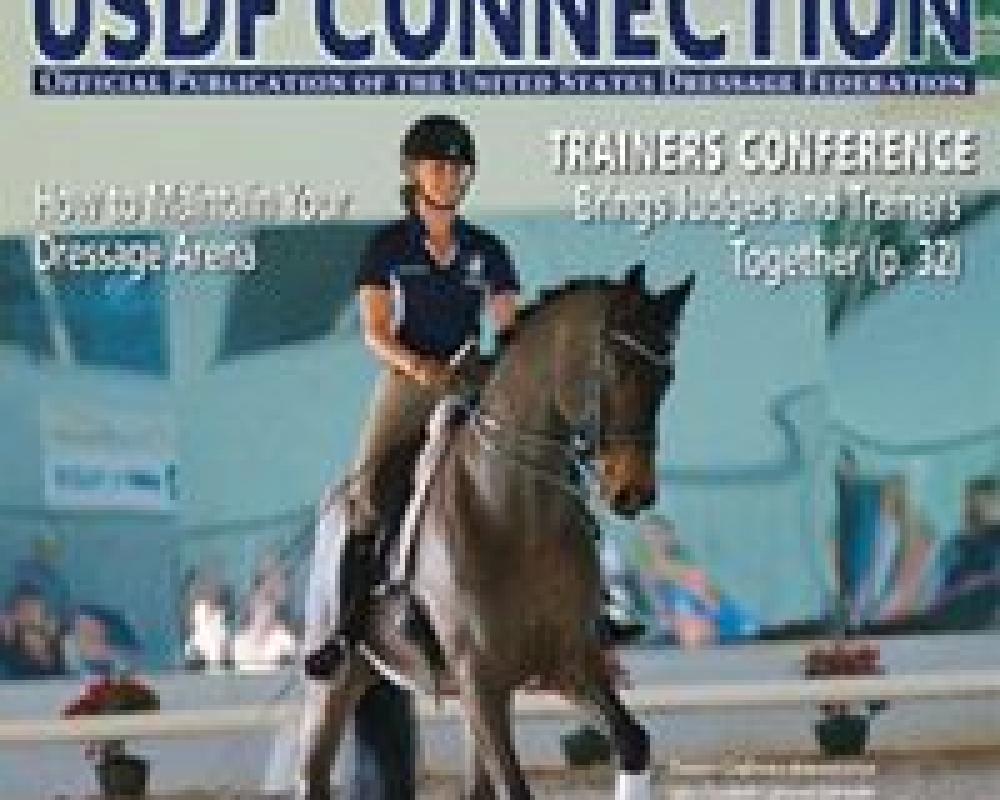 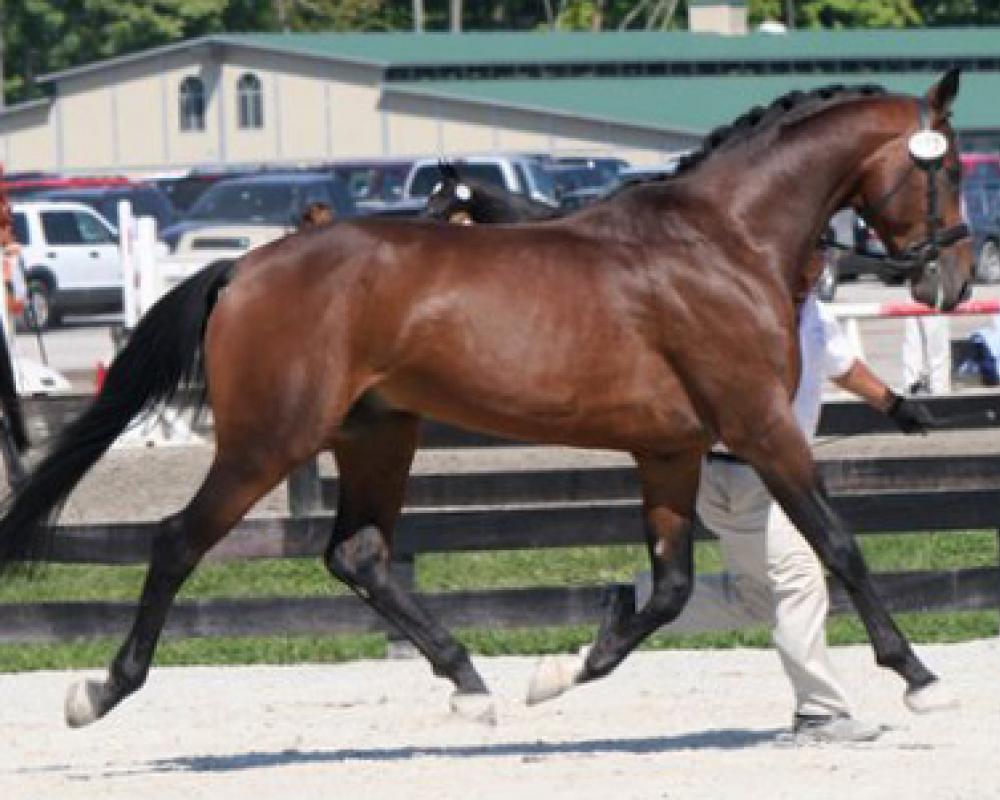 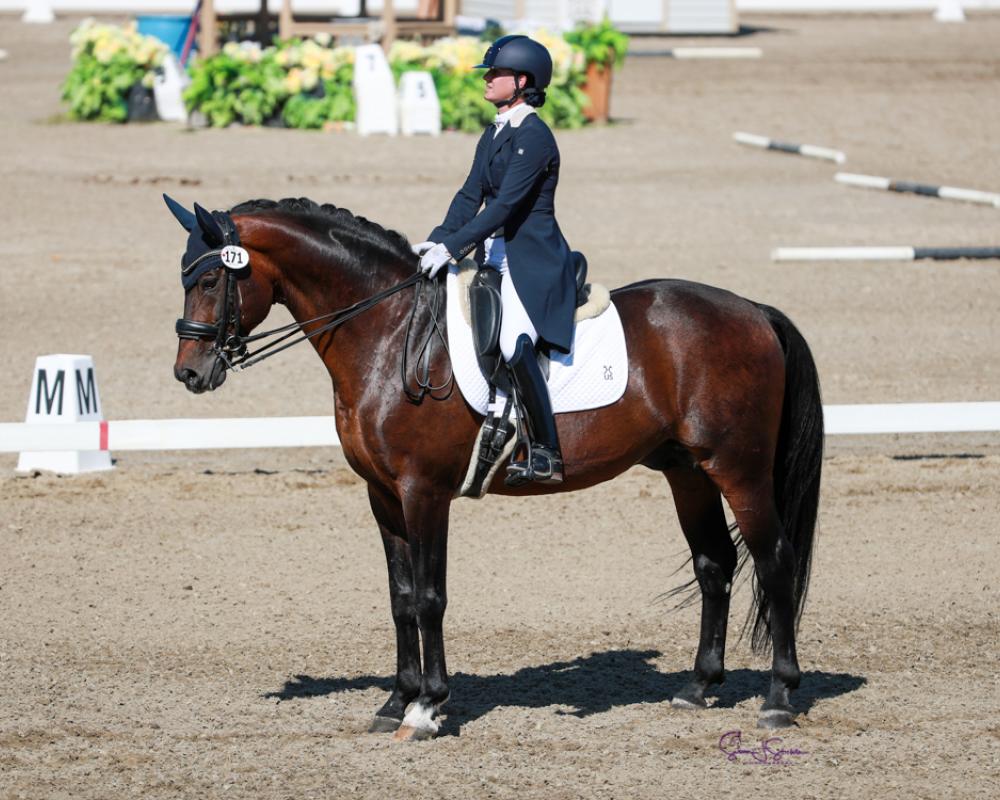 Schroeder a world class FEI Grand Prix bred Dressage stallion. He continues to win in the dressage ring with many championships. Competing at FEI Grand Prix dressage and winning many championships. He is producing top offspring that are also doing well in the breed shows and dressage shows. All known to have his beautiful type, super temperament and trainability, leggy, tall and extremely athletic. The riders, breeders and owners love them! See his web page or follow him on Facebook for news of him and his offspring.

Schroeder's Dam, SPS Esmeralda was 2002 Champion mare at the Loius Wiegels Show and took 2nd place at the prestigious Ratje-Niebuhr show.
The stallion Warhol by Western Star is out of the mare Wegola by Wendelin, a daughter of Gotha, Esmeralda's grandmother. He is placed up to Grand Prix Level and was licensed as a two-year-old, but was never active as a breeding stallion.

Esmeralda's Mother Gute, produced Summersby by Stakkato, who is successful in showjumping at S-level under Olympic Champion Lars Nieberg.

Grandsire Escudo I was the winner of the stallion performance test in 1994 and achieved a convincing 144.90 points in the jumping category. He also won the 6 year old Showjumping Championships in 1997. Escudo I is a son of the Celle State stallion and 1995 Stallion of the Year Espri who is known worldwide for producing outstanding jumping horses, he produced 58 Grand prix offspring (8 dressage/50 jumping) including World Cup winner E.T FRH, Enrico, World Breeding Champion Edgar, Olympian Esprit de Valdemar and in dressage German Grand Prix A team member Elvis VA, ridden by Nadine Capellmann. more pictures and video at www.majesticgaits.com

Visit our other stallions at stud and over 50 frozen semen stallions stocked from Holland and Germany www.majesticgaits.com

Majestic Gaits is a KWPN-NA Gold level breeder who has been breeding quality successful Dutch Warmbloods since 1984. We are partnered with the largest famous stud farm in Holland VDL Stud, home of the late Stallion of the Century Nimmerdor. Standing the approved KWPN Dutch stallion Navarone by Olympic Jus de Pomme, the Oldenberg approved Dutch Stallion Dante MG by Chin Chin and Hanoverian stallion Schroeder by Sandro Hit. We distribute frozen semen for over 50 approved stallions in Holland direct for the owner for the lowest price (including Indoctro, Corland, Carlton Hill and more). We are not a reseller, but a direct distributor for VDL Stud in Holland. We are a proven breeder of top quality horses and partners with the famous VDL Stud in Holland. In 2012 #1 USEF Dressage Sport Horse National Breeder, 2012 KWPN-NA Breeder of the Year, 2012 #1 KWPN-NA Jumper Foal , 2012 #1 KWPN-NA 2 year old Jumper, 2012 Again ALL First Premiums KWPN-NA Keuring, Our offspring are winning at shows! You can get your top mare lines and International bloodlines here! No need to import!
Email Seller Now
Visit Seller Website
More Horses From Seller