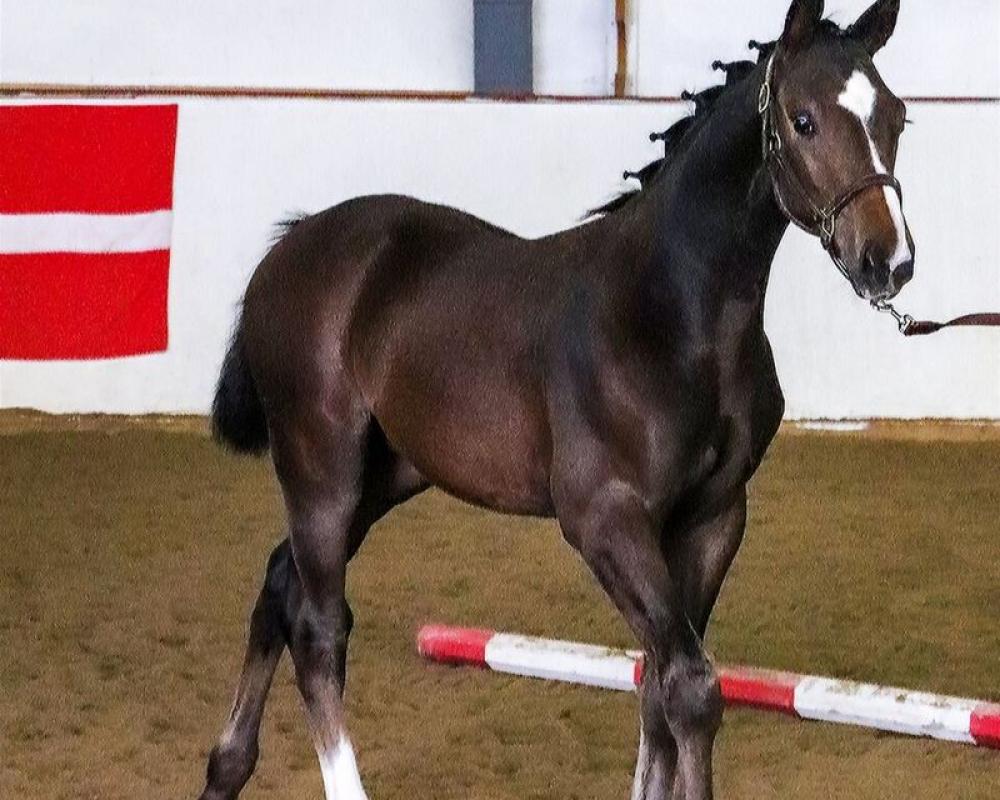 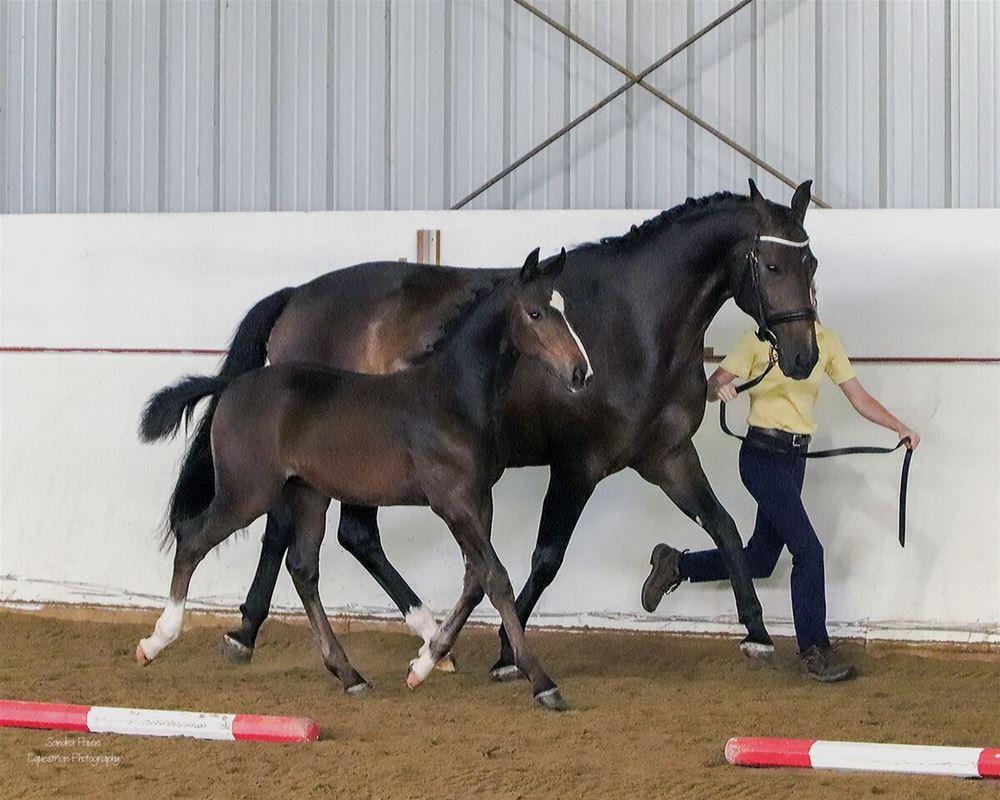 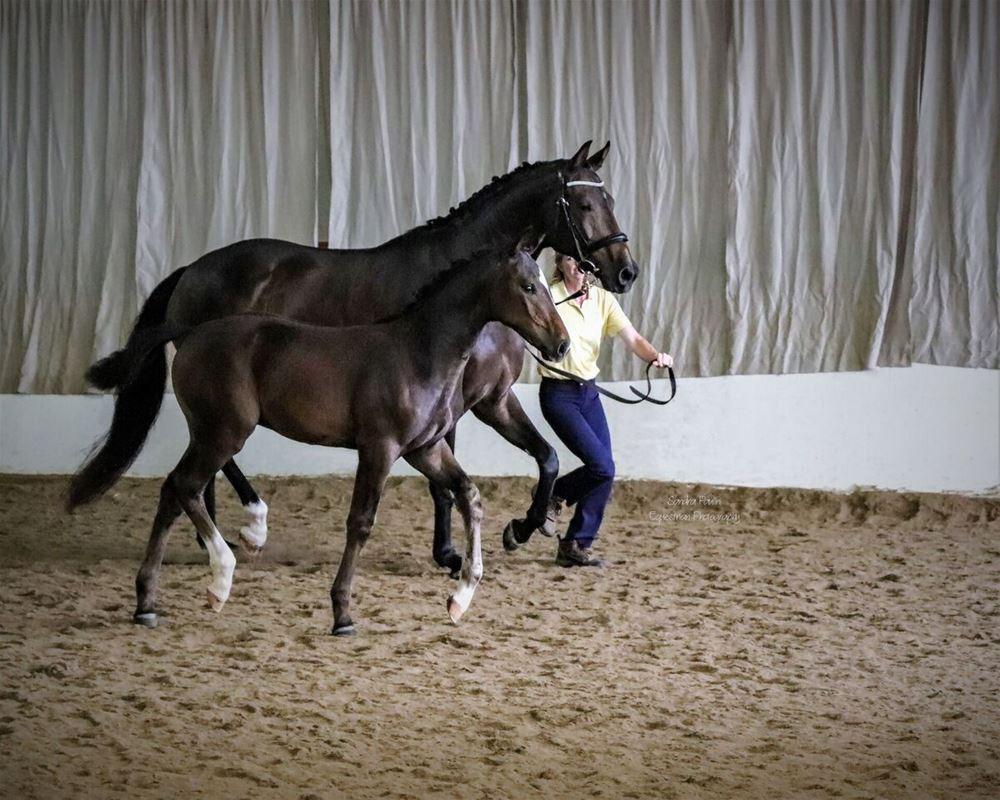 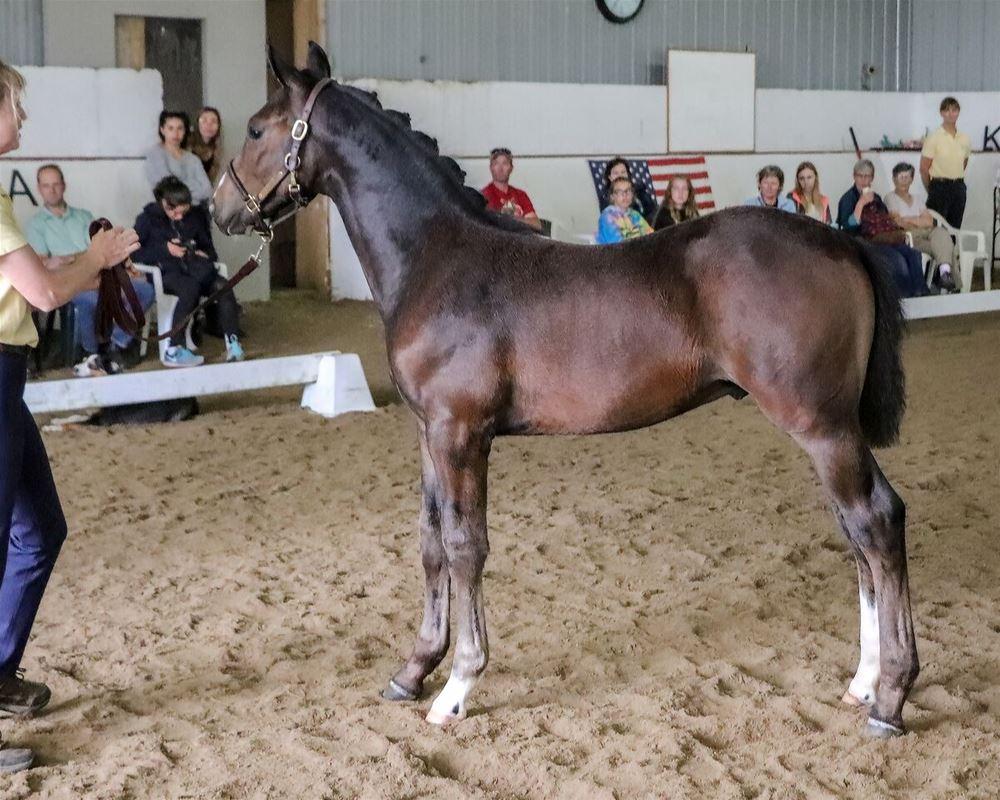 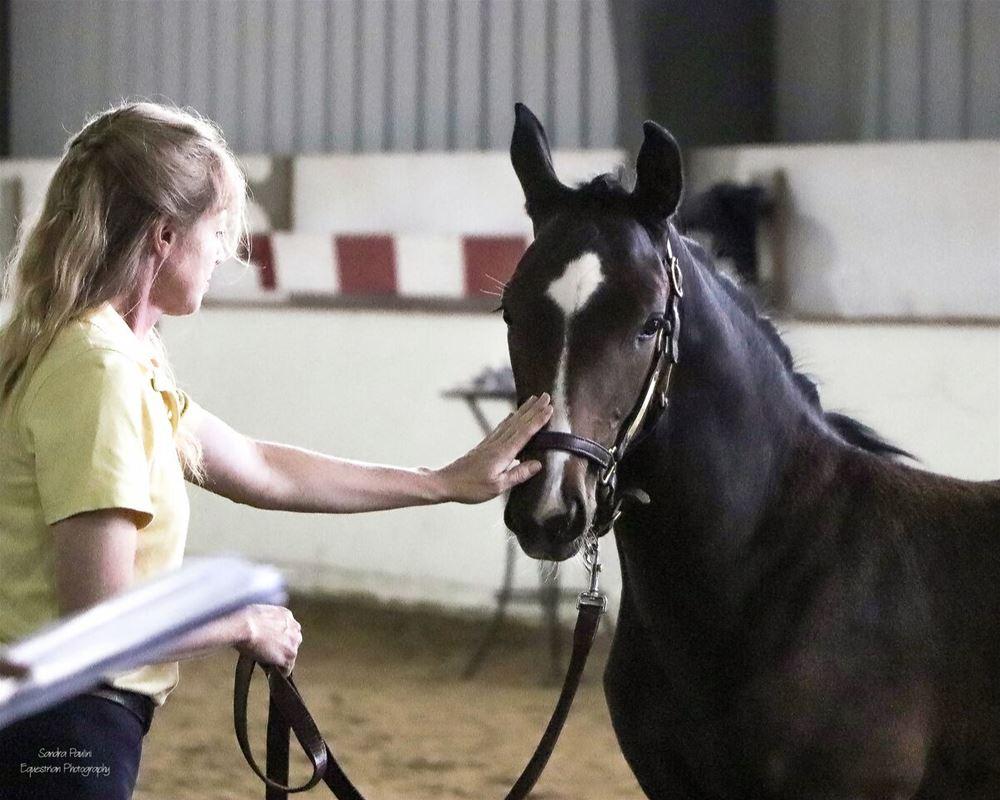 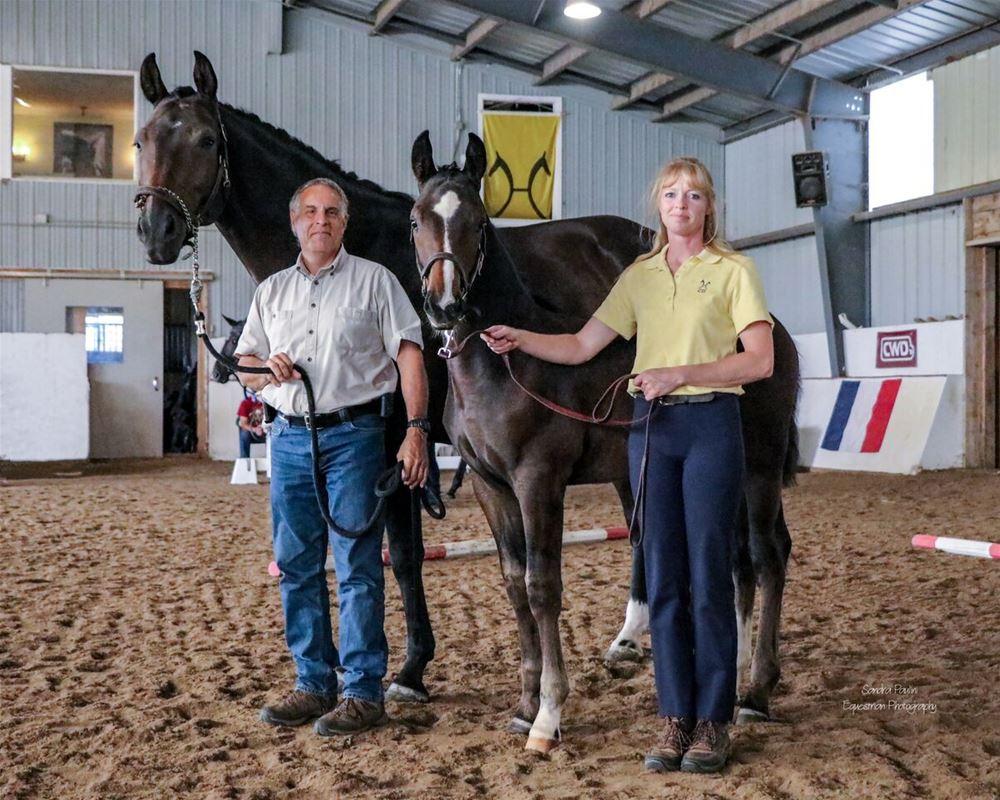 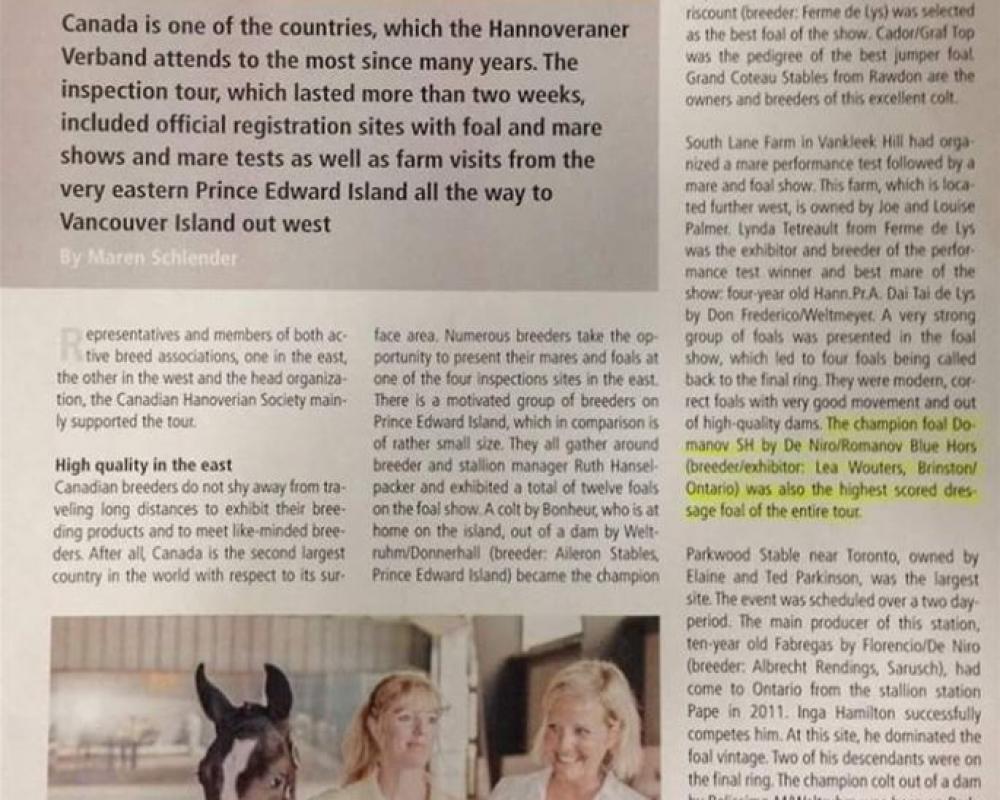 This stunning colt was born May 3 2018. The sire is the world famous De Niro and the dam is our Premium Hanoverian Mare Romanesque MLW, who is sired by Blue Hors (Glock’s) Romanov out of an Imported Elite Hanoverian Mare by Donnerhall.

We believe this colt should be an outstanding dressage prospect capable of reaching the highest levels of dressage sport.

Dakari was presented at the Hanoverian Inspection that was held in Vankleek Hill on August 31, 2018. Dakari received many positive comments from judges Inga Hamilton and Maren Schlender.

Although Dakari is currently a bit "bum high" in the photos due to his stage of growth, you can see he is a well built colt with good bone and comments were made on his correct legs, good joints and nice head and neck set.

Dakari is also a very kind colt and is good to handle. He is quite relaxed about most things. He is level headed and not a "spooky" boy. I really love his personality.

The full sibling to this colt (who was Romanesque’s first foal) was not only the site champion of his inspection, but was awarded the highest scored dressage foal of the entire 2016 tour!
The last photo is actually the article on Dakari's full brother. They look very similar.

Sire De Niro (recently deceased), has an impressive resume. He is a legend in both dressage sport, and as a top producer of high performance dressage offspring, many of which are competing at the Grand Prix level.

In 2012, Six De Niro offspring travelled to the Olympic Games in London. For Germany: Desperados ridden by Kristina Sprehe, Dablino under Anabel Balkenhol, as well as the reserve horse, D'Agostino ridden by Fabienne Lütkemeier. For Spain, Delgado ridden by Beatriz Ferrer-Salat, for Belgium, Donnerfee under Claudia Fassaert, and the reserve horse for Canada, Devon L ridden by Diane Creech.
To read more of De Niro’s lengthy and impressive resume, here is the link below, to Klosterhof Medingen.

Dam Romanesque MLW completed her Hanoverian mare performance test in 2014. She scored very well attaining the title of Premium Mare Candidate (formerly known as Elite Mare Candidate) and was awarded the 1A prize! With the birth of her first colt, (full sibling to this one) Romanesque received her Premium Status.

Diva fulfilled her Mare performance Test in Germany in June of 2005. She won a 1A prize the same year, making her an SPA mare.

Diva who belongs to Mary Lou Pitz Winn fulfilled her Elite Mare requirements (SPS title had her foal been born in Germany) by producing a lovely colt named Flamboyant, a stunning Florencio son.

In 2010 a daughter of Romanov became Mare of the Year in Belgium and once again he left his stamp on the Danish Elite Mare Show with nothing less than five daughters awarded a medal.
His offspring are highly successful under saddle which was once again proven to be true in Verden in 2010 where both Skovens Rafael and Hønnerups Driver were placed in the final. Both of these youngsters are heading for an international career.

Along his immense success as a sire Blue Hors Romanov also shines in the international dressage arena at Grand Prix level. In 2010 he won the Medien Cup qualifier in Hamburg, he came second in Grand Prix Special in Verden, won the Grand Prix at CDI3* in Copenhagen and was placed 5th at the World Cup qualifier in Odense.

In 2011, Romanov placed at the international dressage shows in Hagen and Wiesbaden. He was second at the Danish Championship and was in the Danish at the European Championship in Rotterdam.

Other accomplishments include: Team silver medal at the European championships in Herning 2013!

Romanov was aquired by Gaston Glock for rider Edward Gal. Romanov is now also known under the name Glock’s Romanov.

Romanov has had several victories with rider Hans Peter Minderhoud with whom he qualified for the Olympics in Rio, year 2016.

Romanov is out of very strong performance bloodlines. His dam line is based on the foundation mare Rudilore II which was an international eventing horse.

Photos are of 2018 Dakari and the article on Dakari's full sibling Domanov who was foaled in 2016.

We are looking for a serious dressage rider for Dakari as it would be fantastic to see Dakari with someone who can bring him to his full potential. Please contact us if you are interested in this stunning colt.

Terms
Serious Inquiries Only please. This is a very nice colt.