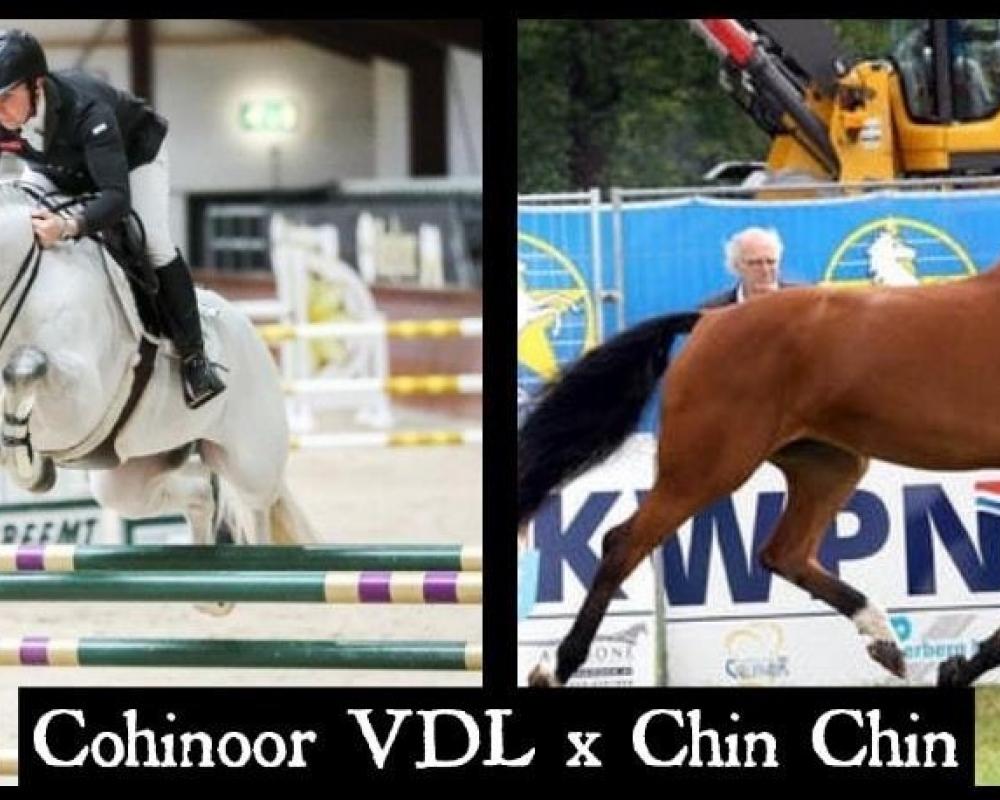 Cohinoor has a pedigree to dream of: Olympic world-class sire Cornet Obolensky combined with the true producer of show jumpers Stakkato and the Holsteiner legend Contender, anchored by Hannovarian ‘prestatie’ sire Graf Grannus. Ridden by Marco Kutscher, Cornet Obolensky was among the world’s best jumpers and he is sire of top horses Cornet d’Amour, Cornet’s Cristallo, Clooney, Cornado NRW and Comme il Faut.

Grand sire Stakkato has jumped at the highest level for many years and is indispensable for today’s breeding as both sire and as dam’s sire. The legendary Contender continues to be represented by his offspring in top arenas around the world - for example Chiara, Carlo and Colore.

Cohinoor’s dam Sophia, is half-sister to the Westphalian approved stallion Cornwall - Reserve-Champion of the Bundeschampionat for 7-year olds and jumps internationally at 1.45m level. In addition to Cohinoor, Sophia is also dam of the mare Carissma; who received a ‘10’ for her jumping technique and of the approved premium stallion Lanzardo. Great-grand dam Grafin Galexia jumped at the 1.45m level herself.
Additionally, the Westphalian and Hanoverian approved Call Me Number One is a son of Cornet Obolensky being bred out of the same dam line as Cohinoor. Call Me Number One jumps at Grand Prix level.

Palmares
Cohinoor was approved by the KWPN with a fantastic score of 83 points and was one of the highlights of the KWPN stallion test. Cohinoor scored an 8.5 for reflexes, technique, rideability & attitude and talent as a show jumper. For the remaining jumping components Cohinoor earned 8’s. Cohinoor stands out due to his appealing blood-type and his light-footed way of moving. At the fences, he impresses with his reflexes, technique and easy way of jumping. These qualities are seen in his first sport results: Cohinoor finished as 3rd in the ranking of the stallion competition 1.10m class. He jumped very steadily with much balance and very good technique. These abilities continued to develop in the stallion competition 1.20m class with clear rounds in Ermelo, De Peelbergen and Zuidbroek.

Offspring
The first offspring of Cohinoor are appealing foals with expression; they are well developed with a light-footed canter, remarkable liftoff, suppleness and balance.

Dam Elize is awarded ‘sport and elite’, granddam Reve de Beauty (placed in the Wordlchampionships for 5 year olds in lanaken) is full sister of Joli Coeur, ridden by Franke Sloothaak (1.60m) and of the approved stallion Papillon de la Cour (1.40m).
Other sporthorses from this damline are: Umberto (1.60m), Voice of Beauty (1.40m) participated at the Worldchampionship for young horses when 5 and 6 years old, and Icarus de Beauty (1.35m).