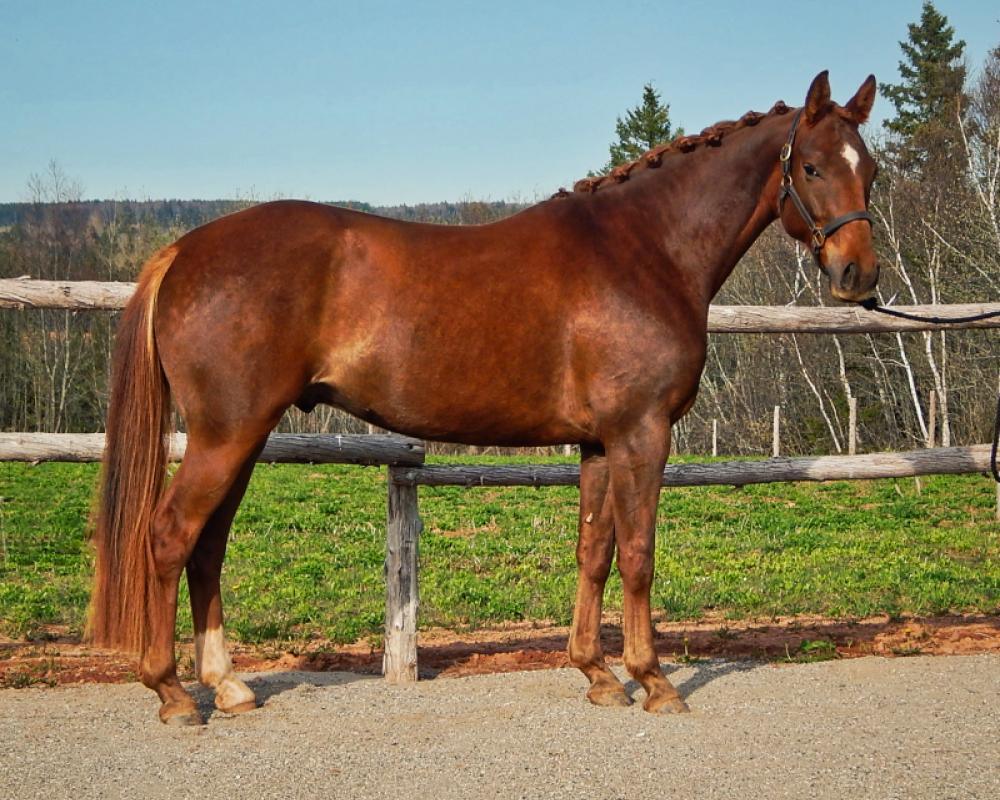 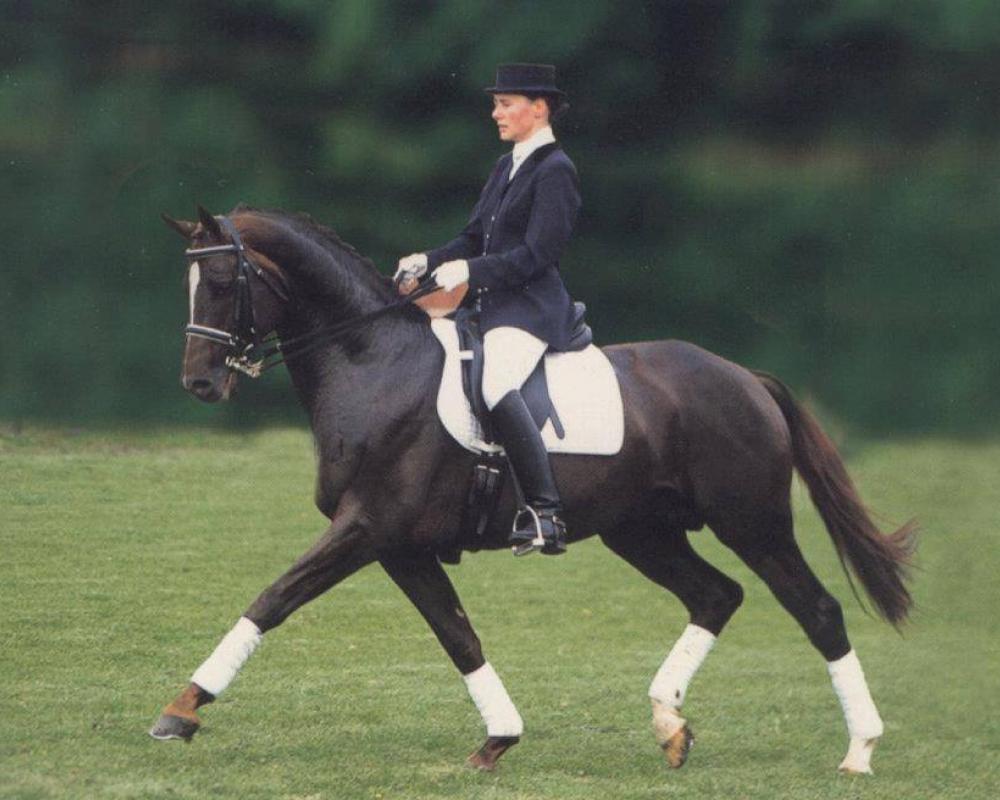 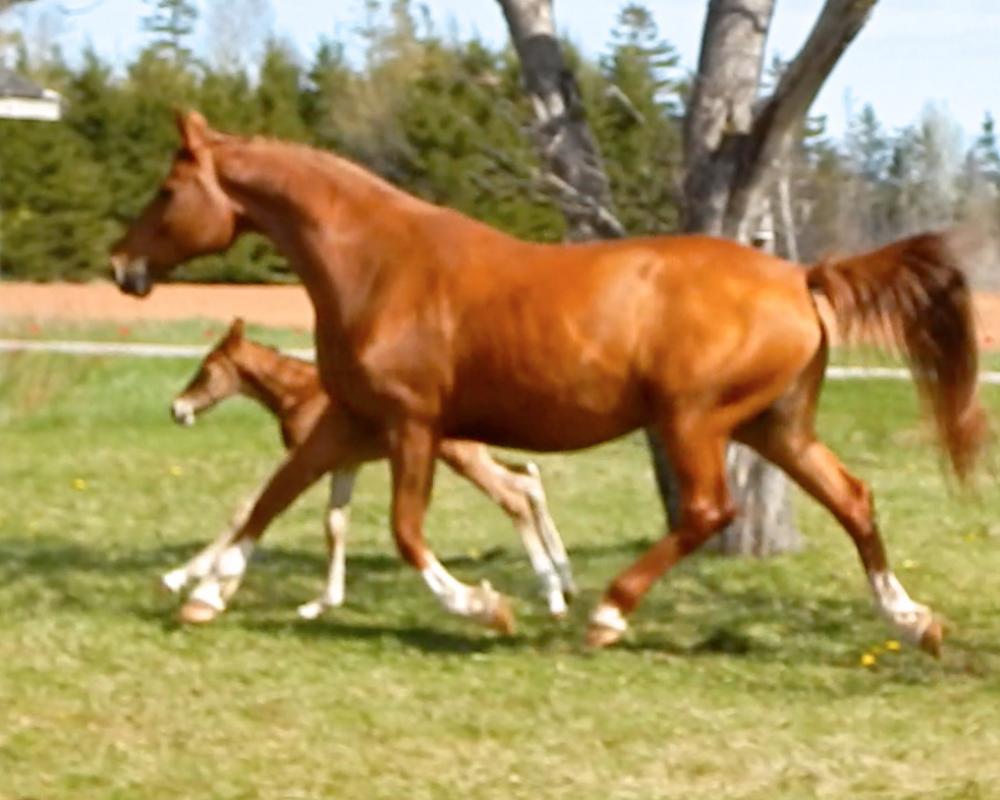 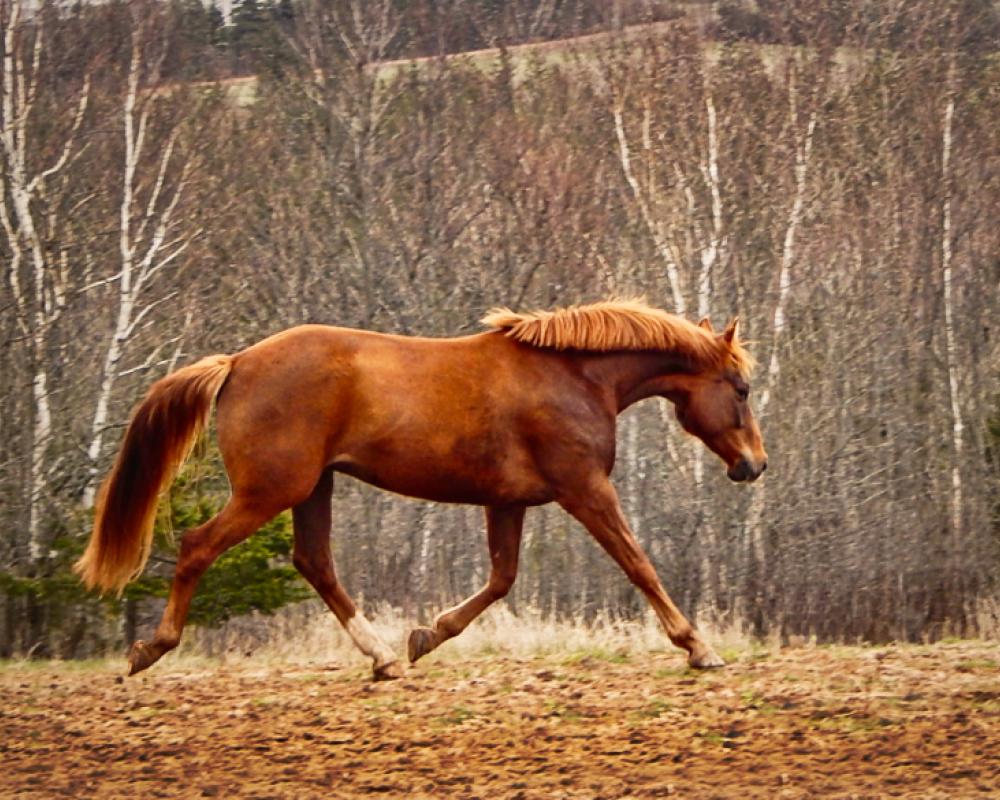 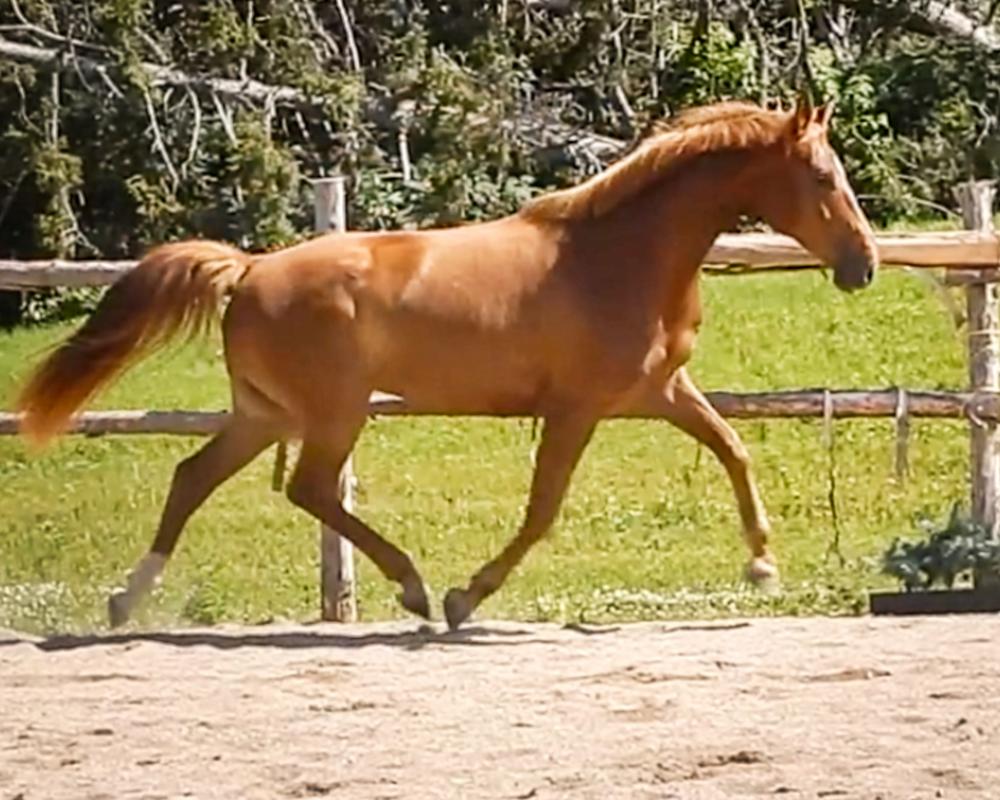 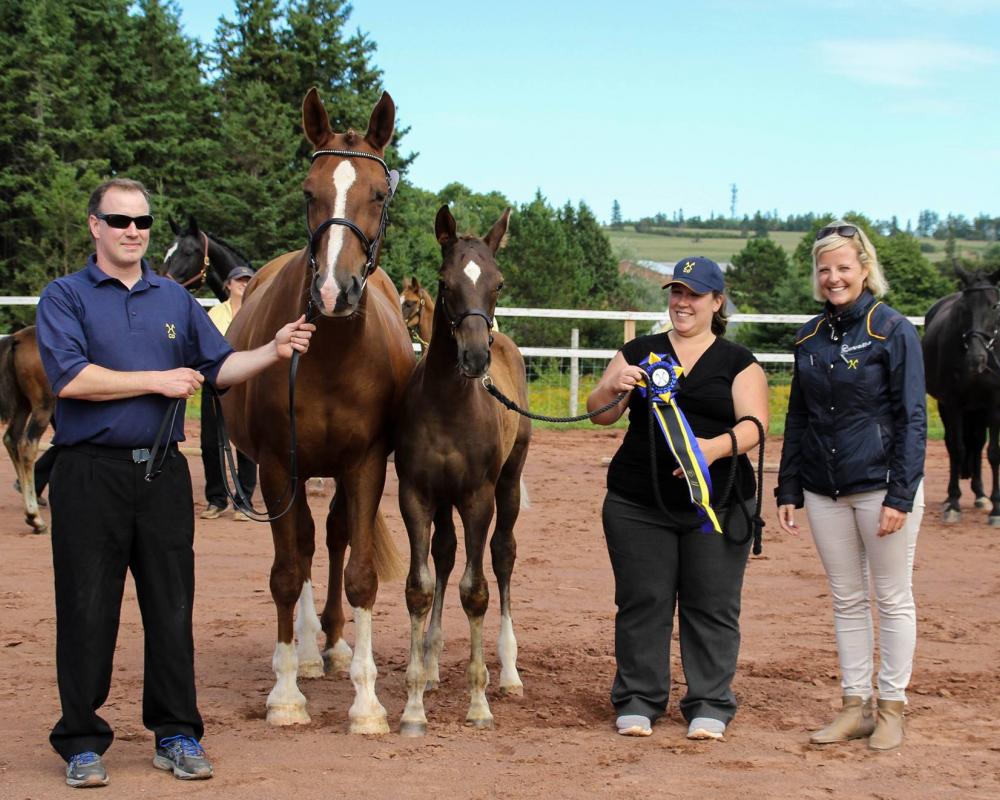 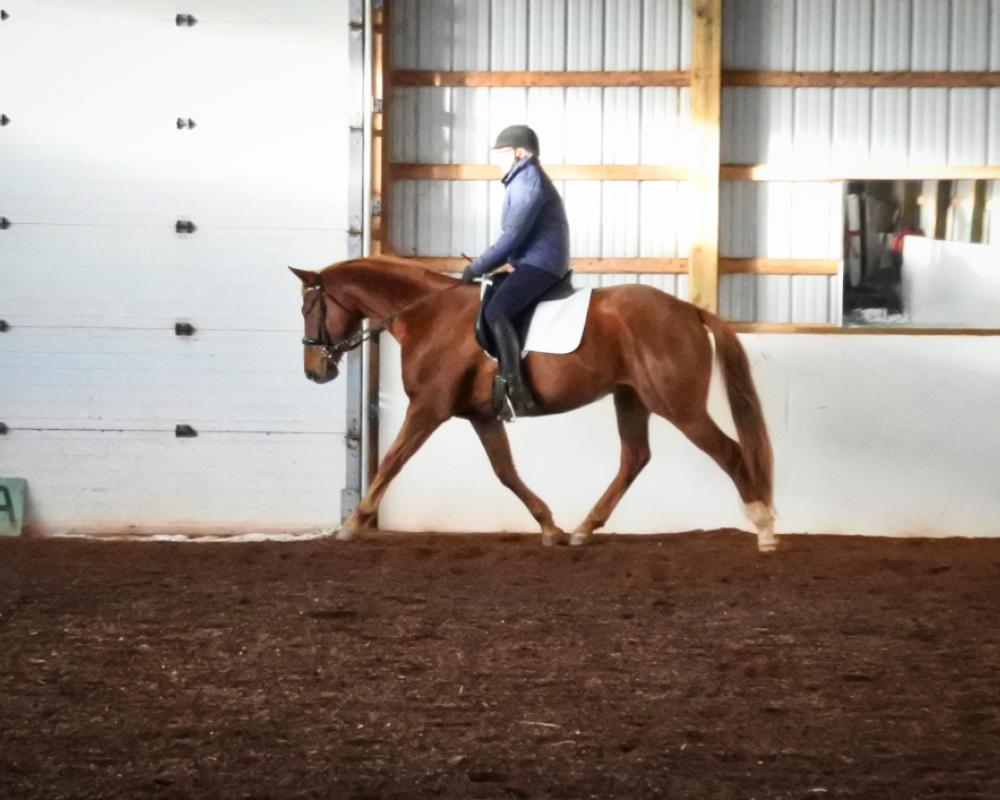 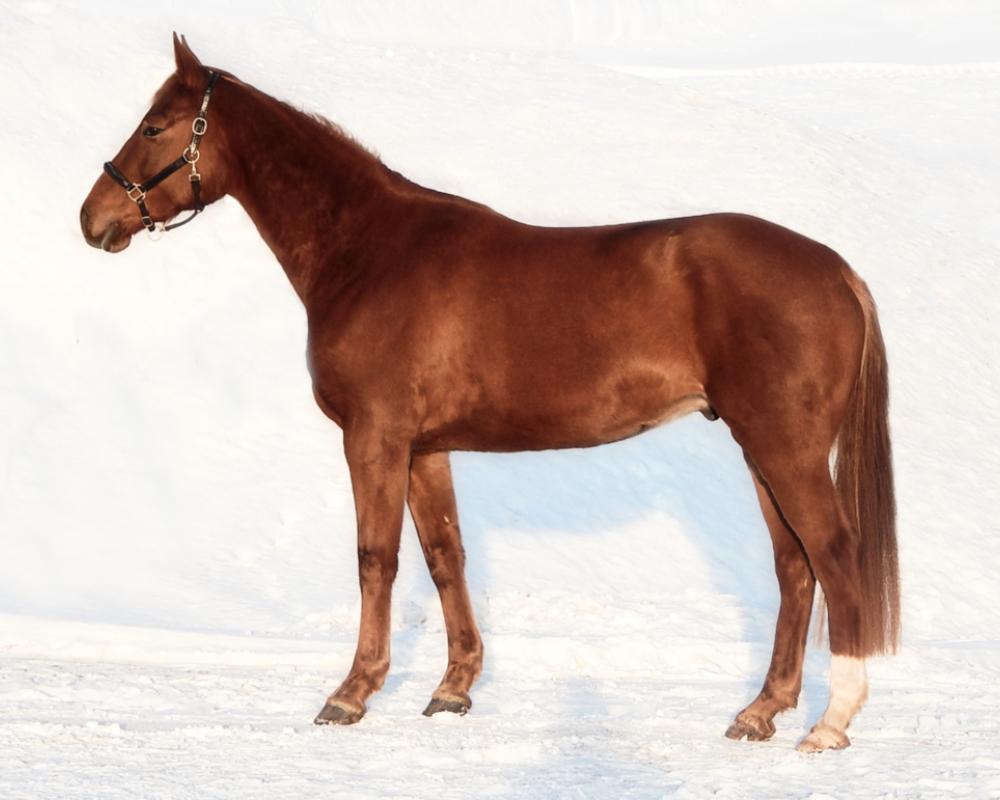 Bellamy was Reserve Champion at his Hanoverian inspection out of 12 foals. Big gentle boy with LOADS of power in the hindquarter; collected work will be easy for this guy! The judge at his inspection noted his correctness of leg conformation, powerful gaits and suitability for dressage, and awarded him reserve champion out of 12 foals. Upper level dressage prospect with an earnest and sweet temperament (shameless flirt). Also suited as a hunter prospect with the gaits to shine in the hacks, as well as willingness and carefulness over jumps and poles. Sticked at 16.1hh in November 2019, and expected to mature 16.2+hh.

***As of January 30th will have completed two month of training with professional dressage trainer.***

His sire, Bonheur, won the Championship Stallion Show in Griesbeek, Holland in 1997 and qualified for the Bundeschampionat in 1998 as a five year old. As a six year old, he won the prestigious Nobilis Cup in Bremen, Germany. He has won numerous dressage shows in "S" Level. His offspring are very elegant with tremendous rideability. They have shown high performance ability in dressage, bringing Bonheur's breeding value in dressage to the top 10% in Germany with an overall 150 points. Bonheur has offspring competing in both S class dressage and jumping.

Bonheur's sire is the legendary Brentano II. Brentano II was a foundation sire for the Hanoverian breed. Sired by Bolero out of renowned brood mare Glocke (by Grande x Ferdinand), Brentano II became the 1985 Hanoverian Licensing Champion, 1986 reserve stallion performance test winner and Hanoverian Stallion of the Year in 2003. Brentano II's most famous offspring in the dressage ring were Debbie McDonald's Brentina and Sven Rothenberger's Barclay II. Both competed at the 2004 Olympic Games in Athens.

Bellamy's dam sire is the famous Contucci of Hilltop Farm. Contucci won the dressage portion of his 100-Day Test with an impressive 147.11 points, earning six 9’s and overall Class I status. He then successfully showed in Germany, winning a Bundeschampionate qualifier with 9.2 out of 10 possible points. He has sired over 80 Premium offspring, annual Inspection Site Champions, numerous Elite and Premium mares, and four Licensed sons. The show ring results of Contucci’s offspring have been even more impressive. Rideability and trainability are qualities all riders appreciate. Contucci offspring have shown great success in dressage, eventing, and show hunter.