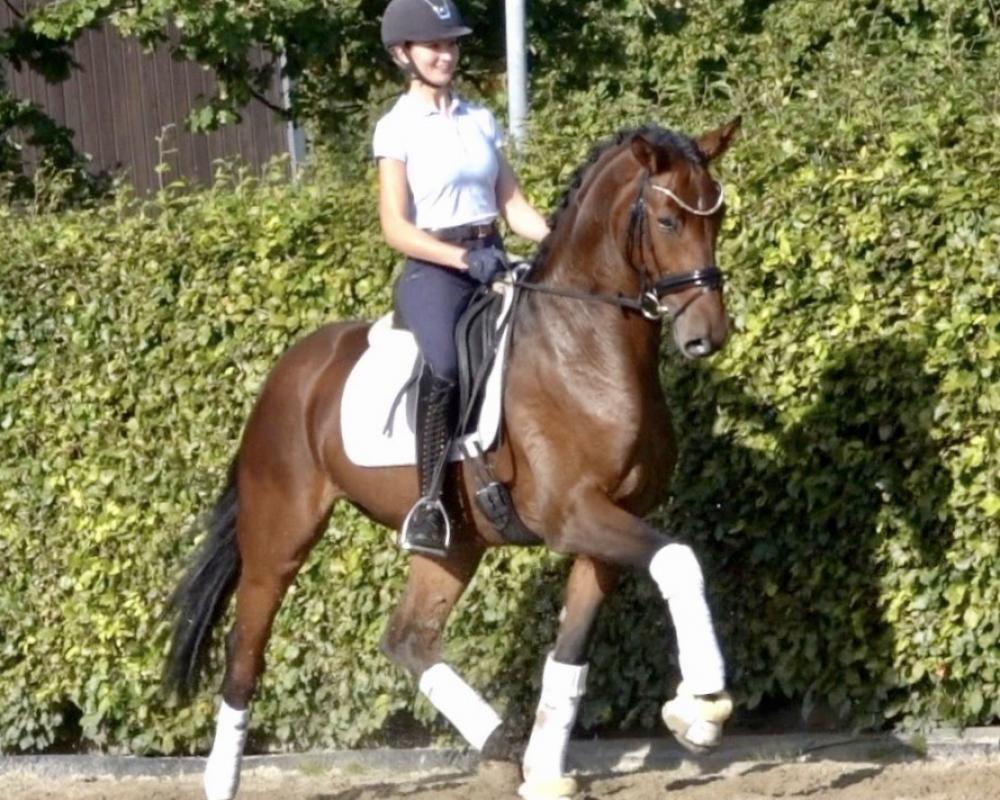 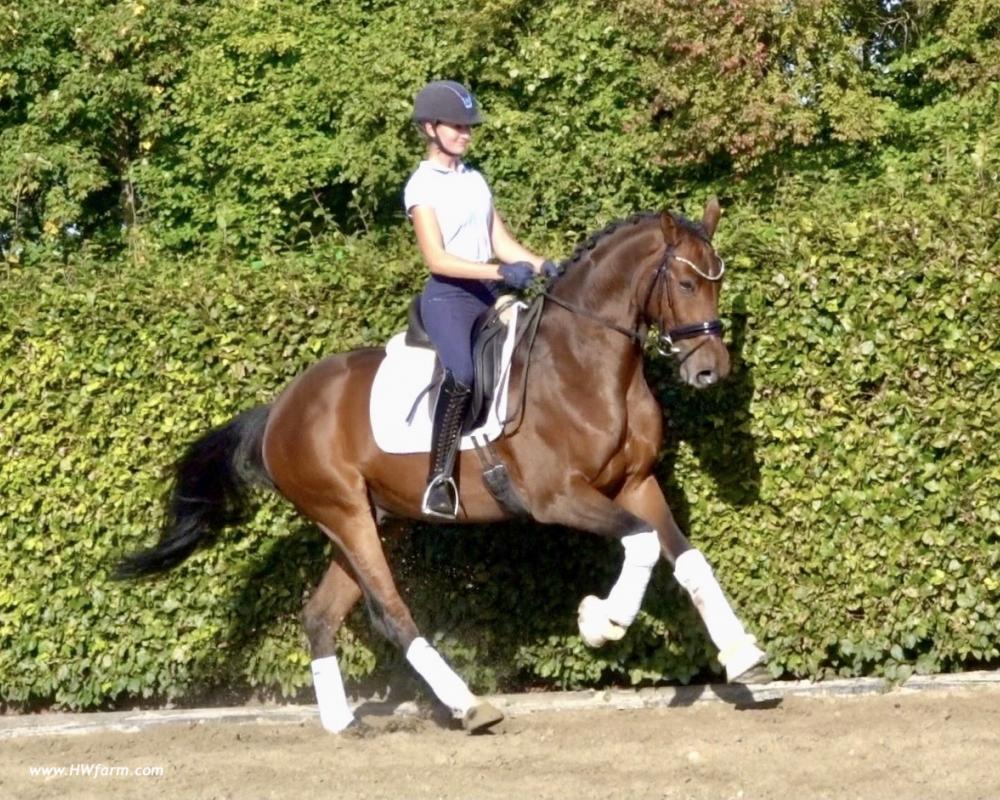 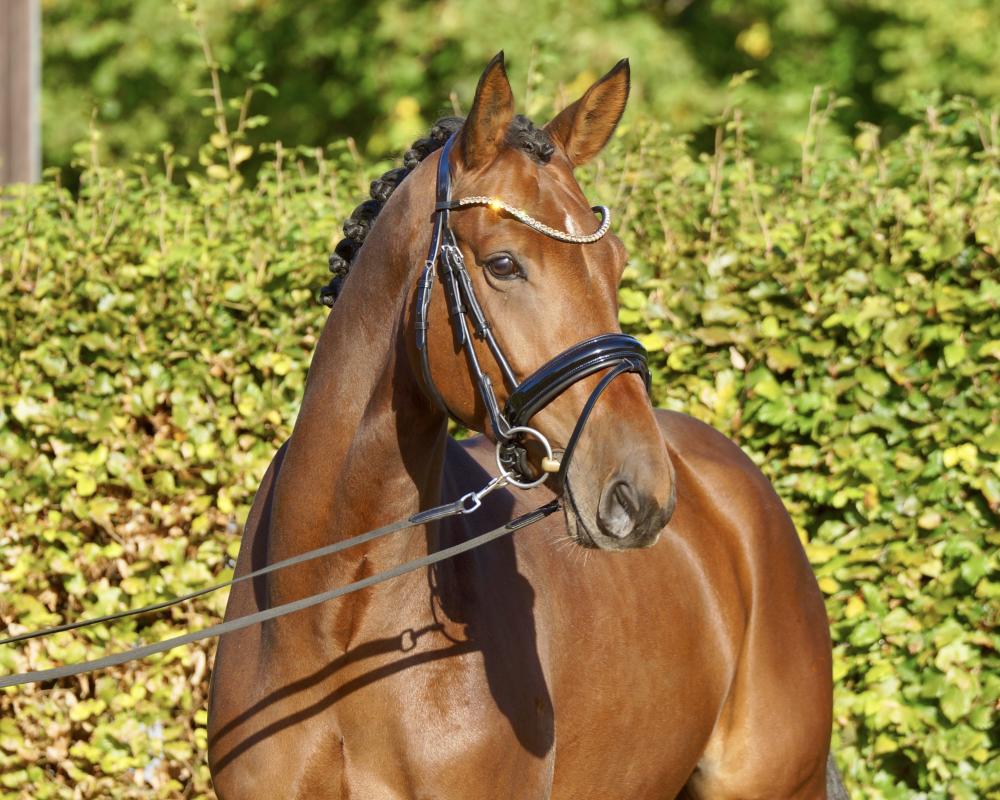 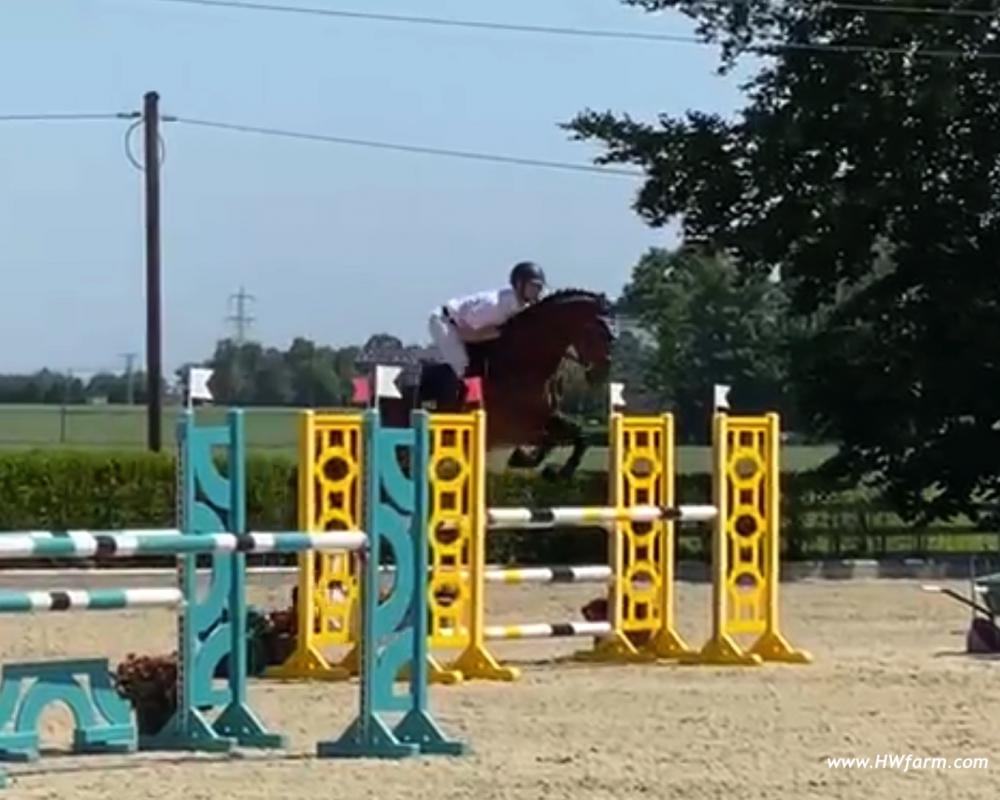 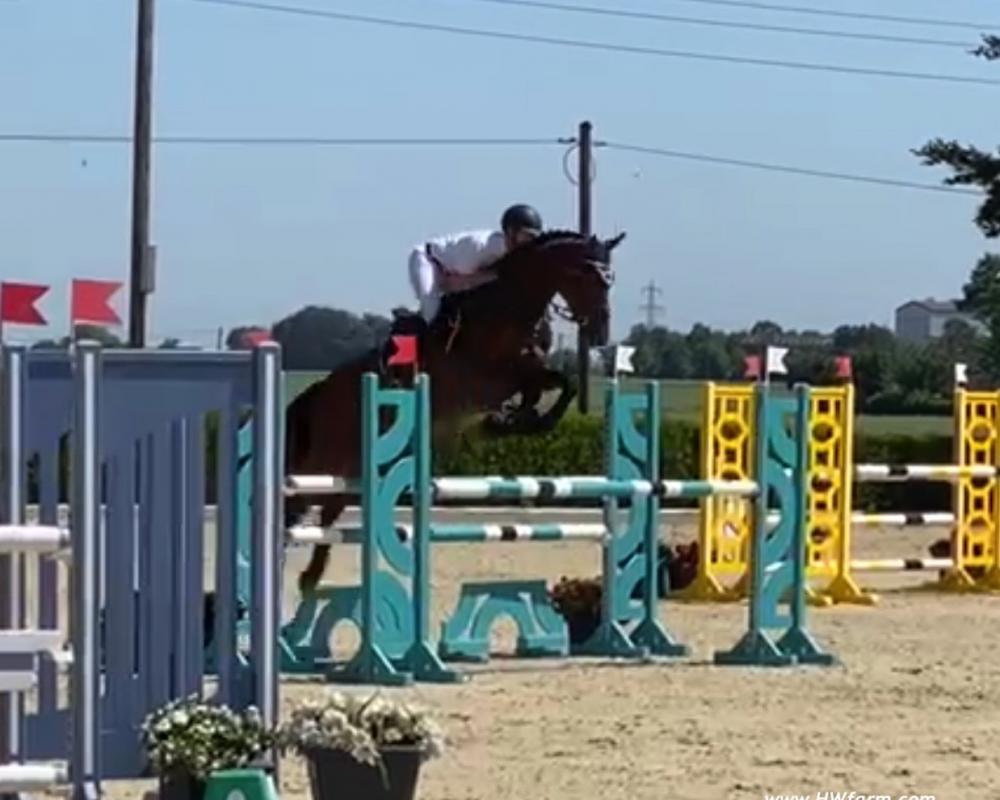 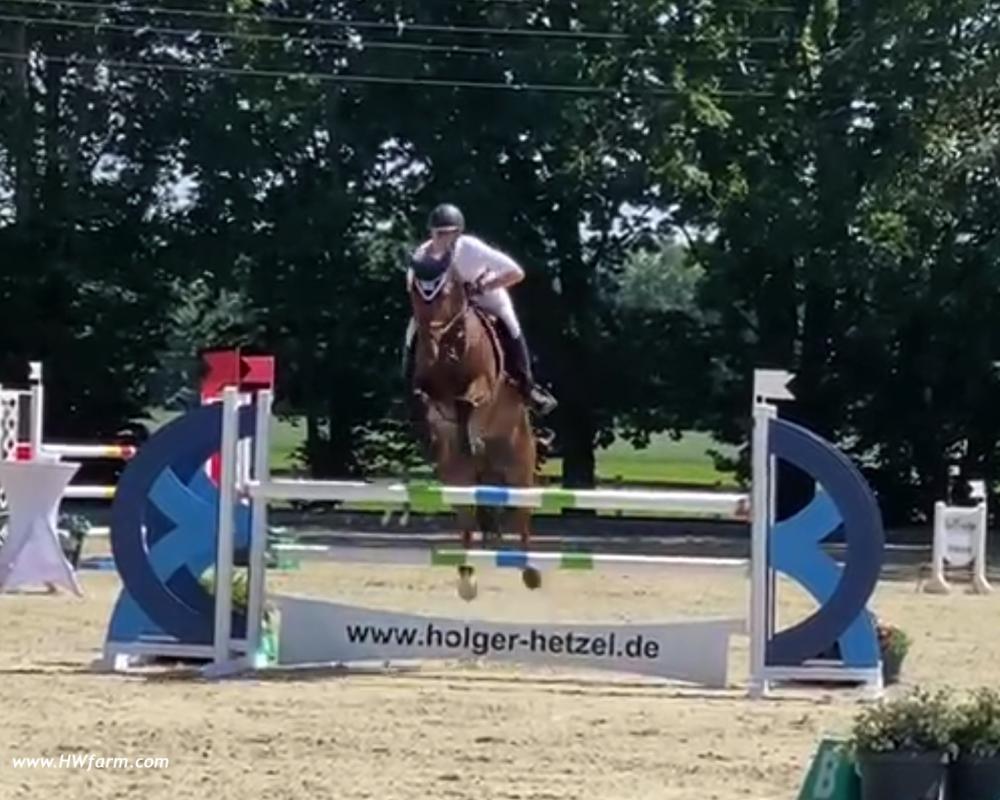 Multi talented young star, dressage or over jumps,
he loves it all!

Bezos Boy HW is by the famous stallion Brantzau, an extensive and textbook pedigree of accomplished sires: Baloubet du Rouet, Carthago, Coriander, Schampus xx, Ronald, Moltke and Ramzes. Baloubet du Rouet and Carthago both jumped at the Olympic Games, as did many of their offspring.
The dam line is the world-famous Holsteiner line 104a. This line begins with Ramzes-daughter Retina, who in her time was one of the world’s best Grand Prix show jumpers, and here contributes her extraordinary genes in breeding. Brantzau’s great-grand dam foaled three 1.40m and 1.50m show jumpers. Behind his great-grand dam is the mare Odetta - dam of the approved stallion Landetto and grand dam to the top sire Corland. From this line not only come stallions Landego, Caretano and Contendro I, but Grand Prix horses like Acoretto, Clapton, Corlanda, Nerrado and Corradina.

Palmares
Brantzau is a modern sport horse with blood, height and long lines. He has a powerful gallop and jumps with much scope, push-off and quick reflexes. He finished third at the stallion selection of the Selle Français studbook in France and is also approved by the Holsteiner Verband. At both stallion shows he impressed with his jumping skills and received many compliments by both the press and judges.

At a young age, Brantzau has already been approved for several studbooks. Last year Brantzau received excellent notes in the performance test in Schlieckau. For jumping, Brantzau was given an average score of 8.30 points, and received a 9 for his free jumping.

Brantzau did well at his first competitions earning high scores for jumping. Brantzau won the qualifier for the Bundeschampionat in Tasdorf with an 8.5 for jumping. In addition he took five more wins at competitions in Germany with high marks in every class, ranging from 8.4 to 9.3.

Offspring
Brantzau seems to pass his qualities in breeding. His first offspring impressed the German stallion inspections - three stallions were approved and they stood out because of their ability at the jump.

Bezos Boy HW’s dam is the phenomenon in horse breeding, Baloubet du Rouet. Whilst he never stood at stud in Germany, 300 of his progeny are registered in Germany with 130 successful up to advanced level/S level. Amongst his 25 licensed sons in Germany, the lifetime earnings millionaire Balou du Rouet is an absolute exception. Baloubet du Rouet and Rodrigo Pessoa were seen as the dream combination in the international show jumping circuit: they won the World Cup three times, and in 2001, they narrowly missed what could have been their fourth victory and instead became vice-champions. The pair won several Grand Prix competitions, one of them in Geneva. In 2000, they won the Team Bronze Medal at the Olympic Games in Sydney and in 2004, the Individual Gold Medal in Athens. In 2012 and 2013, Baloubet du Rouet was the leading sire of the WBFSH show jumping world ranking list. Currently he holds fourth place. Many of his French, Belgian and Dutch bred progeny are internationally successful, with Paloubet d’Hallong leading the way as the most expensive show jumper in the world.

His sire Galoubet A, ridden by Gilles Bertrand de Ballanda in the 1980´s, was one of the most successful horses in the international show jumping circuit at that time. He won, amongst other successes, 19 international Grand Prix, was placed fifth in the World Cup finals of 1981 and was a team member of the French Gold Medal team at the World Equestrian Games in Dublin 1982, where, in the individual round, he was placed fifth. Galoubet sired more than 30 licensed sons.

The dam, Mesange du Rouet also produced the internationally successful mare Linadore du Rouet. The grand dam produced Globule, who was dam to the known athletes Urtos du Rouet, Inadie du Rouet, Ondet du Rouet and Salsa du Rouet, as well as the stallion Quatoubet du Rouet. The dam sire Starter was a son of the internationally appraised thoroughbred Rantzau xx and through him was half- brother of the line foundation stallions Cor de la Bryère and Fier de Lui Z. In the fourth generation Baloubet is inbred again with Rantzau xx.

Bezos Boy HW could not be any prettier. He is perfect and will catch the attention of the onlookers and judges alike. Bezos Boy HW's temperament is exceptional.
He is very easy to handle on the ground and has outstanding ride ability.
This gentleman is at home in the dressage arena as well as he’d make a phenomenal hunter or jumper, depending on how you are riding him.
Bezos Boy HW loves to jump and gives 100% every time out and is a pure pleasure for his rider. He listens to the slightest aids, light in the hand and he has a great attitude towards his daily work.

He scored up to 8.5 jumping, winning A- as well as L-level already.

His beauty, gaits and way to handle every jump reliable and quiet make him the perfect hunter or jumper. Bezos Boy HW is a fast learner, he adjusts during play time and does flying changes when asked. He goes forward easily when you send him and slows down just as easy as well. He is a young star in development and his abilities will get him far.

He is well schooled on the flat with fantastic changes and can navigate any exercise, work-off, or jump-off with ease. He loves the complexity of the courses and is ready to take the rider through the tests. His gaits are comfortable and his jump is smooth, he'll leave from where ever you ask him to leave. He has a motor and carriers his own pace, letting the rider concentrate on their position. He’s a well rounded, very willing gentleman.

With his great work ethic and sweet disposition, Bezos Boy HW will make a fantastic addition to any trainer's stable. He is a uniquely useful, first class horse who can perform for his rider in all rings and will surely pile up the ribbons for his new owners.
He has plenty of room and talent to move up to the grand prix levels with time.

Please find all info and other horses at www.HWfarm.com