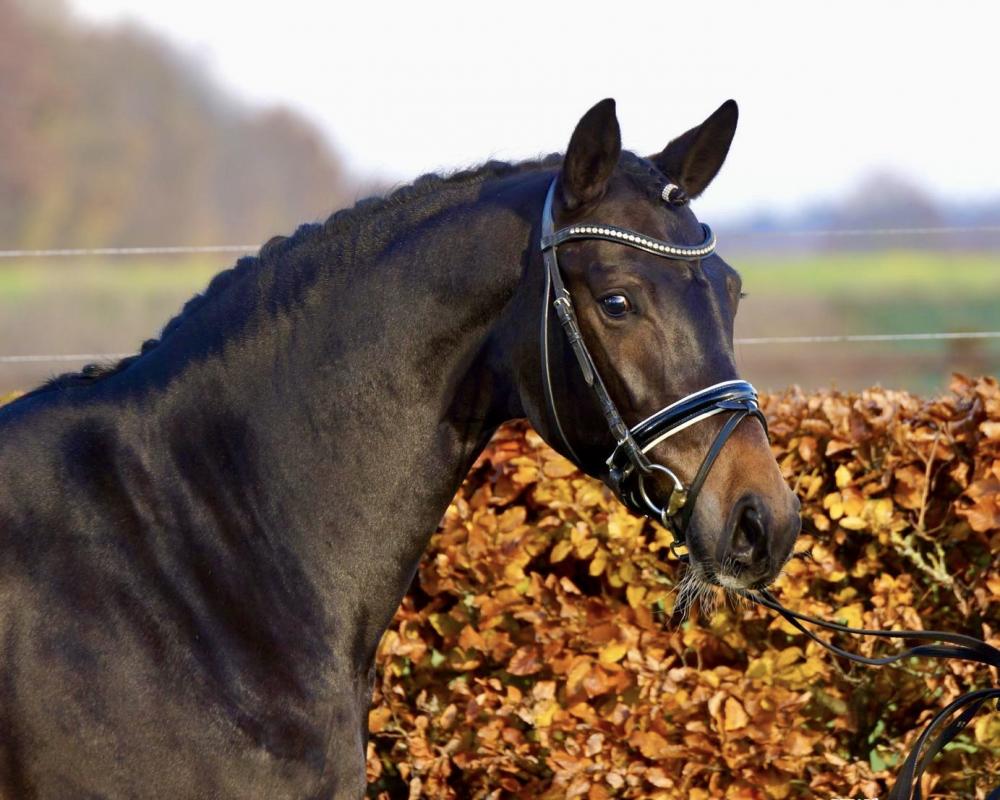 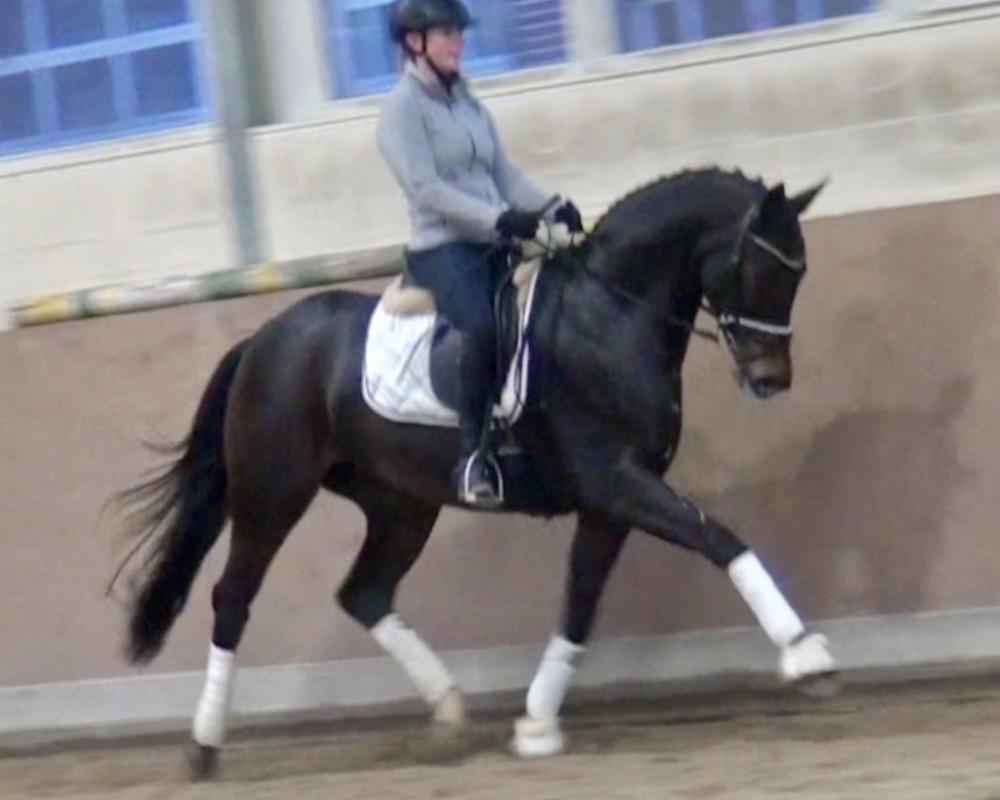 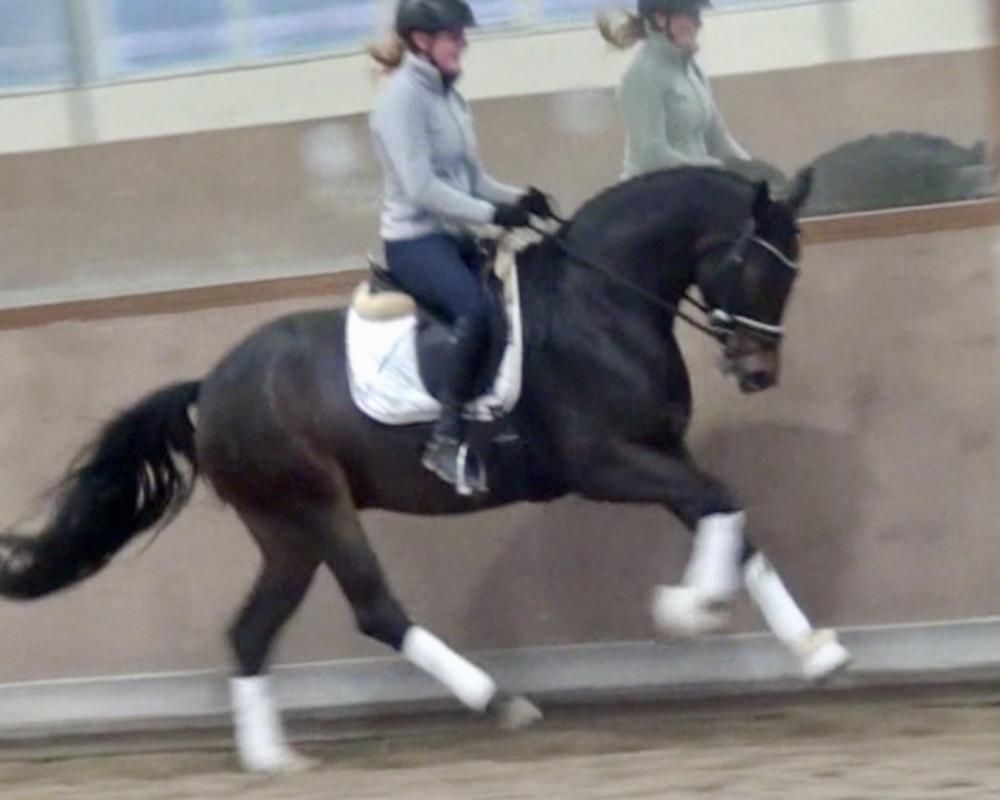 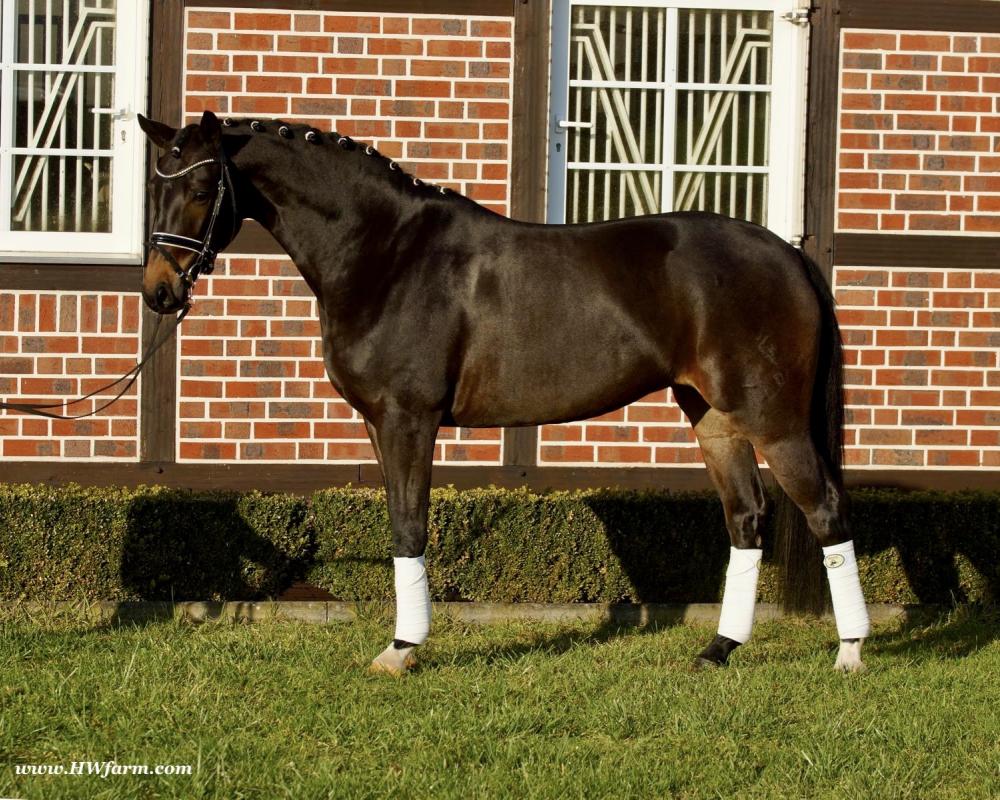 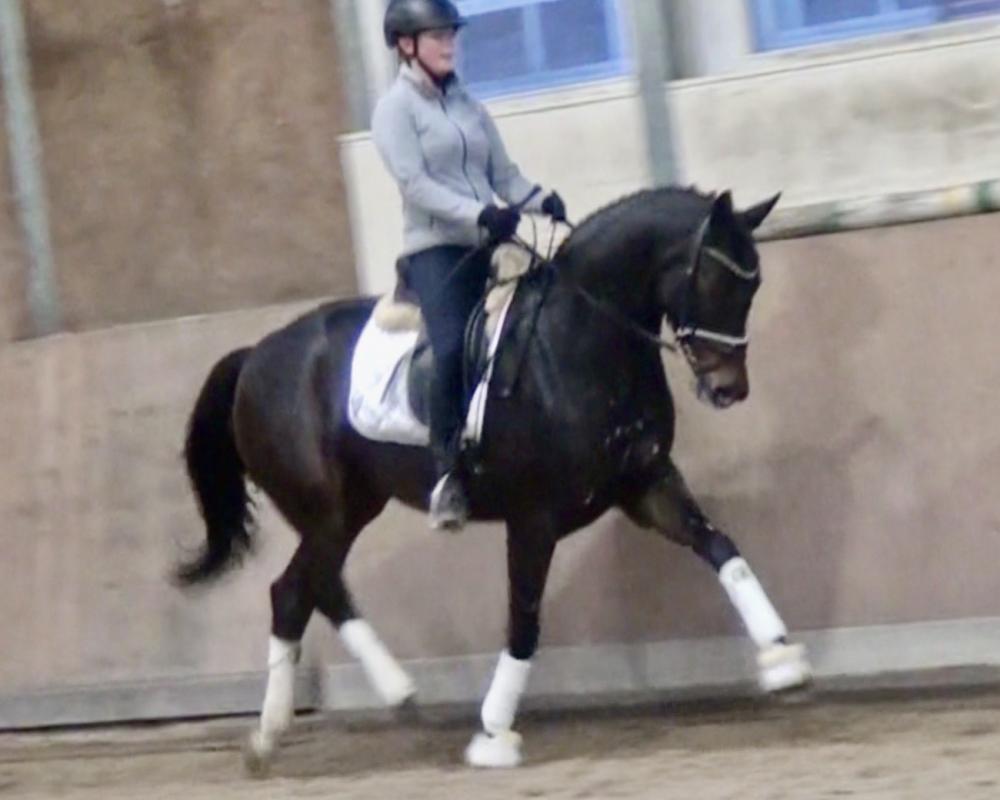 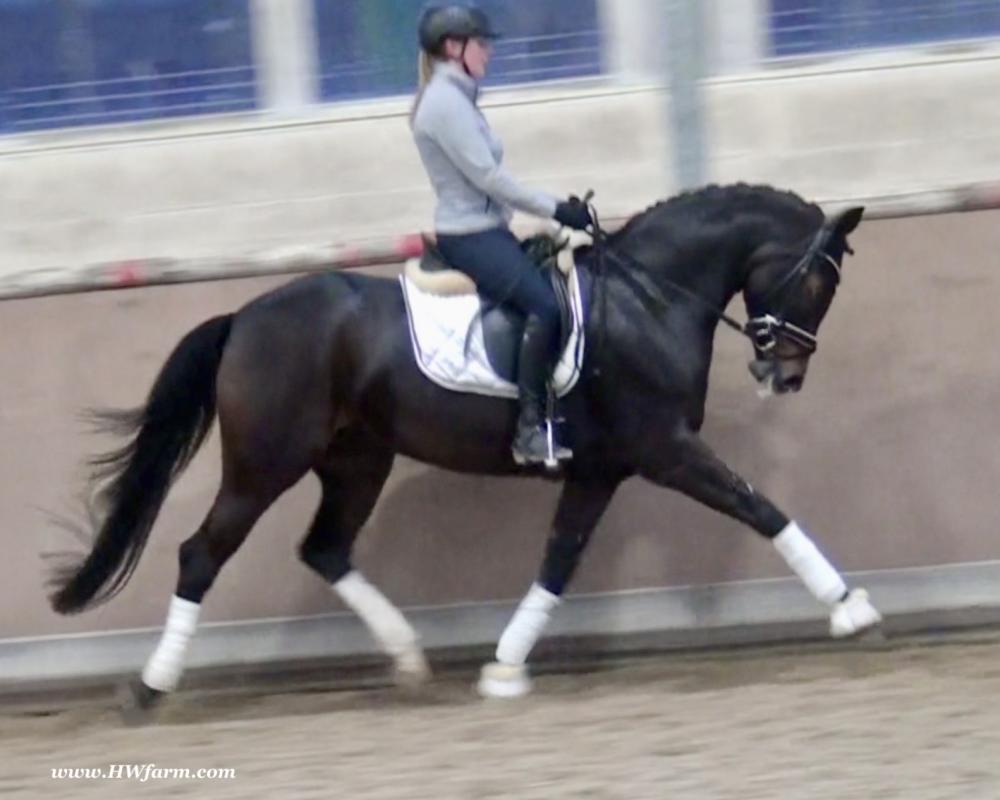 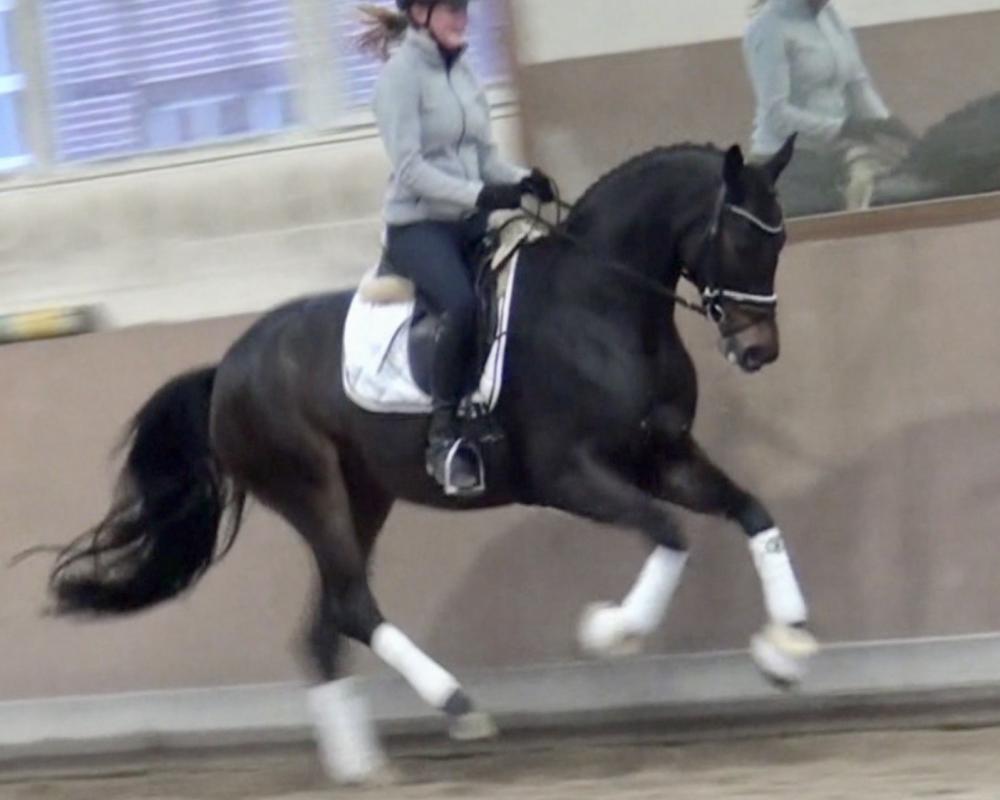 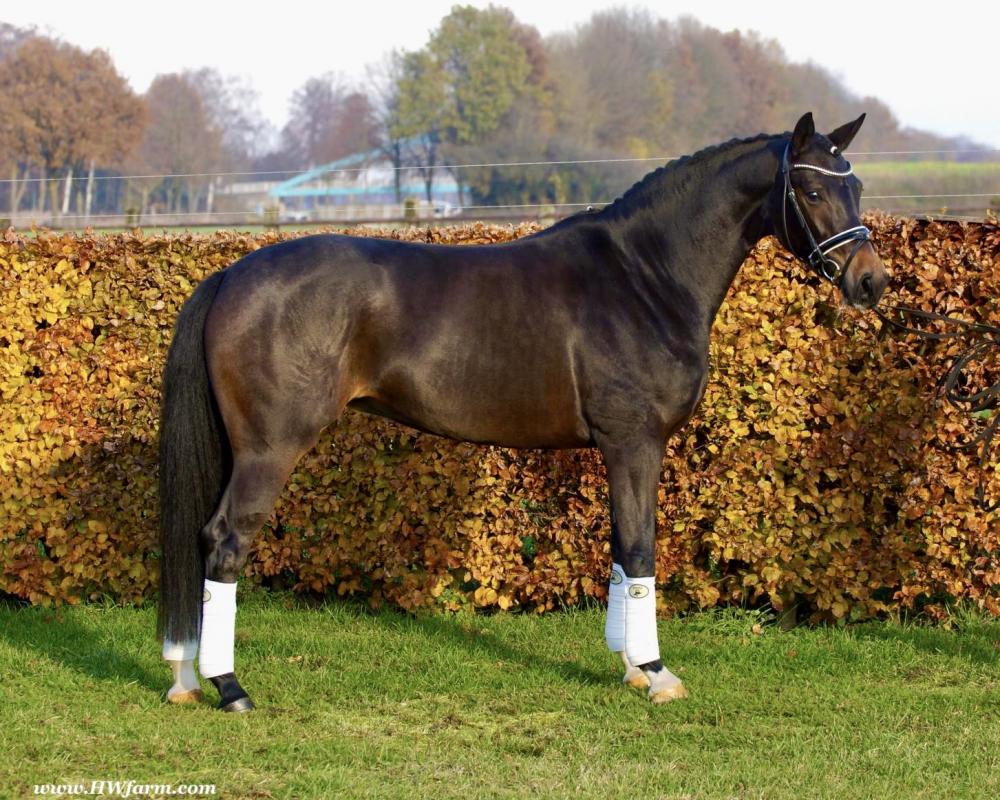 "Bon Coeur" - literally translated means "good heart"! With his heart in the right place, this extremely talented black horse can easily meet, perhaps even surpass, the expectations placed under saddle. This handsome black stallion is an exceptionally powerful and active mover. He has almost unlimited elasticity and shows already good carrying power in his hindlegs. His natural uphill movement and his unique work ethic coupled with the fascinating mechanics of movement in all its three gaits make him the epitome of the modern sport horse.

All of his natural qualities, coupled with the best rideability under saddle leaves nothing to be desired. His genetics are obviously inherited through strong dressage genes: his father Benetton Dream was Bundeschampion of the three-year stallions 2007, qualified at the ages of 5 & 6 for the Bundeschampionat. Now Benetton Dream has victories in several Grand Prix and moved in 2013 as Olympic hope to Tinne Vilhelmson Silvfén of Sweden, where he currently has a breeding value of 153 points. Also in this pedigree sire Sandro Hit performance impresses his own performance (Federal champion and champion of the 6 year old dressage horses), as well as his superior sires - (numerous Federal champions dressage Champion, several breed winner, offspring and World Cup successes in Grand Prix win).

In the third generation, we find well-tried Hanovarian performance blood from Carismo (test winner at the time) v. Calypso II, which had several times internationally winning offspring in both divisions of the tournament sport. Especially in combination with Sandro Hit, Calypso II has repeatedly delivered highly successful dressage horses. His Stallion Performance test at Schliekau was a tremendous success! He was the winner (in a super field of your stallions)with the following notes:

Blind Date HW’s dam sire is the BundesChampion Quaterback, it's the same dam who produced the BundesFoalChampion Ferdinand HW.

Quaterback is a stallion that seems like he could only come from another planet - with his light-footed, brilliant movement and perfect cadence, all eyes become riveted on Quaterback when he appears.

Quaterback comes from one of the most successful mare lines of modern day. His dam Passionata is a half-sister of the unforgettable World Champion and double Bundeschampion, Poetin. Her full brothers Samba Hit I to IV put on convincing presentations at the Bundeschampionate. Samba Hit I was also a finalist in the 2006 Nürnberg Burgpokal and the sire of Samba's Diamond who became the Champion Stallion of the licensing in Berlin-Brandenburg and Sachsen-Anhalt that same year.

Quaterback's successful advanced (S) level sire Quaterman also participated in several Bundeschampionats and is deemed one of the best sires for passing on good movements in the new German States. The grandsire Quando-Quando took 15th place at the World Championships in Aachen in 2006 under Kristy Oatley-Nist. With a pedigree geared for performance from all sides and from the famous Neustädter P family, all doors are open for Quaterback.

All of these characteristics are impressively documented in the FN's 2004 Predicted Breeding Value statistics.

9.5 Licensed for Berlin-Brandenburg, Oldenburg , Hanoverian This exceptional moving young stallion has already started his winning ways. Paired with the talented young rider, Christian Flamm of Hessen, Quaterback galloped away from the competition at the Bundeschampionate in 2006. He started his stallion career by being named Champion of his licensing in Neustadt/Dosse in 2005.

Blind Date HW, so pretty! Did you see the cute little head? She is a sensational mover in a super fancy package, leaving no wishes open. Already victorious at a foal show with her amazing dam, she grew up to mesmerize onlookers even more, now that she is under saddle. She is a very reliable lady. Her airtime is spectacular and so are her extensions. The canter is very uphill, round and so much fun to sit and ride. She has a clear beat to her walk. Collection does come easy to this compact little horse.

Excellence all around, gaits, looks and brain to match for all the way up. She has an impressive free shoulder, good motor, active hindleg and three very good and clean gaits, she is already working at 2nd level.

Blind Date HW will be loved by the judges and draw the attention to her at the show grounds and clinics, she is just really one of a kind and a true ladies horse. This young girl has the looks of the cutest pony, but is definitely horse size and suitable for everybody alike.

She is well behaved and fun to ride. She does not mind big machines being moved around her while she is ridden and pays only attention to her rider. In addition to being sensational all around, she is a real partner, sweet and cuddly and thrives for attention. She loads, likes her showers and stands quiet to get tacked up. She is in daily training and learning really fast, seeing how she understands and communicates, she will be at the highest levels in a short time.

This is a special horse for a special person - searching the one in a million.

Price includes import and quarantine to NY, check out her video clip!!!

Please find all info and other hand selected top quality horses for sale at www.HWfarm.com