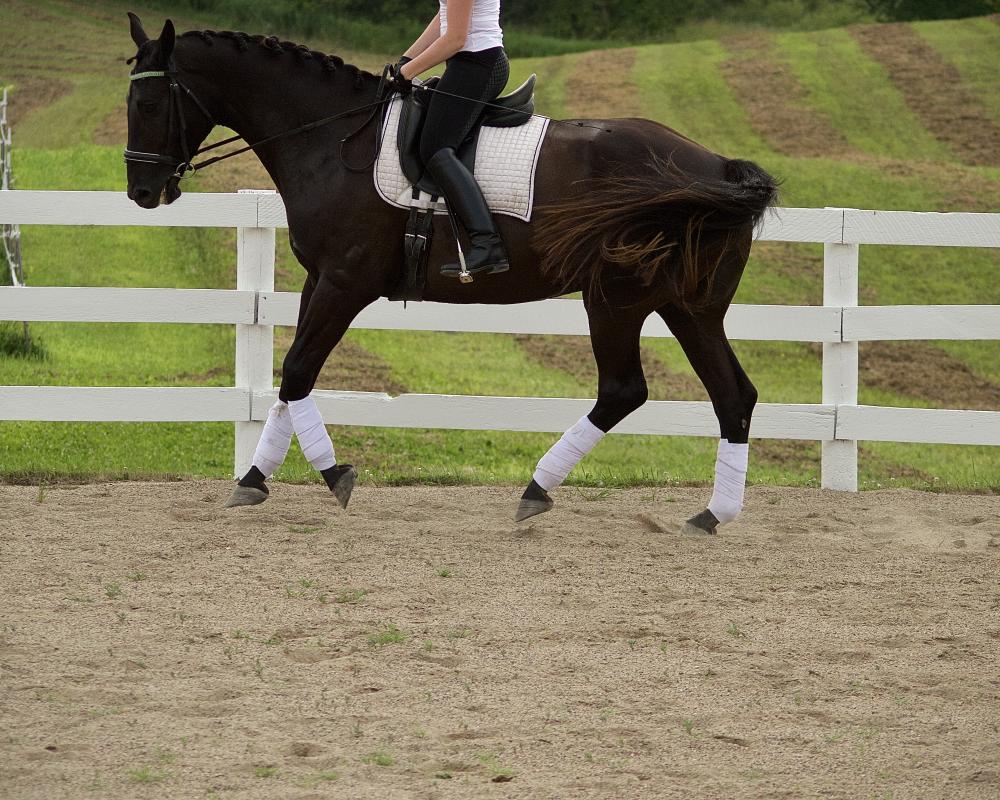 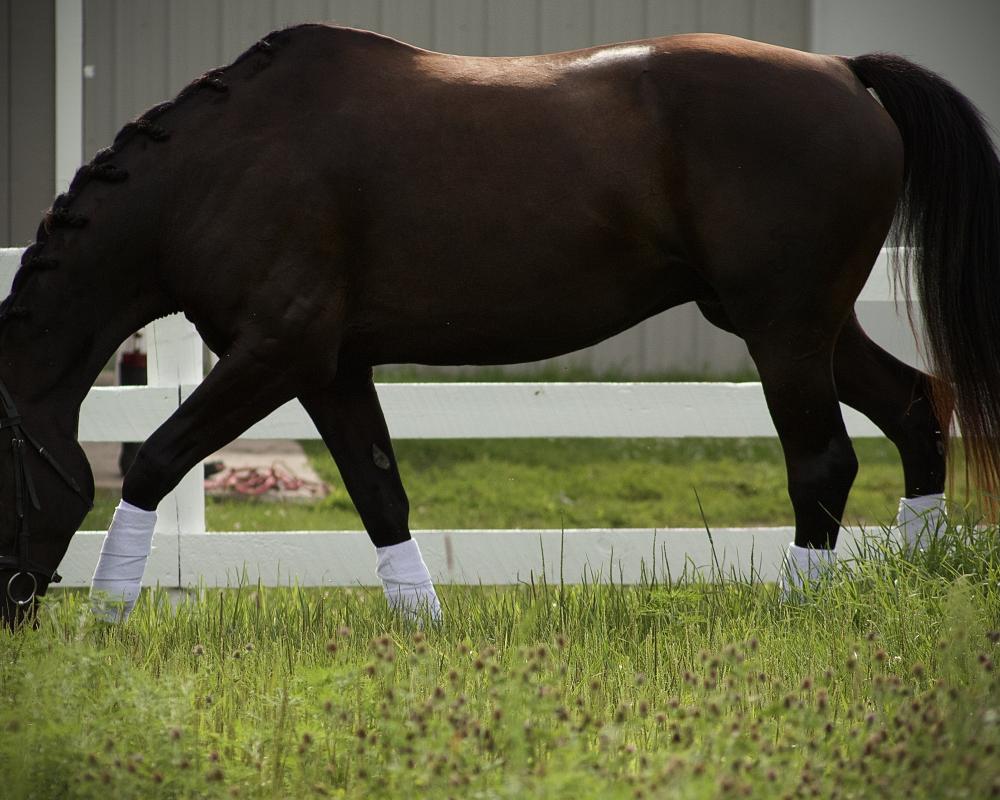 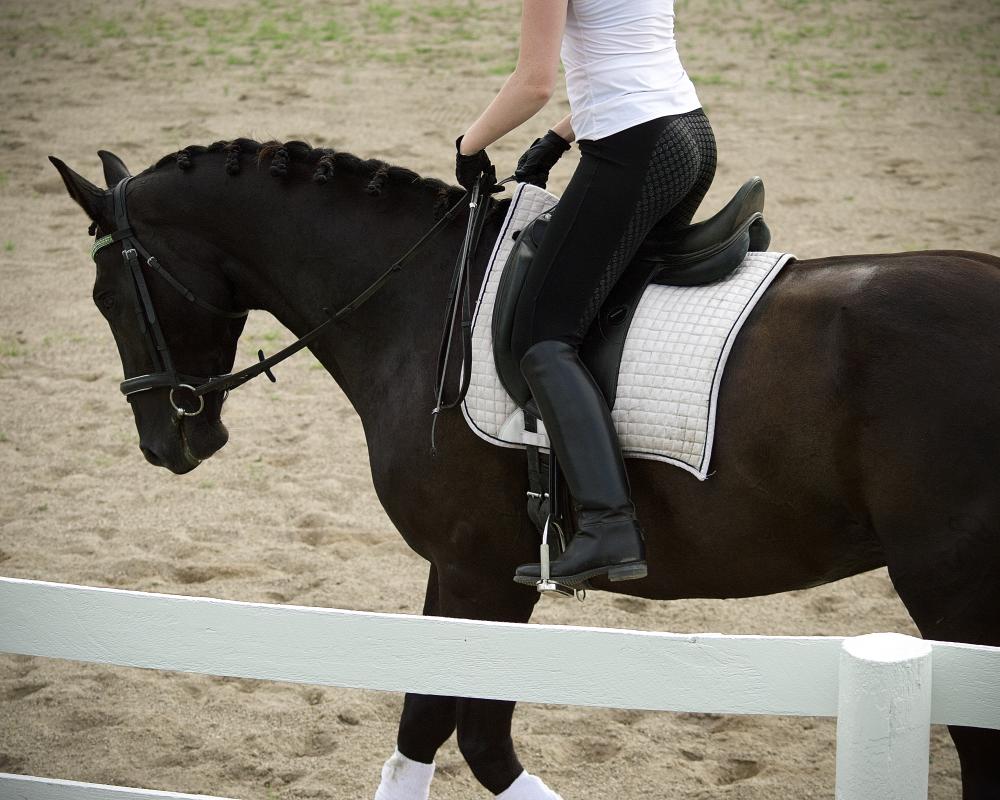 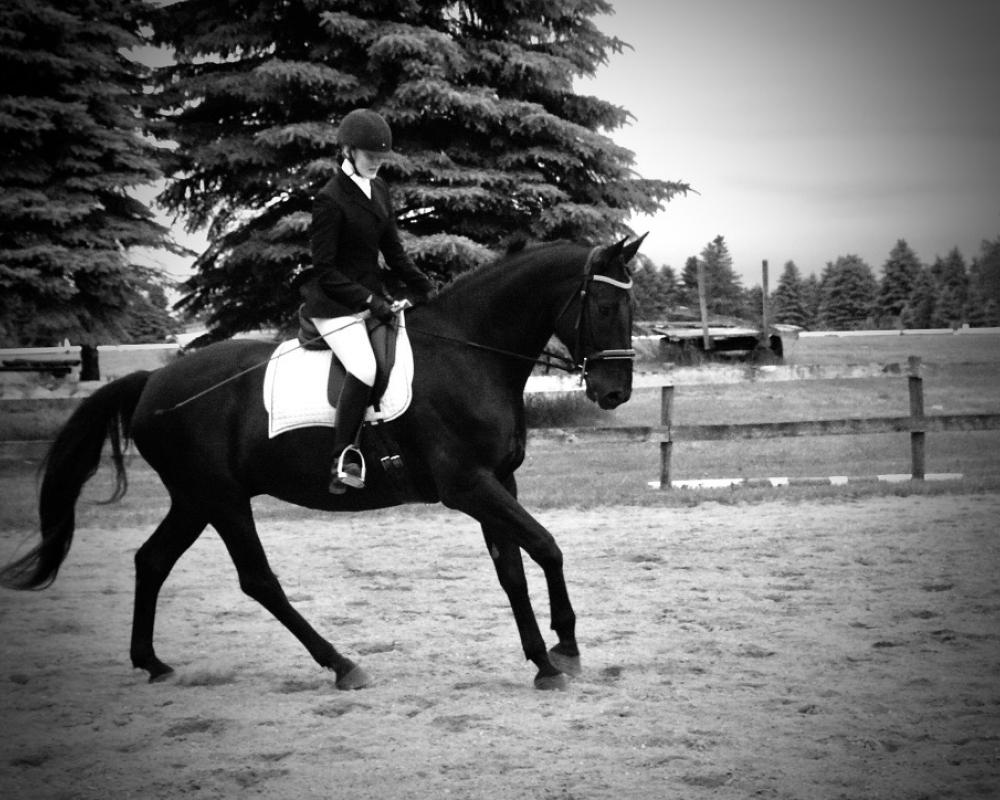 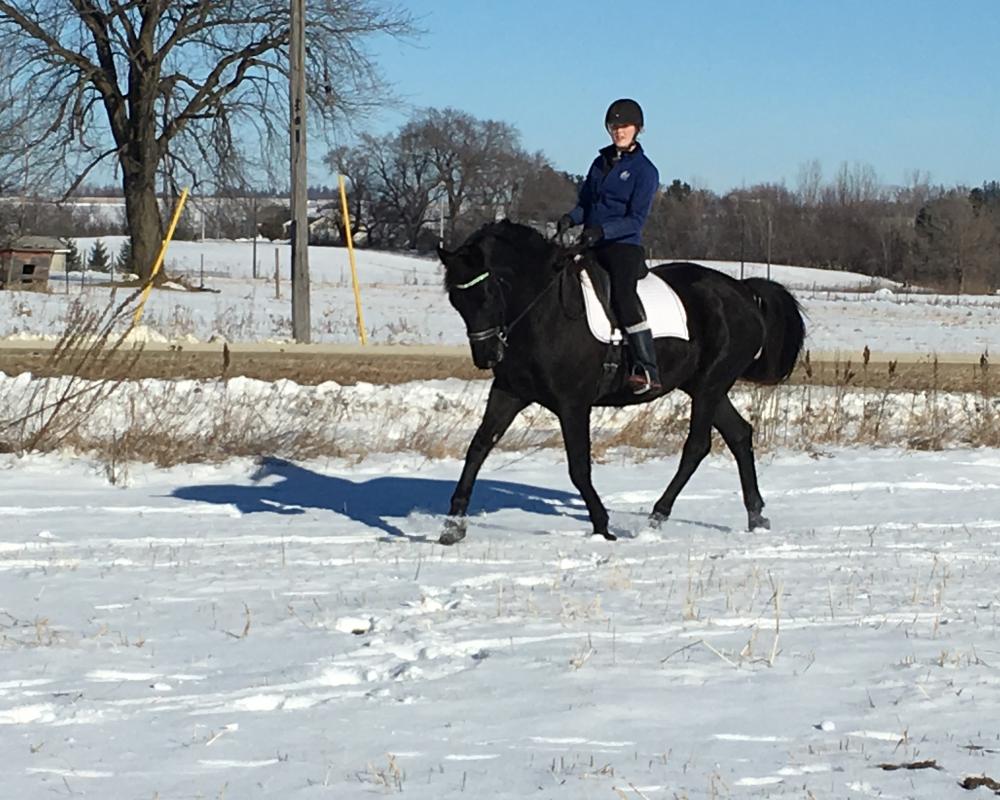 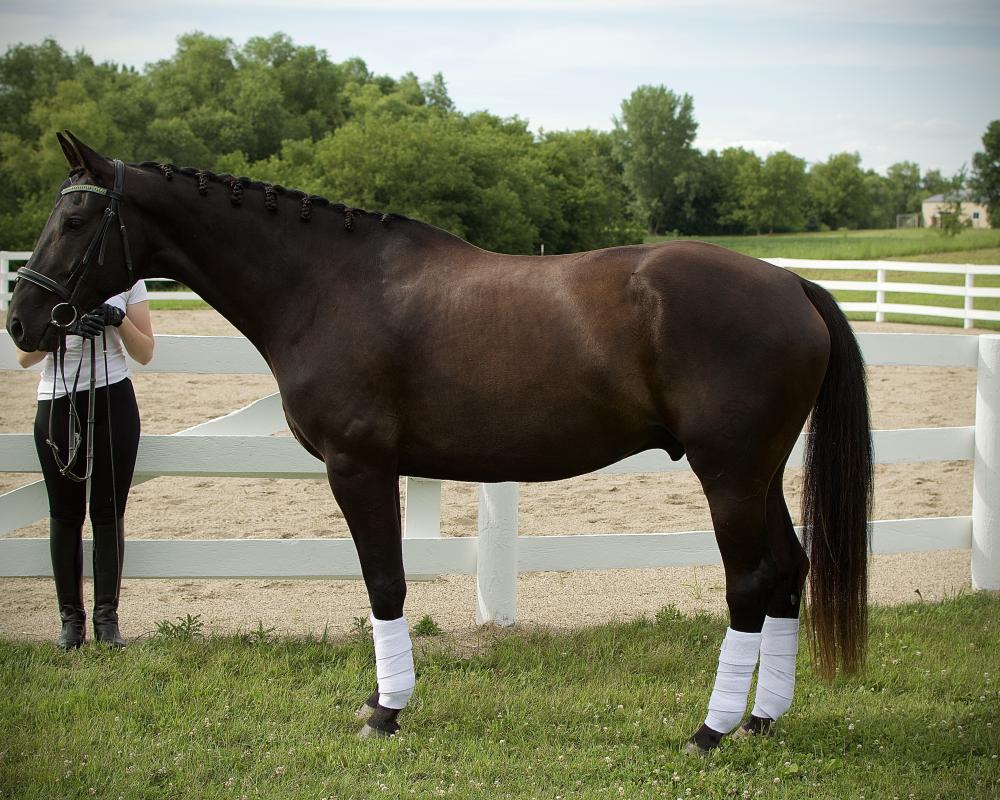 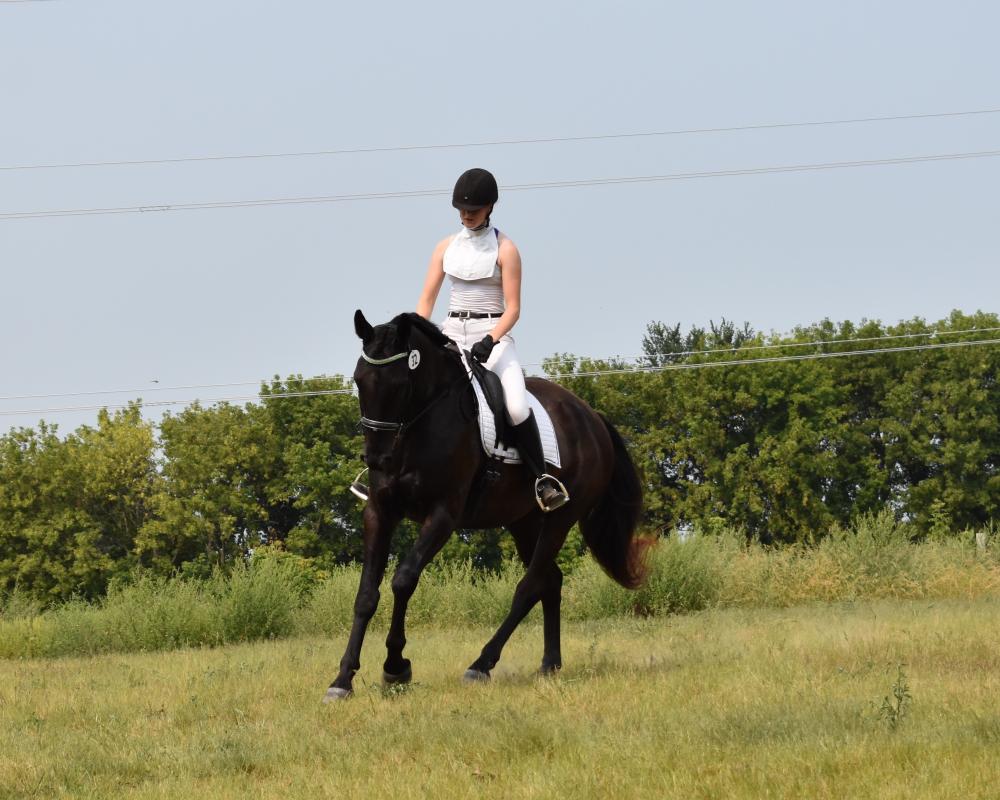 This big guy will get you noticed! His big, cadenced movement catches everyone's eye! Bogart has excellent confirmation, big hock, hip, and shoulder. He has been trail ridden with a group and alone, winter and summer. He goes through water, is familiar with riding on roads near cars and farm equipment, and even rides bareback and double! He's been used for ponying young horses.
Bogart has experience with novice riders but has incredible power and talent to give when a more advanced rider asks for it. He stands quietly for vetting and farrier. He's never been shod and has solid feet and legs and never been unsound.

Bogart's done some jumping and is an excellent cross country prospect. He knows his lateral work and extensions and has incredible power and stamina. He is developing counter canter, walk canter transitions, and some half pass. He is extremely sensitive to working off the seat and leg. He is the perfect mount for an adult amateur who wants to work up the levels. He has a perfect temperament for shows and is content to stand in his stall without a buddy. He often performs his best at shows. He has been shown at several schooling shows and consistently scores in the high 60's and low 70's.

Bogart is an easy keeper and always the first one to the gate. He learns incredibly quickly and retains what he has learned no matter how long it’s been since it was last taught

Bogart is lifetime USEF recorded. Same owner since birth. He is currently in full time training in Prior Lake, MN. Come enjoy a ride!

"How did you get Sweden to let that horse go?"
-Ulf Wadeborn, international Grand Prix competitor, 'R' judge, formerly of the Stromsholm Riding Academy in Sweden

Bayron 885 is a lovely combination of temperament, talent, and lineage. He is an impressive athlete himself, trained through Grand Prix. He began his FEI career as a seven-year-old at Prix St. George in Sweden. Bayron’s light, elastic movement, natural engagement, and high rideability make him a joy to ride and train. Bayron is a lovely refining sire, but is also proven to cross very well with light type mares. He consistently passes along his movement, rideability, and lovely head/neck connection. For those reasons, he is also an appropriate cross for mares that have a bit of "temperament."
Proven Grand Prix Ability
Bayron performs all of the Grand Prix movements with lightness and ease. Bayron was trained and competed by Susanne Gielen, Head Trainer at Flyinge State Stud. (pictured at right)

Rideability
Bayron is known not only for his high rideability (on which he scored a perfect "10" at his stallion inspection), but also his offspring’s high rideability. Bayron is a forward thinking, confident horse who tries very hard to please his rider.

Movement
Bayron scored another perfect "10" on his trot which has exceptional cadence, swing, and impulsion. Bayron’s movement is light and elegant with a lot of freedom in the shoulders. Most importantly, his movement is very easy to collect and extend. He is very tractable and easily connected. Bayron also excels in the lateral work.

Proven Sire of Grand Prix Ability Dressage
Horses Bayron has sired many successful FEI dressage horses. He has 250 listed offspring through 2008 in Europe.

Art Deco has not only proved his ability in the show ring, he is also proving to be a top sporthorse sire. He has earned three prestigious star awards and is an Elite stallion. Art Deco has competed successfully in Grand Prix Dressage, Hunters, Eventing and Jumpers. He is truly one of the foremost sporthorse stallions in the country today. He is one of the VERY few pinto Warmblood stallions in the WORLD to compete at the above mentioned levels. He was the first pinto stallion in the world approved for breeding by the Oldenburg Verband via ISR/OLD NA in 1993, opening the door for all future colored horses and their offspring (including Sambers) to be registered/approved in to German registries such as Oldenburg. Breeders would be hard pressed to find another stallion with such outstanding credentials.

Bogart had a distal intermediate ridge fragment (OCD) removed as a yearling. During this procedure, his distal check ligament on the left front leg was transected. Both procedures were completed at the University of Minnesota and all x-rays and records are on file.