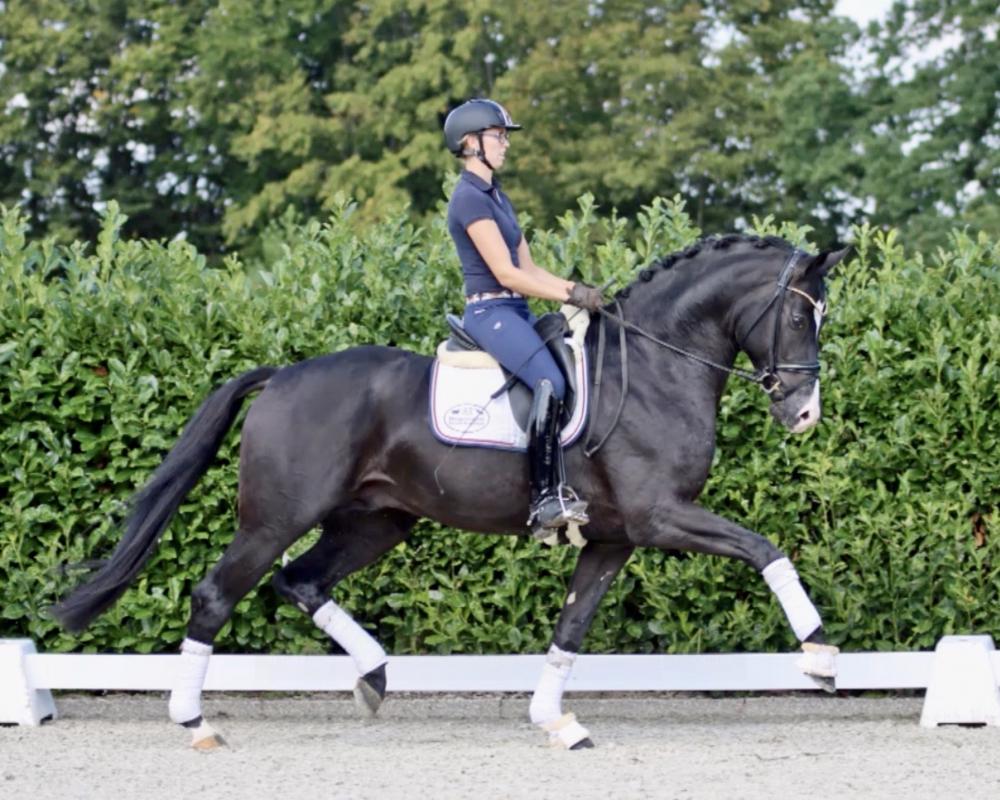 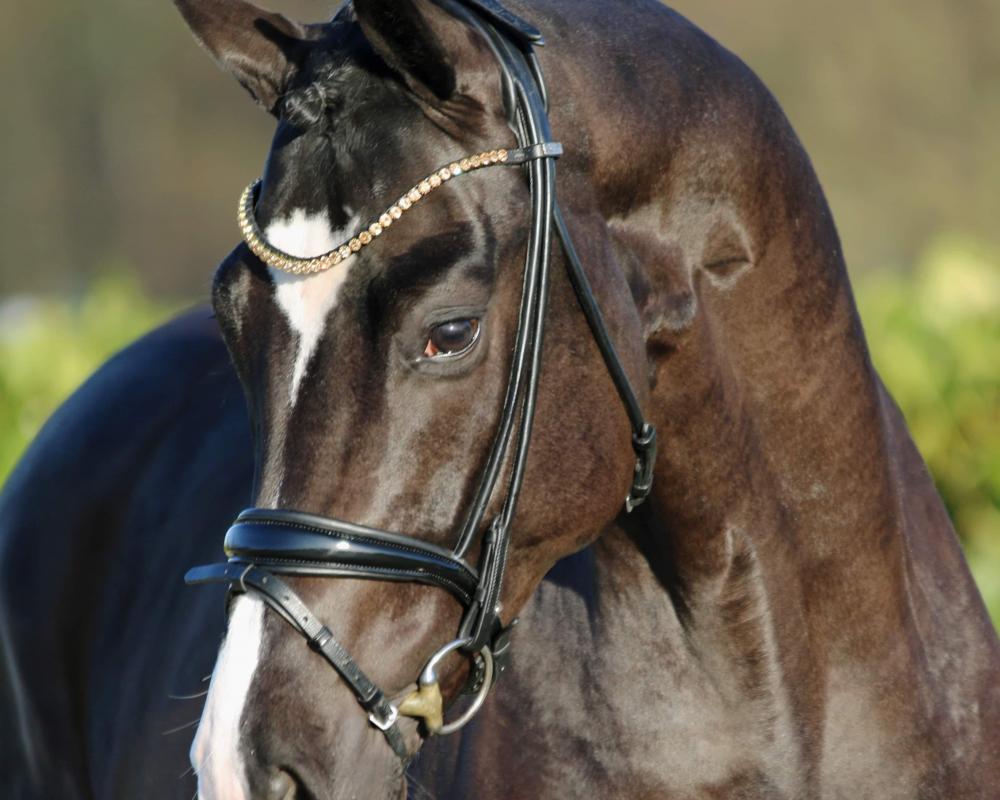 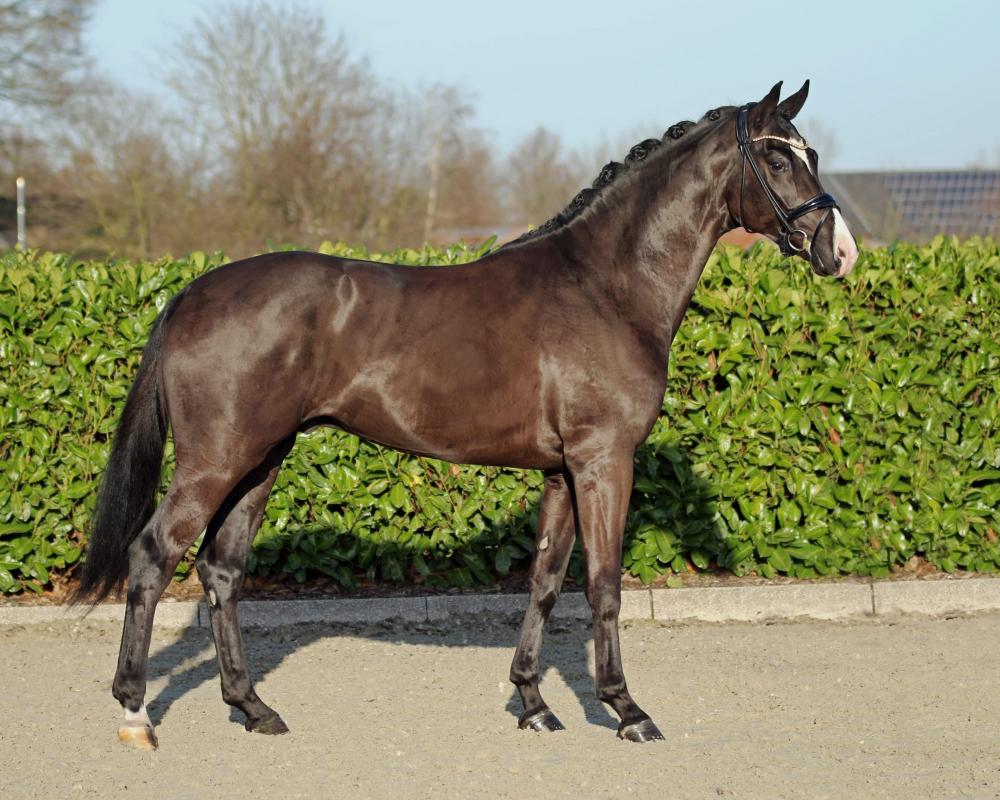 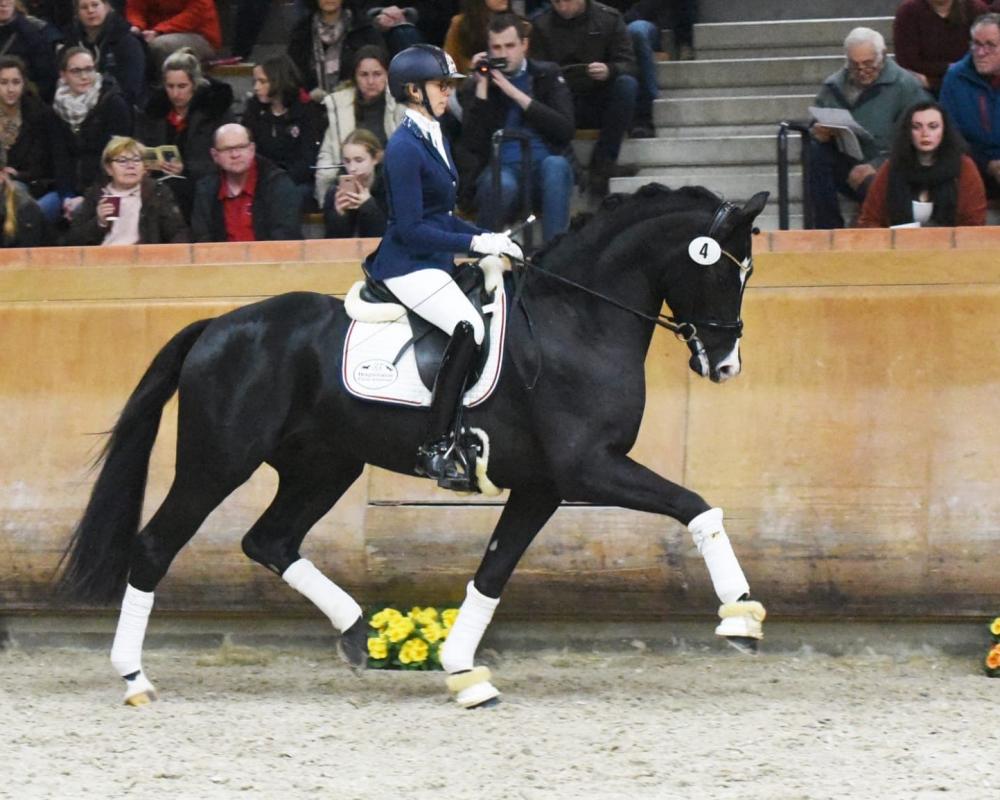 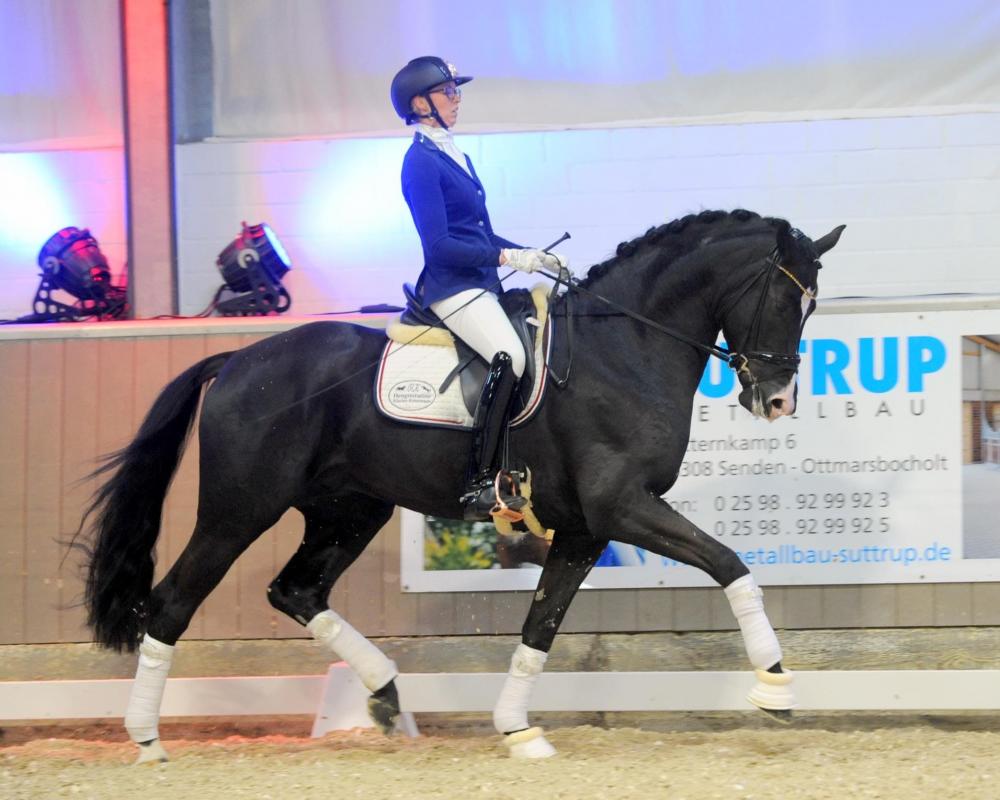 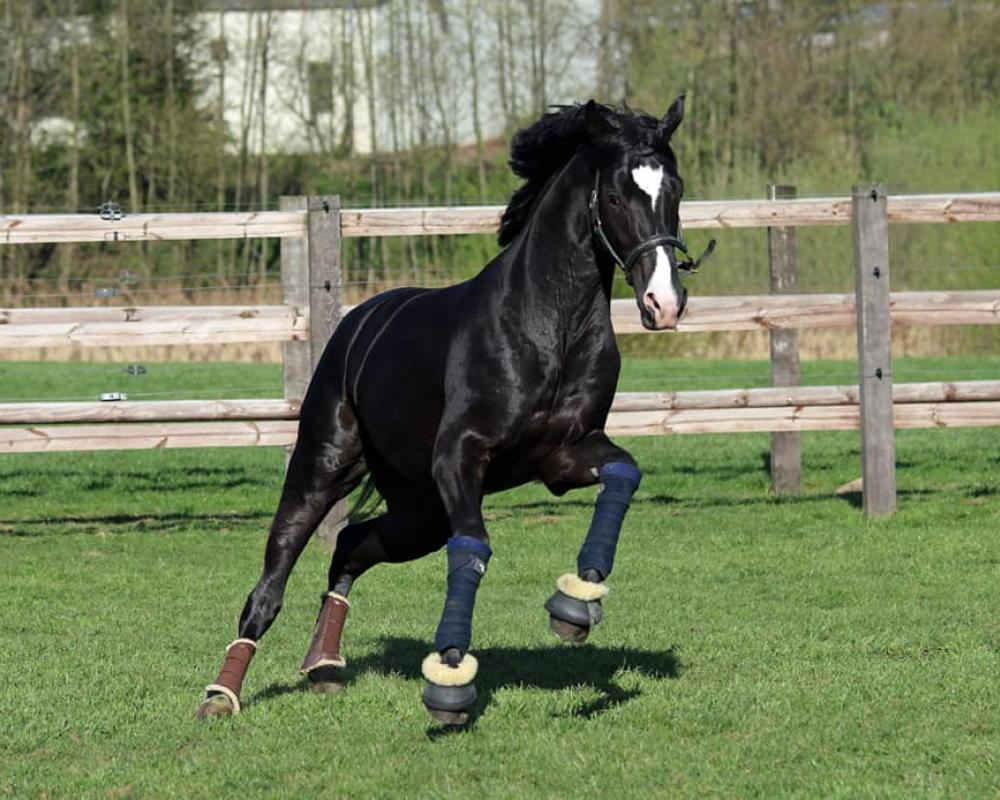 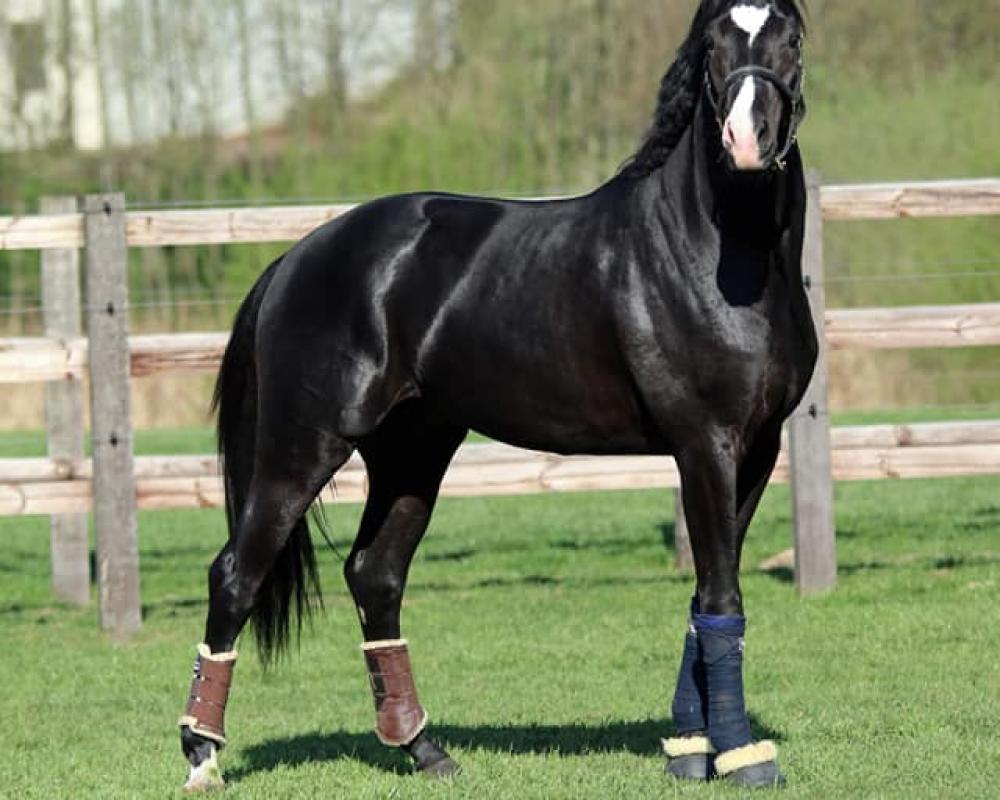 BonFire HW is by the remarkable stallion Bon Coeur, an impressive moving premium stallion at the Verden licensing 2014, dressage champion of his 30-day test, Hanoverian Champion 2016 and two times Vice-Bundeschampion in Warendorf!

With his heart in the right place, this extremely talented black horse can easily meet, perhaps even surpass, the expectations placed under saddle. This handsome black stallion is an exceptionally powerful and active mover. He has almost unlimited elasticity and shows already good carrying power in his hindlegs. His natural uphill movement and his unique work ethic coupled with the fascinating mechanics of movement in all its three gaits make him the epitome of the modern sport horse.

All of his natural qualities, coupled with the best rideability under saddle leaves nothing to be desired. His genetics are obviously inherited through strong dressage genes: his father Benetton Dream was Bundeschampion of the three-year stallions 2007, qualified at the ages of 5 & 6 for the Bundeschampionat. Now Benetton Dream has victories in several Grand Prix and moved in 2013 as Olympic hope to Tinne Vilhelmson Silvfén of Sweden, where he currently has a breeding value of 153 points. Also in this pedigree sire Sandro Hit performance impresses his own performance (Federal champion and champion of the 6 year old dressage horses), as well as his superior sires - (numerous Federal champions dressage Champion, several breed winner, offspring and World Cup successes in Grand Prix win).

In the third generation, we find well-tried Hanoverian performance blood from Carismo (test winner at the time) v. Calypso II, which had several times internationally winning offspring in both divisions of the tournament sport. Especially in combination with Sandro Hit, Calypso II has repeatedly delivered highly successful dressage horses. His Stallion Performance test at Schliekau was a tremendous success! He was the winner (in a super field of your stallions) with the following notes:

His grand-sire Fürst Nymphenburg, who stands at the Celle State Stud in Lower Saxony, was victorious in sport up to Inter II. He produced seven licensed stallions.The typy liver chestnut stallion has not only an expressive, correct conformation, but also well-shaped lines he knows how to use in movement.

He displays ground-covering, always uphill going canter, and he combines his trot, powerful from behind, with the swinging back and lots of freedom of the shoulders. His sire Florencio was World Champion of Young Dressage Horses in 2004 and 2005: canter 10, trot 9.7, suppleness 9.6, overall impression 9.9 “like from a different world” – overall score 9.8 – new championship record! Florencio was represented with the biggest contingent of five sons at the Oldenburg Stallion Licensing in 2008: Dam’s sire De Niro is the current Hanoverian Stallion of the Year.

„Fürst Nymphenburg – a prince with perfect character and dreamlike movements.“

As the celebrated reserve champion of the licensing in Verden in 2007 he became the dressage and overall winner of his stallion performance test in Adelheidsdorf one year later.

He was carefully brought up to the difficult class of dressage by his rider Tessa Frank. This perfect couple can be credited with many victories, placements and titles. In 2004 they brilliantly won the qualifiers for the Nürnberger Burg Pokal.

In addition to his impressive performance you can also find many successful descendants of Fürst Nymphenburg: licensed sons, state premium mares and successful sport horses can be found as well as many auction horses.

Fürst Nymphenburg – a stallion to die for!

The great-great grandsire of Fürst Nymphenburg, Furioso, arrived at Station Vorwerk in Cappeln in 1968 and was an immediate success. For years his offspring dominated the German competition and prize money statistics. Interestingly, the sire line of Furioso II delivers both dressage and jumping horses – especially interesting since the common belief is that French horses are no good for dressage. Furioso’s best known jumping stallions are his sons, For Pleasure and Voltaire, in dressage there is his son, Purioso and his grand-son, Florestan I.

Currently one of the more striking heirs of the Furioso II line is the Hanoverian stallion Fürst Nymphenburg, bred from a Thoroughbred line and a son of the double World Champion and elite sire Florencio I. There is depth in the pedigree – De Niro, currently the most prominent dressage sire, can be found on the dam line, and in third generation there is Argentinus, another who delivered both dressage and jumping horses. The dam line leads to one of the main branches of the Thoroughbred family 16. This family produced important stallions such as Aberglaube xx (Oldenburg), Amerigo Vespucci xx (Celle), Atatürk xx (Neustadt-Dosse) and Aufwind xx (Rhineland-Pfalz).

Fürst Nymphenburg was reserve champion at the Hanoverian licensing in Verden in 2007.

In the 2008 competition season he won several riding horse classes with scores of up to 8.7 and qualified for the Bundeschampionate. In the autumn of 2007 he won his stallion performance test in Adelheidsdorf, with the highest dressage index of 147.23 points.

According to the Hanoverian Stallion Book 2015, he has won four dressage classes at S level with his trainer Tessa Frank, for winnings of €4,356. As of the 2015 book, he had produced 97 competition horses, all of them dressage horses, for earnings of €10,532.

Fürst Nymphenburg commenced stud duties at Hadeln/Oberndorf in 2008 and was immediately one of the most popular stallions in Hanover. He produced successful foal crops, including numerous foal show and championship winners as well as the top-priced lots at auction. Since 2013 Fürst Nymphenburg I has been standing at Aller-Weser in Verden.

Five of Fürst Nymphenburg’s sons have been licensed, including a black stallion from his first crop (2009), Fool’s Paradise (Wolkentanz I-Thronfolger), who has already won riding and young dressage horse competitions, and Fürst Wallerstein (Walt Disney I/Lemon xx), licensed in 2013 and competing successfully under the banner of the State Stud in Celle. Fürst Nymphenburg’s other sons include First Row (Hitchcock/Matcho AA), Fürst Weedern (Rotspon/Matcho AA) and Fürstenstern (Sterntänzer/Donnerschlag), who was sold to the USA following the 2012 southern German saddle licensing.

So far 122 daughters of Fürst Nymphenburg have been registered, of which 60, received the state premium tag and several of these were victorious at mare shows – a high success rate.

Fürst Nymphenburg has an 2014 FN dressage breeding value of 160 points and placed in the top one percent of German dressage stallions. He is third on the 2015 Hanoverian list for Riding horse type with a score of 156. His Hanoverian dressage value is 145, with scores of 134 for trot, 153 for canter, 139 for walk and 135 for rideability. He has obviously missed out on the Furioso jumping talents, with an FN jumping breeding value of 84, and a Hanoverian one of 83.

It is the combination of brilliant movements, highest rideability and best character which make Fürst Nymphenburg a very valuable breeder. He is stationed at Landgestüt Celle and was called the 1st Reserve Champion of the dressage slot at Verden in 2007 and confirmed this assessment with serial wins in young riding horse classes with Wolfhard Witte.

As Hanoverian Vice riding Champion he was part of the Bundeschampionat 2008 where he received great marks (8.5 for exterior, 8.0 for each canter, training, and presentation) and became 9th.

Subsequently he superiorly won the stallion performance test in Adelheidsdorf where he decided the dressage index with 147.23 points.

Carefully developed the stallion always showed high motivation and proved his quality as a dressage horse in Germany whilst being in breeding.

Today he can look back on many placings and victories in class S (GER) and was qualified for the finals of the Nürnberger Burgpokal in 2014. In 2015 he achieved first successes in short-grand-prix.

His sire Florencio I was Westphalian Champion and Vice Champion at the Bundeschampionat of the four-year-old stallions in 2003. In 2004 he secured the Dutch Pavo-Cup with Hans-Peter Minderhoud/NED and won the World Cup of Young Horses of the five-year-olds in Verden with a record-breaking result: A total of 9.8 where the canter was marked with a 10. In 2005 he defended his title in the six-year-old class. Florencio I became the dressage main premium winner in Oldenburg in 2004. Meanwhile, placings in advanced dressage levels are recorded. More than 30 sons received the breeding permission including the 2nd Reserve Champion Fackeltanz OLD.

The proven sires Hochadel and Carbid appear in the third and fourth generations of BonFire HW's pedigree.

Bonfire HW is a very modern, elegant stallion, he showed his very elastic, blessed with lots of air time movement and suspension, at his licensing.
Already at the lunge line, he was stunning, with a free shoulder and a super active hind leg, the auditors honored his presentation with a lot of applause and the judges with his approval.

In the meantime, he is licensed
for Westphalian, Hanoverian and Oldenburg.

He was able to pass his 50 day stallion performance test in 2020,
with an absolutely phenomenal score of 8.36.
Featuring a fantastic NINE for his work ethic, here are the single scores:

BonFire HW is super easy to ride, trustworthy and a lot of fun to be around.
He is truly a black beauty, super well set on stallion neck, the prettiest small, chiseled head with warm, kind eyes.
His stunning looks, guarantee the attention of the audience, is always on him.
This boy tries so hard to get it right, smart, willing and gives his very best, every day out. In addition, he already produced wonderful foals, all are dark or black, he does not produce any chestnuts, genetically tested - dark offspring only from this gentleman.

He would be the perfect horse for a Young Rider, An Adult Amateur,
or a professional, the sky is the limit, this is a definite Grand Prix prospect.

His amazing bloodlines would help the USA to produce some high quality dark foals with hopefully the same high ride ability and looks,
if he’d sell to the USA or if not, anywhere else in the world.
He for sure stamps his foals and improves the mares by a lot.

This boy will go far in the dressage ring and is your ticket to the top.

Buy him now and show him yourself in the Young Horse Championships or take him to the BundesChampionships.

Please find all info and other horses at www.HWfarm.com