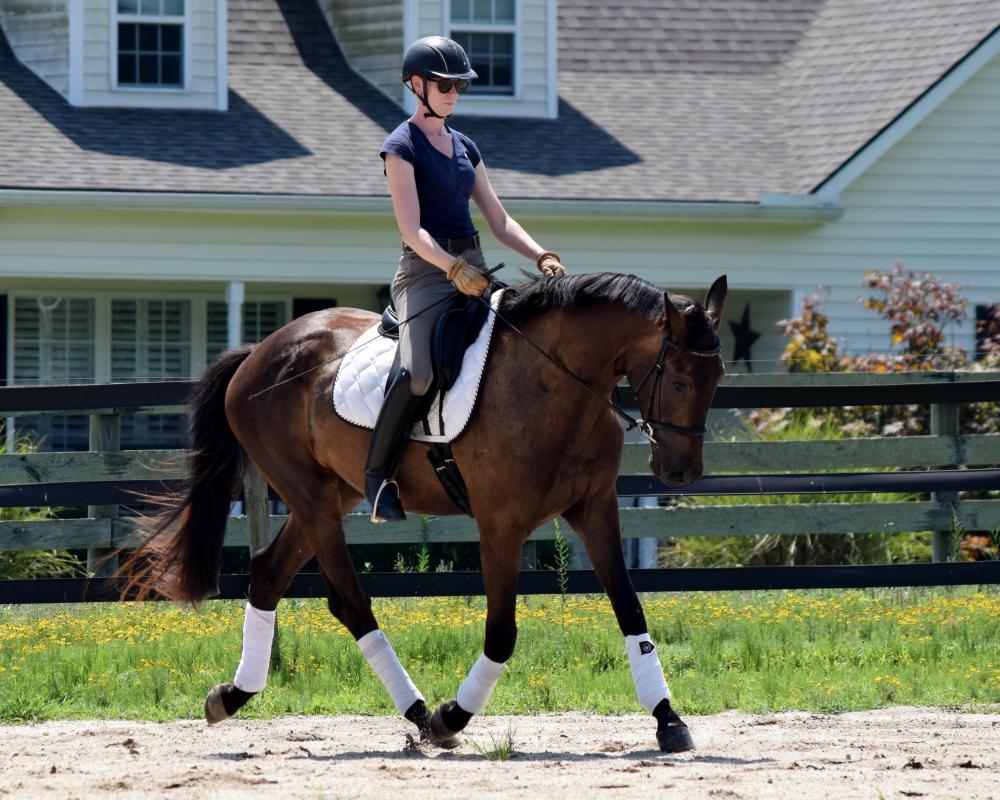 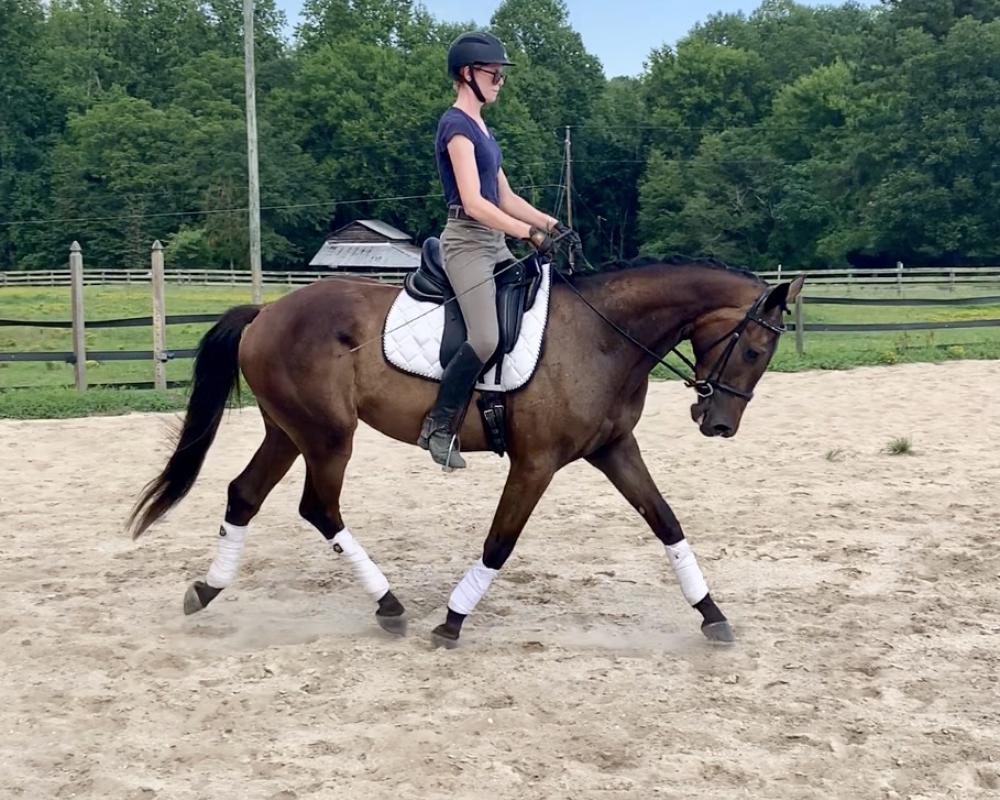 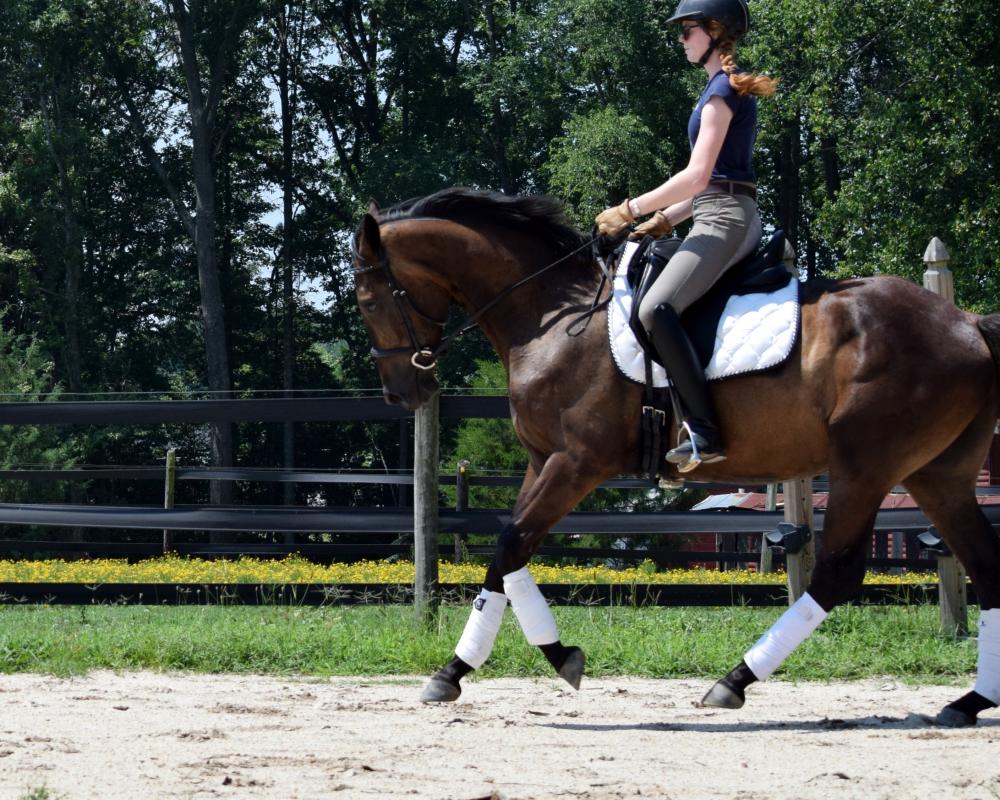 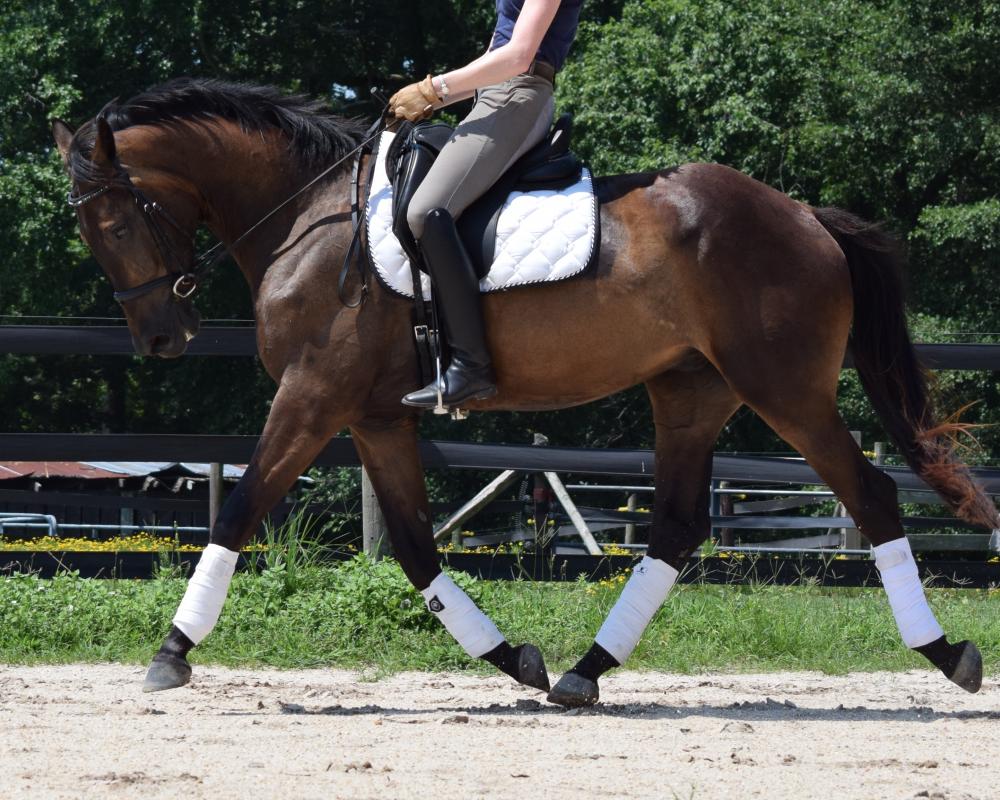 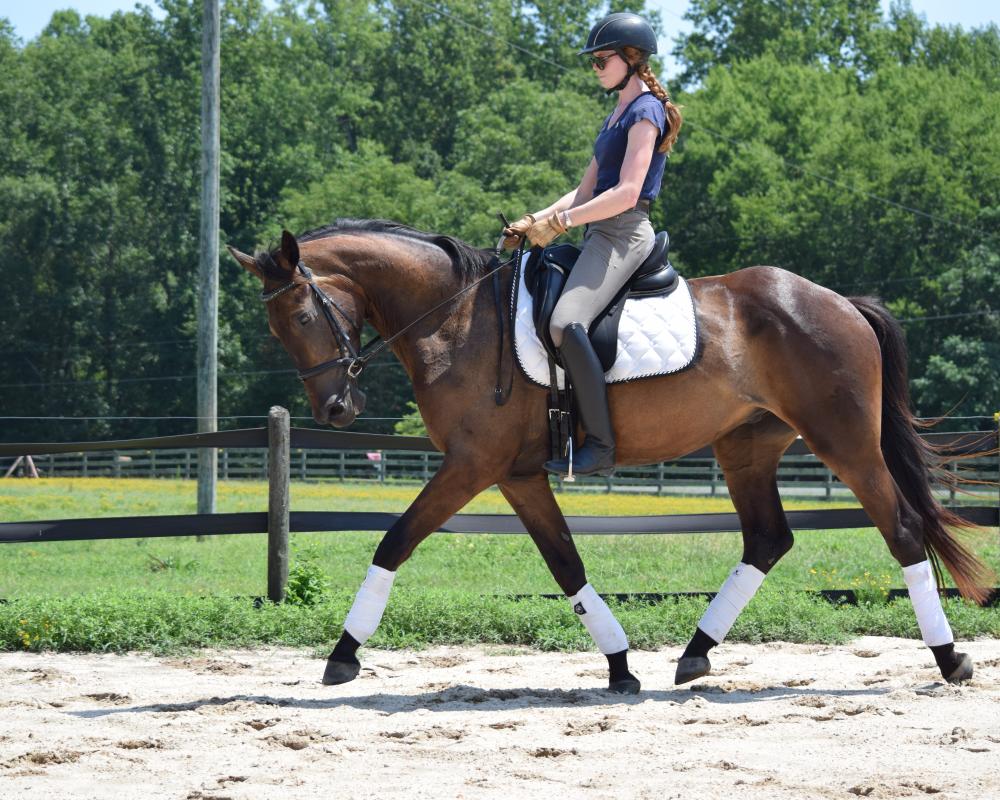 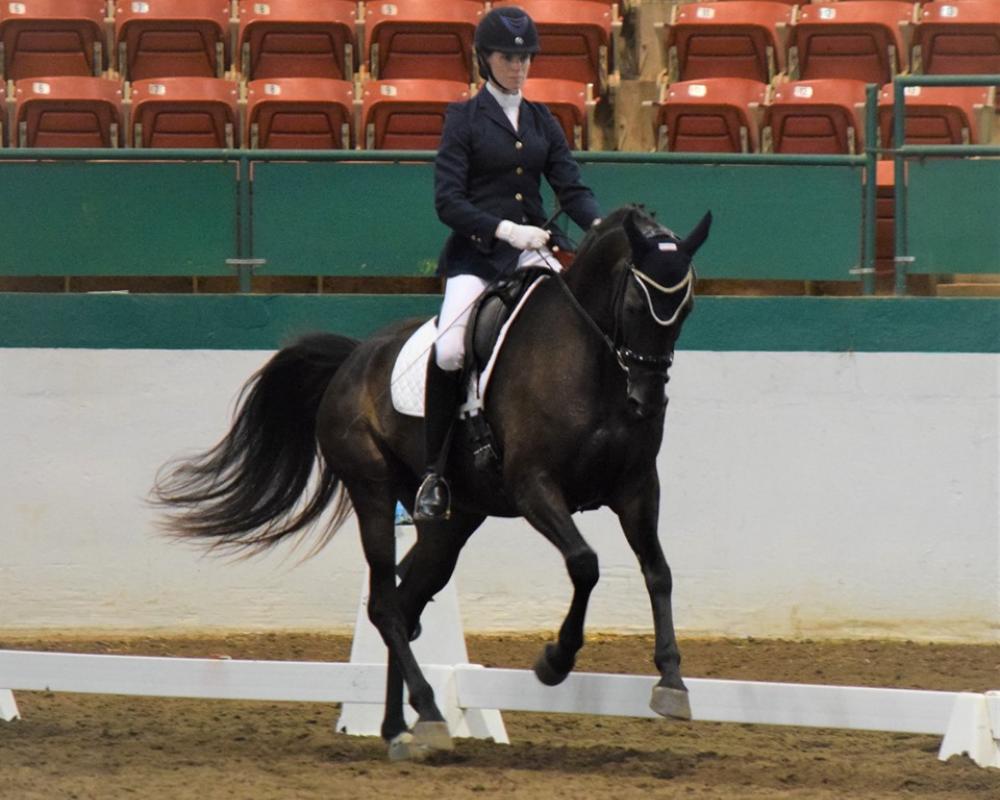 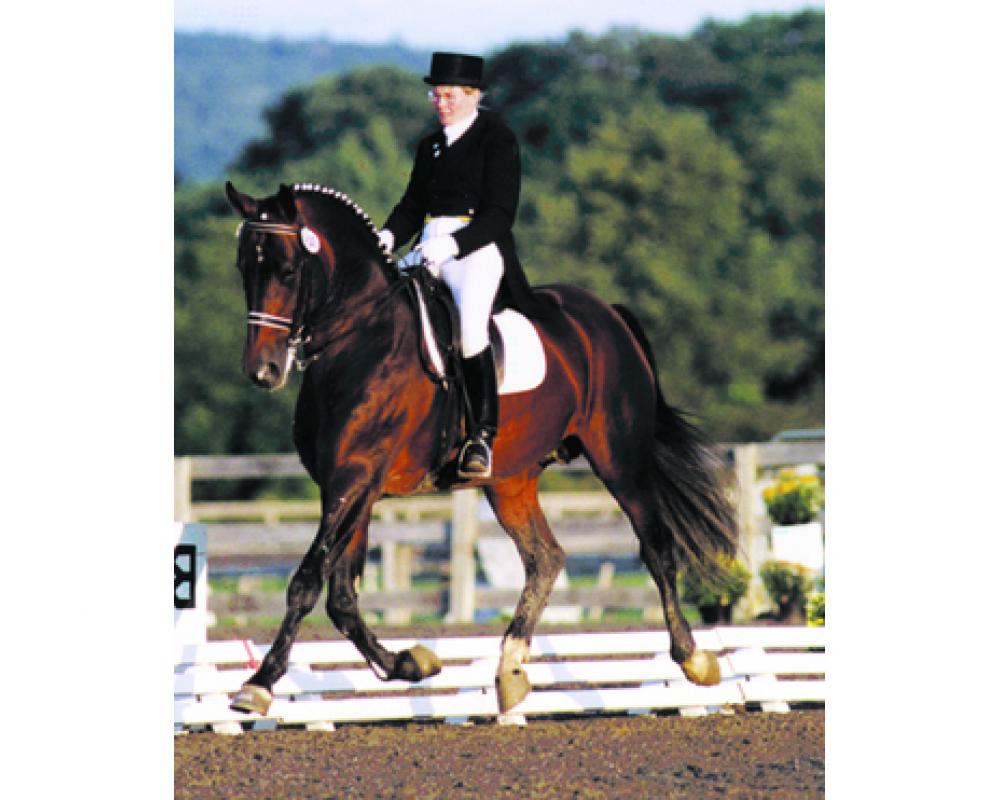 Prospect by the Grand Prix stallion, Boleem! This 2016 gelding should finish 16.2-16.3h and already sports great bone and correct conformation even though he is not yet "finished". Bravo! was a Gold Premium foal at his keurig earning solid 8's on conformation, interior, and for all 3 gaits! He is very bright, super people oriented, and totally wants to please. Started carefully and correctly under saddle this Spring, he is confirmed W/T/C. He bathes, clips, ships, excellent for the farrier etc. This is a super well educated and well started upper level prospect! Current price is $25,000. Has excellent x rays on file and no health or lameness issues to date!

VHart Equestrian who we have entrusted to start his training, describes him brilliantly below:

"Well guys, it’s finally time for this cutie to go on the market! Bravo is a three year old Warmblood gelding who I started under saddle this Spring. He is a “canters to the gate when he sees you coming” type of enthusiastic and he absolutely can’t wait to have his own person to take him up the levels, but also cookies ?! Part Labrador Retriever, Bravo aims to please and has seemed to enjoy entering the workforce, always putting forth a “pick me!” attitude. Under saddle Bravo has a butter soft mouth, is attentive to the leg, and has elasticity for days. I drool imagining how incredible his movement will be after a few years of growth and strength. With his great bone, and quality movement we see Bravo excelling in the dressage world, but he has also shown aptitude for jumping so we won’t rule that out either! Sensitive and intelligent, Bravo is also a kind horse who I think could pair well with a professional or an amateur. According to the string test, Bravo will mature ~16.2 - 16.3 His pedigree is outstanding, and I have to mention he has an excellent set of radiographs taken right before he came into training."

Pedigree Details:
Sire-"Boleem"- An imported, KWPN stallion who rose to Grand Prix under Michael and Sharon Poulin, qualifying for the USET Dressage list 2x and receiving multiple awards through GP. Produced many Upper Level dressage horses as well as top jumpers! Retired sound and remained so until his passing at age 26. He is known for passing on his powerful hind end, strong back, stellar leg conformation, and notably famous for his friendly, people pleasing nature.

Dam-"Replikah HF"- Zweibrucker mare, is a gem in herself as she produced 7 consecutive Gold Premium foals. All 3 daughters earning States Premium status as mares as well. VPrSt Sophia Loren(Stedinger) was No#1 mare in 2016, VPrSt Silke of Edenhof (GRP x Smoke Tree Snapdragon) was No#1 foal overall in 2015 and No#1 Westfalen German Riding Pony mare in 2018, and VPrSt Edenhofs Dekadence v dream Along who produced 2 Gold Premium foals herself, and is now beginning her career.. already twice earned High Point Champion and "Born in the USA" awards in first few shows at large East Coast shows!
Damsire-"Regulus"- Regulus represents the best of an extremely successful Holsteiner dressage pedigree. He was sired by Rapport, the highly successful Grand Prix Dressage stallion, and his damsire was Franat who also sired Fraval. His Holsteiner lines also boast the famed Thoroughbred influence of Ladykiller on both sides, and he was successful as a sire of jumping horses as well as dressage mounts. In 1999, he was licensed and approved by the RPSI, the AWS, and the PHR. In 2000 he was Grand Champion, Mature Horse Champion, Champion Holsteiner, Champion AWS , and Stallion Champion of the MSCTDA Dressage and Breed show boasting a score of 82.5% ! Most notably he sired three approved sons; USDF 2005 Horse of the Year Raison do Joie, and 2002 USDF Horse of the Year Roi de Soleil D, and Romulus. He also produced Raison d’Etre who was on the 2004 USAE Young Horse Short List for the FEI World Breeding Championships. Regulus was also the winner of 9 out of the 11 Get of Sire classes he entered in USDF Dressage & Sporthorse Breeding Shows. He sired an amazing 8 Site Champions of inspections and 32 of his 34 offspring were inspected and earned First Premium with scores of 8.0 or higher. This modern sporthorse stallion with outstanding canter and athleticism, was well known for stamping his foals with his superb shoulder and front end, as well as his extraordinary engagement and gaits.