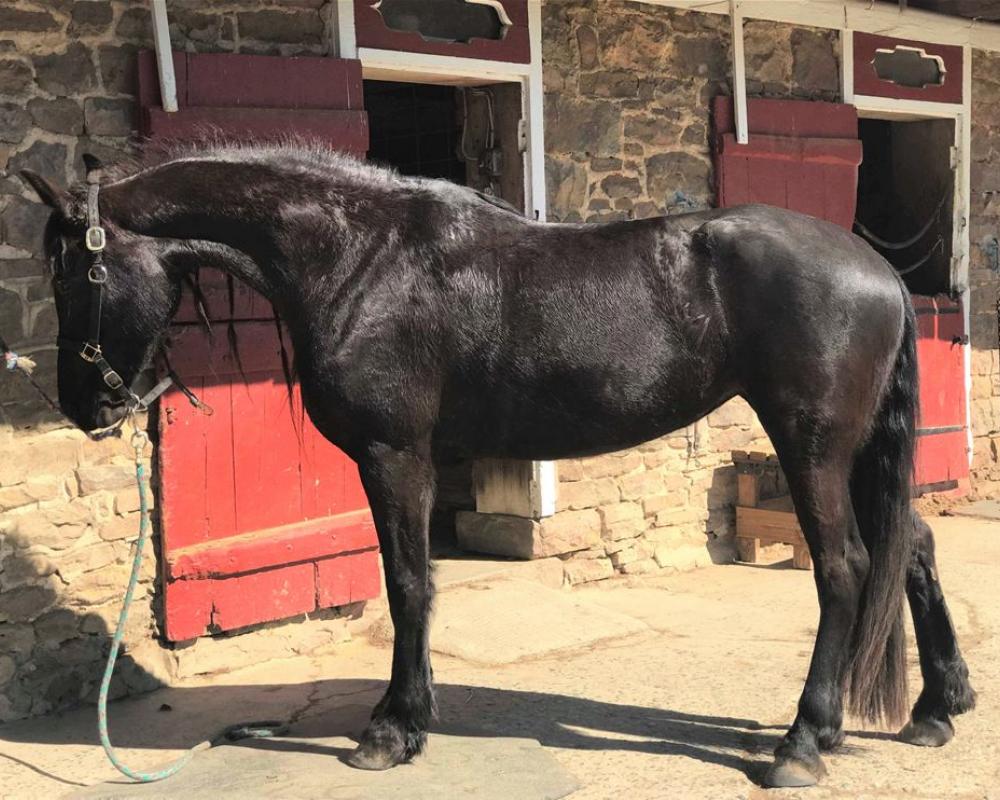 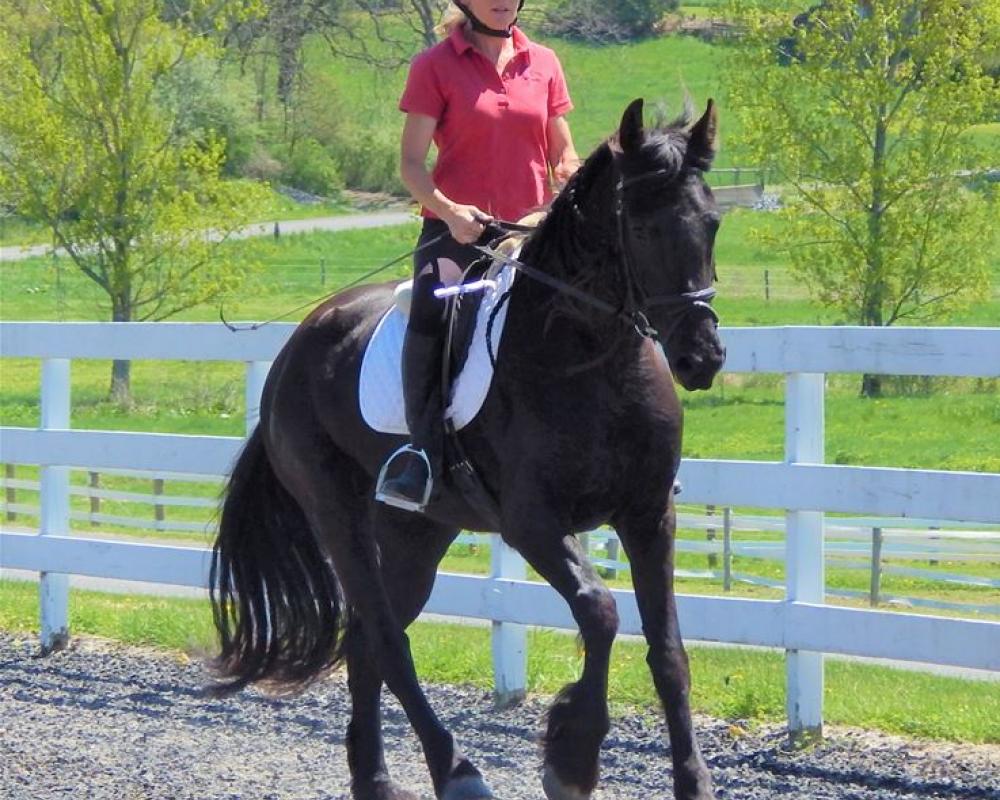 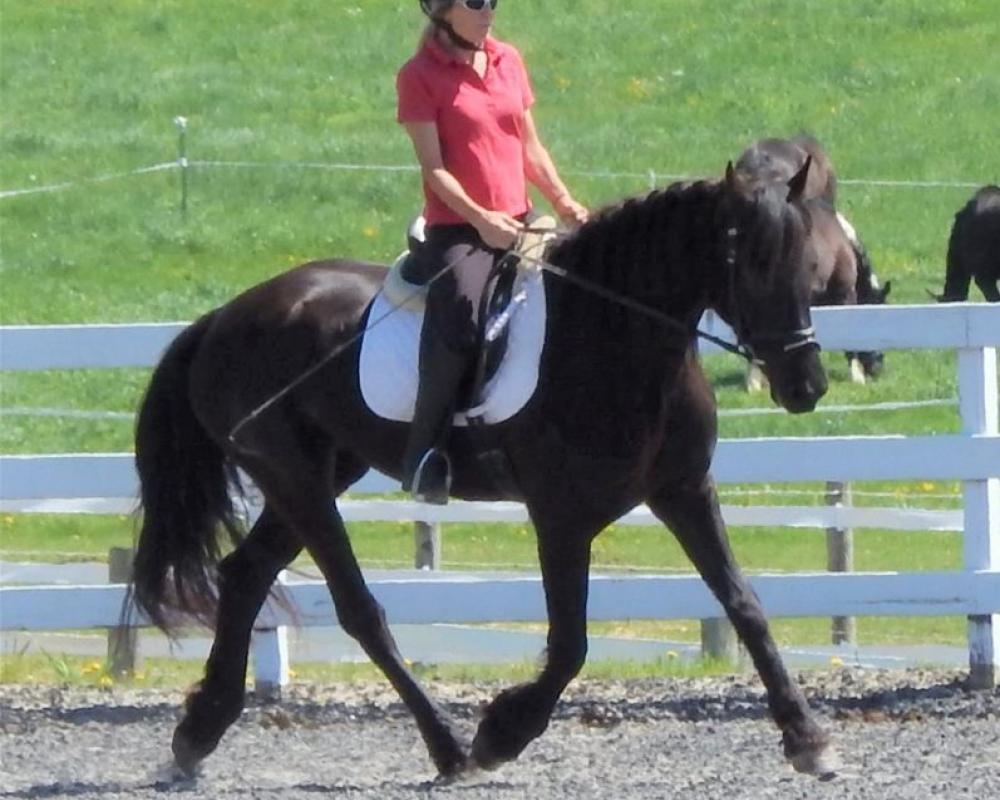 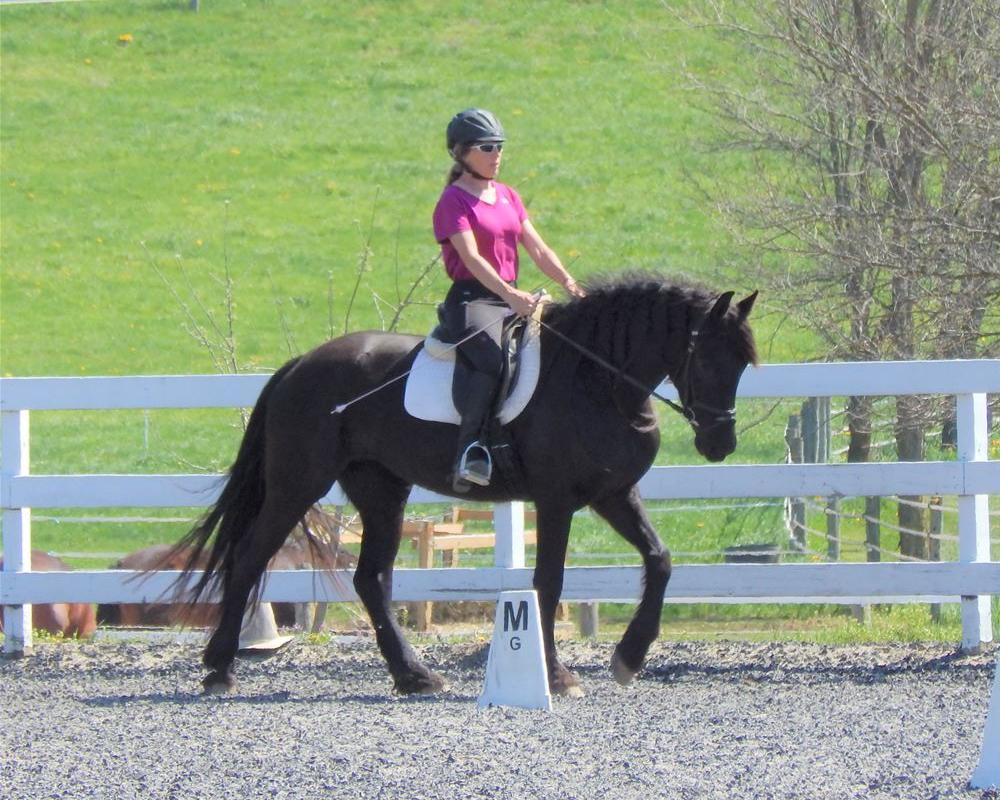 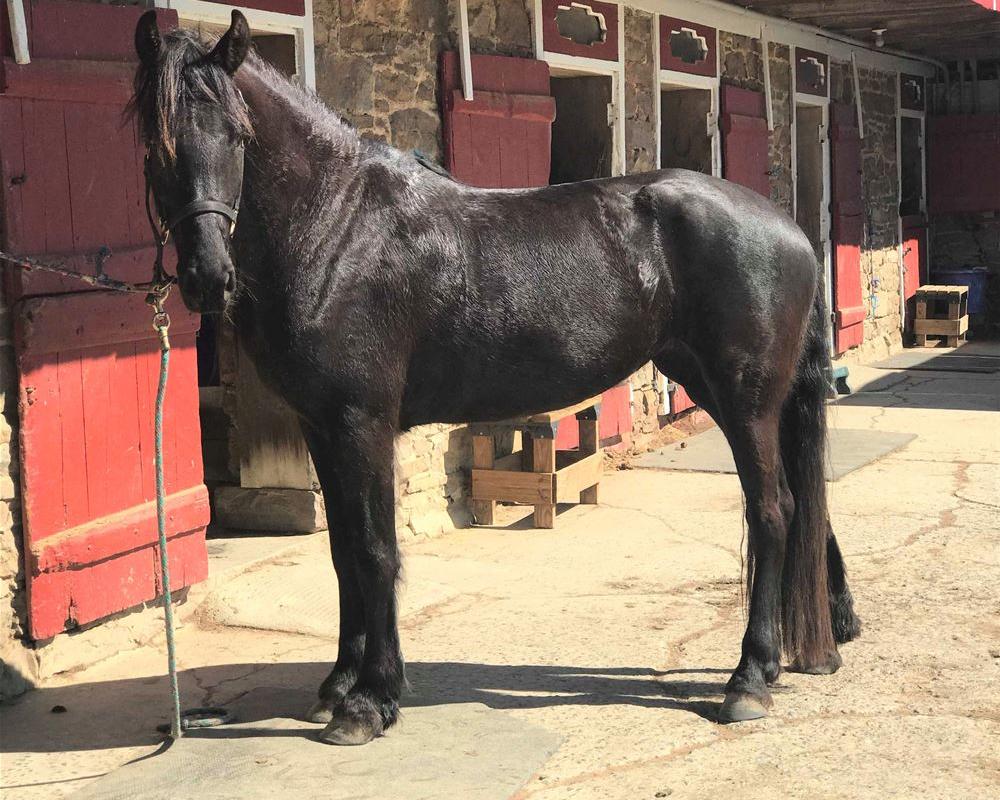 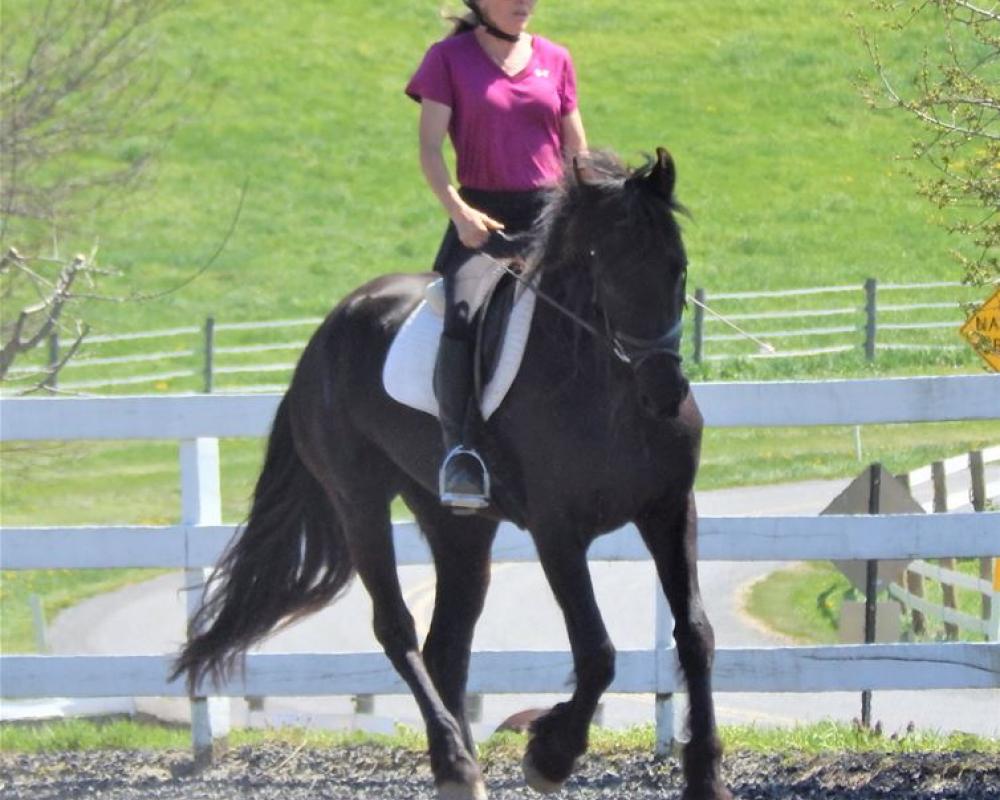 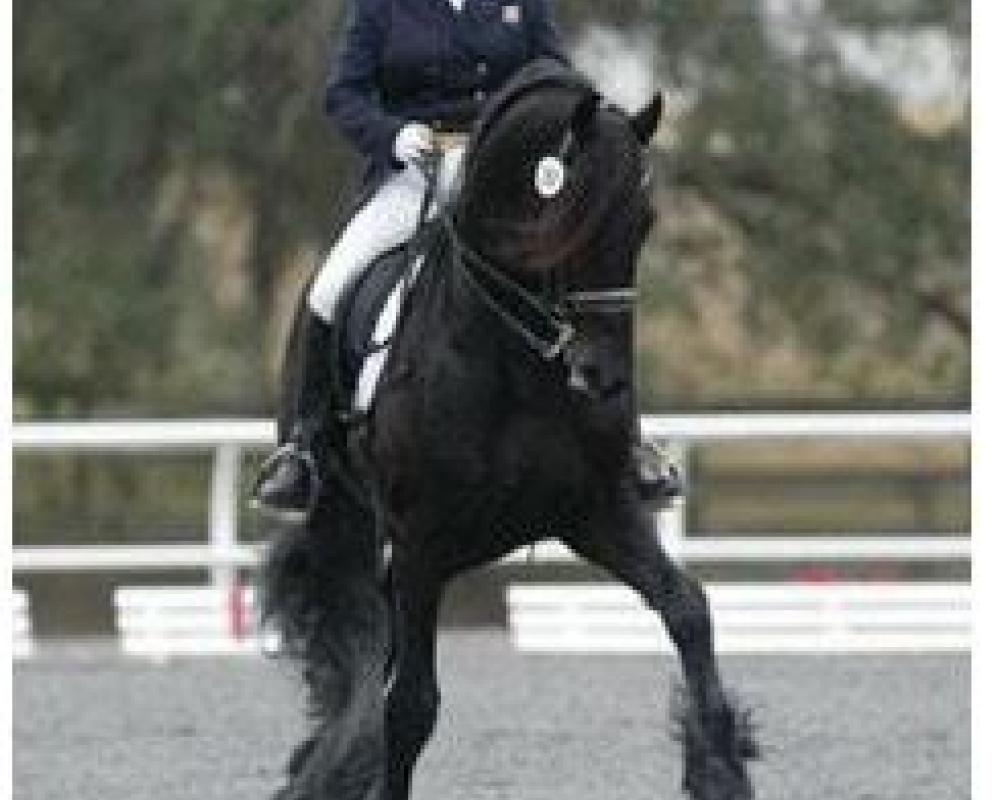 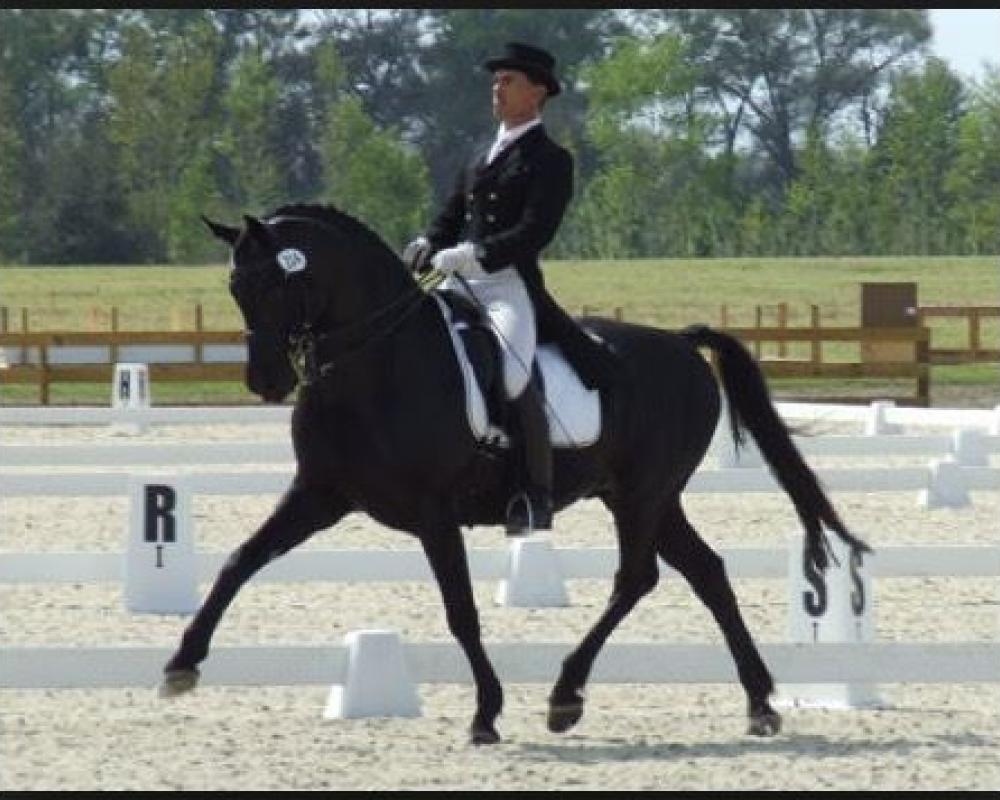 Daiyu SCS is a 2014, solid black, 15.3 1/2hh (and still growing) Friesian Sporthorse mare, registered with The Friesian Sporthorse Association. Her name, "Daiyu" (rhymes with "bayou") is a Chinese girls' name meaning "Black Jade". She's 3/4 Friesian, 1/4 Oldenburg, by GP Friesian stallion Goffert 369 x GP Oldenburg stallion Donatelli II x Pilgrim 336. She was backed as a long 3 year old and has been in consistent training for a few months now under professional young horse trainer, Sandy Kantor. She is forward without being hot, is very sweet, willing, and tries very hard for her rider. She's barefoot with great hard feet, a very good loader/traveler, not at all "mareish", and is very good for the vet and farrier. She has lovely, correct, and refined conformation with a gorgeous head and neck and a long beautiful mane. Daiyu is bred to be a star in the dressage ring, and is truly an experienced amateur's dream!

Daiyu's sire was the sensational Grand Prix, KFPS approved Friesian stallion Goffert 369 (Reitse 272 x Cobus 248). Goffert 369 was big, beautiful and talented and he brought an exciting new dimension to the world of dressage. He competed at Grand Prix with Belinda Nairn-Wertman until his death in 2007. Daiyu was conceived via frozen semen, and is certainly one of the last offspring from this magnificent stallion. During his dressage career Goffert achieved numerous Grand Prix scores over 60%. Highlights included 1st place in the Grand Prix Freestyle at the Kentucky Horse Park with a score of 74.1% and he placed 4th in the Grand Prix Freestyle at Dressage at Devon CDI-W with a score of 69.5%

Daiyu's damsire was the exceptional approved Grand Prix Oldenburg stallion, Dontelli II (Donnerhall x Pik Bube). This cross produced several approved stallions, and many upper level dressage horses. At his 100 day performance test, Donatelli received aceptional scores, including high marks for walk: 9, trot: 9, canter: 9 and for his character he got a 10! He received outstanding scores of up to 72% at Grand Prix.

After having two gorgeous foals for me, Daiyu's dam, Destiny SCS (Donatelli II x Pilgrim 336 x Piter 312), started her dressage career in 2017 as a 7 year old under her new, adult amateur owner. After being only briefly started as 3 year old, and then having 4 years off as a broodmare, Destiny received Year End Champion in Training Level with the Eastern Maine Dressage Association, AND Year End Champion in Training Level with the Northern Maine Dressage Association. This was accomplished in less than one year being back under saddle.

Daiyu's 2016 1/2 brother, DaVinci SCS, by GP Friesian stallion, Eeltsje F (aka "Bob") and out of Destiny SCS, was purchased as a yearling by an FEI level, USDF Gold Medalist in Colorado. He is destined for great things in the dressage ring!

Daiyu is a very special young mare with amazing potential!