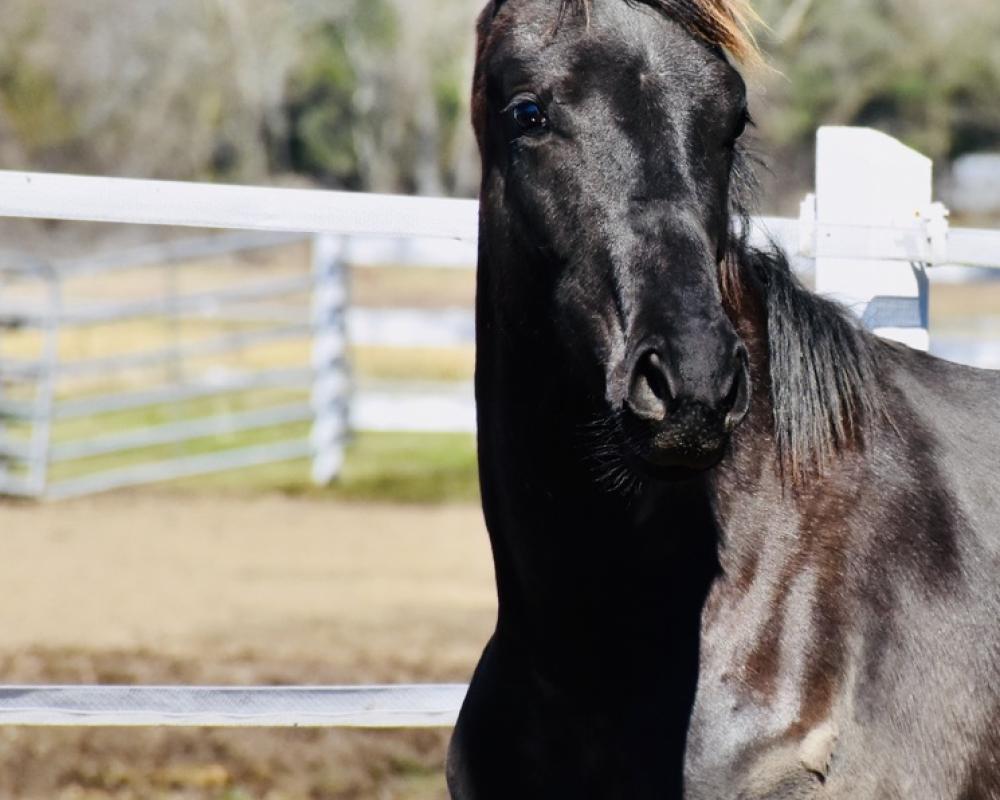 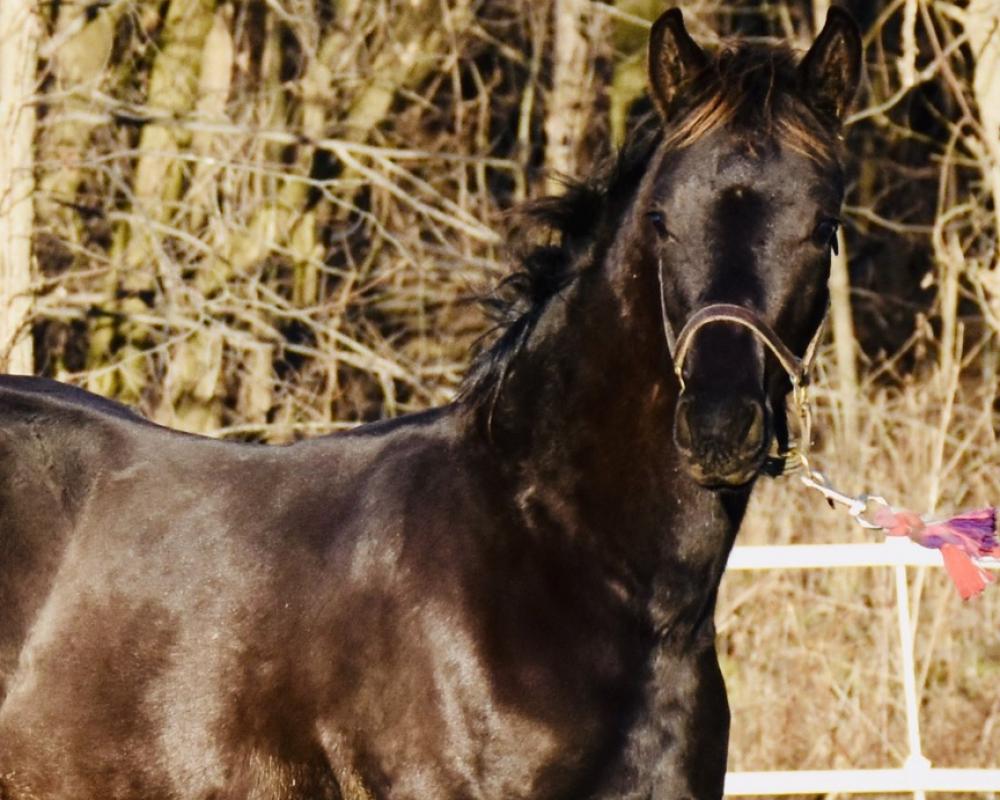 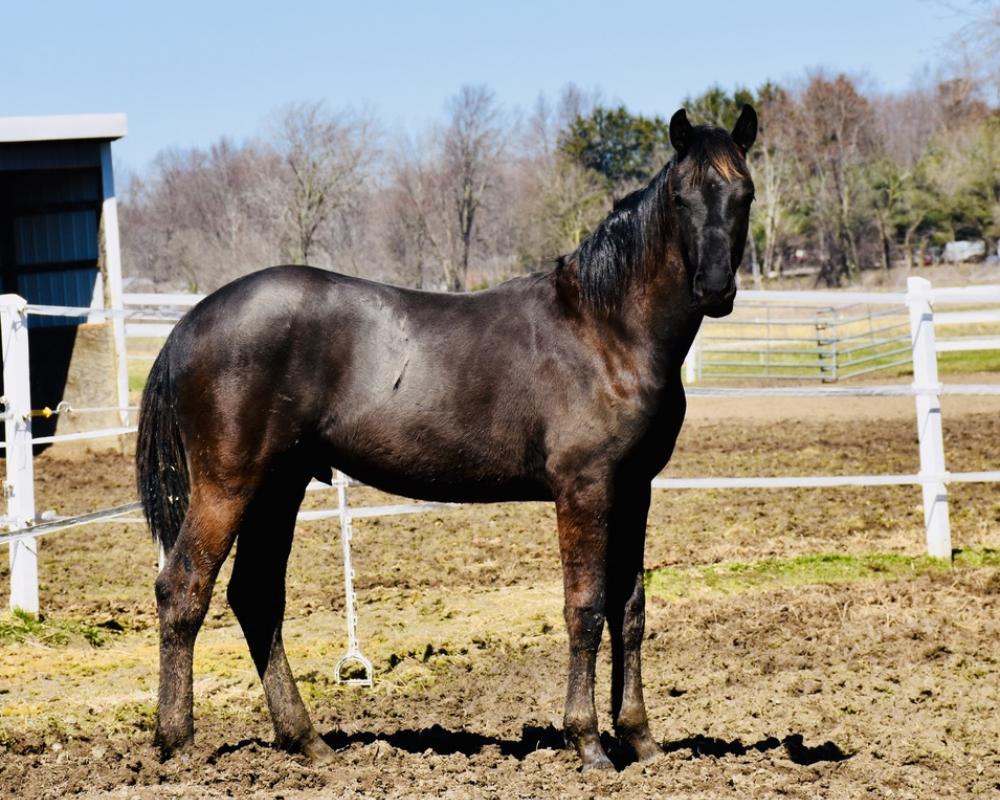 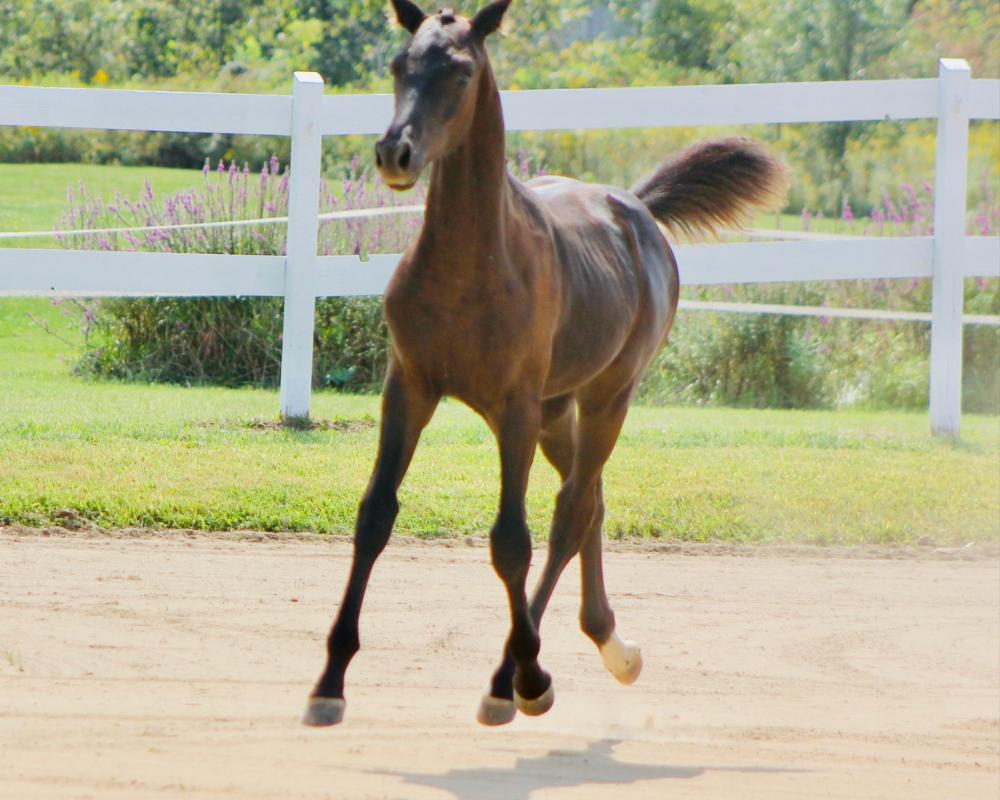 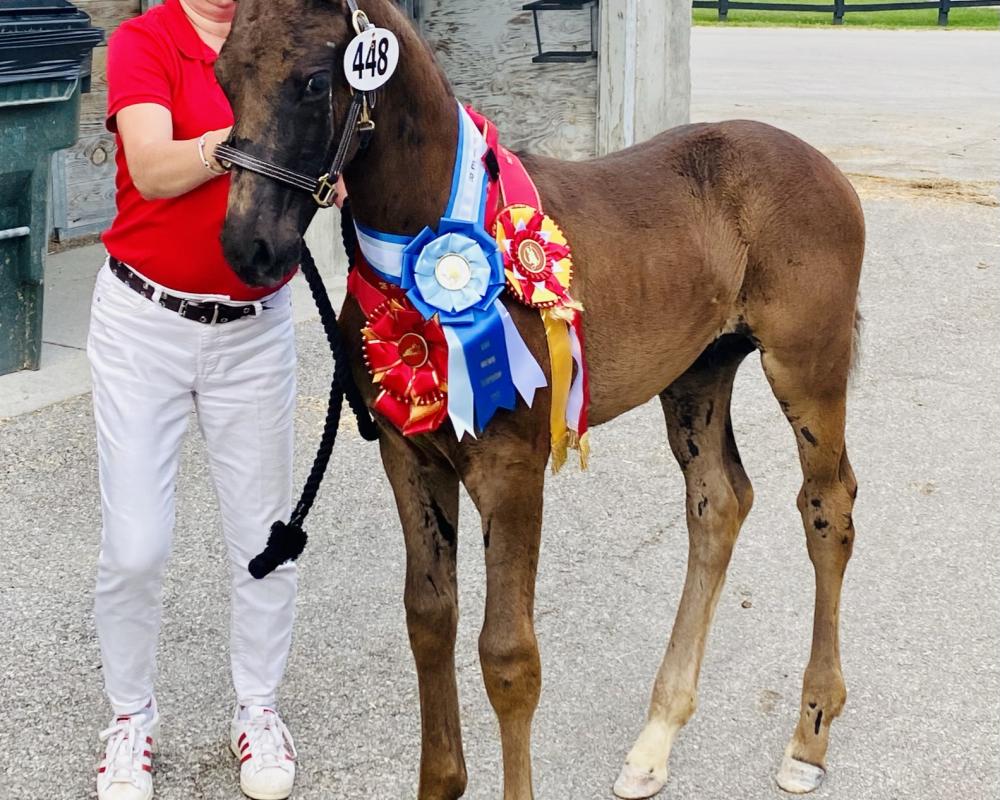 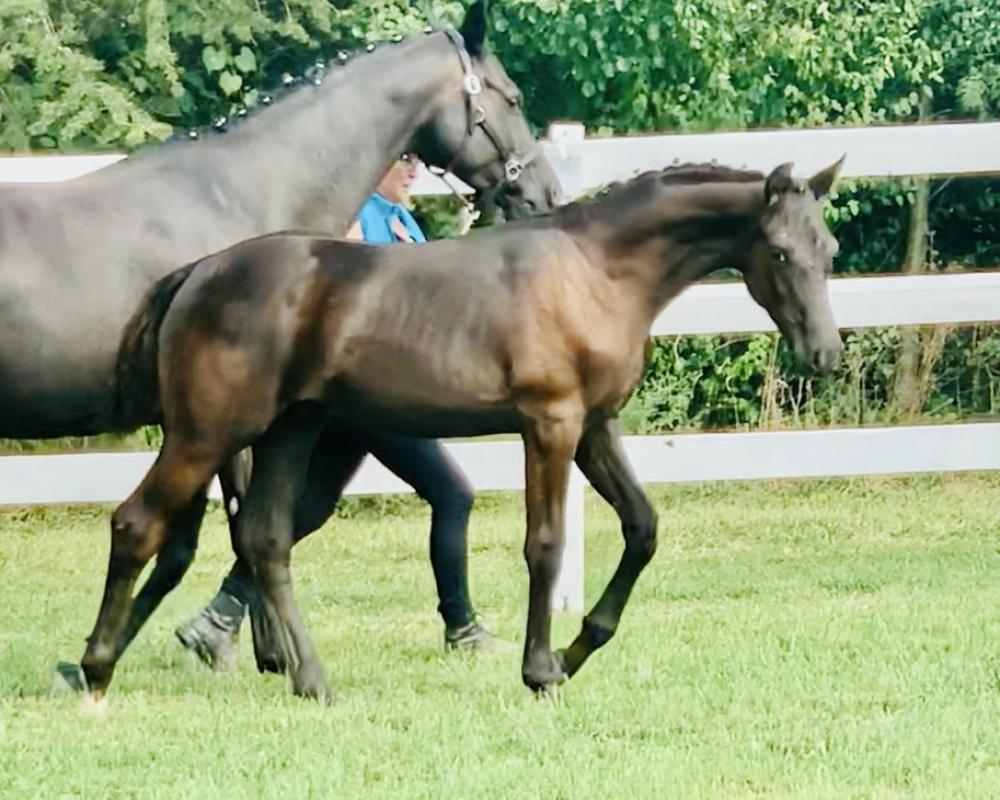 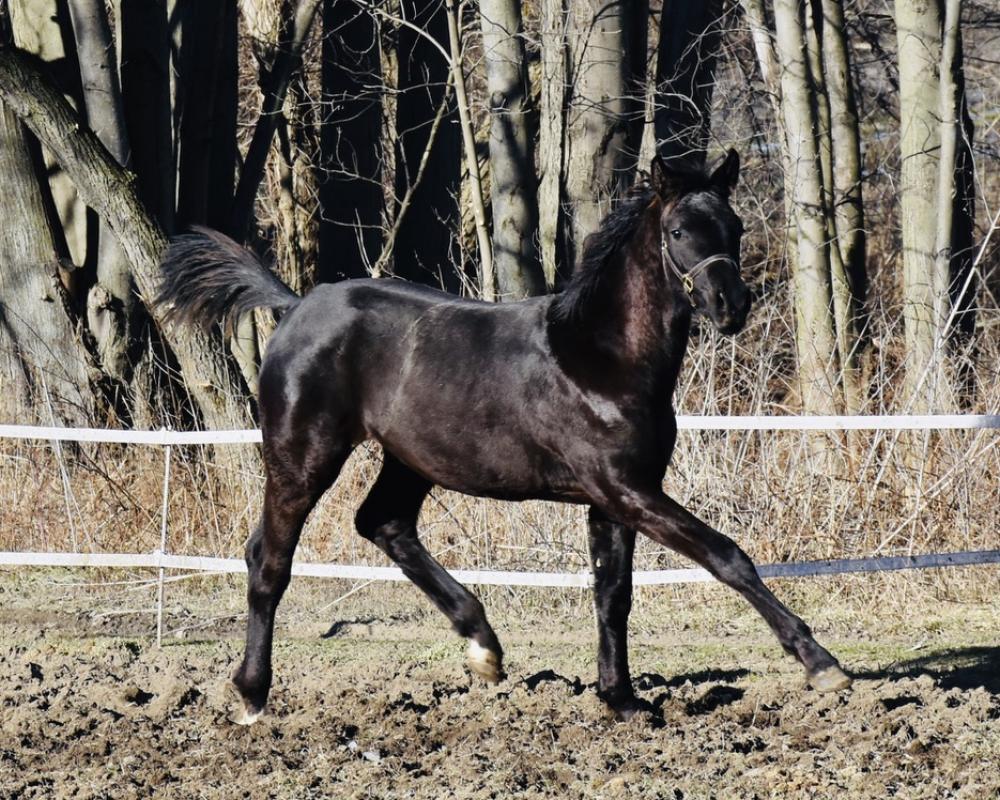 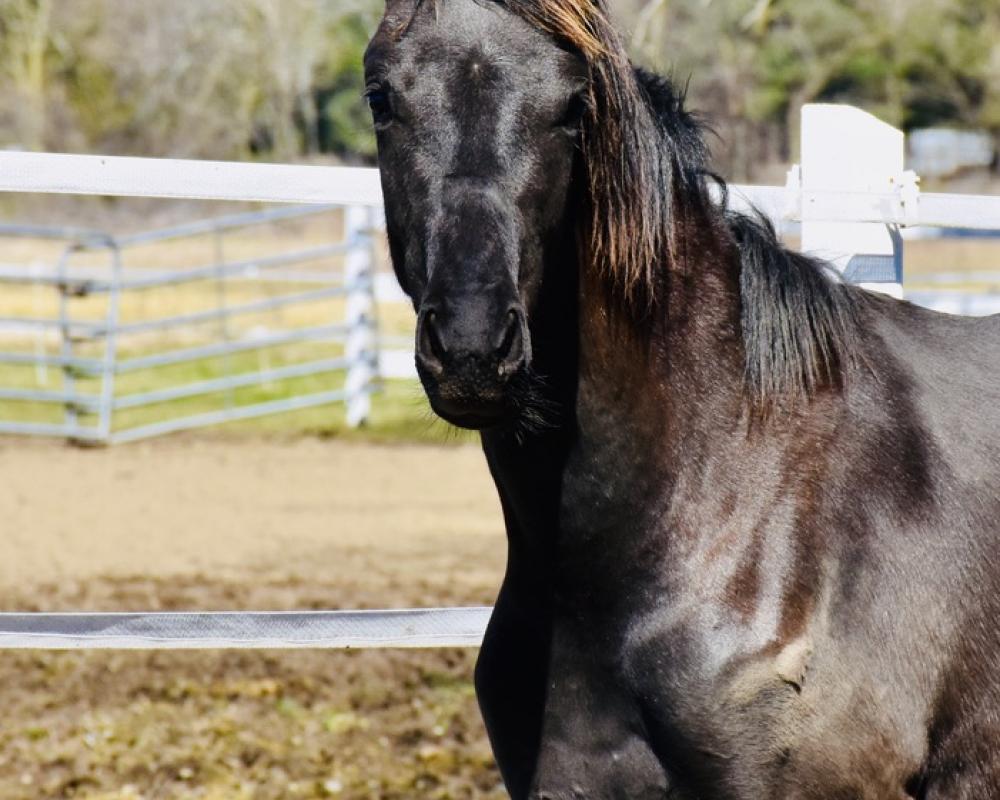 DandyLyon MKF is a very well tempered and friendly Hanoverian colt. He was born on May 6, 2021 without complication. He is already showing great movement with a swinging walk, elastic trot and uphill canter. He is black bay with one white hind and one partial white hind. He is by the Hanoverian stallion, Dauphin (Donnerhall) out of our gorgeous Premium mare, FloraBella (Furstenball/Rosenthal/Wolkentanz I). His bloodlines indicate that he will be successful in the show ring. He is a promising colt with a bright future ahead!

This colt’s dam, FloraBella, possesses all the bloodlines you could possibly want in a broodmare…Florestan, Donnerhall, Rubinstein & Weltmeyer! FloraBella is a Premium Oldenburg mare by Furstenball (Furst Heinrich/Donnerhall) out of the top-performing, champion mare, Rosentanz (Rosenthal/Wolkentanz I). FloraBella is a very typey black mare with beautiful conformation, an elegant head, a high set neck, straight legs and a wonderful people-oriented personality. Everyone that walks by her comments on her beautiful feminine expression.

FloraBella’s dam line brings us the genes of the legendary dressage sires, Rubinstein and Weltmeyer. Her dam, Rosentanz by Rosenthal, was very successful in regional and national breed shows, winning many high score awards and national titles. She was First in the USDF All Breeds HOY for the German Oldenburg Division in 2006, 2007, 2008 & 2009. In 2009 she was Training Level HOY under rider Jessica Jo Tate with the highest median score ever at that time. Her grand-dam, Wiesentanz, is by Wolkentanz I, a very successful dressage stallion by Weltmeyer.

FloraBella’s damsire, Rosenthal, was a 1998 born Hanoverian stallion by Rubinstein out of Kim (by Karon x Woermann). Rosenthal's dam St.Pr.St. Kim was by Karon, who was the sire of the famous stallion Caprimond. Rosenthal was bred by Wilhelm Kreibaum and then went to Gudula Vorwerk. He was competed by Inga Jahnke up to national Prix St Georges level in the U.S.A. One of his well-known offspring is Rosalut NHF, who was the 4 and 5-year old U.S. Young Horse Champion. Rosenthal sired three licensed sons: Rafael, Rock Solid, RS Reiner K. He was also #1 USDF Dressage Stallion of the Year 2007. More interestingly, in the U.S.A. he particularly influenced the hunter circuit. He was ranked #1 as Hunter Breeding Stallion of the Year in 2016, 2017 and 2018.
The colt’s damsire, Furstenball, is truly a unique stallion. His lightness, submissiveness and elasticity embody the standards for the modern dressage horse. He went for a record as a foal, and subsequently became Champion of his stallion licensing and was a stunning stallion performance test winner out of 44 stallions with a sensational dressage index score of 154.98 points (9.0 or higher a total of 16 times and a perfect 10 for rideability), a very respectable jumping score of 113.65, and an overall score of 145.265 (1st/44). Furstenball showed off his absolutely incredible willingness, strong nerves and relaxed temperament. This wonderful champion stallion demonstrates three elegant and elastic basic paces and natural impulsion. He became Bundeschampion of five-year old dressage horses and won the championship with a score of 9.4. Prior to this, he was Oldenburg Regional Champion with a score of 9.1. He is well renowned as one of the finest progenitors available today and has produced at least 84 licensed stallions as well as many mare champions in prestigious competitions.

Furstenball’s dam, Maradonna, also produced an approved stallion by Dimaggio. This famous dam line, which was founded by breeder Georg Sieverding, with dam, granddam and great-granddam being state premium mares with elite status, leads to the fact that this stallion passes on his outstanding genes to his offspring.

The sire of this colt, Dauphin, has been known as a Celle favorite for a long time, he has a sweet disposition and has always been a gentleman to work with. He was the go to stallion to open the door and let visitors in. Dauphin is on the Top list of the Hanoverian breed for type with an outstanding score of 132, and a 143 for limbs!

Dauphin's legendary sire is Donnerhall, a bloodline that is known for strength of character and dressage ability. Donnerhall, is without doubt the most excellent stallion, and well known as one of the stallions of the century. His impeccable background speaks for itself.
Feiner Stern is Dauphin's dam sire. At the stallion performance test, Feiner Stern achieved 9.0 four times for his ability to perform, rideability, trot and gallop in training, and got more than 120 points in the final result. Due to this performance, in combination with a convincing first crop as well as his impressive appearance, he was awarded the title of main premium winning stallion in Oldenburg in 1987. His first batch of foals brought 4 approved sons, among them Feinbrand, the first reserve champion and Fair Play, the 2nd reserve champion of the 1989 stallion approvals in Oldenburg.

Bred and born at MarKim Farms. Located in SE Michigan.