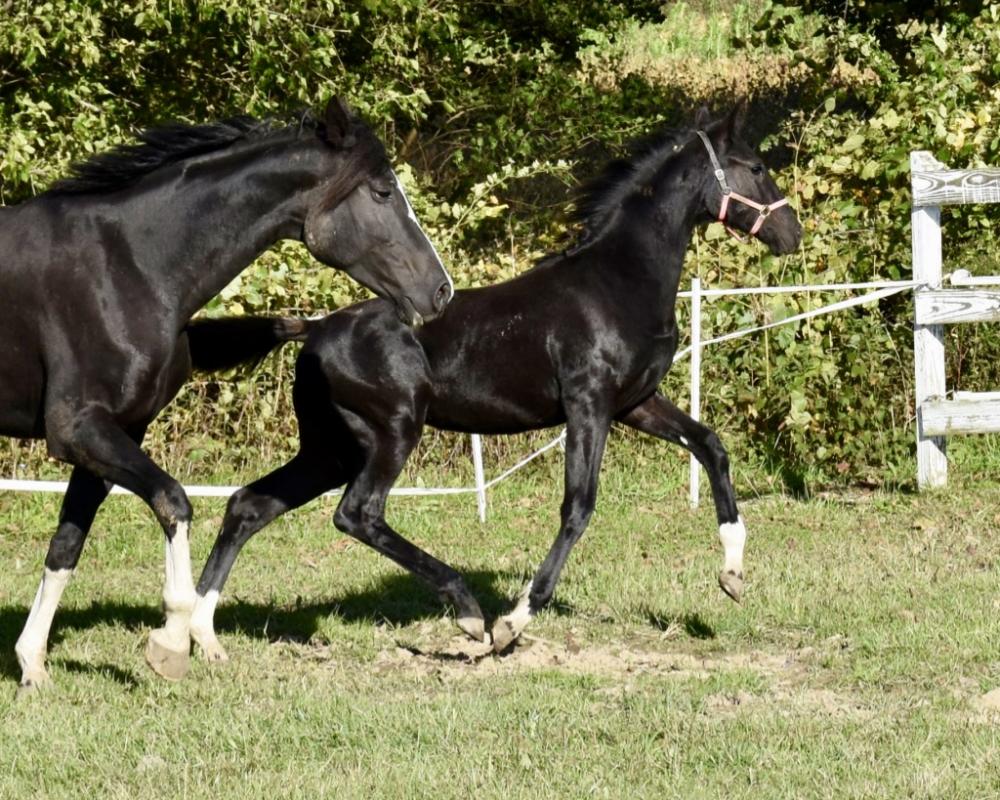 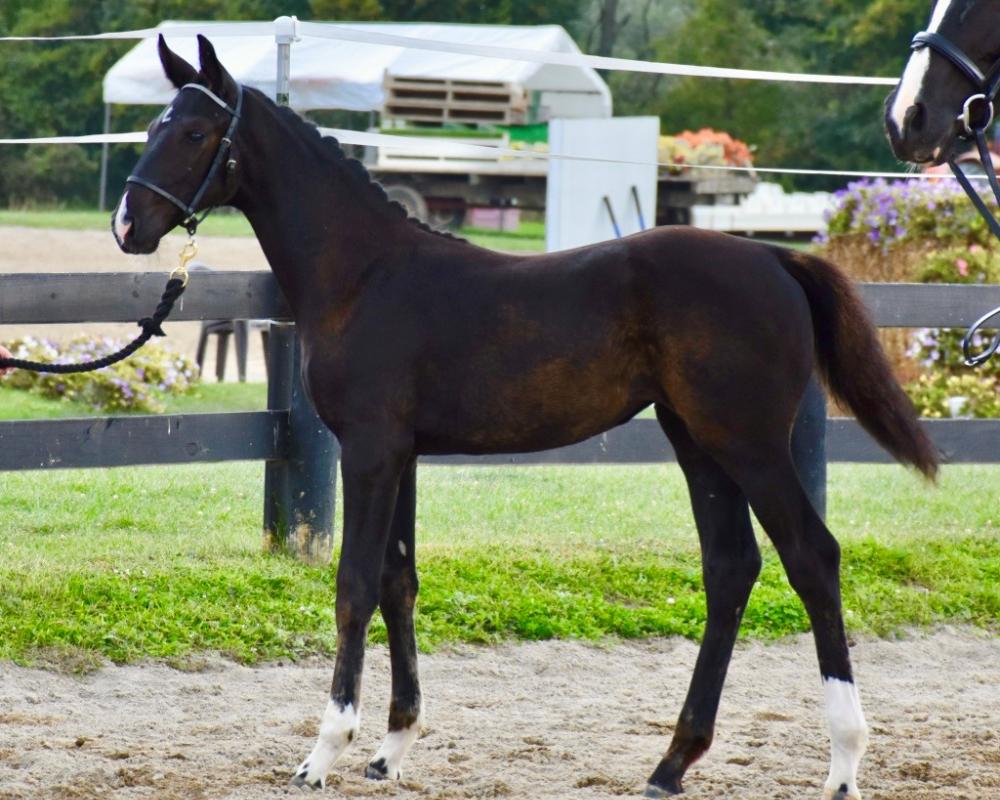 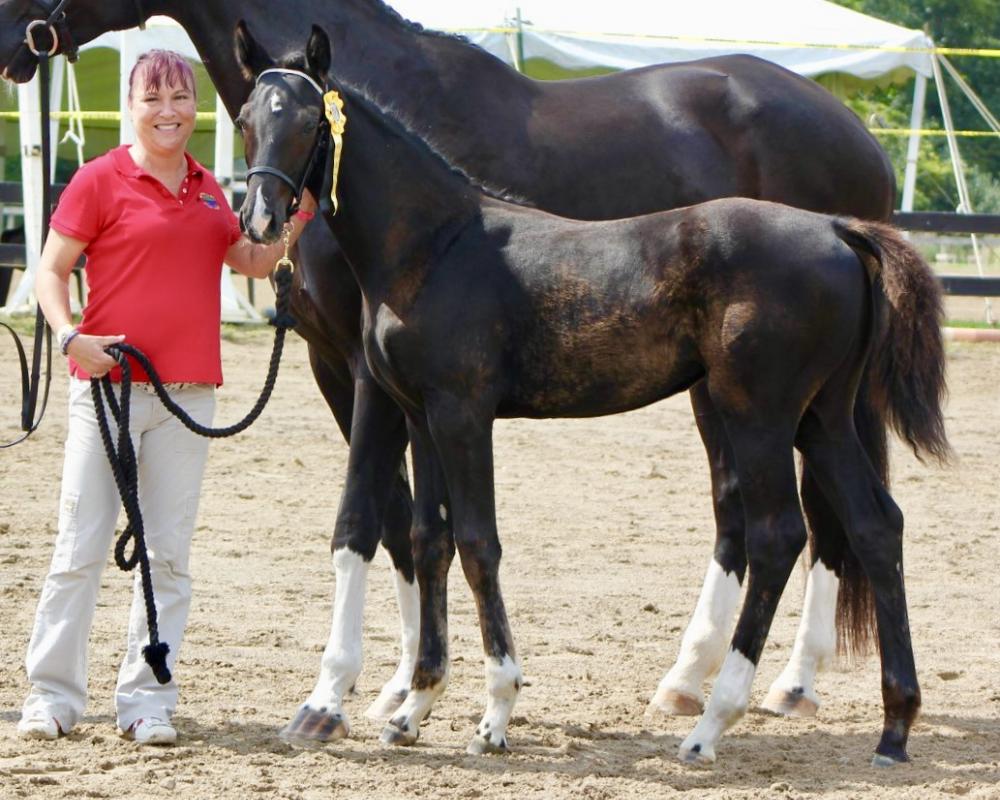 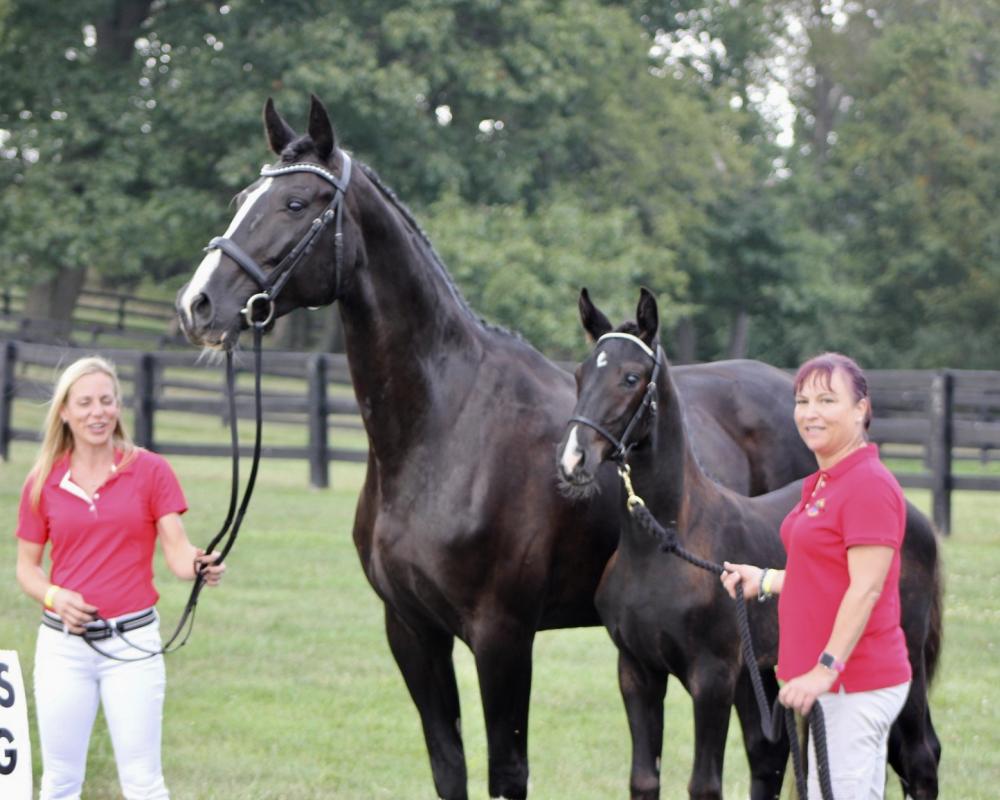 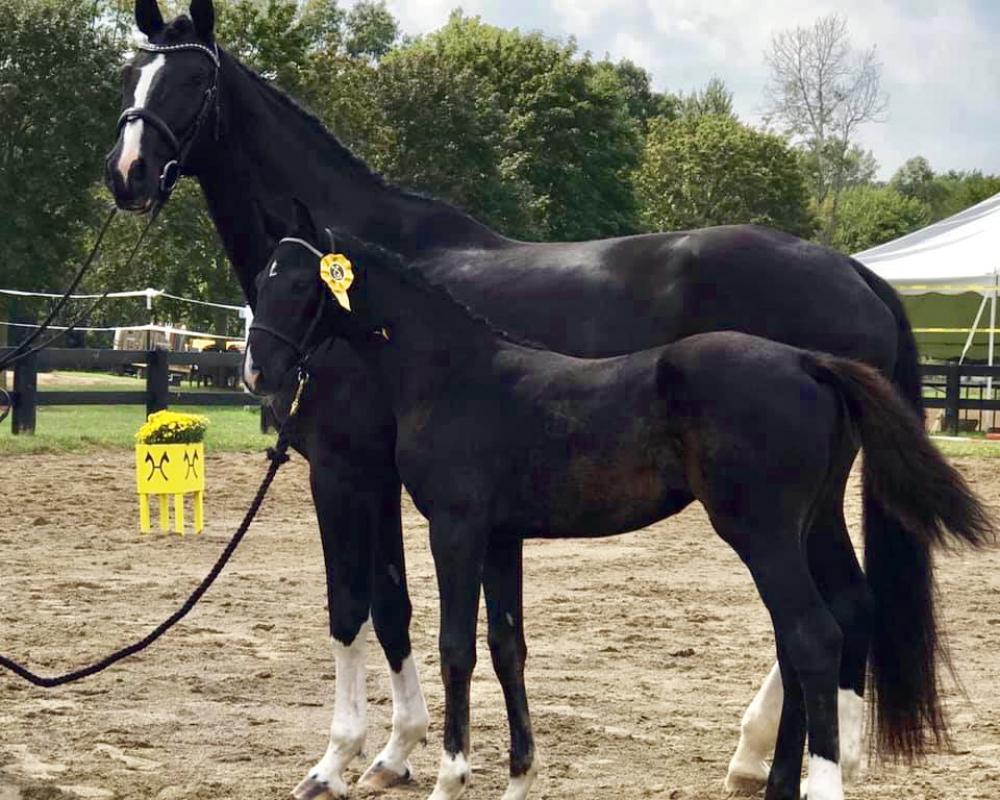 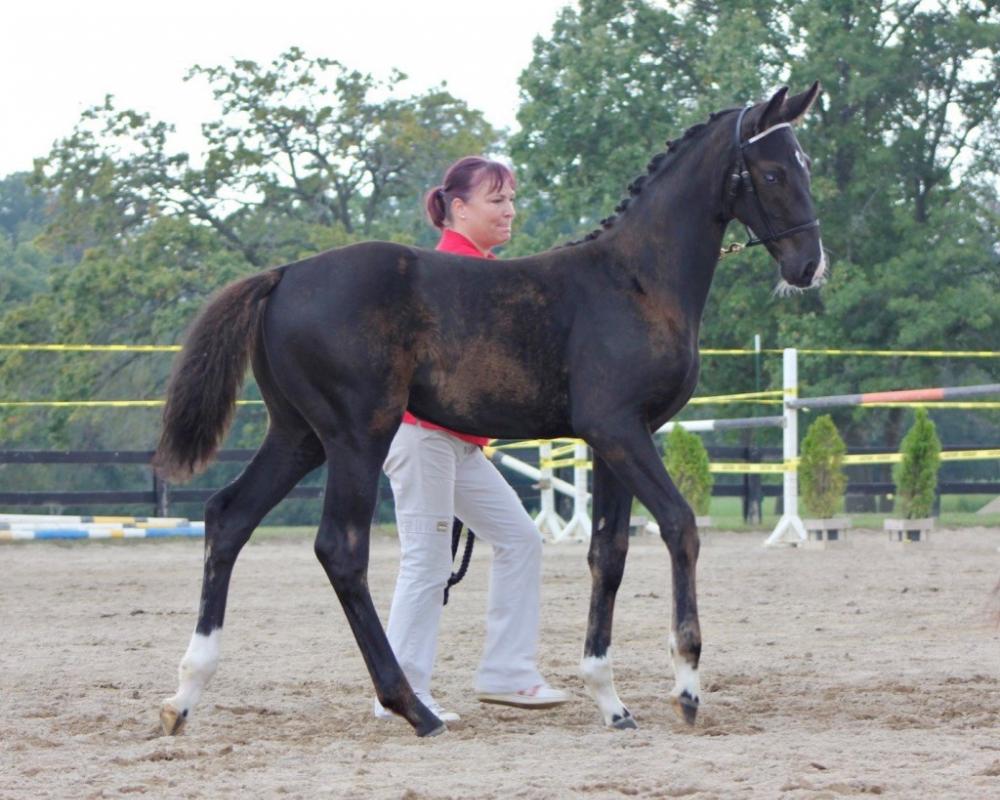 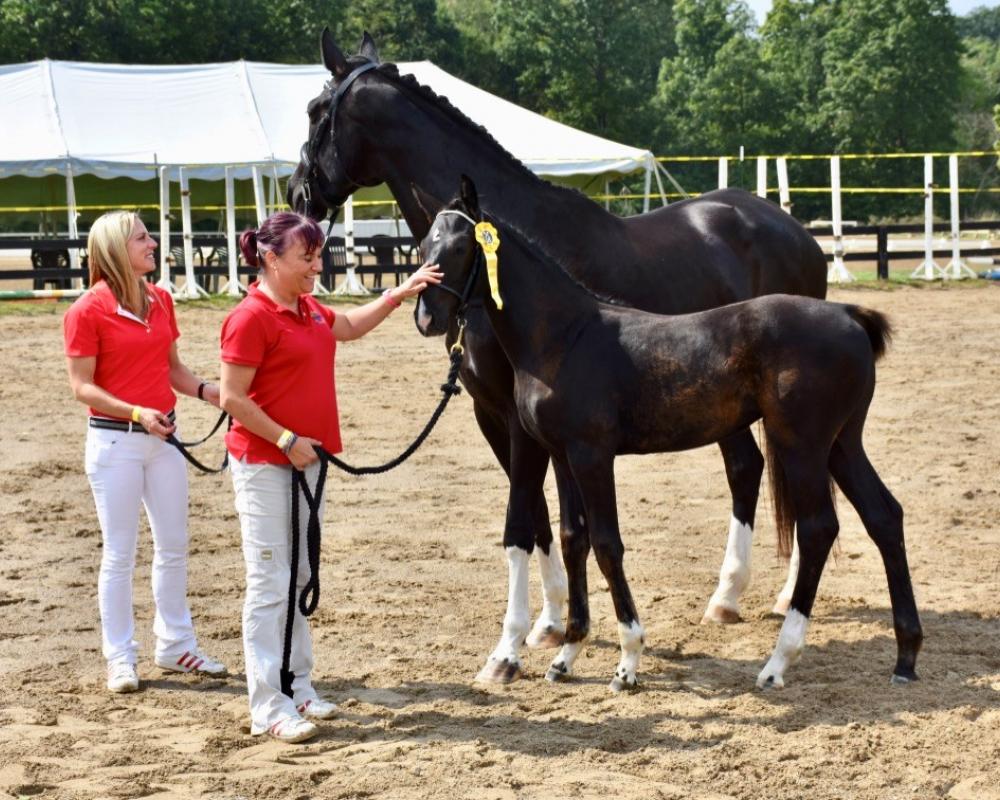 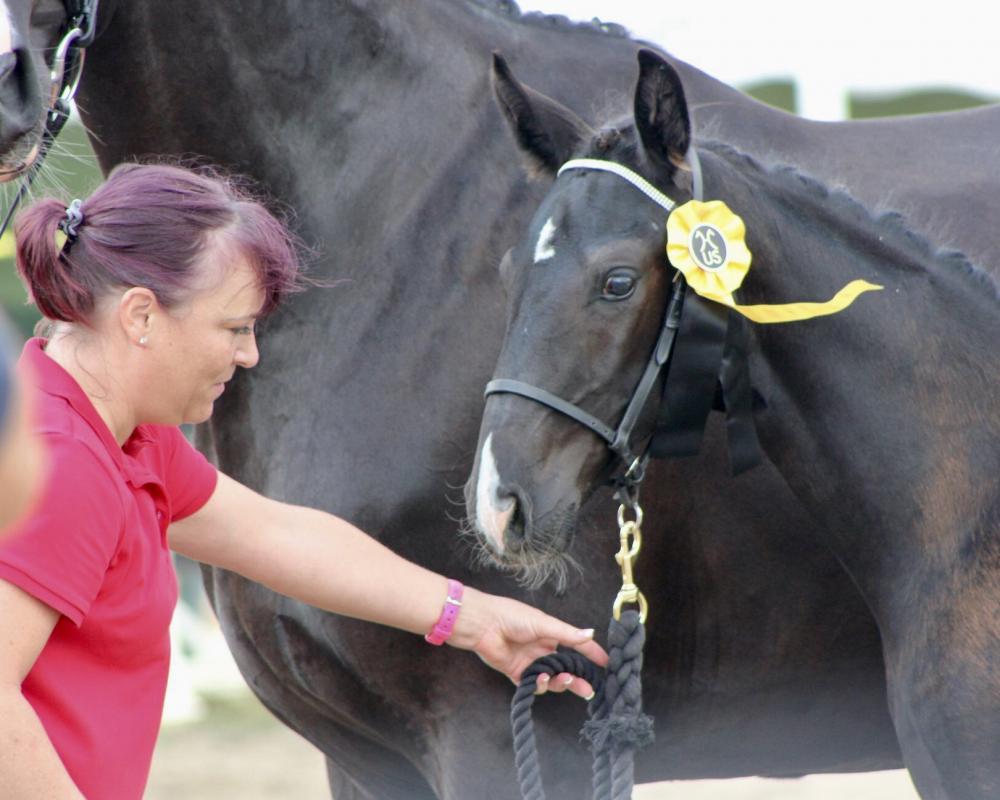 NEW VIDEO - 10-28-19 - The dam of this foal is Esprentina NPF, who is a 2009 KWPN dressage mare by the European stallion Sir Oldenburg (Sion/Contender) and out of an impressive Florestan/Phonix(Pilot) dam. This tall (16.3hh), extravagant mover is a lovely dressage mare through and through. She has a long swinging walk with an ample overtrack, an impressive trot with high knee action and a great reach through from behind. Best of all her canter is VERY uphill and is ground covering. Esprentina is also out of a very strong damline. "Tina" has been approved for Hanoverian breeding by the German Hanoverian Verband.

Tina has produced five lovely foals which have gone on to sell at a young age to CA, NB, MD, NS, and PEI. Several were called into the Final Ring at their Hanoverian Inspection and two were named Top Foal. Daphne MKF was recently awarded Champion Hanoverian filly at her inspection.

The sire of this foal is Dauphin (Donnerhall/Feiner Stern), who has been an outstanding producer of character, rideability, willingness, correctness and movement. He passes his exemplary conformation, type, and wonderful disposition onto his offspring. Dauphin has produced 514 German Hanoverian offspring as of the 2017 publishing of the Hanoveranner Hengst Book. Of the 112 mares that are in breeding, 27 of them were awarded the coveted States Premium Title. He has 6 licensed and recognized sons carrying on the line!
Dauphin has been known as a Celle favorite for a long time, he has a sweet disposition and has always been a gentleman to work with. He was the go to stallion to open the door and let visitors in. Dauphin is on the Top list of the Hanoverian breed for type with an outstanding score of 132, and a 143 for limbs!

Dauphin's legendary sire is Donnerhall, a bloodline that is known for strength of character and dressage ability. Feiner Stern is Dauphin's dam sire. At the stallion performance test, Feiner Stern achieved 9.0 four times for his ability to perform, rideability, trot and gallop in training, and got more than 120 points in the final result. Due to this performance, in combination with a convincing first crop as well as his impressive appearance, he was awarded the title of main premium winning stallion in Oldenburg in 1987. His first batch of foals brought 4 approved sons, among them Feinbrand, the first reserve champion and Fair Play, the 2nd reserve champion of the 1989 stallion approvals in Oldenburg.