Daytona MKF by Dauphin out of Calinca P (Sir Donnerhall/Flemmingh) 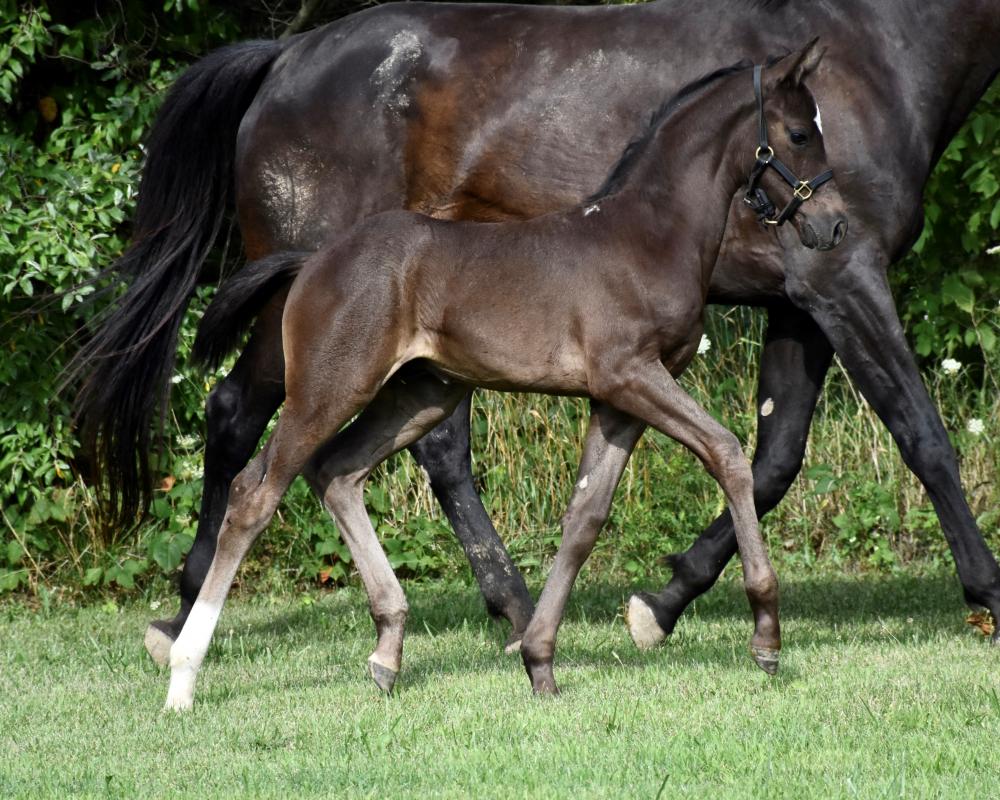 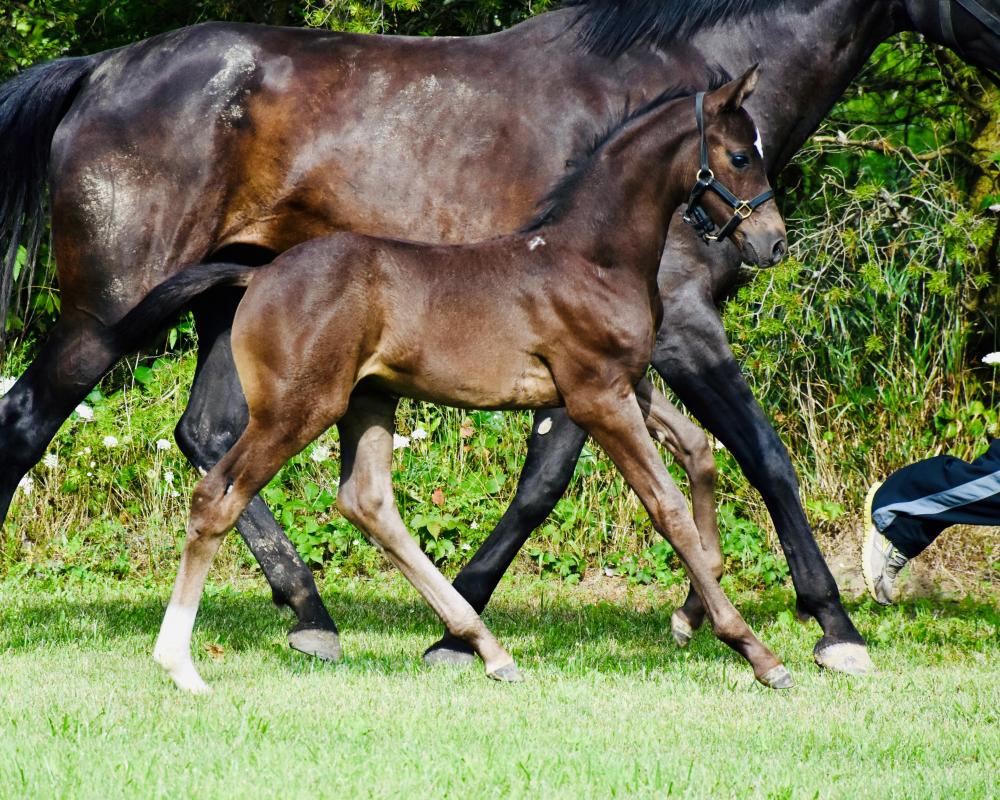 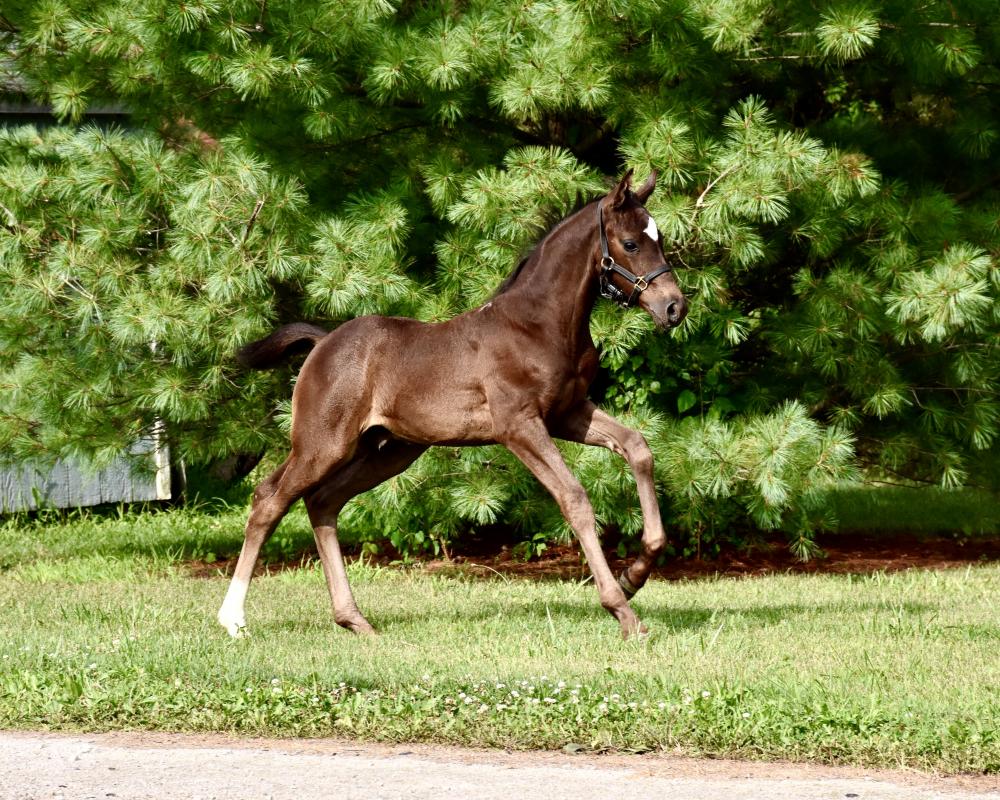 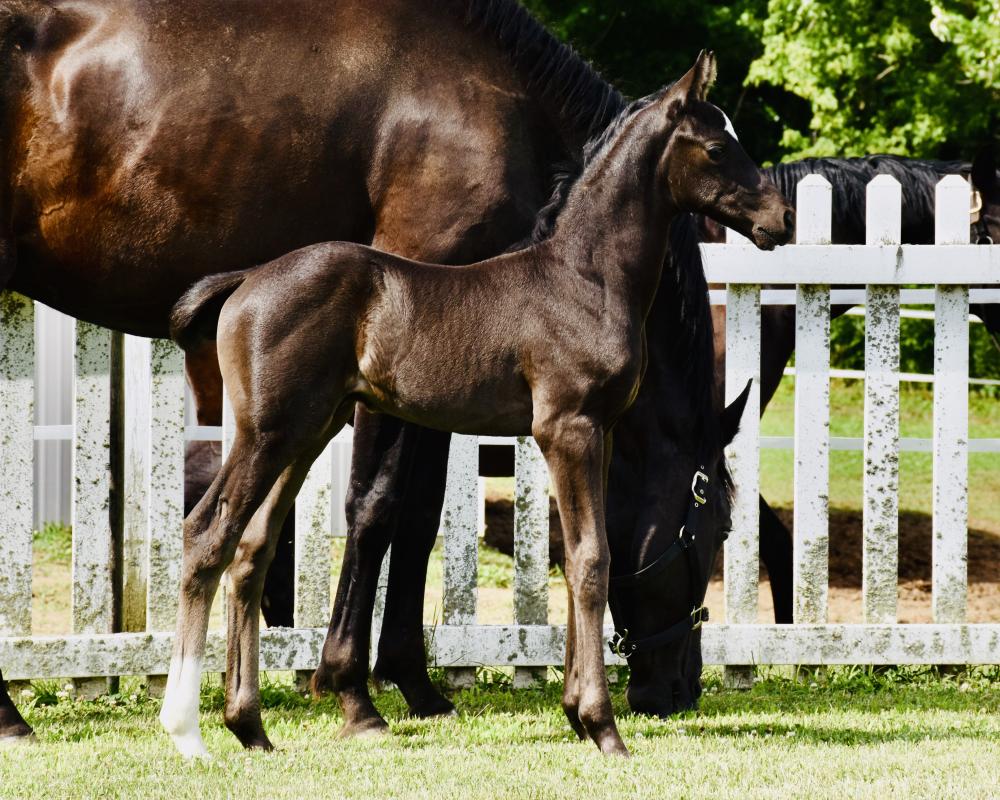 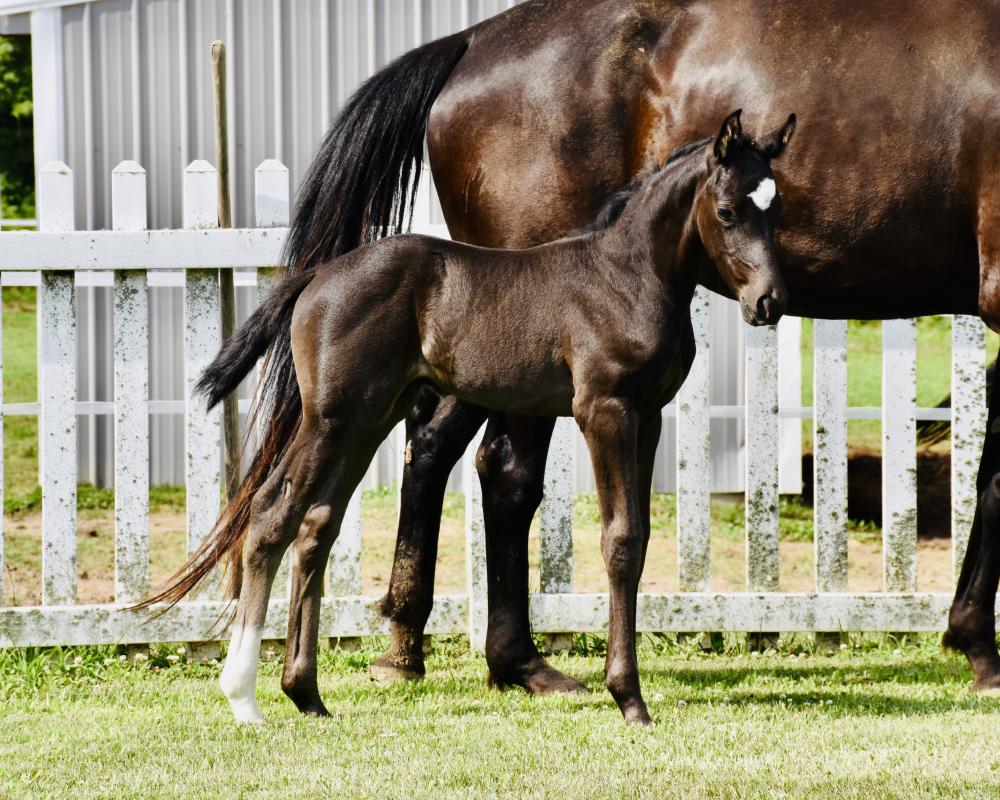 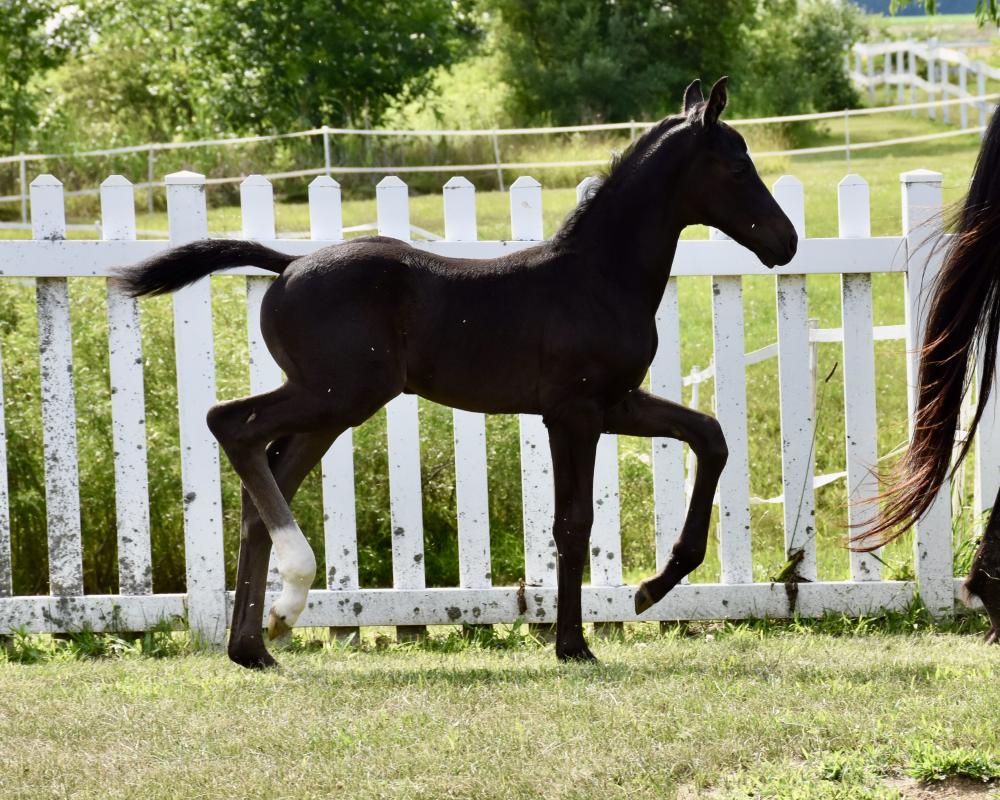 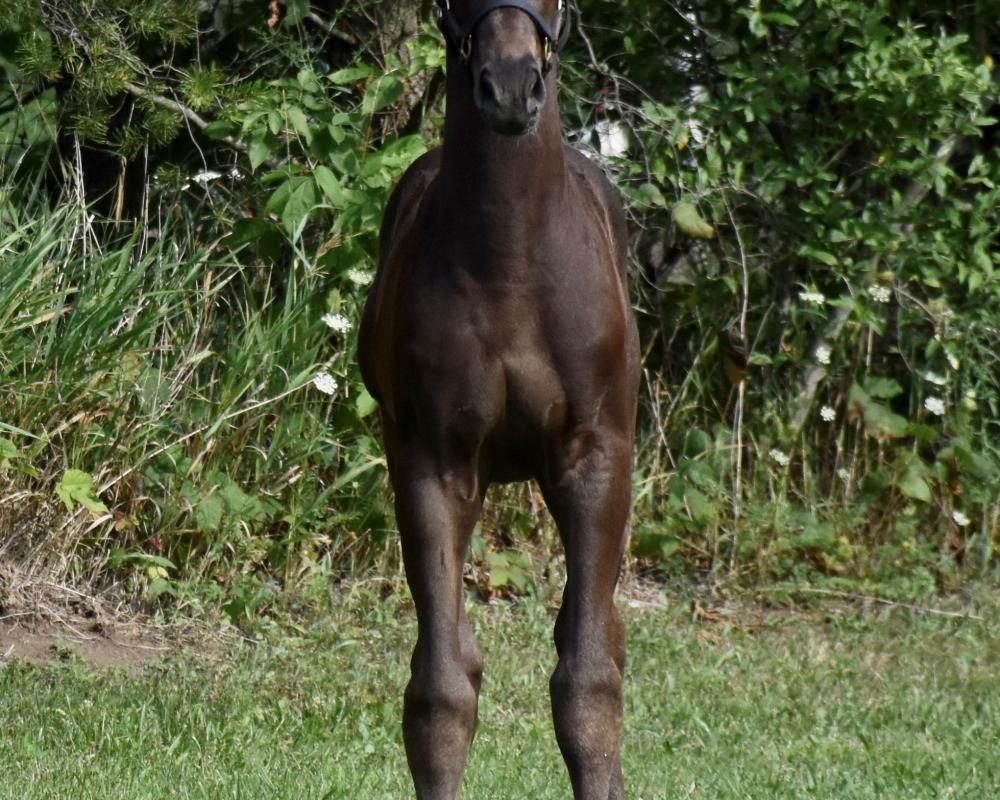 Daytona MKF is a black colt born on June 27, 2020. His sire is the famous Hanoverian stallion, Dauphin. His dam is a gorgeous KWPN mare, Calinca P. This colt is very friendly and outgoing. He loves to call to his people. He has a “10” walk. His conformation is excellent with an extremely lovely neck. We expect him to reach a height of 16.2 hands +/-. This boy has a bright future ahead of him!

The colt’s dam, Calinca P (Sir Donnerhall/Flemmingh/Dutch Boy), was a very high priced auction mare who was imported to the US from the Netherlands as an upper level dressage prospect. She was shown through 4th Level. Due to an injury, she has become a successful broodmare producing beautiful Champion foals. Calinca has been fully x-rayed clean to become a Premium KWPN mare after proven show results. She is big, black and beautiful.

The colt’s sire, Dauphin (Donnerhall/Feiner Stern), has been an outstanding producer of character, rideability, willingness, correctness and movement. He passes his exemplary conformation, type, and wonderful disposition onto his offspring. Dauphin has produced 514 German Hanoverian offspring as of the 2017 publishing of the Hanoveranner Hengst Book. Of the 112 mares that are in breeding, 27 of them were awarded the coveted States Premium Title. He has 6 licensed and recognized sons carrying on the line!

Dauphin has been known as a Celle favorite for a long time, he has a sweet disposition and has always been a gentleman to work with. He was the go to stallion to open the door and let visitors in. Dauphin is on the Top list of the Hanoverian breed for type with an outstanding score of 132, and a 143 for limbs!

Dauphin's legendary sire is Donnerhall, a bloodline that is known for strength of character and dressage ability. Feiner Stern is Dauphin's dam sire. At the stallion performance test, Feiner Stern achieved 9.0 four times for his ability to perform, rideability, trot and gallop in training, and got more than 120 points in the final result. Due to this performance, in combination with a convincing first crop as well as his impressive appearance, he was awarded the title of main premium winning stallion in Oldenburg in 1987. His first batch of foals brought 4 approved sons, among them Feinbrand, the first reserve champion and Fair Play, the 2nd reserve champion of the 1989 stallion approvals in Oldenburg.