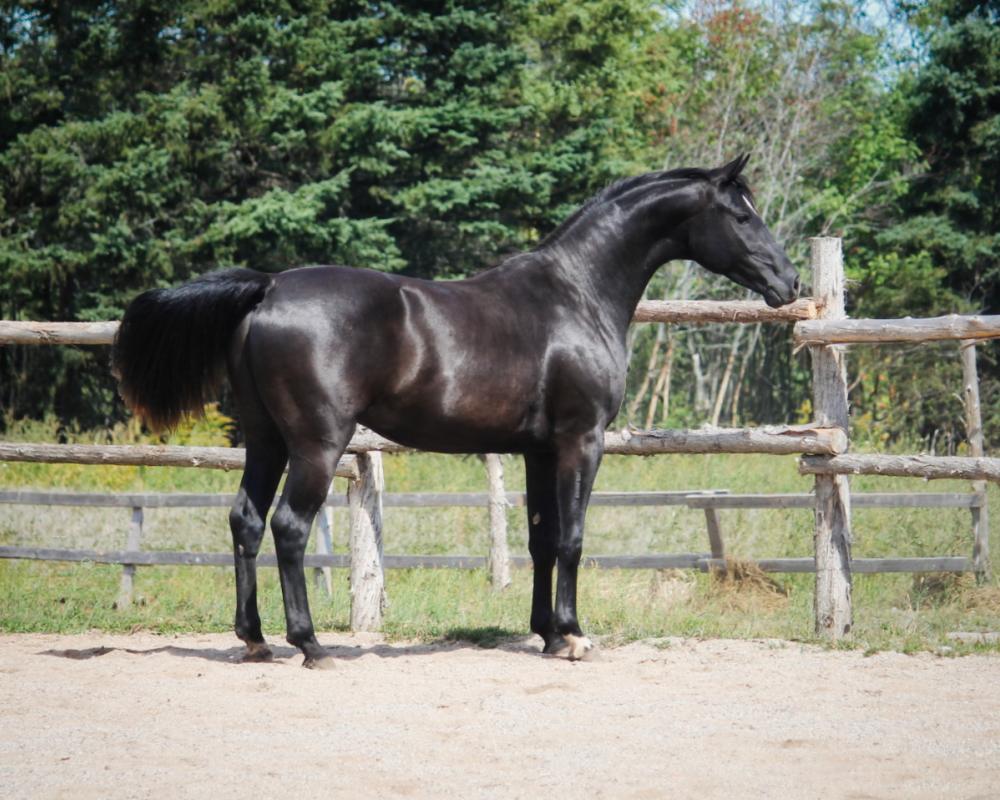 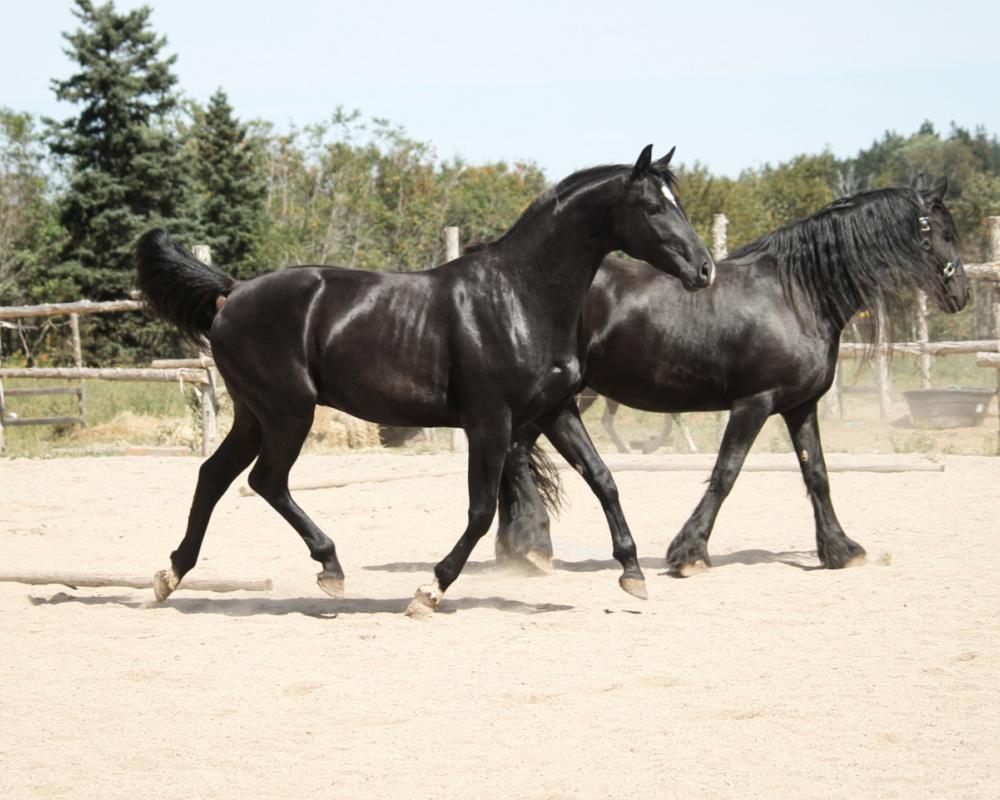 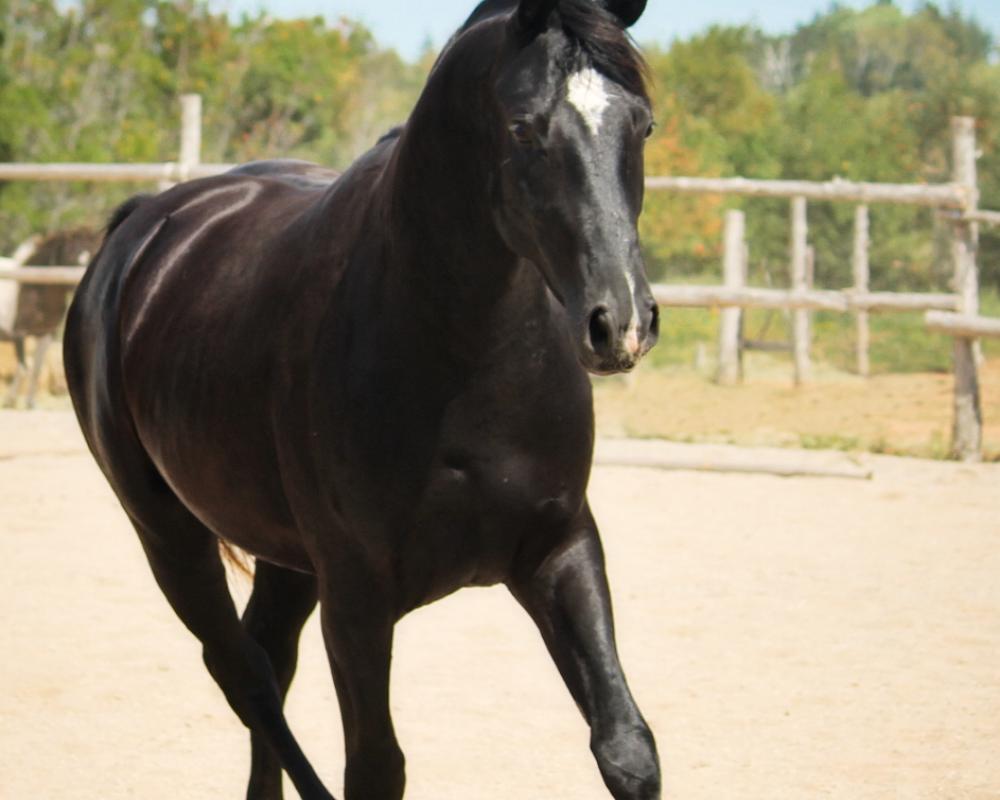 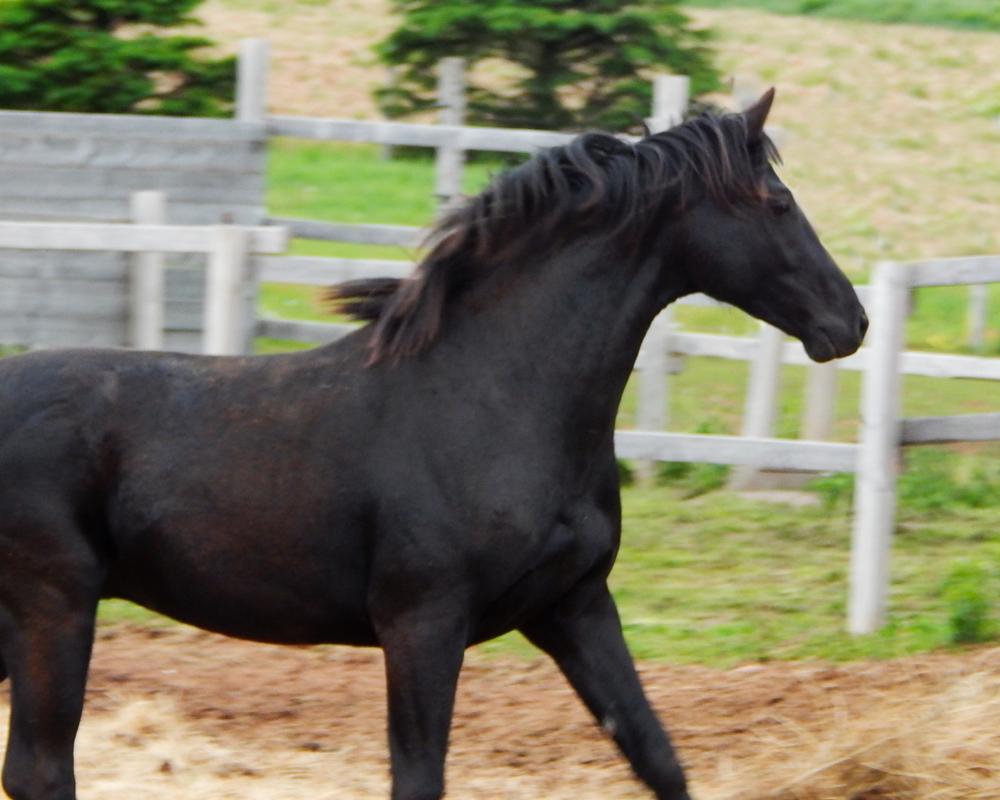 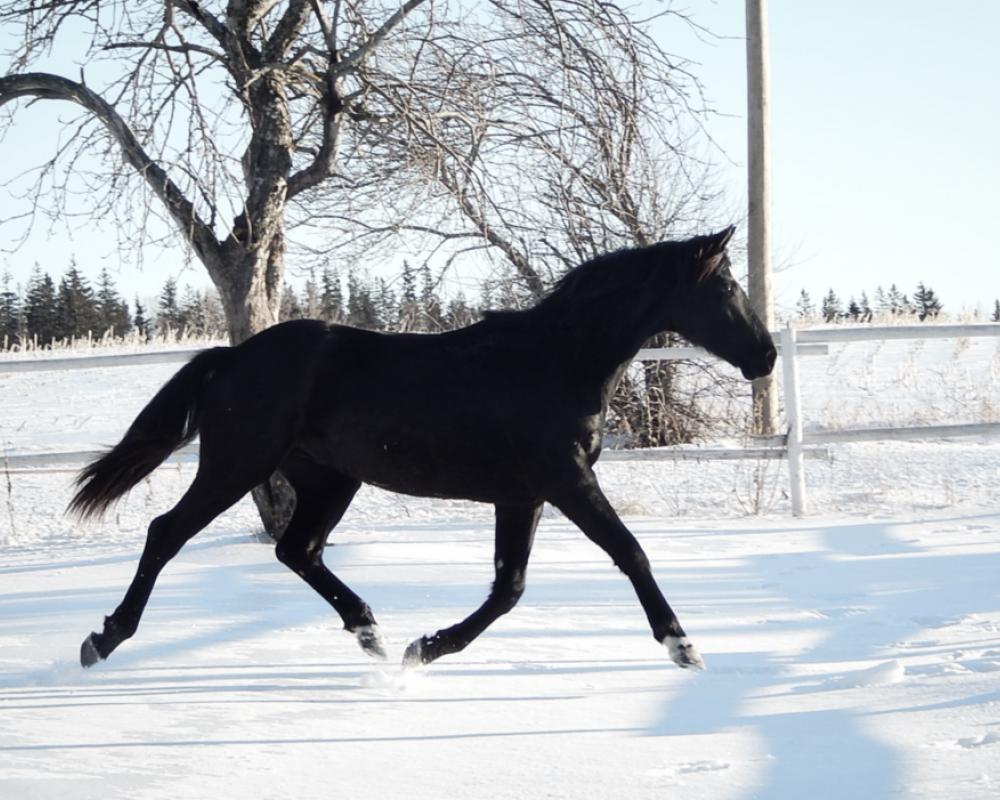 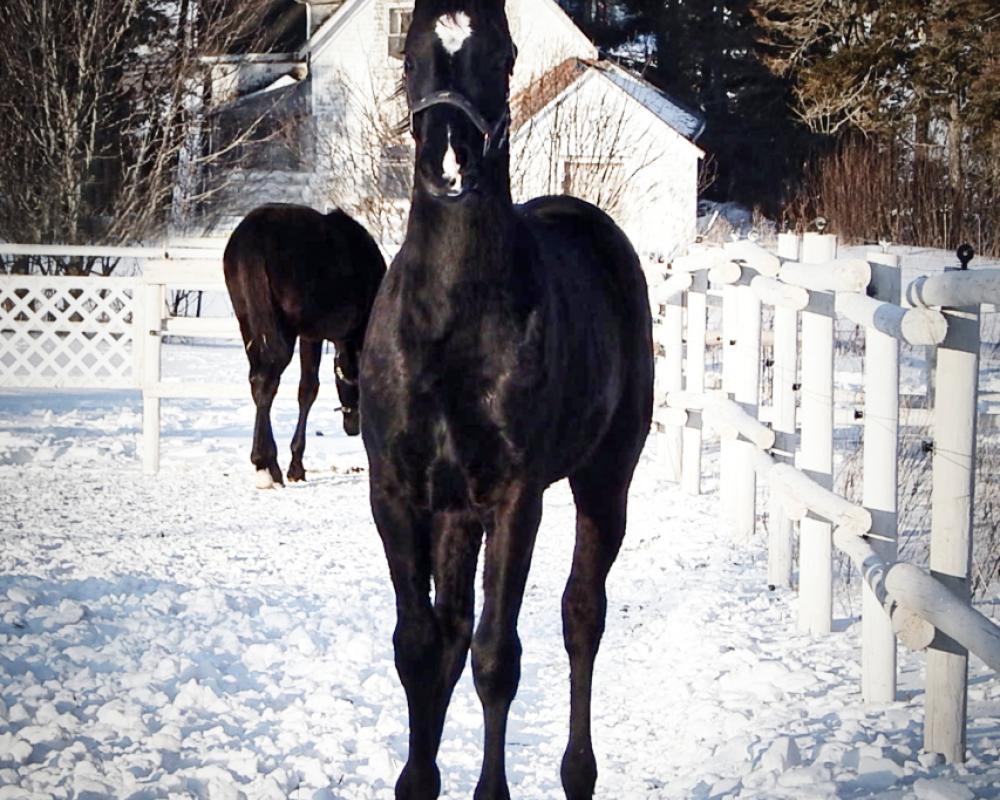 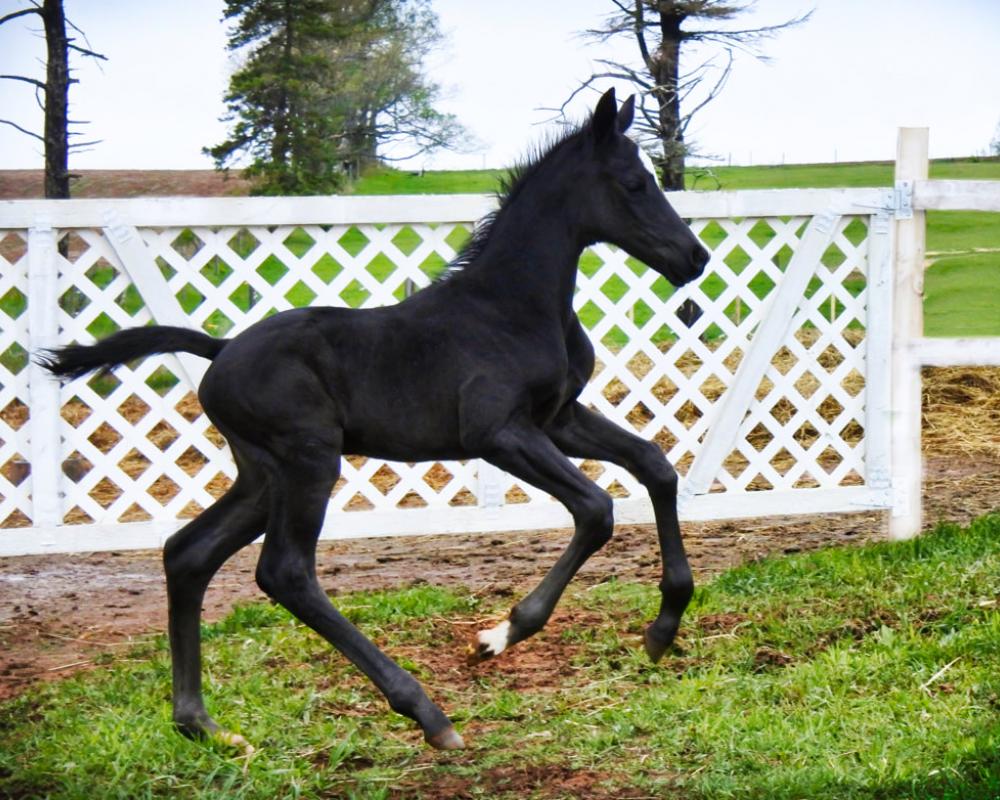 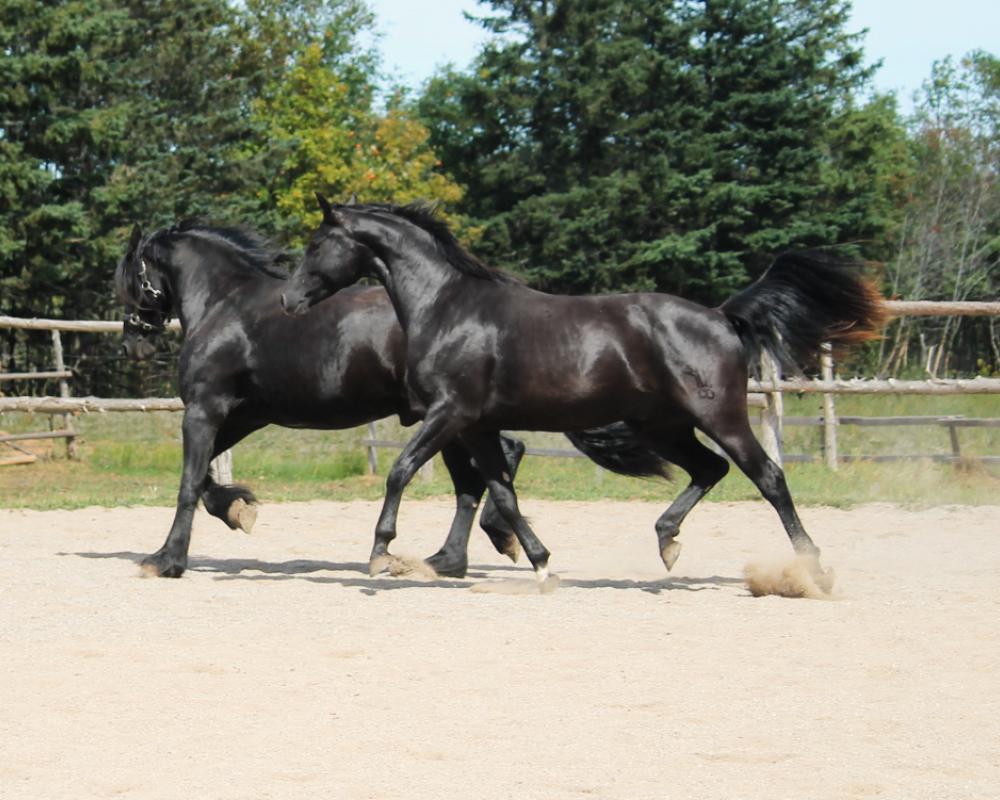 It is unreal how beautiful this black gelding is! He has a fantastic temperament to match - intelligent, curious, brave, playful, loving, and unflappable, with enough swagger to make him shine in the show ring. Three impressive elastic gaits, with an especially good walk. He shows a lot of ability to sit in trot already, and is extremely agile and supple in the canter. Should be a comfortable ride once broke to saddle. Angel will make a competitive upper level dressage mount or super fancy hunter. Personality wise he is best suited for someone with a good sense of humour who likes a forward thinking horse with loads of character. This is the type of horse that will give you 110%.

Please note: Angel has been diagnosed with intermittent dorsal displacement of the soft palate (DDSP).

More info, photos, and video on his webpage: www.stargazerfarm.ca/angel

Angel's sire, Dauphin, competed at M level before an injury sidelined his under saddle work. He has produced over 500 German Hanoverian offspring. Of the 112 mares that are in breeding, 27 of them were awarded the coveted States Premium Title. He has 6 licensed and recognized sons carrying on the line! Dauphin has five offspring competing at S class in dressage and one in S class jumping. He has 259 offspring now competing in sport. Dauphin has been known as a Celle favourite for a long time for his sweet disposition. Dauphin is on the top list of the Hanoverian breed for type with an outstanding score of 132, and a 143 for limbs!

Dauphin's sire is the legendary Donnerhall. The 2011 Hanoverian Stallion book (the last in which he appears) records that Donnerhall has had 998 competitors, 840 dressage competitors (226 at advanced level) – and even 97 in the jumping ring. He was the sire of 50 licensed sons at that stage.

Dauphin's dam sire was Feiner Stern who at his stallion performance test achieved 9.0 four times for his ability to perform, rideability, trot and gallop in training, and got more than 120 points in the final result. He was awarded the title of main premium winning stallion in Oldenburg in 1987. His first batch of foals brought 4 approved sons.

Angel's dam, Daisy, is by Donarweiss GGF who was Champion Stallion of his Hanoverian Licensing, and winner of his 30-Day Stallion Test, with an overall score of 8.33. He showed his versatility with individual scores of 9 for rideability and jumping technique. He was trained & competed successfully to Grand Prix in 2010/2011 by Christopher Hickey. FEI Young Horse scores to 81%, Prix St.Georges scores to 72%, 2009 USDF All Breeds I1 Champion, NEDA Year End I1 Champion, and 2010 USDF All Breeds Intermediare I1 3rd in Nation. In 2011 he sold to the young rider, Genay Vaughn. In 2013 the pair were Reserve National Champions in the U-25 Grand Prix Division and won the Region 7 USDF Championships for Intermediare II Jr/ Yr. In 2015 they were one of two combinations selected to represent the United States in the U-25 Grand Prix Division in Europe. They were the highest ranking American combination in their division in multiple European Nation Cups. In 2017 Genay and Donarweiss were members of the U-25 Grand Prix Silver Medal Team in Florida. Donarweiss has successfully competed at Grand Prix for over nine years.

Donarweiss is by De Niro, ​2008 Hanoverian Stallion of the Year, who is referred to as "the embodiment of the Hanoverian stallion." De Niro has become a legend as a dressage sire, and he has been very successful in sport himself. In his career as a sire, De Niro has produced over 70 licensed sons, and his offspring are successful in the dressage arenas world wide. He continually tops the WBFSH ranking for dressage sires year after year.

Donarweiss' damsire was the influential Trakehner stallion, Hohenstein I, who was reserve champion at his stallions performance test in 1994 at Adelheisdorf, where he received the highest dressage index of 148.29 from all 53 stallions in this class. Hohenstein I is sire of more than 20 licensed stallions. Hohenstein I is Elite stallion and was proclaimed Trakehner Sire of the Year 2002.
​
Daisy's dam Larissa, although bred for jumping, was trained for dressage and was still competing at 4th level dressage into her 20s. Her sire was the successful Celle sire and how jumper, Loredo by Lord. In addition to having been bred from such great procreators as Lord and Capitano, Loredo also represents Holstein bloodlines 185, which produced Ramiro, sire Raimond and Mitch (by Marlonx). Larissa's damsire was the legendary sire Paradox I. In 1994, a life size bronze monument was erected in Paradox I’s honor on the grounds of the Westfalen State Stud at Warendorf.