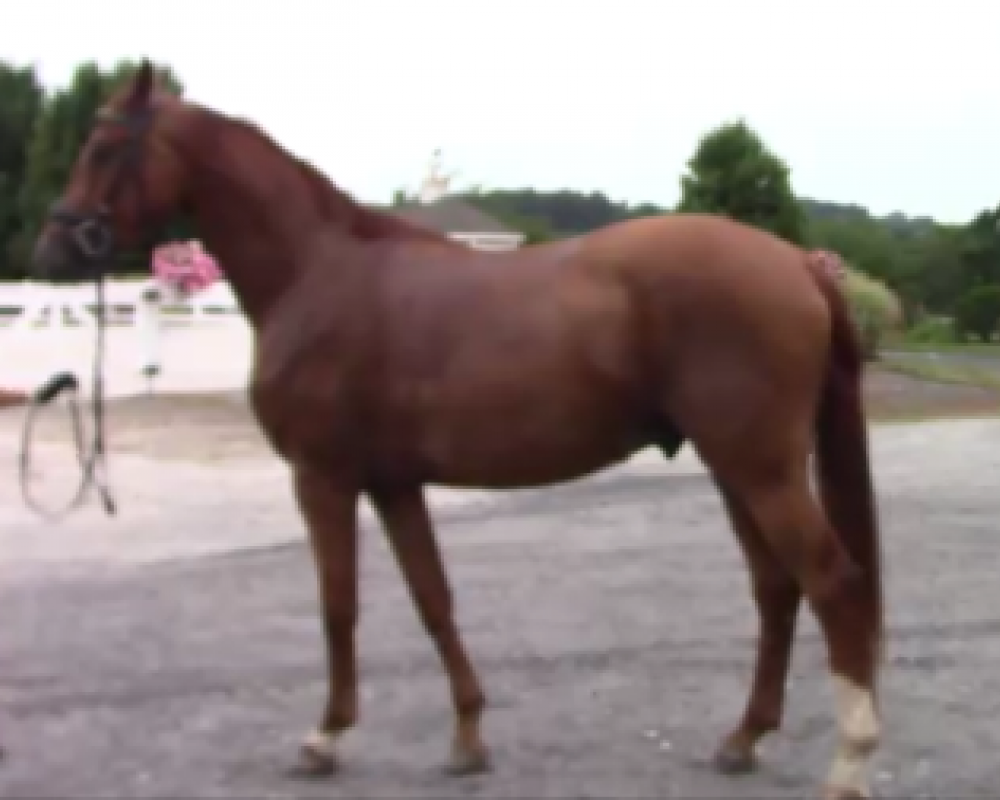 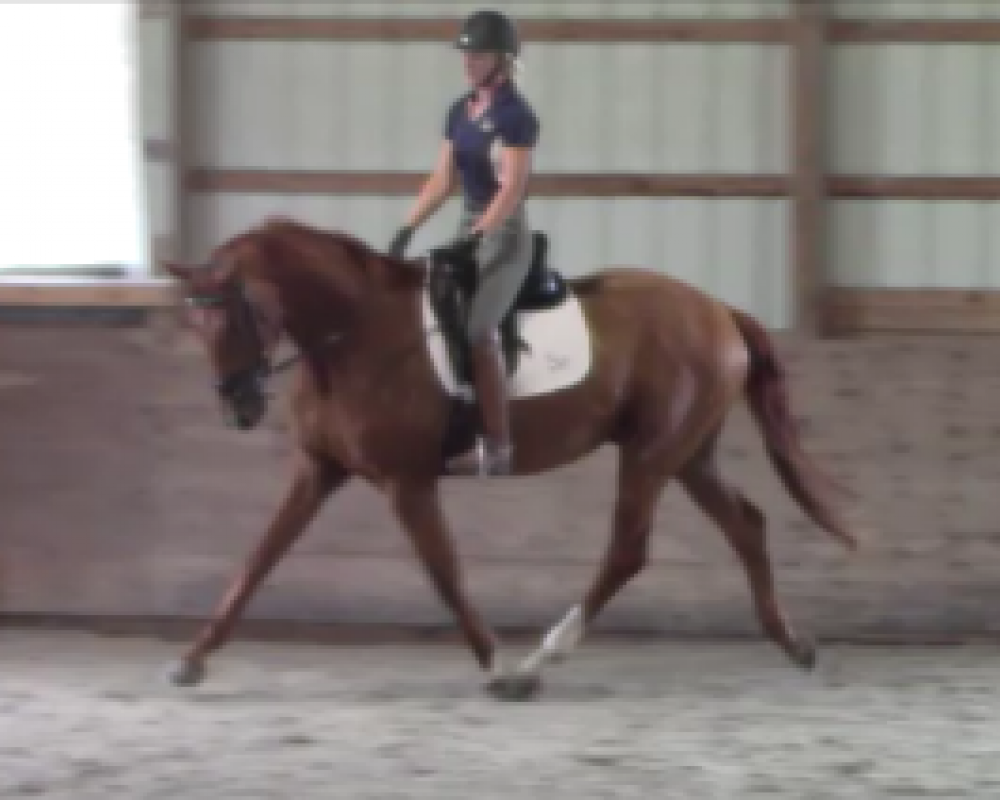 Dhiplomat-
3 1/2 year old, 16.2 h Premium German Oldenburg (GOV) gelding by Dheputy (Dauphin/Rotspon) out of Special Premium Shusquehanna (Shakespeare
RSF/DeNiro). Super prospect for hunter (shows some ability and form over small jumps) or dressage.  Very rideable with a volunteer attitude, although still green under saddle. He is making rapid progress in his training.

Dhiplomat's sire Dheputy is a 4th generation of Rolling Stone Farm's breeding program and the 2nd licensed stallion from his dam.  Dheputy is sired by Dauphin, a Donnerhall/Feiner Stern son who is published in the yearbook of the German FN with positive points for dressage, riding horse points, and
foundation.  Dheputy’s dam is Elite Mare Rhussia, by Rotspon.  She produced another stallion which was licensed by the AHS- Somer Hit, who has since gone on to be named National Champion FEI 6 year old in 2012, and who in 2014 was ranked 4th USDF Horse of the Year for Intermediate II. At Dressage Breed Shows in 2013, Dheputy was named Stallion Champion three times, Mature Horse Champion three times, Grand Champion once and Reserve Grand Champion twice.  He also competed in Training level and Materiale classes with scores up to 78.5%. He was the USDF Horse of the Year for Stallions in 2013 with a score of 82.050%.  He successfully completed the 70 Day Stallion Test in OK in 2013, placing fourth overall, third in dressage and sixth in jumping.  He scored a 10 for Character, 8 trot, 9 walk and 8.5 canter.  In 2014, he continued his winning ways, competing at training and first levels with many wins and scores up to 73% and he again was Stallion Champion at three Dressage Breed Shows.  He was the GAIG/USDF Stallion Champion at Dressage at Devon 2014 and was 2nd in the Materiale.  He was named 2014 USDF Horse of the Year for Stallions for the second year in a row with a score of 80.750%.

Dhiplomat's dam, Special Premium Shusquehanna was the WINNER of our GOV Mare Performance Test in 2016, with the high score under saddle. Her scores included 8.5 free trot, 8's for trot under saddle, rideability, breed and sex type and trot in hand, 7.5 for walk under saddle, canter under saddle, general impression and development, neck and frame. These scores allowed her the awarding of Special Premium Candidate. With the birth of her first foal Dhiamond in 2017, she became a Special Premium Mare

Warmblood breeder for 42 years. Owner of large Oldenburg (GOV) and Hanoverian breeding farm in eastern PA. Young, well started dressage horses and occasional hunter prospects always available. USDF Gold Breeder of Distinction. We have produced 37 Elite Mares and Elite Mare Candidates, and 3 State Premium Mares for the Hanoverian Society, and 30 Special Premium mares and 17 Verbands Premium mares, 191 Premium Foals and 48 Foals of Distinction for the German Oldenburg Verband. She has produced 9 licensed stallions, including the fully licensed and approved stallion named Shakespeare RSF (winner of the 2009 70 day stallion test), a licensed stallion named Somer Hit, 3 licensed stallions in 2012 (one from the first foal crop of Shakespeare RSF- Shotgun, also Dheputy and a stallion in Germany), Fhitzgerald and Sir James (both imported from Germany and successfully completed the 70 day stallion test here in the US), another licensed stallion in 2014 named Shavane- the second licensed Shakespeare RSF son who is out of homebred EM Rheporter (Royal Prince/Weltmeyer). In 2015 another Shakespeare son was licensed- Shortstop, who was Grand Champion at a USDF breed show in 2015. We have bred three top 6 FEI Young Horse National Champions and multiple HOY winners in hand and in dressage, and four winners of the Young Hunters Under Saddle at Hunter Devon. We stand Shakespeare RSF (Sandro Hit/Arrian). Mo estimates she has bred about 450 foals to date and she also sells young stock and about 20-25 riding horses a year. Some of her horses are fourth and fifth generation from her own breeding program. Mo started out in hunters and jumpers and then rode dressage up to the PSG level, not competing much due to family and farm commitments. She finally received her USDF Bronze and Silver medals in 2018. Her homebred Hanoverians and Oldenburgs have been top ten in national dressage rankings and have won many under saddle and in hand classes at many shows such as Dressage at Devon (Grand Champion 2011 and Reserve Grand Champion 2021), NEDA (Grand Champion 2021 and 2022)and the hunter show at Devon. She has produced numerous champions and reserve champions at many in hand shows and has been in the top 8 ranking for USDF Dressage Breeder of the Year since 2013, leading that category in 2020 and 2022. She was the 2016 and 2018 USDF Dressage Sport Horse Breeding Breeder of the Year and has been in the top 16 since 2013. She has been the USEF Dressage Breeder of the Year every year 2014-2021 and was 2nd in that category from 2011-2013 and in 2022. In 2021 she was also the USEF Dressage Breeding Breeder of the Year and prior was in the top 4 for the USEF Dressage Sport Horse Breeder of the Year since 2013. She received the USDF Gold Breeder of Distinction award and in 2020 and 2022 she was the USDF Dressage Breeder of the Year. Her greatest pleasure has been breeding suitable horses for the amateur market in the disciplines of dressage or hunter with an emphasis on rideability and movement.
Email Seller Now
Visit Seller Website
More Horses From Seller