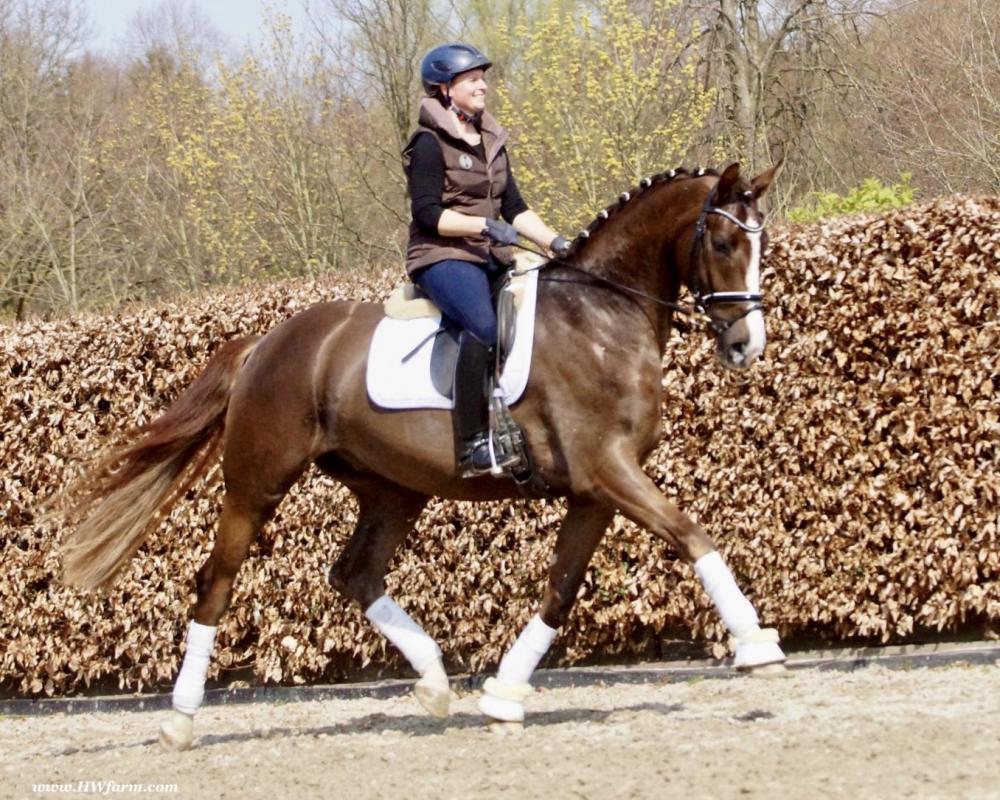 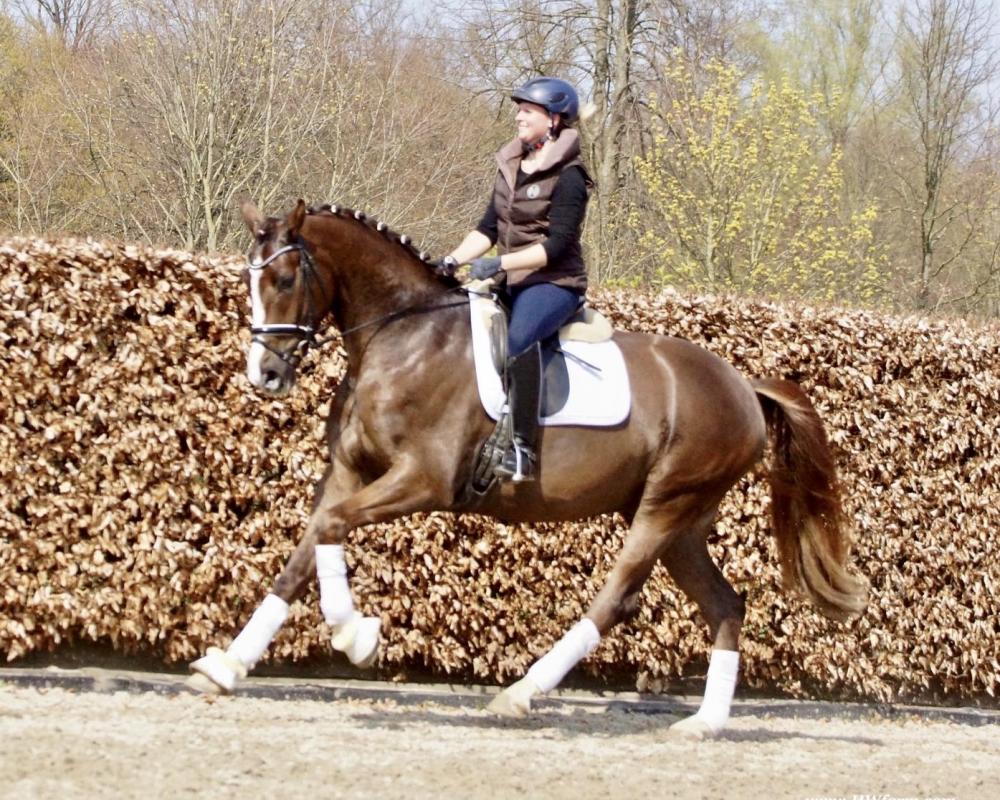 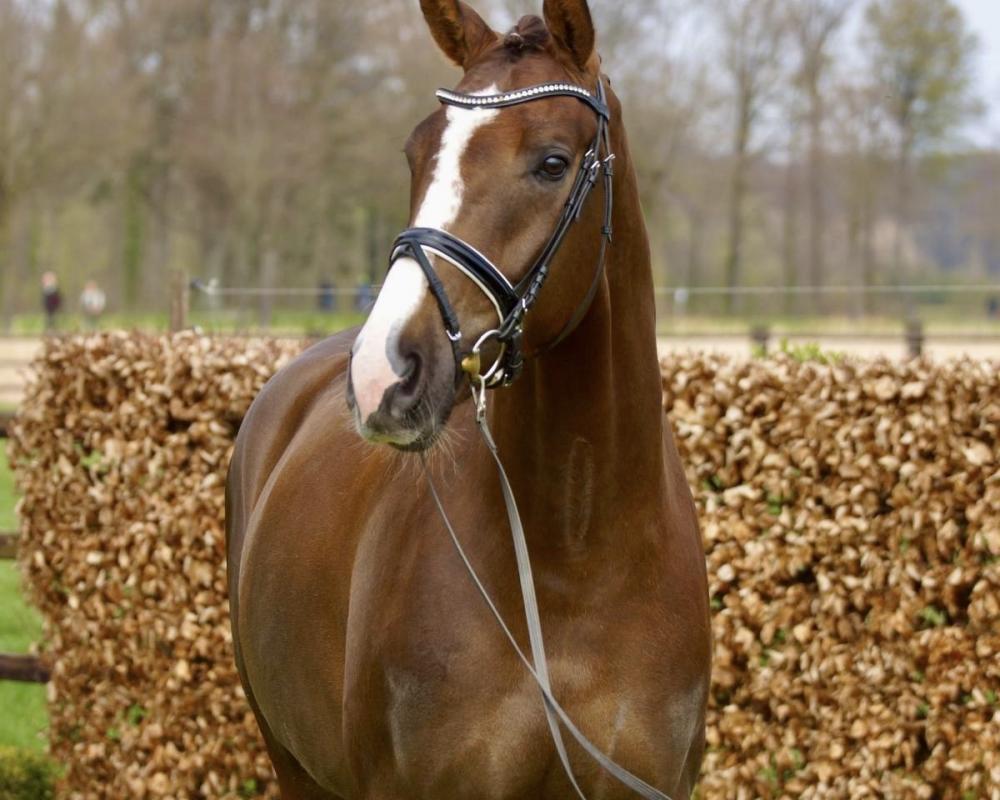 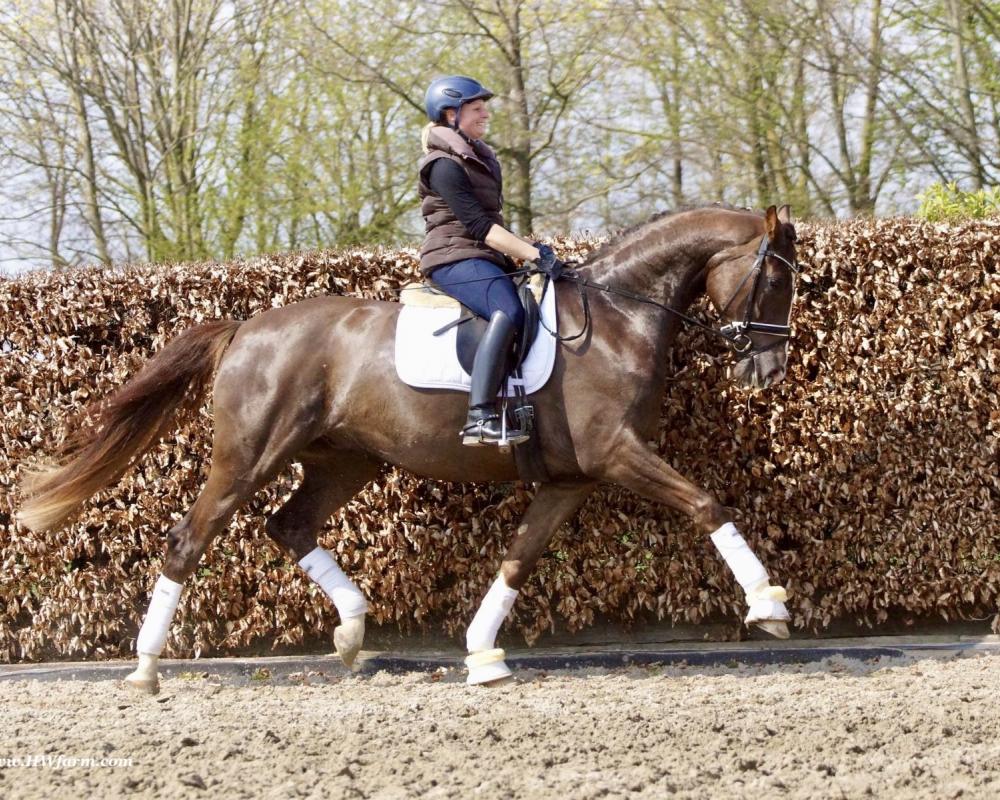 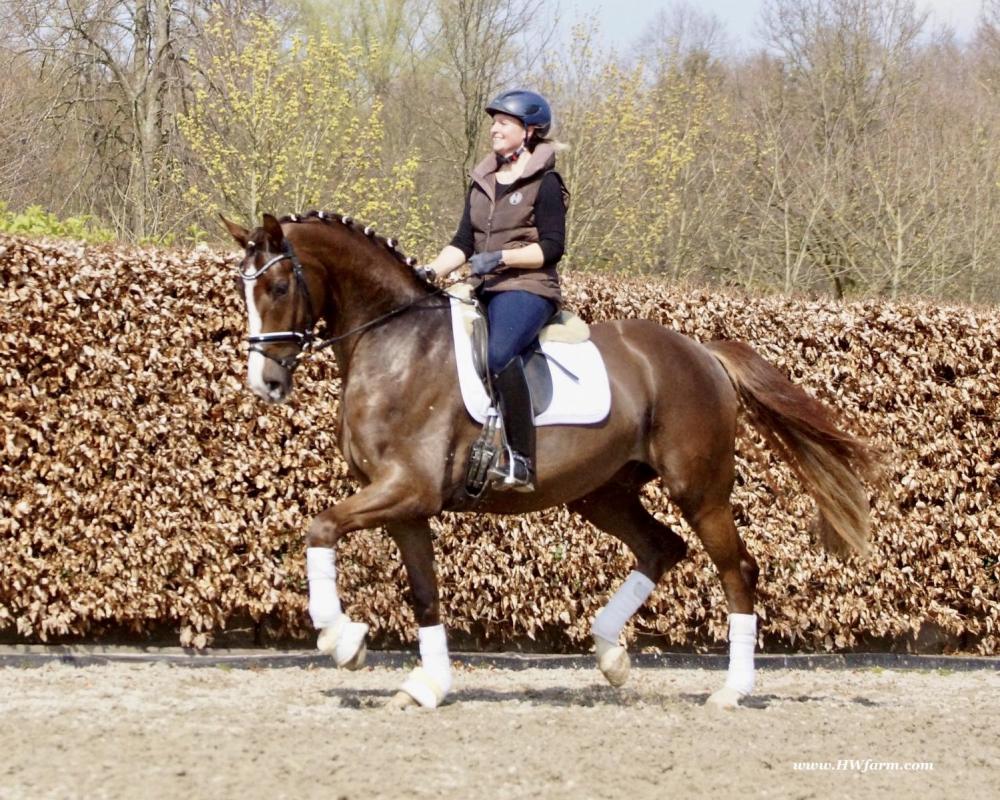 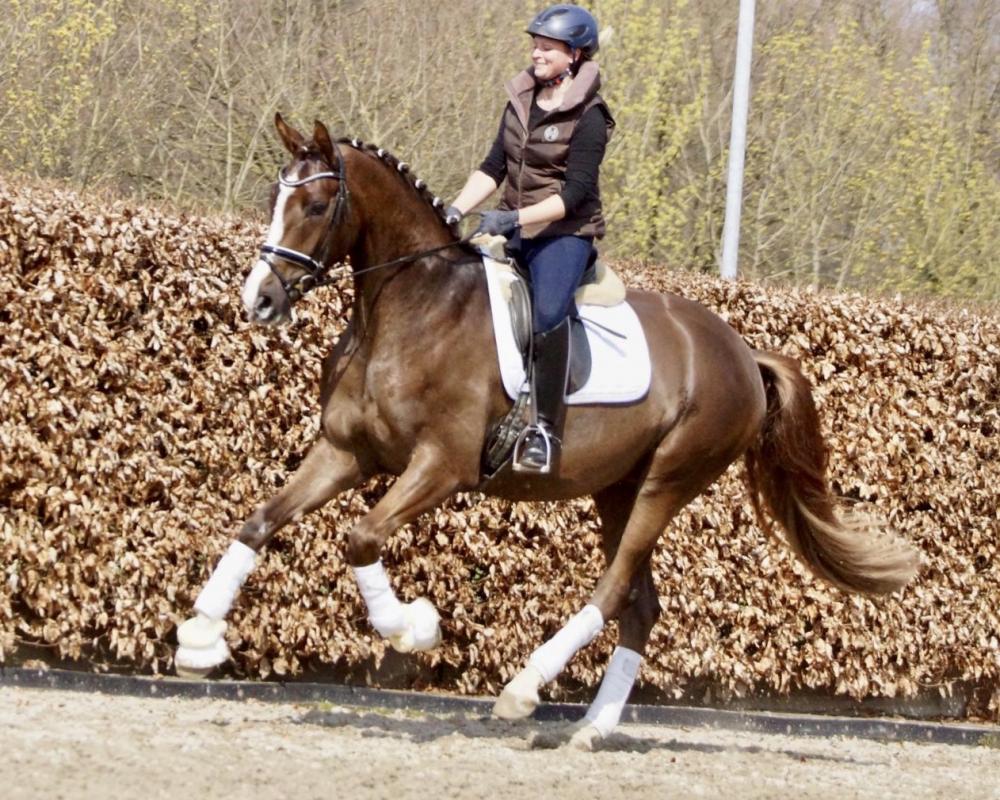 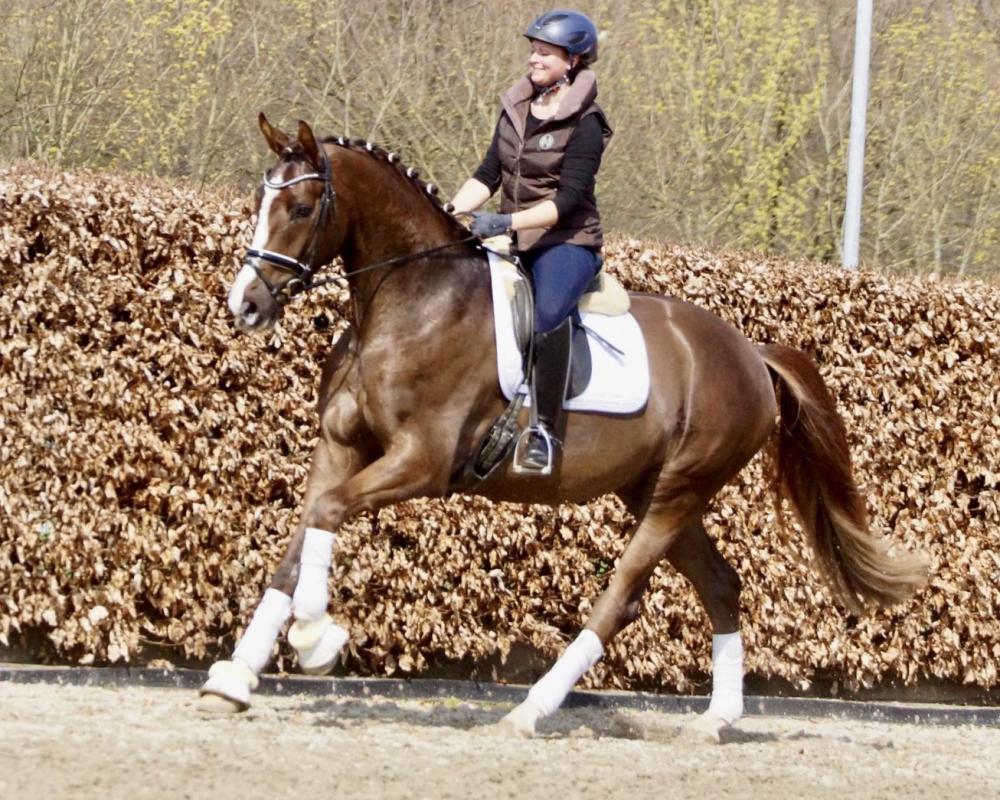 With his striking exterior and three fantastic gaits, this fabulous young stallion impressed the entire European equestrian world. His sire, De Niro, number one on the WBFSH dressage sire ranking list, has sired a number of licensed sons before Don Deluxe. The dam sire, Rosario, by legendary Rubinstein, was Premium Stallion in Vechta in 2001. He won his performance test, was nominated “Oldenburger Champion” two years in a row and “Vice-Bundes Champion” in Warendorf. In addition, he qualified for WCYH in Verden and in 2003, he was nominated “reserve champion” and later followed excellent results in S-dressage. In third generation, we find Feiner Stern, Champion stallion with exceptional trot capacity. The dam line includes the famous Egitta-line, counting numerous licensed stallions and highly prized mares as well as international competition horses. As a result, we have great expectations to Don Deluxe.

Fidermark's sire, Florestan was the champion of the 1988 Rhineland approvals and went on to win his 100 day test in Warendorf in 1989. Florestan has proven himself to be an ace of a sire. He is one of Germany's leading sires. His first few foal crops produced an amazing 20 licensed sons including the Bundeschampion Fidermark. His siring prowess is further enhanced by a number of State Premium Mares as well as several Bundeschampion winners and contestants including Farce (Vice Bundeschampion) Ferarra S Bundeschampion under Isabell Werth, Floriano etc... Successful dressage horses include Filou/Christoph Krueer and Fuego with Heiner Schiegren. The approved Focus is successful event horse with Heinrich Wilhelm-Johannsmann. Florestan has taken a leading position on the FN breeding values (ranking number I in 1999) for a number of years. His exceedingly ride able progeny have created a stir with top prices at the NRW elite auctions. Fidermark's dam Watonga was mated with Power to produce the Palegro, a further approved son, who represented Westphalia at the Bundeschampionship for Showjumping. The dam sire Werther has proven himself to be a successful sire of both dressage and showjumping horses. He has over 30 approved sons to his name and over 50 State Premium Mares proving to be an excellent transmitter of type. He is regularly ranked high on the FN breeding values for both dressage and jumping.

Fidermark was the vice champion of the NRW approvals in 1994 and won the Warendorf state stallion performance test with a big margin in 1995. Further successes followed in 1996. He dominated the "Optimum of Westphalian Riding Horses" sovereignty in Munster. He also became the Buneschampion in his home town of Warendorf. He then went on to win the LVM stallion championship in Munster Handorf. He has had many wins in the Prix St George and Intermediaire I under Marlies Van Baalen and he is trained by Johann Hinnemann. In 2003 he made his debut successfully at Grand Prix.

His first foal crops produced sensational foals. They dominated the Westphalian Foal shows and the NRW elite foal auctions. In 1998 his first approved son Fein Sinn won the 100 day test, the first of several including the impressive moving Furst Piccolo. He has over 15 licensed sons and many state premium mares to his credit already. He is a sire who will dominate German breeding for many years to come. He is ranked highly on the FN breeding values list.

Don Deluxe HW himself, is a stunning horse has all the personality a person could ever hope for, he's easy to ride and handle,
no wonder with these bloodlines!!!

Don Deluxe HW is already at second level,
with fluent counter canter and the flying changes will be easy for him.

This boy is far advanced in his training and he shows super nice extensions and
airtime. Check out his amazing hind leg, reaching far under his body and lifting it up in the air with ease. He just glides and barely touches the ground.
Ridden inside and outside, always giving 100%, no matter what he’s asked to do.

He loves to please his handler and rider, to learn new things is his hobby.
This sweet boy, enjoys to work eagerly under saddle.
All concentrated on his job in the dressage arena and with his quick hind leg, passage and piaffe will come naturally to him.

Don Deluxe HW is supple and elastic.
With his free shoulder and huge suspension,
he swings nicely through his back. He has a superb, rhythmic and clear walk with an amazing over-stride.
He is light in the bridle and easy to sit.
This extremely talented gentleman has a bright future ahead.

Very rideable, sane and trustworthy.
Don Deluxe HW loves his personal grooming time and puts his head right into your lap, striving for attention.
Perfect Junior or Amateur's horse, but with the quality for a professional as well! You just can't beat his personality.

This young star will go far in the dressage ring. You will be the star in FEI classes and at clinics.
His bloodlines are very much sought after.
He has the highly desired D (Donnerhall), F (Florestan) and R (Rubinstein) lines, all combined in one.

He is used to go in the hot walker,
loves his shower and solarium time.
Stands for the farrier, loads and appreciates grooming time.
Don Deluxe HW is as sweet as a puppy dog,
but with the attitude of a real gentleman.
You will love this dream horse, he's everything you could wish for and more.

All info and other horses for sale can be found at www.HWfarm.com