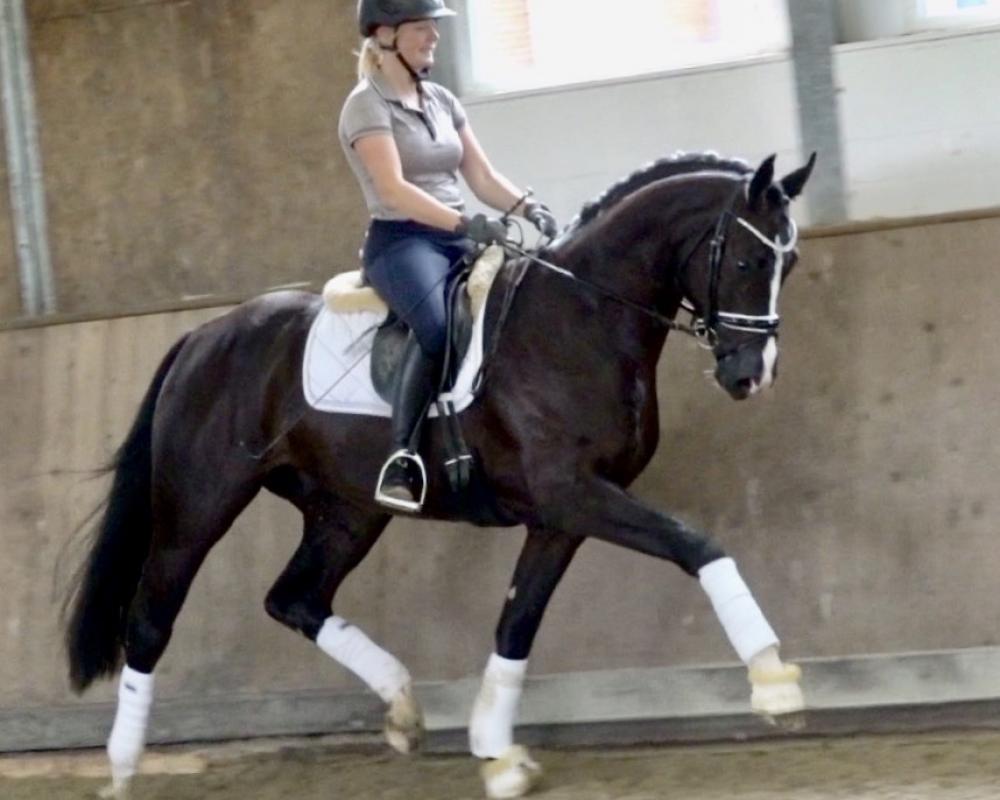 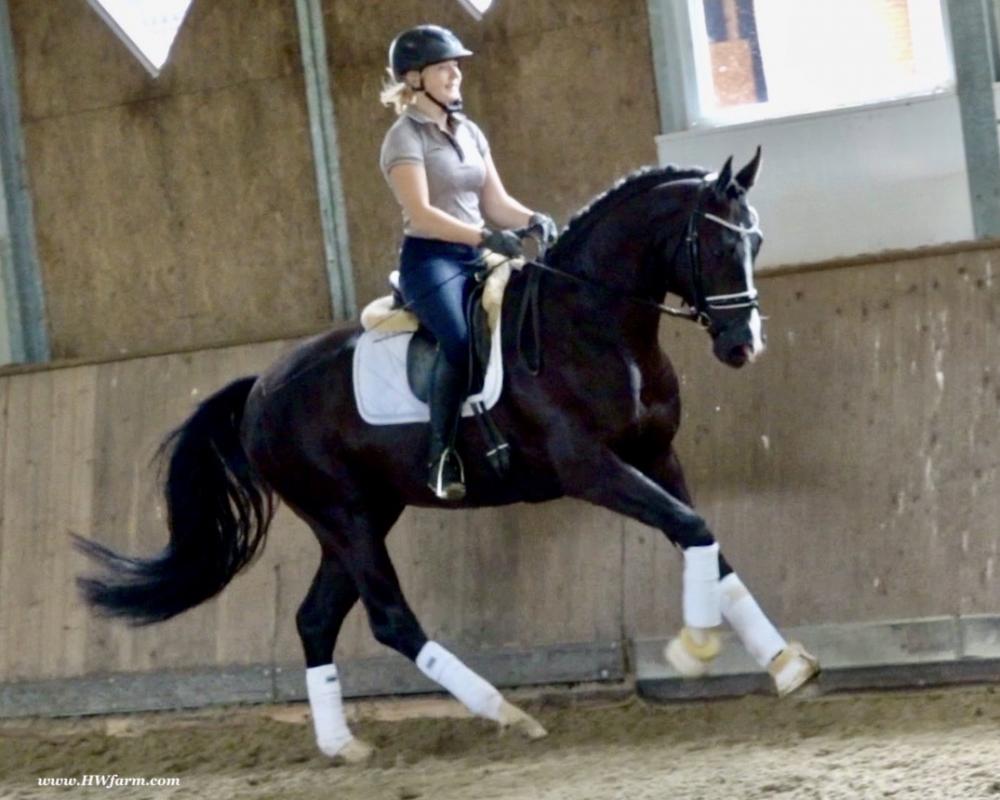 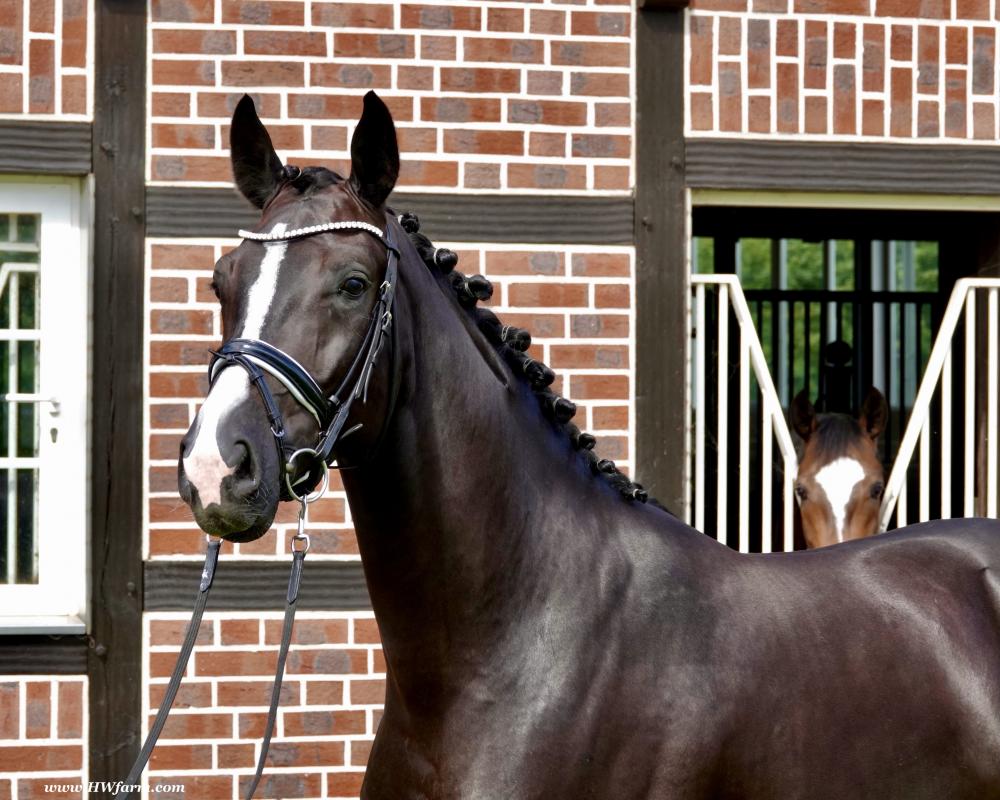 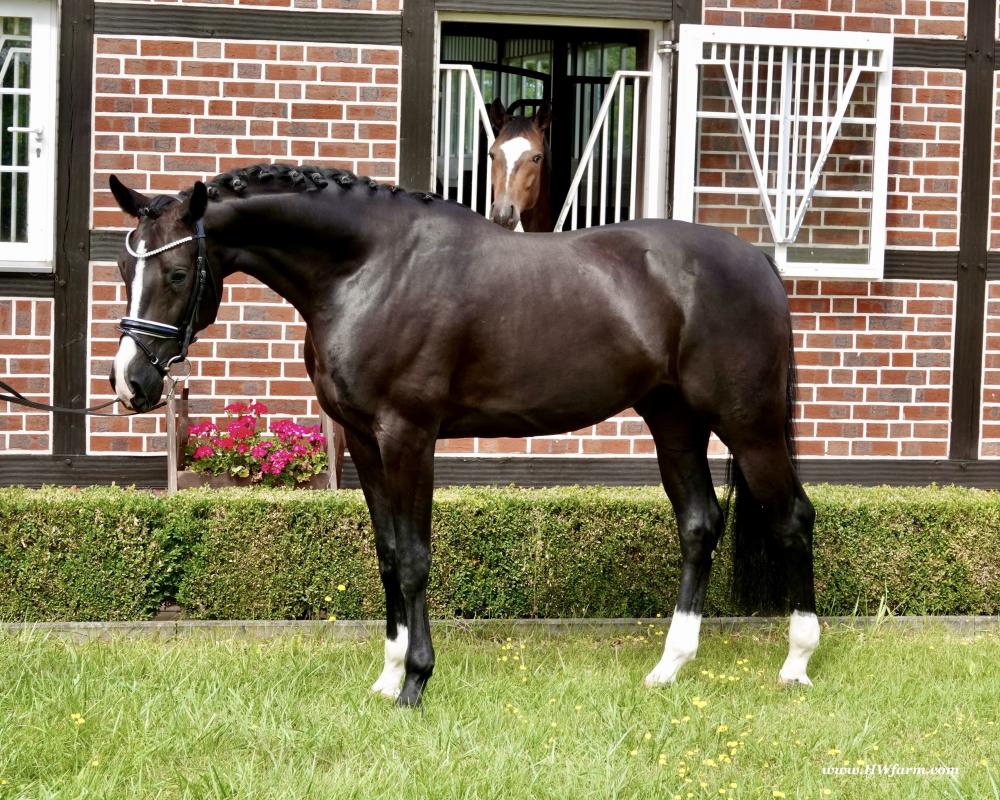 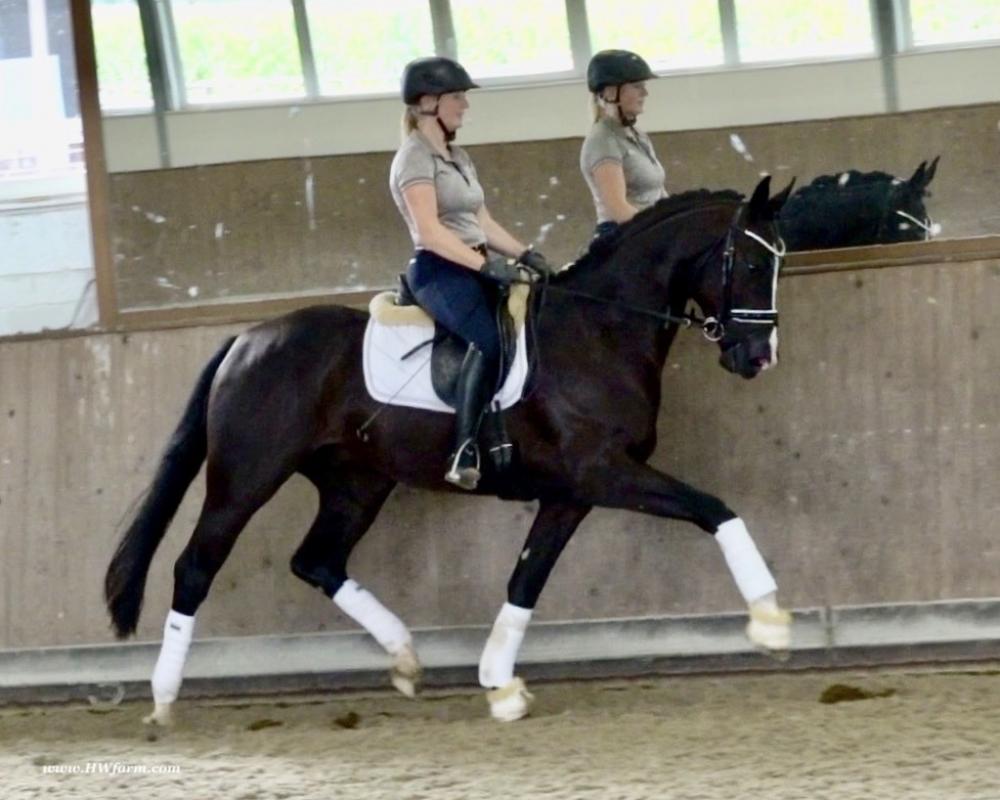 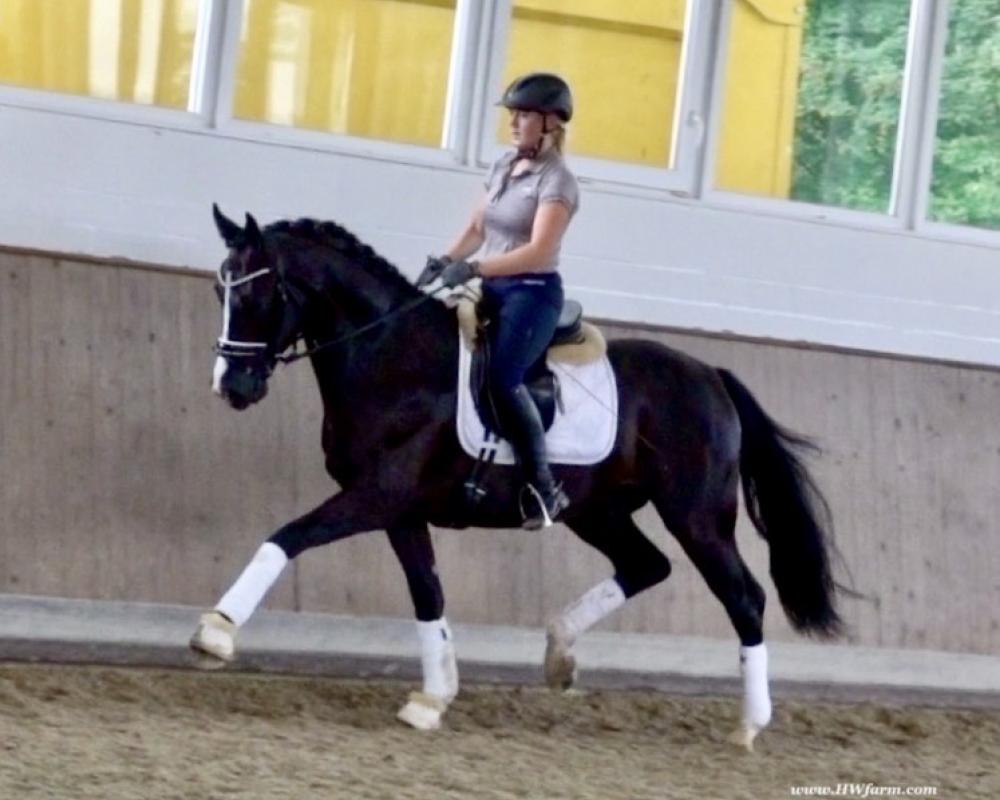 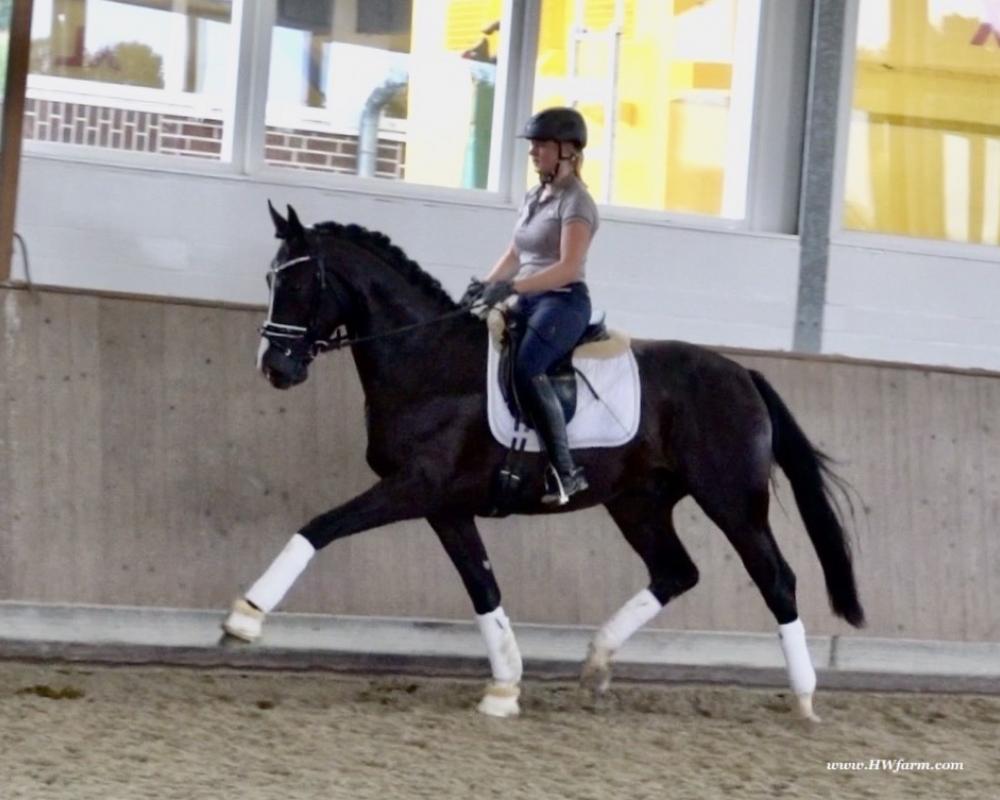 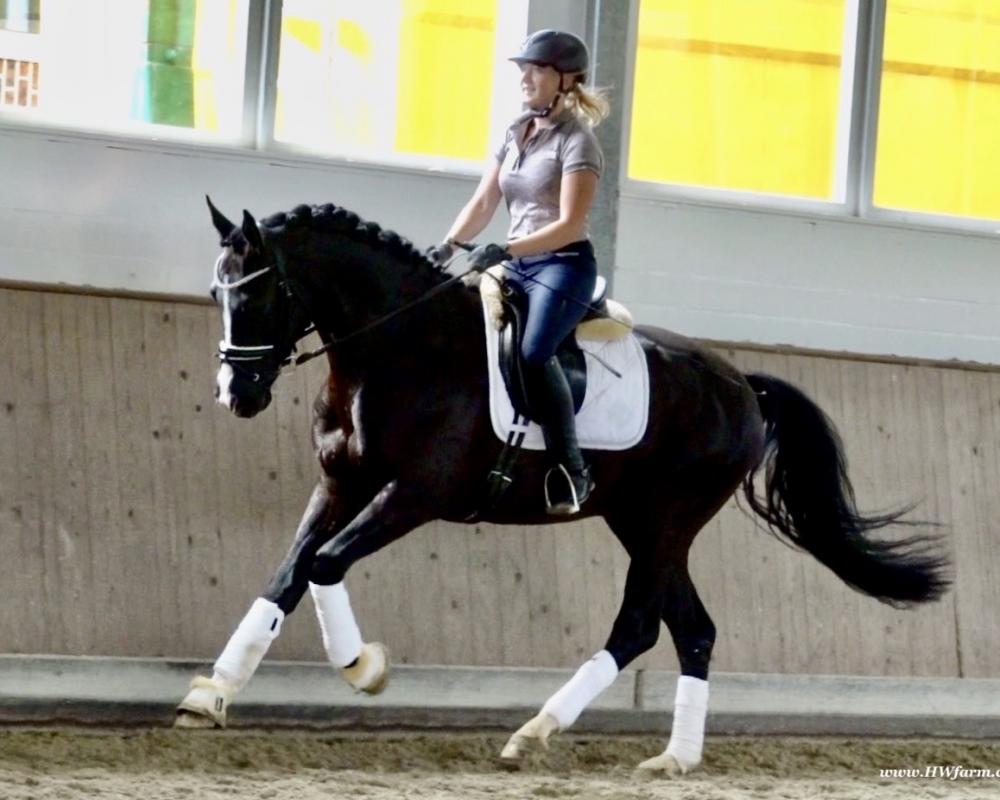 Don DiMaggio HW is by the famous stallion Don Nobless, a stallion who becomes a top choice due to his brilliant, charisma, and wonderful temperament.
He stamps is offspring with his beautiful Arabian like head. In addition to his beauty and excellent gaits, he has natural talent for collection,
which makes him a top international contender.
His career as a sport horse also makes him breeding stallion worthy.
He stood in the finals of the prestigious Nurnberger Burgpokal and in the Louidor-Cup for upcoming Grand Prix horses and finished in both classes in 3rd place. In 2017, in his first Grand Prix season he earned several wins and high placing to get selected for the Nations Cup in Rotterdam.
Special horses always have a special pedigree.
The Champion Dancier and the World Champion Don Davidoff both
originating back to the outstanding Donnerhall is represented twice in Don Nobless.
His grandmother Merci is the sister of Desperados grandmother Maskottchen. His progeny are also proving themselves very successful.
He has produced several champion mares, and multiple licensed stallions this past fall. He is currently continuing his international Grand Prix career under Susan Pape.

Since 2013, Dimaggio's offspring have reached the upper house of dressage. Half Moon Delphi ridden by Michael Eilberg was a member of the British European Championships bronze medal team in Herning, Denmark, and Headmore Delegate has been successful in the CDI's at Grand Prix.

Following Woodlander Farouche's incredible successes in 2011 and 2012 (Dimaggio as damsire), three offspring of Dimaggio placed in front at the 2013 World Championships for young dressage horses: Discovery OLD won the bronze medal, Duke of Britain placed fourth, Diamigo was ranked sixth. And in 2014, Del Magico ridden by Stephanie Dearing took home the silver medal for the 6 yr. old horses in Verden.

The success of Dimaggio's offspring in recent years comes as no surprise since this has now been happening for a long time now. Dimaggio's daughter, Cherie, was the 2001 World Champion of six year old dressage horses and hands down winner of the 2003 Nürnberg Burgpokal. Twenty of Dimaggio's sons have been licensed. Among them are the finalist of the Bundeschampionate, FS Demirel, the Premium Stallion and Oldenburg State Champion, Diamo Gold OLD, the second Oldenburg Reserve State Champion, Dylando, and the Austrian National Champion and competitor at the World Young Horse Championships, Bartlgut's Duccio.

Dimaggio's sire, Don Primero, was a 1990 Bundeschampion and was highly successful in international Grand Prix. Dimaggio's damsire, World Cup I, won his performance test, was the DLG Reserve Champion Stallion twice, received the "Hanoverian Stallion of the Year" award and sired numerous dressage horses such as Watussi, What Joy, Willi the Kid, Walamo, Water World and Vino Veritas. Through the half Thoroughbred stallions, Lindberg (by Der Löwe xx) and Emir in the following generations, the line goes back to the Dannenberg breeding area.

Dimaggio passed his performance test in 1999 in Neustadt/Dosse with a score of 133.39 (2nd place) in dressage, and proceeded to place 4th with the best at the Bundeschampionate before he left for England. After his arrival in England he immediately became the Young Horse Champion. In 2000 in Arnheim (NL) he became World Champion of five year old dressage horses, and in 2002 and 2003 under his rider, Suzanne Davis, Dimaggio won and placed in various tests up to Inter I.
During his breeding time in England, Dimaggio sired the 2003 British Warmblood Champion and the British Sport Horse Champion.

Dimaggio has also produced top selling auction horses. His licensed son, Di Magic, was the top priced horse at the 2011, 75th Jubilee Oldenburg Elite Auction in Vechta selling for 240,000 Euro. At the same auction, the chestnut gelding son, Discovery, sold for 95,000 Euro, and the Dimaggio daughter, Dezemberspitze, was the top priced horse at the following Oldenburg Winter Mixed Sales Auction going for the price of 100,000 Euro.

At the 2006 German Foal Championships, Dimaggio was the sire of the Reserve Champion Filly (dam by Fürst Heinrich), and his foals continue to be impressive and successful to this day.

Don Dimaggio HW, look at that beautiful black jacket with chrome!
He is a stunning horse who has all the personality a person could ever hope for,
easy to ride and handle, no wonder with these bloodlines!!!

Supple and elastic, with his free shoulder and huge suspension, he swings nicely through his back. He has a superb, rhythmic and clear walk with an
amazing over-stride, light in the bridle and easy to sit.
This extremely talented gentleman has a bright future ahead.

Don Dimaggio HW is so much fun, nice, uphill canter which will make the flying changes easy for him . Check out his amazing hind leg, reaching far under his body and lifting it up in the air with ease. He just glides and barely touches the ground, always giving 100%, no matter what he's asked to do.

This sweet boy, enjoys to work eagerly under saddle, all concentrated on his job in the dressage arena. Very rideable, sane and trustworthy.
Don Dimaggio HW loves his personal grooming time and puts his head right in your lap, striving for attention.

Perfect Junior or Amateur's horse, but with the quality for a professional as well!

You will be the star in FEI classes and at clinics.
His bloodlines are very much sought after.
He has multiple D’s, S and F line genes,
the stuff ride ability and dreams are made of.

He is used to go in the hot walker, loves his shower and solarium time.
Stands for the farrier, loads and appreciates grooming time.
Don Dimaggio HW is as sweet as a puppy dog, but with the attitude of a real
gentleman. Fulfill your dreams with all his sensational abilities, he will collect the ribbons with ease, high point and more, here we come.

Please find him and other horses for sale at www.HWfarm.com