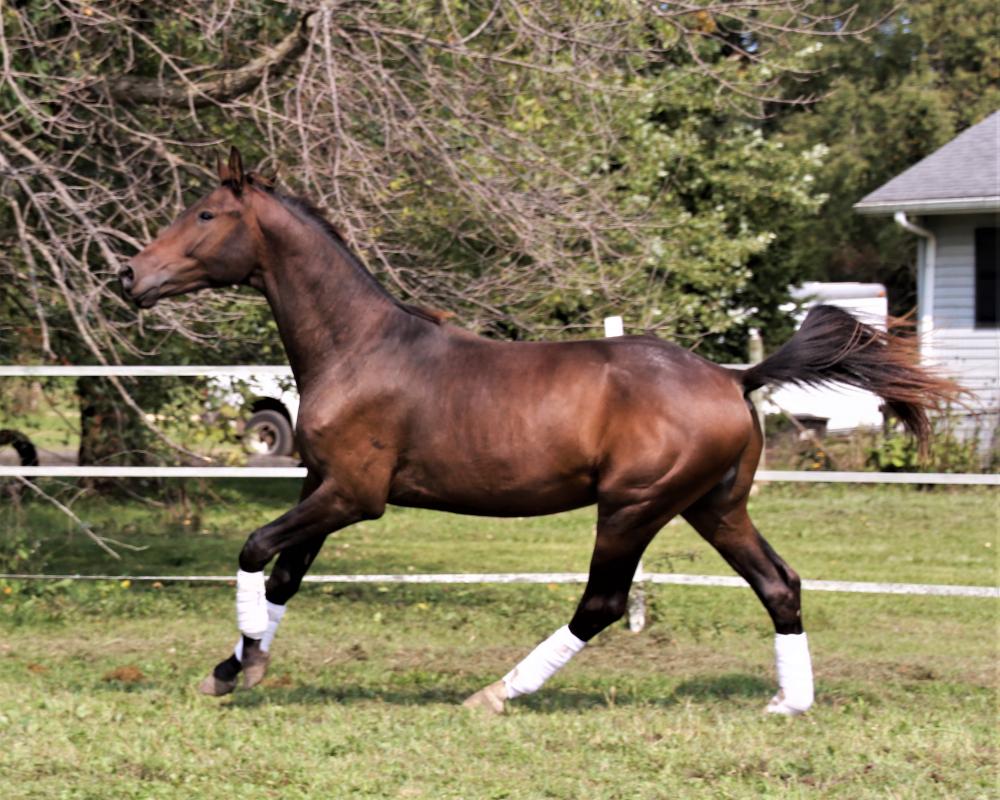 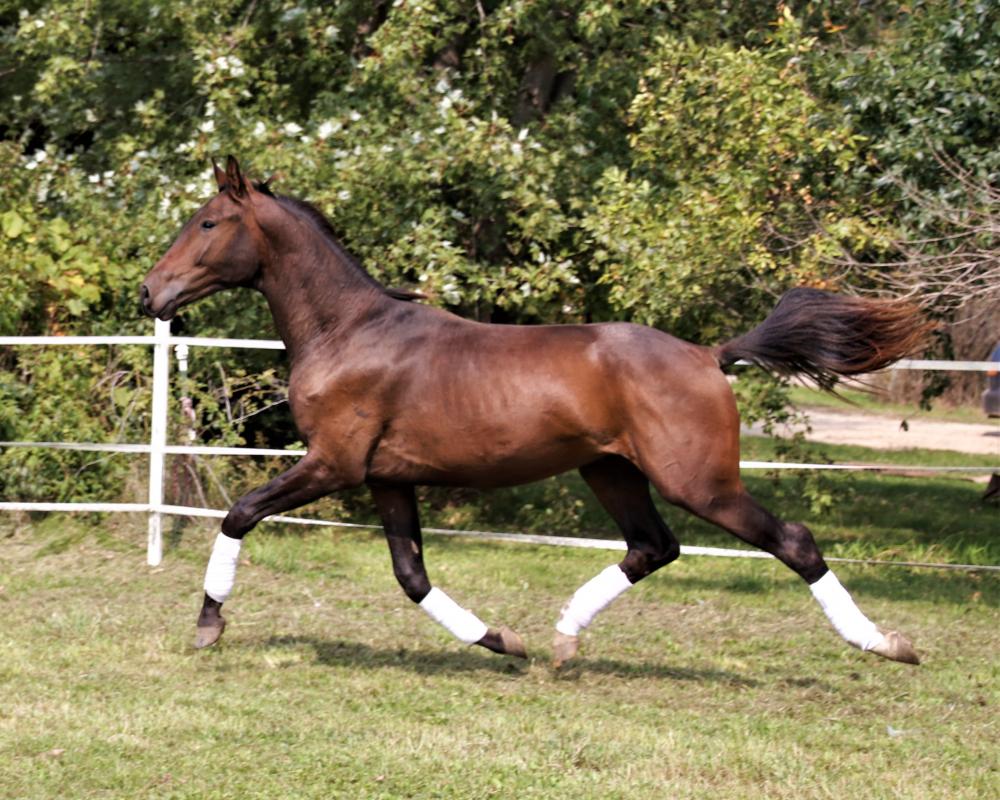 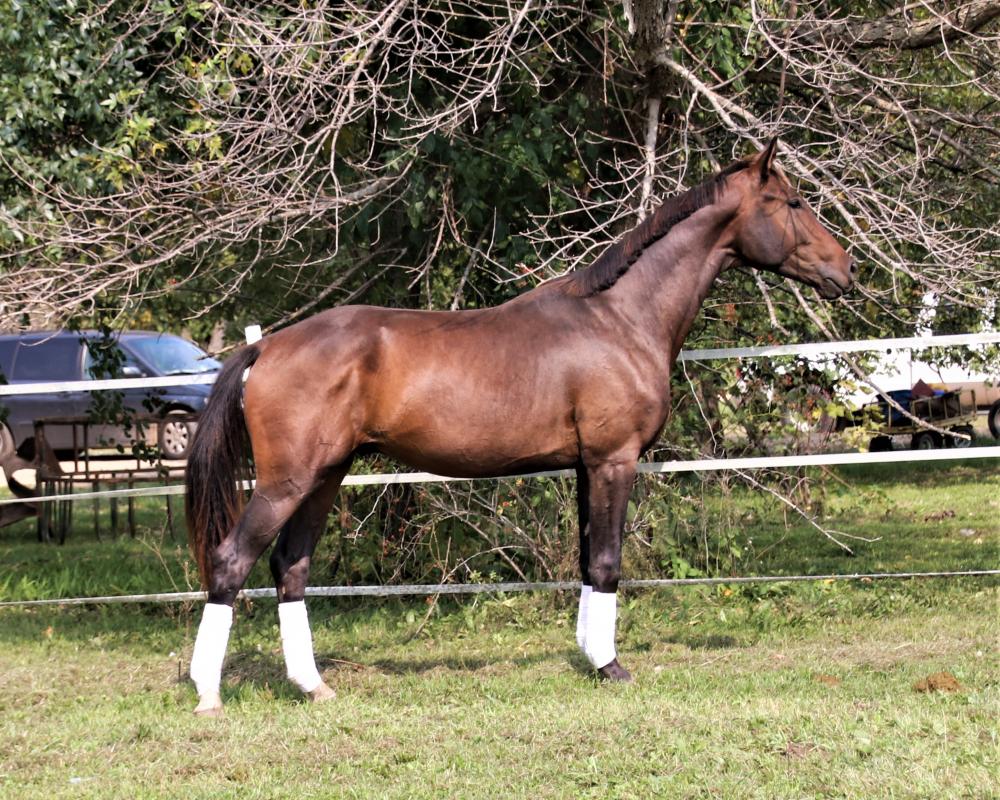 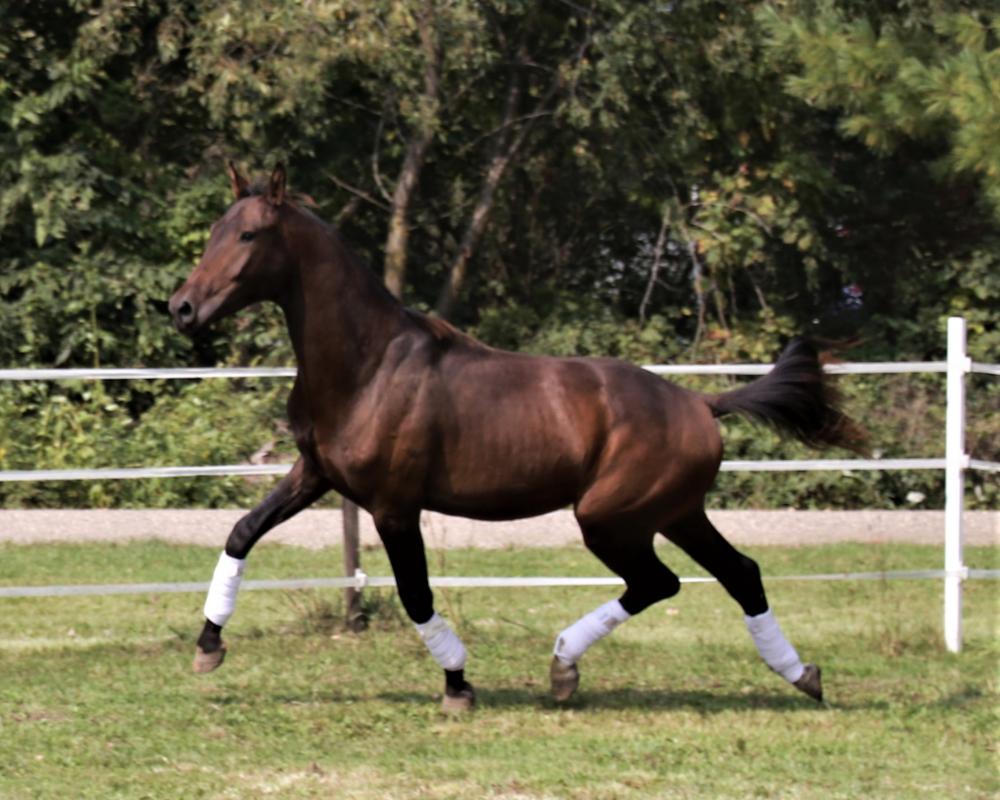 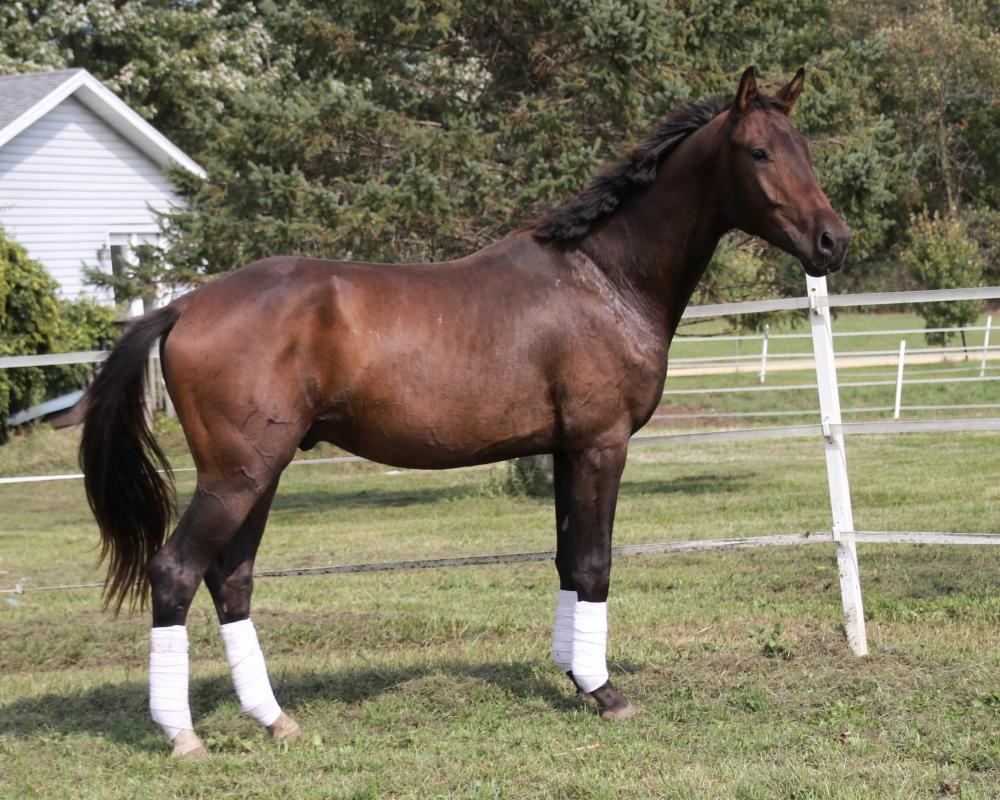 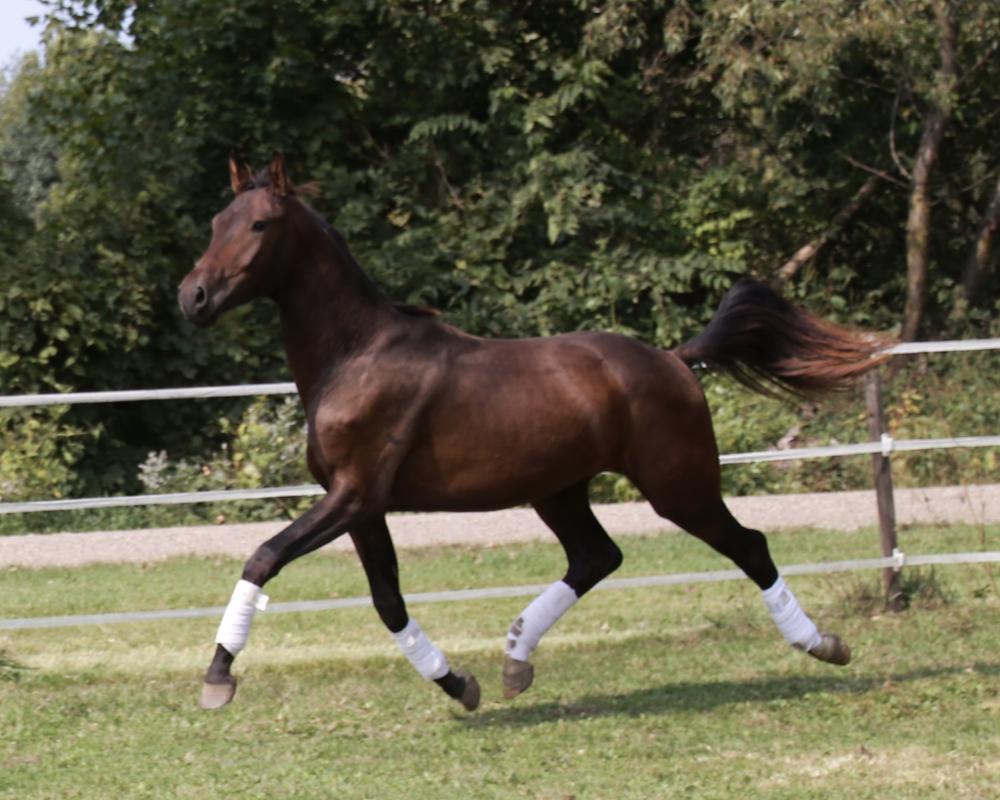 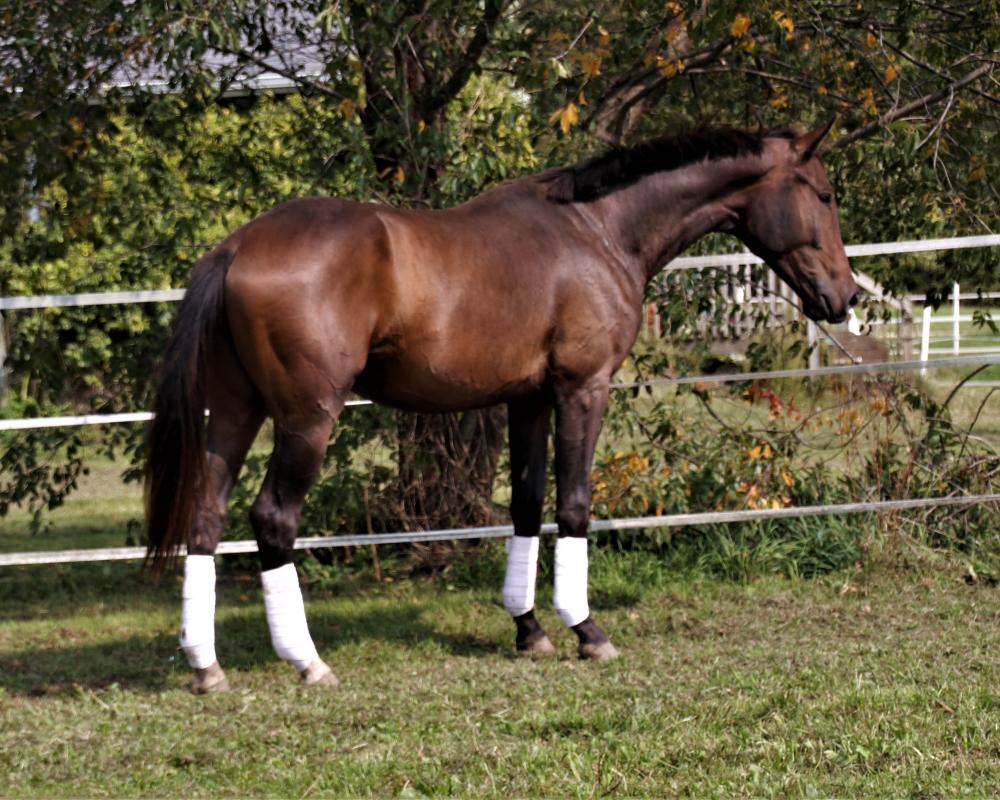 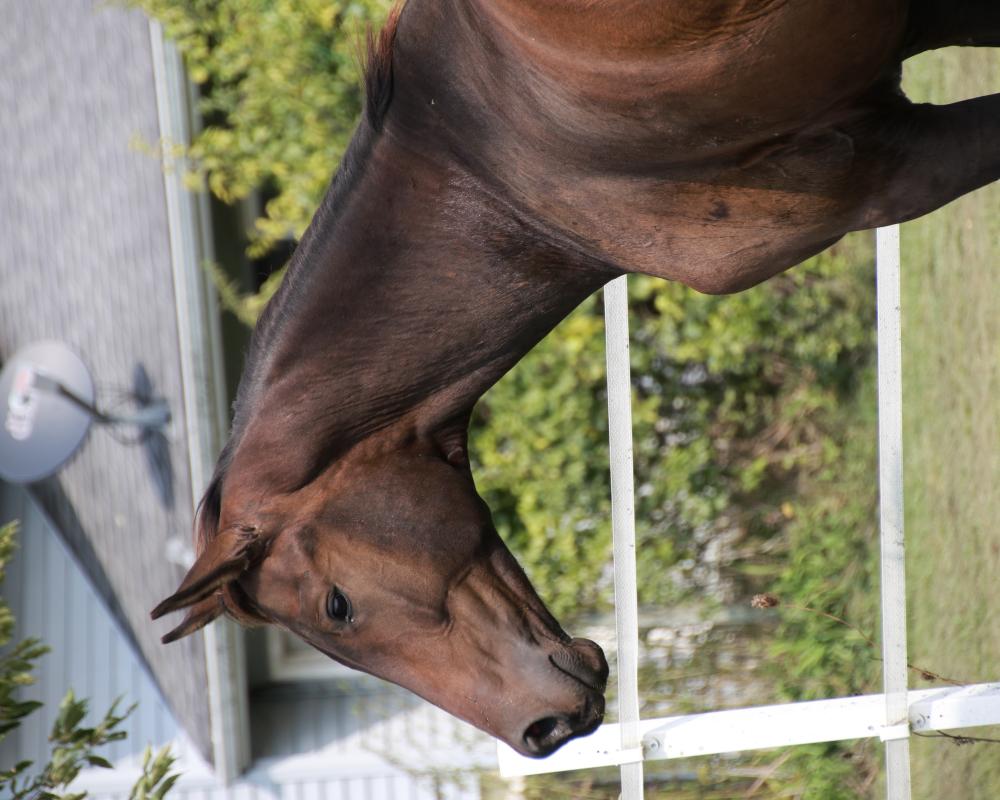 Its a COLT! lovely dark bay with two hinds socks. spitting image of his sire!

Foundation has an exceptional charisma, big movement with his hindquarters working perfectly under the center of gravity, admirable uphill canter and a superb temperment. In addition, he is gifted with a certain charisma only a few young stallions have.He finished his 30-day test in Schlieckau with excellent scores; two 10.0s for trot and canter in the final test, 9.5 each for character and willingness to perform as well as 9.25 for rideabiltiy: Foundation finished his test with an average score of 9.13 for inner values, 9.57 for trot and canter. In 2013, after many wins in L level dressage classes, he qualified for the German National Championships in Warendorf.

Foundation's true moment of international breakthrough came in 2016 when, with rider Matthias Alexander Rath, he consistently placed and won Prix St. George and Intermediate I level. He was awarded with the main premium la of stallions with an emphasis on dressage in Vechta. His first offspring are frequently victorious in ridden and dressage horse competitions and he has already sired numerous highly placed German nation champion finalists.

Looking like a true copy of his sire Fidertanz, who was striking NRW champion stallion and successful up to Intermediare I tests, Foundation originates from the athletic, highly successful dam line of Paninka, producer of Isabell Werth's multiple Grand Prix winner Apache, Olympic horse Escapado/Carl Hester and Hans Peter Minderhoud, the Inter I horses Lucky Luke, Wivara, Wocelli, Adolfo FRH and Cheyenne, who were both successful in three-stars competitions, and several others. Granddam Weniga presented the 17-time advanced level test winner Queeny, who competed successfully in the short Grand Prix with Victoria Michalke, and the Prix St. Georges winner Lord/Kathleen Keller.

Dam, Elite Eligible Delia is by noteworthy stallion Dauphin a direct son of Donnerhall. Dauphin is known for producing fabulous temperaments, correct foundations and ability for the upper levels. Delias dam, EM Wiota, was top mare of her inspection and third in the country for her mare performance test. EM Wiota has produced 5 Elite daughters and 1 stallion son!

Breeder of quality warmblood prospects and show horses for both the Amateur and professional. Great care is taken in handling and starting each young horse so that they can move onto their new homes with confidence. We breed Oldenburgs, Hanoverians, Westfalen and Reinland Pfals Saar horses for both hunter/jumpers and dressage
Email Seller Now
Visit Seller Website
More Horses From Seller