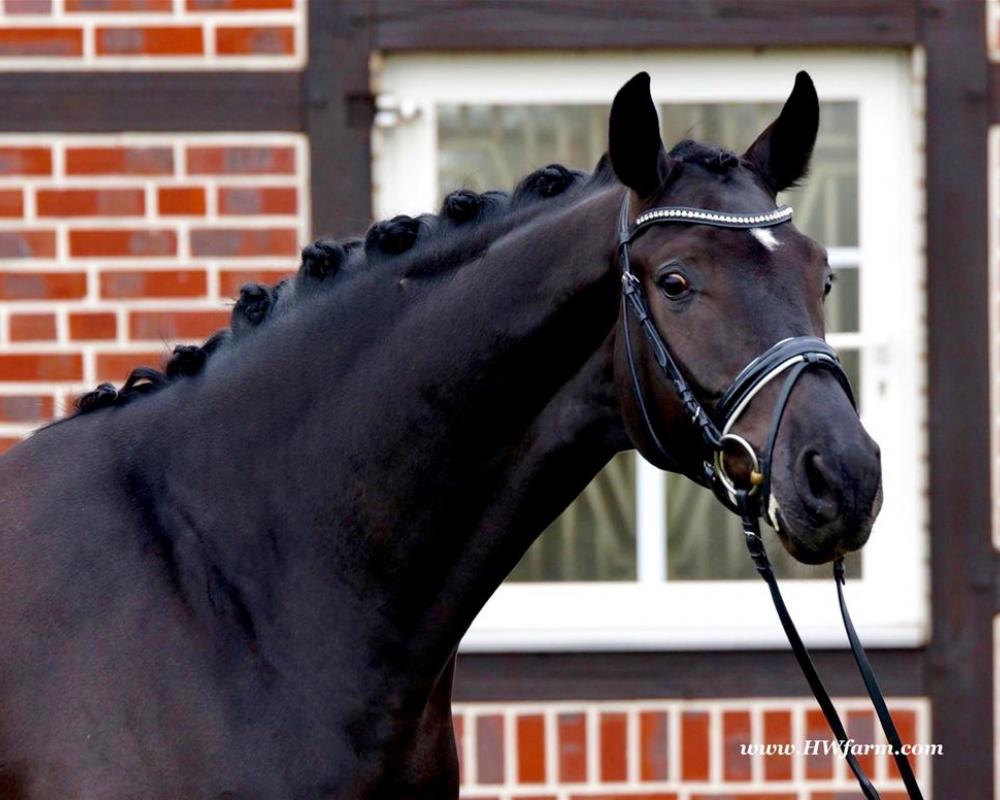 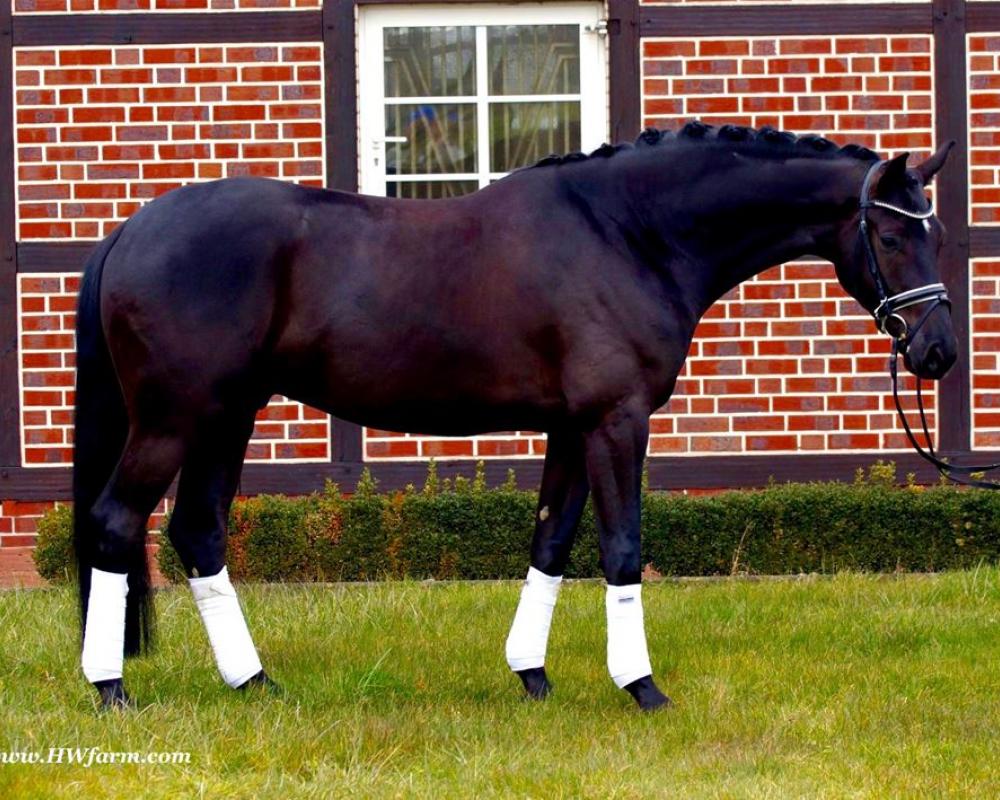 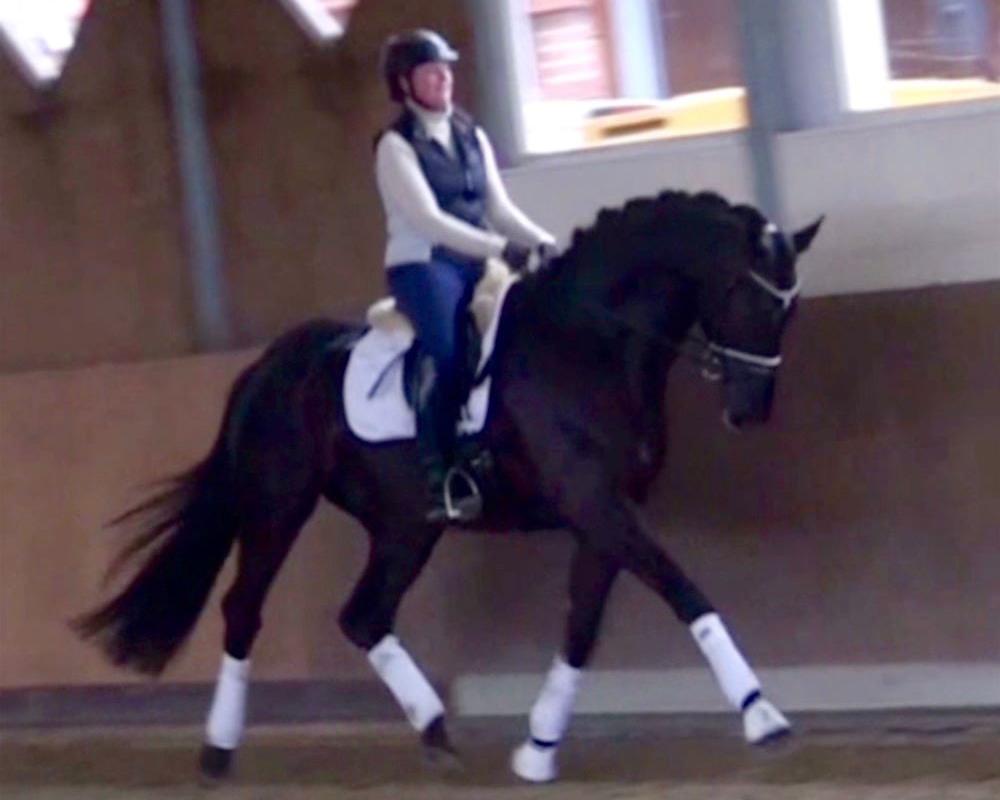 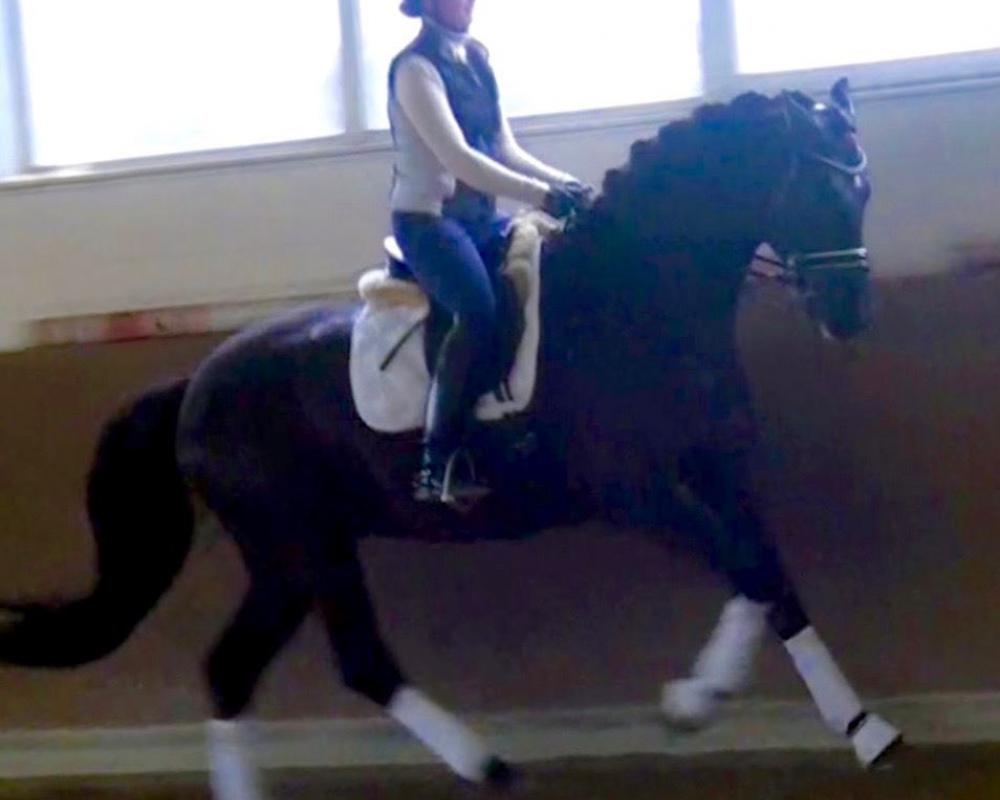 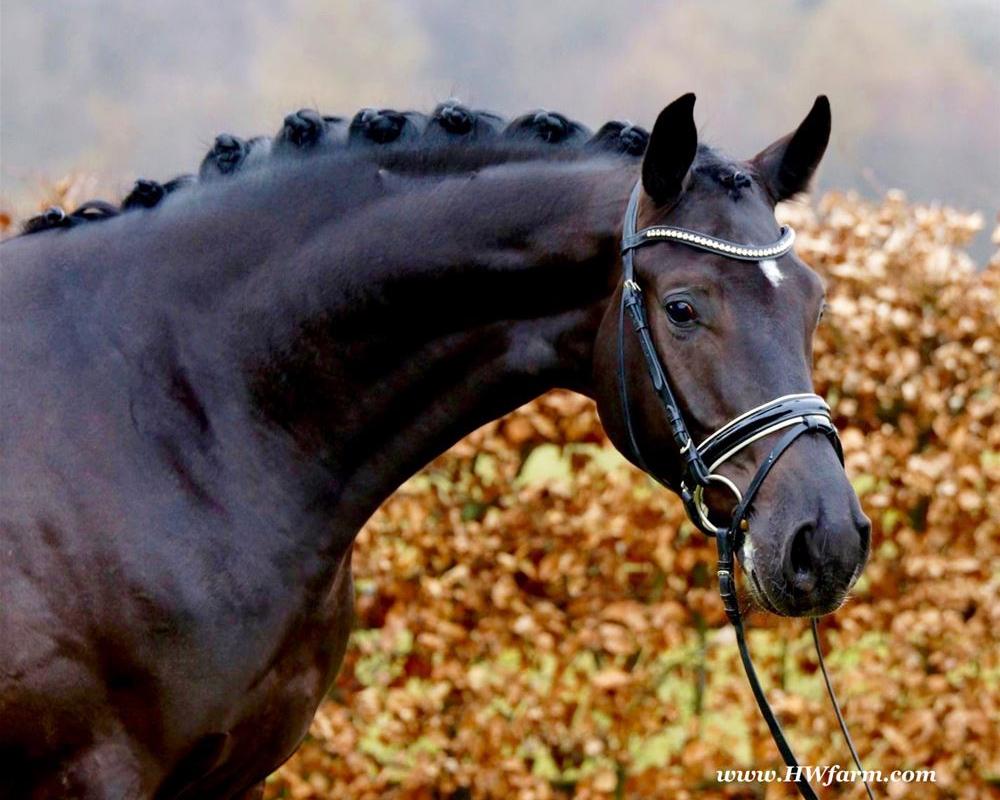 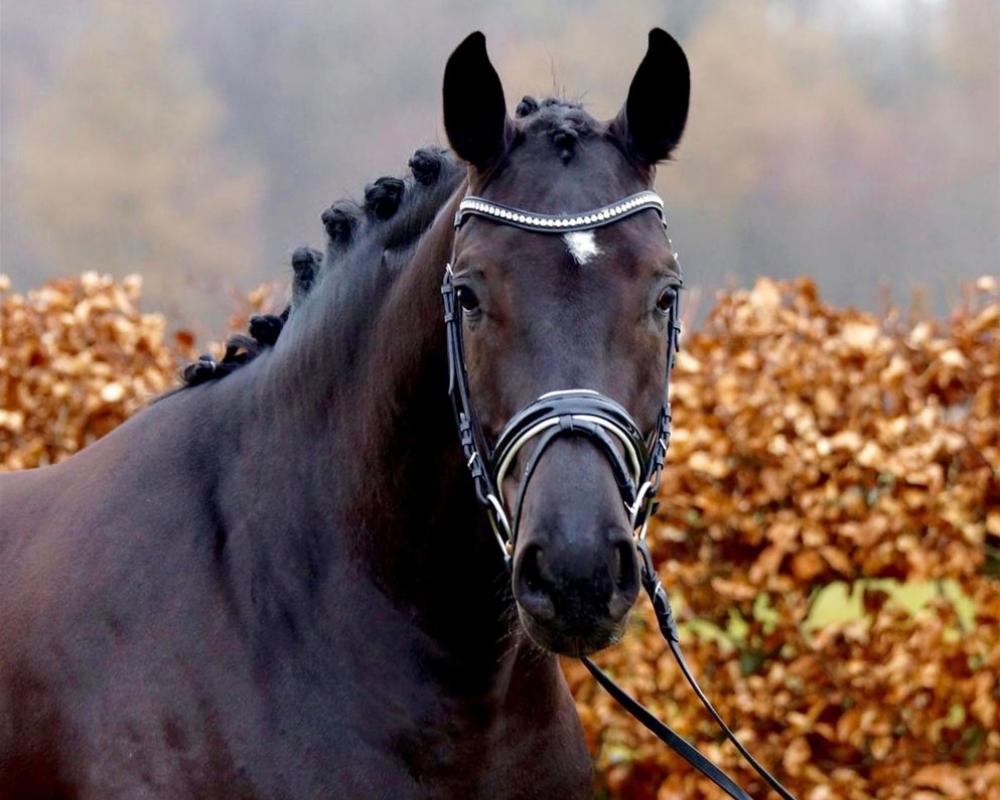 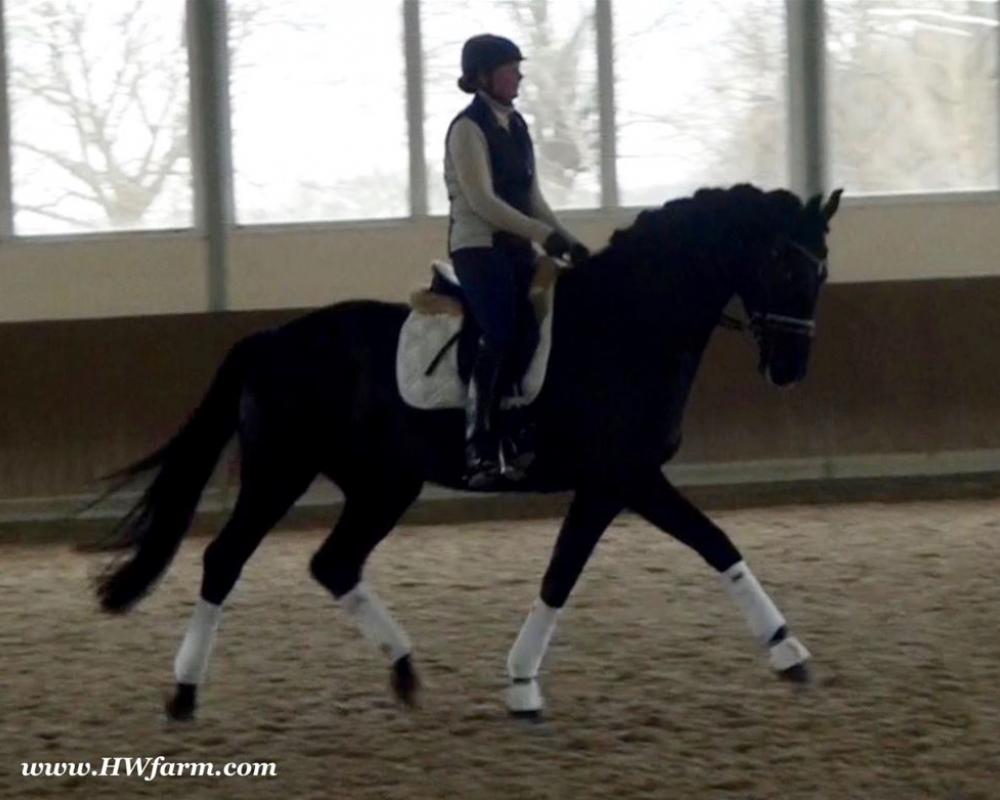 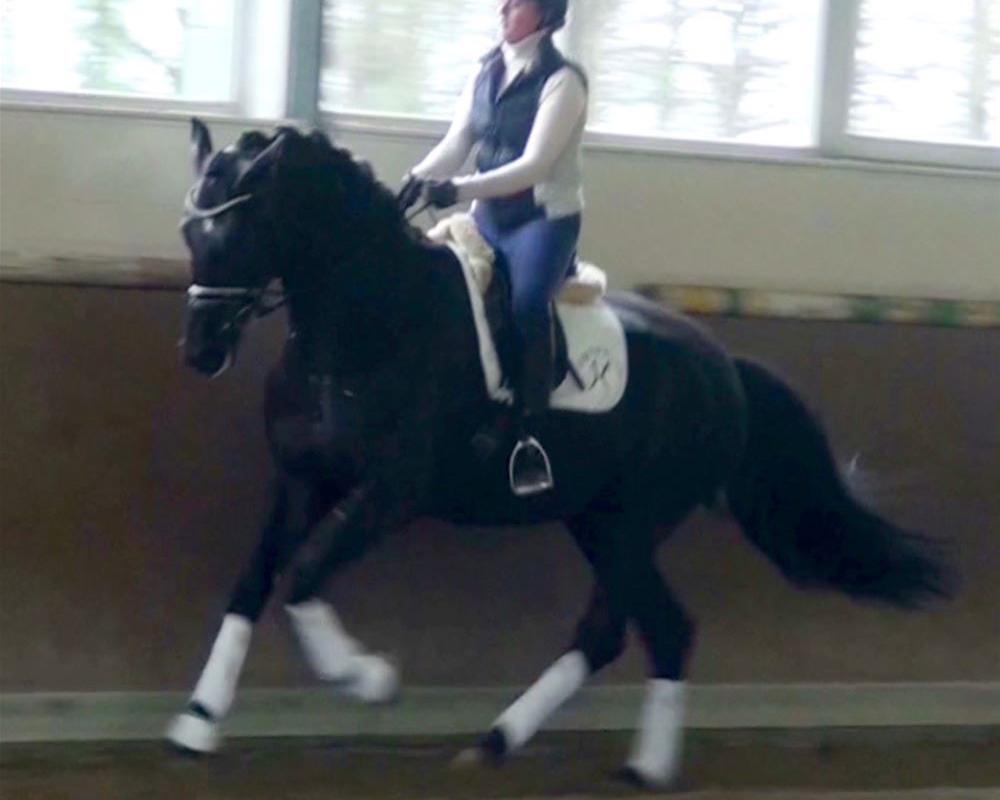 Francis HW has an amazing gene pool, his sire is Fürst Nymphenburg, the celebrated reserve champion of the licensing in Verden in 2007, who then became the dressage and overall winner of his stallion performance test in Adelheidsdorf one year later. "Fürst Nymphenburg - a prince with perfect character and dreamlike movements."

As the celebrated reserve champion of the licensing in Verden in 2007 he became the dressage and overall winner of his stallion performance test in Adelheidsdorf one year later.

He was carefully brought up to the difficult class of dressage by his rider Tessa Frank. This perfect couple can be credited with many victories, placements and titles. In 2004 they brilliantly won the qualifiers for the Nürnberger Burg Pokal.

In addition to his impressive performance you can also find many successful descendants of Fürst Nymphenburg: licensed sons, state premium mares and successful sport horses can be found as well as many auction horses.

The great-great grandsire of Fürst Nymphenburg, Furioso, arrived at Station Vorwerk in Cappeln in 1968 and was an immediate success. For years his offspring dominated the German competition and prize money statistics. Interestingly, the sire line of Furioso II delivers both dressage and jumping horses - especially interesting since the common belief is that French horses are no good for dressage. Furioso's best known jumping stallions are his sons, For Pleasure and Voltaire, in dressage there is his son, Purioso and his grand-son, Florestan I. Currently one of the more striking heirs of the Furioso II line is the Hanoverian stallion Fürst Nymphenburg, bred from a Thoroughbred line and a son of the double World Champion and elite sire Florencio I.

There is depth in the pedigree - De Niro, currently the most prominent dressage sire, can be found on the dam line, and in third generation there is Argentinus, another who delivered both dressage and jumping horses. The dam line leads to one of the main branches of the Thoroughbred family 16. This family produced important stallions such as Aberglaube xx (Oldenburg), Amerigo Vespucci xx (Celle), Atatürk xx (Neustadt-Dosse) and Aufwind xx (Rhineland-Pfalz).

Fürst Nymphenburg was reserve champion at the Hanoverian licensing in Verden in 2007. In the 2008 competition season he won several riding horse classes with scores of up to 8.7 and qualified for the Bundeschampionate. In the autumn of 2007 he won his stallion performance test in Adelheidsdorf, with the highest dressage index of 147.23 points. According to the Hanoverian Stallion Book 2015, he has won four dressage classes at S level with his trainer Tessa Frank, for winnings of €4,356. As of the 2015 book, he had produced 97 competition horses, all of them dressage horses, for earnings of €10,532.

Fürst Nymphenburg commenced stud duties at Hadeln/Oberndorf in 2008 and was immediately one of the most popular stallions in Hanover. He produced successful foal crops, including numerous foal show and championship winners as well as the top-priced lots at auction. Since 2013 Fürst Nymphenburg I has been standing at Aller-Weser in Verden. Five of Fürst Nymphenburg's sons have been licensed, including a black stallion from his first crop (2009), Fool's Paradise (Wolkentanz I-Thronfolger), who has already won riding and young dressage horse competitions, and Fürst Wallerstein (Walt Disney I/Lemon xx), licensed in 2013 and competing successfully under the banner of the State Stud in Celle. Fürst Nymphenburg's other sons include First Row (Hitchcock/Matcho AA), Fürst Weedern (Rotspon/Matcho AA) and Fürstenstern (Sterntänzer/Donnerschlag), who was sold to the USA following the 2012 southern German saddle licensing.

So far 122 daughters of Fürst Nymphenburg have been registered, of which 60, received the state premium tag and several of these were victorious at mare shows - a high success rate.

Francis HW's grand sire Florencio is, in type and movement, a clear winner.

10.0 points for the canter, 9.8 for the walk, 9.7 for the trot, 9.6 for the suppleness, and 9.9 points for the overall impression. Astronomical results for a stallion which seems to be from a different sphere: Florencio wins the World Championship of the 5-year-old dressage horses. With the total score of 9.80, the dark bay Westphalian under his Dutch rider Hans Peter Minderhoud established a new championship record.

Already during the qualification round Florencio proofed his exceptional quality. Un-impressed with the downpours and the heavy ground of the test arena, he won confidently achieving 9.8 points each for the trot and for the canter, 9.5 for the walk as well as for the suppleness, and 9.7 for the overall impression which added up to a total score of 9.66. In the final test, the sire from Ludwig Kathmann's stallion station in Vechta-Holtrup did his role as the favorite candidate justice. Despite the strong wind which was blowing in the stadium in Verden, the young stallion concentrated exemplarily on the aids of his rider. The expressive trot, the picture-perfect canter as well as the rhythmic, ground-covering and calm walk impressed both the audience and the judges. The comment of judge Jenny Loriston-Clark from Great Britain brought it to the point: "What a wonderful horse."

Last year Florencio won the Westphalian Championship under Simon Drop, and at the German Championship in Warendorf he became vice-champion of the 4-year-old stallions.

Susanne Sanal from Kamen bred the Florestan I-son Florencio out of Walessa by Weltmeyer - Pik Bube I. Florencio was approved by the Oldenburg breeding association. Six of the foals from his first foal age class have been admitted so far for the 3rd Elite Foal Auction in Vechta on the 20th August 2004 at the Oldenburg Horse Centre in Vechta. He debuted as a sire at the 60th Oldenburg Elite Auction in April 2004: At that event a Florencio-son was sold for 10,000 Euros to Great Britain.

Florencio is undoubtedly a great gain for the dressage breeding. His unbelievable beauty in conjunction with his natural light, uphill movements makes him a revelation to every dressage lover. Florencio is a stallion who is bred for dressage from the cream of the crop of stud stallions in Westphalia and Hanoverian studbooks. He carries with him all the blood and expression necessary for dressage breeding.

Breeding His sire Florestan I is the outstanding dressage ambassador of the Westphalian stud-book. Florestan I has several approved sons such as Fidermark, Fleurop, Fuerst Heinrich, Faveur, Flores, Freestyle and Flieder. Florencio's grandsire Weltmeyer is one of the most famous stud stallions in Hannover with countless approved sons and off-spring in the dressage sport. He has sired over 88 graded sons. His 'Hall of Fame' features outstanding sons like Wall Street, Weltburger, Wee Weltmeyer, Weserperle S, Wesley, Wolkenkranz and the full brothers Welt Hit I 0, II, III, IV, V, and six VI. Weltmeyer's sire World Cup I, full brother to White Foot's sire World Cup III, sired sixteen graded stallions including Walt Disney I, Walt Disney II, and Warkant. His international dressage portfolio includes Welcome, Without A Doubt, Watusi, and Walzerkoenig. Progeny have accumulated winnings in excess of £310,000. Further into Florencio's pedigree we also encounter the famous dressage progenitor Pik Bube . Pik Bube , was a very successful dressage stallion and a top sire of breeding, dressage and sport horses including 30 graded sons of which International competitors Pikant, Plaisir d'Amour 002, Paddy and Pik Primaire are some of the most successful. All in all, the dressage genes are firmly anchored in Florencio.

Florencio completed his performance testing Zweibrucken and earned a monstrous score for all the dressage elements. Character:8.5, Walk:10, Trot: 8.2, Canter: 9.2, Rittigkeit:9.5, Jumping 7.8 . In 2003, Florencio was very successful under Simon Dropp. Florencio was Reserve Champion of the whole of Germany in the prestigious' Bundeschampionat 2003'. Furthermore he was overall Champion of the four year olds in Westphalia . Florencio performed fantastically with Hans Peter Minderhoud in the stallion competitions 2003 with high places Zuidbroek, Wert and Goes.

He was the sovereign winner of the stallion performance test in 1998, scoring an excellent 148.82 points in the dressage category. Like his father, Rotspon is a very impressive horse with a great rideability, outstanding movements and a high ability for dressage. He also has a good jumping technique which is highly above average. He is an elegantly made sire in a noble black coat with a lot of expression and appearance. The first offspring of Rotspon were born in the year 2000. The foals have beautiful heads and a good conformation (long sloping shoulder, long well set up neck). They are equipped with a very elastic trot and a ground covering walk, and have been very much in demand. At the prestigious Ratje Niebuhr-Show of 2002, Rotspon was the second most successful sire represented, with only his first crop. Both the two and three year old classes were won by his daughters, with the two year old becoming the youngest champion in the show's history. Rotspon has begun creating his own branch of the Rubinstein I dynasty with many approved sons and daughters, as well as high-priced auction horses and stellar performance horses.

What an amazing pedigree, all around.

Beautiful doesn't even start to describe the looks of this young star. Francis HW has a chiseled, fancy small head, stellar stallion neck (he is a gelding) and the body to match. He's a super model and will steal your heart in no time.

Francis HW's has superb "Grundschwung", his suspension is marvelous. He has a very good rhythm, balance and truly works his heart out, every single time.

Very reliable, sweet, easy, suitable for AA, YR and/or Professional as well. He is light in the bridle, easy to sit and everybody can ride him.

Part of his phenomenal heritage are the best competition genes possible, good, old, very strong dam and sire lines, a near guarantee for success. His pedigree reads like the Who's Who.

The very active hind leg pushes him up, supports lift of the whole body and will be the ideal start for a good piaffe and passage, just check how far he reaches under, his canter is lofty and uphill, amazing trot combined with a clean, reaching walk, outstanding quality movement all around.

This special boy, just floats above the ground, with his great temperament, sweet character, he will climb up the levels with ease and fun. All exercises come naturally to him, as he has the built, movement and athleticism to do it all. This extremely talented gentleman has international potential.

Francis HW will put a spell on you, with his soft eyes and in no time, you'll be in love with one of the prettiest horses available. The judges will love him due to his expression and "show me" attitude, take him to shows and collect your ribbons. Show him off at clinics and get yourself noticed, he looks so much like his famous sire and grand as well as grand grand sires. This boy will enable you to fulfill your dreams with all his sensational abilities, he will collect all ribbons with ease, high point and more, here we come.

The goal of HW Farm is, to raise highly talented young horses in Germany for riders in the USA and all over the world.

This young star will go far in the dressage ring, he is your ticket to the top!

Terms
Please go to www.HWfarm.com to see all info, pics, price, video as well as other hand selected, top quality horses for sale.