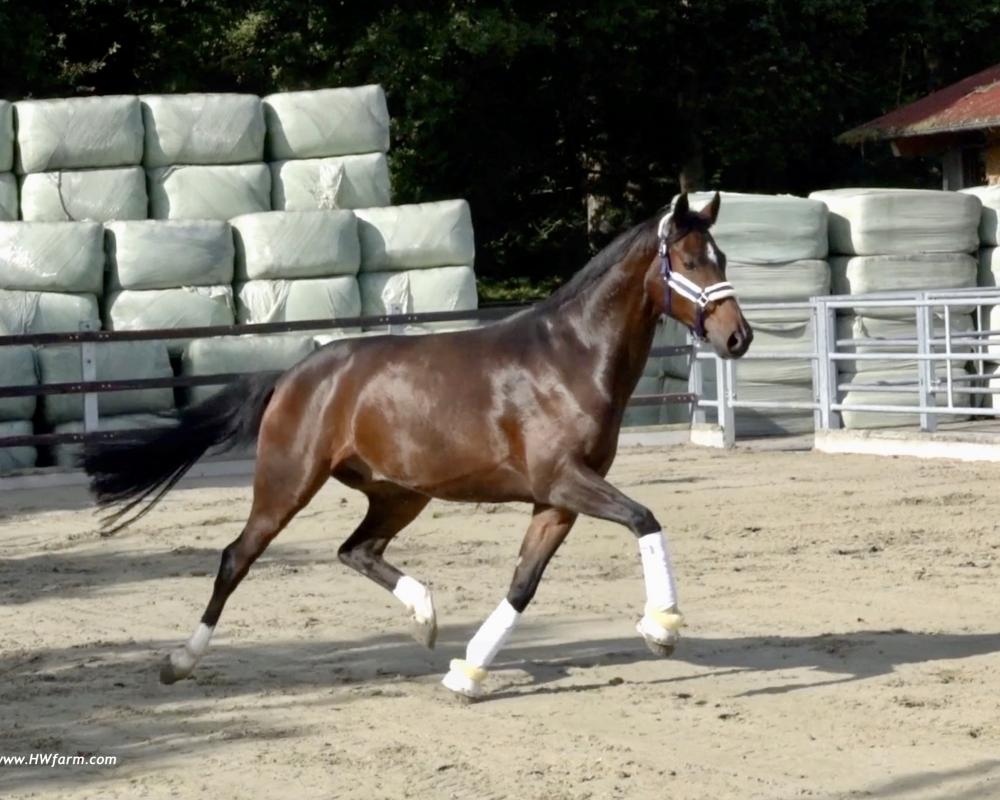 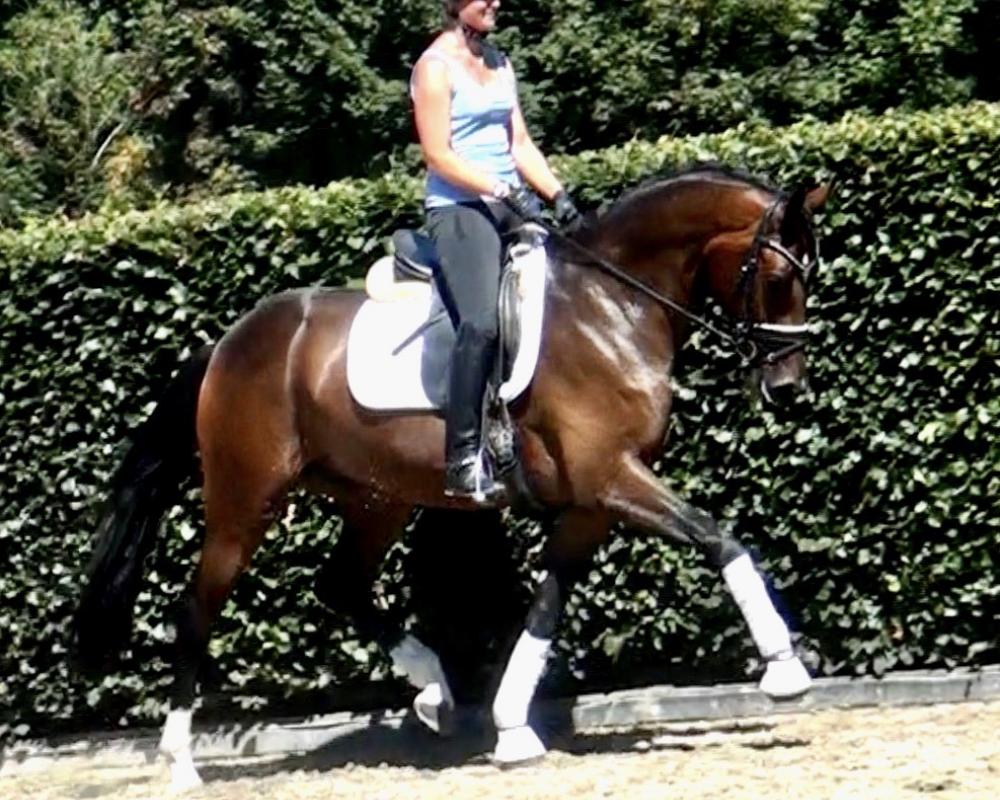 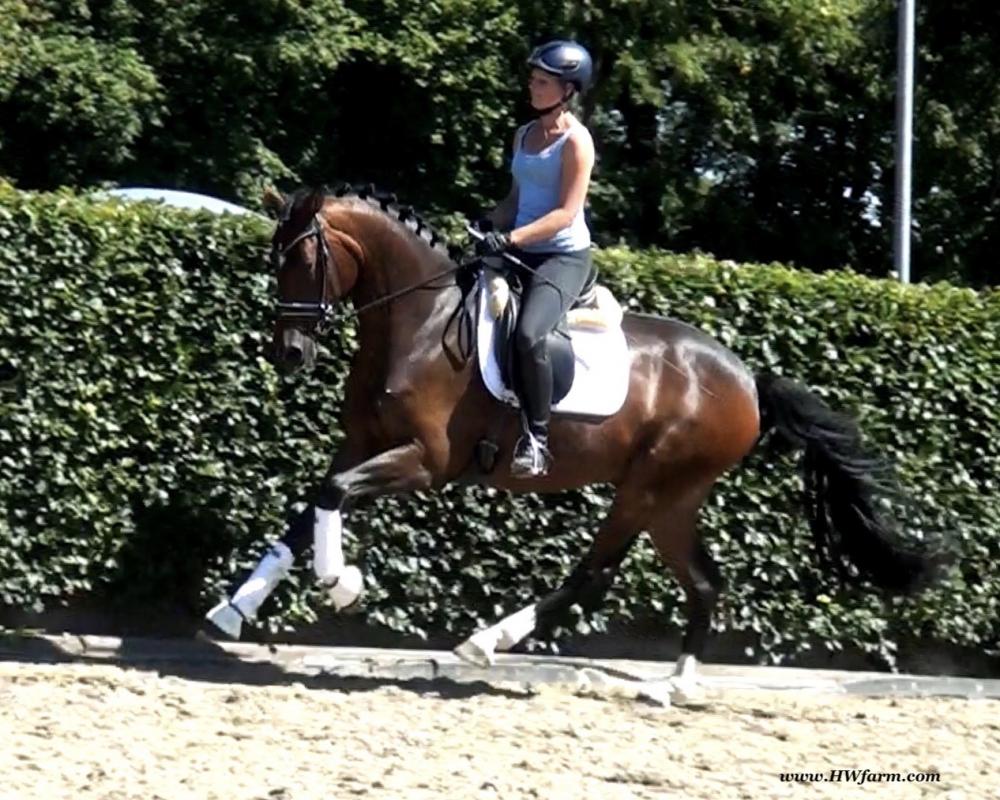 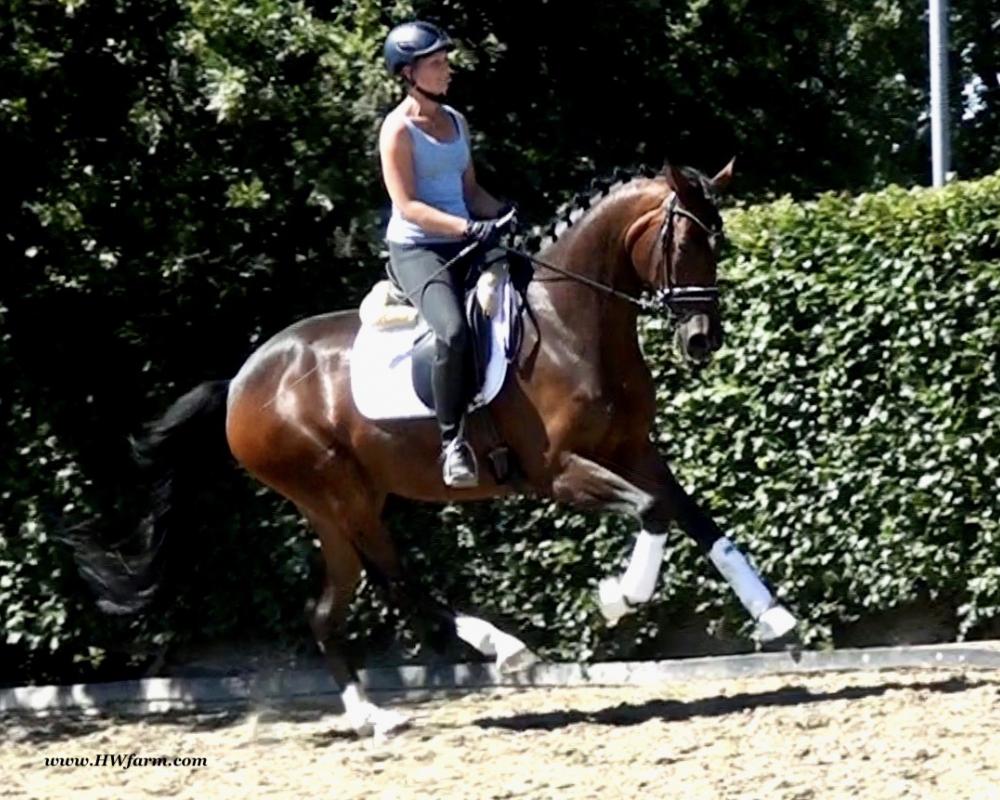 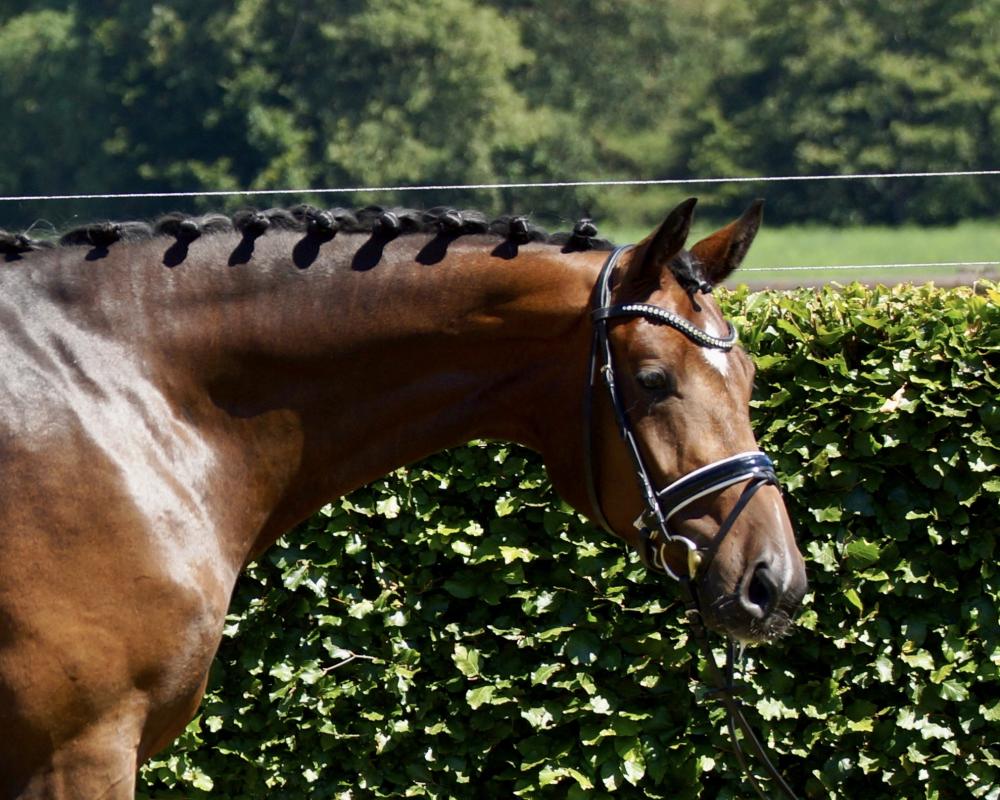 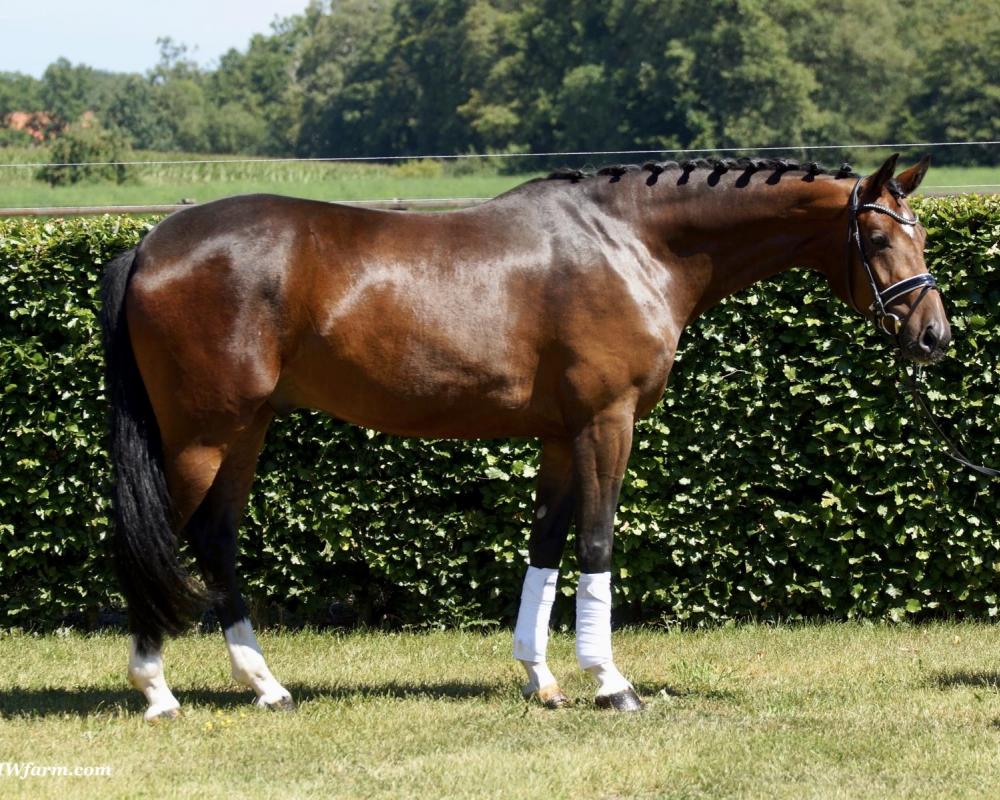 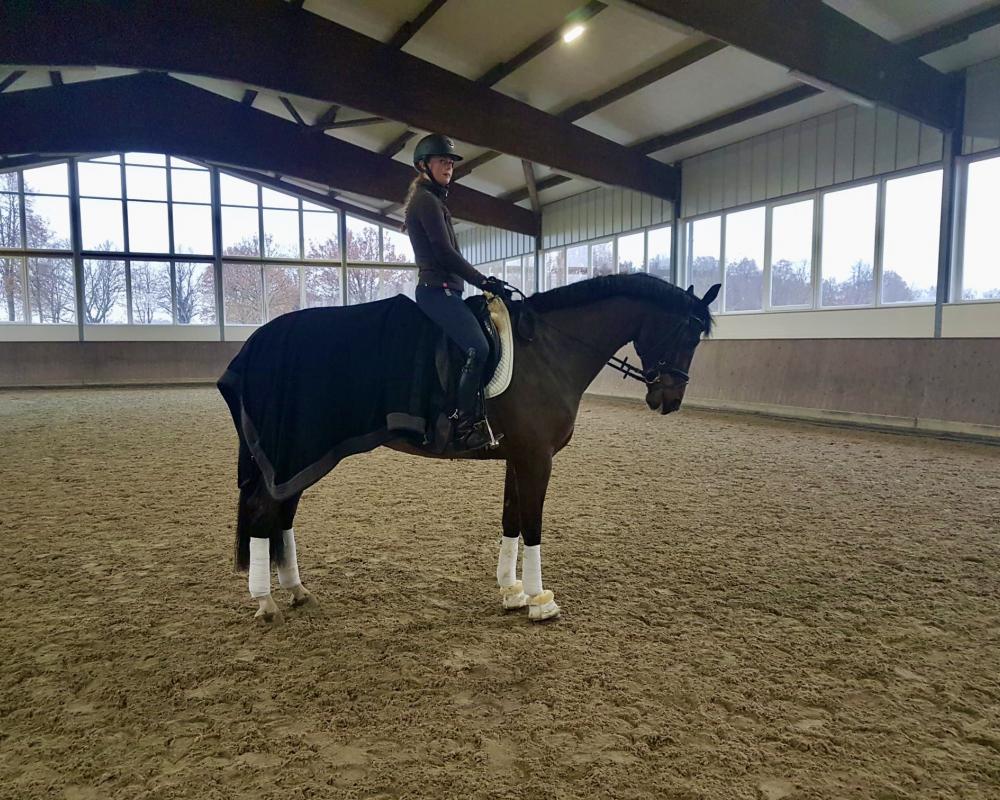 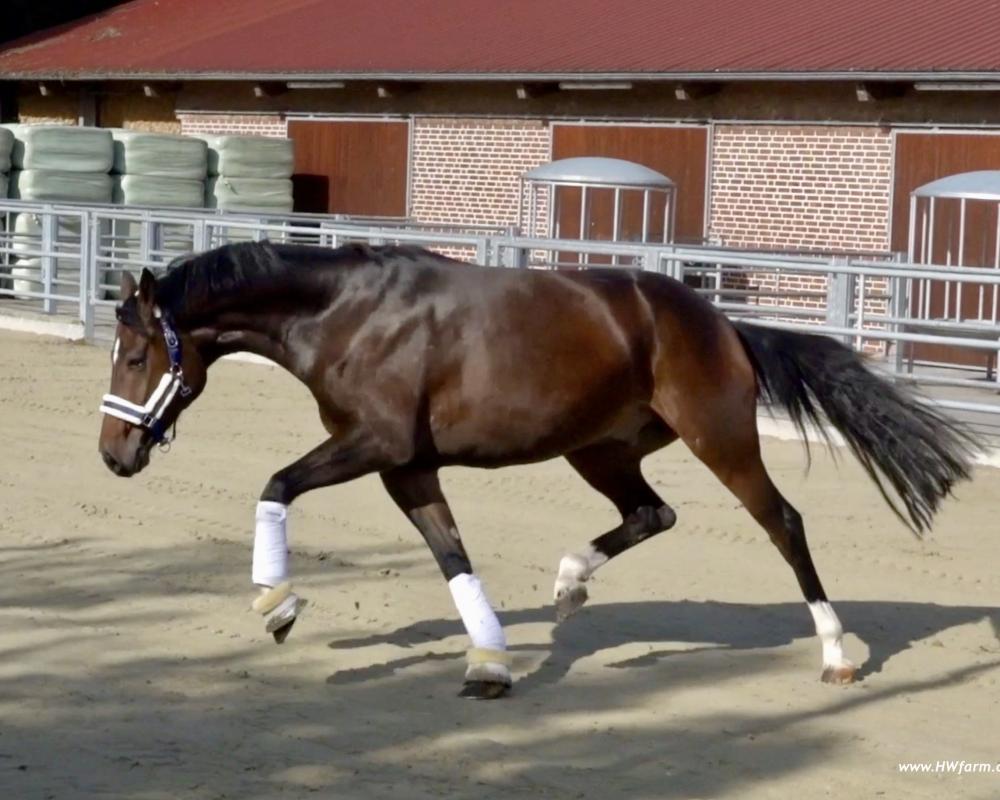 The For Romance son Frederico Fellini was the 2nd Reserve Champion of the Westphalian licensing. He is out of the full sister to the internationally successful Grand-Prix horse Don’t Forget (A. Balkenhol/P. Kittel).
Diamond Hit is an established hero among the international top sires – one of the performance-strongest offers from the parental home of Donnerhall. Diamond Hit is “purveyor“ for auction sites (Vechta 2015 – 110,000 Euro, Vechta 2016 – 100,000 Euro – most expensive filly ever), Bundeschampionat and world championships of young dressage horses. Every year, numerous offspring compete in Warendorf. The licensed son Donavan became Bundeschampion of four-year old stallions in Warendorf in 2005, his daughter Loxana was the sovereign champion at the Oldenburg Elite Broodmare show in Rastede, where ten Diamond Hit daughters were named State Premium Mare. Diamantenbörse became Oldenburg Champion for three-year old riding horses and achieved the bronze medal at the World Championship for young dressage horses in 2008 and was then internationally successful at advanced class. In 2017 Dominy became the unchallenged Bundeschampion of five-year old dressage horses. In the meantime, the number of licensed sons has increased to 65. Especially Don Diamond caused a sensation as Southern German licensing winner, national champion, Southern German Champion and Vice Bundeschampion. In 2012 he was Master Stallion of the Year in Stuttgart. Recent stallion highlights are e.g. Daily Deal (NRW reserve champion in 2010), the 2016’ Champion Stallion in Redefin, who became the 2017’ Riding Horse Champion in Mecklenburg, the 2017’ premium stallion in Oldenburg, Diamond First, two 2018’s premium stallions in Redefin and 2018‘ vice-champion stallion in Vechta, Dodo Weihgand. At all show grounds in Germany he presented absolutely top-class elite mares. 87 of his offspring have been successful in advanced (S) dressage classes. The most successful of them are Hawtins Delicato/Carl Hester (GBR), Loxana/Daniel Bachmann Andersen (DEN), Daily Discovery OLD/Riana Mauersberger, Dark Diamond 22/Hubertus Schmidt and Della Cavalleria OLD/Victoria Max-Theurer (AUT).
No less spectacular is Diamond Hit's sporting career: In 2002 he became Vice World Champion and Vice Bundeschampion of five-year old dressage horses. A year before, he was Oldenburg Vice Champion and Vice Bundeschampion of four-year old stallions. At the 2001' Bundeschampionat he was especially awarded by the Ministry of Agriculture for being the best licensed and performance-tested stallion. In 2005 he was proclaimed VTV-Dressage Stallion of the Year on the occasion of the Oldenburg Stallion Days. Then, he competed successfully up to international grand prix level. In 2012, Diamond Hit retired from sport in a stirring atmosphere during the Oldenburg Old Stallion Parade.
Diamond Hit is of good family. The sire Don Schufro, long-time leader of FN's predicted breeding value statistics Dressage, was victorious internationally up to Grand Prix and bronze medalist with the Danish team in Hong Kong in 2008. The dam Loretta produced at first Sandro Hit followed by Diamond Hit and finally Royal Hit, so that she is probably the most influential Oldenburg mare of her generation. Ramino and Welt As, who are next in the line of ancestors, became both top performer of worldwide recognition. Over the black sires Luciano and Waidmannsheil the line, which also produced the licensed stallions Florenzo and Likoto Hit, proceeds.
Approved for Hanover, Westphalia, Rhineland, Holstein, Mecklenburg, Oldenburg, British Warmblood, German Sport Horse, Breeding association for German Horses.

For Romance I has been honored as the VTV Oldenburg Dressage Stallion of the Year 2019 at the Oldenburg Stallion Licensing in Vechta, Germany, on Saturday 23 November 2019.
This highly prestigious award is given to a licensed, Oldenburg stallion for his outstanding achievements in sport and breeding. On the occasion of the Stallion Gala, For Romance I OLD and Chap II was decorated with the VTV sash in the Oldenburg Horse Center Vechta.
Heiko Meinen, head of the R+V VTV General Agency, which is specialized in insuring animals, once again took the opportunity this year to reward the breeder, as well as the owner by handing each of them a generous check in the amount of 1,000 euro for their great achievements in breeding.
The splendid career of For Romance I OLD, born in 2009 by Fürst Romancier out of Gesina by Sir Donnerhall I - Don Schufro - Sandro - Gepard, bred by Gestüt Lewitz, and owned by Dressurpferde Leistungszentrum Lodbergen GmbH, was launched in 2011 when the Dressurpferde Leistungszentrum Lodbergen acquired the celebrated champion stallion of Oldenburg licensing on the Oldenburg stallion market.
Carefully schooled by former auction rider Kira Wulferding and successful in dressage horse tests in classes A through M, this gorgeous stallion celebrated his first triumph in 2016 in advanced classes as well as a place in the top ten at the Nürnberger Burg-Pokal finals in the same year. In late 2017, For Romance I OLD’s further athletic development was taken over by Lodbergen’s head trainer, Therese Nilshagen. This year the pair won silver in both the Intermediaire II tests and the Short Grand Prix.
“Romance possesses extremely good rideability and collection. Working together with our trainer Klaus Balkenhol, we now want to concentrate on making him stronger, making optimal use of his excellent hindquarters and work carefully towards Grand Prix sport. Although For Romance I OLD is in great demand as a breeding stallion, he is incredibly sweet and will do almost anything for a lump of sugar. He’s also extremely well-behaved, even when other horses are in the arena.”
The 36-year-old Swedish trainer took bronze at the European Championship in Rotterdam this year with her other Oldenburg ambassador, Dante Weltino OLD. This black beauty is not just thrilling horse fans in sport. He’s also sired about 30 licensed and price-winning stallions, including the champion stallions Fashion in Black and Feuerwerk, the HLP champions Ferrero and Fidelio Royal and numerous premium stallions including For Final OLD, national vice-champion and third-place winner in the state championship, likewise stationed at Lodbergen. For Romance I OLD has also sired more than 80 premium mares and numerous championship winners.

“His offspring inherit his lovely face, his outstanding typical beauty, his elegance, his rideability and his absolute determination to win”, reports Lodbergen’s manager Wolfgang Stagge. “Romance consistently succeeds in producing not just horses for pro riders but for amateurs as well, as his offspring are easy to handle but always come through when it counts.”
For Romance I OLD is a full brother to premium stallion For Romance II, licensed in 2015 in Vechta, For Romance III, licensed in 2019 in Redefin, and champion elite mare and national champion Fasine OLD. He is also half-brother to 2015 Mecklenburg licensing champion Feinrich and to 2017 Oldenburg champion mare Fürstin Gesine by Fürst Heinrich. For Romance I OLD's dam line goes back to the renowned sire Voltaire.

Beautiful doesn't even start to describe the looks of this willing young star.

Already working steadily at 2nd level, he is truly a fast learner.

Frederic HW has a fancy small head, attractive stallion neck (he is a gelding)
and the body to match.
He's a super model and will steal your heart in no time.

Frederic HW's has superb "Grundschwung", his suspension is marvelous.
He has a very good rhythm, balance and truly works his heart out, every single time.
Very reliable, sweet, easy Lady’s horse,
suitable for AA, YR and/or Professional as well.
He is light in the bridle, easy to sit and everybody can ride him.
Part of his phenomenal heritage are the best competition genes possible, good, old, very strong dam and sire lines, a near guarantee for success.
His pedigree reads like the Who's Who.

The very active hind leg pushes him up, supports lift of the whole body and will be the ideal start for a good piaffe and passage, just check how far he reaches under, his canter is lofty and uphill, amazing trot combined with a
clean, rhythmic, reaching walk, outstanding quality movement all around.

This special boy, just floats above the ground, with his great temperament,
sweet character, he will climb up the levels with ease and fun.
All exercises come naturally to him, as he has the built,
movement and athleticism to do it all.

Frederic HW will put a spell on you, with his soft eyes and in no time, you'll be in love with one of the prettiest horses available. The judges will love him due to his expression and "show me" attitude, take him to shows and collect your ribbons.
Show him off at clinics and get yourself noticed, he will enable you to fulfill your dreams with all his sensational abilities, collect all ribbons with ease, high point and more, here we come.

Priced including import and quarantine to NY, check out his video clip!!!