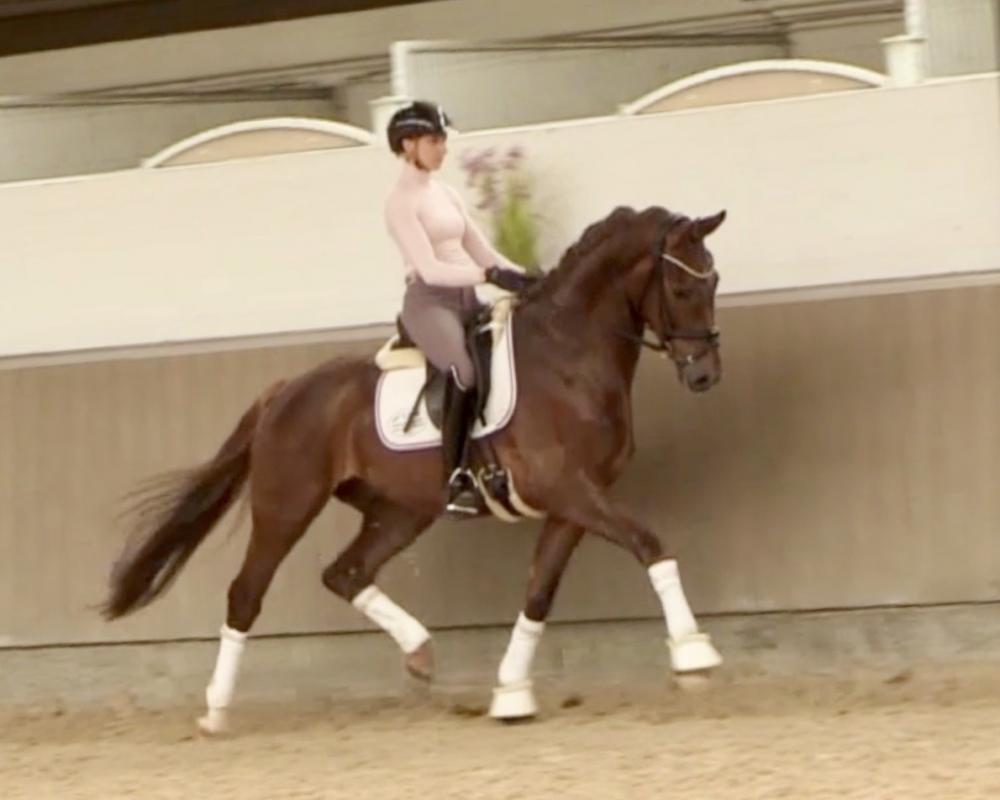 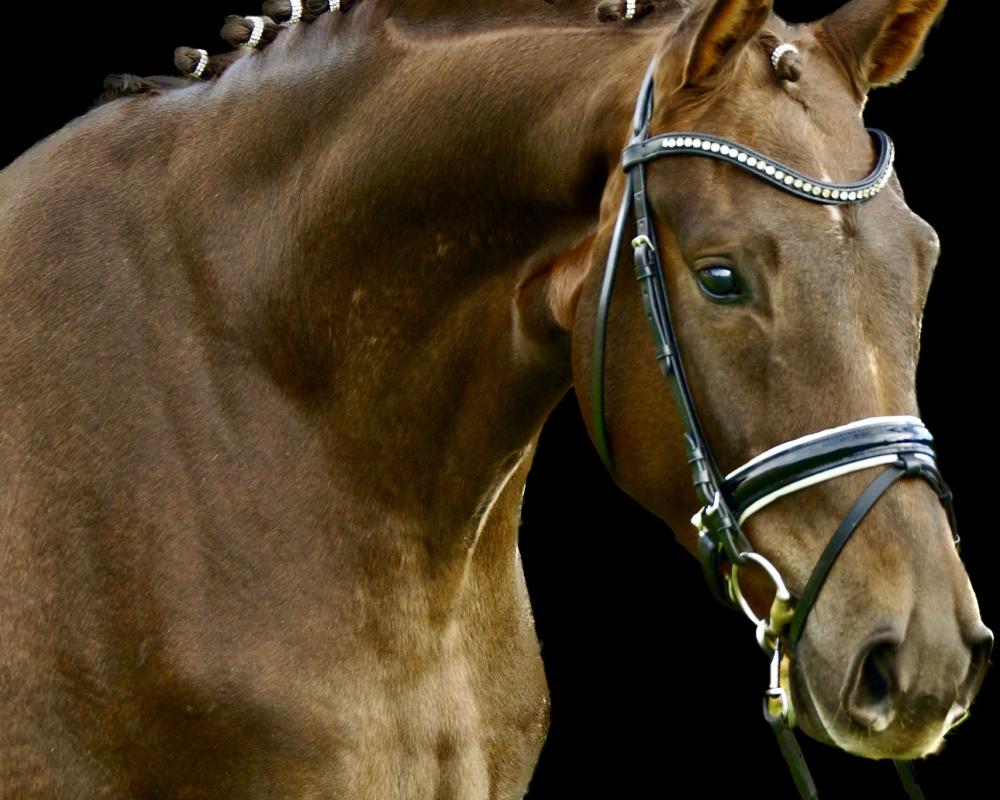 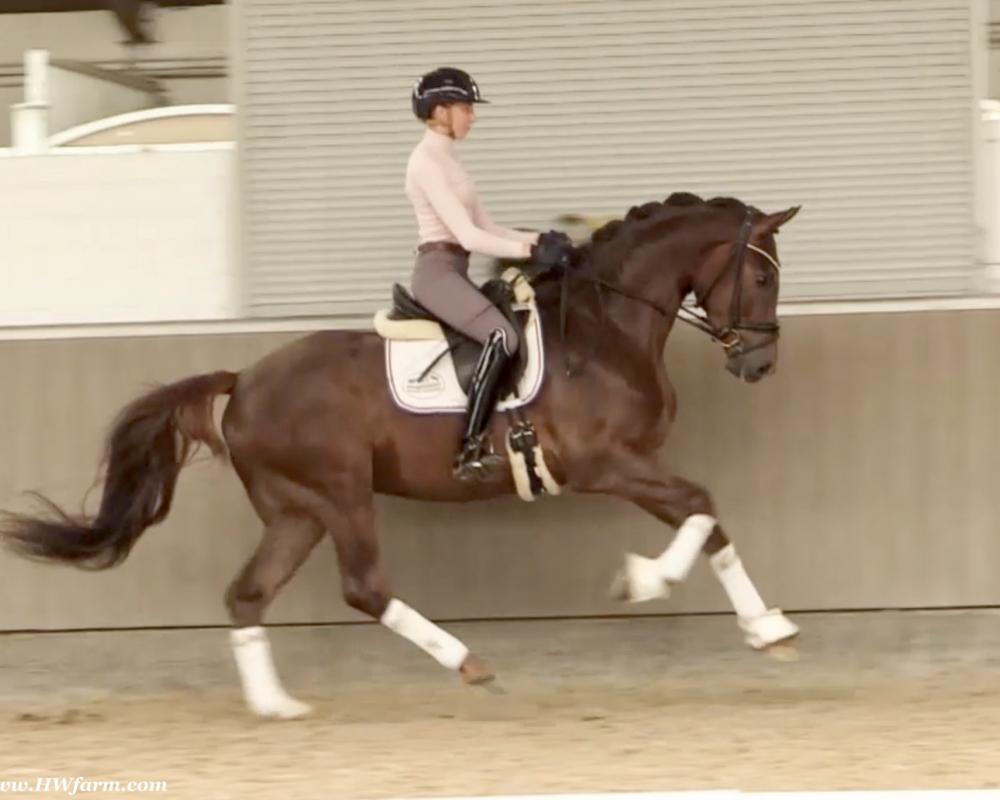 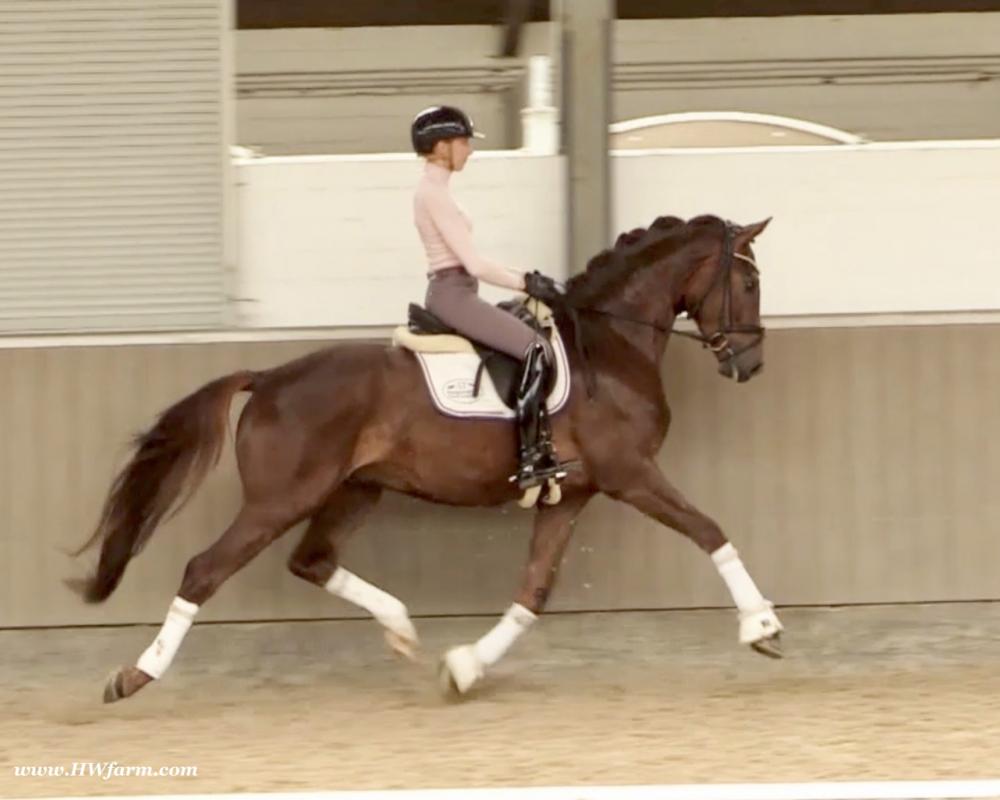 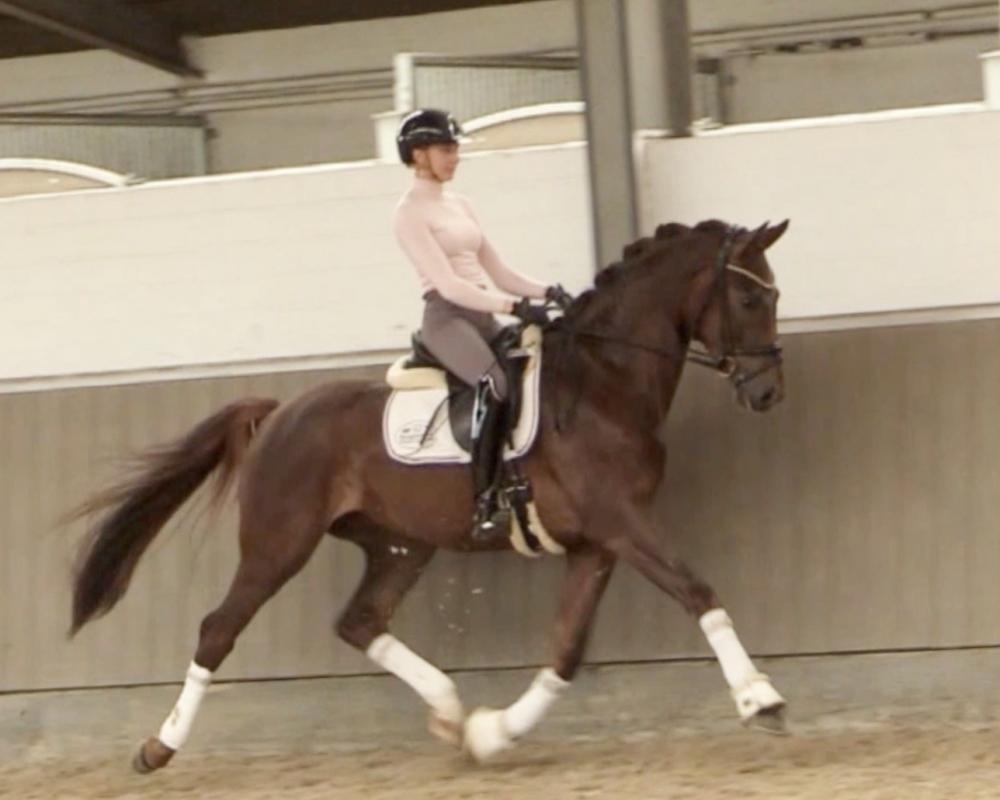 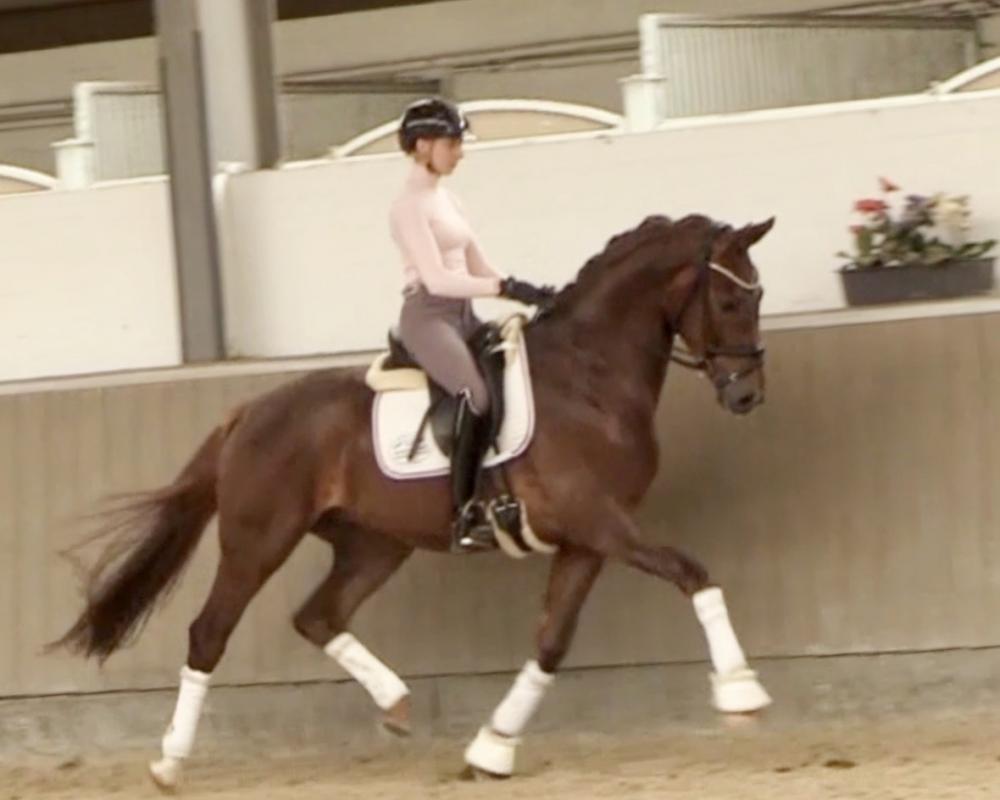 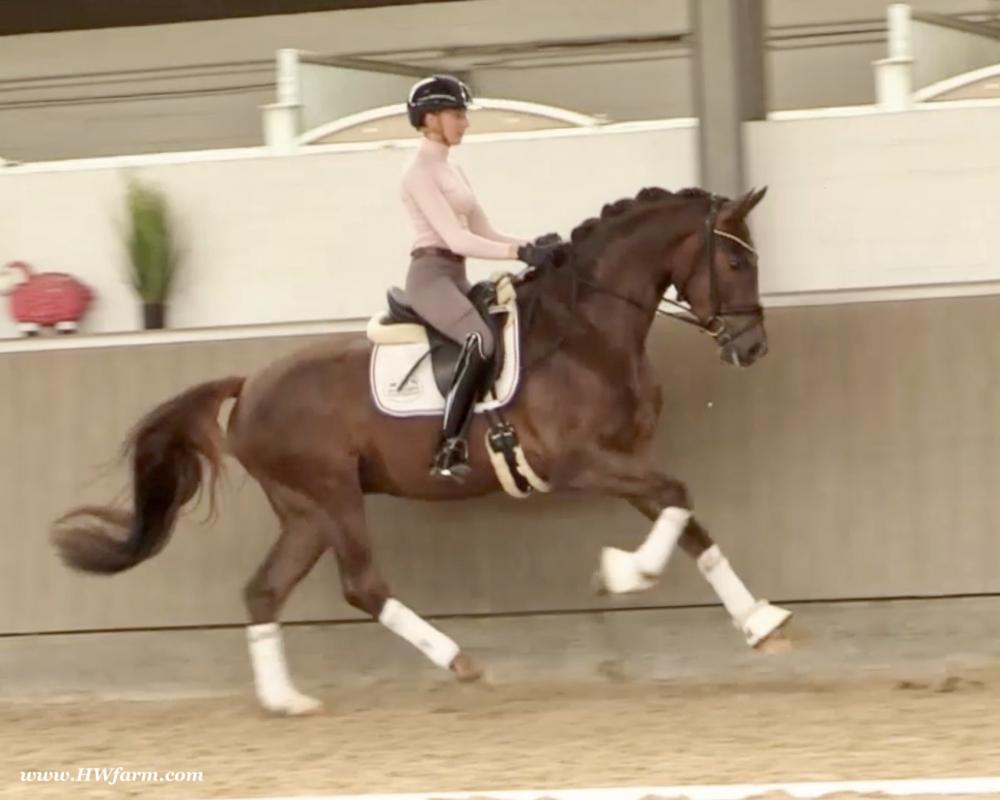 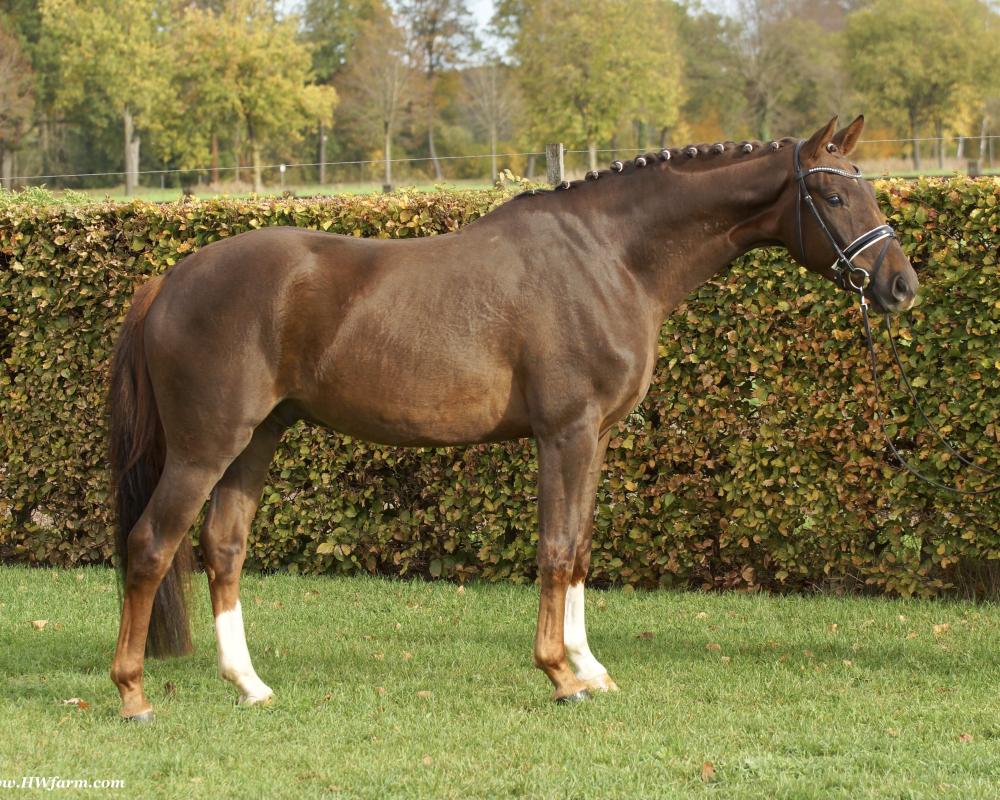 FrontMan HW’s sire is the premium stallion Franziskus, he impressed the spectators at the Westphalian licensing in 2010.

He has a brilliant type, a perfect frame as well as a harmonious and correct exterior. His basic gaits are perfect: He walks with diligence and beat, he trots with impulsion and forward thrust and he canters uphill. Franziskus was already very good as a foal. He won the qualification to the German foal-championships. In 2011 Franziskus absolved the 30-days-test in Münster-Handorf successfully: He got a score of 9.0 for trot, canter and rideability in the training and 9.5 for his character. The test rider gave him even 9.5 points for rideability.

Continuing his life of success, Franziskus soon became Bundeschampion of the 4-year-old riding stallions with top marks when he was presented by both his own and by foreign riders in 2012. The Olympic rider Ingrid Klimke began riding Franziskus at the end of 2013 and was victorious with him in his first dressage class for young horses, at "M-level" (the highest class 6-year-olds can compete in Germany).

Franziskus' sire Fidertanz began his career by winning the Westphalian licensing and the 30-days-test in Neustadt/Dosse.

He was runner up at the "Bundeschampionat" and was the main premium award winner in 2006. Since then, Fidertanz has placed in many advanced dressage classes.

His dam, Antara, has also produced the licensed stallion Dementi, who is successful in advanced dressage competitions as well.

His Dam's sire, Alabaster, was "Bundeschampion" of young dressage horses.

In the third and fourth generation, there are the international sport horses, and important stallions, Rubinstein I and Grundstein I.

The basis of the dam line is the Irish thoroughbred mare Daffy Toban xx (by Go Tobann xx-Mustang xx, family 2). That line produced the sires Count on Me, Grafenstein and Winston hervor, as well as the international sport horses Grand Giraud (Alexandra Simons-de Ridder) and Calman, who won the Grand Prix of Nörten-Hardenberg with Rolf Moormann.

Franziskus' sire, Fidertanz, started his phenomenal career in the year 2004 as NRW-Champion Stallion in Münster-Handorf. In 2005, Fidertanz won his 30-day-test in Neustadt/Dosse with excellent results, and became Vice Bundeschampion with a top score of 9.5 in test-riding. In the year 2006, Fidertanz won the High Premium award for dressage-stallions at the Oldenburg-licensing in Vechta. In the meantime, Fidertanz has been trained up to the advanced level in dressage.

Franziskus' dam, Antara, produced with De Niro the licensed stallion Dementi, who is successful at the advanced dressage S Level. The dam's sire is the former Bundeschampion of German Dressage Horses, Alabaster. The third and fourth generation of the pedigree is refined by the internationally successful top-stallions Rubinstein I and Grundstein I. The dam line is based on the Irish thoroughbred-mare Daffy Toban xx (v. Go Tabann xx-Mustang xx-Flamenco xx etc,, thoroughbred-familiy 2). Some of the stallions out of this line (which is followed by the breeding-familiy Albers since the mid 1970's) are e.g. Count on Me (PB Denmark), Grafenstein (PB Oldenburg, State Stud Redefin and Marbach), Winston (PB Hannover, State Stud Celle), as well as the international sport horses Grand Giraud/Alexandra Simons-de Ridder and Calman, who won the "Goldene Peitsche" in Nörten-Hardenberg under the saddle of Rolf Moormann.

His sire Sir Donnerhall I became Bundeschampion of six-year-old dressage horses in 2006 and finished best at the 70-day test in Adelheidsdorf in 2005 (dressage index 163.87). More than 100 of his sons have been licensed, soon 400 of his daughters have been awarded premium mares.

As the first mare in history, St.Pr./El.St. C'est bon became dam of five Bundeschampions: Sir Heinrich OLD, Cindy OLD, Candy OLD, Caty OLD and Casey OLD (all by Sir Donnerhall I). Sir Heinrich OLD and Si bon were also licensed, and Oldenburg champion mares are Candy OLD and Casey OLD. Oldenburger line of El.St. Cinderella, dam line of St.Pr./El.St. Cabarett.
Sir Heinrich was licensed in 2010 at the NRW main licensing in Münster and completed his 70-day test in Neustadt/Dosse in 2011 with an overall score of 8.5, achieving the second-best result of the entire year with his dressage score of 8.99.

As a highly sought-after NRW state stud stallion, he sired 16 licensed sons, more than 60 premium mares, auction price peaks and offspring that are successful in sport.

After he won the Oldenburger Landeschampionat in 2012, he became vice-champion in national championships of four years old stallions. At national championships in 2013 he won convincingly his qualification class of five years-old dressage horses, in the finals he saved the silver medal with a scoring of 8.6 in his age group.

Sir Heinrich OLD represented the German colors as a five and six years-old in world championships of young dressage horses in Verden. He can show victories in elementary and medium level dressage tests for young horses as well as in advanced level dressage tests (S*). His sport horses career's highlight was certainly the victory in national championships of six years-old dressage horses in 2014 with a total score of 8.7 in the finals.

On the occasion of the Oldenburg Stallion Days 2016 he was awarded VTV-Dressage Stallion of the year.

FrontMan HW, such a pretty boy who impresses with super gaits and looks. A horse with the quality for all levels.
His dynamic and suspension are sensational.
He’s just amazing, a horse which will leave you speechless.

FrontMan HW has amazing freedom in the shoulders and a very strong motor and a super active hind leg.
Nicely balanced and can carry himself proudly.
Tons of airtime and hang time, floats above the ground and is a teddy bear that loves to cuddle and have his own person to take care of him.

With him, there is no limit to any level, he will compete in the big ring and be a phenomenal FEI horse. He is very elastic and a fast learner, amazing cadence. This gentleman has the right attitude and ability to do it all,
he will be seen in the upper levels, collecting the blue ribbons,
one after another.
FrontMan HW is super pretty, stallion looks (he’s a gelding), chiseled small face, huge neck and elegant, modern type, he will just look at you with his soft eyes and cast his love spell. The judges will recognize him due to his expression and "show me" attitude, take him to shows and collect your ribbons.

Show him off at clinics and get yourself noticed. He is fun all around. He is progressing really nicely, raised and correctly handled all his life, in knowledgable hands and daily attention to all details.

He grew up in a small stallion herd and is used to paddock time and was socialized correctly. He is an all around super boy, looking for his new mommy.

The goal of HW Farm is, to breed/raise/find highly talented young horses in Germany for riders in the USA and all over the world. Buy him now and show him yourself in the Young Horse Championships or take him to the BundesChampionships.

Please find more info, video and price as well as other top quality horses for sale at www.HWfarm.com