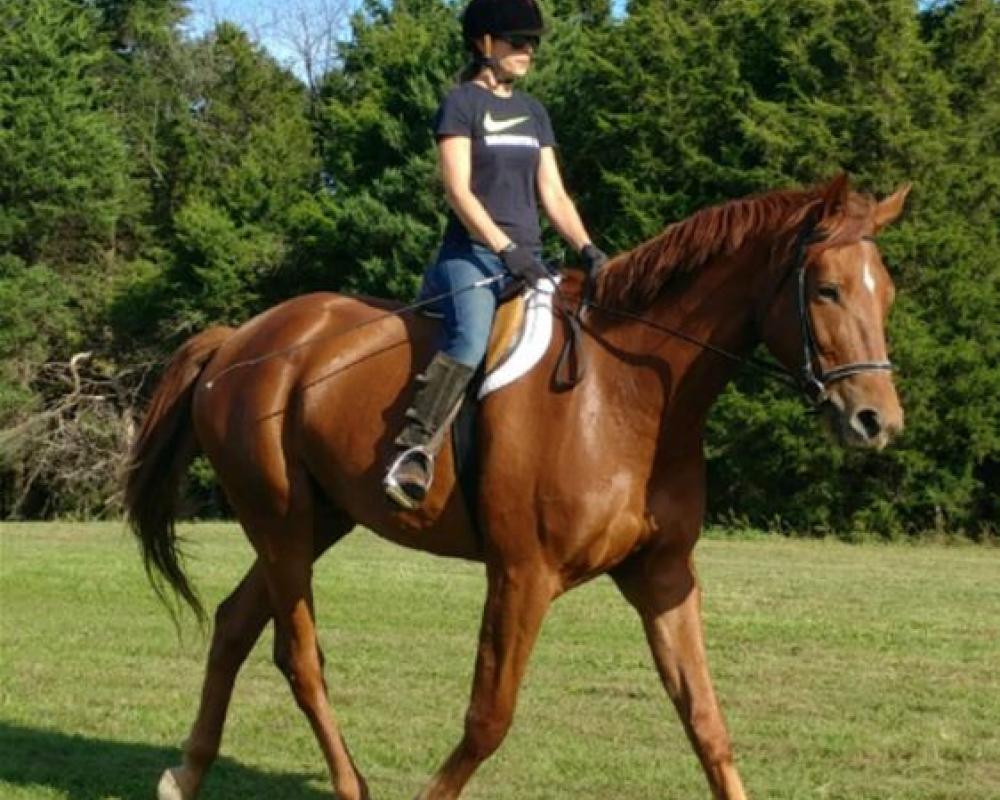 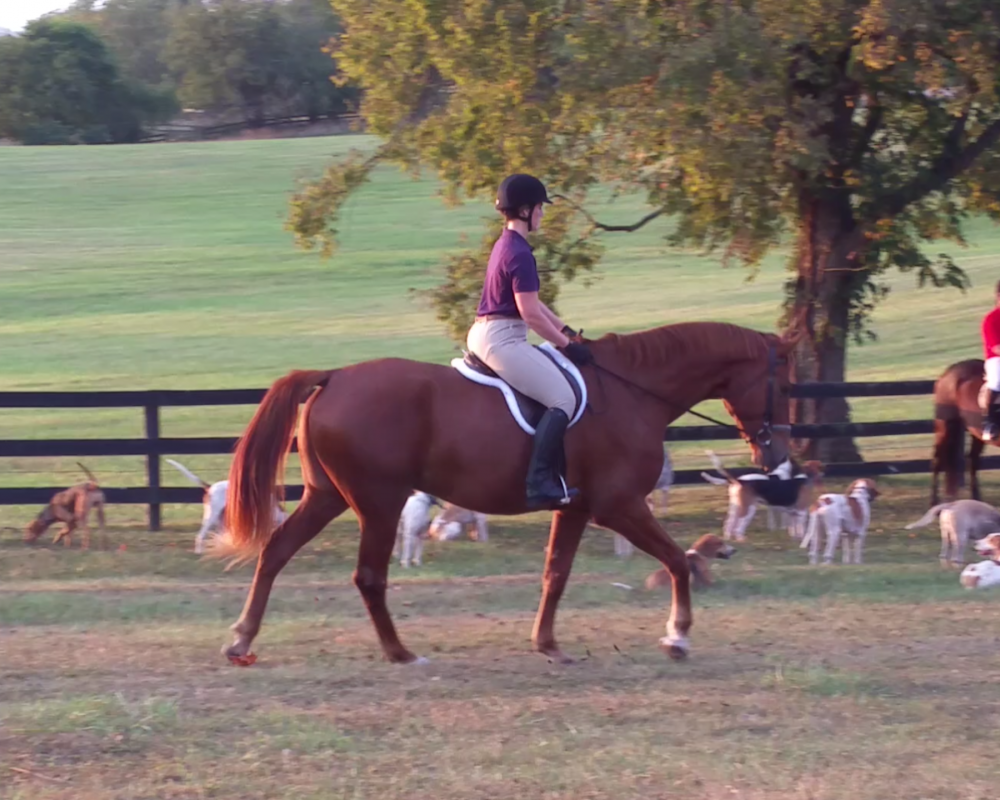 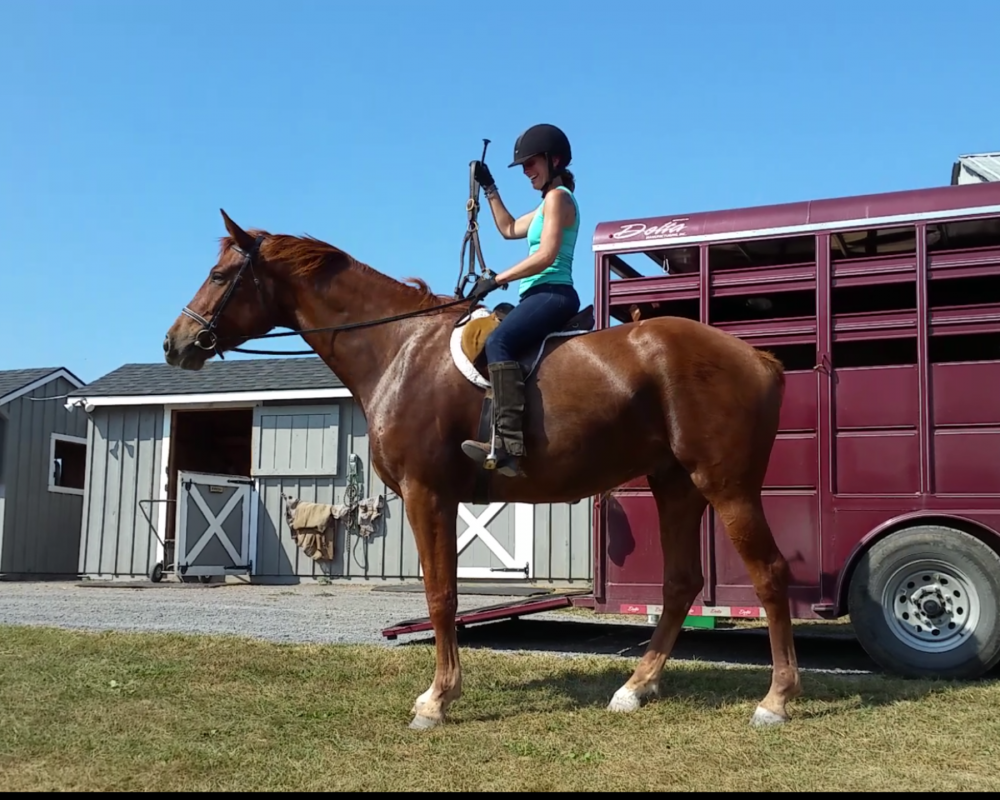 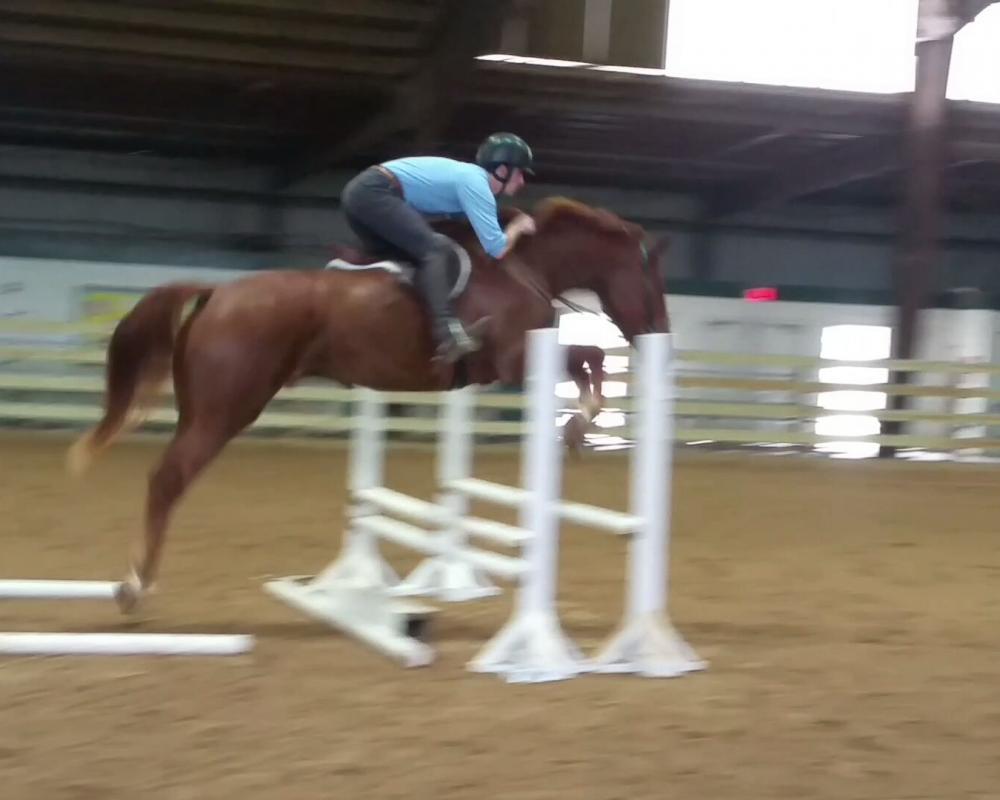 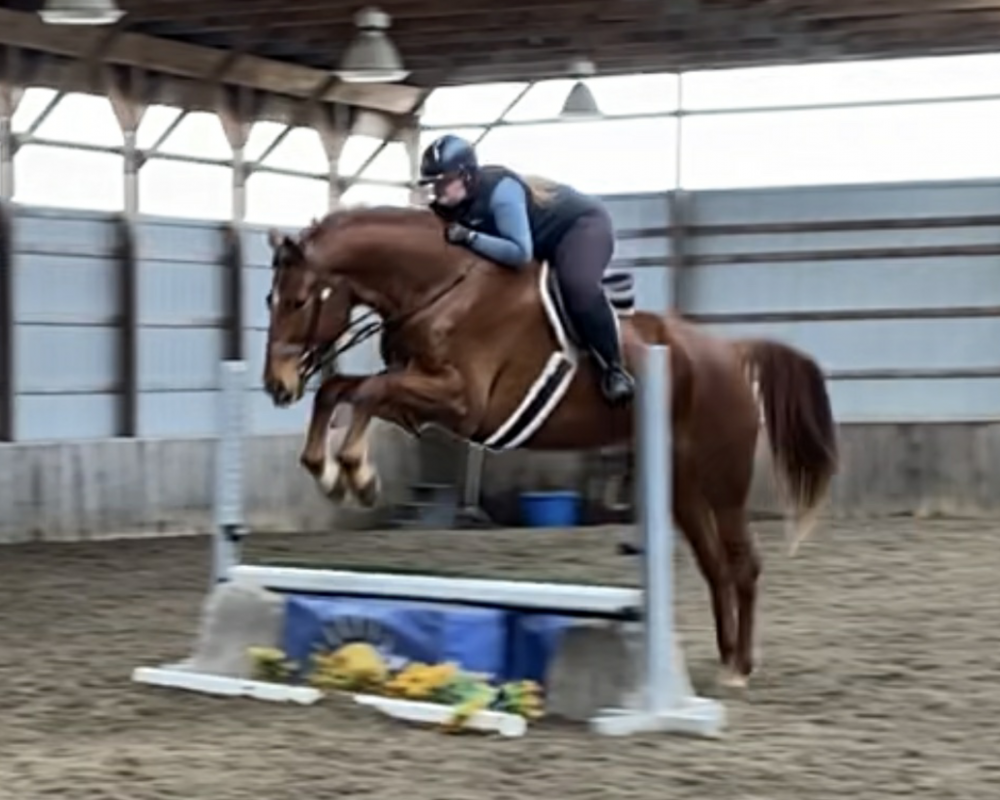 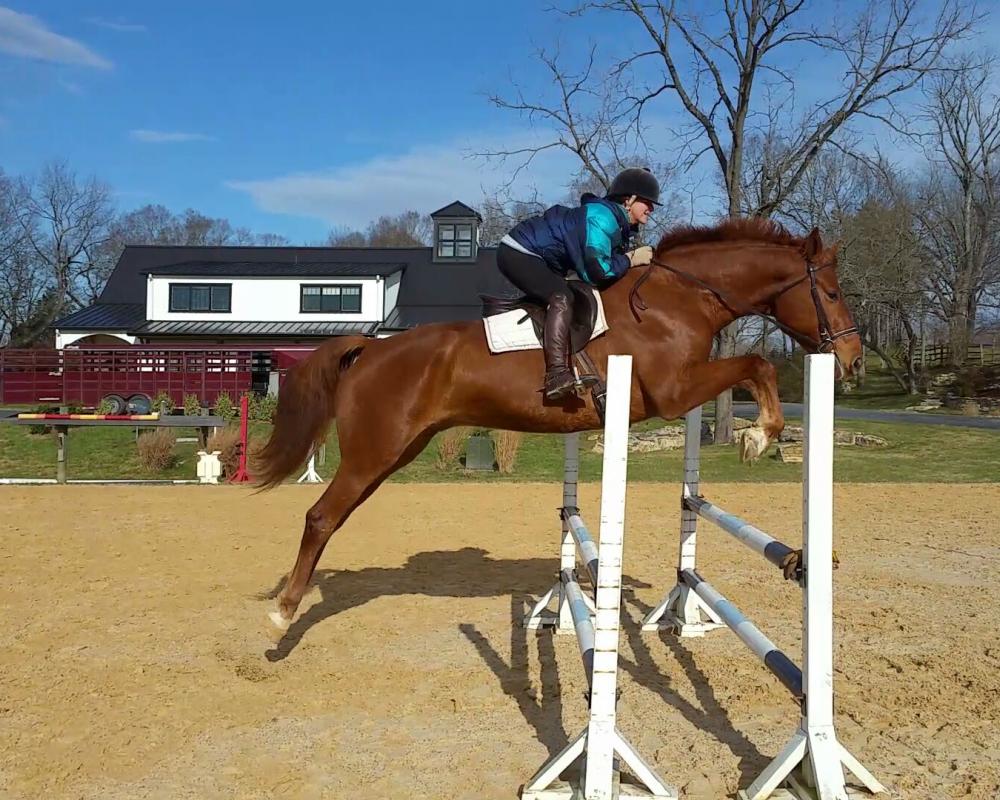 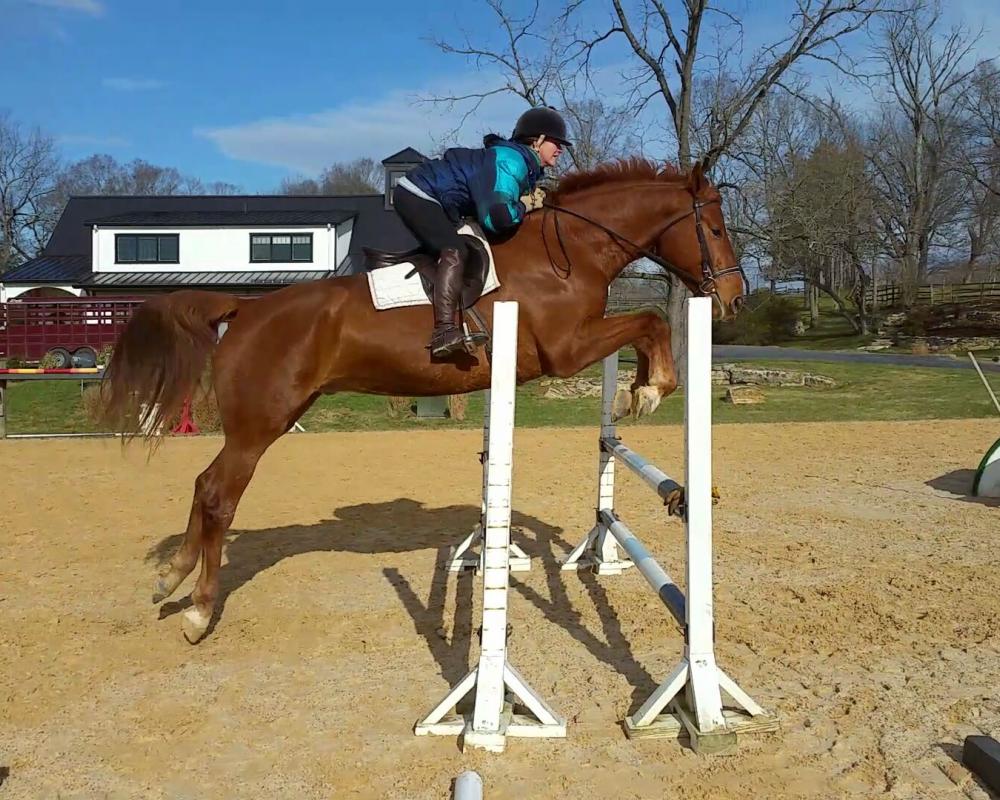 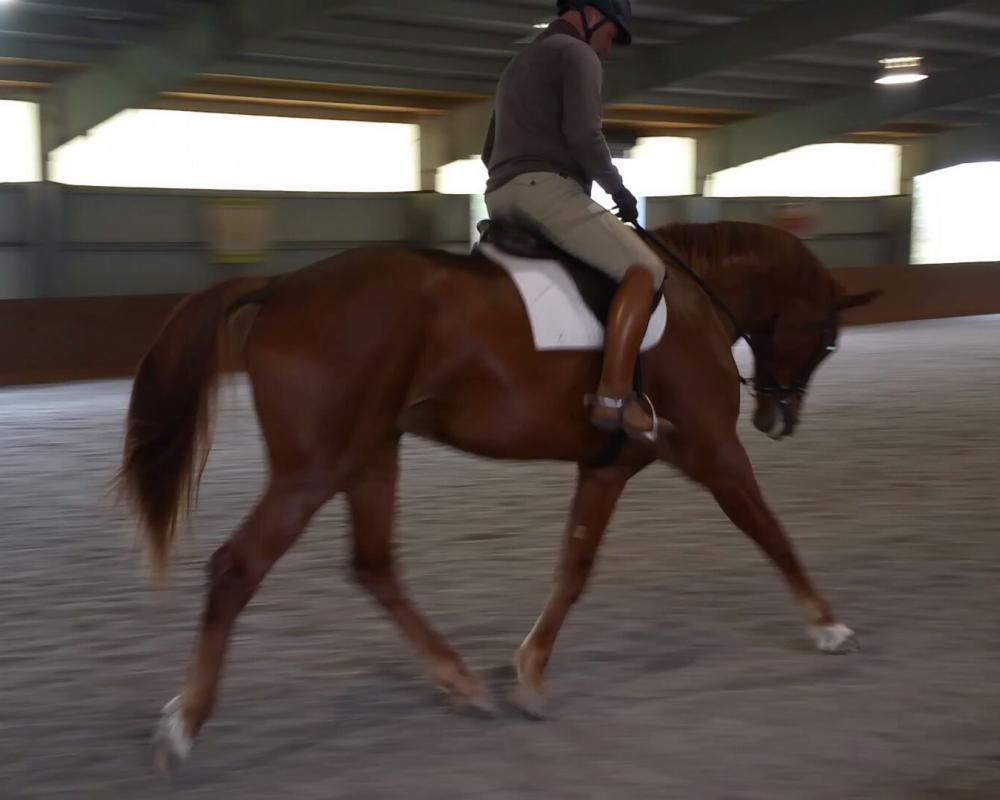 High Caliber Soul (Cal) is a well-proportioned, elegant young 17.2 hand gelding. He is a gentle giant, as sweet as he is big. Totally in proportion, well balanced beautiful mover. He is elastic and has nice suspension. He over tracks about 12-18 inches without effort.

Cal has been Hill Topping three times lately with Chloe Dibley. He is relaxed and well mannered. He is nice enough to look great with the hunt or in the show ring. He is unflappable. Cal could become a Master's horse with the right training.

Cal went Hill Topping with the Blue Ridge Hunt September 28th 2019. Corey Kirk was astride. He took in all the activity with grace and style. At one point the hounds were coming straight at him at full volume and stride. He was calm and relaxed. The first string galloped past him at a full gallop as well. The Hill Toppers had to back into some trees and shrubs to let them safely pass by. Cal was calm for that as well. He drew a lot of possitive attention from the attendees. One comment over heard was "He is so light and soft in his gait. He looks like a show horse!"

Cal was professionally started under saddle at Parade Field Farm in Lovettsville, VA with Lauren Dearlove. He continues his flat work and has begun to work over fences. Look for him in the show ring!

Cal is ready to start his career with a rider who is ready to train, ride and win. He is a willing horse with beautiful gaits and a mind to pull all his talents together for either an amateur or a professional.

He is a three time GAIG Championship Series qualifier for Dressage at Devon. Cal has consistently placed first or second at his shows and has had scores of 8 for Conformation, General impression. He has scored 7.8 for his walk and 7.5 for his trot all while being a growing weanling!

https://youtu.be/FUXubBJUafU - Jumping with a petite 19yo

He loves to jump!

High Caliber Soul (Cal) is being ridden 3-4 days per week. He had 3 bone chips from his right hock November 9th 2018 following a kick. He has recovered beautifully. All his vet records are available to a perspective buyer.

High Caliber Soul (Cal) has already made a name for himself in the Dressage Breed Ring! Lexington Spring Breed Show was his first outing at just 5 weeks of age on May 17th 2014. He placed:

First Place in the Colts/Geldings of 2014
Foal Champion of 2014
Qualified for Devon in the USDF/GAIG Championship series
First place in the Danish Warmblood IBC
Jayne Ayers was the judge that day and her comments from two classes included:
7.8 for conformation; well shaped well set neck, good bone, well-shaped croup, lovely type with good bone
7.8 for his walk; good rhythm
7.2 for his trot; clear cadence in his trot
7.5 General Impression; nice riding type
At Virginia Summer Dressage Cal was:

Cal placed 2nd with a score of 75.0
Reserve Champion for Foals of 2014
Qualified for Devon in the USDF/GAIG Championship series.

His sire, Solos Landtinus was imported to Denmark from Germany as a three year old in 1998. Already licensed in Germany as an Oldenburg, he was presented at the Danish Warmblood Stallion license at Herning and was selected as the first place stallion. At the 100 day test, despite falling ill as the test began, he was the overall winner. He scored highest in dressage and third in showjumping. He was awarded Elite Stallion in 2003 and was selected Danish Stallion of the Year in 2005

His Selle Francais dam, Temptress, is a DH graded mare by the Danish registry.