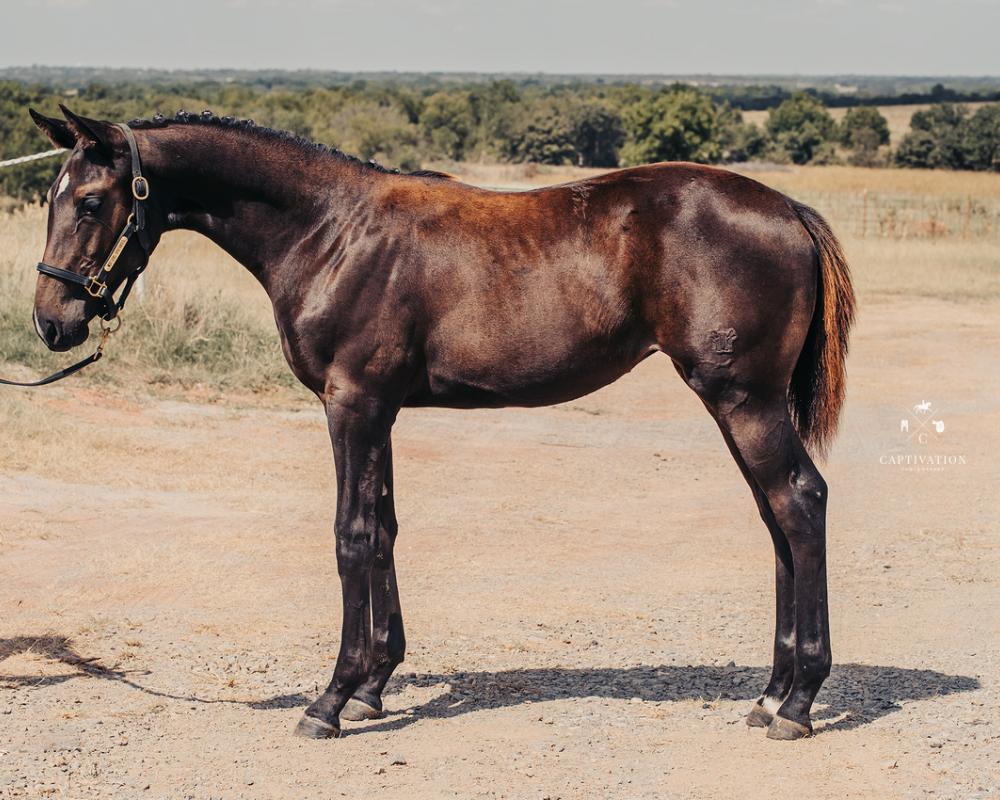 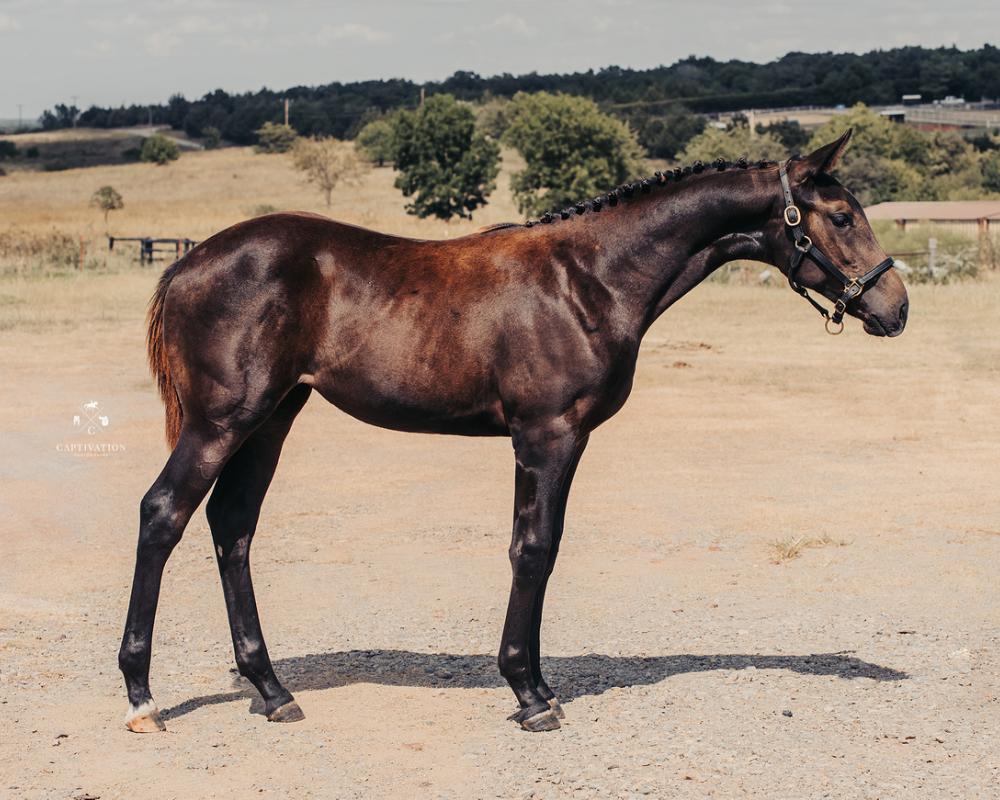 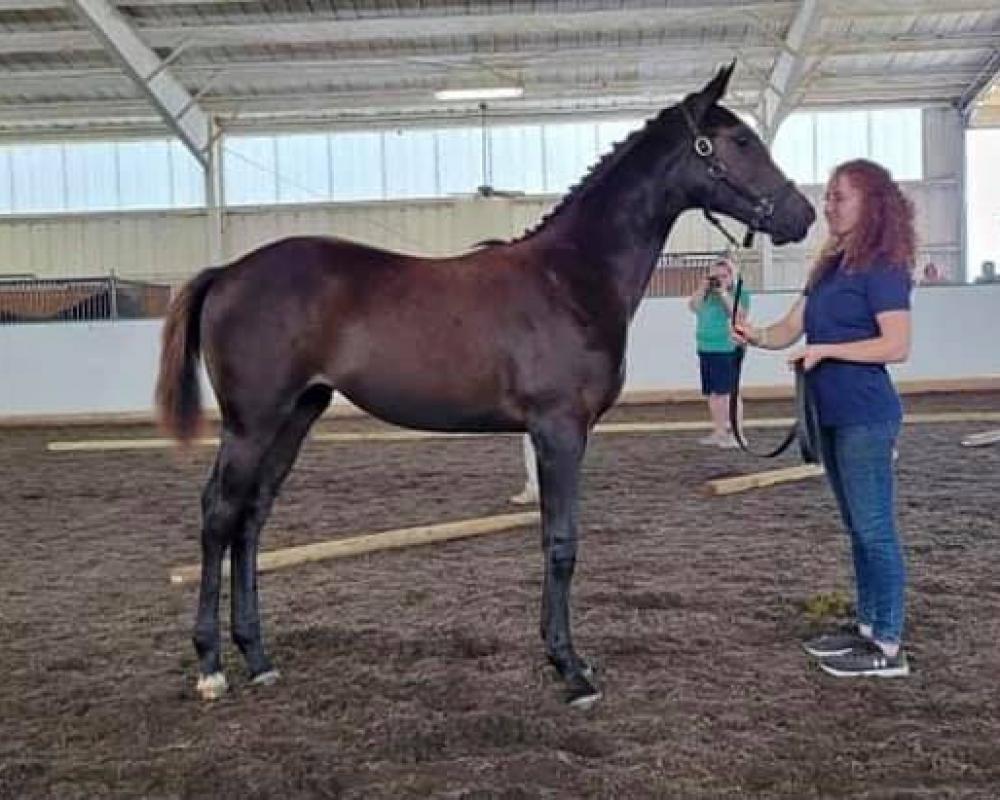 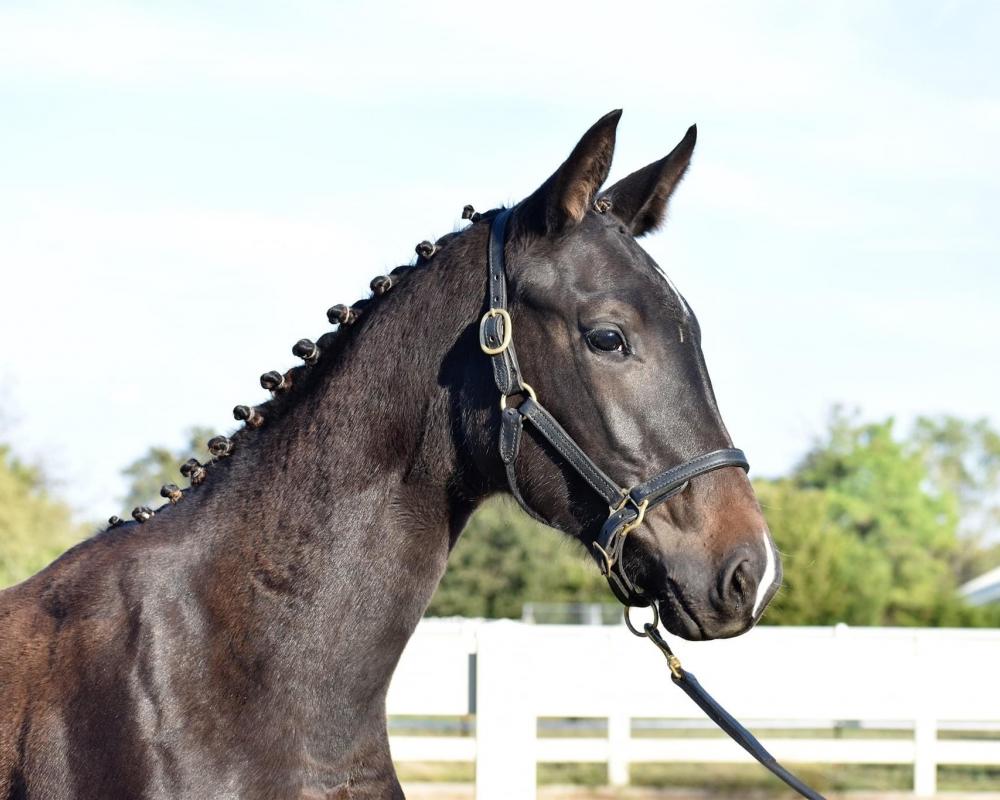 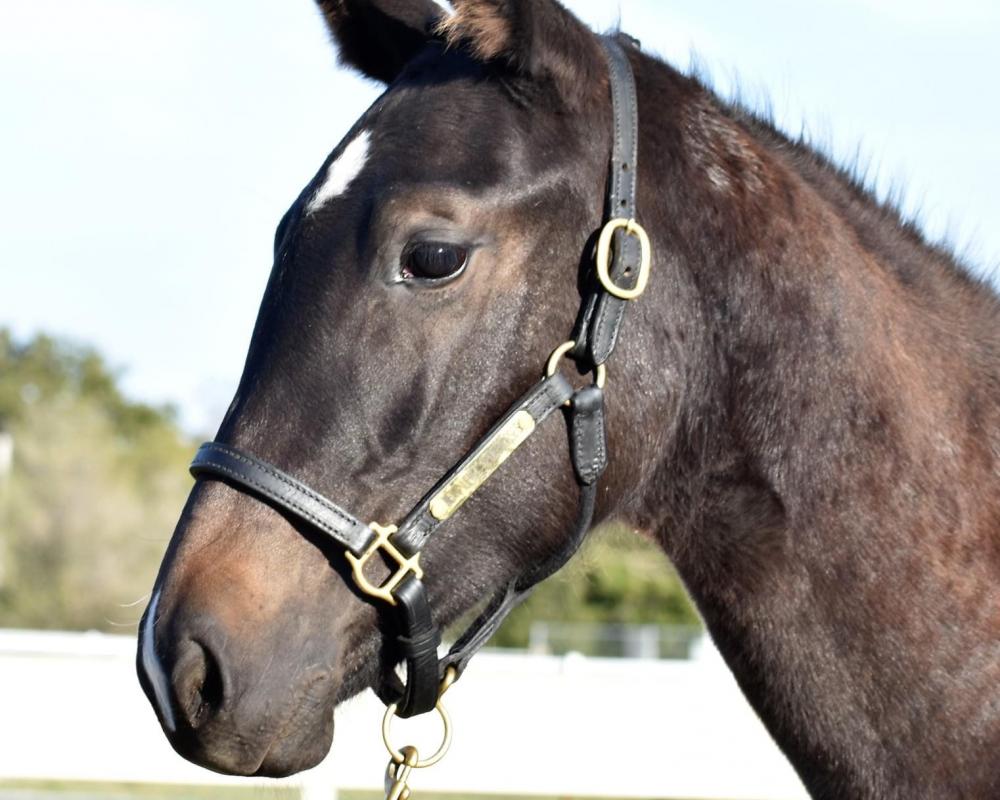 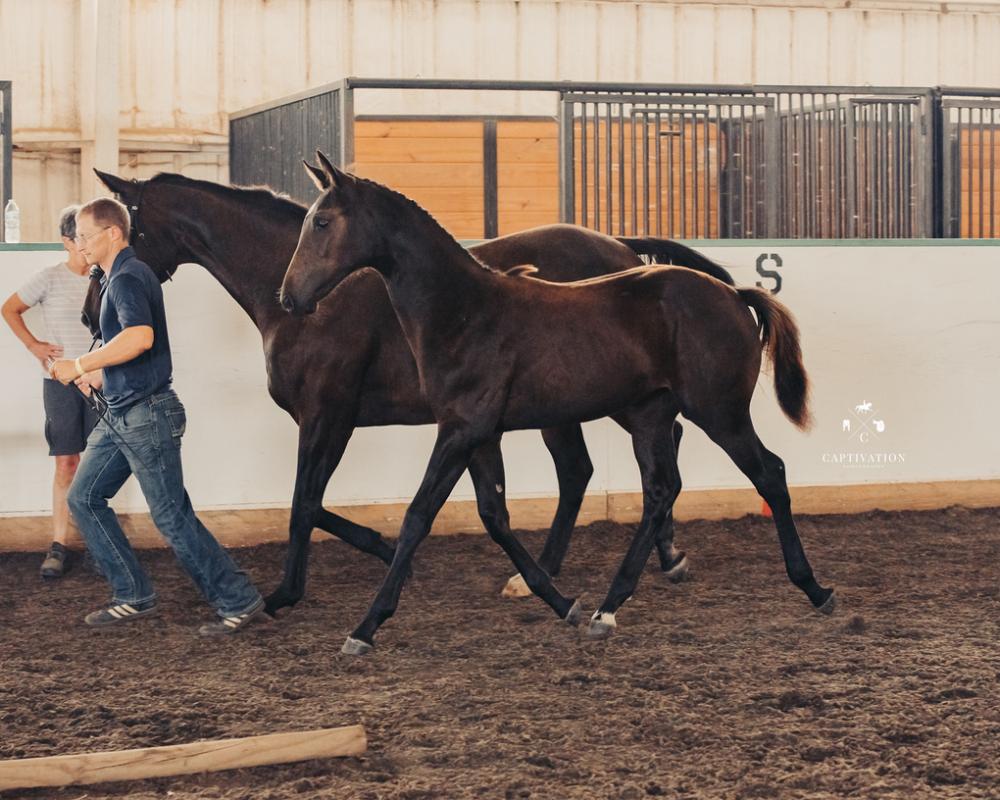 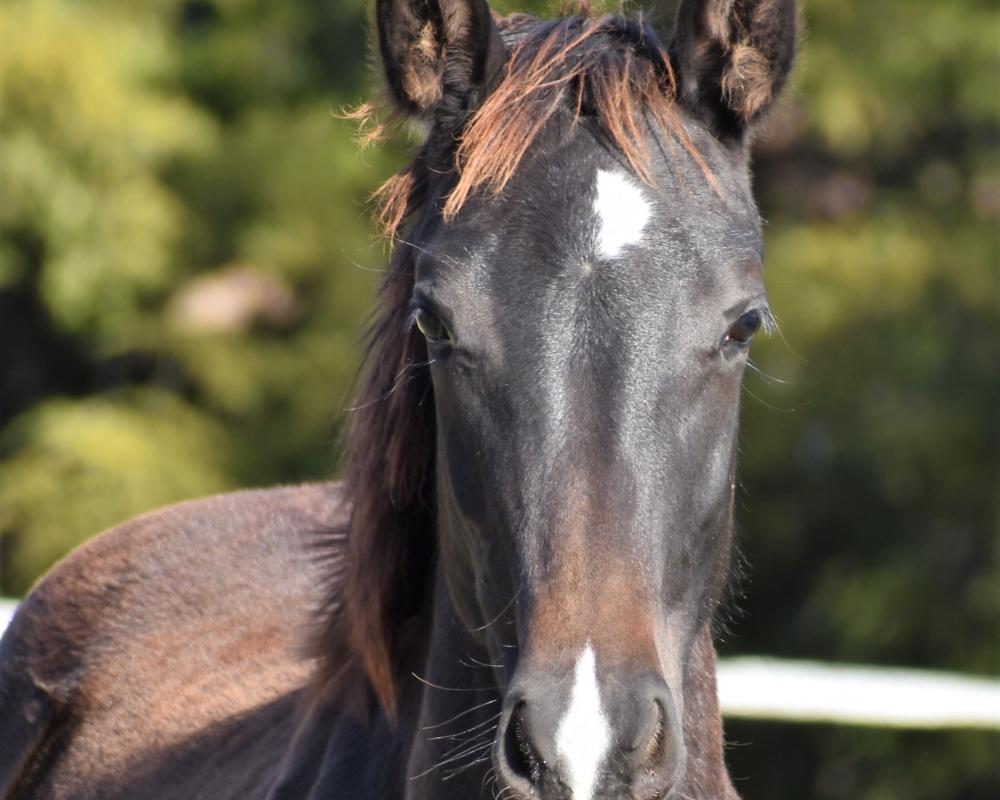 Lady May NLS, 2021 Dark Bay Filly by Lord Adonis out of a Landkonig mare

UPDATE: Lady May was top Rhineland foal at her inspection on September 15th, 2021!! The judge remarked on her beautiful conformation, and especially her quiet, personable, and sweet disposition!

Lady May NLS is a beautiful, large, powerhouse of a filly that is already showing promise as a future athlete. She is friendly, curious, and fearless, and will excel as a jumper or an eventer. Lady May NLS is the largest filly ever born on our farm, and we fully expect her to reach at least 17h, but very likely larger. If you're looking for something that can jump the big jumps, Lady May is your girl! She has the sweetest, friendliest disposition and absolutely loves attention, especially butt scratches! She will no doubt be an amateur owners dream mount, but she will also be athletic enough for the professional jumper or eventer. Lady May was Born on 3/30/2021.

Her sire, Lord Adonis 2008, 16.2hh was raised and owned in Germany by renowned international Grand Prix jumper Rene Tebbel. In 2010 Lord Adonis was presented and approved at the Oldenburg Hengst-Tage. In June of 2012 he was imported to the U.S.A. A couple of months after leaving quarantine he was taken to the 2012 North American Stallion Performance Testing where he received an impressive 7th in Dressage (110.78), 7th in Jumping (111.83) and 8th Overall (111.58). Lord Adonis was the only stallion who earned an elite status when inspected for approval by the Hanoverian Society. As printed in the AHS magazine the judges remarked: "Lord Adonis impressed because of his good type and his long legs. He clearly is still developing. In jumping, his ability was especially impressive; in the dressage test, he received high rideability values. His sire Lordanos is known to produce a ground covering walk and a good canter". The scores he received during the testing are: Character: 9; Temperament : 8.5; Constitution: 9; Stadium Jumping: 9; Free Jumping: 9; Cross Country: 8.5; Walk: 8.5; Canter: 8.25; Trot: 7.5. His modern type, confident yet quiet demeanor and versatile talents have fully licensed him with multiple breed organizations and studbooks.

Her damsire, Landkönig, was a 16.3H, bay, elite Hanoverian stallion, 4 socks, a star and snip. Landkönig completed his 100 day test at Adelheidsdorf as a three-year-old and was 7th out of 50 with 118.10 points overall and a 9.5 for stadium jumping, 8’s for willingness to work, character, temperament and the walk. Overall balanced on his jumping and rideability scores.

The Hannoveraner Jahrbuch Hengste 2005 lists Landkönig with a jumping breeding value of 132 putting him ahead of Ritual, Drosselklang, Espri, Escudo II, Grosso Z and many other top German Grand Prix producers! Landkönig is in fact the highest rated jumper listed, standing in the U.S. listed in the 2009 Stallion yearbook with a jumper breed value of 135 and 140 for ability, slightly higher than super producer and 2007 stallion of the year Argentinus.

Landkönig has produced, from his first foal crop, a licensed Hanoverian stallion son and in 2002 broke the record for producing the highest selling jumper ever in the history at the Hanoverian Elite auctions in Germany. Lantinus, a four-year-old gelding sold for Euro 215,000 also setting the record price for the Hanoverian auction year, something never done by a jumper!

This filly will likely mature to over 17h. Both of her parents are homozygous for black, therefore this filly will be homozygous as well. She has been inspected, registered and branded with the American Rhineland Studbook. She will be weaned at the end of September, and will be available to go to her new home shortly thereafter. Keep checking back for updated photos and videos, we post them as we get them! Visit www.nextlevelsporthorses.com for more information, and continue checking back for more updates!