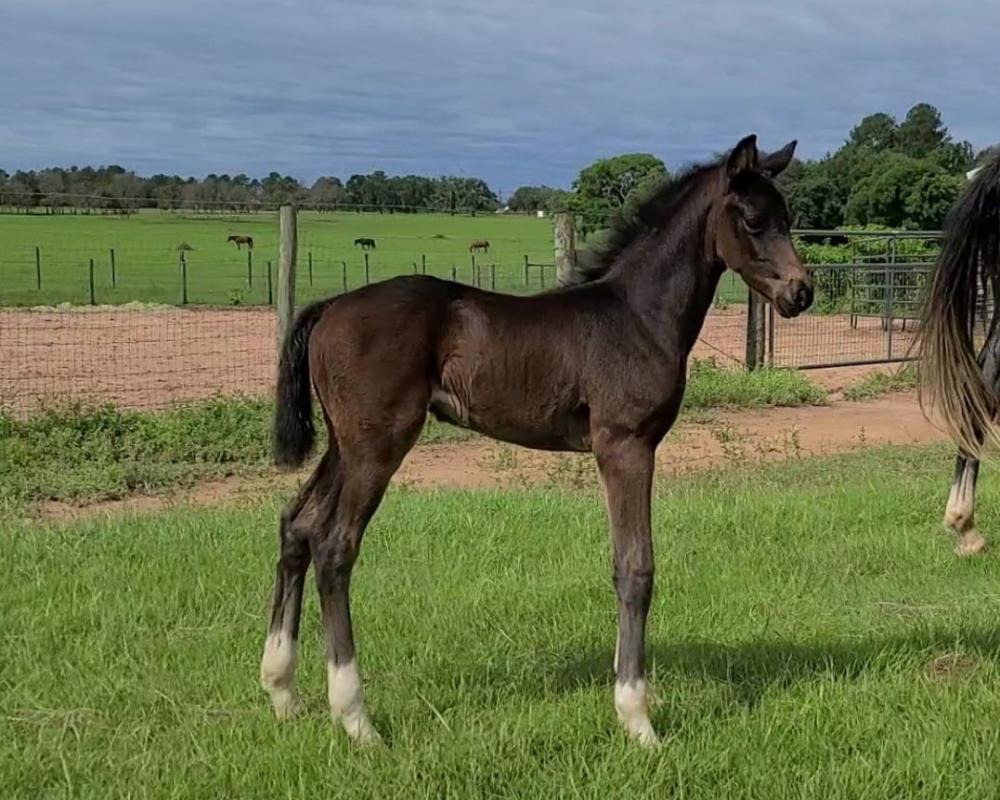 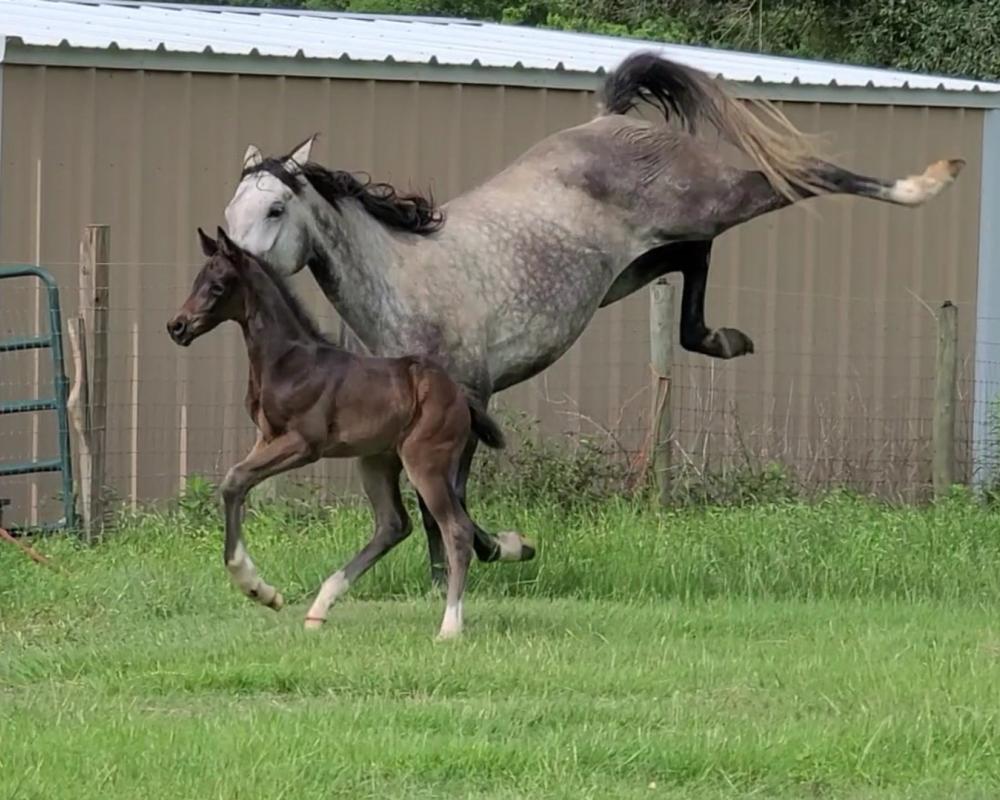 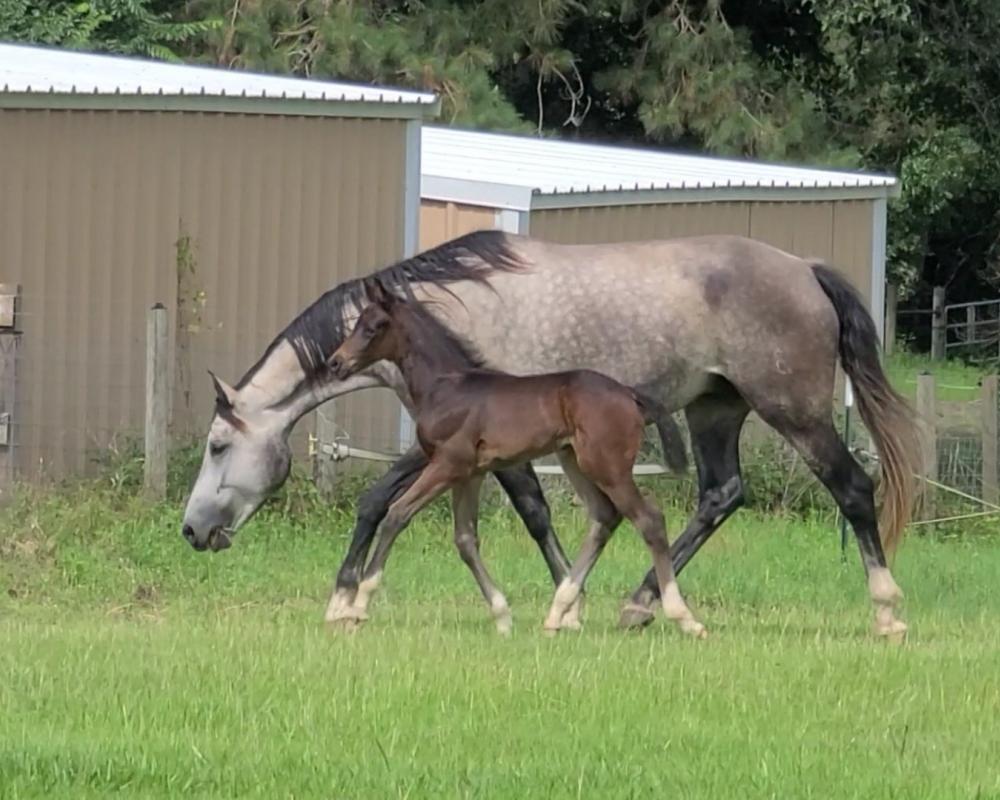 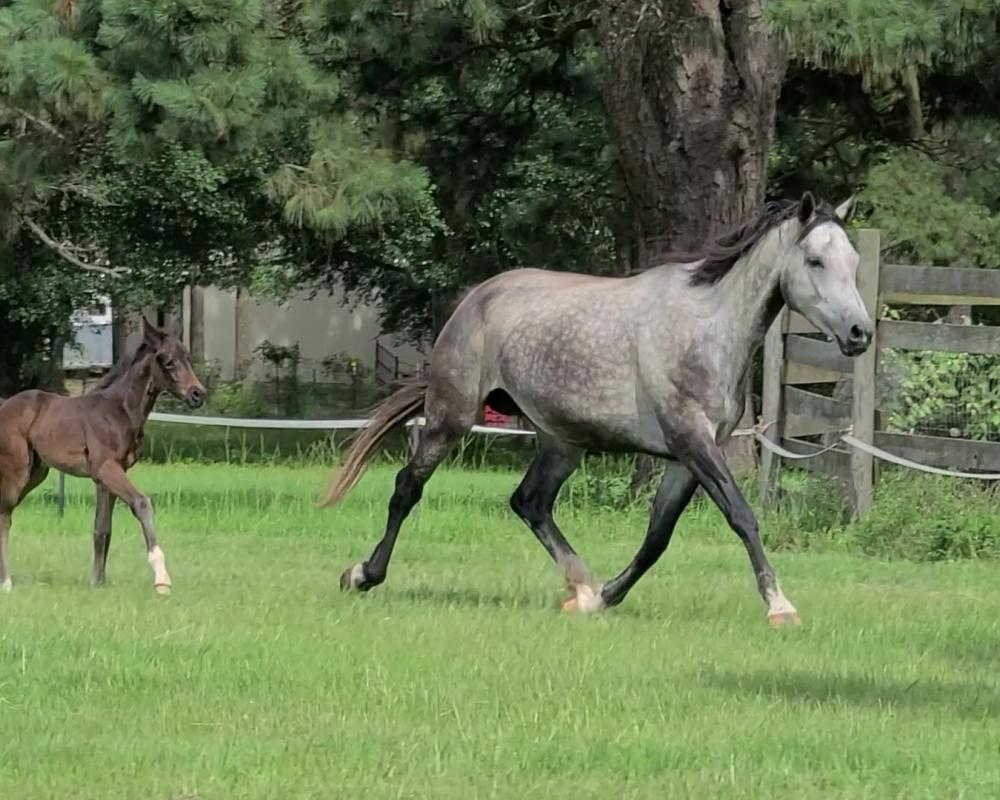 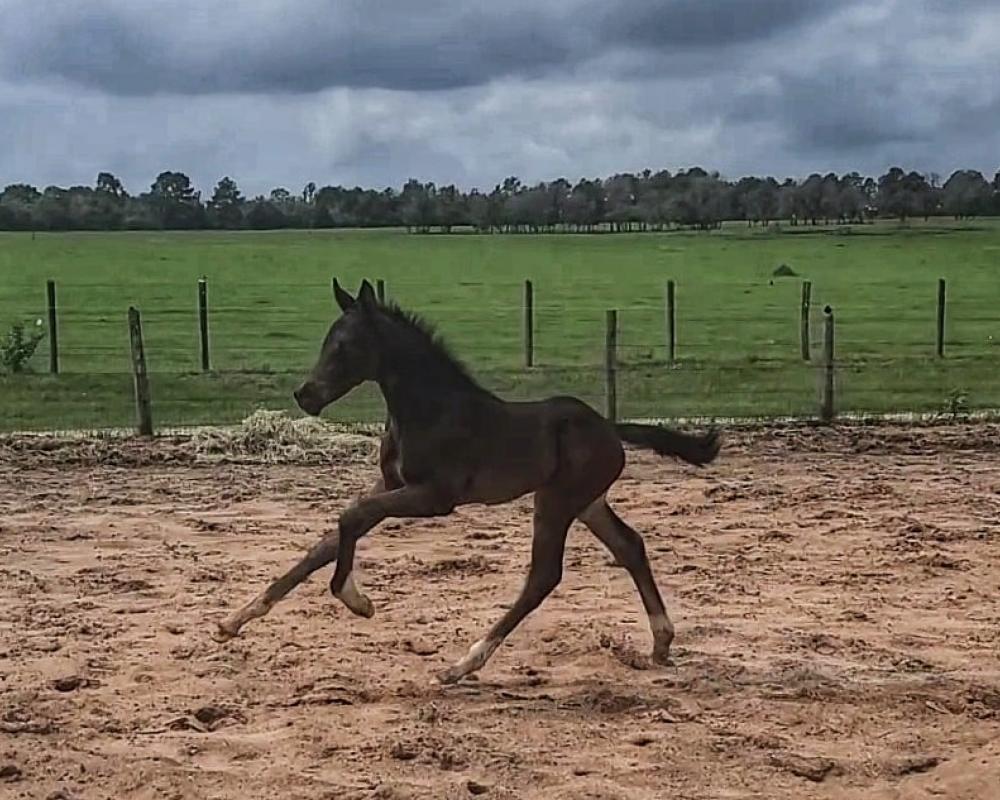 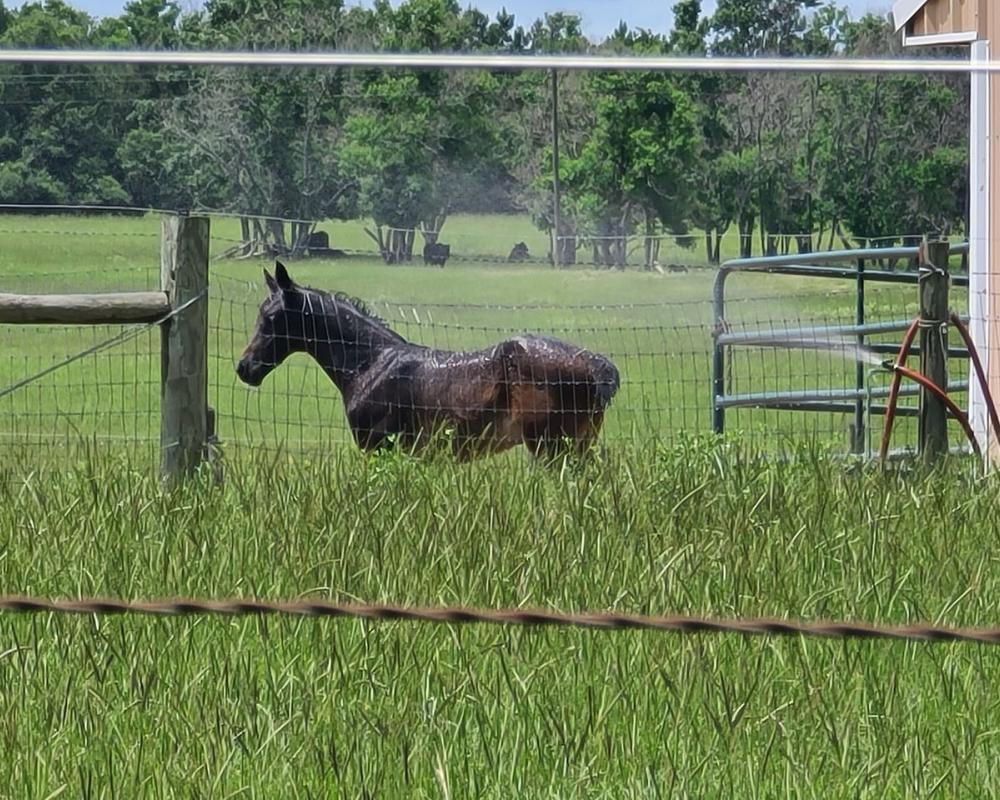 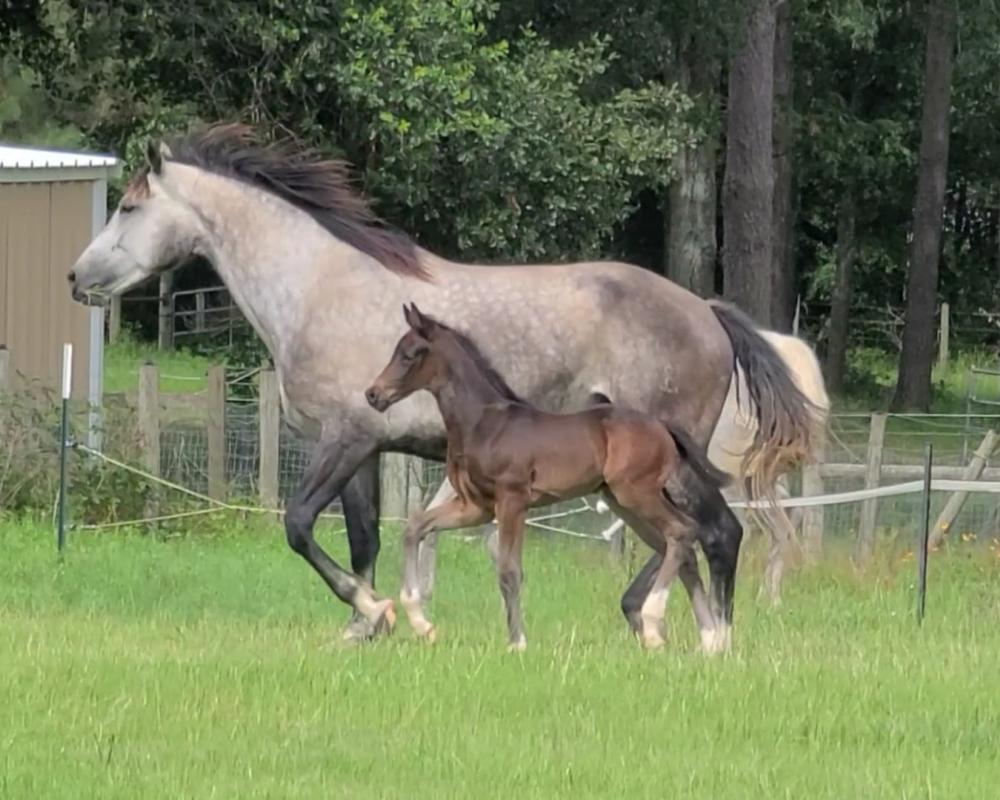 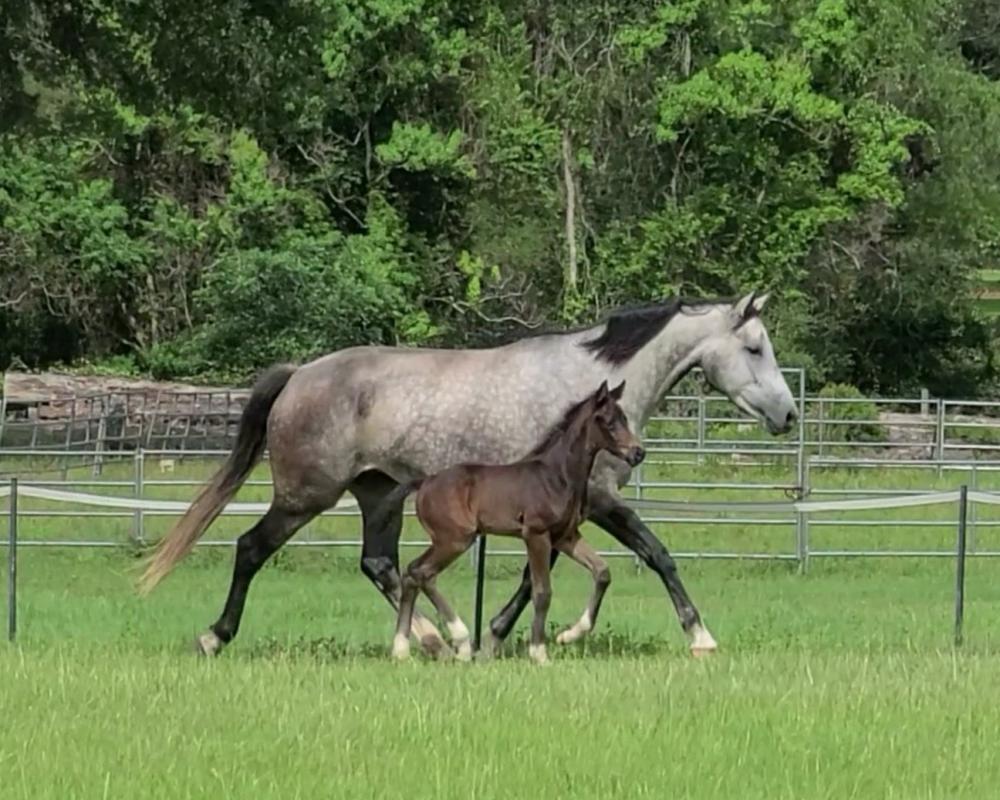 With dressage royalty on both sides of the pedigree, this guy is destined for greatness! He has exquisite movement, a cute jump, with sweet and inquisitive personality that loves to explore. He already baths, leads, and trailers.

Louie's sire Louisvlle HTF is a product of the Lord Leatherdale-Negro cross that has proven an exceptional nick. Stallions such as Everdale, Glamourdale, and Chippendale have highlighted the success in both breeding and sport for this pedigree combination and Louisville has his own unique strengths to earn his place as stallion. Louisville’s sire, Lord Leatherdale, is a successful FEI horse bringing in the best of Westfalen breeding lines. His sire Lord Loxley was a Bundeschampionat winner and Silver Medalist at the World Young Horse Championships. His dam, Fairless P, has been an exceptional producer with three approved sons and two approved grandsons to her record. Lord Leatherdale himself has proven to carry on this strong family record and has sired PAVO Cup winners, Young Horse World Champions, and CDI Grand Prix horses. Louisville’s dam had a very successful competition career that included the USEF Intermediaire Championships and she made her Grand Prix debut by age eight. As a producer, she has already given us an inspection Site Champion, Dressage at Devon winners, a USDFBC Finals Champion, and a licensed stallion. Her sire Negro hardly needs an introduction as he is one of the most proven sires worldwide for his record of Grand Prix offspring, including the Olympic and World Champion Valegro.

Louie's dam it a tall elegant mare with good bone and a workhorse disposition. She is by the up and coming young grand prix stallion Qredit who is scoring in the 70's with Michael Bragdell. Qredit has been Grand Champion of Dressage at Devon, Champion of his 70-Day Stallion Test (earning ten scores of 9 or higher), Reserve Champion of the USEF Four-Year-Old National Championships, is a 2x USDF Horse of the Year winner and has won many USDF All-Breeds titles. Qredit was Champion at the US Dressage Finals at Intermediate II and Reserve Champion at Grand Prix. His pedigree is packed with Grand Prix dressage horses and includes jumping blood to offer versatility.