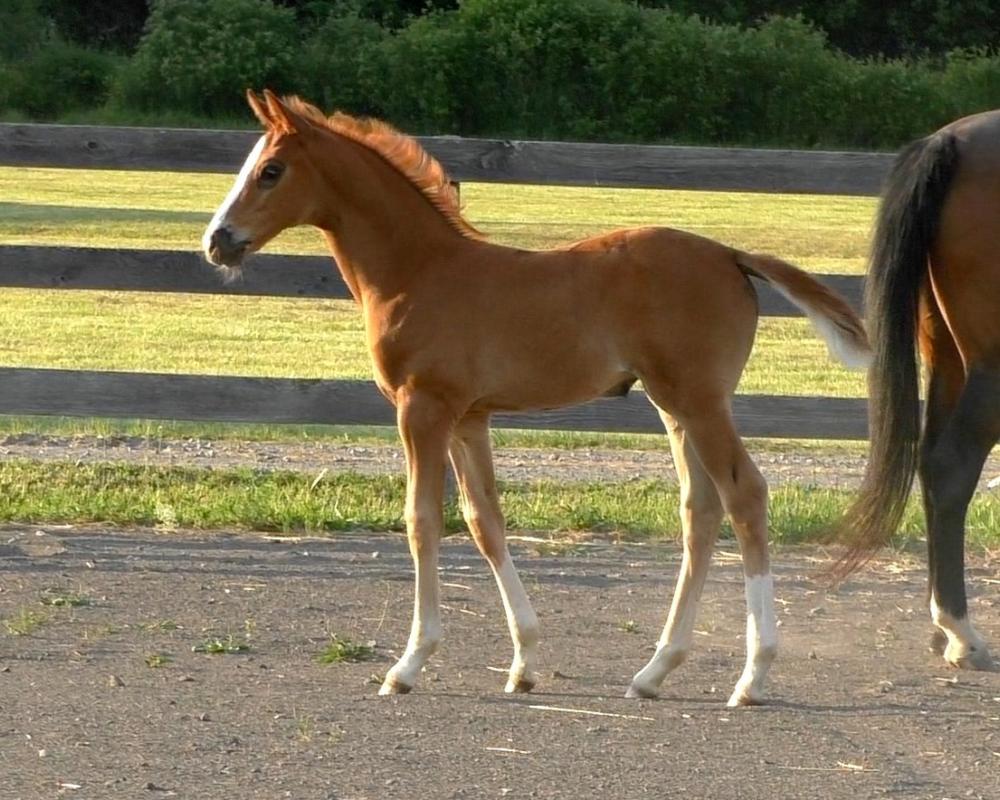 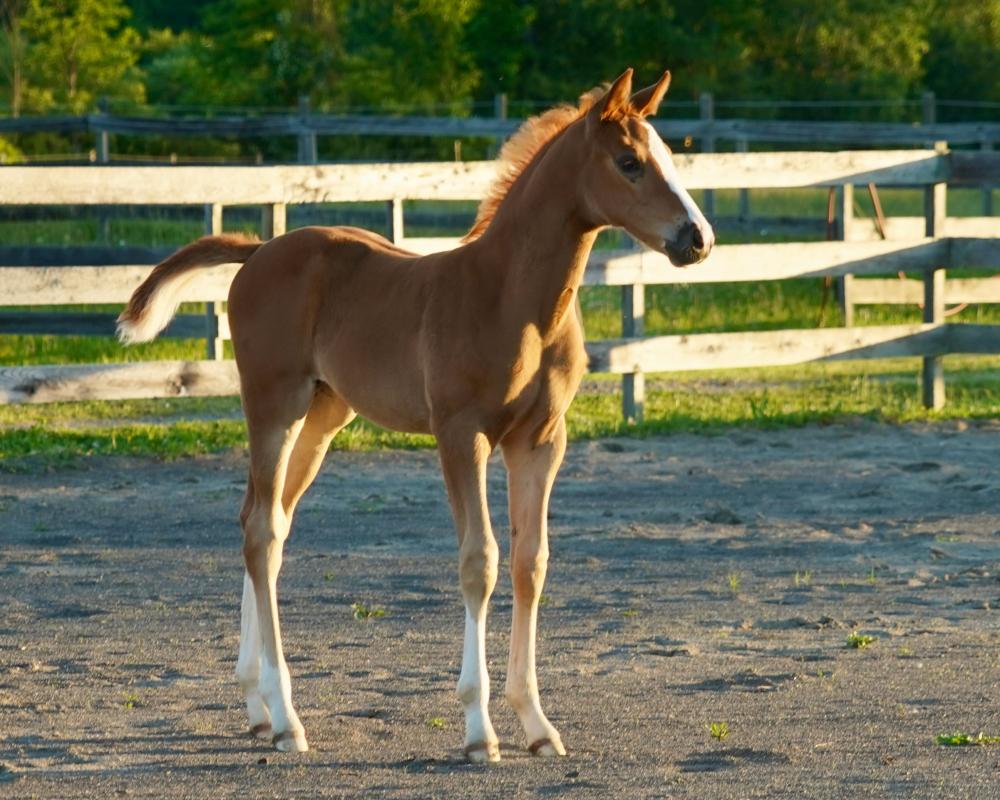 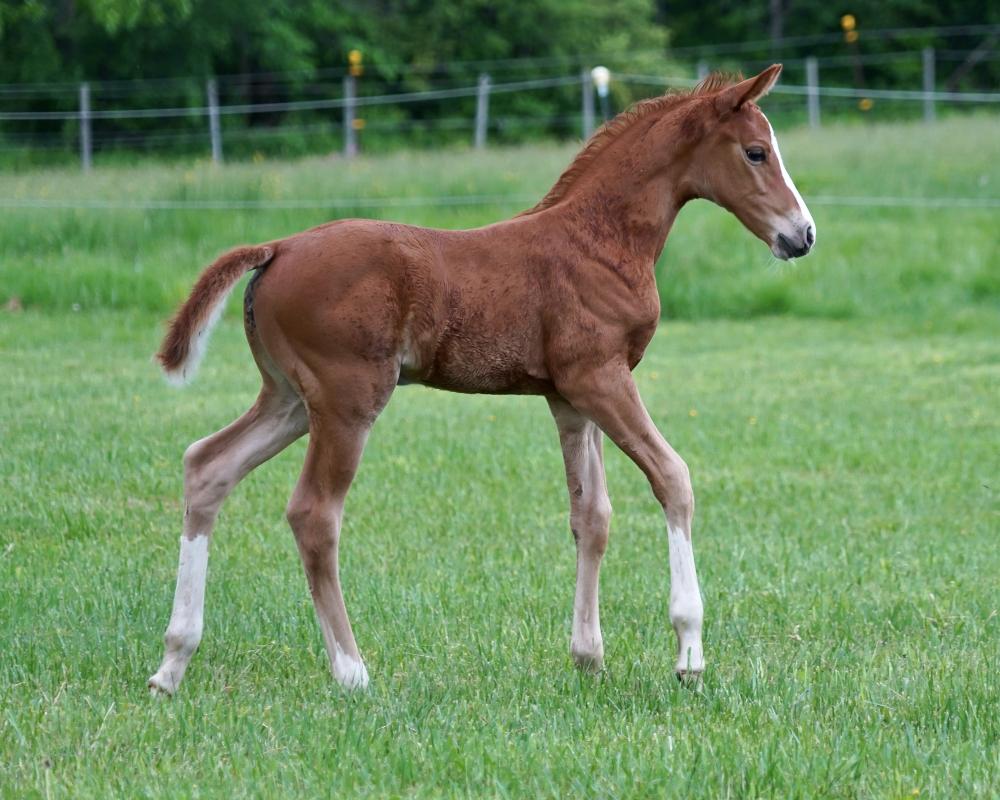 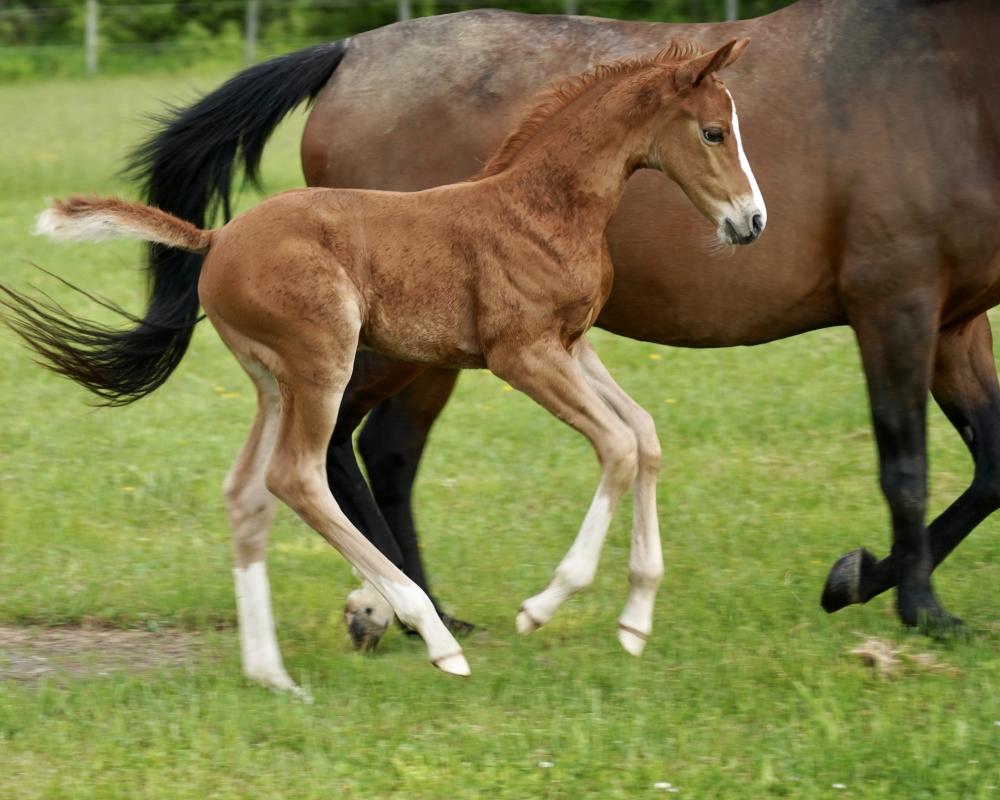 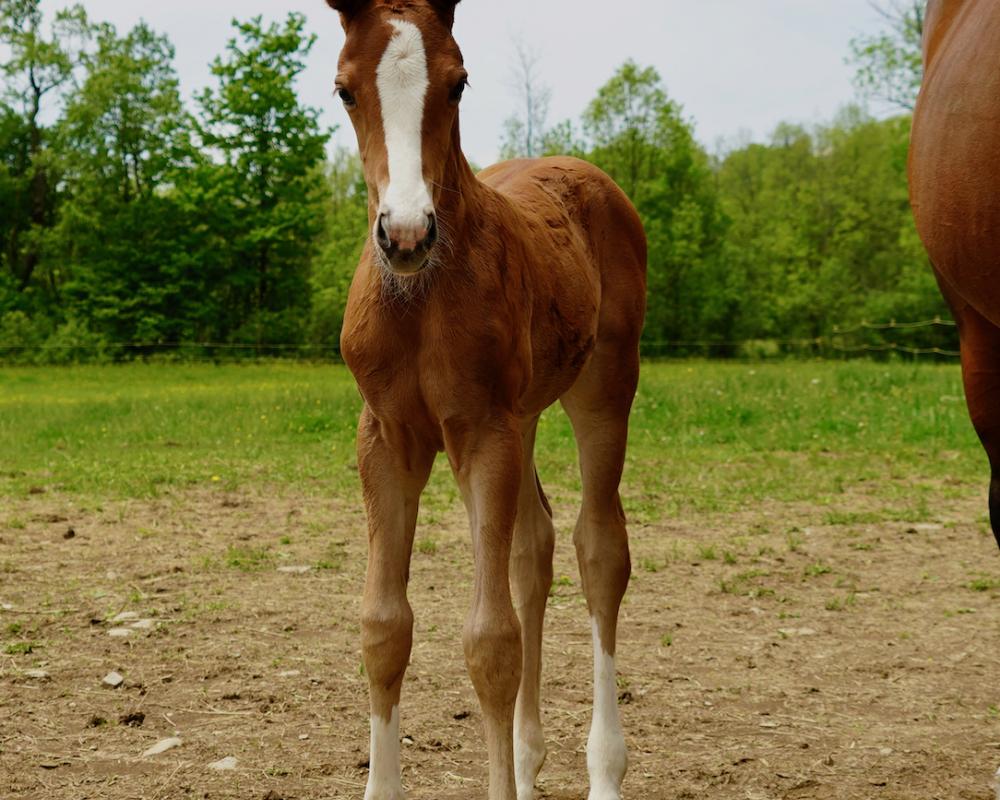 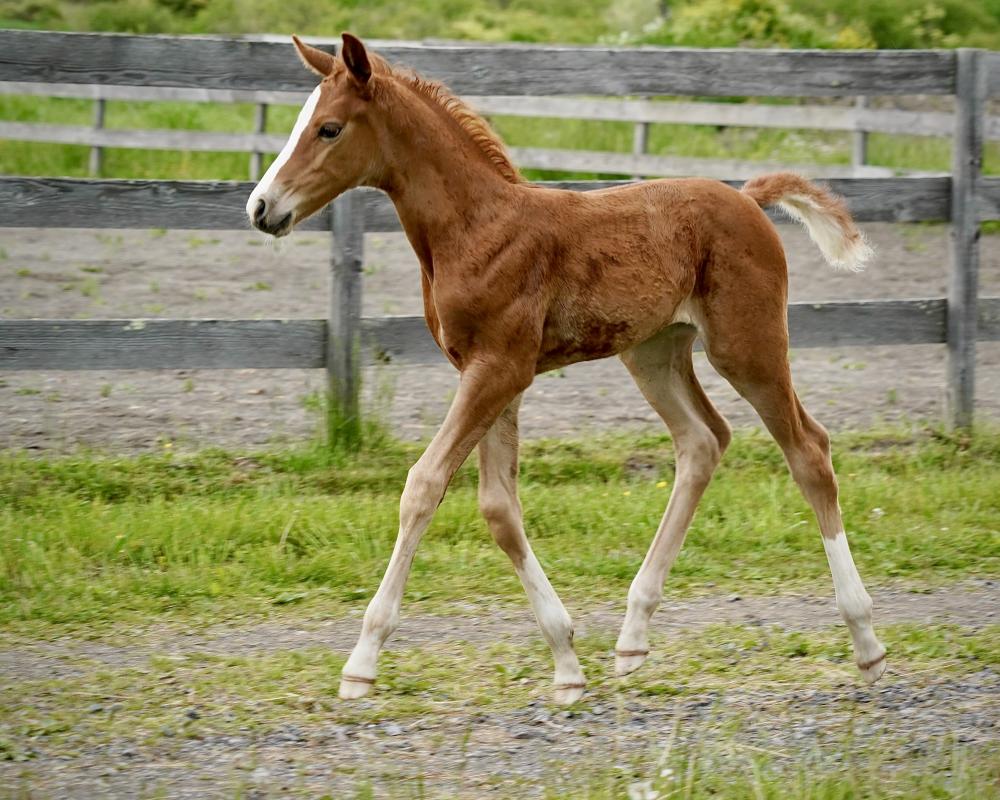 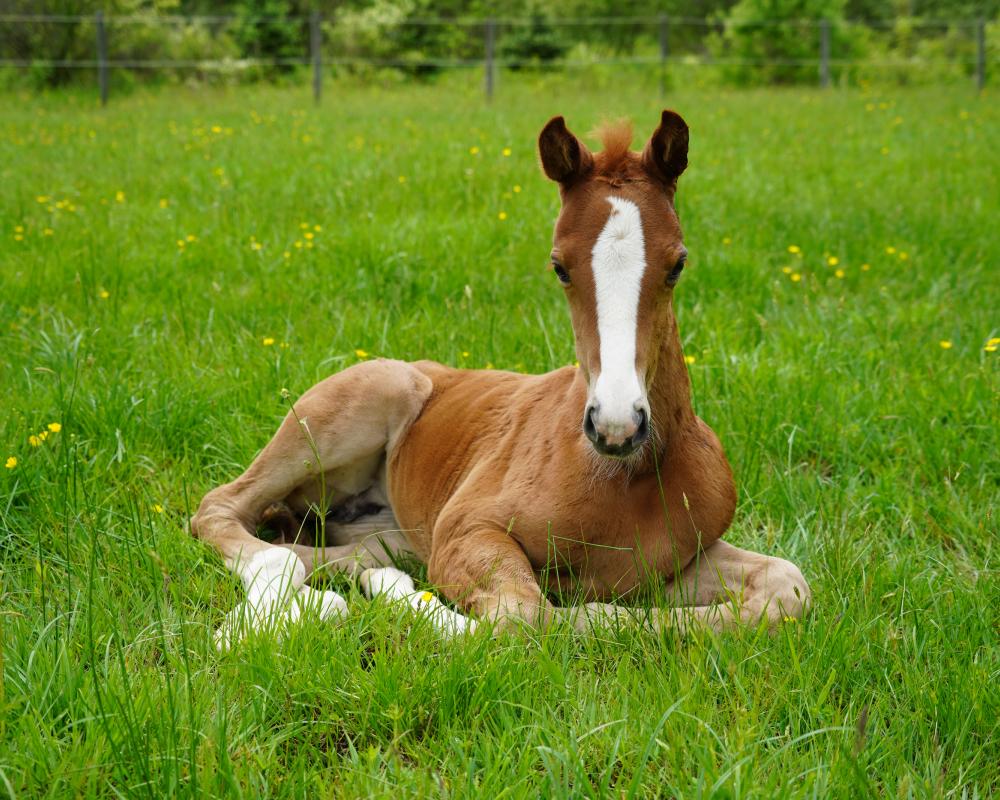 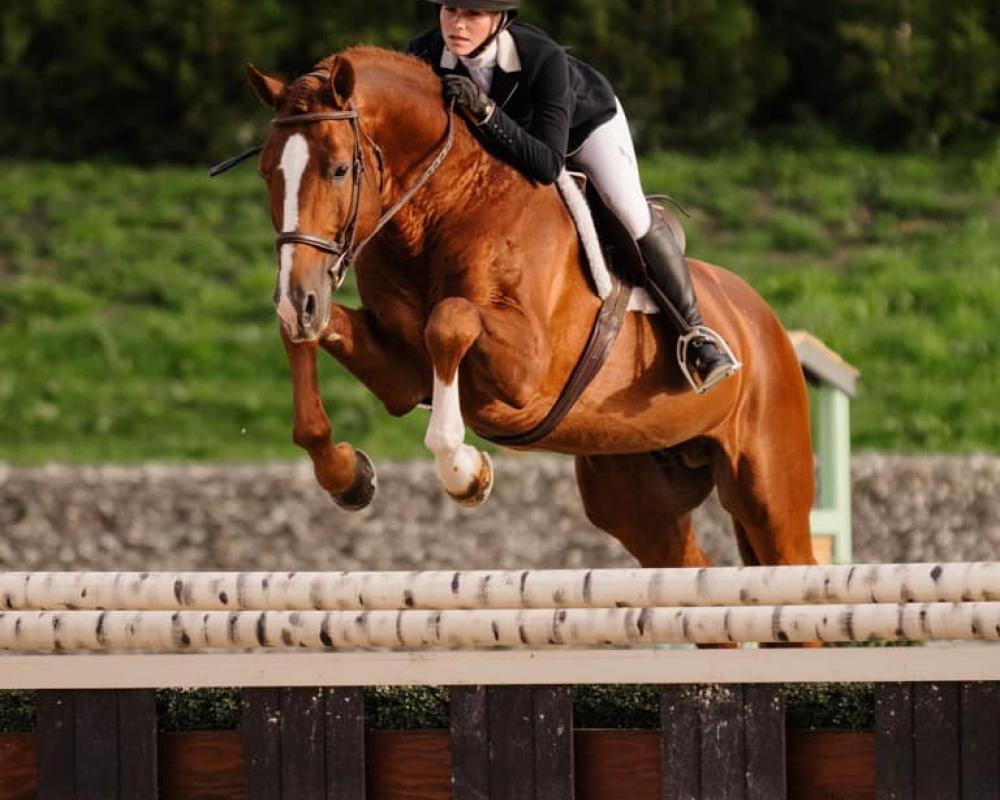 Super hunter/jumper/eventing prospect - dam is half sister to Theodore O'Connor, sired by Fleetwater Opposition. Will NOT be giant - expect to mature 15.2-16.1 hands.

Stunning filly born during the lunar eclipse, she is a knock out! Sire of this foal is the imported chestnut Hanoverian stallion Light My Fire, owned by Dreamscape Farm in Canada. He is being actively shown and winning in hunters. Through his damline, Light My Fire brings together two top jumping lines of Stakkato and the great Argentinus. Light My Fire was champion of his 2015 70 day stallion test at Neustadt Dosse with the excellent scores of 137 in the jumping phase and 125 in the dressage phase. He has excellent rideability, character, kind temperament, and 3 very good gaits. In 2016 he won the prestigious Stakkato Prize as one of the top young Hanoverian jumping Stallions. His offspring have shown lovely type, good movement, ability over fences as well as being very good minded and very willing.

Dam is sired by Trakehner stallion Fleetwater Opposition. Famous sire of Olympic eventers Yarlands Summersong (4th Atlanta, stallion) and Opposition Buzz (London, also gold medalist at WEG [Kentucky] and bronze medalist at European Championships). In addition, he is the sire of stallion Future Illusion. Fleetwater Opposition won the Junior European Three Day Event, individual and team gold medals when he was six years old. He was fourth in the Spillers Dressage and Jumping finals at Wembley. Fleetwater Opposition went from Elementary to Advanced Dressage in two seasons where he excelled by winning and being placed in every competition that he competed in up to Grand Prix. Fleetwater Opposition also received the British Breeding Lifetime Achievement Award and Trakehner Breeders Fraternity Lifetime Achievement Award. Connaught (this filly's dam) is also a half sibling to Advanced level eventer and Pan-Am Games gold medalist Theodore O'Connor. They share the same dam, Chelsea's Melody.

Filly will be registered and branded Westfalen.