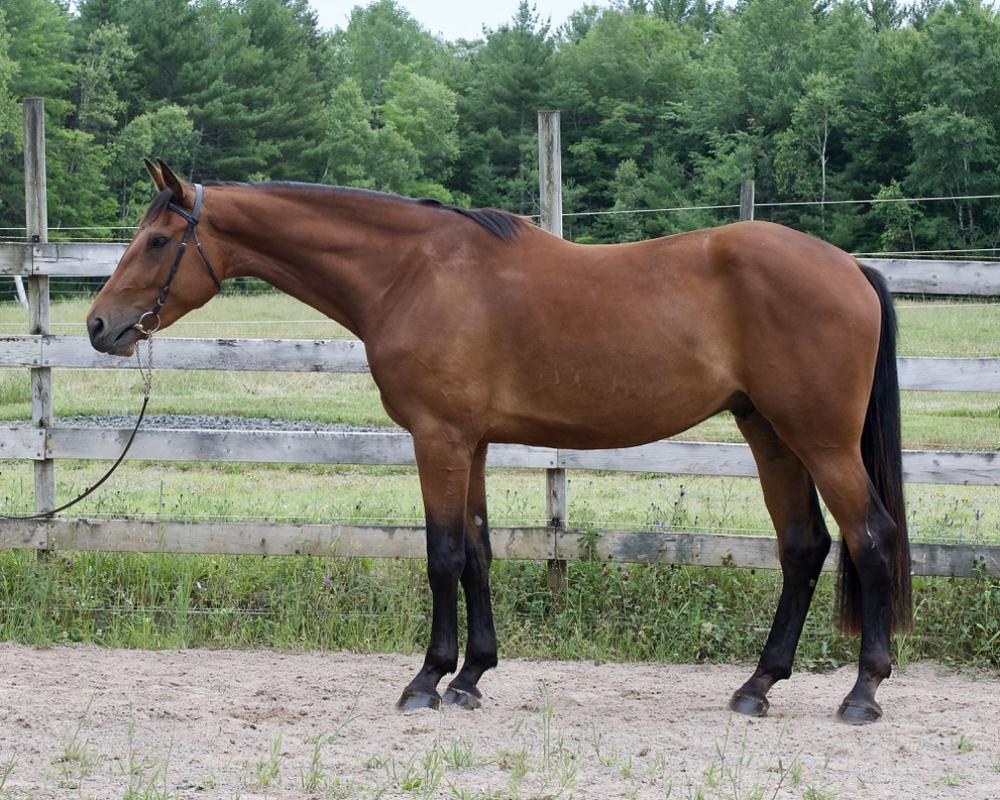 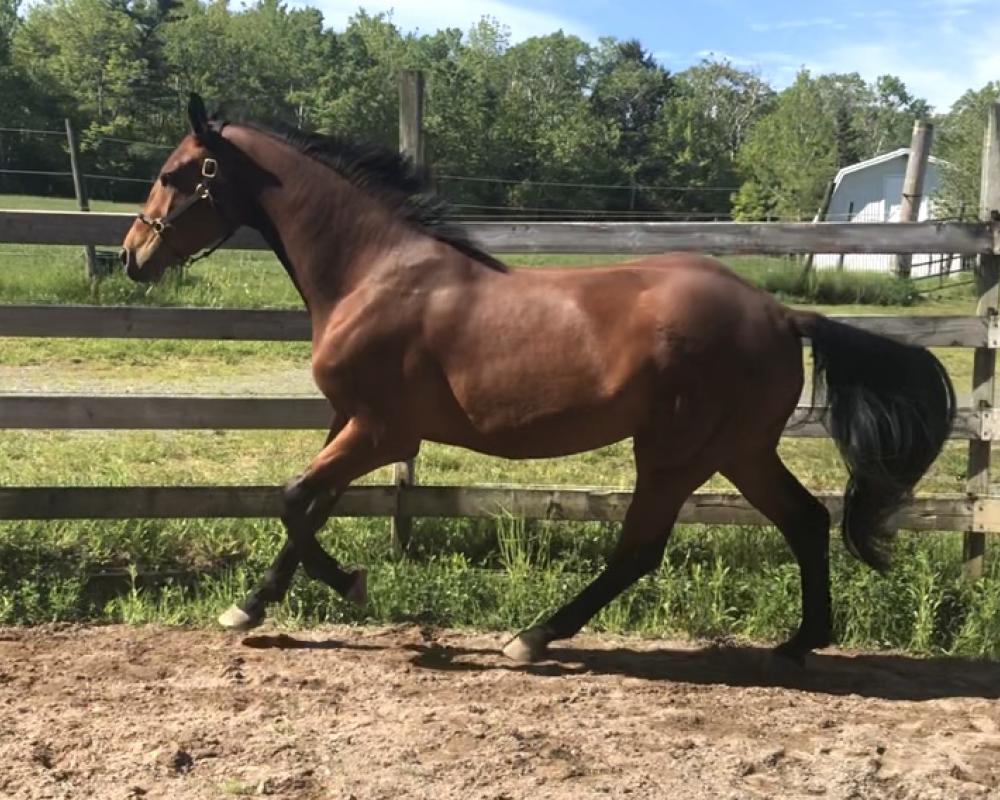 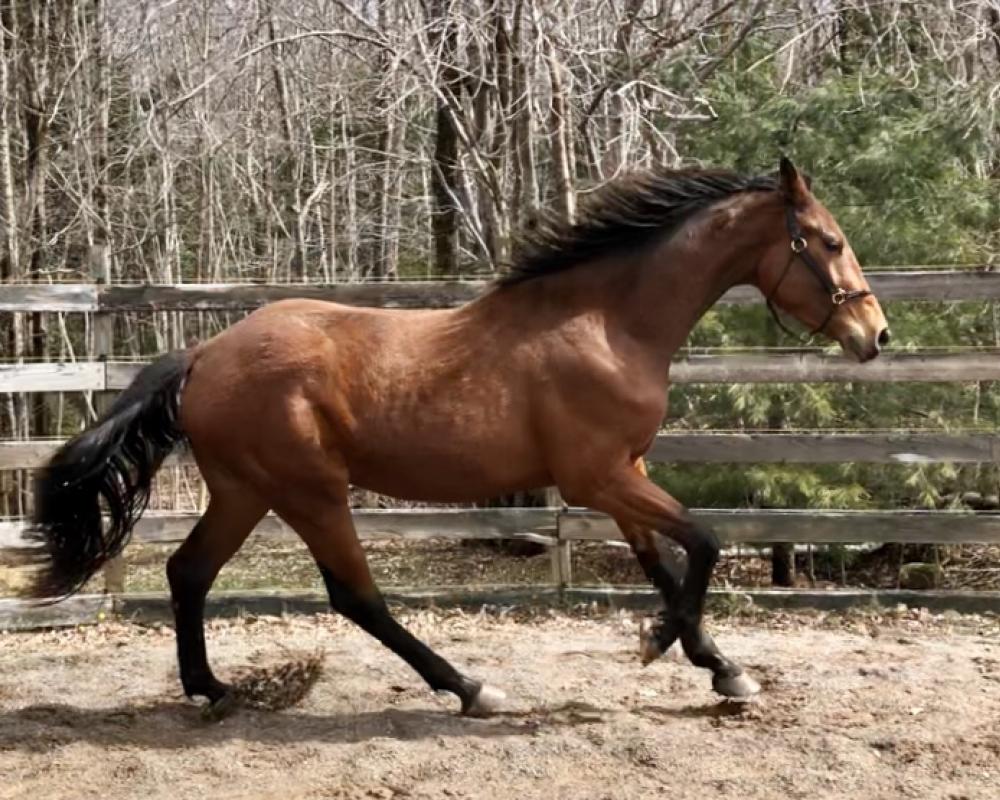 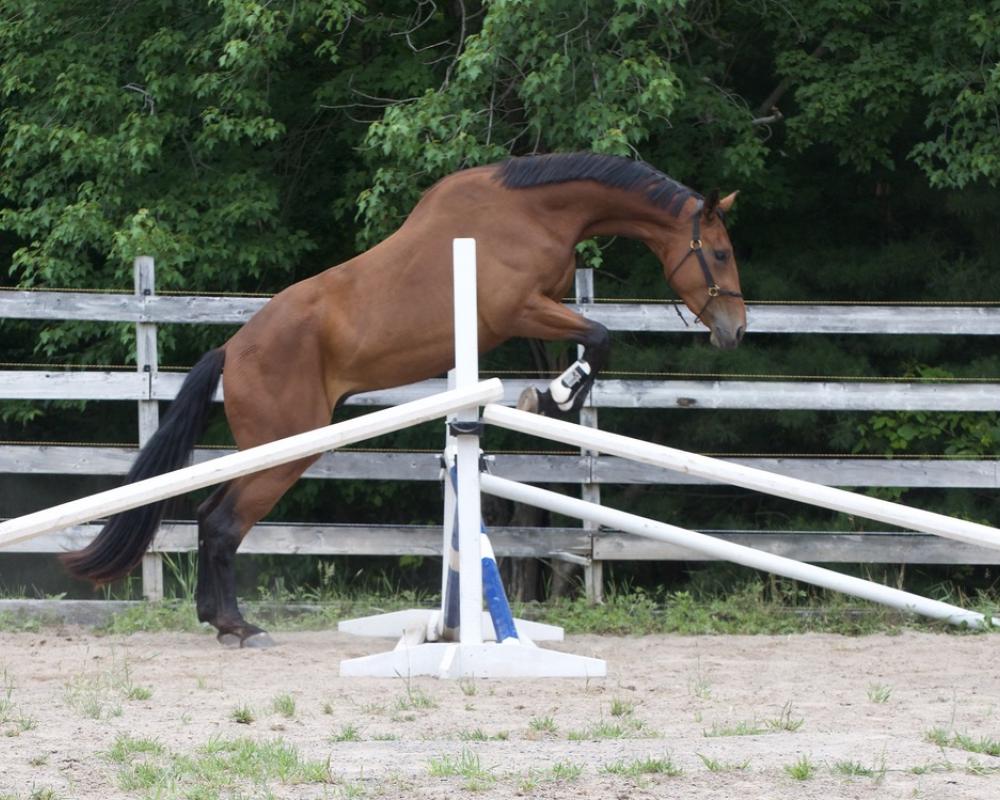 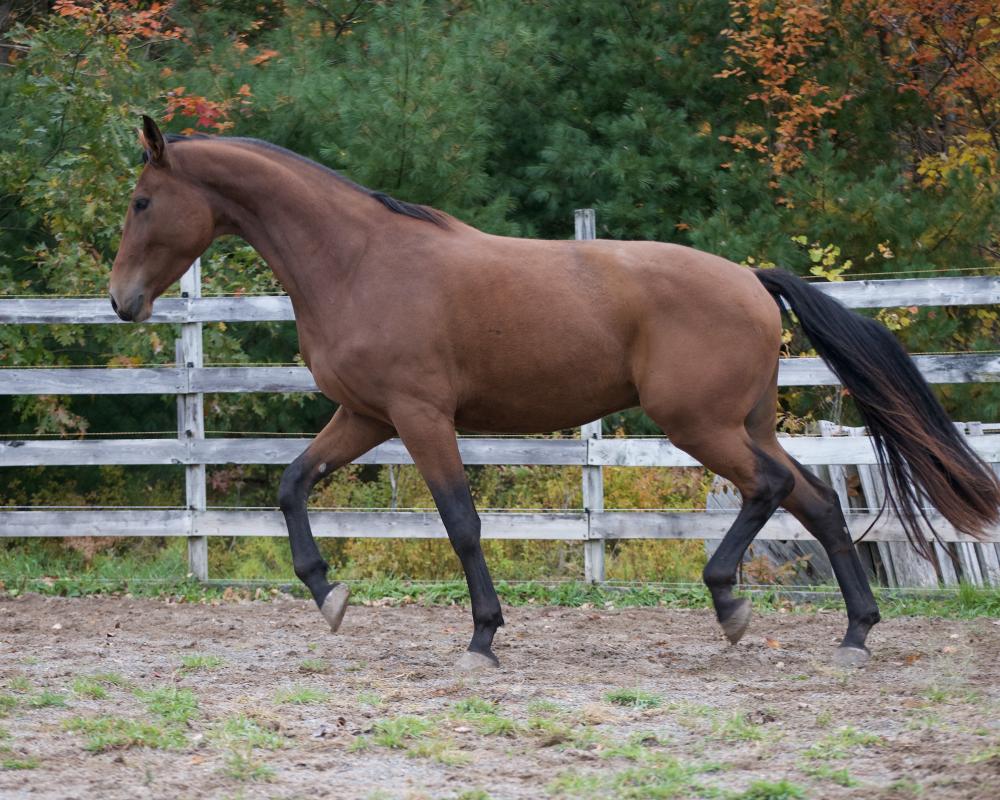 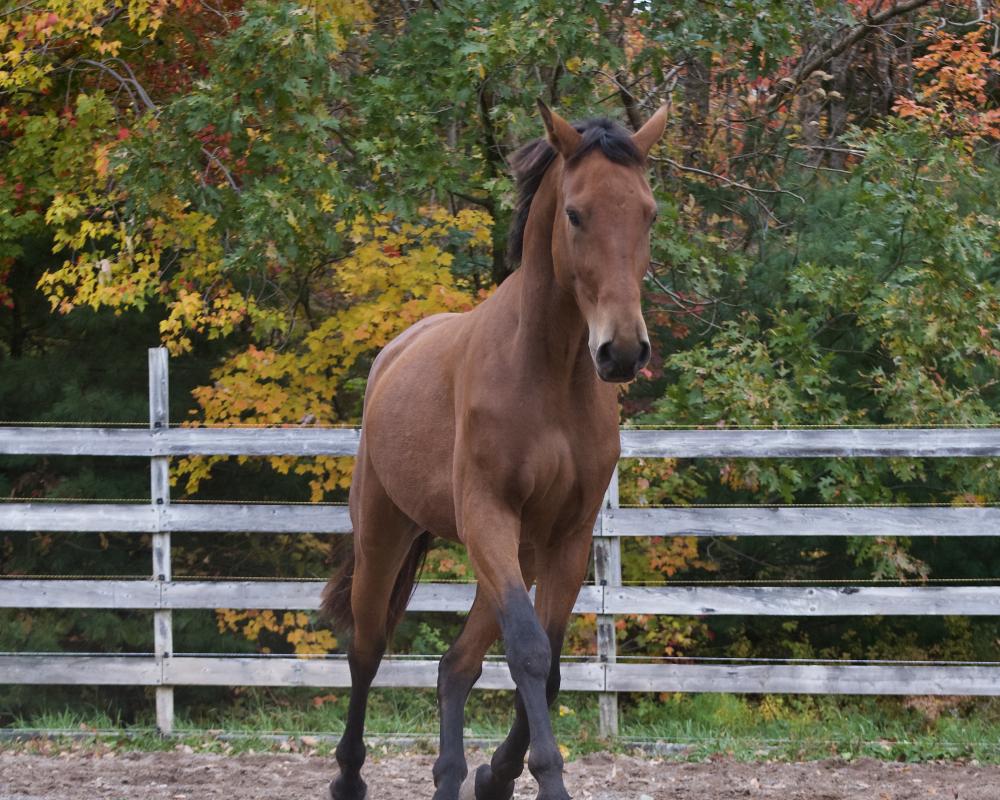 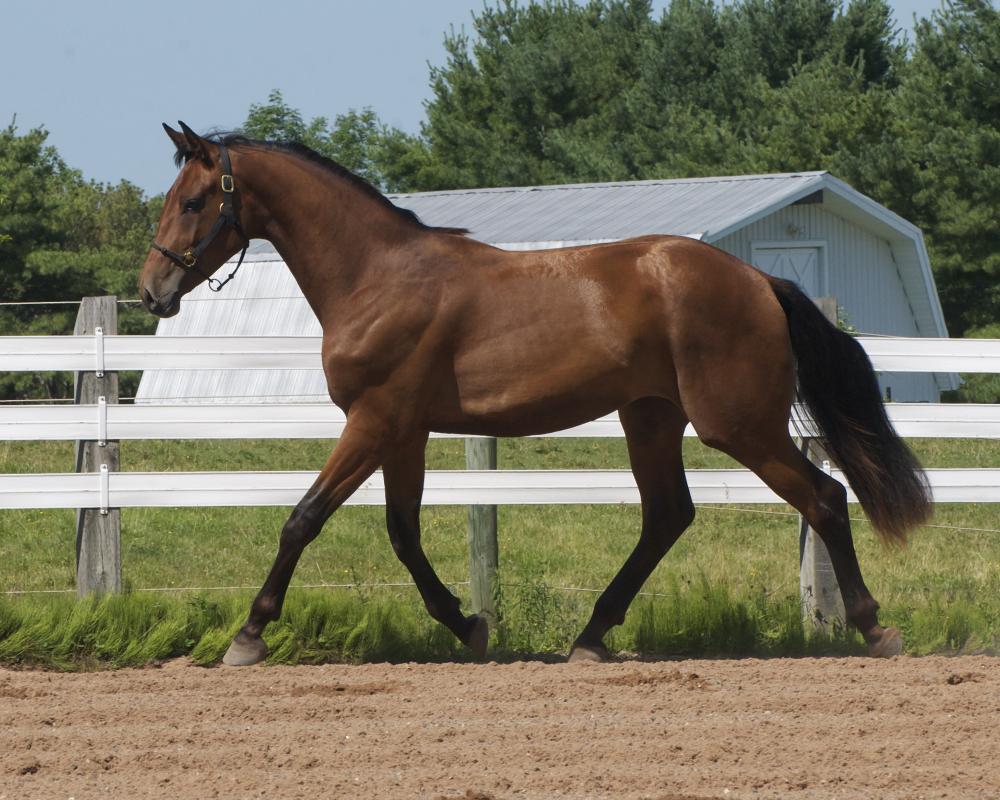 Maestro NSN, foaled June 15, 2017, is a tall bay gelding. Maestro has very good rectangular type, with a long neck, good loin connection, sloping shoulder, powerful hind leg and expressive front leg. He is very friendly and bold. As a 3 year-old, Maestro’s quality is showing through in his suppleness, elasticity, power, and correctness of gaits. As he becomes more muscled, his suspension will only improve. This gelding is expected to mature at least 17.3hh. He is currently 17.2hh. His large, uniform feet are of excellent quality, with a thick hoof wall and sole. He has never been shod.

Maestro’s sire, Soprano (Sandro Hit – Contender), has proven himself as a sire of both upper level dressage horses and event horses. SOPRANO, now deceased, was a striking, modern type, homozygous black premium Oldenburg stallion with proven world class performance bloodlines inherent in his pedigree. His movement exhibited activity, suspension, and elasticity. SOPRANO was a beautiful type with very correct conformation and excellent feet. SOPRANO completed his 70-Day Test in Neustadt Dosse, Germany finishing 12th out of 46 stallions and was the first stallion by SANDRO HIT to be approved in Denmark.
SOPRANO's pedigree exhibits great depth and versatility. His sire, the legendary 1999 World Young Horse Champion and Bundeschampianate SANDRO HIT, passes on to his progeny the genes of numerous influential sires. SANDRO HIT's sire, SANDRO SONG, a double graded champion in Oldenburg, is by SANDRO, an international show jumper who won the Danish Derby ridden by Franke Sloothaak. WELT AS, in SANDRO HIT's third generation, is famous for siring Anke Van Grunsven's Olympic Dressage Champion Bonfire and many other top horses.
SOPRANO's damsire, the legendary CONTENDER, who won his 100 day test, is one of the most significant sires in Germany. CONTENDER's progeny are characterized by outstanding jumping ability, very good movement, and excellent rideability. SOPRANO's mare line (The Flattopia) produced many international stars such as dressage horse Rubioso ridden by Ellen Bontje; Lord Kem (Champion Stallion in 1989); Continue; Maffay; Calmiro; and Farmer.
Also found on SOPRANO's damside is TIN ROCCO, who won ten conformation tests as a three year old and competed in Grand Prix jumping winning the Preis Von Blankenesse in Hamburg/Klein Flottbek (Derby Show). Of TIN ROCO's approved sons, Traumtïnzer won the stallion performance test in the USA and Torero was his best winning dressage horse in 1990. His highly awarded St. Pr. daughter Gutena represented him successfully at the German show in Verden in 1990. His son Tie Break was in the finals of the 1988 German Show Jumping Championships and in 1990, he won a test at the German event horse championships. In the 1990 FN breeding statistics TIN ROCCO leads as the most successful sire of event horses of his age group.
TIN ROCCO's sire, TIN ROD XX, was an English TB of large frame and excellent movement. He produced approved stallions and very valuable mares including the dam of Landlord (Olympic horse 1988) and Lausbub (international show jumper).
Soprano's foals are modern in type inheriting his beauty, elegance, elastic movement, correct conformation, outstanding temperament, athleticism, and dark color. Soprano has been a very consistent producer of top offspring in Sweden, Denmark, Germany,Australia and United States. Soprano (by Sandro Hit) has had three offspring qualify and compete for Denmark at the World Championships for Young Horses. He produced the highest scoring mare at the World Championships in 2010. This year, Soprano has one offspring in Denmark who has made it to the qualifying finals for the 2012 World Championships for Young Dressage Horses. He also has a young offspring who went to the Swedish National Championships.

Maestro’s dam, Rhumba is a Ster and D-OC (genetic testing for OCD) KWPN-NA mare, who has produced multiple First Premium foals, “Top Five” and “Sport Predicate” horses, and an Elite mare. At 20 years in 2018, she had her final foal by her side before being retired from breeding. She still has very clean legs and is riding sound. Rhumba’s daughter, Hadiya NSN by Sir Gregory, started competing 3rd level dressage as a 6 year-old, scoring into the mid-70’s. At 7, Hadiya placed 7th, 3rd level, at the USDF Nationals. She is schooling Prix St George.

Rhumba’s dam, Never Say Never (aka. Winnie) is by Wanroij out of Talk of Gold, an Approved Thoroughbred mare by the KWPN (when thoroughbreds were still being inspected). At her 2002 NA/WPN keuring, Winnie was awarded the coveted Keur Predicate, at the age of 7, after displaying her rideability in a successful IBOP and presenting not one, but three consecutive 1st Premium offspring! Winnie's talent for jumping was noted by the jury. She received high marks for her carefulness, technique, and scope, scoring 8's for technique and jumping talent, and an 8.5 for scope. The jury commented that she was an easy horse to ride with a good attitude.
Winnie was 9th in the"Top Ten" list for the 2002 NA/WPN keuring tour for her free jumping. She placed an impressive 5th place in the "Top Ten" for her IBOP (both dressage and jumping) competing against many "imports"!
At her very first show, a hunter primary, Winnie was champion of the 3'6" division.
In 2004, Never Say Never completed the requirements for her "Preferent" predicate, at only 9 years of age!. Ulysses, by Ferro, and Tango, by Idocus, were the second and third of the required 3 Ster quality offspring to be presented at their studbook inspections. Rhumba, Ster, also by Idocus, was presented in 2002. Winnie made this feat seem easy, considering she produced three consecutive Ster predicate offspring, from 2 sires. Not only this, but her first grandchild, Versailles (Orame x Idocus, ster) was also awarded her First Premium as a foal. Versailles went on to earn her Elite predicate as a four year-old.
At the time of her untimely death in 2016, Never Say Never was still riding sound. There has been no known incidence of OCD in this mareline.

Maestro has no health or lameness issues. No vices. He has been handled daily, stands on crossties for the farrier. He is lifetime registered with the USEF and microchipped.