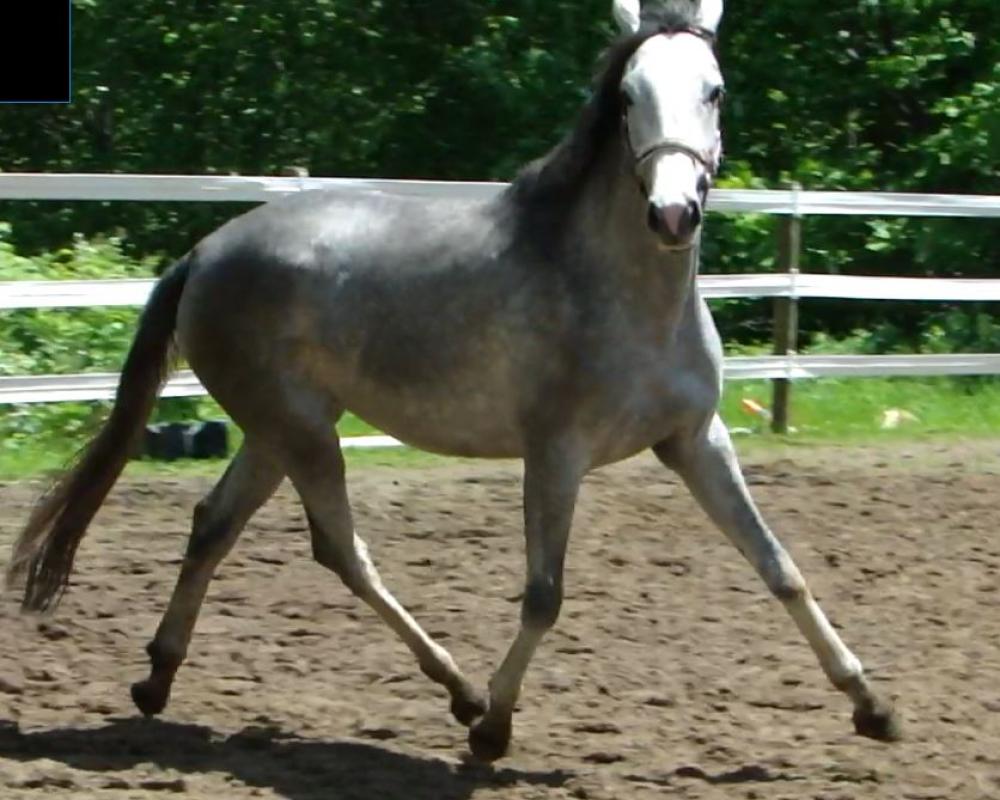 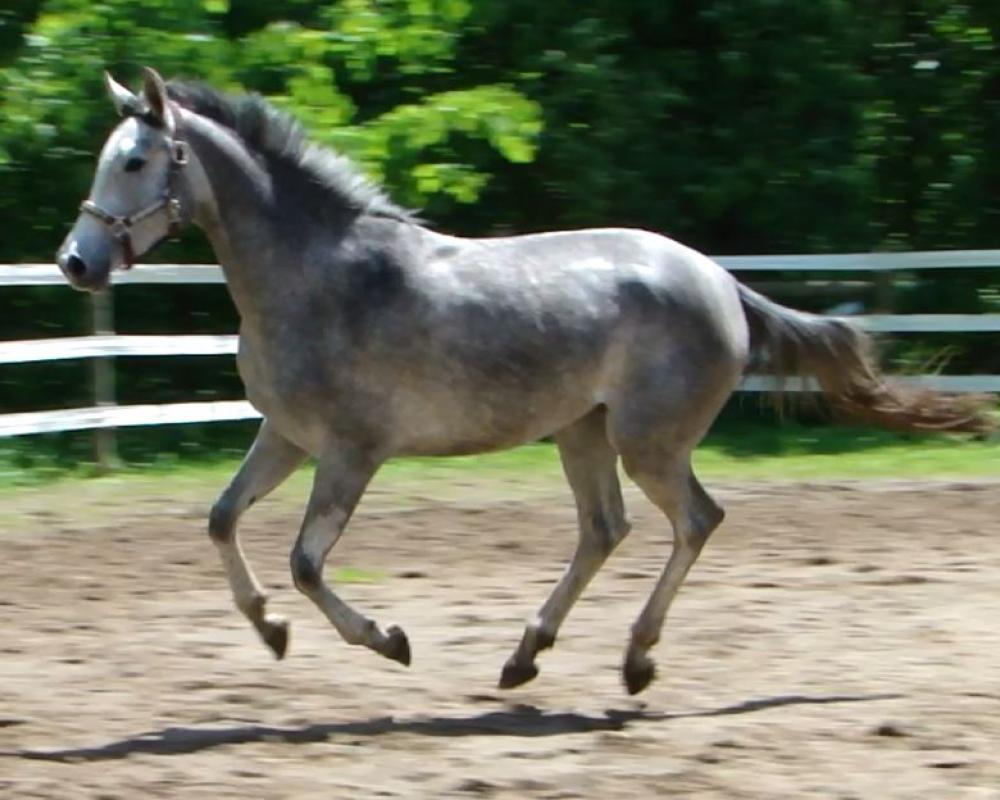 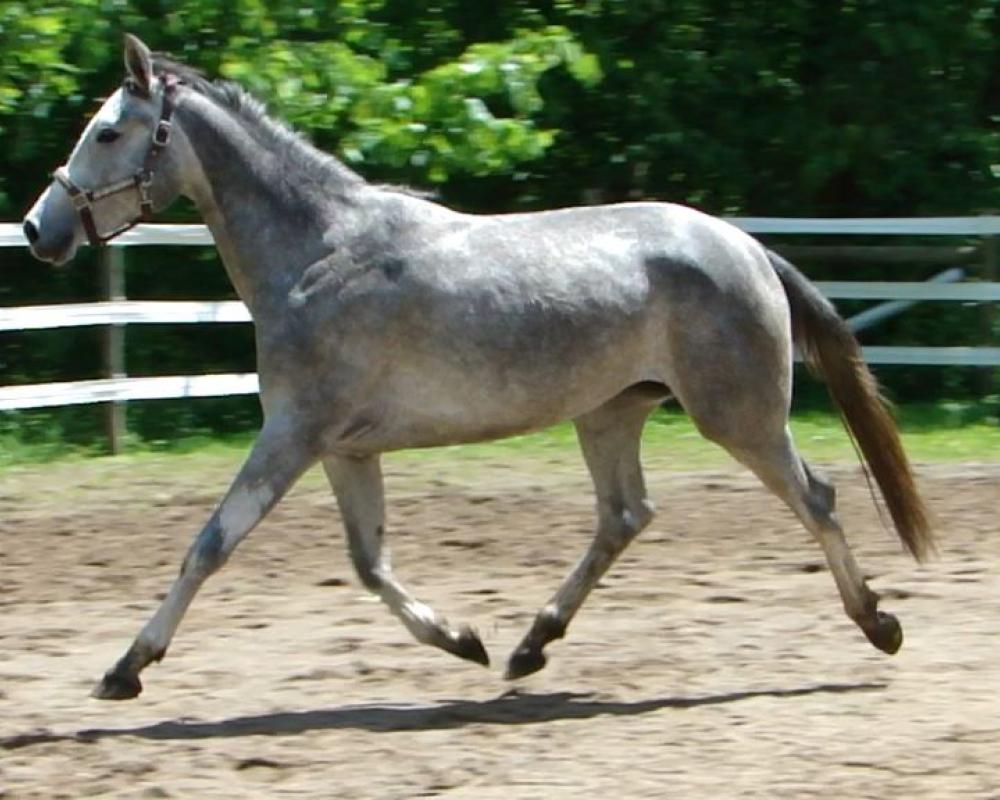 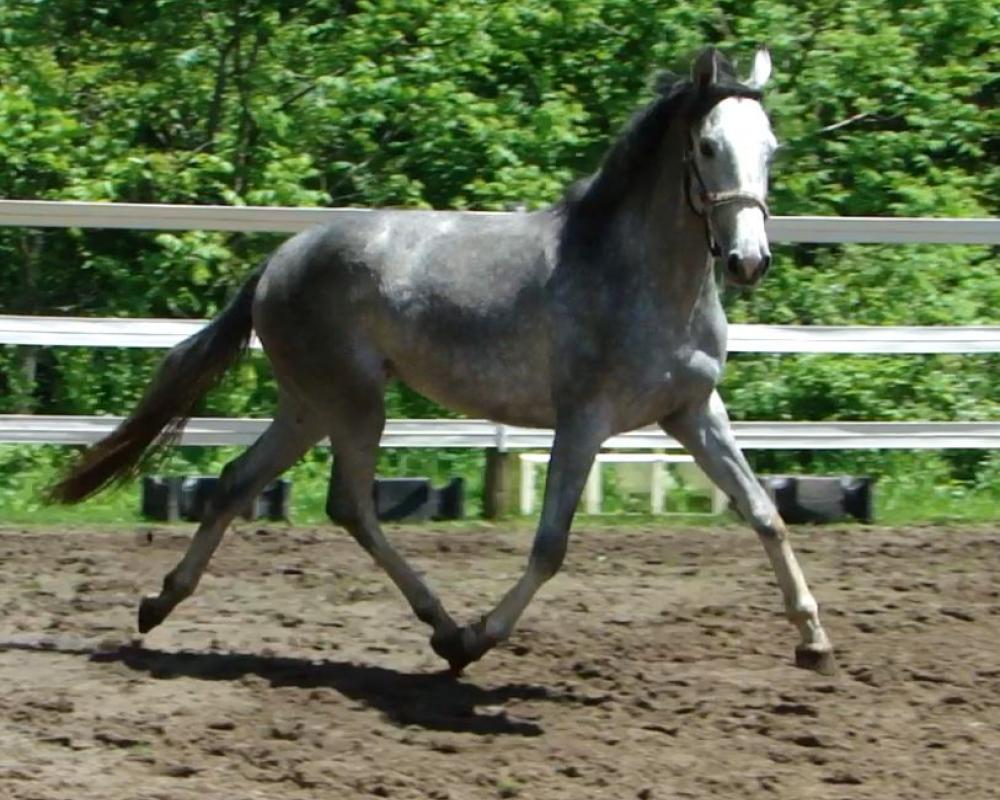 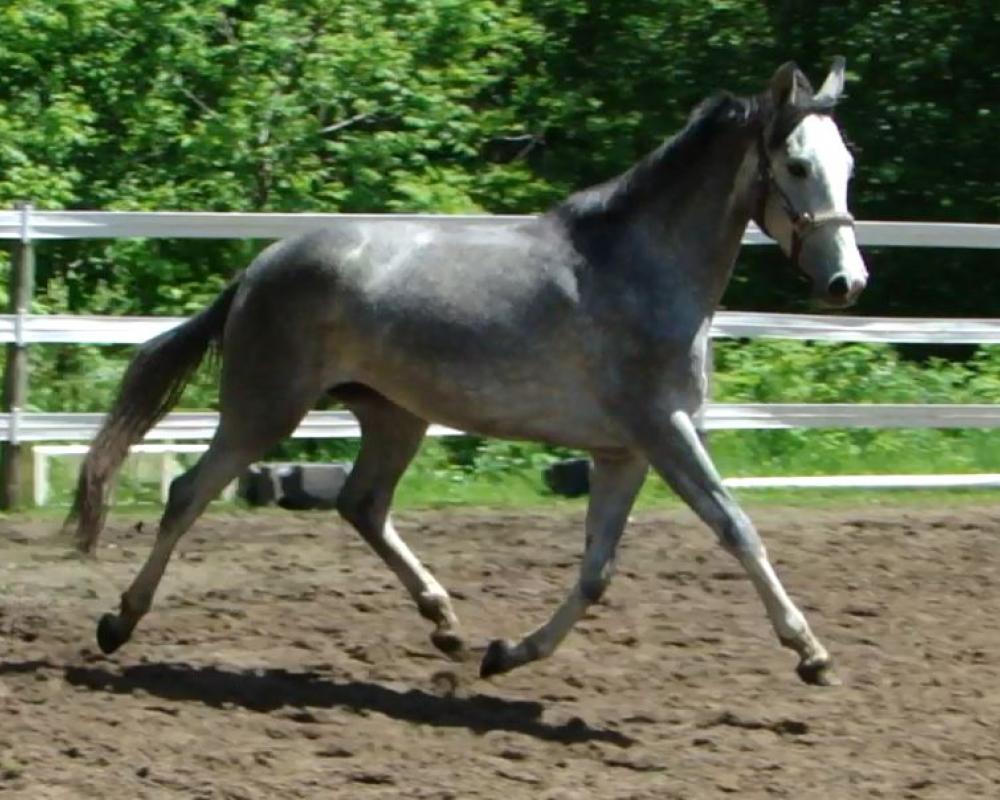 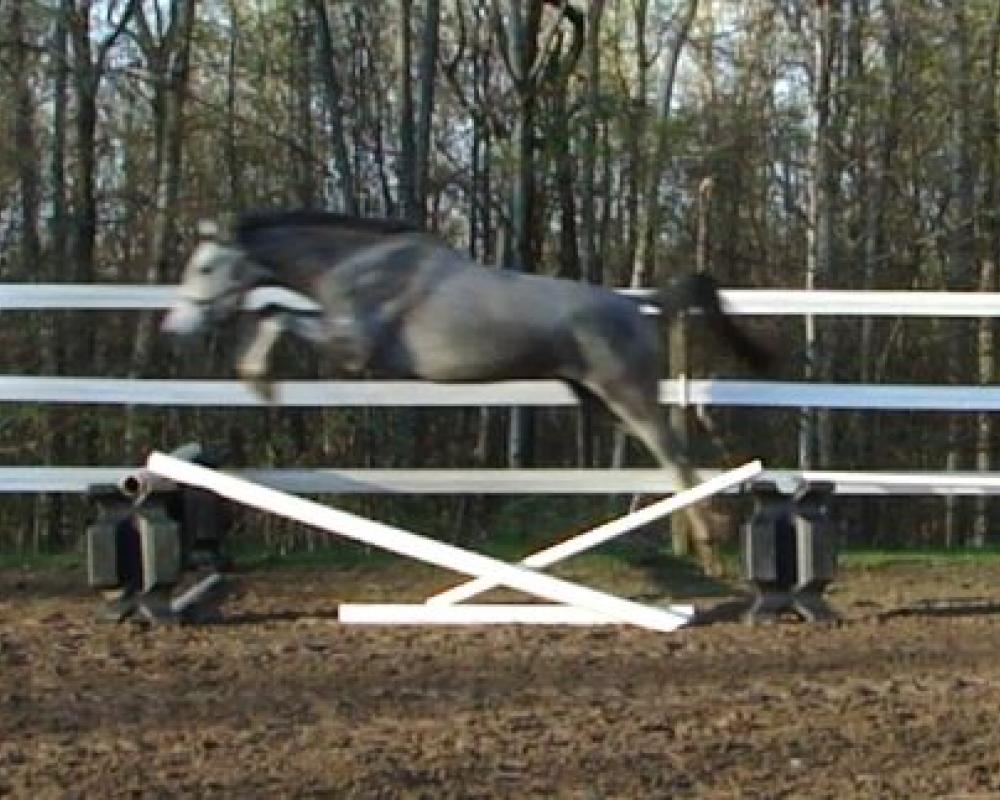 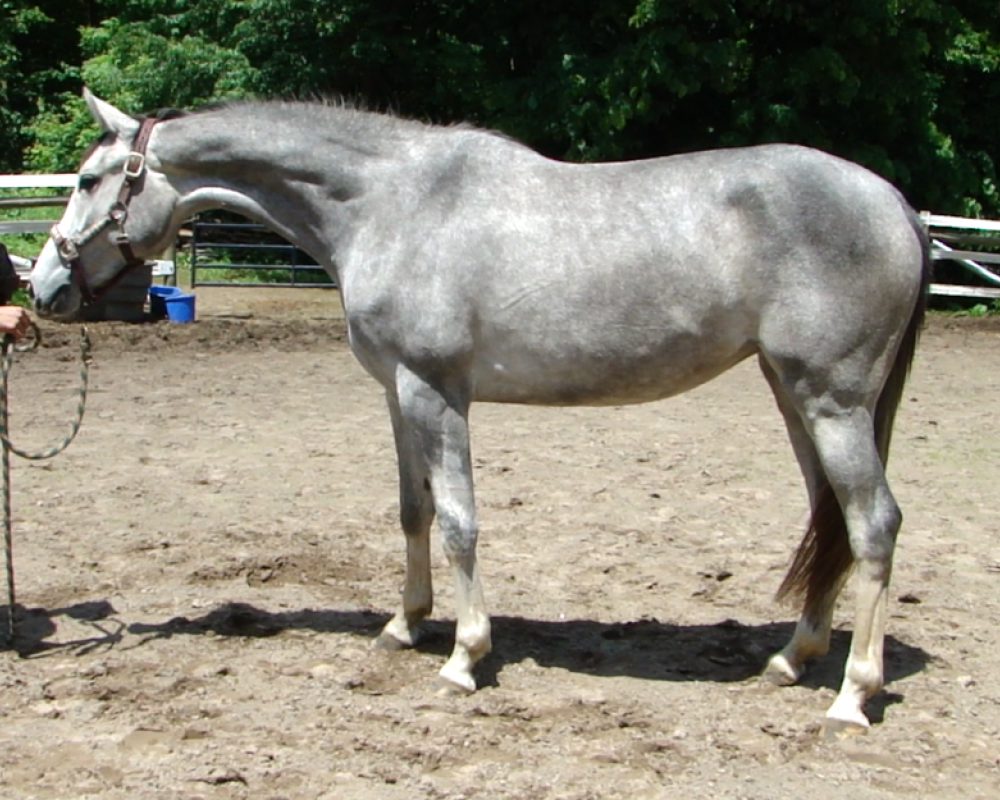 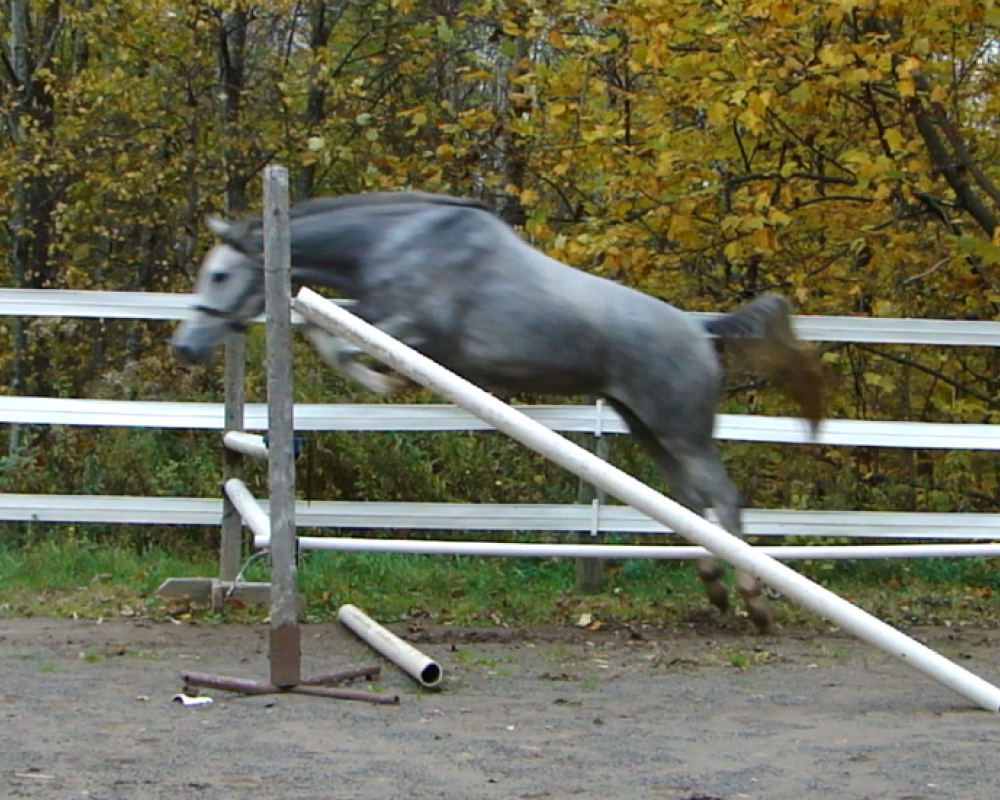 2017 KWPN filly. Grey with 4 high stockings and a full blaze! Mischa is a super correct filly with a very feminine head, long legs and compact, uphill build, making her perfect to be your next top of the line jumper prospect!She is the most lovable foal to boot!
Her dam is KWPN mare, Zakarla.(Navarone x Telstar x Joost) from the famous Karla line. Zakarla's sire Navarone (Olympic Jus de Pomme x Armstrong) has proven himself in Grand Prix Dressage and also jumped to 4'6" and back into jumping again. His oldest offspring are winning internationally in Grand Prix jumping and Eventing. A truly all around talented sire who throws the best temperament you can get! Super jumpers and Zakarla is no exception.
Zakarla dam Amarens Ster (Telstar x Joost) has produced Grand Prix jumpers. She comes from the famous Karla mare line in Holland that has produced many top international horses, approved stallions and top mares. Amarens was bred by Bauke Lodewijks who was a protege for Weipke van de Lageweg of the famous VDL Stud in Holland. Amarens dam Oecarla is a full sister to the mare Picarla "keur prest" and Oecarla is also Keur Preferent Prestatie. Oecarla is the highest rating a dam can have. Picarla produced the the mare Acarla, Acarla is the dam to Mr. Blue. From Amarens famous mother line comes the stallions Mr. Blue, Nubuur and Transvaal. We also find the “pref” stallion JOOST who has left behind a huge number of jumping talents like, VIP, Ommen, Attent Zb, Satchmo and Jonggor II.
Her sire is the 16.3 hand imported KWPN stallion, Toronto.​Toronto, an Elite Stallion with the Hanoverian Verband, is a Dutch stallion acquired by the Celle State Stud to further the jumping talent of the breeding program. His performance test single score in jumping was 9.3. This powerful bay stallion descends from the jumping horse producer “Now or Never M,” who is stationed in Holland. Toronto's grandsire is the prepotent Voltaire, a consistent sire of international jumpers with temperaments of gold. The damline is also very interesting - Toronto's damsire is Belisar by Saros xx, who is a full brother to Swazi xx, the sire of the Trakehner stallion Consul.