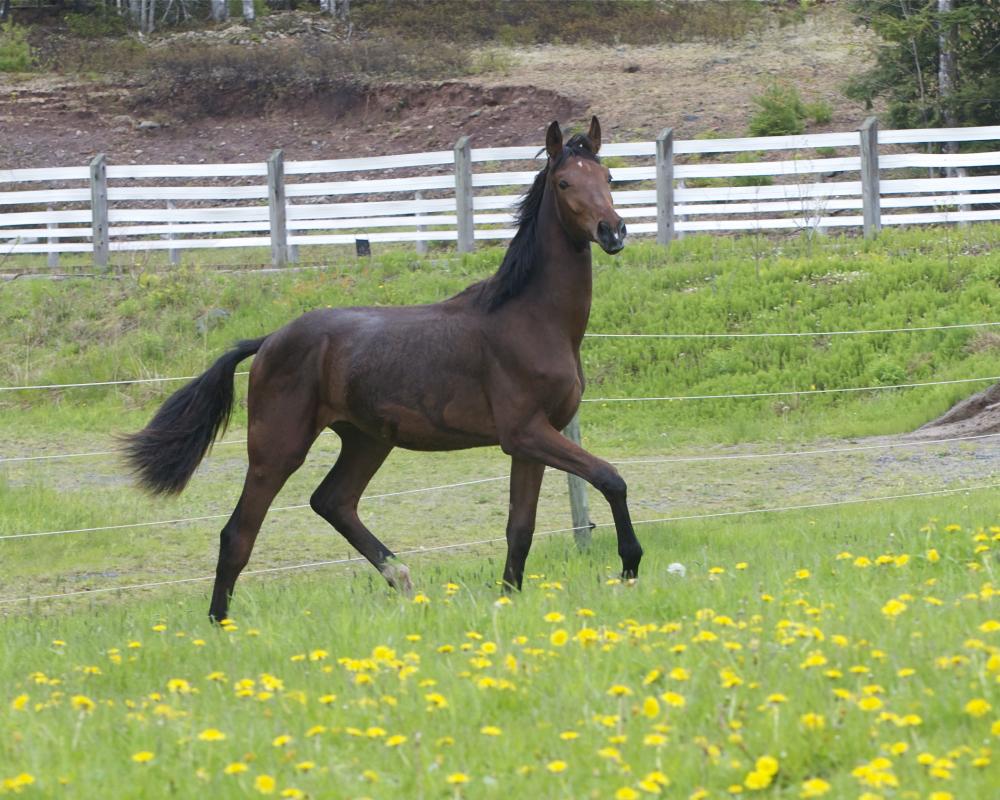 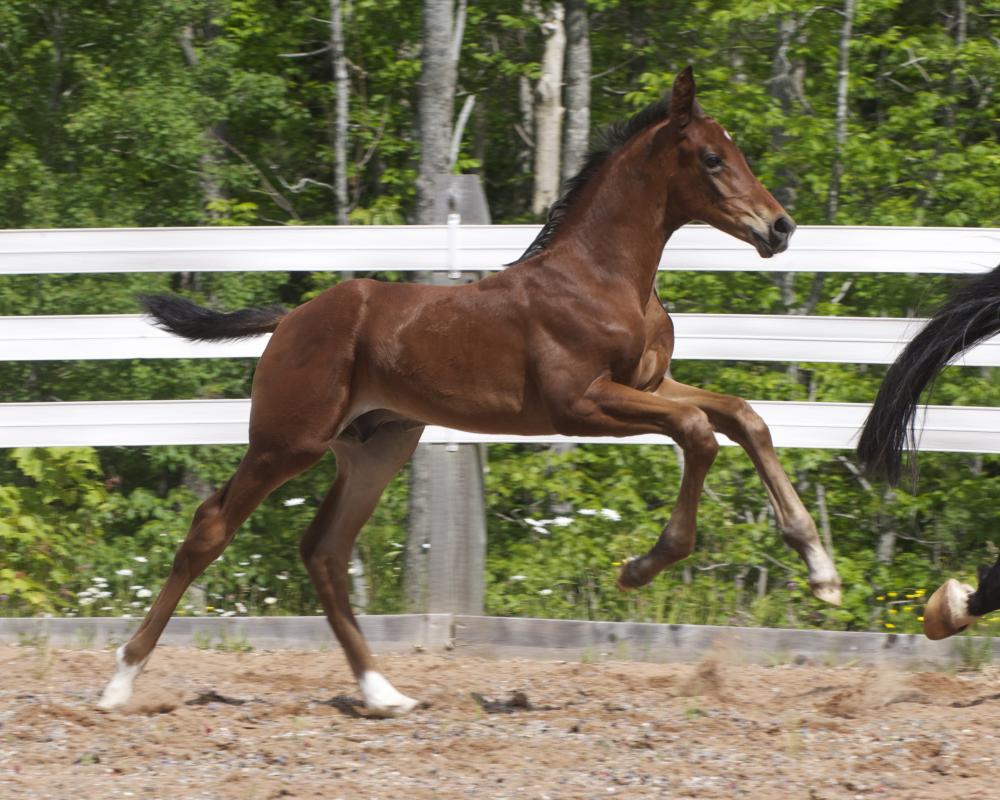 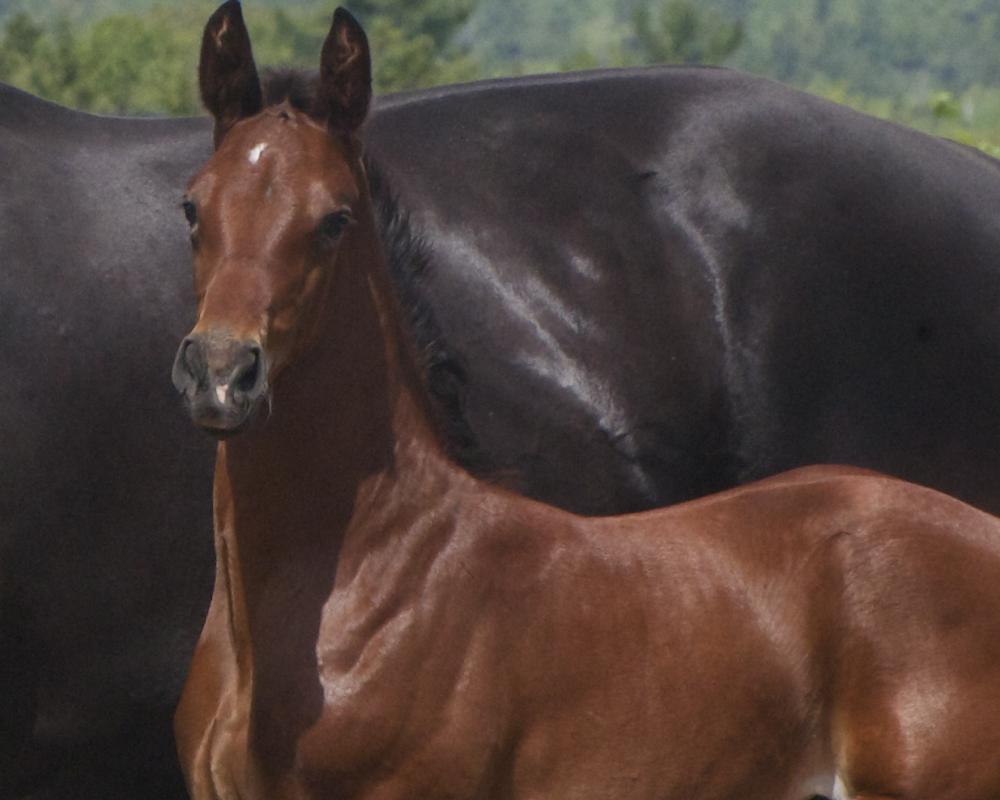 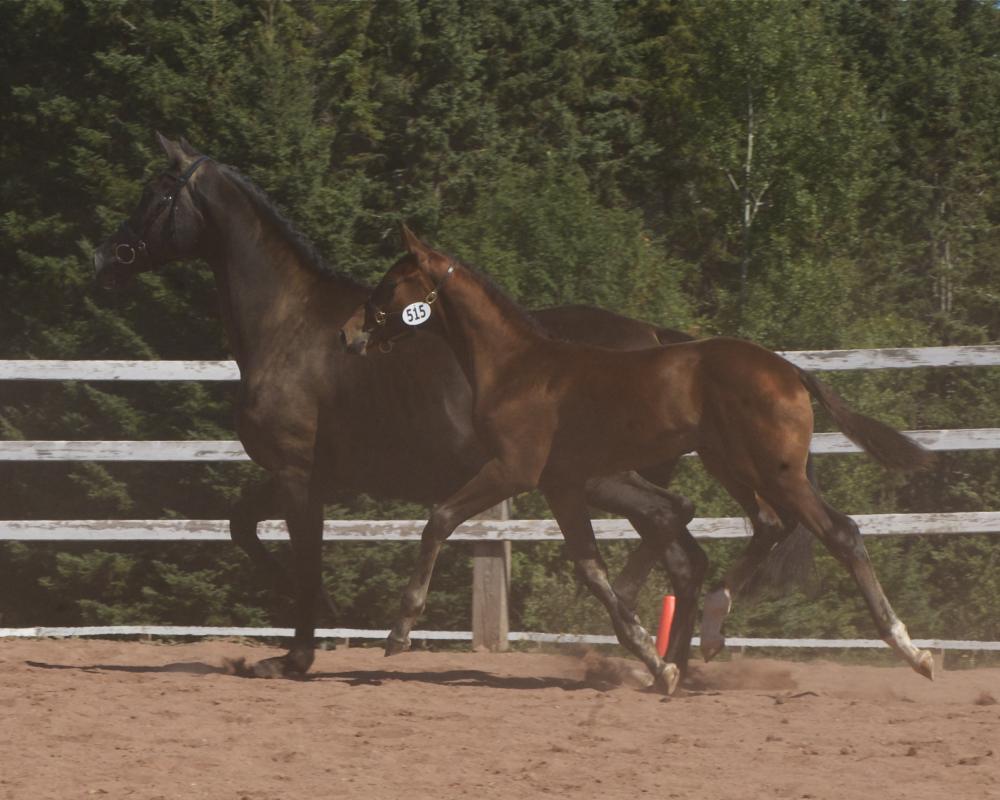 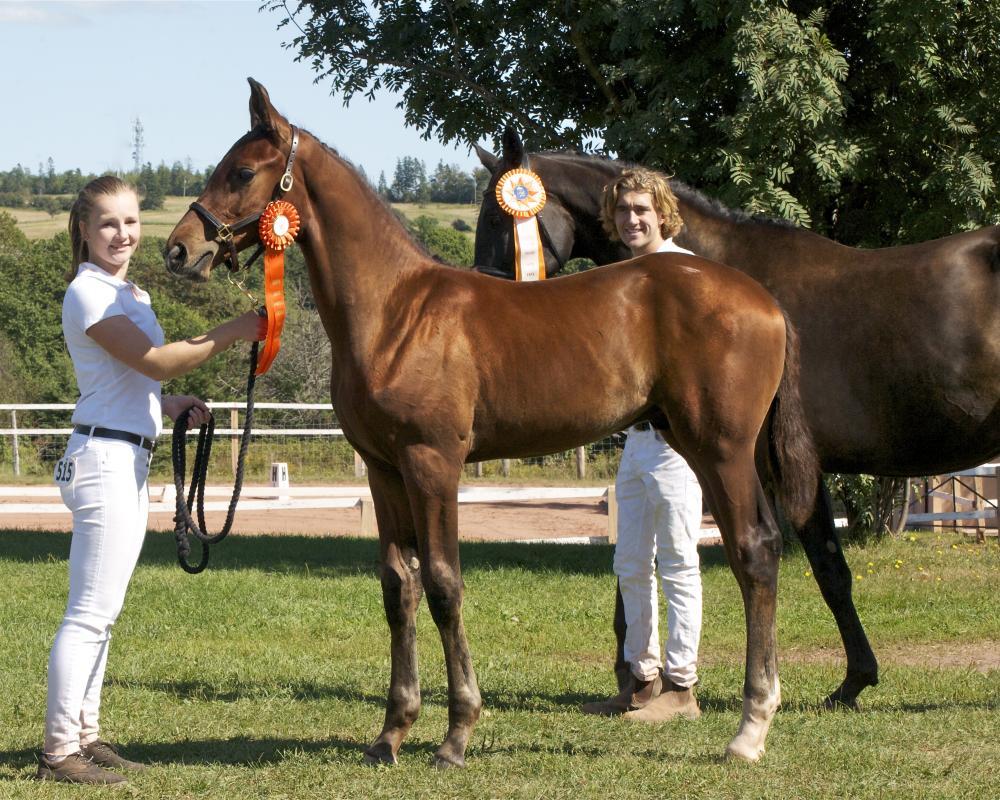 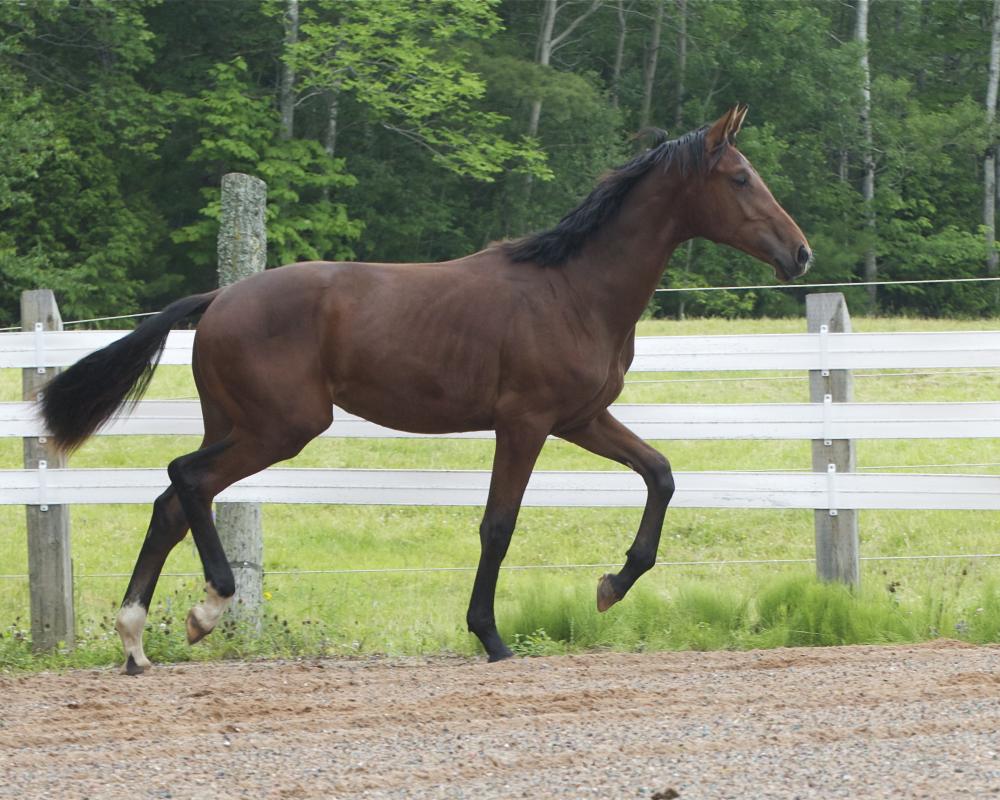 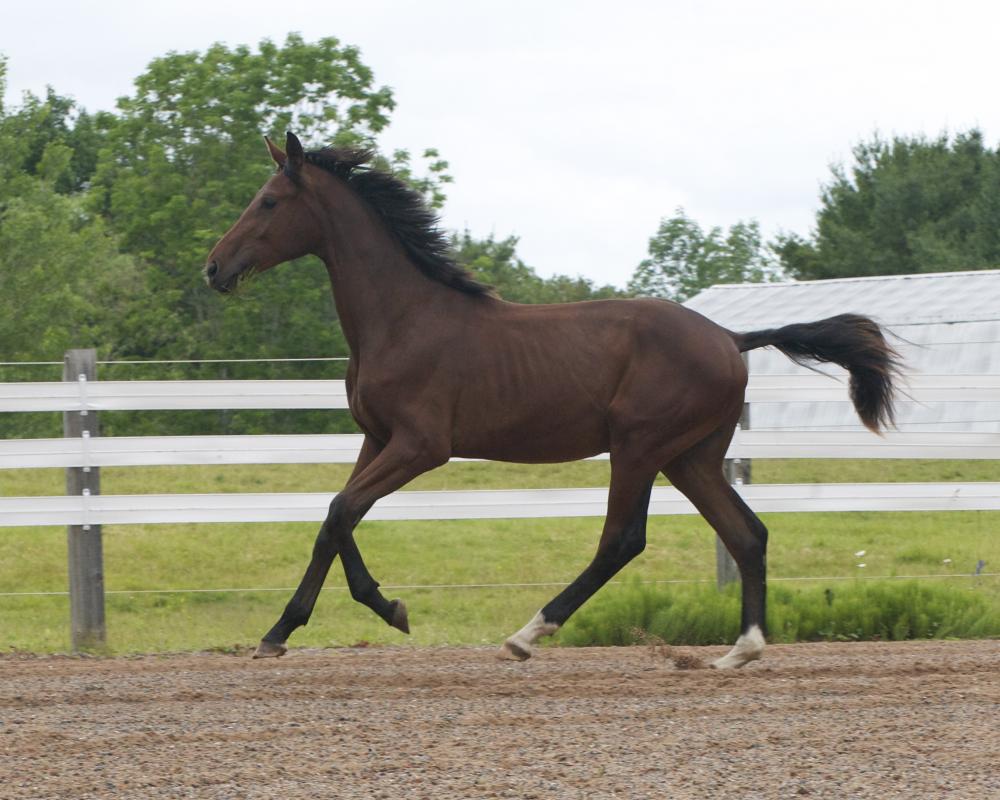 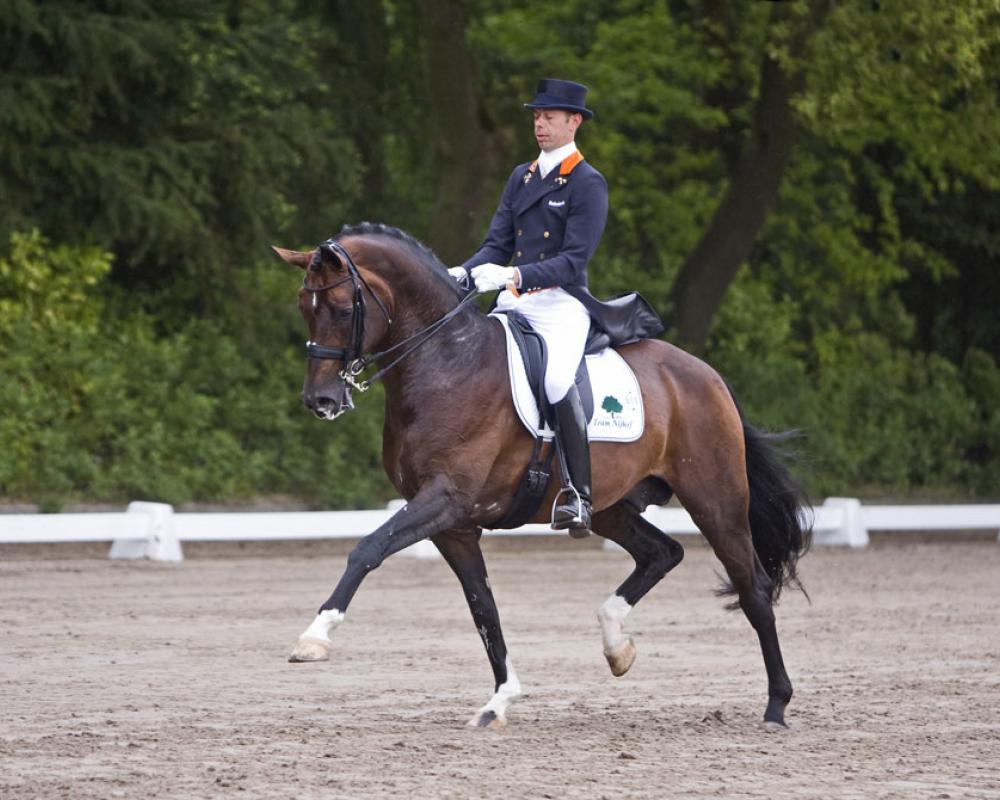 High First Premium as foal, this uber talented gelding is expected to mature 17hh+. With very correct conformation, three very good gaits, extreme suppleness and elasticity, Nuryev has what it takes to be a serious FEI prospect.

Nuryev's sire is none other than Florencio I. In 2009, Florencio's great influence in breeding was recognised by the KWPN by receiving the prestigious title "Keur". Again and again, Florencio's offspring prove themselves; several offspring scores over 70% at Grand Prix level - including the approved stallion Florenciano, ridden by Hubertus Schmidt, nearly 40 sons of Florencio are approved stallions, including the KWPN approved Carmeru, his son, Borencio won the Pavo Cup for young dressage horses twice, and many times his daughters turned out as true stars at KWPN Mare Inspections.

Sire Florestan I is an outstanding dressage ambassador of Westphalia, with many approved sons, like Fidermark, Fleurop, Furst Heinrich, Faveur, Neostan, Flores, Freestyle and Flieder. Grandsire Weltmeyer is one of the most famous sires of Hannoverwith countless approved sons and offspring at the highest level of dressage, while great grandsire Pik Bube is a world-famous sire as well.

These outstanding dressage genes were expressed though Florencio at already a young age: in 2003 Florencio became Reserve Champion of Germany at the prestigious Bundeschampionat, and as a 4-year-old, Florencio became Champion of Wesphalia. Ridden by Hans Peter Minderhoud, Florencio became World Champion for young dressage horses in Verden in both 2004 and 2005. Later on, he dominated the Dutch VHO-Trophy, twice at Prix St. Georges level. He was retired from sport to focus on his busy breeding career after 2009, and later died due to cardiac arrest in his paddock in 2017.

Florencio has sired no less than 44 licensed sons, including Charmeru, Aaron, Fackeltanz, Florenciano, Floriscount, Furst Nymphenburg I and II.

Bosanova NSN Elite, Nuryev's dam by Ferro Preferent, was Champion KWPN-NA Foal of over 100 foals of the North America. She went on to become a "Top Five" dressage mare at her studbook inspection, and later earned her Elite predicate after passing her PROK radiographs, passing her IBOP performance test, and making the KWPN-NA's "Top Five" in her DG Bar Cup class for young dressage horses under saddle.

Bosanova has produced six healthy offspring, four by Totilas, one by Soprano (lost into the hunter world), and her latest, Nuryev NSN. Only four were inspected as young horses by the KWPN. Hosanna NSN by Totilas, was Champion Yearling of North America; her full sister, Inaya NSN was First Premium, and later North American Champion of the very competitive DG Bar Cup for 3 year-old young dressage horses; full brother, Jovani NSN was KWPN-NA Reserve Champion 2 year-old; Nuryev NSN by Florencio was awarded First Premium as a foal with a score of 78 for conformation.

Bosanova passes on her high rideablity to her offspring. She is forward, sensitive to the aids, and very good in the contact with a supple back. She passes these traits on to her offspring along with her quick and powerful Ferro hindleg and ability to "sit". Her work ethic is exemplary.

Two of Bosanova's Totilas offspring are owned or co-owned by top professional riders. A third, Jovani NSN, now a gelding, competed as a stallion for the first time earning scores in the high 70's in the FEI 4 year-old test. The fourth, and eldest, Hosanna NSN, is owned by me and has been a member of the broodmare band, having also completed her IBOP and awarded KWPN-NA's "Top Five" in her DG Bar Cup for Young Dressage Horses Under Saddle.

Nuryev NSN has a very kind, soft eye. He is bold, but sensitive, and expected to be sensitive to the riding aids. He leads quietly, loves people and attention. No health issues, no vices.