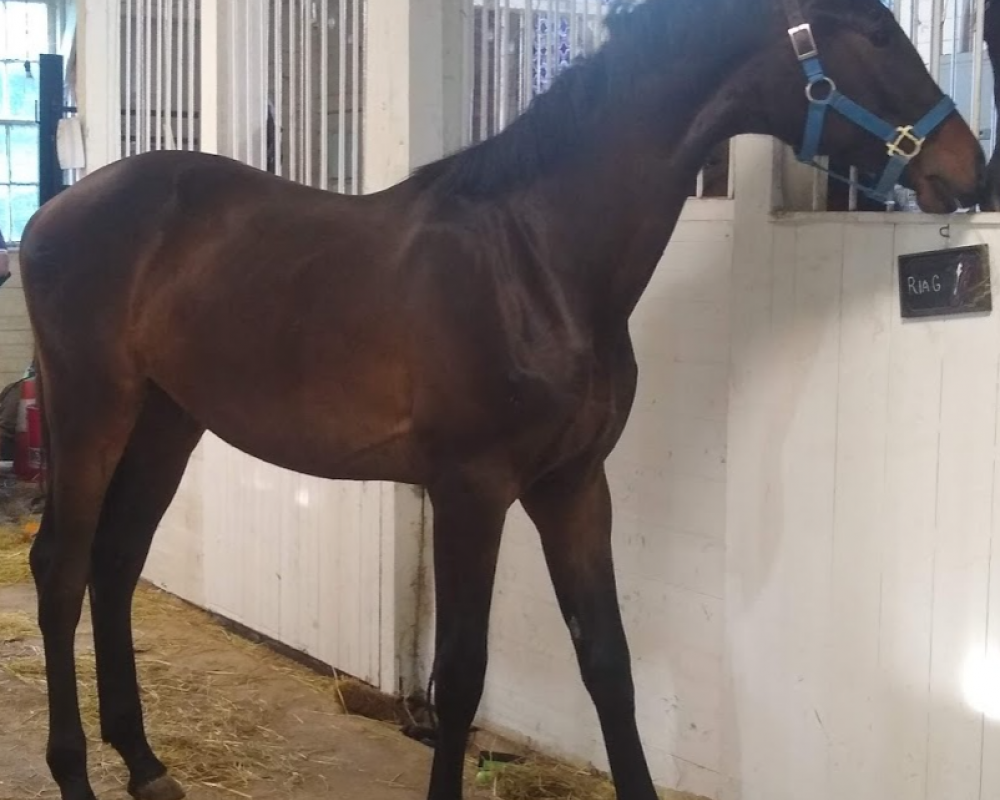 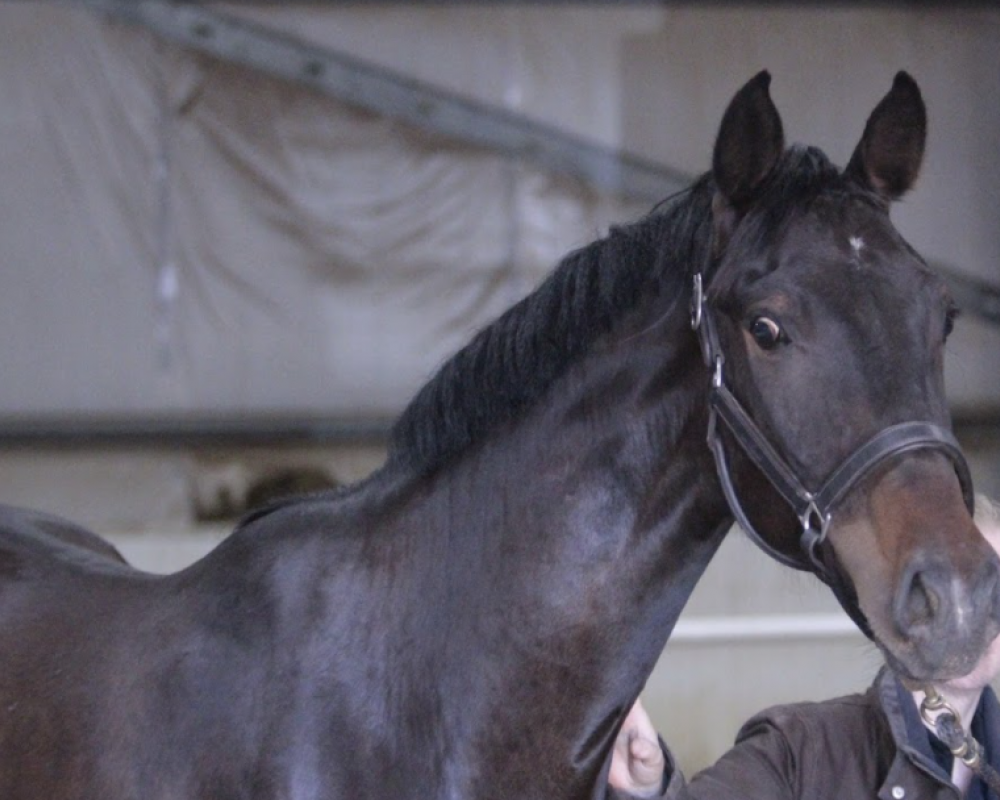 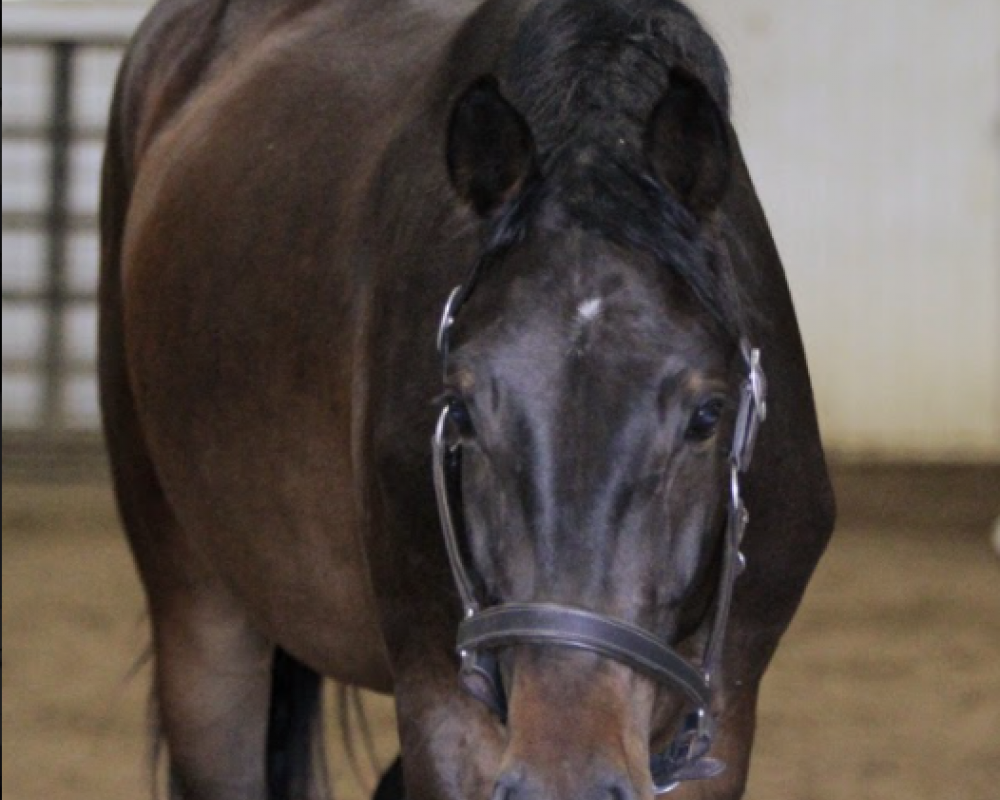 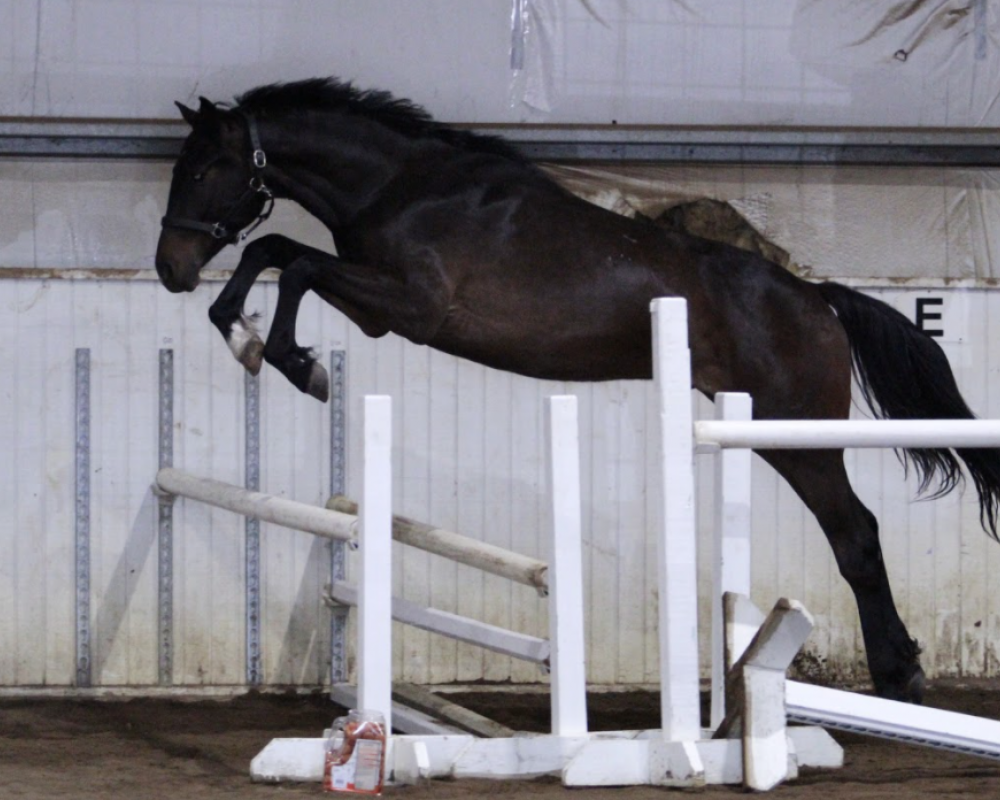 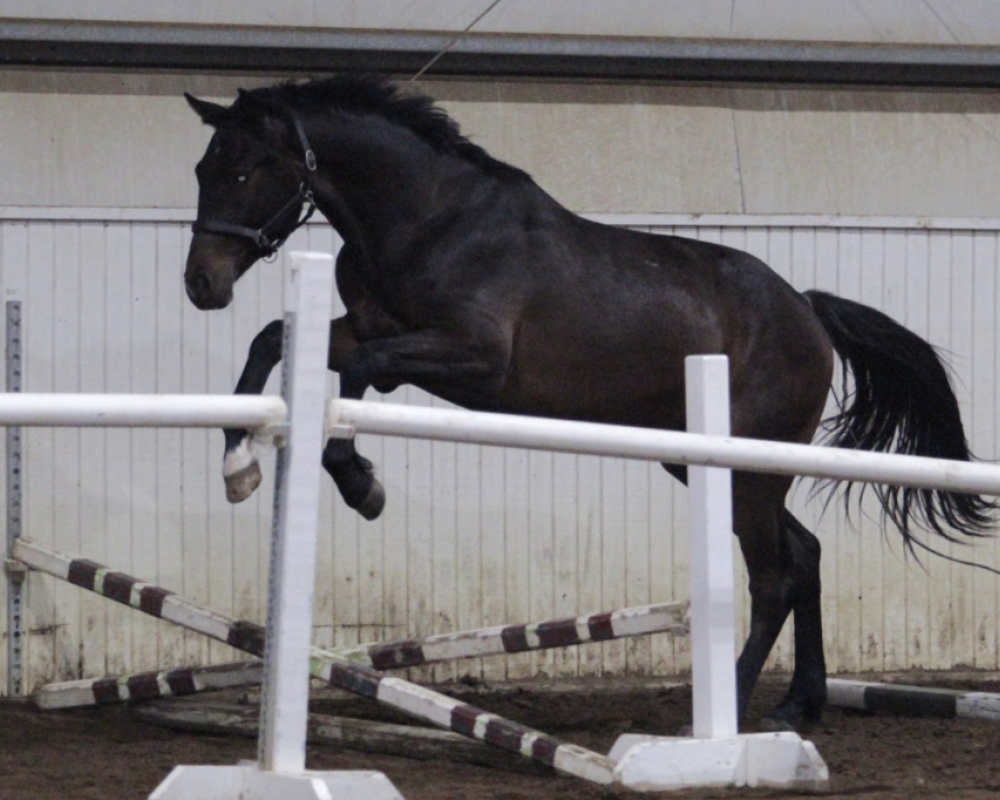 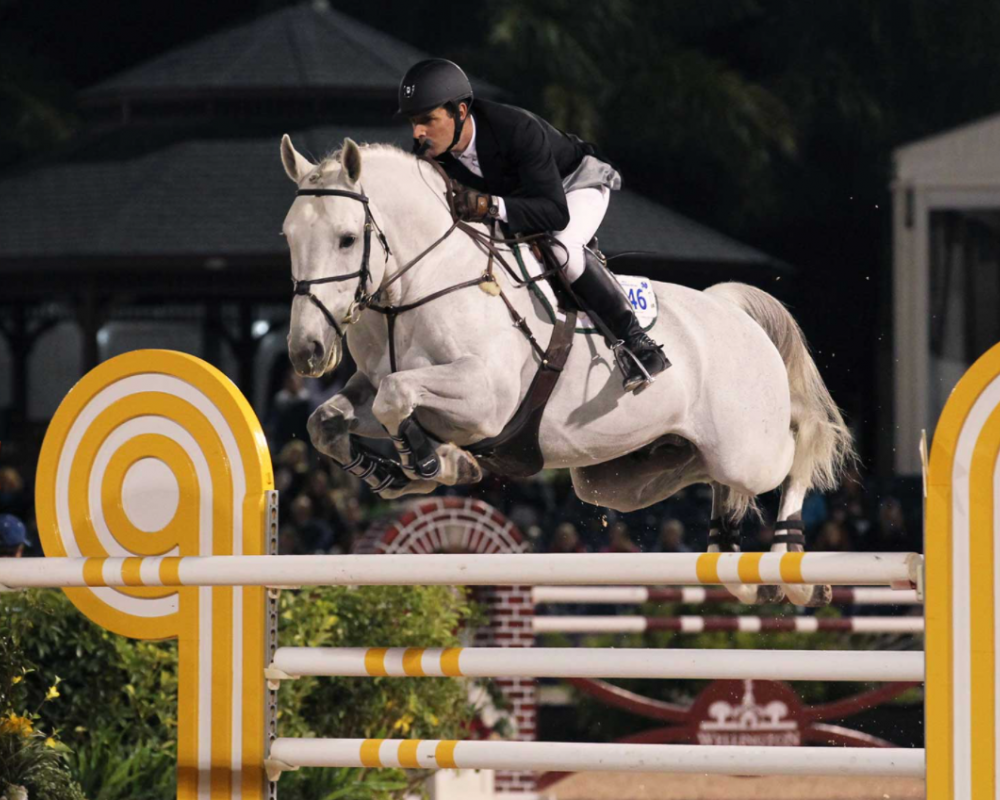 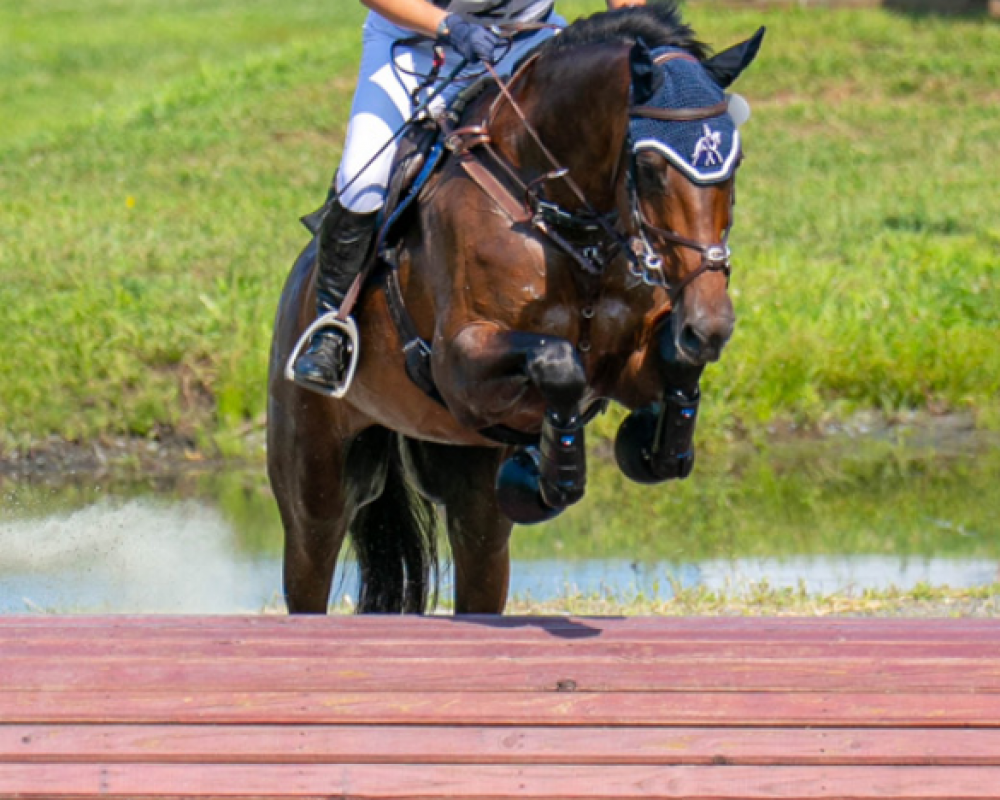 "You should take this horse to future event horse show, he will do well" I was told, and I will, unless he sells first!

Well handled. Trailered. Behaves well in new environment (trailered to jump chute training). Moves big, should jump to moon with Grand Prix jumper GK Calucci being his sire and 2* eventer Atlanta B who continues her show career as his dam (Olivander is an ET foal). Damsire Indoctro is well known for the jumping talent he passes on. More about the parents in the bottom. Olivander could go any direction really with his athletic abilities.

This gelding is very nice to have around. Stands for farrier and cross ties. Has a very kind eye. Is turned out in a mixed herd and gets along with everyone. Only good things to say about this boy.

He had abscess last summer, and needed surgery for the infection. He recovered well and is sound with fresh x-rays of the hoof from April 2021, no limitations. This unfortunate incident is fully reflected in his price.

For sale as I have ended up with too many horses coming to riding age.

__________________
The dam Atlanta B is continuing her eventing career at 2* level, and has numerous wins and placements. She is a cross country machine and also gets good scores in dressage. I saw some video footage of this mare and bought Olivander because of this awesome dam. She is by Indoctro "one of the world’s greatest sires. His offspring continue to achieve successes at the highest level and a significant number of offspring have competed at Olympic Games". Here more info about Indoctro:
https://www.vdlstud.com/en/paarden/Indoctro-Preferent-Capitol-I-x-Calet…

He competed to the Grand Prix level and his rideability made him a winner with professionals as well as amateurs. Not many Grand Prix horses, let alone one that is a stallion, are happy to show in a snaffle with their AA owner. Calucci has proven his reliability in the show ring time and again, earning top ribbons at shows such as HITS, Manchester, Devon, and WEF.

Calucci’s own success is rooted in a deep pedigree of showjumping talent. His sire Calido I, was ranked 1st in jumping at his Stallion Performance Test. Calido’s offspring have earned over 3.49 million Euros in sport and there are over 225 Calido offspring successful at S Level (advanced). Calucci’s grandsire, Acord II, was the winner of his Stallion Test with 146 points overall, including scores of 9 or higher for jumping ability and rideability. Acord II has sired S-level showjumpers and dressage horses. Calucci’s granddam had a strong competition career herself and her offspring have competed up to 1.60 meters. Great-grandsire Contender is legendary, and his influence has been felt across all the major registries and with showjumping, eventing, and dressage breeders.

Calucci retired from sport in 2014 and began his breeding career the following spring. In Calucci’s offspring we consistently see his athletic type and movement, strong topline, and good bone. With his pedigree, it is a given that scope and jumping ability transmits readily. Calucci can add some size and will provide good bone for a more refined mare.