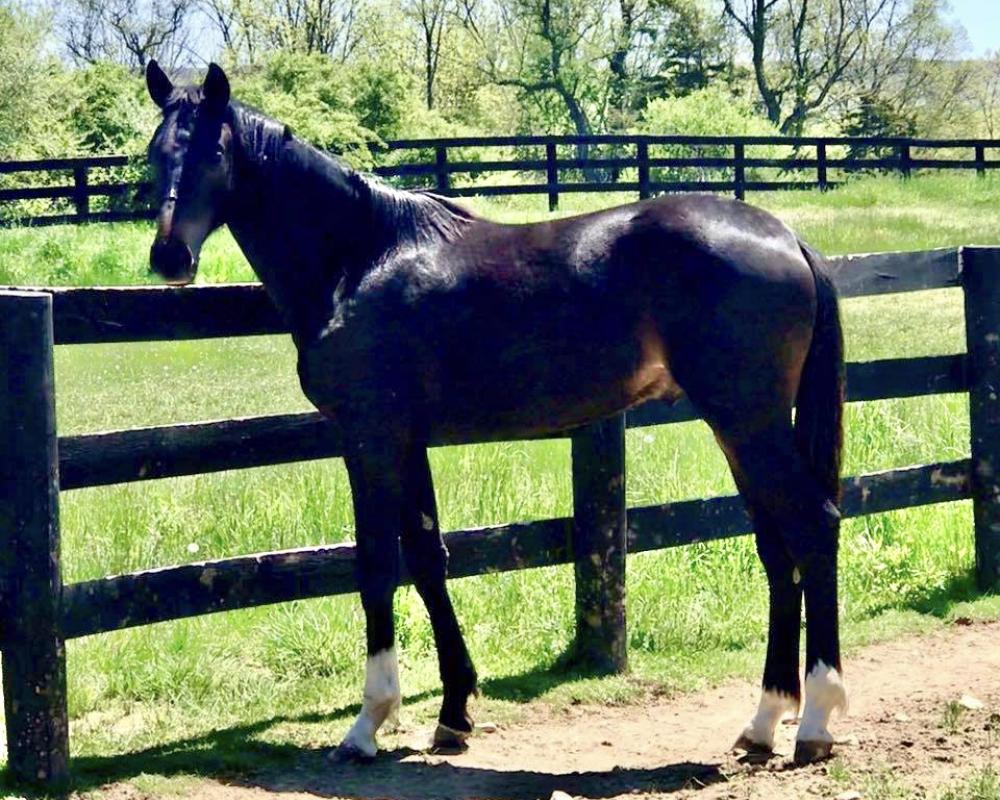 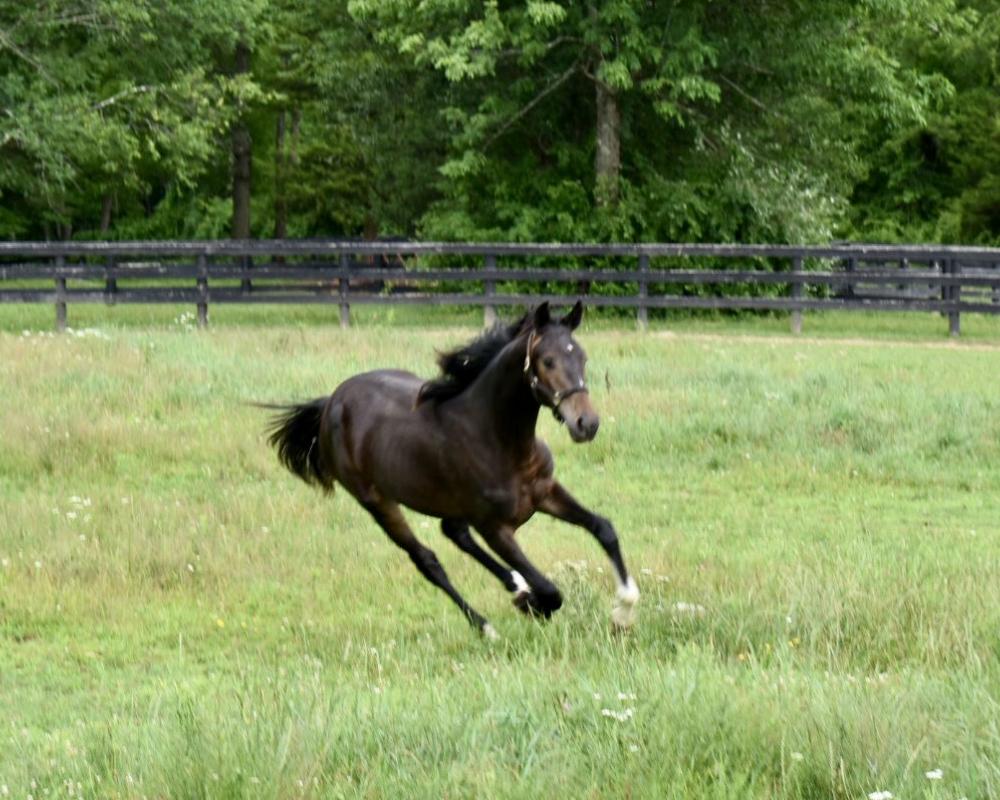 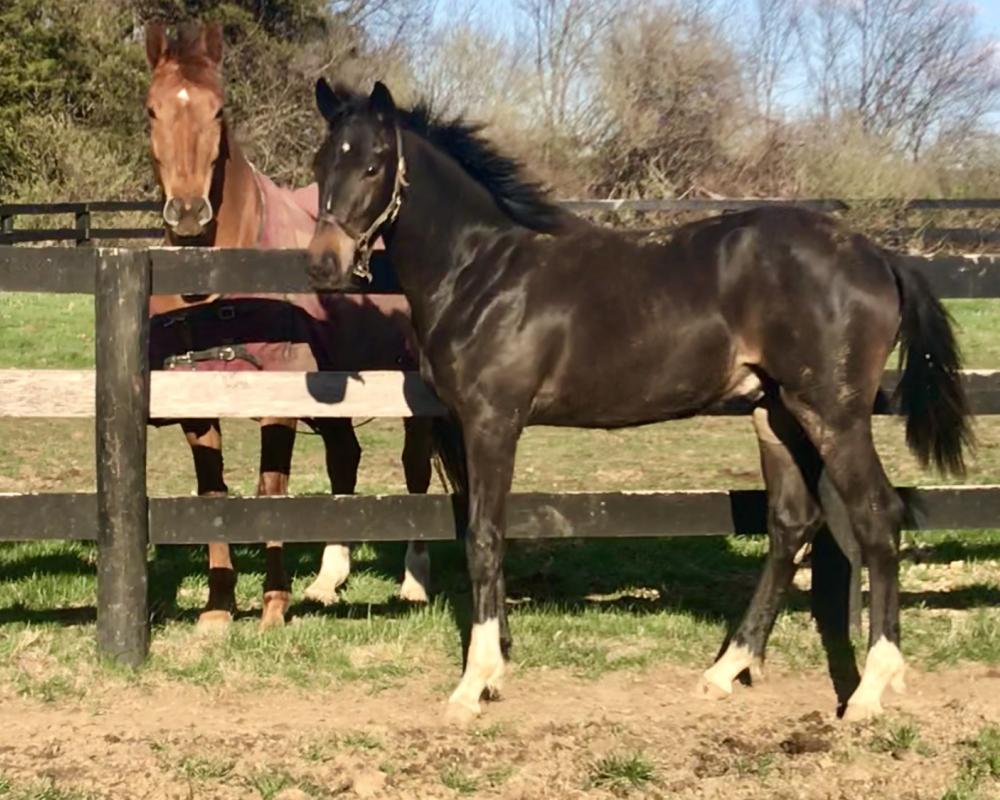 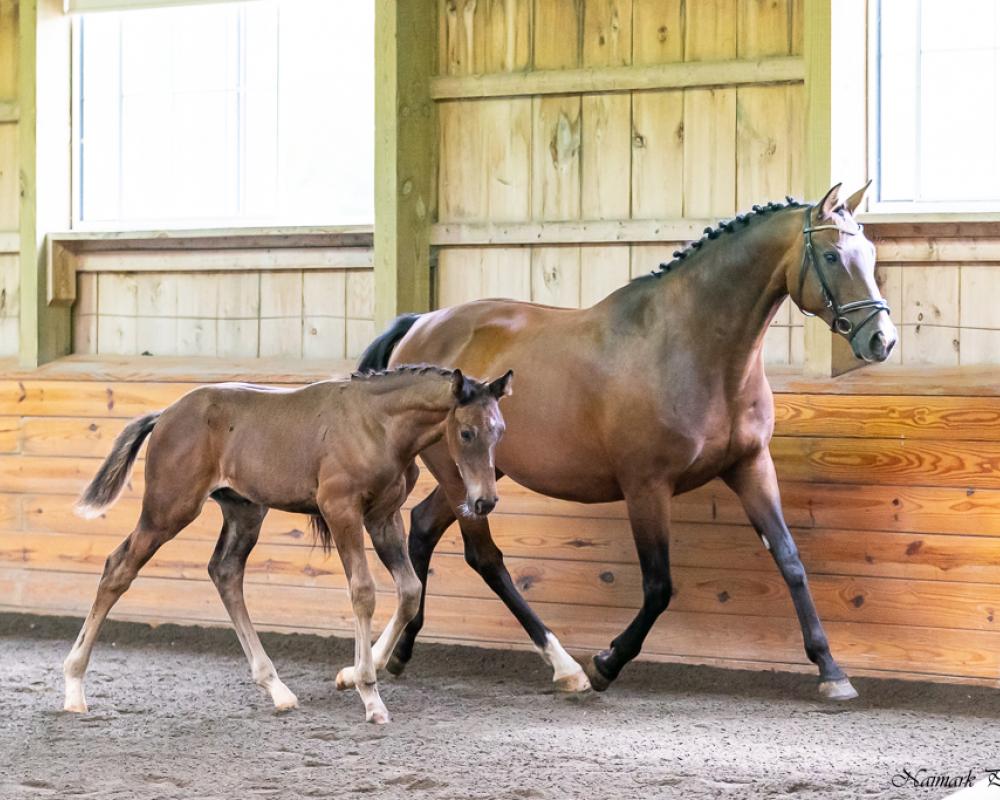 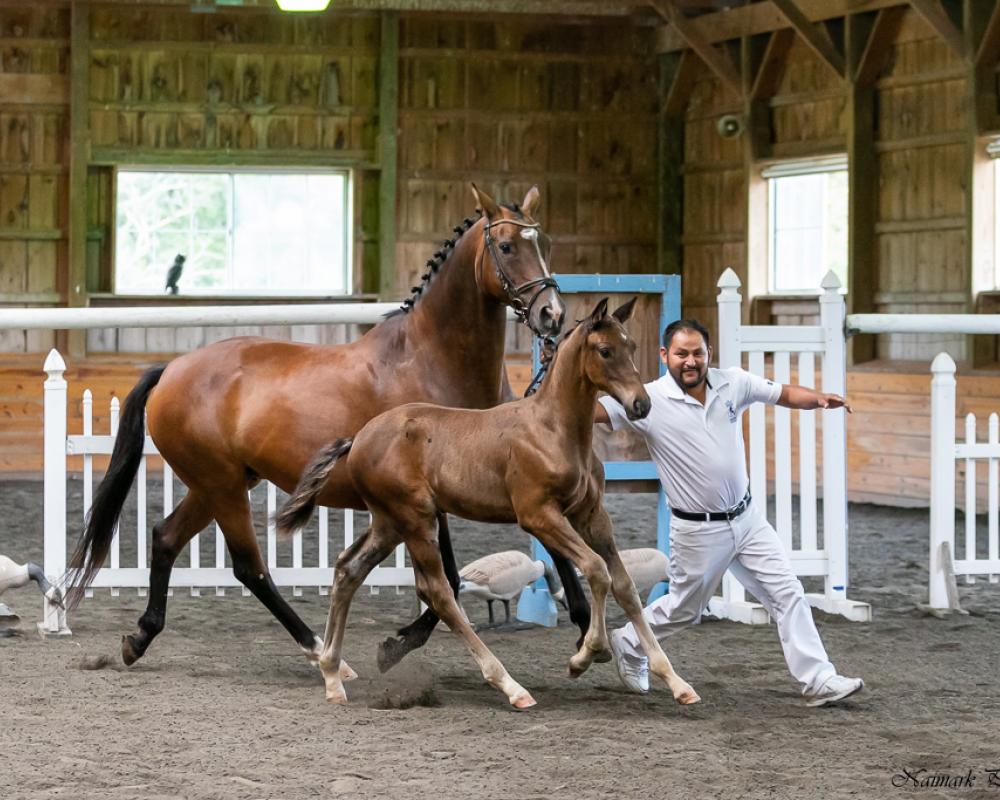 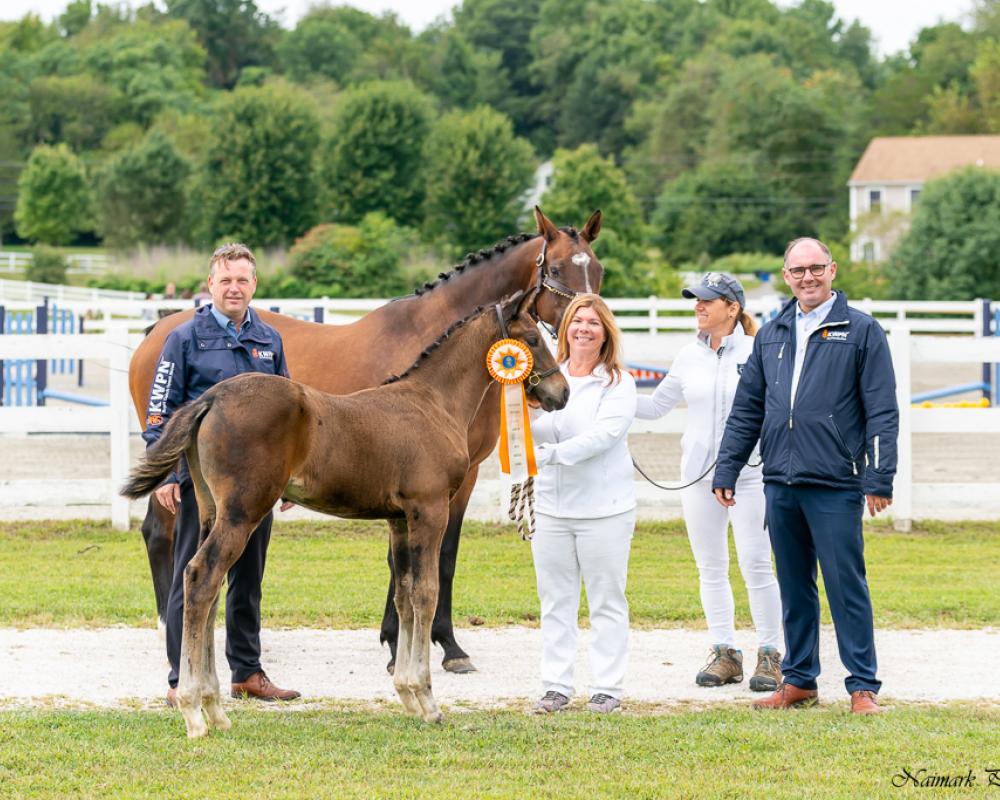 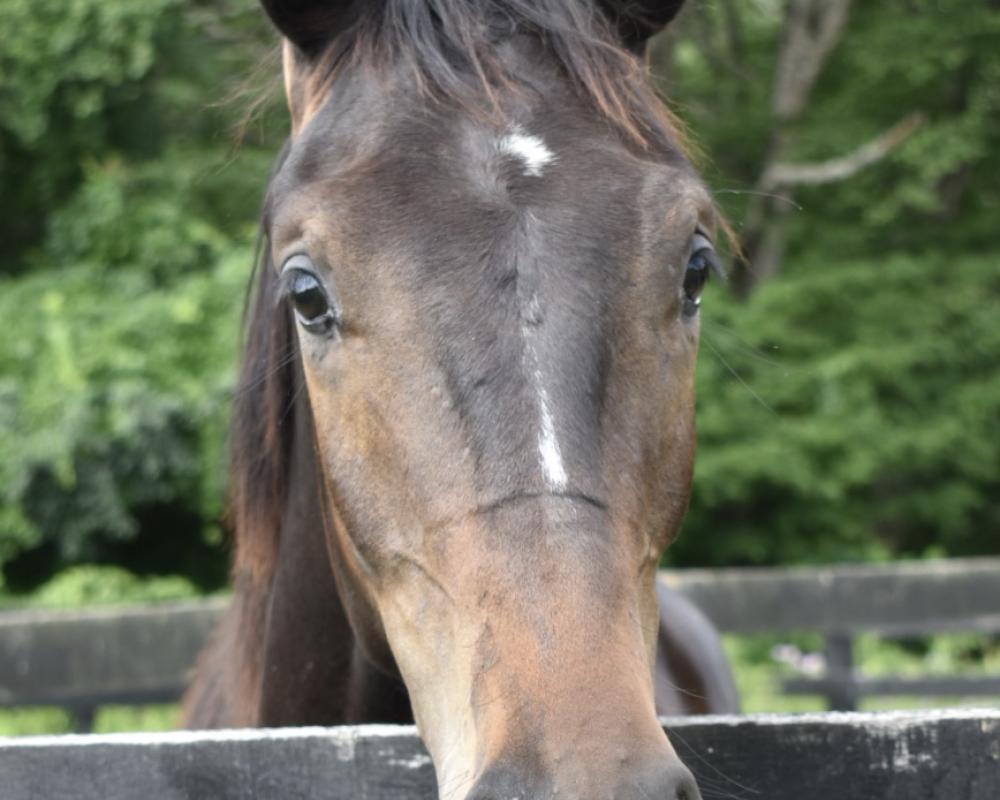 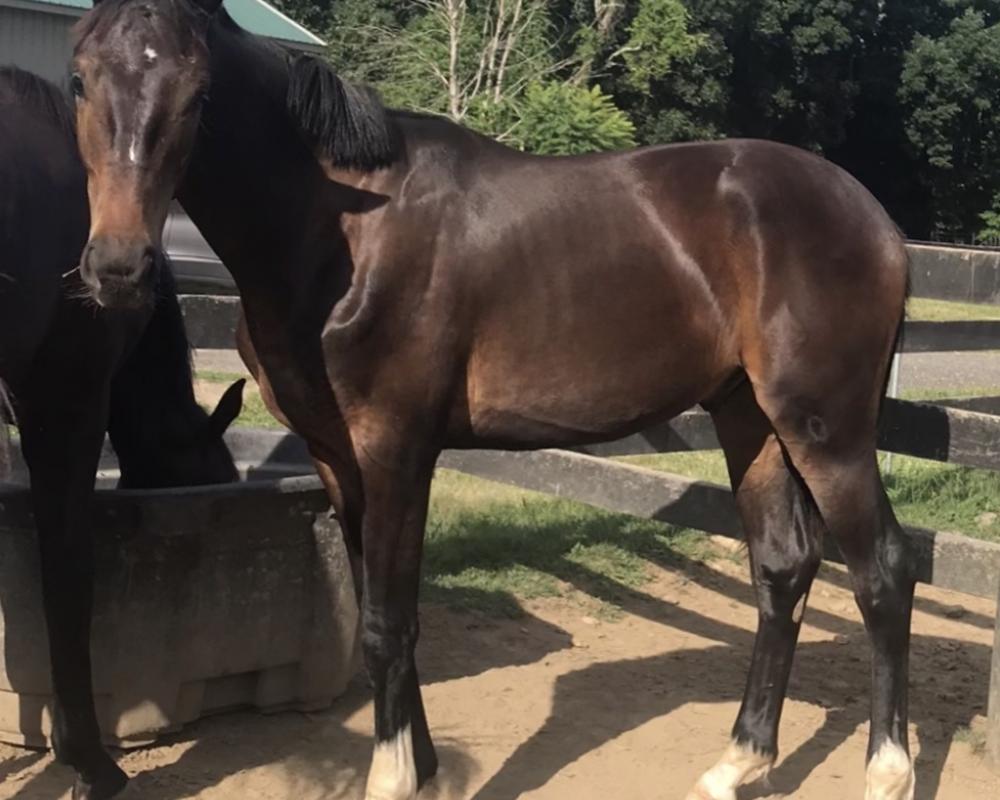 ARE YOU LOOKING FOR A GORGEOUS YOUNG PROSPECT? Look no further! Ollie was the Inspection Site Champion/High Score Dressage Horse at his KWPN/NA Keuring.

He is truly a pretty horse - very well put together! Stunning, long-lined,, friendly and athletic yearling combines the best of Dutch and Hanoverian breeding - of both dressage and jumpers! Ollie has a gorgeous head and a shiny coat that looks Like a rich dark Chocolate/black bay. His sire is a Grand Prix Dressage stallion. Schroeder is a gorgeous Hanoverian stallion by Sandro Hit out of a States Premium mare by Escudo I. Dam is Avelina, Ster by Olivi, Keur out of a Ster mare by Olympic Lancet. All the male horses in his pedigree have performed at Grand Prix or better and all the mares in Avelina’s mareline are Ster quality or better! This Young horse is exceptional in every way!

Super comments from the KWPN inspectors (they really liked his type!), Ollie was awarded 1st Premium and received impressive scores including 80 for conformation & 72 for movement - not bad for his 1st time off the farm and after a 2 hour trailer ride that morning! He was the High Score Dressage Horse of all dressage horses that day at his KWPN/NA keuring and he handled the new environment with confidence.

Ollie is nicely balanced, intelligent, athletic, curious, friendly, playful and a bit introverted. He has an impressive presence. He is destined to shine in the competition arena. He has an uphill, athletic build and long, correct legs. His pedigree combines the best of Dutch and Hanoverian top competition pedigrees. He is a good boy, has beautiful legs. a gorgeous front and strong hind end plus he is naturally balanced. He is going to be a super performer with easy tempi’s, a bit of jump and an intelligent, willing personality. Avelina's foals typically mature slowly - they become more impressive with incredible movement as they mature. Ollie is already impressive so the future looks incredible for him in dressage or hunters. There’s no doubt he is going to be exceptional as he continues to mature and we are excited for his future!

Sire Schroeder is a gorgeous 17+ hand Hanoverian stallion currently competing at Grand Prix. Schroeder was the FEI Intermediare II Reserve Champion National Horse of the Year in 2018. He is by Sandro Hit out of States Premium & Champion mare Esmeralda by Escudo I. Schroeder has a super character (9!), powerful movement, modern, leggy, uphill and excellent trainability. He consistently passes these qualities to his offspring and Ollie is no exception! Schroeder’s sire Sandro Hit needs little introduction and has been ranked among the top 10 best dressage sires in the world. Schroeder's dam is the states premium mare SPS Esmeralda by Escudo I (Hanoverian Stallion of the Year in 2009 and also known worldwide for producing outstanding jumpers).

Dam Avelina is a Ster mare who was named the Reserve Champion Dressage mare in all of North America after the 2010 KWPN/NA Keuring Tour. This mare can move - consistently scoring in the 80’s for her movement! She comes from a strong line of Predicated mares and performance sires. Her sire Olivi was also Reserve Champion of his Championship Keuring, and he is a highly ranked Dressage Sire. Olivi competed up to Grand Prix, has a Dressage Index of 175 based on the success of his offspring and was named a Keur stallion based on the consistent quality of his offspring. Grandsire Lancet competed at TWO Olympic games (Athens and Bejing). Offspring of Lancet were very good dressage horses who also turned out to be very good jumpers - likely because his granddam Anika was a full sister to Argentan I and II). Avelina has produced quality young horses and is proving to be a versatile producer herself. Even though her oldest is only 8 years old, she has offspring currently competing up to 1.20 meter jumpers on the west coast and at young horse dressage classes.

Ollie's pedigree is filed with the best of the best including top Grand Prix performers and numerous predicated mares on both sides of his pedigree. He is inquisitive, athletic, intelligent and personable. Expected to mature around 16.3 hands, he is already quite tall for a young horse. He will be an incredible dressage partner for someone looking to start their next dressage horse from the ground up and considering both sides of the pedigree are well represented by jumpers and dressage performers, he could easily go in any direction.

Ollie is a hearty young horse that will be a fantastic competitor! Affordable raising board available.