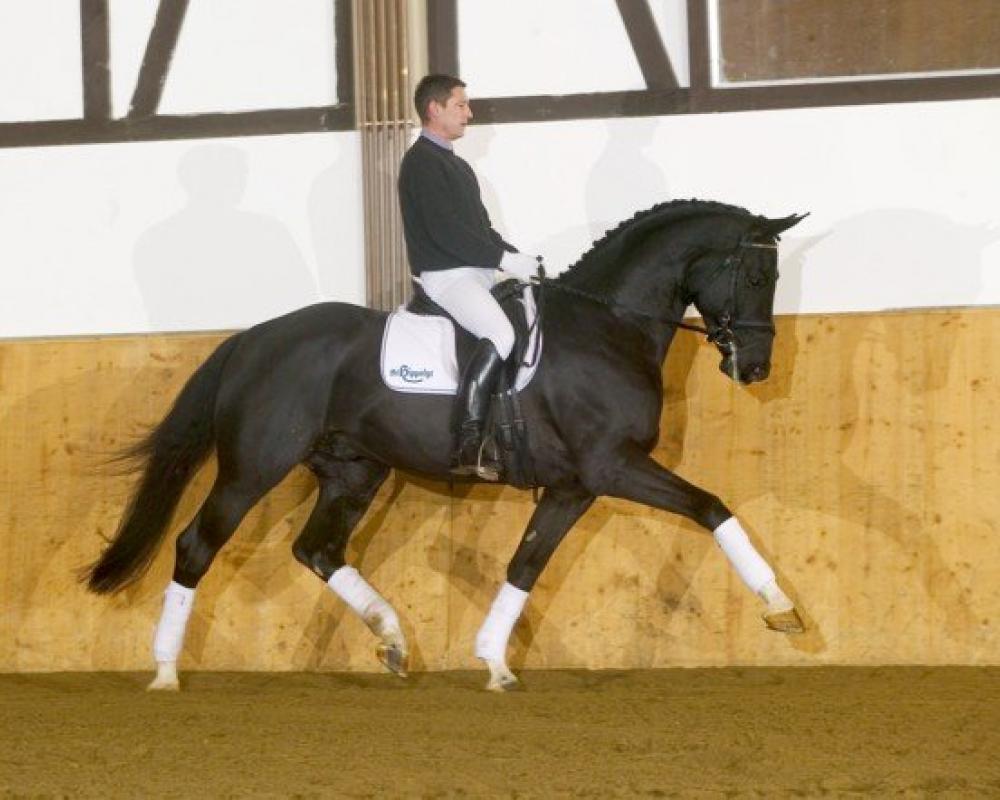 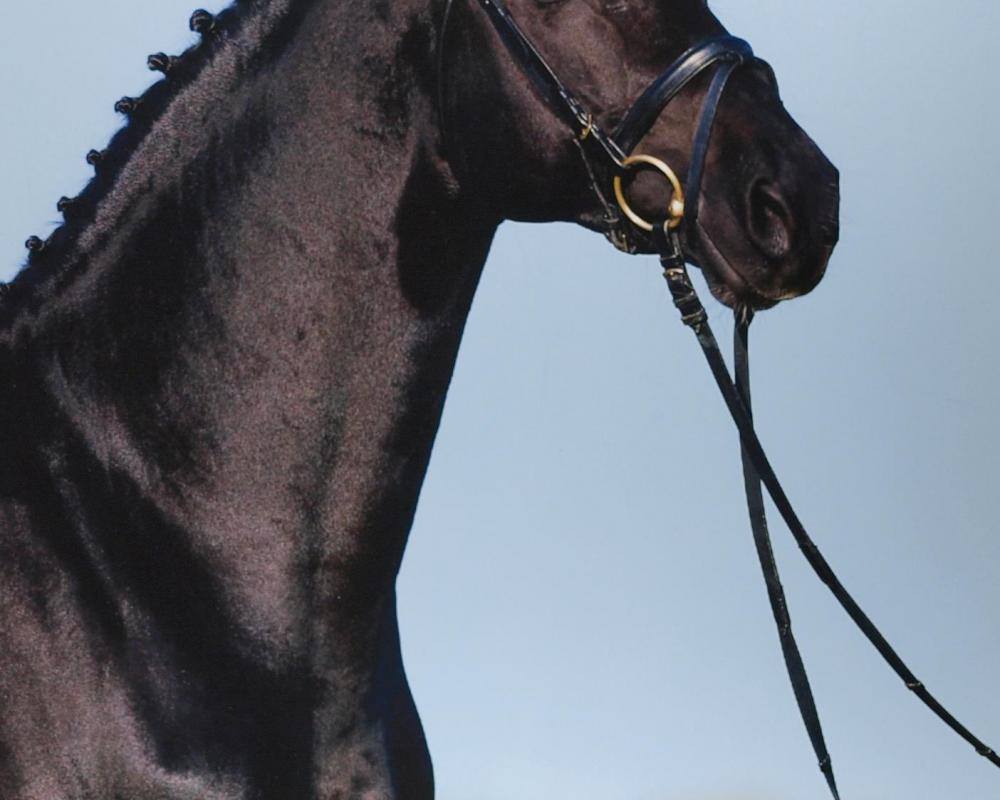 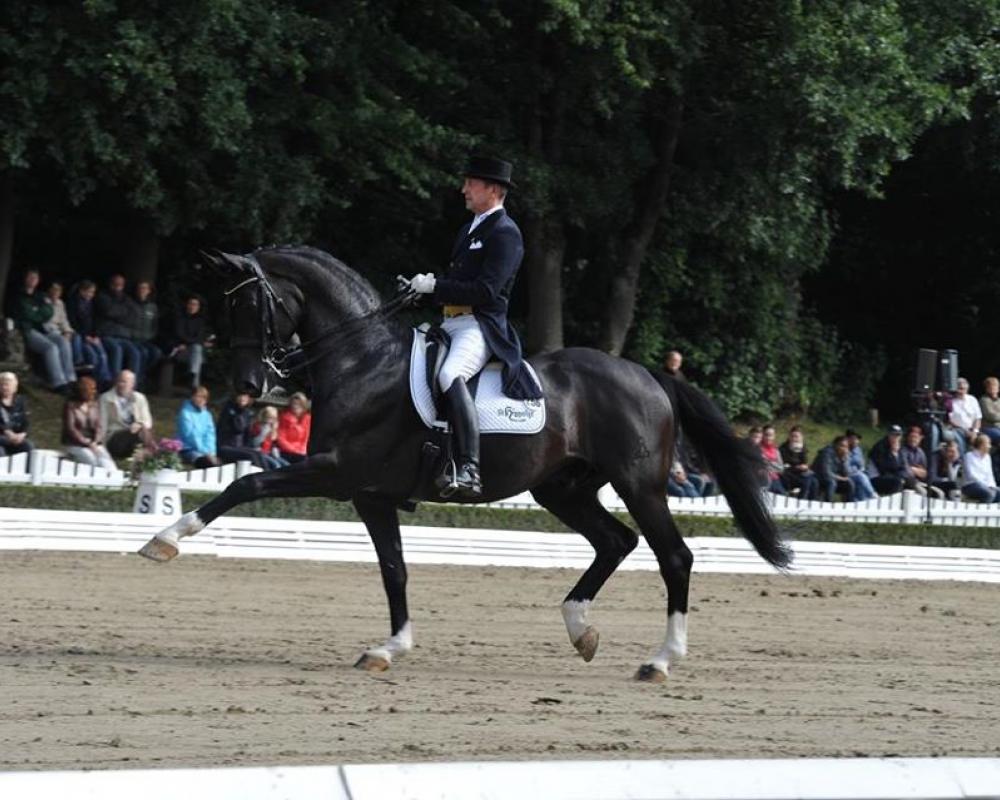 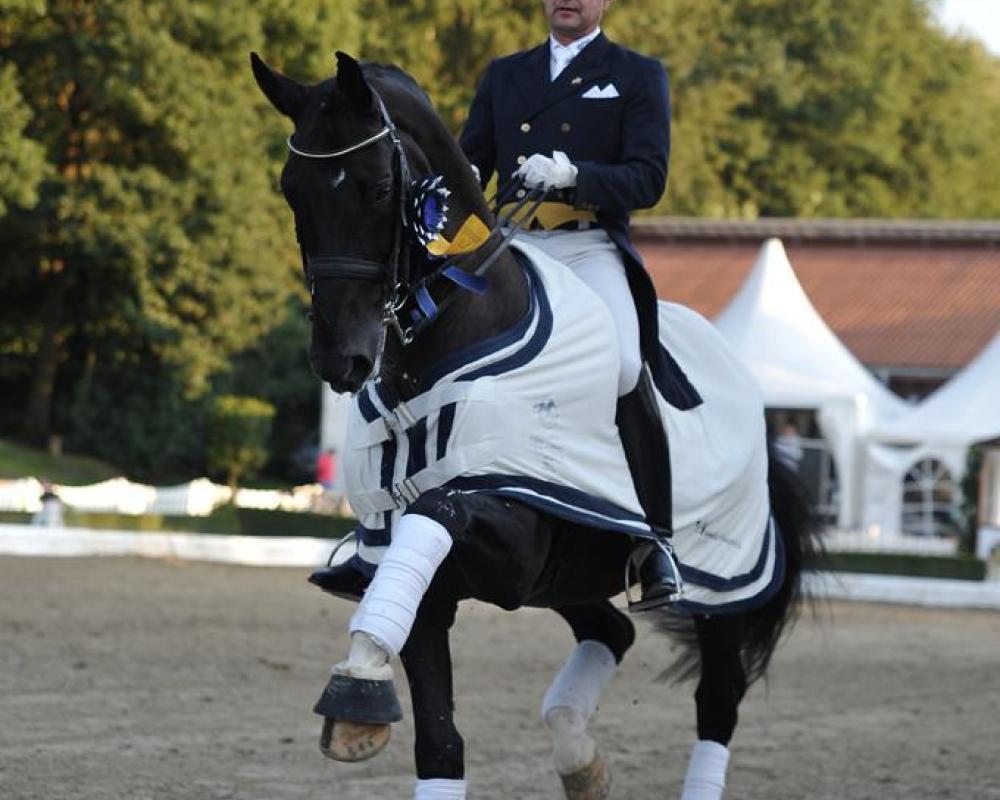 Patriot is an Award winning Grand Prix dressage stallion. He is the son of the great Safir who successfully competed to second alternate for the 2000 Olympic team. His sire, Pharaoh also competed successfully to the Grand Prix level. His beautiful movement and temperament make him an outstanding choice for your next breeding season.

Patriot spent ten years in Germany successfully competing through Grand Prix with Oliver Luze of Gestüt Tannenhof. Patriot had 19 victories and numerous high placements in S level thru the Grand Prix. After Patriot returned to the states he competed thru Intermediate II with Adam Steffens. Patriot has a wonderful character, is extremely intelligent and is an affectionate horse with an enormous heart. His success has been no accident - he inherited his mother, Safir's talent for piaffe/passage and his fathers trainability. This noble representative of the Westfalen Paradox I stallion line (Westfalen P Line) represents a valuable out cross variant.

Patriot is licensed in Germany with the Oldenburger Pferdezuchtverband, the PZV Baden-Württemberg e.V, the PZV Rheinland-Pfalz-Saar e.V, the LV Bayerischer Pferdezüchter e.V. and received his HLP (German stallion performance test) via sport. Patriot also has a lifetime approval with ISR/Old.

Patriot's sire, Pharaoh went on to have exceptional success up through Grand Prix dressage under top US trainers like Jan Ebling, Dennis Callin, and Michael Barisone. His sire's mare line was the German National Champion Family in 1992 and has produced horses such as Sir Heinrich, Escamillo, Cindy OLD, Candy OLD and Routinier. Pharaoh's sire, Parabol was the Champion of his 100-day Performance Test with the outstanding overall score of 140.38 points. A successful jumper in Germany, Parabol easily transitioned to the dressage arena after his purchase by Jane MacElree. He was the 1991 USDF Horse of the Year at Third Level and a Top Ten Finalist for the 1995 Pan-Am Selection Trials before developing into a successful Grand Prix horse with both Scott & Susanne Hassler. Approved by multiple breeding associations, Parabol’s influence has been significant and he has an approved stallion, multiple Premium/Elite mares, and high-level competitors in dressage, hunters, and show jumping to his credit.

Patriot's dam, Safir was the Second Alternate for the 2000 Olympics in Sydney. Safir's sire, Diamond received reserve champion at the Danish Warmblood Herning with a score of 799.6 points. Diamond has over 800 registered offspring which include licensed stallions and international competition horses.

Patriot's grandsire, May Sherif was the first Danish stallion with an international reputation. Despite competition from imported German and Swedish horses, May Sherif won his performance test for the Danish Warmblood Society in 1975. May Sherif started out covering around 150 mares a year, a very high number at the time and went on to compete at Prix St Georges level. In 1988, he had two of his progeny competing at the Seoul Olympic Games, Andiamo, then ridden by the Swiss Otto Hofer, and Matador with Kyra Kyrklund. Suddenly May Sherif was not only popular in Denmark, but his semen was being sent all around the world.

Ivory Hills Stable is a boarding, training and breeding facility specializing in dressage and showing, although we welcome all breeds and disciplines. We are close to the Twin Cities, just across the border from Minnesota in Wilson, Wisconsin directly off of I-94 on State Highway 128. We are located 30 minutes from the St. Croix River border. As horse owners ourselves, we know that you want to be certain your horse is well cared for while you’re away. At Ivory Hills, we strive to offer personalized service to fulfill the needs of owners and horses alike. We offer indoor and outdoor riding areas designed for teaching riders of all levels and we can provide all of the equipment necessary to begin your equine learning experience. For those with their own equipment and horses, we offer different boarding options and all of the amenities to go with them! If you're just looking for a place ride your horse and keep in shape throughout the year, contact us to schedule a time to use our large indoor arena!
Email Seller Now
Visit Seller Website
More Horses From Seller