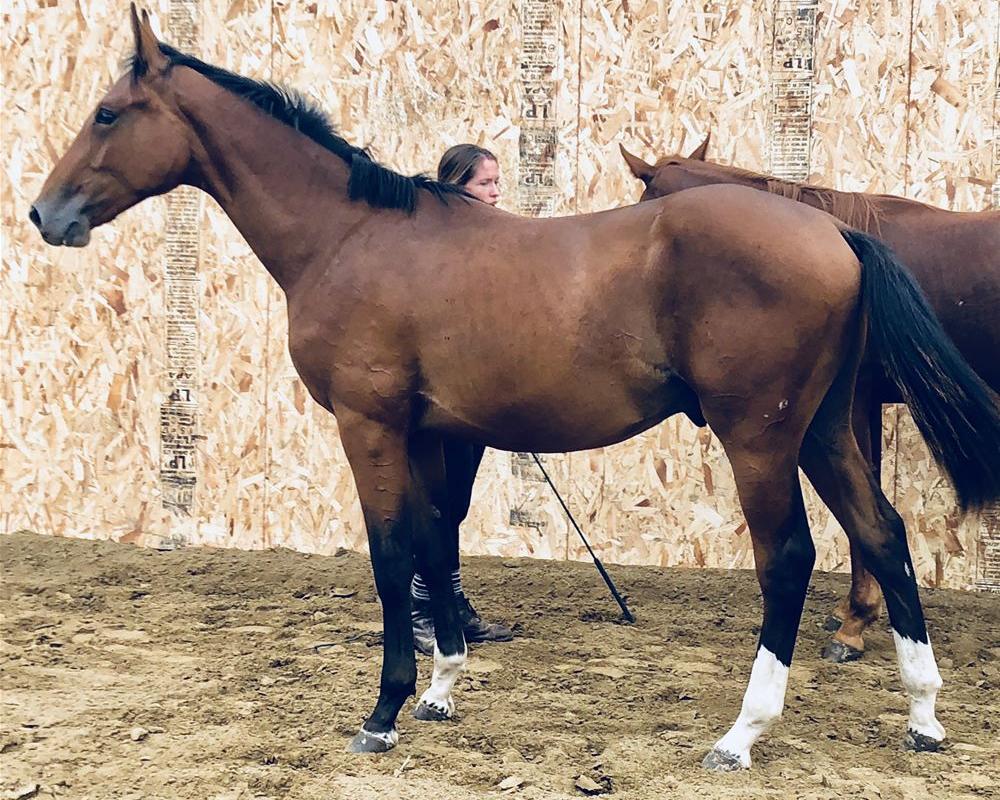 My Pleasure Bloom is loaded with good jumper bloodline. His future would ideally to be developed in the hand of someone aiming for upper level .

His sire For pleasure is an international jumper. He competed with success at the highest level in sport until he was 19 years old, only to retire sound. Among his numerous win he won Gold medals in Two Olympic Games, two Gold and one Bronze at 3 European Championship and one Gold and Silver at 2 German Championship. He has 89 approved stallions and a high rate of international Jumpers. Only in 2018 his progeny earned more than 2 millions USD in FEI recognized event. For Pleasure is a legend as a jumper and as a sire .

This colt’s dam Flower is by Nabab de reve, a career broodmare from the best mareline in Holland. Her first foal by Capone I is just turning 5 and was a first premium as a foal and in the top ten jumper at his studbook inspection with a Star predicate . Flower is a daughter of Harmonie by the 1M60 GP jumper Calvados Keur. Harmonie , who jumped with success in the 1m 50 had all the predicates a mare could have from the EPTM, Elite, Sport to the most prestigious Preferent and Prestatie. But what set her apart from the best was she had the highest jumper breeding value that kept her Number One mare in Holland for 13 years in a row.

In addition to being a successful GP jumper Harmonie succeed in producing offspring with high score at their mare test, full of predicates and performed to 1m 55 GP jumpers. She also produced two approved stallion. Her dam Electra by the renowned 1m60 GP stallion Voltaire Preferent, jumped at National level in the 1m35 and her dam Hurricane was a 1m60 Grand Prix jumper.
Overall the 7 horses comprised in the last three generations of this mare, there are three 1m60 jumpers, one 1m50 , one 1m45 and one 1m35 for a total of 6 out of 7 in sport. This is what we call a performance line. Flower might not have been given the chance to prove herself in sport as I wanted as a broodmare but she would certainly have performed well with this family behind her.

The sire of Flower, Nabab de reve a Grand Prix jumpers himself has produced 81 jumpers in the 1m60 International circuit such as London, Olympic medalist, Vigo D’Arsouilles, Belgian Horse of the Year 2018 and the best horse of the World at the 2010 WEG in Lexington and many more. Nabab de Rêve was represented by three of his progeny at the London Olympic Games while his son, Kashmir van Schutterhoff, also provided one competitor. And his son Zinius ranked number one jumper in the 2018 WBFSH. These are without considering the 250 jumpers of FEI level from 1m40 up to 1m55 and still adding up.

Cooked in North American with imported European ingrédients.Genetically hard to find better qualité for a jumper prospect here in NA.

Bloomington Farm is a small breeding operation with high expectation. Our goal is to produce world class jumpers for the American market. We take great pride in the selection of the stallions which represents the best bloodline available but we are particularly proud of our broodmares which include the best Holland has produced. Our mares included out of the highest KWPN jumper breeding value ever imported to North America Prelude Keur Sport EPTM. Her full sister the International jumper Harmonie lead until her death this prestigious breeding index for at least 13 consecutive years. We have one of her daughter by Nabab de rêve. Another top mare, Tabelle S have produced GP level horses such as Andretti S who was a star competing with Olympic rider Laura Kraut. Our broodmares are all registered with the KWPN and include top sires by Mr. Blue, Nabab de rêve, Animo , Indoctro and coming up as our next prospects Casall and Diamant de Semilly. Our business philosophy is stamped from our own value. We believe in integrity, trust and honesty and we treat our clients as we want ourselves to be treated. We are conveniently situated between Ottawa and Montreal and 30 minutes from New York State. We would be please to meet you at our farm and share our love for this special breed.
Email Seller Now
Visit Seller Website
More Horses From Seller