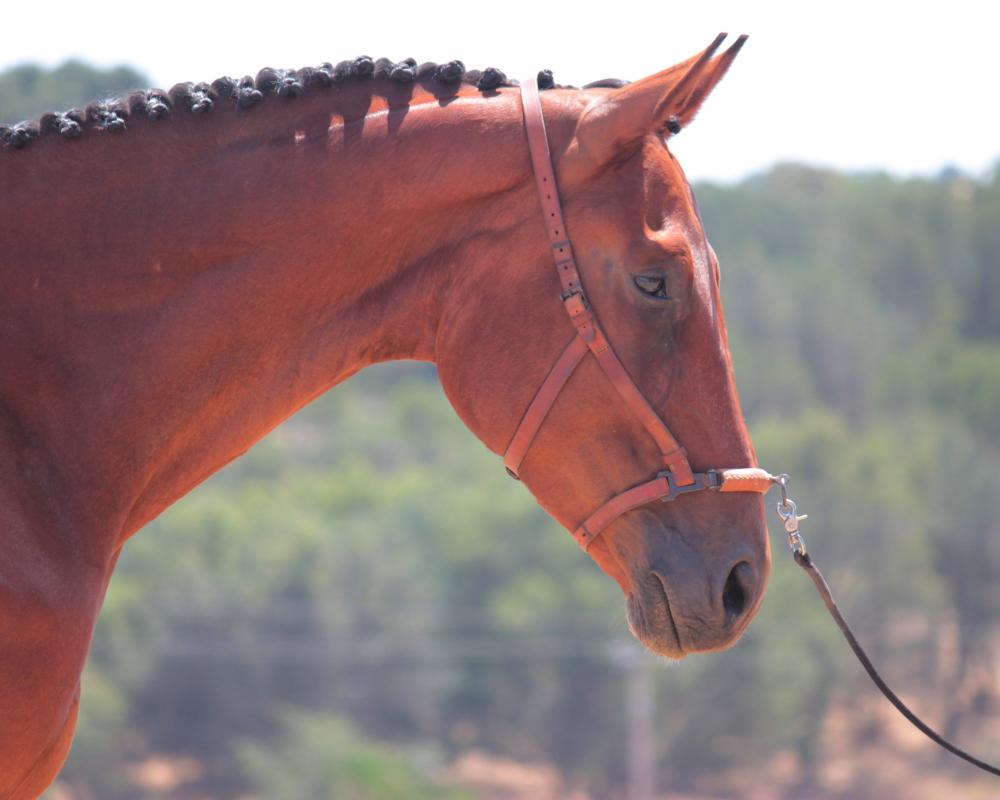 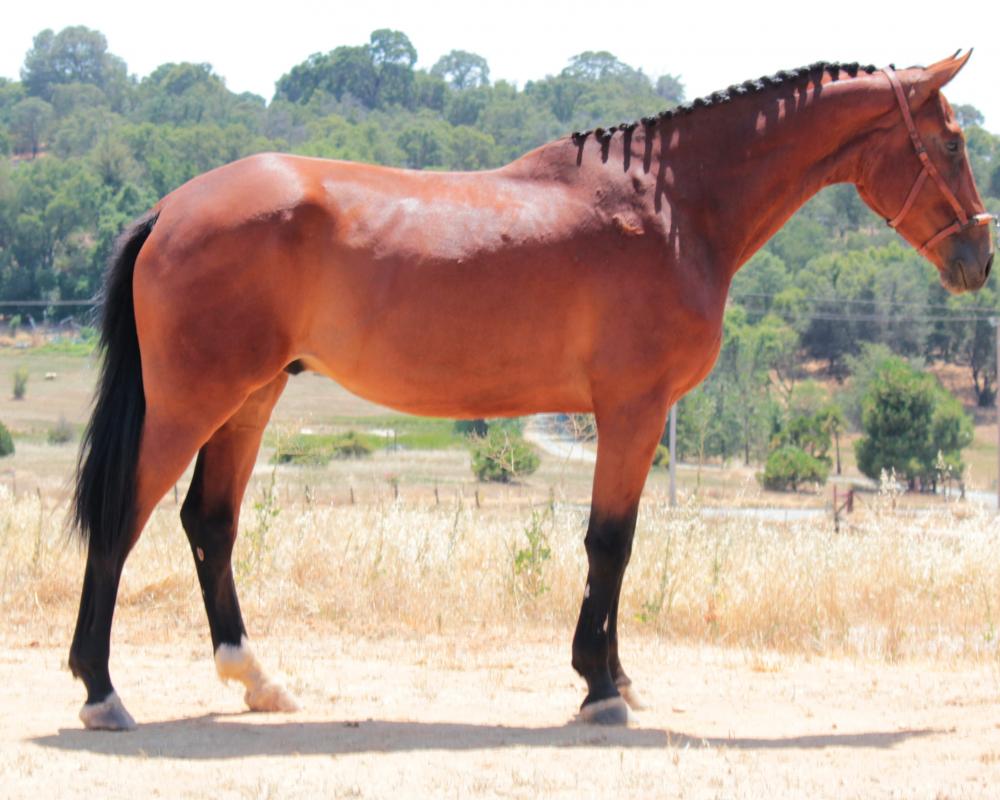 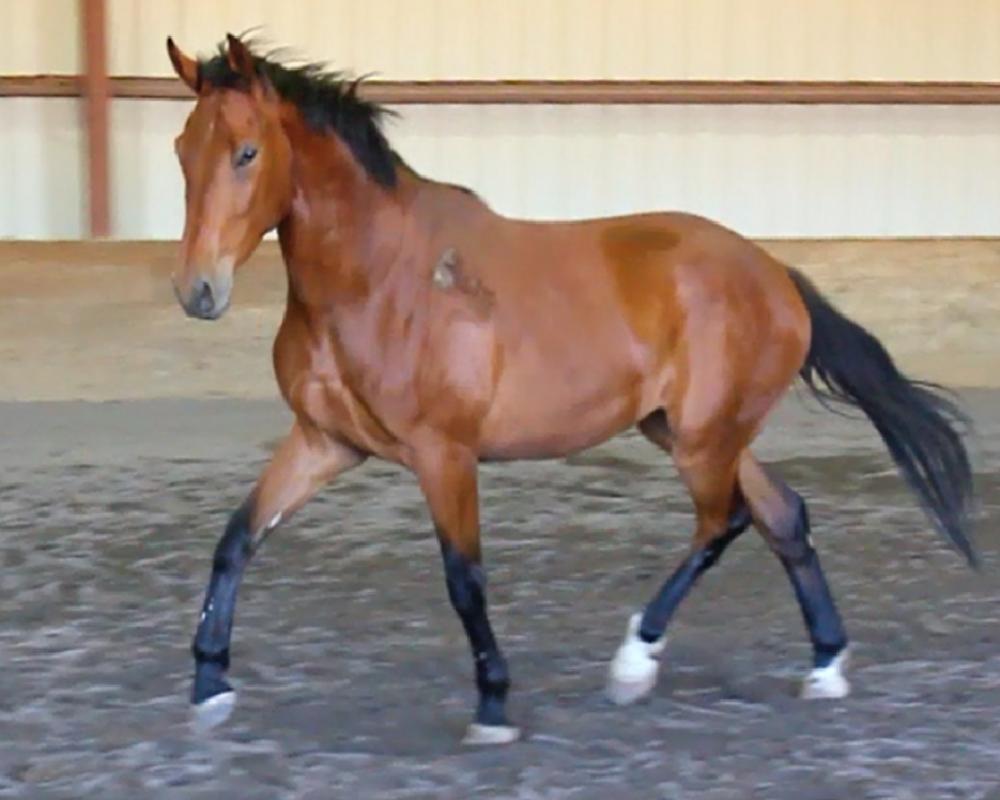 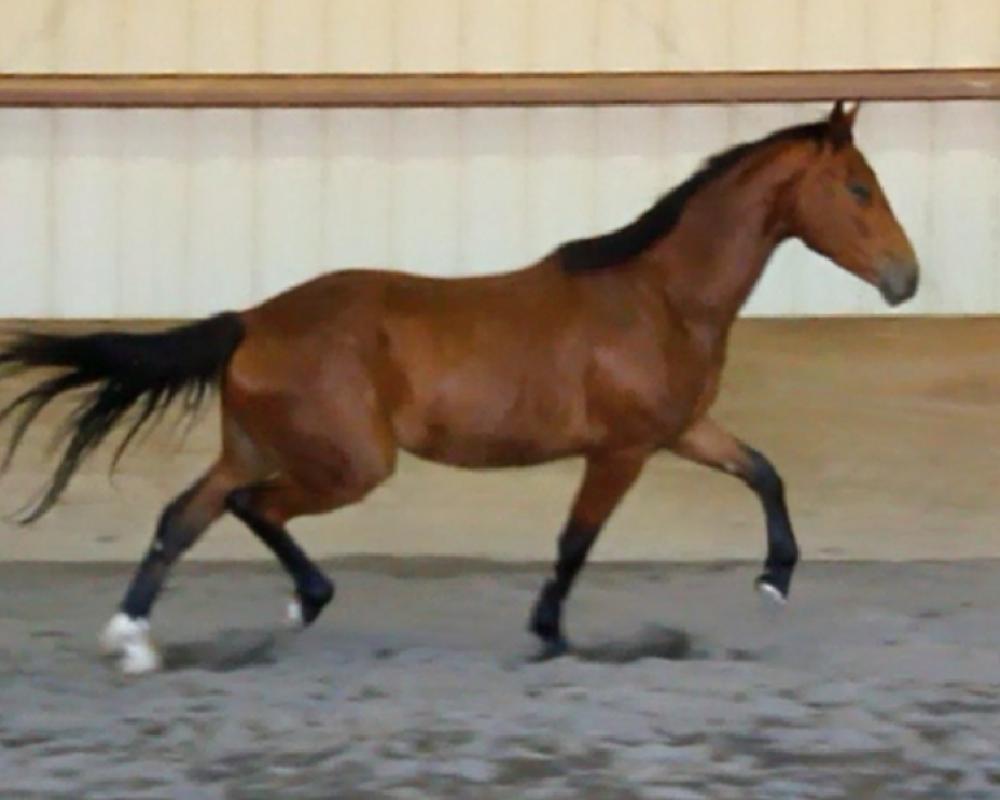 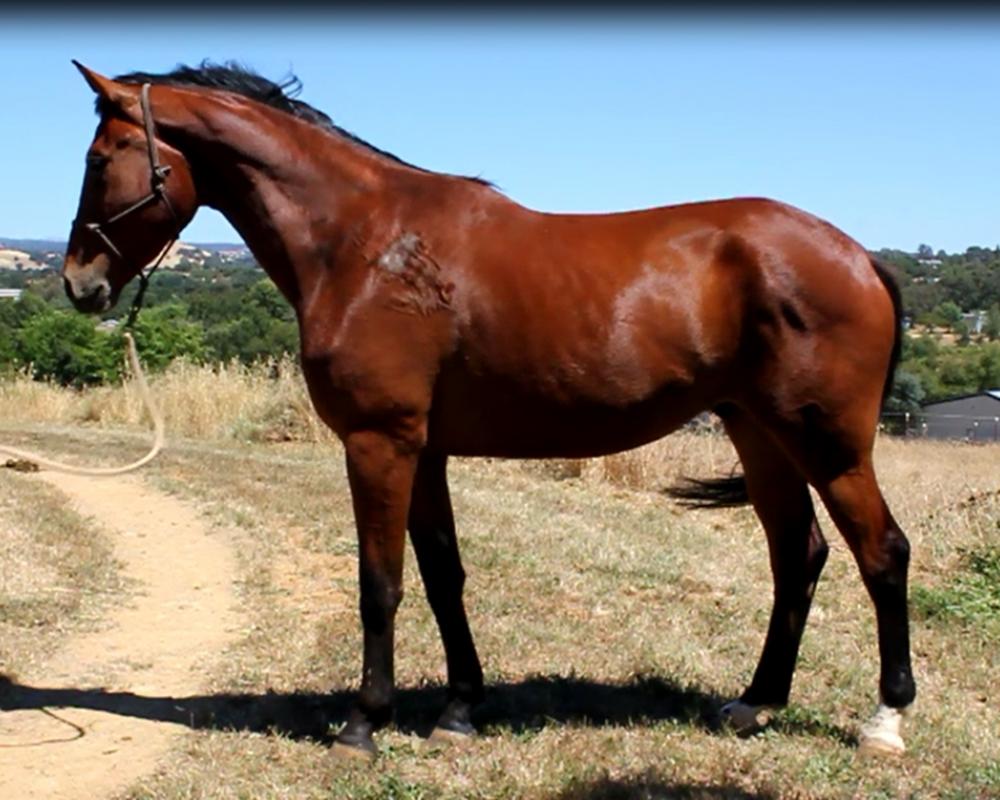 Sweet disposition on this big mover. This very tall gelding ( 17.1 plus) will turn heads in the dressage ring with his movement! He also has nice jump form, so could help you excel in the event field if that's your intent.

Chase is a gentle giant who likes to please. He takes most things in stride; looking to his handler when he is unsure. He is good with his feet for the farrier, trailer loads without a problem, and is good for grooming, clipping and general care. He will always greet you at the gate and looks to be the first one caught!
This relatively plain bay horse will make you look at him once he starts moving! Even at his inspection, the inspector said that he looks like an average horse until he starts moving and then you don't want to take your eyes off of him! Three correct and uphill gaits with lots of natural suspension.

Chase has not been started but has had lots of handling from the ground. He has been handled using natural horsemanship concepts from the moment he was born. I expect that he will do well with someone who is willing to take the time to explain things to him if he gets confused or overwhelmed. Breaking things down into bite sized pieces is what this boy needs to make his start uncomplicated. He wants to please but can get tense if he's confused about what he's being asked. He needs a strong but gentle leader. Take him and start him yourself or with your trainer. Don't worry about trying to UNDO a bad start!

Chase is by Qredit Hilltop, an up and coming dressage stallion. At just 9 years old, he has already been Grand Champion of Dressage at Devon, Champion of his 70-Day Stallion Test (earning ten scores of 9 or higher), Reserve Champion of the USEF Four-Year Old National Championships, and twice has been a USDF Horse of the Year winner. In 2017, Qredit placed 6th at the USEF Developing Grand Prix Championships and won the US Dressage Finals at Intermediate II. Qredit offspring have won at Dressage at Devon, the USDF Breeders Series Championships, and his oldest are now winning under saddle with excellent scores. In 2017, two Qredit daughters finished 5th & 6th at the USDF Region 8 Training Level Championships.

His dam is Akatschi, an imported German Hanoverian who competed successfully in the jumper arena. She comes from old German bloodlines that have influenced the breed over the last 2 decades.

Chase is looking for a focused leader who wants to have a horse that she/he LOVES to be with every day. If you take the time to develop him, he will be your next champion and best friend! If you are interested in hearing more about him, contact me via email or my cell phone.

The second video has footage of his first time through a jump chute.

Radiographs available for review. He is priced reasonably because he unfortunately has a large scar over his left shoulder from a heating pad burn that he got his first week of life when he was undergoing surgery for an umbilical hernia. This is purely cosmetic and is not associated with an injury.