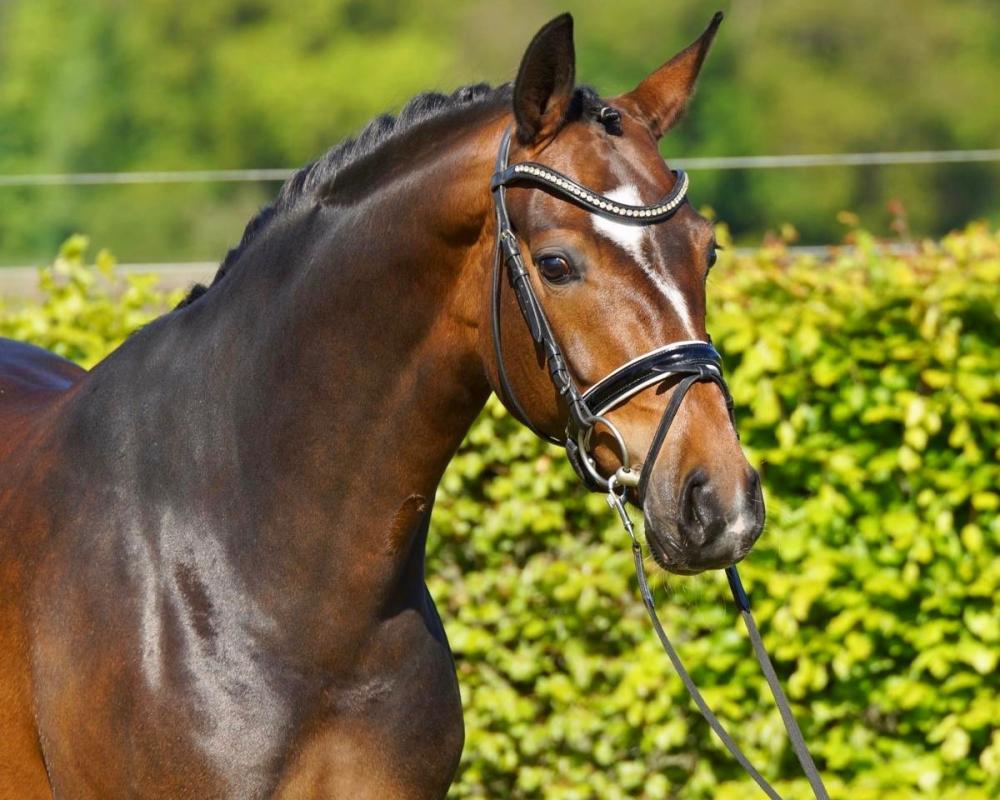 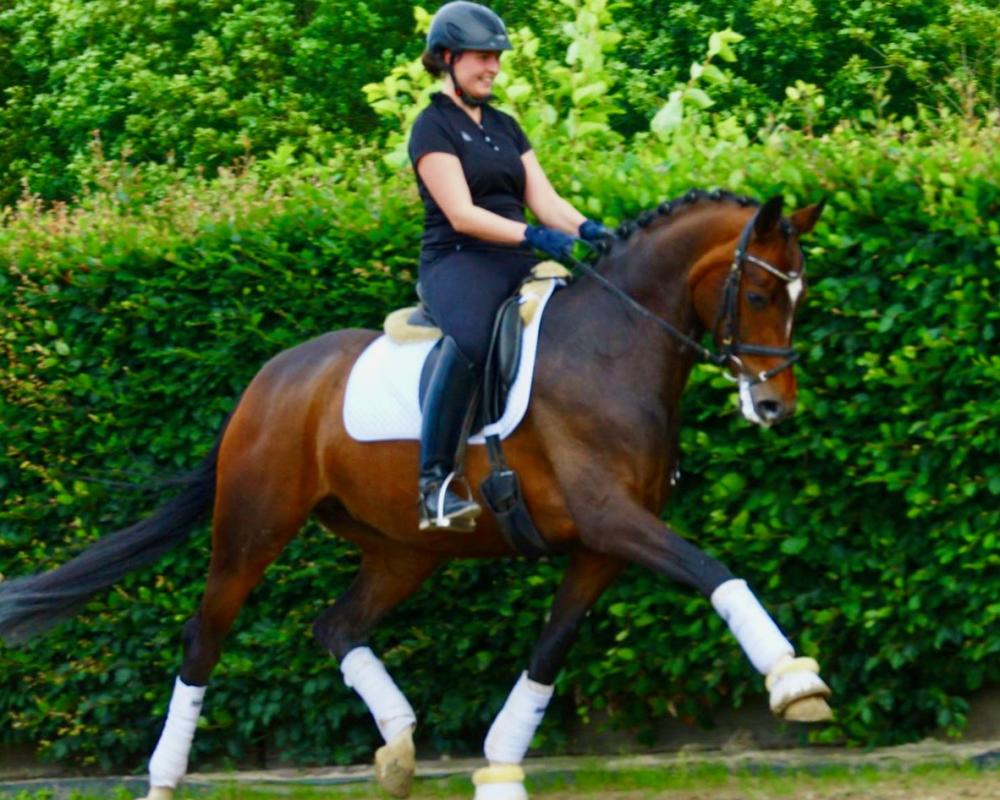 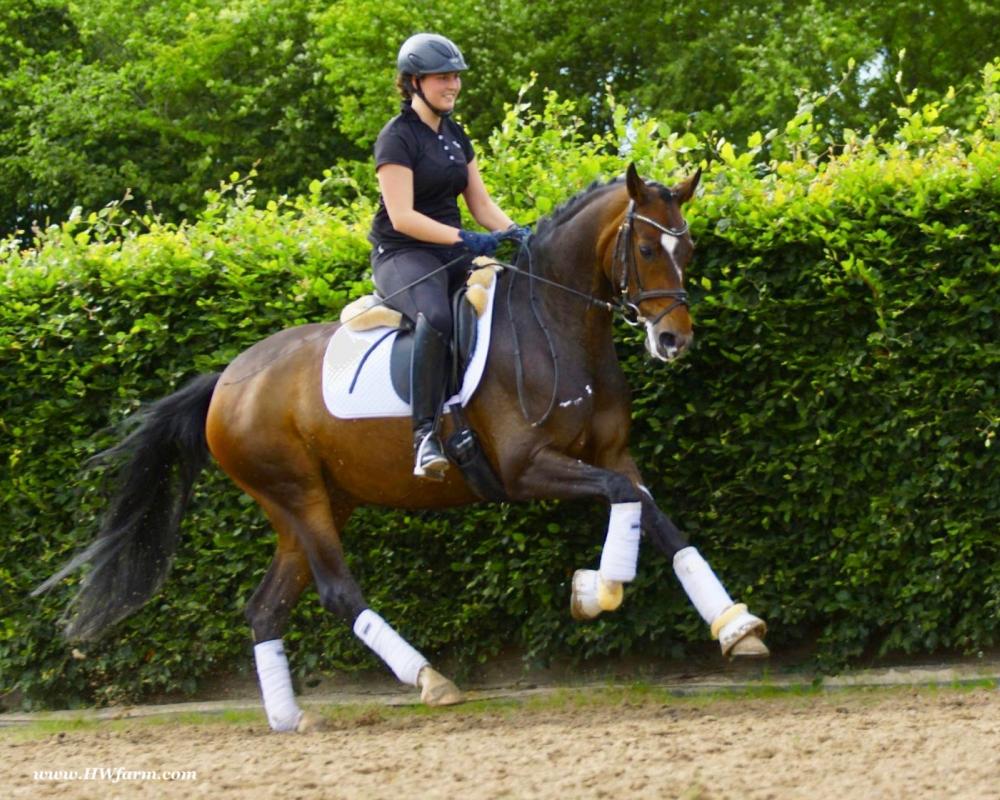 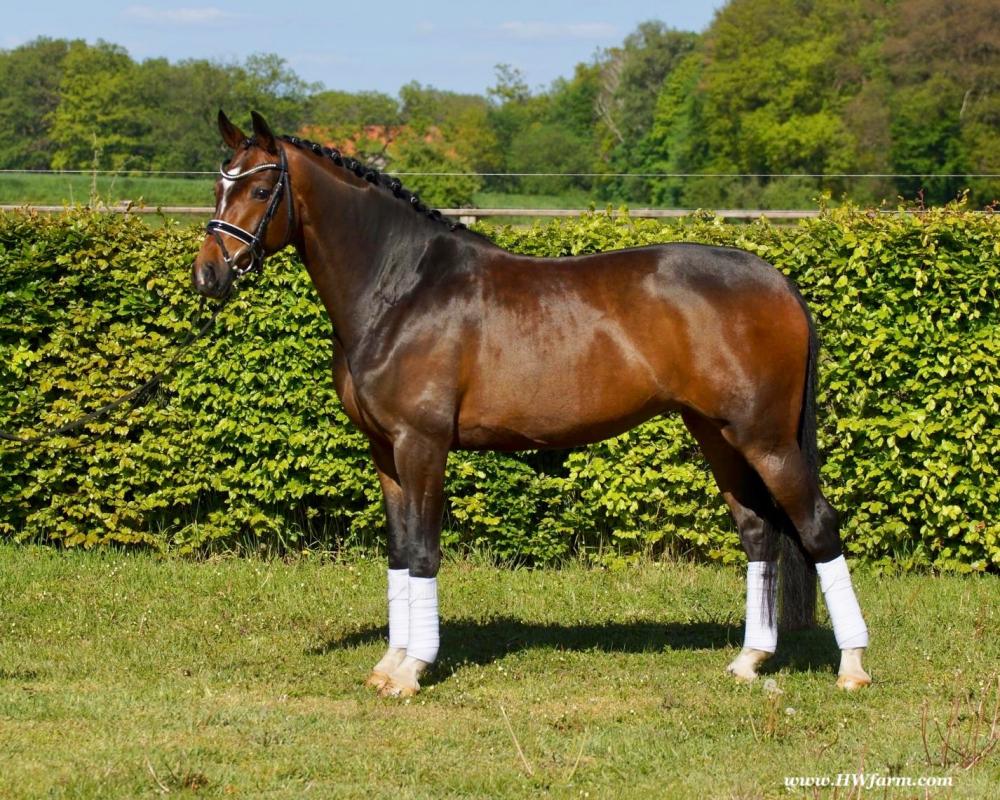 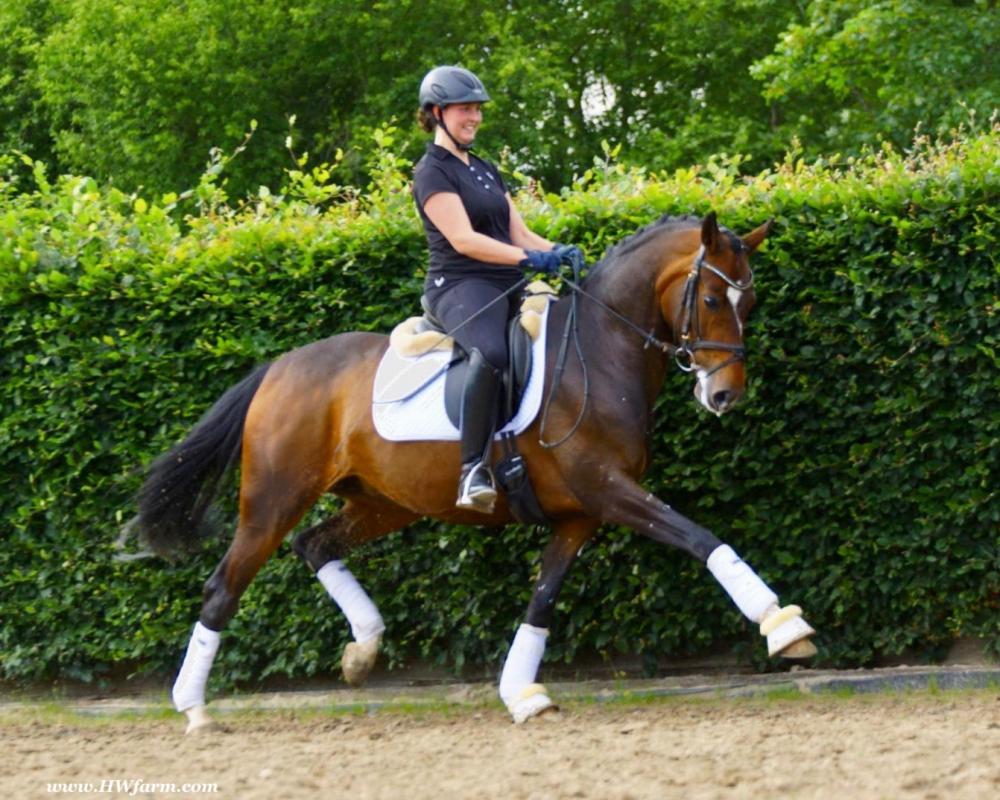 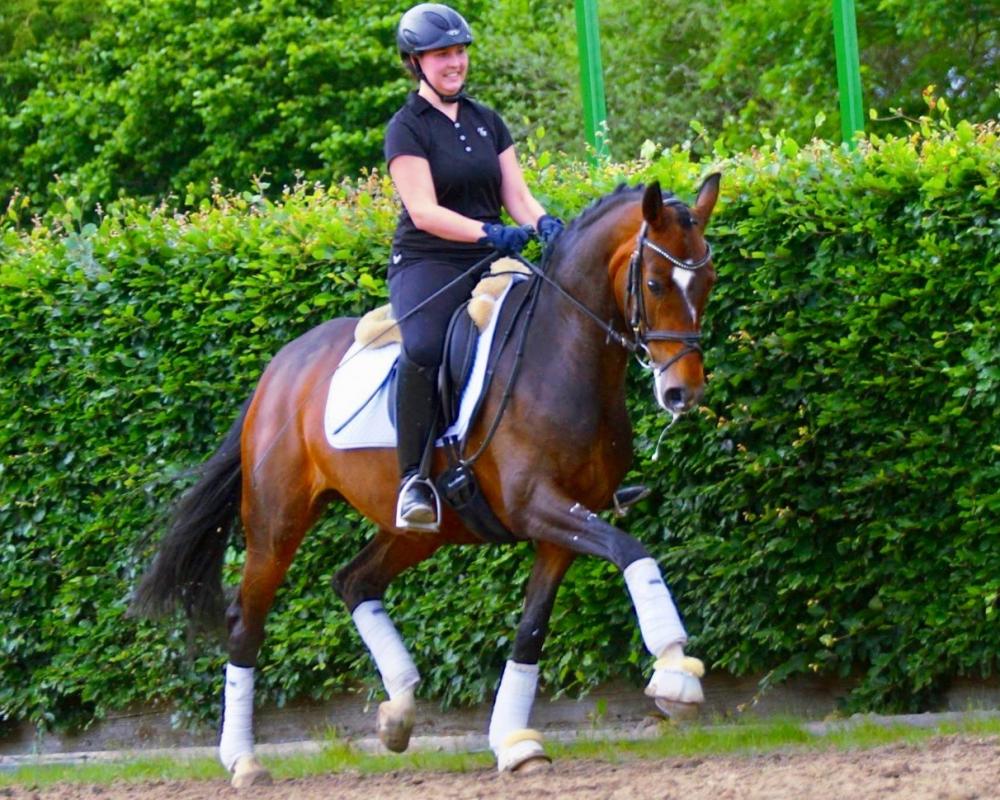 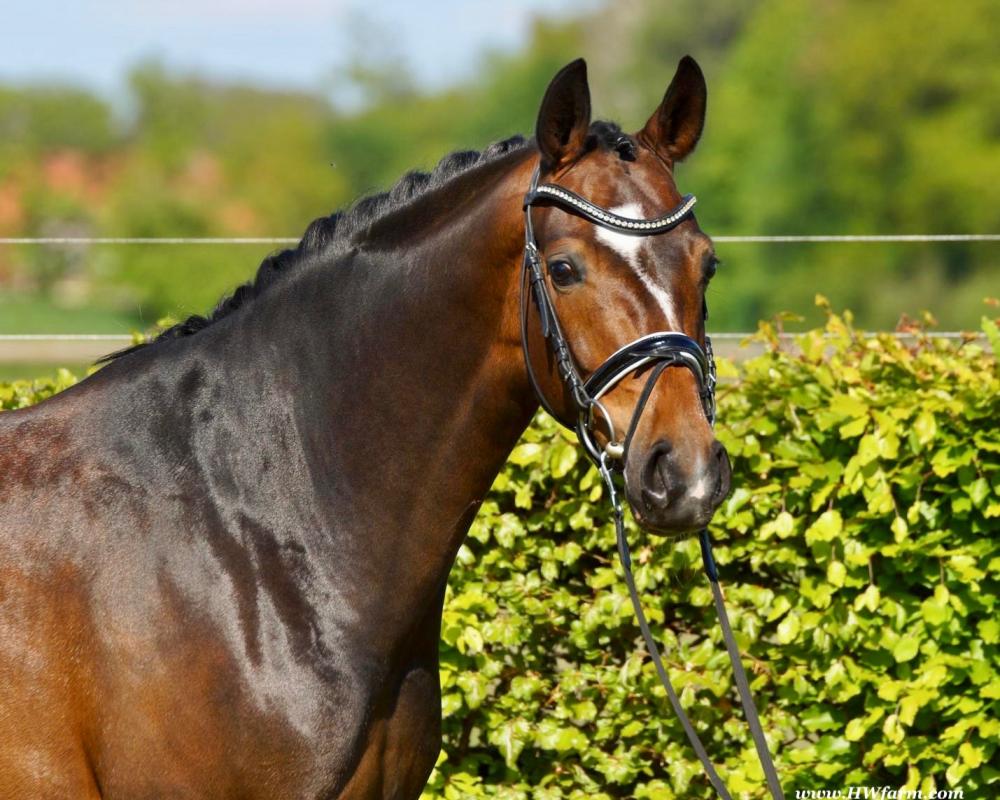 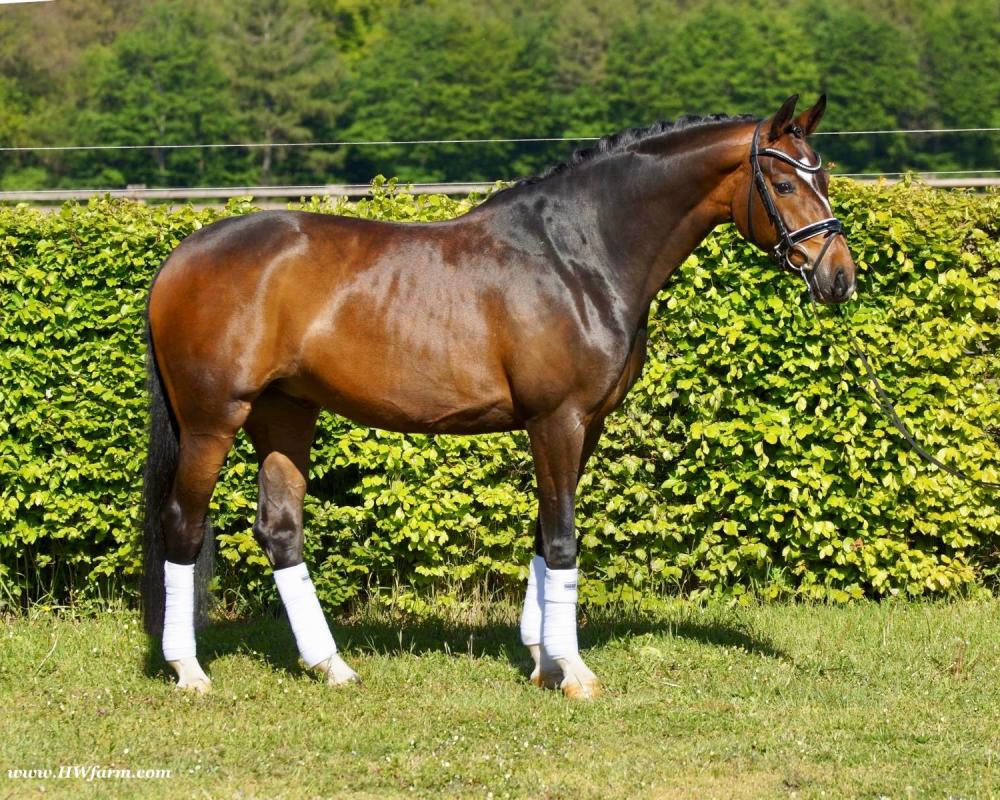 Que Será HW, is by the sensational stallion Quotenkönig, Vice Bundeschampion 2012, Westphalian Champion 2013 and 2014. BundesChampionat 2015, 4th place, WorldChampionship 2015, 8th place in the final round, victories in 3rd and 4th levels, by BundesChampion Quaterback - Fürst Piccolo - Sandro Hit - Contender, who was just licensed for Hanoverian and Oldenburg in Germany.

Quotenkönig was our top pick as a foal, purchased and raised in our German barn, still owned and promoted by us. A top producer with consistent show success, competing against other licensed stallions in big competitions, he shines every time out, no doubt!

Quotenkönig is by the Bundeschampion Quaterback. A breathtaking stallion with phenomenal offspring. Here are just some of the highlights for Quaterback:

This exceptional moving young stallion has already started his winning ways. Paired with the talented young rider, Christian Flamm of Hessen, Quaterback galloped away from the competition at the Bundeschampionate in 2006.

He started his stallion career by being named Champion of his licensing in Neustadt/Dosse in 2005.

Quotenkönig’s dam is “St.Pr.St. Fleet-Street“, 1. Reserve-Champion (Elite) of the mare performance testing in the year 2006 and she participated at the Bundeschampionat as well.

She scored an amazing 8.99 at her performance testing.

She is by the famous Fürst Piccolo, a 100 Day Performance Test Winner! Fürst Piccolo's sire Fidermark was the vice champion of the NRW approvals in 1994 and won the Warendorf state stallion performance test with a big margin in 1995. Further successes followed in 1996. He dominated the "Optimum of Westphalian Riding Horses" sovereignty in Munster . He also became the Buneschampion in his home town of Warendorf . He then went on to win the LVM stallion championship in Munster Handorf. He has had many wins in the Prix St George and Intermediaire I under Marlies Van Baalen and he is trained by Johann Hinnemann. In 2003 he made his debut successfully at Grand Prix.

His first foal crops produced sensational foals. They dominated the Westphalian Foal shows and the NRW elite foal auctions. In 1998 his first approved son Fein Sinn won the 100 day test, the first of several including the impressive moving Fürst Piccolo. He has over 15 licensed sons and many state premium mares to his credit already. He is a sire who will dominate German breeding for many years to come. He is ranked highly on the FN breeding values list. The dam sire Mephistopheles, a son of the Trakehner Mackensen derives from a Romadour II mare, establishing a blood connection to the paternal side via Rheingold. Mephistopheles sired the performance test winner Jacquare. Rembrandt in the third generation was a performance test winner with Trakehner blood.

Fürst Piccolo was a premium stallion at the NRW main approval in 1999 and won the 100 day test in 2000 with high scores. He is an amazing moving stallion and his first few foal crops have dominated the Westphalian elite foal auctions.

Quotenkönig's grand dam is the mother of "Feedback", by Fidertanz, he was the reserve winner of the NRW-stallion licensing 2009.

She scored an amazing 8.06 at her performance testing. Feedback is her son.

After victories in riding horse tests and the Federal Championship qualifying with a score of 8.6, underlined its exceptional quality of Feedback with a superb 30-day test in Neustadt / Dosse. He received the best grade point average of all stallions. The descendants of the second NRW reserve winner in 2009 are eagerly awaited. Fidertanz father, the NRW champion stallion in 2004, presented again in 2010 and numerous top foals approved sons. Feedbacks mother, Conn. Pr.St. Scarlett was first reserve champion mare in her circle, is the parent of the premium stallion Fiderhit, the champion mare St.Pr.St. Fleet Street and many winning foals. Dam's sire Sandro Hit was Bundes champion six-year old and World champion of the young horses. Among the best known children of the stallion are the champion stallion Sir Donnerhall as well as the record mare Poetin. The Contender-Holstein and Landgraf lines round out the third and fourth generation of the pedigree.

Quotenkönig (King of hearts!) is a picture perfect and absolutely stunning young stallion. He was the favorite of the NRW stallion licensing auditions, 2011. Superb gentleman with 3 above average gaits. He impressed everybody with his cat like movement, super free shoulder and unbelievable active hind end. He is one of a kind in movement, dynamic, charm and esprit. He was the reserve winner of the licensing.

All of these phenomenal genes, leading to no other result, as Quotenkönig to be one of the top stallions these days. He also won the Bundeschampion Qualification in Coesfeld-Lette, 5yo horses, with Lisa Neukäter in the saddle and a score of 8,4 and followed up with the victory for Westphalian Champion in 2014!

Sire of World Champions, Winners of the Bundeschampionship,

Hero and producer of champions of historic uniqueness. If one wanted to put together all the heredity highlights for Sir Donnerhall I, one would need to write a whole book. For years, he has dominated the Bundeschampionship as no sire has done before him: in 2014 the daughter Special Diva OLD won the Bundeschampionship of three year old mares and geldings, prior to that she became Oldenburger Vice-Landeschampionesse. The licensed son Sir Heinrich dominated the scene of the five year old dressage horses. In 2012 and 2013, his son Sa Coeur was World Champion of the young dressage horses in Verden and top horse at the PSI auction in Ankum. Sir Donnerhall´s progeny are always sought after. For years Sir Donnerhall I was one of the most successful sires of auction horses and continuous producer of top horses achieving 6 digit prices. His progeny impress again and again with their great style, a modern type and subtle movements. The FN breeding value association ranks Sir Donnerhall I, who has himself been trained up to Grand Prix, as one of the best sires of dressage horses. He was second reserve champion at his licensing, stallion performance test winner, Ia main premium sire in 2005 and in 2006 Bundeschampion as well as vice World Champion of five year old dressage horses. He quickly turned out to be a foundation stallion: he has sired 89 licensed sons so far, among them the NRW champion stallion and vice Bundeschampion Silbermond, the champion stallions of the South German licensing Sir Nymphenburg I and Sir Schiwago as well as numerous premium sires at all German licensing locations. The premium sire Santo Dottore was Reitpferde Champion of the three year old Oldenburg stallions in 2014. More than 80 daughters were awarded the predicate ´state premium`. The daughter Assandra was honoured as best three year old mare in Austria in 2011.

Sir Donnerhall: one of the surest bets among German dressage horse producers

Beautiful in and outside with three rhythmic, big, expressive gaits.
She is fabulous and easy to ride, light in the bridle and super nice to sit.

Que Será HW, equipped with phenomenal competition genes, is a horse of amazing quality and super fancy mover who knows to impress due to her type and work ethic. This stunning horse has it all.
She has a super nice, chiseled head, big stallion neck (even as a girl!).
A dream come true.

Lofty movement and her hooves barley touch the ground.
She loves to please her handler and rider and is a fast learner.
This lady eagerly works under saddle and loves her job.
She is breathtaking to watch in the dressage arena and with her quick,
far reaching hind leg, passage and piaffe will come naturally to her.
She’s supple and has a ton of air time. She just floats above the ground.
With her free shoulder and huge suspension,
she swings nicely through her back.
This extremely talented mare has international potential.
The great ride ability, makes a lasting impression on whom ever sees her, everything looks just pleasant and easy.
She loves her personal grooming time and puts her head right in your lap, striving for attention and searching for treats.

With this horse, you will be the star in FEI classes and at clinics, the judges and onlookers will remember her where ever she goes.
Her bloodlines are very much sought after, she is your ticket to the top!

Que Será HW is used to go in the hot walker, loves her shower and solarium time. Stands for the farrier, loads and appreciates grooming time.
She is a great Young Horse Candidate, just what the judges are looking for and will make her way up the levels.

Priced including import and quarantine to NY, check out her video clip!!!
Please contact Irene: [email protected]
239-772-7722 (ask for Irene, managing member, HorseSales LLC)
We take pride in answering every e-mail right away (at least at the same day) and to return each call. If you don't get a reply - please try again, our spam filter might have gotten in the way?!
Please find all info and other hand selected, top quality horses at www.HWfarm.com