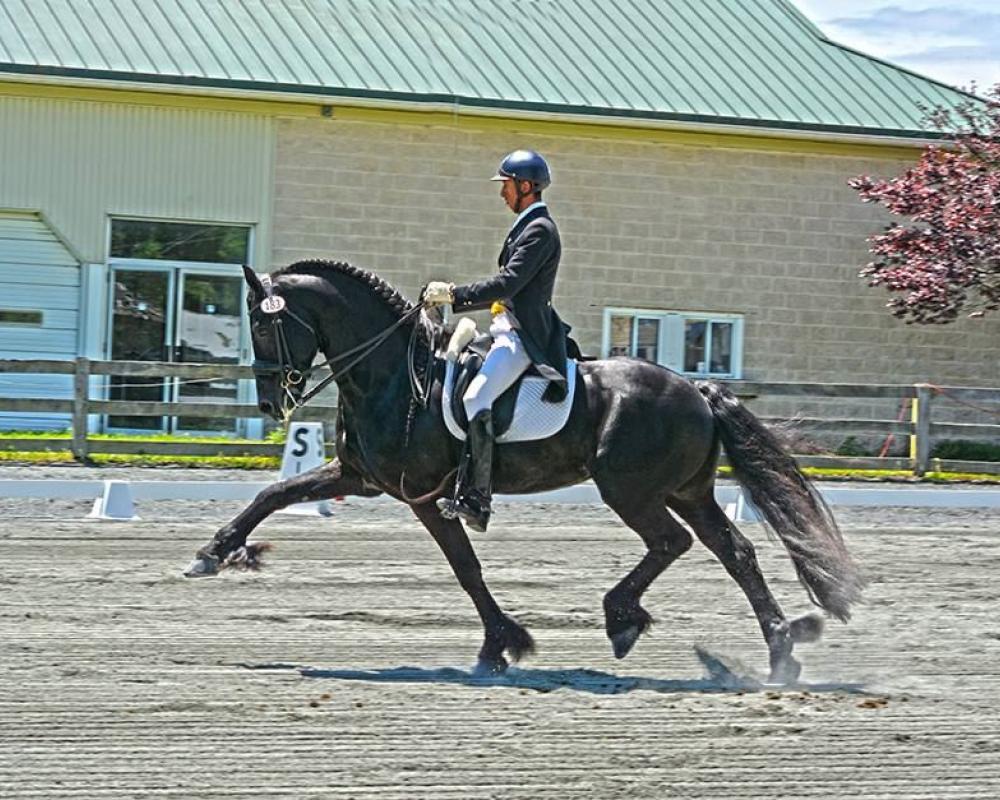 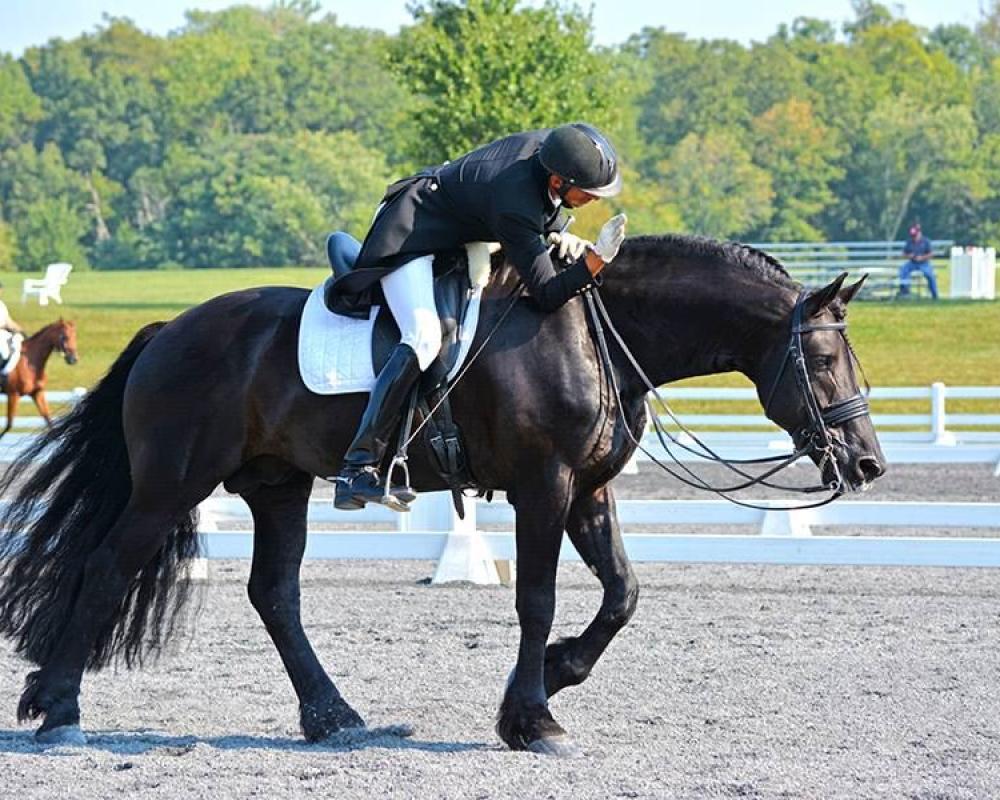 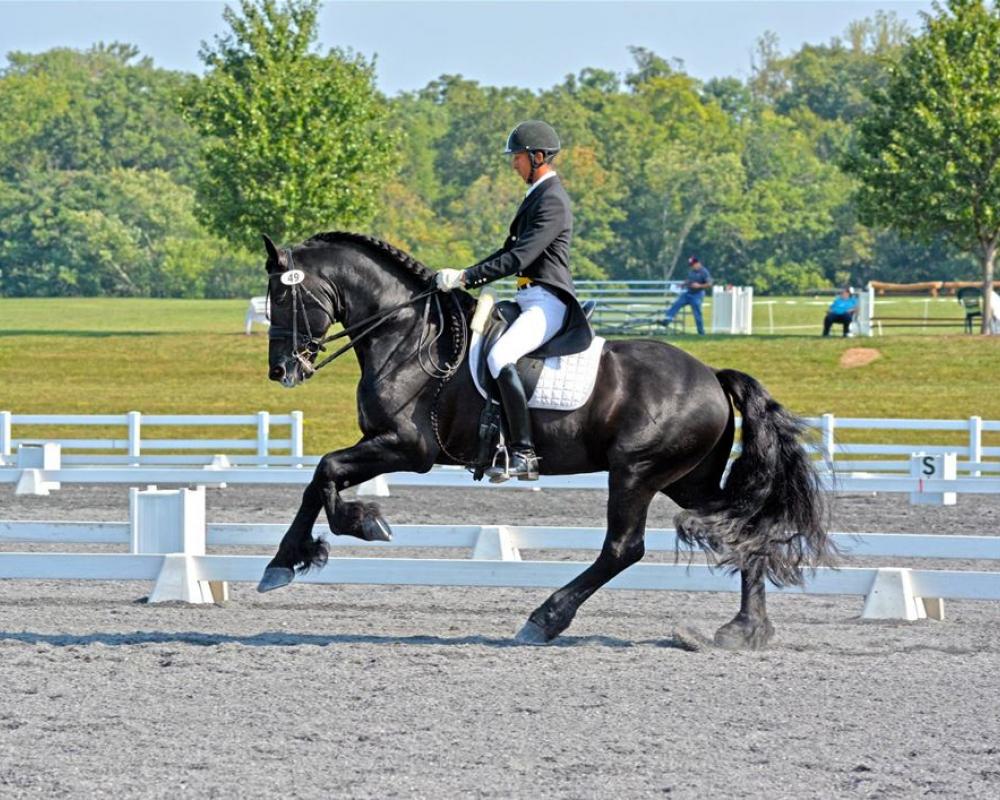 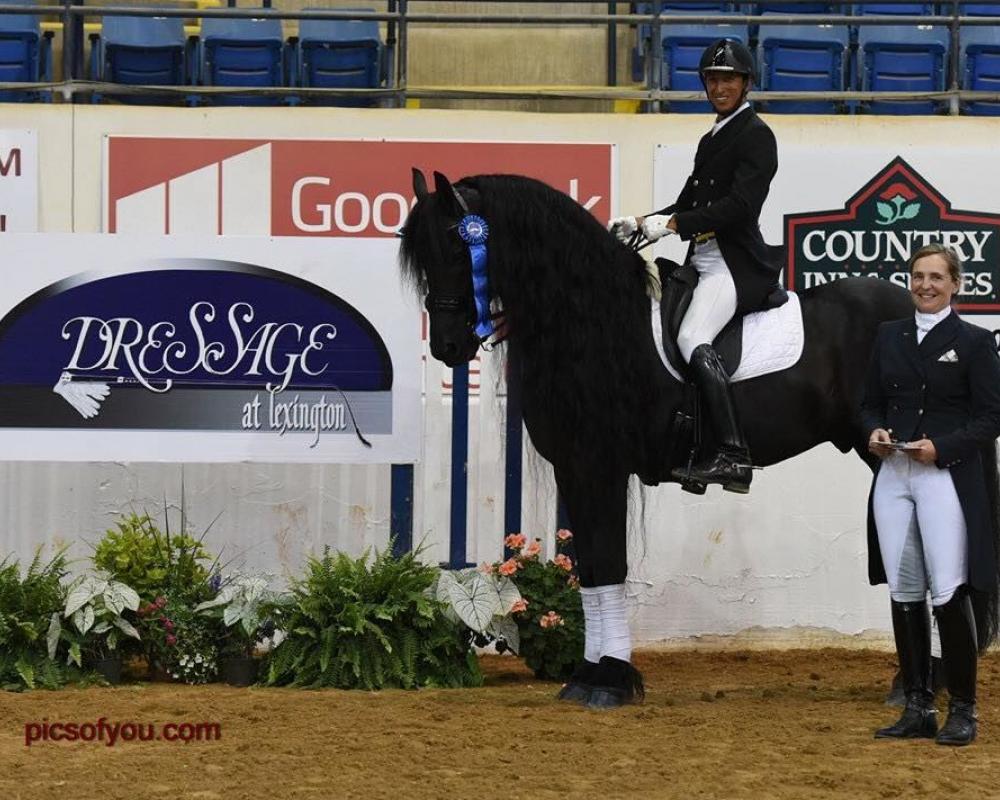 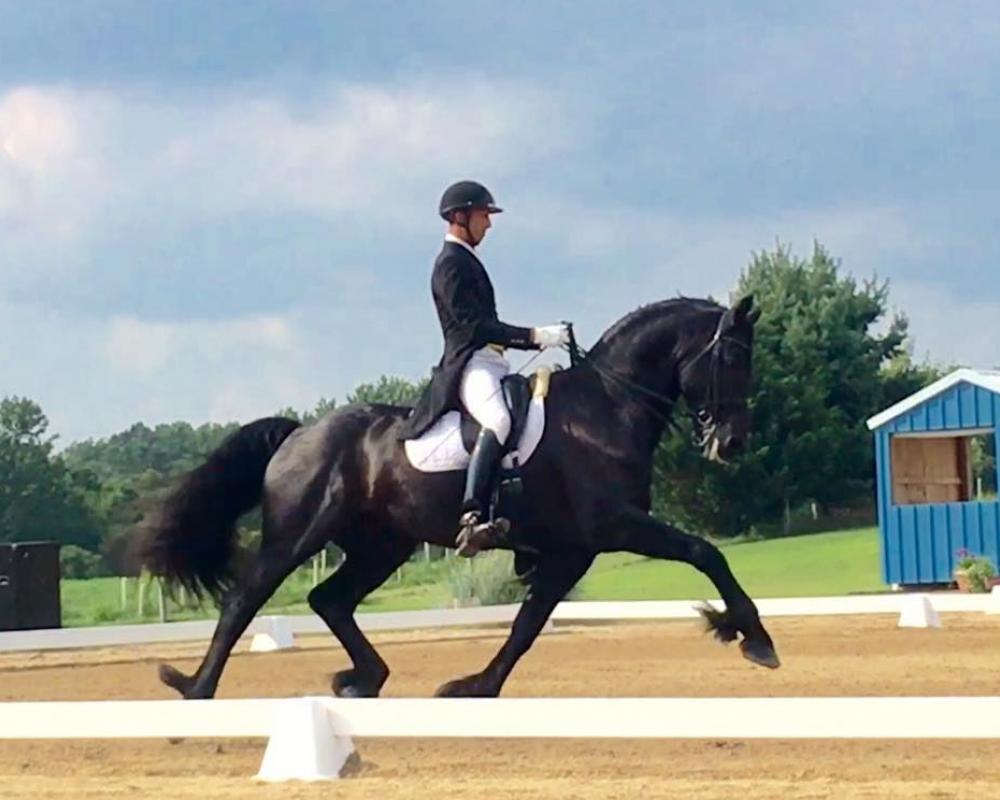 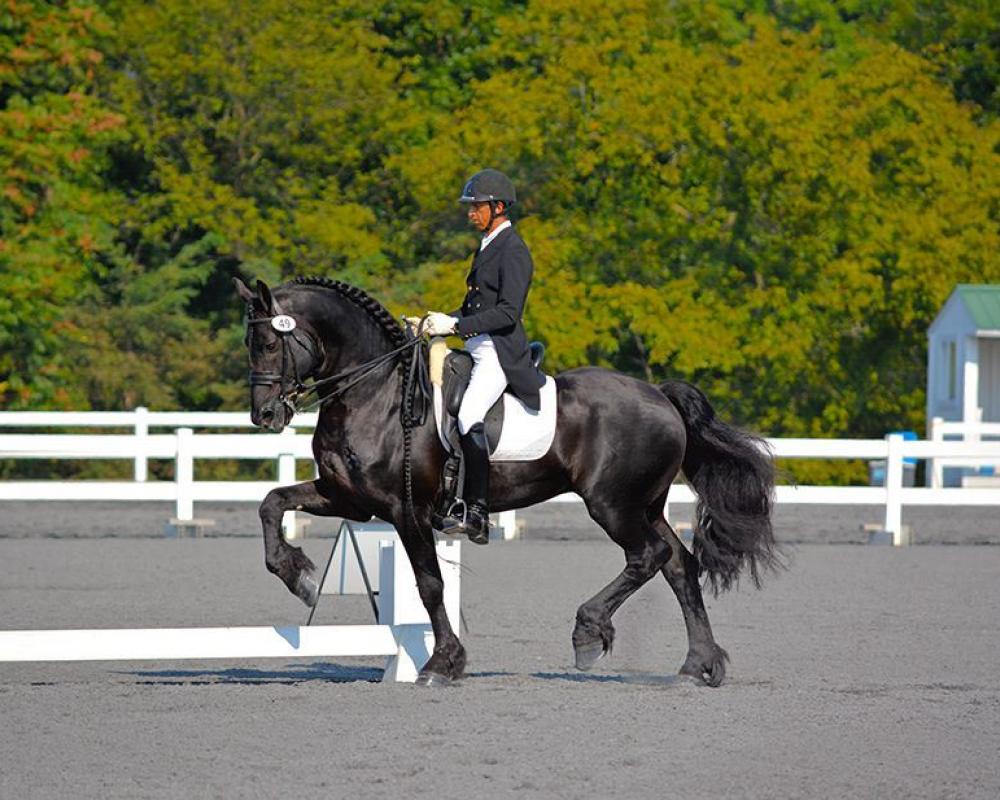 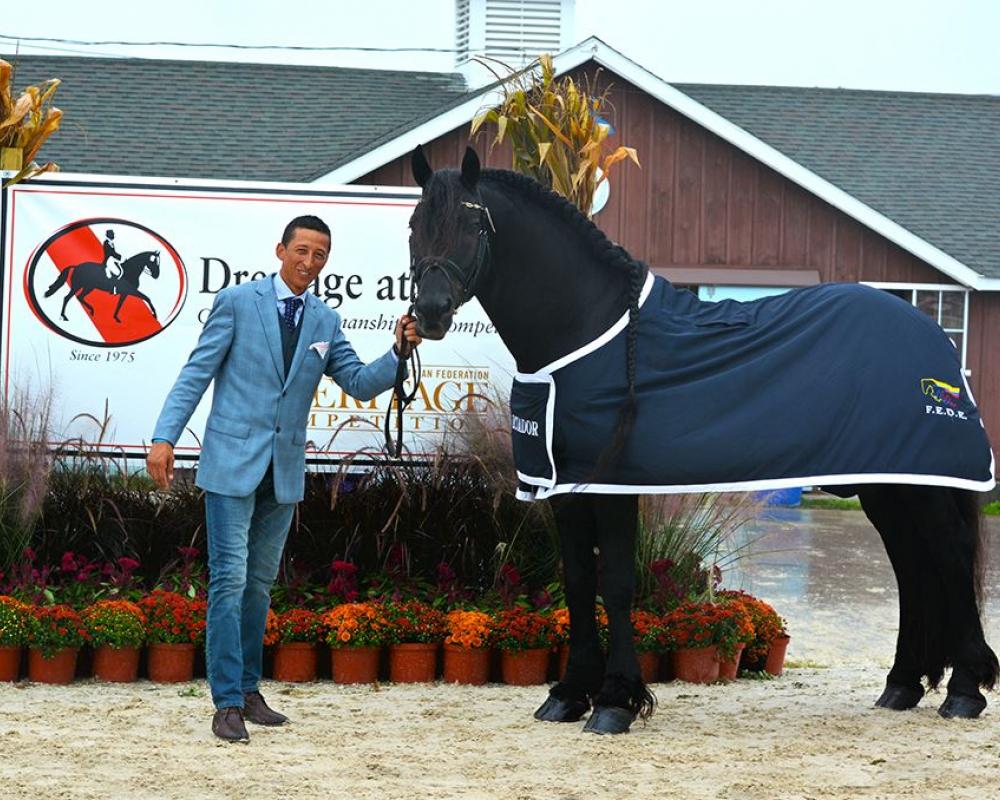 Reinder fan Wifo, or Reign, as we call him... is a 2005 KFPS Friesian Ster Stallion. He is as sweet as can be and although has the presence of a majestic Stallion he has a gelding puppydog like personality. Anyone can handle him and he has wonderful ground manners. Reign is very comfortable to ride and is quiet enough to be ridden by an Amateur, JR/YR but also competitive and fun enough for the professional.

Reign has an in your pocket type personality. He stands quietly in the cross ties, is great for the farrier and vet, travels wonderfully and does great both in the stall or pasture - he currently goes out half a day and is in half a day.

Reign is a horse ready to take you to get your Bronze and Silver Medals. He is uncomplicated and loves to be in the ring.

Reign has had a very impressive show career through Intermediare 1 and is nearly ready for Grand Prix. His piaffe and passage is wonderful !

He also has a recent set of X-rays.

We are also only 10 minutes away from the Tryon International Equestrian Center home of the 2018 World Equestrian Games !

Dressage at Lexington 2016 - Champion Musical Freestyle - 78% !!! This earned him the highest freestyle score of the whole weekend of over 36 MFS rides !!
Reserve Champion Intermediare 1 Challenge - 2nd out of 11 entries with a 73.289% !

PVDA Spring Show 2016 - FEI High Score Champion with his 74.342% at Intermediare 1. He received seventeen 8's throughout the weekend and three 8.5's for his canter pirouettes and his centerline halt salute ! Judge's comments were : "Quite Complete for this level.... Well ridden...Willing.. Attentive...Balanced..."

Julio Mendoza is an FEI International Trainer and Instructor, a USDF Bronze, Silver and Gold Medalist, 2018 World Equestrian Games Competitor, Two Time Pan American Rider, 2017 Triple Gold Medalist at the Boliavarian Games in Bogota Colombia and is proud to be based in North Carolina only 10 minutes away from the Tryon International Equestrian Center. Julio and his wife Jessica, officially started their business together in 2006. Julio has been training horses for over 30 + years in Dressage. Julio specializes in long lining, and piaffe and passage work he has trained and successfully competed several horses and students up to Grand Prix Level.
Email Seller Now
Visit Seller Website
More Horses From Seller