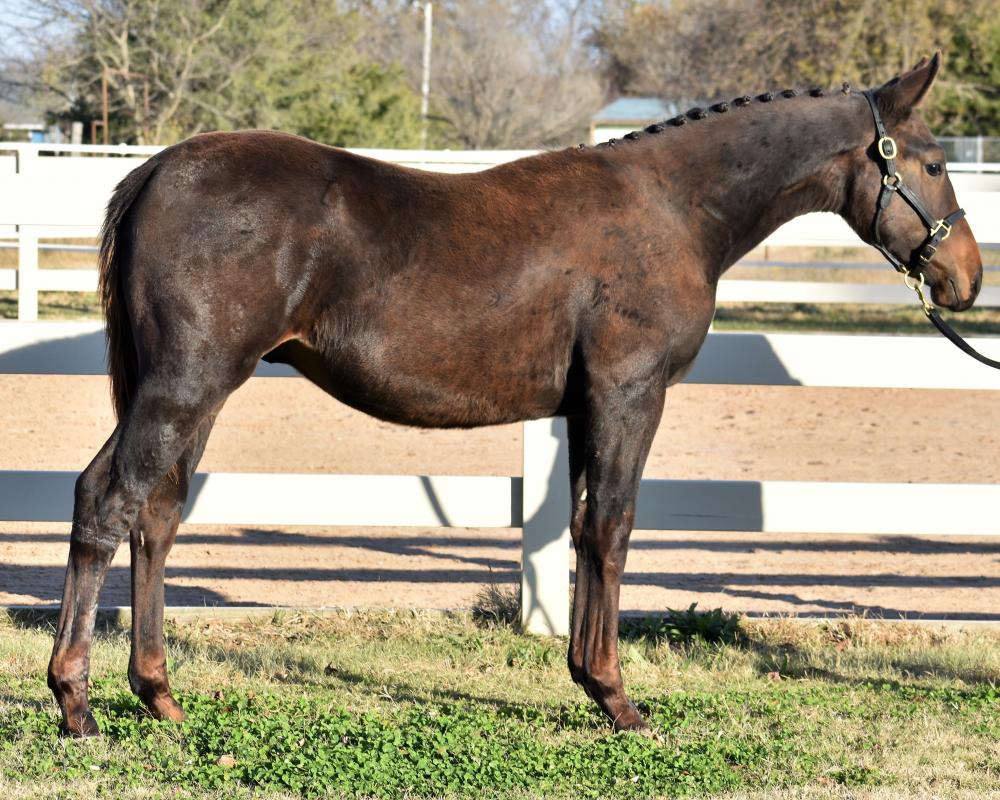 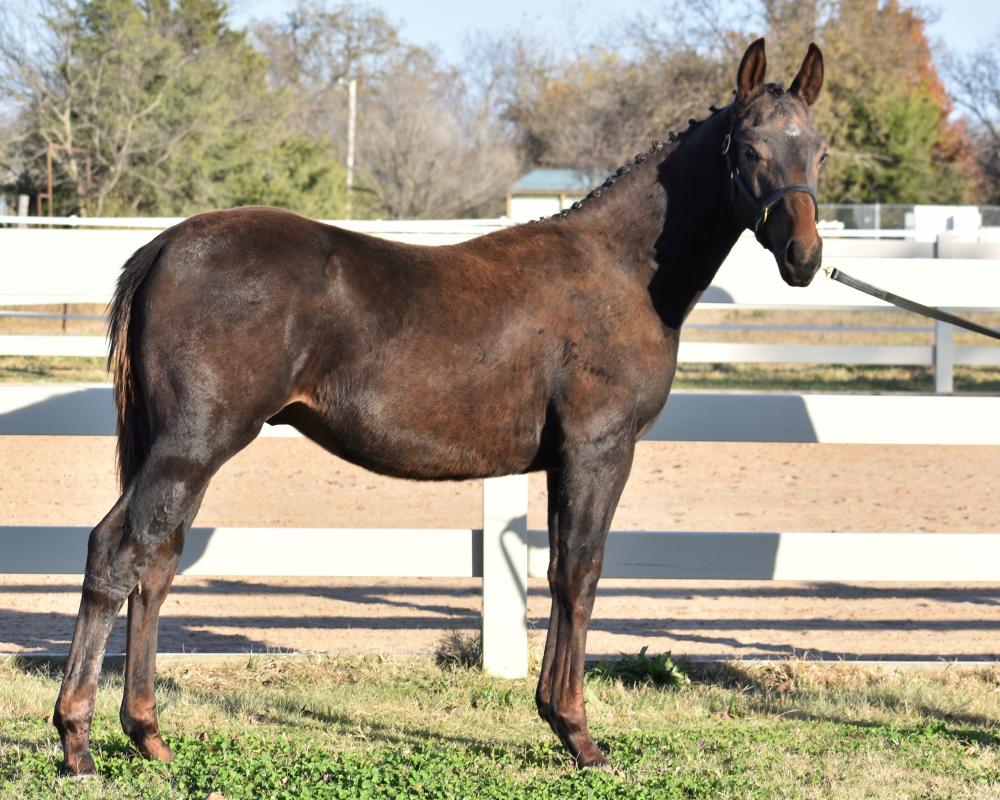 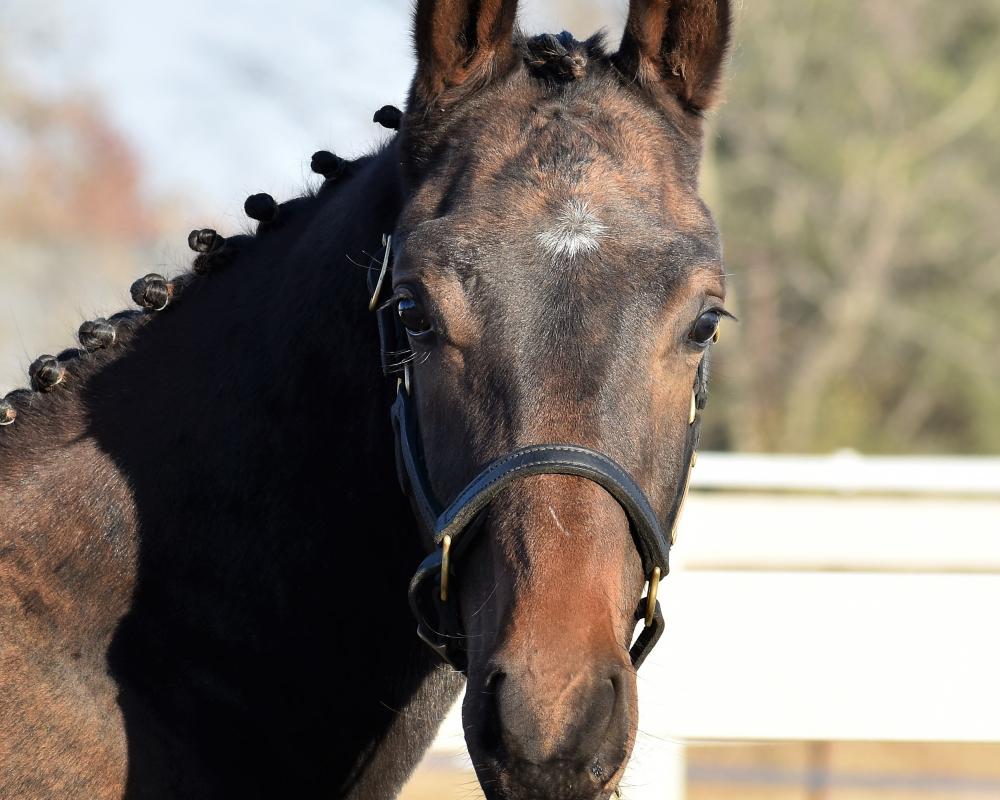 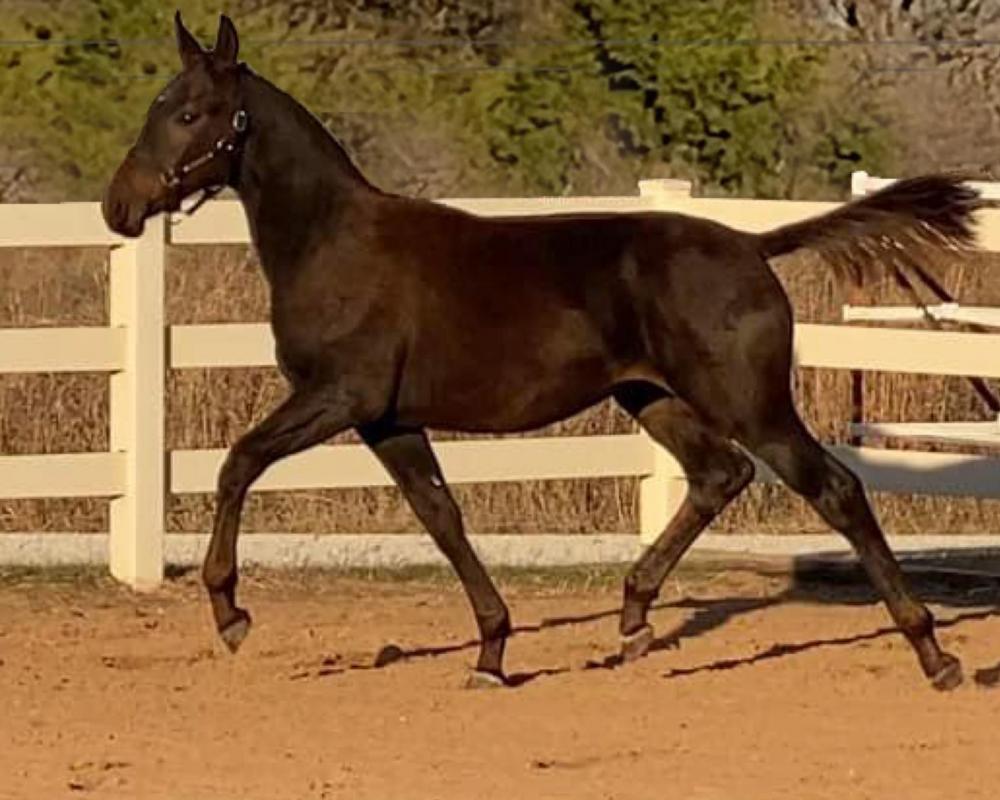 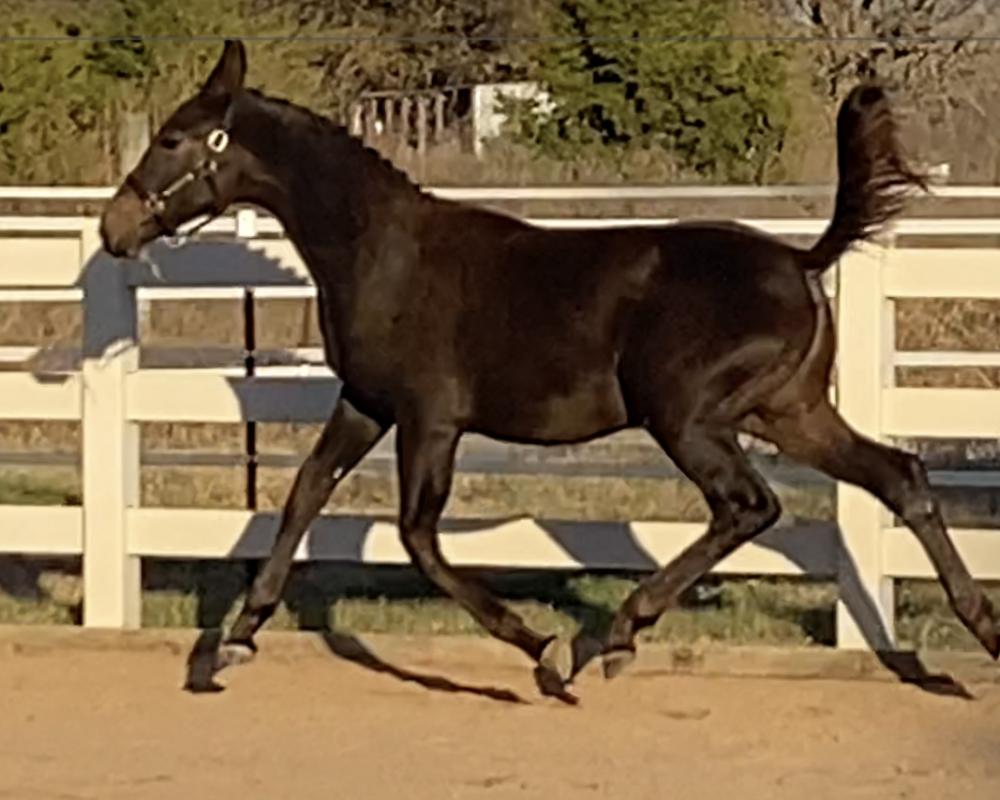 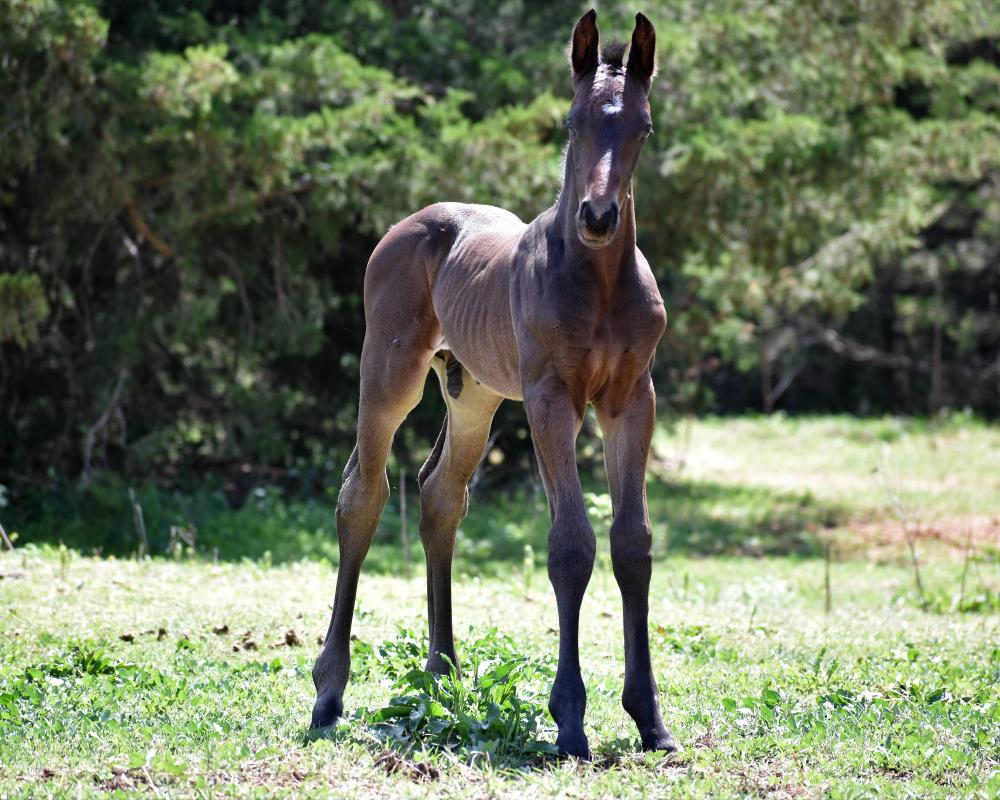 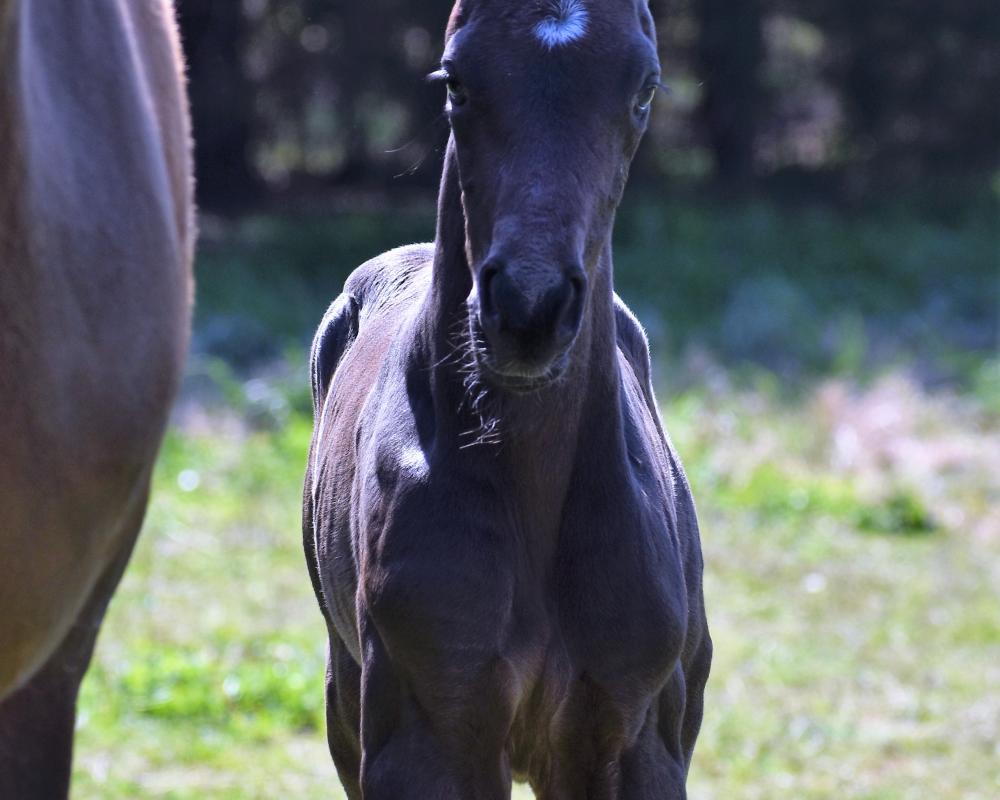 This colt has the "WOW" factor! Beautiful long legs, gorgeous head, will be tall, dark and handsome! Bred to excel in the dressage arena! Born 3/31/2021.

Rockefeller is the sire of Rockson, winner of the Danish Equestrian Federation’s championship for 4-year old dressage horses in 2015, he is also the sire of approved stallion DORTHEASMINDES ROCKEY

Rohdiamant, being of ´noble birth´, is a descendant of the most successful dressage bloodlines in the world and was destined for stardom. After winning the approvals in 1992, Rohdiamant won the Oldenburg Riding Horse championships in Rastede in 1993 and became a Federal champion at Mannheim and runner-up in the stallion performance test. In 1994 he won 6 novice and elementary dressage tests in 6 starts.He was champion dressage horse of his generation in Oldenburg and main premium stallion in 1994.Rohdiamant three times received the score of 10.00 from extraneous riders, becoming the sensational unequivocal winner in the dressage index with a score of 150.01 points. The dark tan horse left no doubts as to his class at the federal championship of three-year olds, becoming champion under Martina Hannöver. Rohdiamant now belongs to the illustrious top ten of the world‘s best dressage-makers where his sire Rubinstein has been listed for many years. Rohdiamant is the sire of 45 licensed sons, including the Champion Stallions Ron William, Rhodon, Rosenberg (GBR) and Blue Hors Romanov (DEN). The latter was awarded the VTV sport stallion title in 2008 just like his full brother Rubin-Royal a year earlier in 2007.

Dam: Flame Dancer, known on our farm as "Fantasia" is one of our foundation broodmares. She is by Elite Hanoverian Stallion Fabuleux, and out of a Graf Goetz mare. Fantasia is in the Main Mare Books with both the American Hanoverian Society and the Oldenburg Horse Breeders Society (GOV). Fantasia is 16.1H, dark bay with a beautiful head. She passes on her wonderful temperament, uphill movement, great hind leg, and that classic rocking horse canter that Fabuleux offspring are known for. In 2018, she produced a beautiful dark bay (almost black) colt by Supremat OLD (Sandro Hit/Rubinstein I) who was named premium foal and stallion prospect at his Oldenburg inspection!

Her sire, ES Fabuleux, a Class I Stallion, successfully completed his 100-Day Test in Adelheidsdorf, where his exceptional scores included Walk 9, Trot 9, Canter 10, Temperament 9, Rideability 9, Willingness to Work 9. He received the outstanding dressage score of 130.45 points. Fabuleux has sired dozens of top foals and premium foals. They have won numerous Get of Sire classes at major shows in North America. He has sired numerous Elite Mare Candidates, High Scoring Mares, and Top AHS Inspection Tour Mares. Fabuleux is from a rare damline illustrating 7 direct generations of SPS/Elite Mares.

Her damsire, Graf Goetz, was the famous chestnut stallion who captured the hearts of dressage fans in the early 90's under trainer Steven Wolgemuth. The pair were elected most successful AHSA competitors in 1990, were long listed with the USET in 1992 after winning their first 6 Grand Prix's and in 1993 were the 4th highest ranking combination in the US coming into the tryouts for the North American Championships. Graf Goetz produced many amateur horses throughout the United States who typically had his large, expressive eye, superb walk, and affectionate and outgoing personality. His handsome presence has been used for artist sketches, paintings, and even a popular dressage license plate. Graf Goetz made himself an outstanding career in the US, trained and ridden by Steven Wolgemuth. Since his pedigree is more directed to the jumper division, Steven and Graf Goetz have proven that rideability and athletic ability are the foundation of any kind of training in any discipline.

This colt will likely mature to 16.2h. Payment terms available through weaning with a signed contract. Visit www.nextlevelsporthorses.com for more information, and continue to check back for updated photos and videos as he grows! Price includes registration, inspection, and branding with the American Rhineland Studbook (ARS), inspection fees, microchipping, all vaccines, and board through weaning.