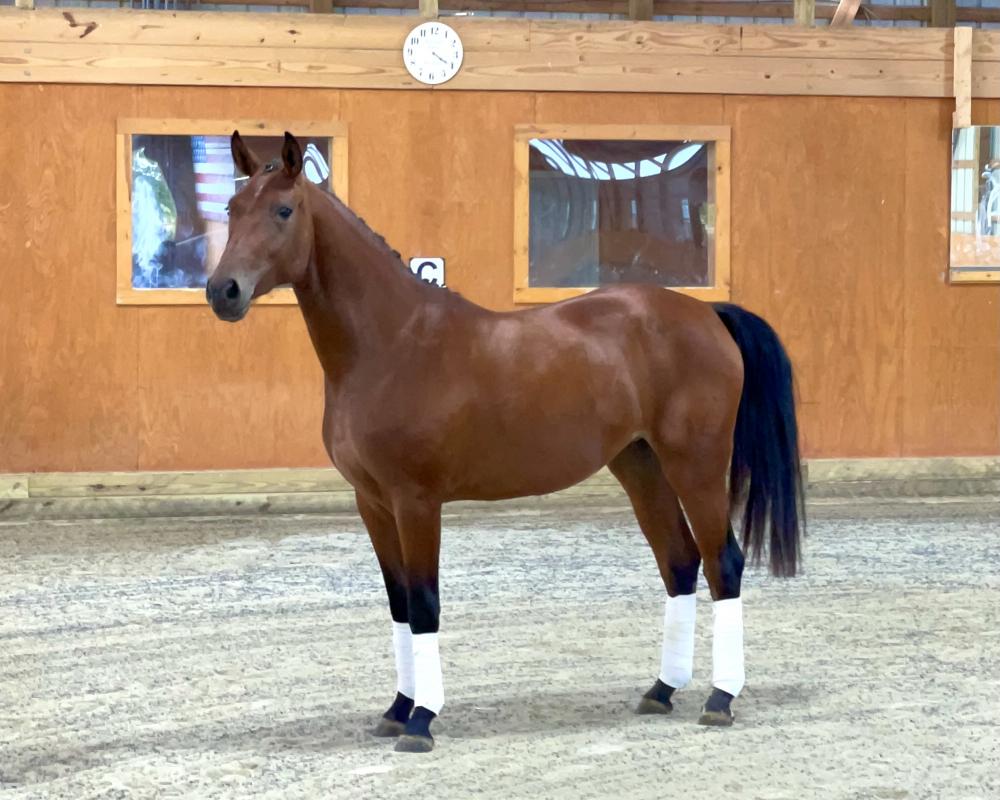 This coming three year old has such an AMAZING brain, definitely going to be someone’s dream horse!

Rhea is a smart, sweet, well mannered two year old who has an old soul. She loads, bathes, vacuums, and is a completely mature lady about everything! She will be one that can be brought along by a competent AA. Her fabulous brain, combined with a clear walk, extremely cadenced trot, and crisp canter make this a filly that can will someone’s dreams a reality. I am completely comfortable letting anyone handle her, and I’m sure after a proper starting she will be the same to ride.

To give an idea of how quiet she is. The free moving video was taken on the first time she had been to this barn, and her trips off property can be counted on one hand. She traveled like a professional, unloaded and stood in the cross ties to get shined up and her braids; she was complete lady about the whole process. I know some big show horses who are not half as good as this little girl!

Rhea will be professionally started come spring. This is your last chance to grab a super prospect before her price increases!

Her sire, Rascalino, who is by the most admired stallion Rotspon, placed first in his performance test out of 31 stallions in 2004. He scored 8 for character, 8 temperament, 8 willingness, 8 conformation, 10 for trot, 9 canter, 9 walk, 9 rideability. Rascalino completed the dressage portion of his Adelheidsdorf performance test with the knockout score of 153.37. This score was good enough to make him the winner of the test, with the score of 103.56 on the jumping portion. In 2007 Rascalino represented Germany at the World Young Horse Championships, where he landed 4th place. Four weeks later he was 13th at the 2007 Bundeschampionate for 6-year olds.
https://ihb.com.au/product/rascalino/

Rhea’s dam’s sire, Fürst Romancier, sired the champion stallion of the Oldenburg licensing, For Romance, as well as another premium stallion, Fürstenstein. Fürst Romancier himself was main premium winner and came the most successful stallion in his age group at the World Championship for Five-Year-Old Dressage Horses in 2009. In his stallion performance test, he has received top scores all higher than 9.0 for his basic gaits as well as 9.0 and 9.5 for rideability. Fürst Romancier originates from the valuable dam line of Edoste represented by Bundeschampion and competitor of the European Championship Exupéry, vice Bundeschampion Landjuwel Gold, Olympic horse Petit Prince and Grand Prix winner Avignon.