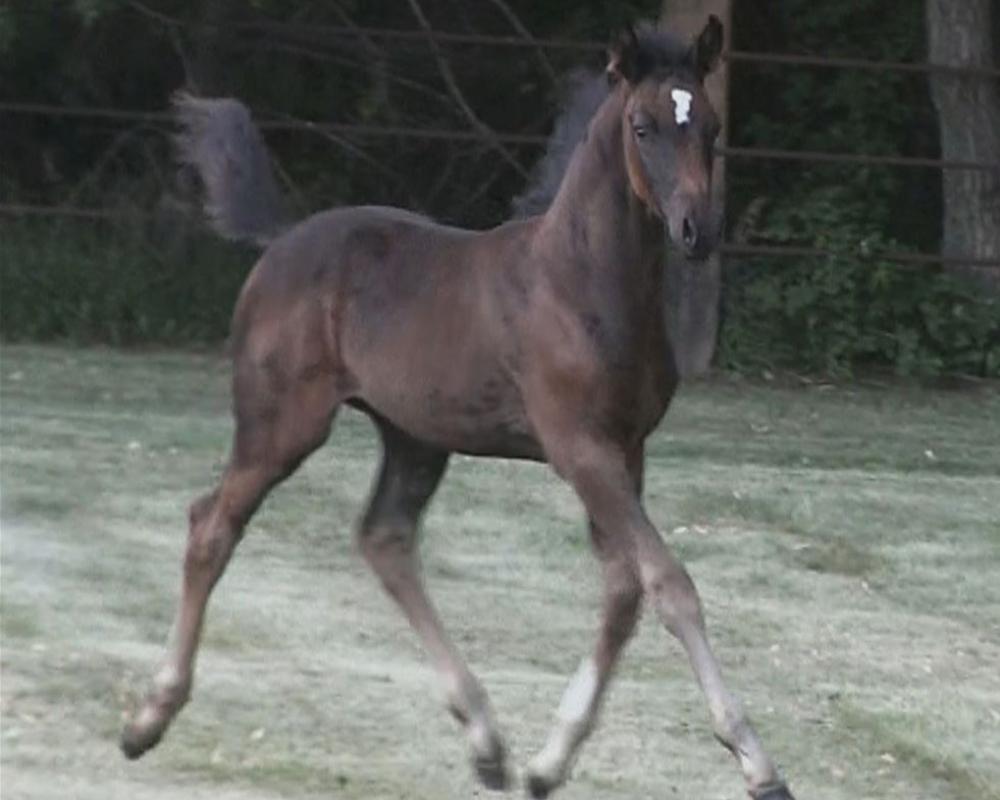 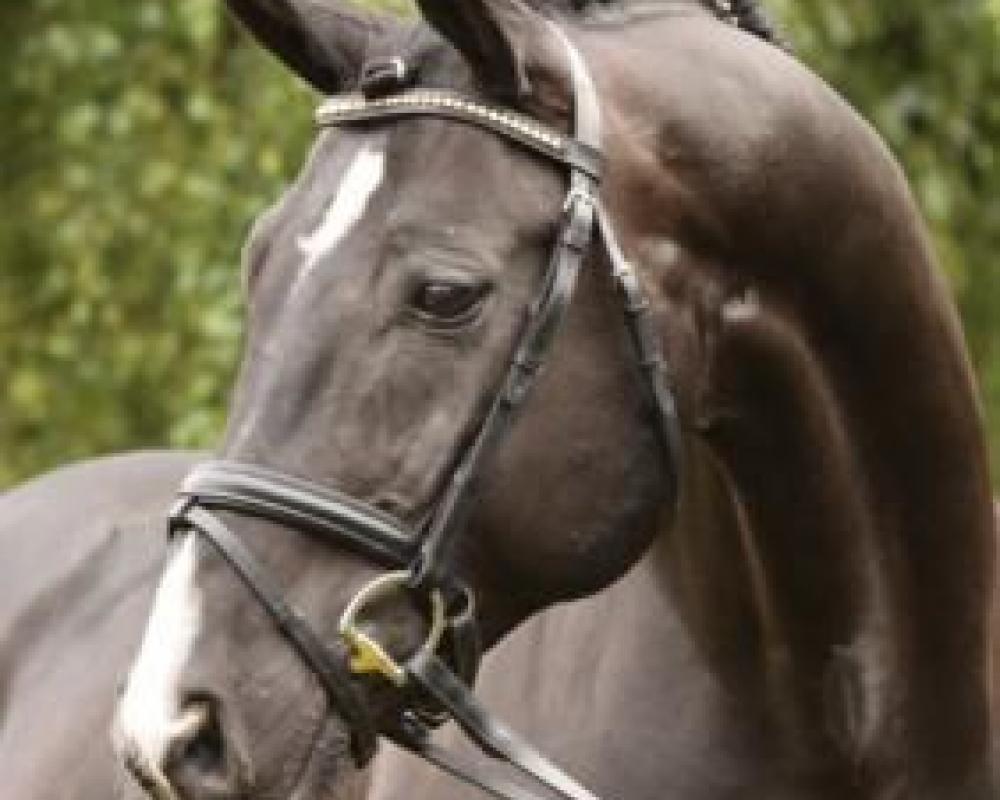 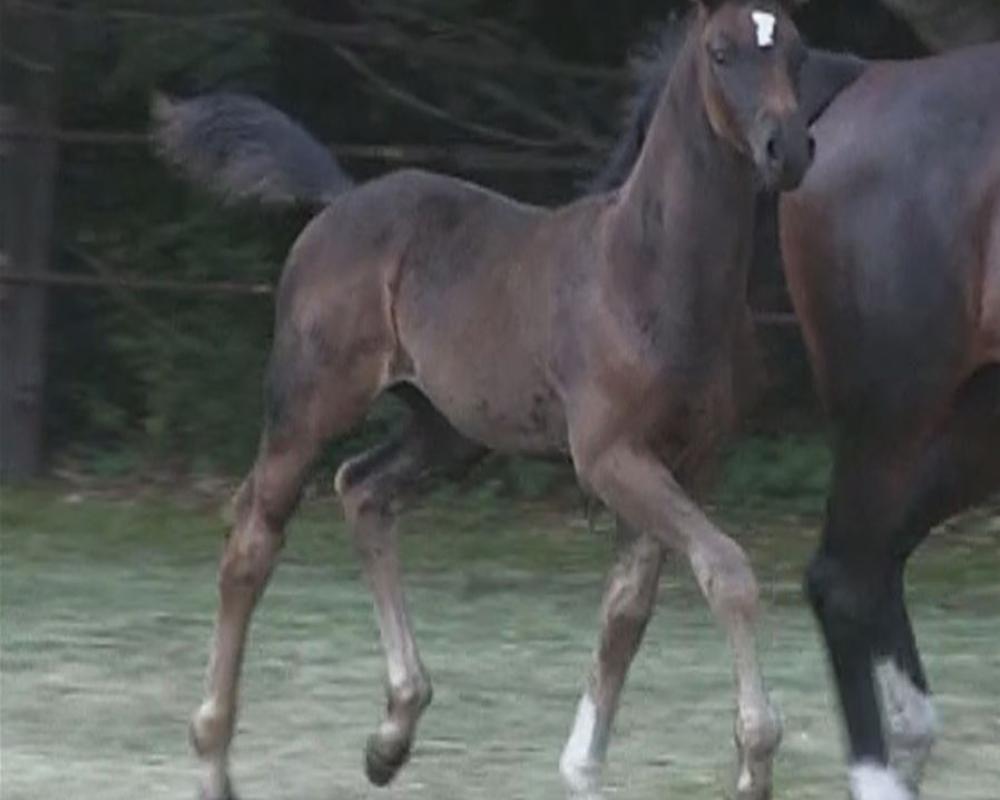 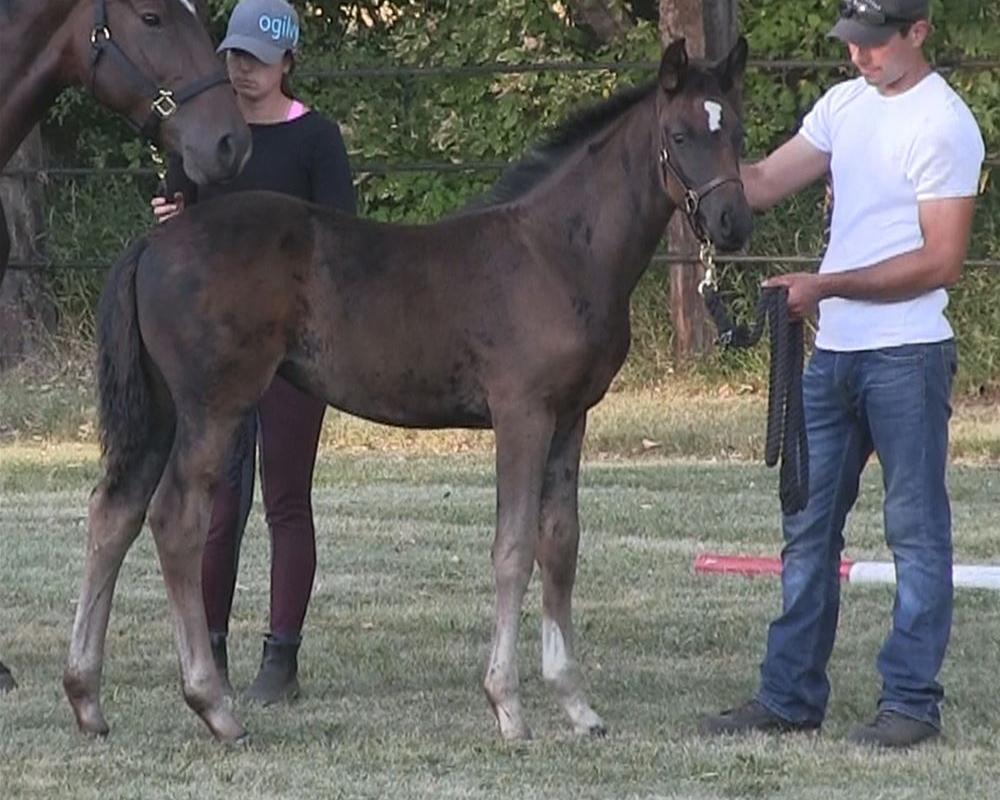 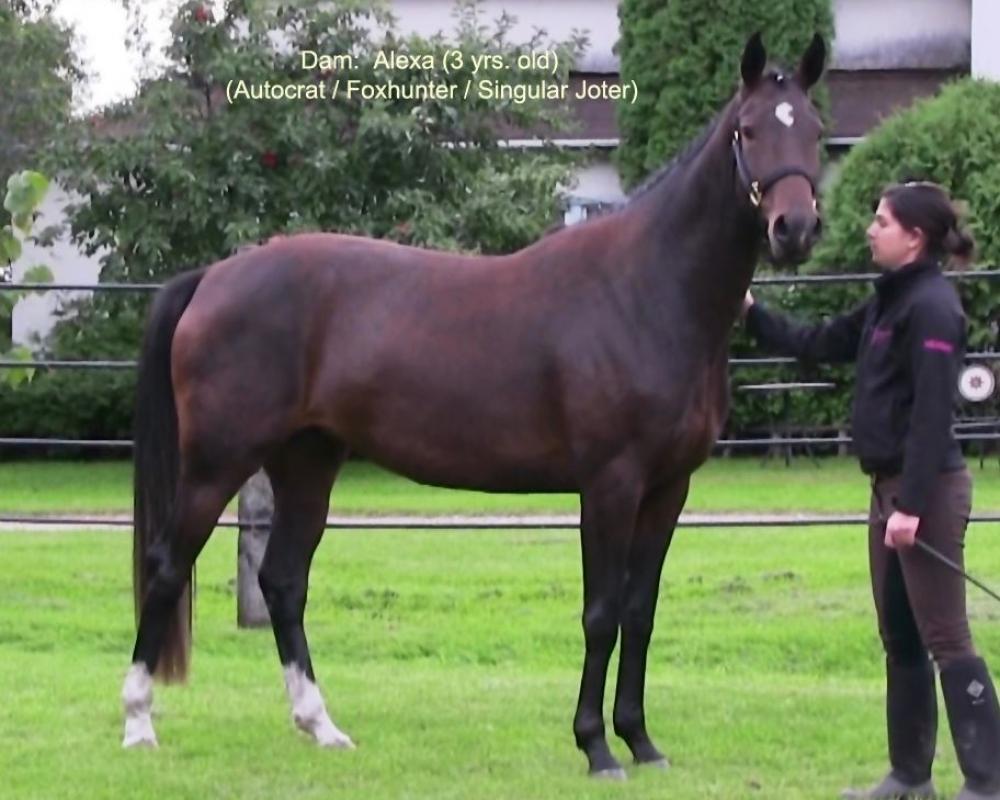 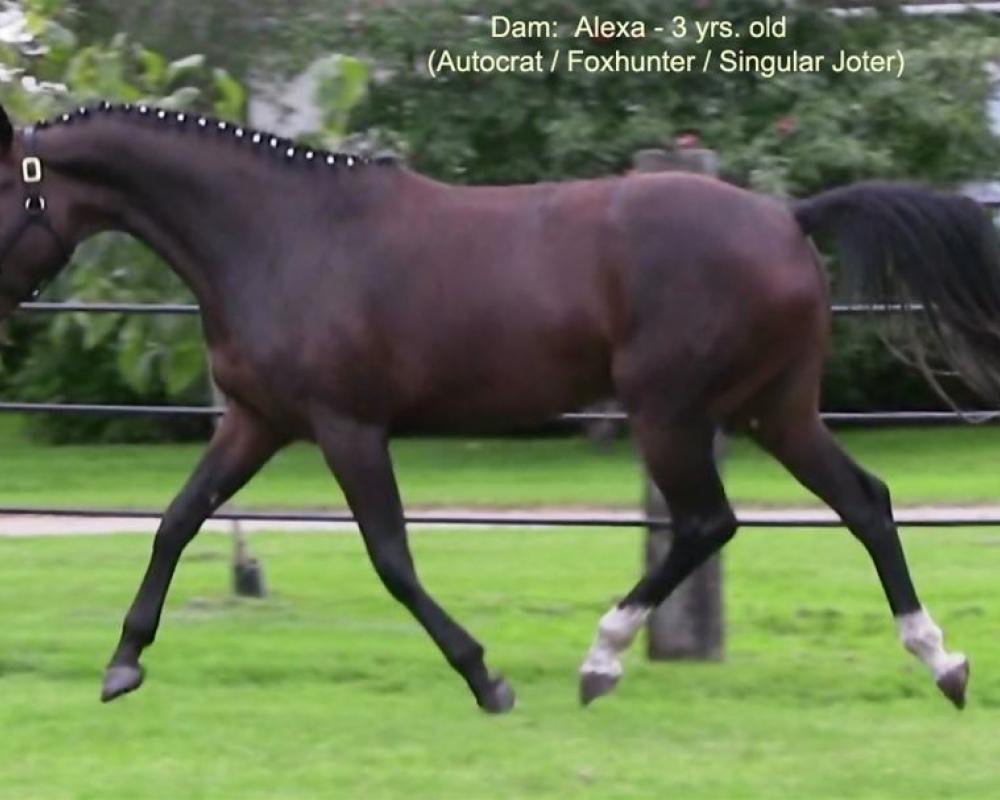 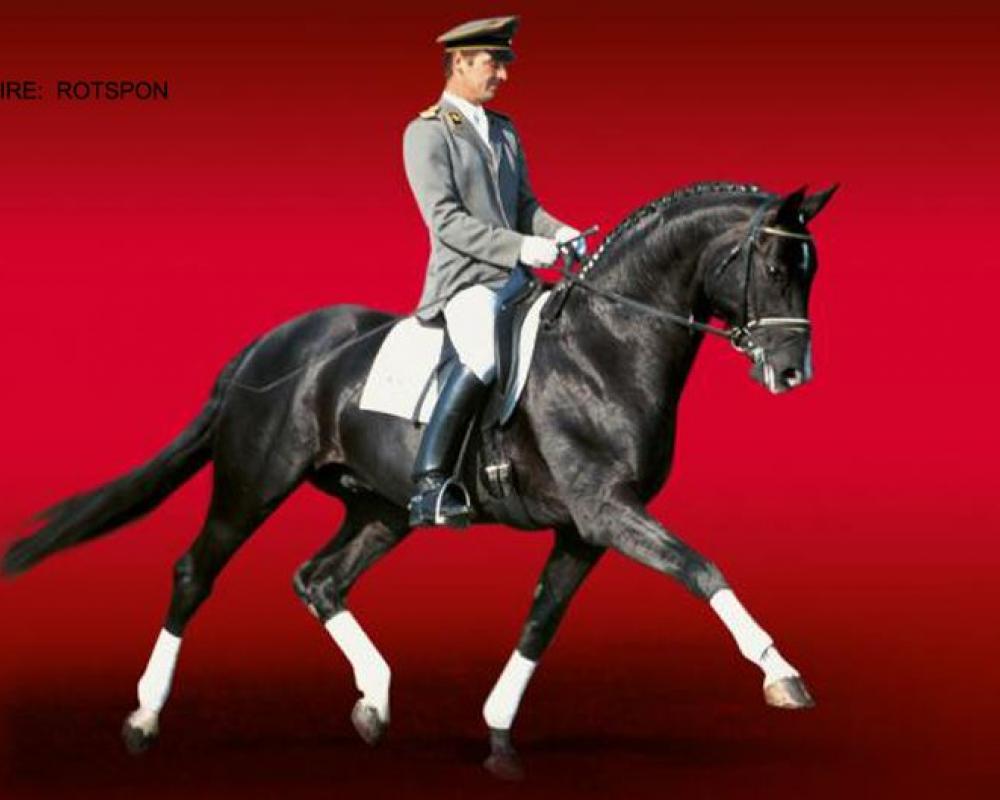 Rosalita (Rosa) is by the well known Hanoverian stallion, ROTSPON (Rubenstein x Argentan x Pik Bube) out of the lovely Hanoverian mare, Alexa (Autocrat/Foxhunter/Singular Joter). Rosa is a very sweet, easy going filly with lovely supple, elastic movement for dressage or the hunter ring. Registered with the German Oldenburg Verband, the inspectors thought highly of Rosa and she received a Premium award as well as an Elite Foal award. She is a dark brown medium sized filly and should mature around 16.1 hh. Bred for dressage, jumping, and rideability she should excel in either discipline.

Rosa’s sire, the Hanoverian stallion Rotspon (Rubinstein x Argentan x Pik Bube), has been the most successful Rubinstein son in the Hanoverian breeding district. Like his father, Rotspon is a very impressive horse with a great rideability, outstanding movement and a high ability for dressage. He also has a good jumping technique which is highly above average. His dam sire, Argentan, was famed as a ‘mare maker’, with the added bonus of Pik Bube I and Wendekreis. Rotspon was reserve champion of his licensing and the following year, easily won his performance test with a score of 145.67. He was a particular star for the test riders, giving them all such a pleasant ride.
Rotspon has consistently produced top selling auction horses at the Verden auction. In 2005, Rotspon received a Breeding Value Index of 155 points, with an assurance of 97% heritability from the German Equestrian Federation. As of 2014, he was the sire of 157 state premium mares so far, including Romanze, the champion mare of the 2002 Ratje-Niebuhr Show in Verden. Rotspon has produced 20 licensed stallions, including Re Primeur and Royal Blend, both of whom were awarded the Burchard Müller Prize as the best stallions of their respective age classes. Royal Blend was the premium stallion of the 2003 Hanoverian Licensing and was second at the Celle stallion performance test in October 2004. Rotspon’s son Rascalino was champion stallion of his Performance test in Adelheidsdorf in 2004. In the 2015 Hanoverian Stallion Book, Rotspon is credited with 888 competition progeny with winnings of €680,105 – 767 dressage place getters with 80 progeny competing at S level.

Rosa’s dam, Alexa, is out of the Elite Hanoverian mare, Faralyssa, who was Champion of her Hanoverian Performance Test at Spruce Meadows, Alberta, Canada and was awarded her Elite Mare status. She is by the Hanoverian stallion, Foxhunter, out of a Singular Joter mare. Foxhunter passes on his sound strength of character and good rideability along with his jumping talent. His offspring are very successful in show jumping. Faralyssa's dam sire, Singular Joter scored an incredible 156.11 in his jumping, placing him 1st of 72 stallions at his performance test in Adelheidsdorf, Germany. He is described as having "Textbook manner with tremendous ability" in jumping. He is a proven producer of offspring successful in show jumping, as well as talent for dressage, passing on his above average gaits. Alexa’s sire, the approved Hanoverian stallion Autocrat, was imported from the Celle State Stud, Germany. He sired the 2010 USDF Horse of the Year Materiale 4 or 5 yr old mare, 2 Toronto Royal Governor General's Cup Reserve Champions (2008 & 2010), 2010 Toronto Royal 5th place horse in the Lieutenant Governor's Cup, Elite Hanoverian Mares, Hunter Champions, Hack Champions & Provincial Dressage Champions.