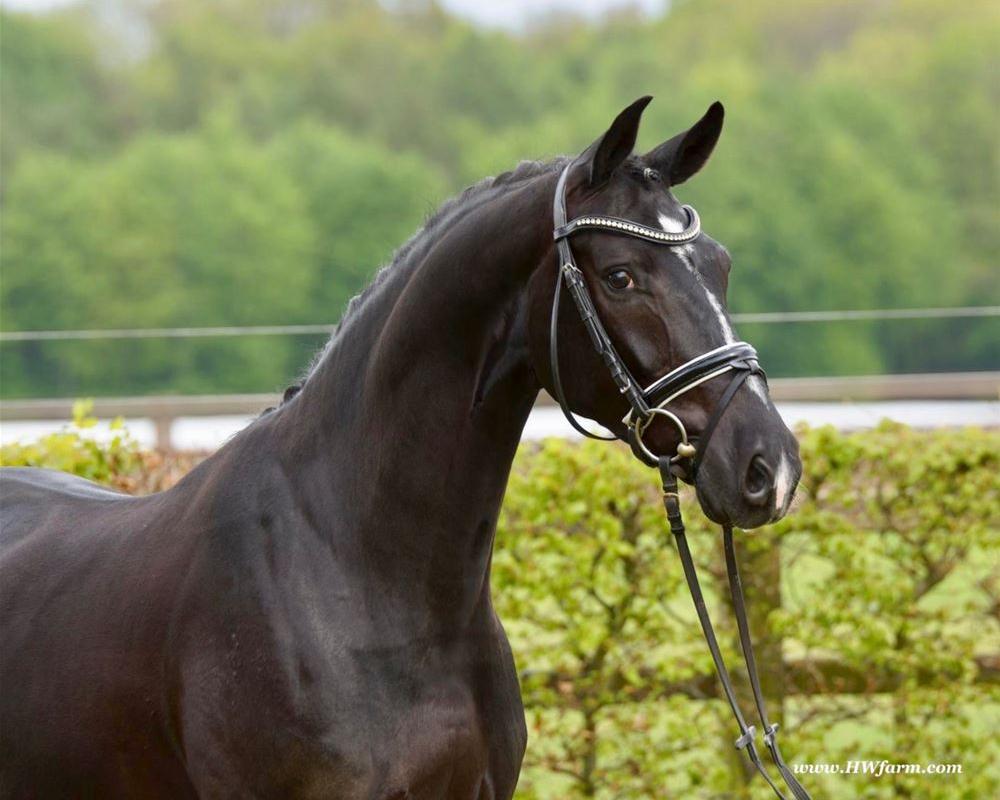 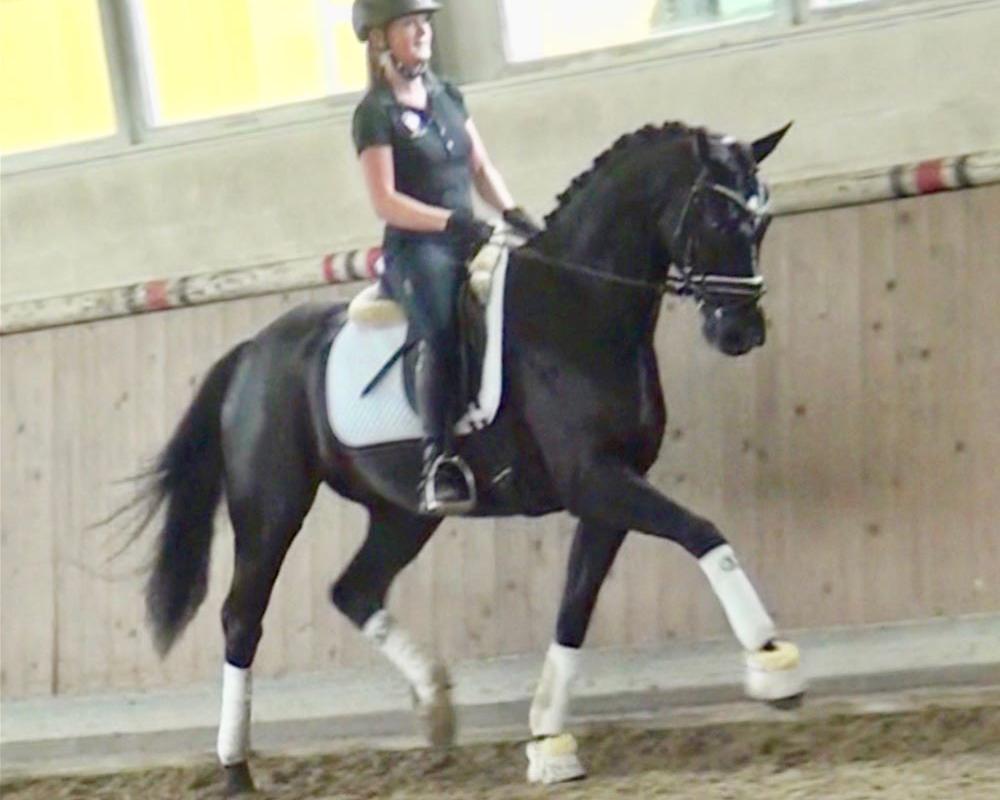 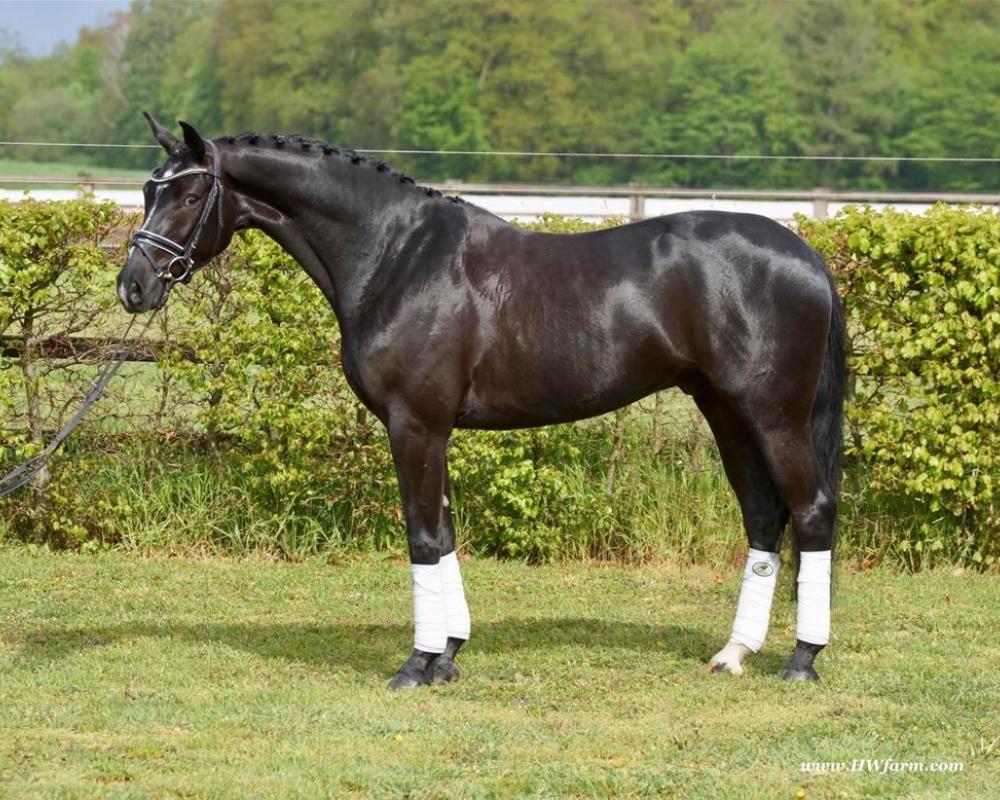 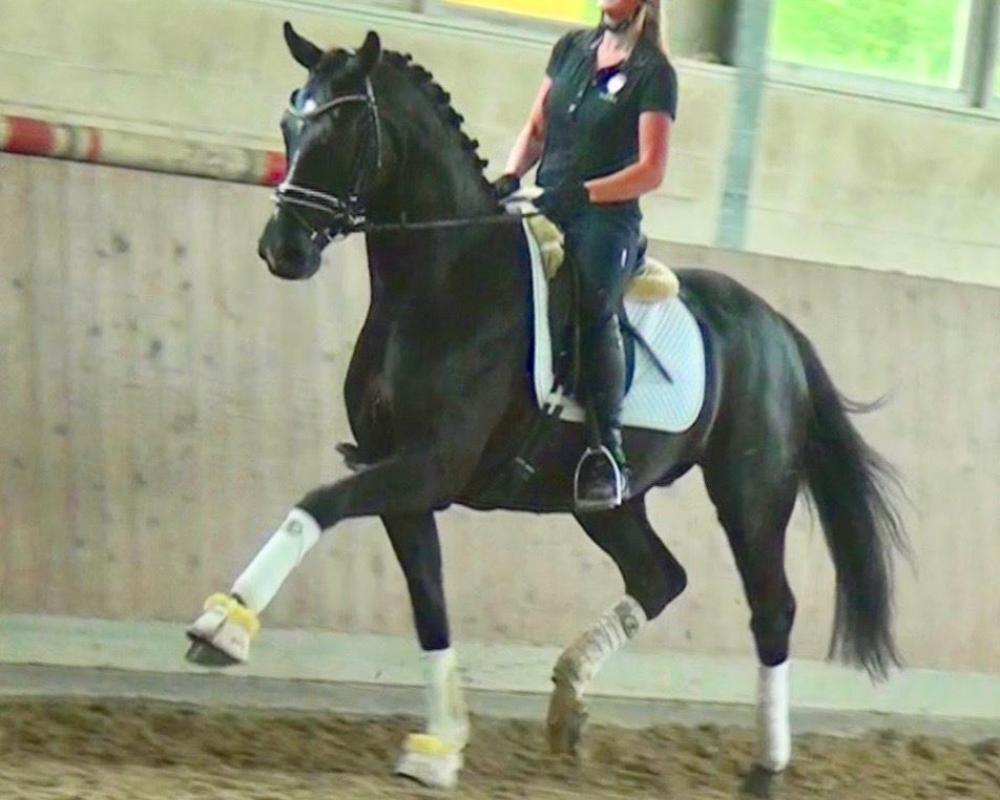 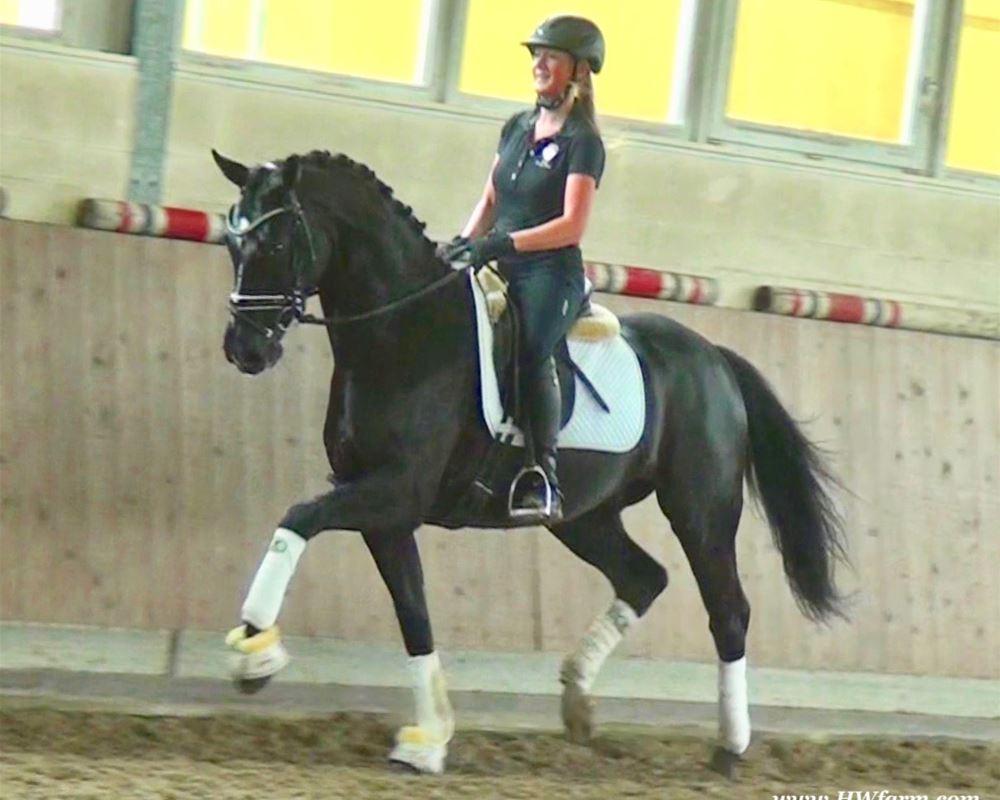 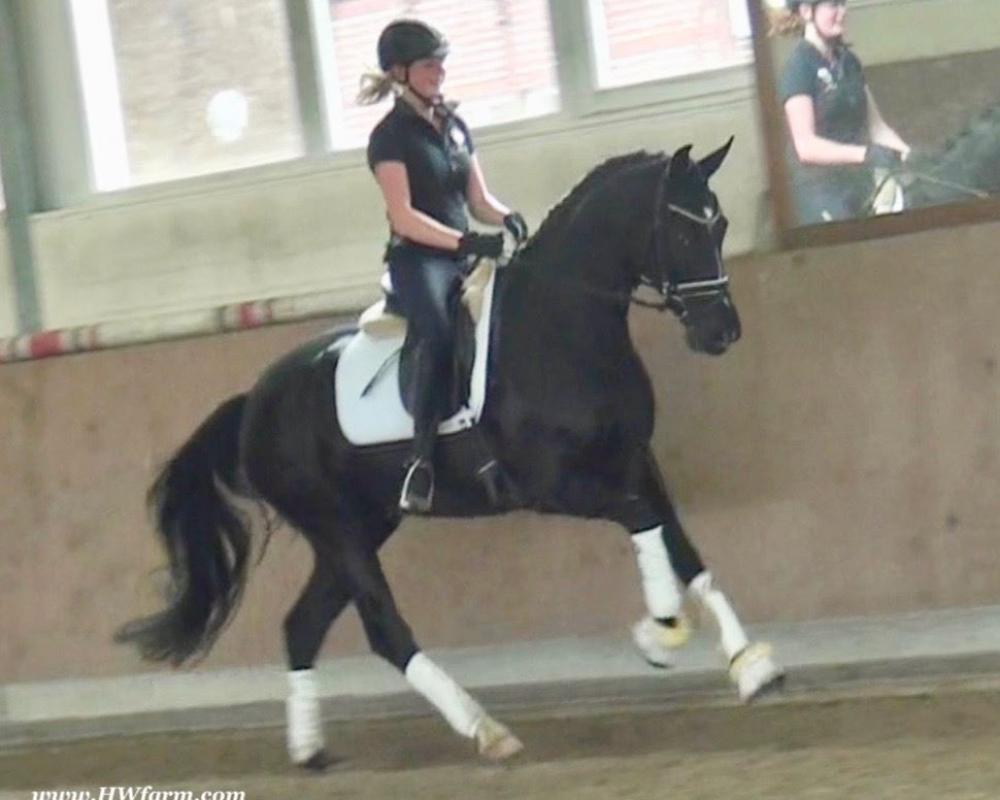 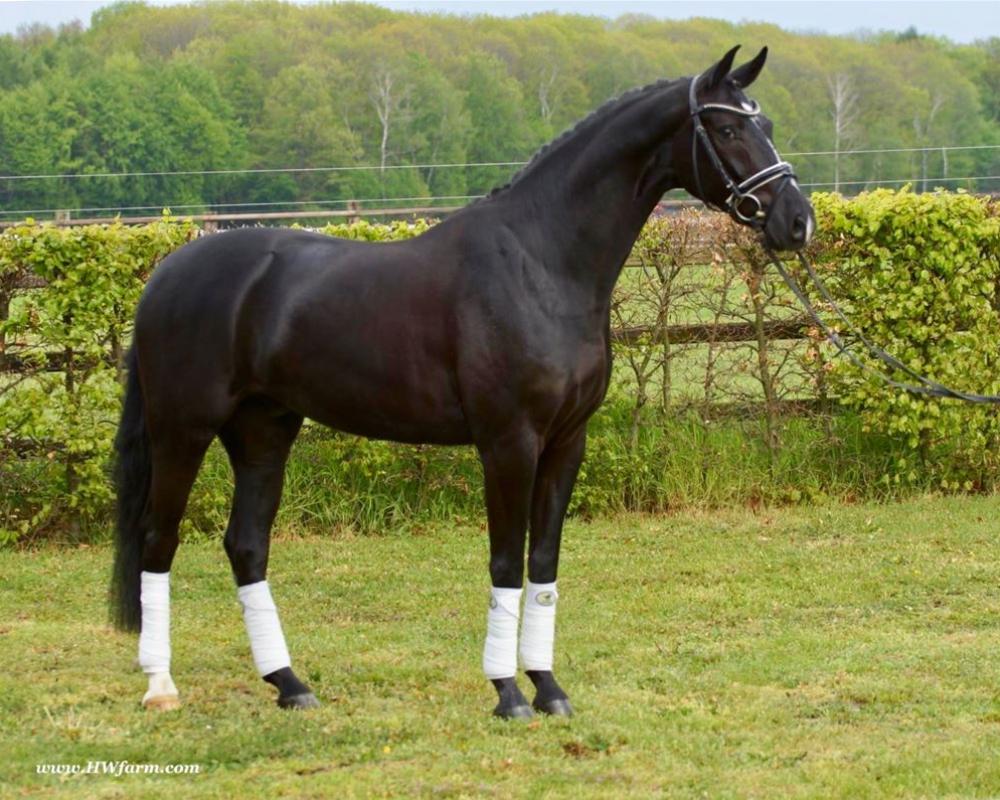 Satisfaction HW, by Sunday, sire of the popular and well known SenSation HW,
5 year old USDF Young Horse Champion of 2018 with Michael Bragdell in the saddle, plus many other victories, high points and champion titles.
The famous stallion Sunday. Best tested is the pairing of Sandro Hit by Donnerhall daughters. Likewise in SUNDAY, the 70-day trial Winner 2009 in Warendorf. Here he dominated the field with a final score of 132.38 points. In dressage he towered over the field with 138.71 points. He received top marks of 9.5 for his trot, rideability and temperament. Meanwhile SUNDAY wearing as a representative of the Westphalian horse breeding the abbreviation "NRW" in the name, arrived in the heavy class and
celebrated here last year numerous victories and placings up to Intermediaire I level. So far went his sports career to measure. After the Westphalia Champions runner-up in 2010, the successful completion followed at the Bundeschampionat in Warendorf.
In his first season he was able to shine with victories and super Placements in dressage tests. In 2011 and 2012 were successful years for SUNDAY NRW.
After double-qualification for the Federal Championships and the World Cup of the five year old dressage horses he pulled both times confidently on into the finals. When Bundeschampionat he ranked in the final account in sixth place. Again, participants in the World Championships for young dressage horses a year later, he placed ninth in the finals at the six-year olds. When Bundeschampionat he crowned the 2013 season with a podium finish. After second place in qualifying to SUNDAY NRW secured with Anja Wilimzig in the saddle with a harmonious and very good performance in the final bronze.Likewise, he could already six year celebrate in some starts in the Kl. M wins and placings. First progeny are successful in riding and dressage horses and were sold at a high price auctions. Moreover SUNDAY can boast four daughters were awarded state premium. His breeding value has been calculated on outstanding 150 the FN, which he is one of the best 1% of dressage in Germany. Father Sandro Hit, Federal Champion and World Champion of young dressage horses, Federal Champions and
licensing winner in series. The number of children in stud book now stands at 154,
the number of state premium mares at 223rd Mother Donatella produced the next to
SUNDAY, his full siblings Salieri 16 who is successful as well in the heavy class, the gelding Shall we dance 2, successful in the young horse tests, as well as Silia 5 and Sunday best, and the young horse Beautiful mind. Grand sire Donnerhall won with Karin Rehbein twice team gold at World Championships. He founded a stallion line. the combination of two exceptional fathers will be supplemented by the Hanoverian
stallion Pik Bube I. This is behind the mare Queen of Spades, which was herself placed in young horse classes and nine successful sports descendants brought that were
successful up to advanced level. Their joint lifetime earnings is more than 10,000 euros. The parent strain spring next to England in highly successful private stallion
Forrest Gump more on the course and on the square successful sport horses.

Satisfaction HW’s dam sire is by Schumacher. He managed to convince as a premium
stallion during the stallion show in Munster with his beautiful type, correct foundation and his striking, high-profile appearance. Three first class gaits, combined with
an active use of the hindleg must ensure a high riding comfort, something that was amply proven in his first competition season.
Schumacher won several Reitpferdeprüfungen with scores higher than 9.
In Münster-Handorf, Schumacher was named Westphalian champion
with the three-year-old riding horse stallions and was allowed to represent his
association during the Bundeschampionat.

The stallion came in reserve champion under Claudia Rüscher.
At the end of the season, the stallion made himself heard again by running a fantastic 30-day test in which especially his strong trot and canter stood out.
Sire Stedinger is the unsurpassed inspection champion of the Olderburger stallion days 2002, first reserve champion of the Hauptprämie 2004 and subsequently qualified for the Bundeschampionat for German dressage horses in Warendorf.
In the first two years, 9 sons have already been judged, including premium champions and 2 state premium mares.
The dam's line makes this stallion even more valuable. Schumacher's mother Wildrose produced several high-performance sport horses, including Delgado (by De Niro) who participated in the Bundeschampionat and is currently in possession of the Olympic rider Beatriz Ferres-Salat.
Dam's sire Weltmeyer is a household name in breeding. The stallion was inspection Champion in Hanover, won his performance test and, in addition,
also became champion at the Bundeschampionat.
With more than 50 licensed sons, Weltmeyer has more than proven himself in breeding and, partly as a result, was named Hanoverian Stallion of the Year in 1998.

Satisfaction HW himself, is a breathtaking horse of definite Champion quality, equipped with absolutely phenomenal gaits, presenting himself with wonderful
self-carriage. 100% rideability and a super character
His stallion type (he is a gelding!!) will mesmerize everybody alike.
He is a horse who casts his spell on every single person, a super fancy mover who knows to impress due to his type and work ethic. He is supple and has a ton of air time. He just floats above the ground, with his free shoulder and huge grundschwung, he swings nicely through his back,
is light in the bridle and easy to sit.
This extremely talented gentleman has definite international potential.

A stunning horse whom has all the looks and personality a person could ever hope for. He has a super nice, chiseled head, big stallion neck (he's a gelding!),
if he blinks with his beautiful kind eye, you'll fall in love at first sight.
Satisfaction HW has cat like movement and is as elastic as they get.
His hooves barley touch the ground. He loves to please his handler and rider, to learn new things is his hobby as well as eagerly working under saddle.
He does an amazing job in the dressage arena and with his quick,
far reaching hind leg, passage and piaffe will come naturally to him.

He is a very sweet boy, easy to handle and loves his personal grooming time and puts his head right in your lap, striving for attention and searching for treats.
Uncomplicated on the ground and under saddle, easy to ride and an amateur,
YR or professional will enjoy him just the same.
Outstanding personality, gaits, looks and temperament.
He will be the star in FEI classes and at clinics,
the judges and onlookers will remember him where ever he goes.
Satisfaction HW is used to go in the hot walker, loves his shower and solarium time.

Stands for the farrier, loads and appreciates grooming time.
Satisfaction HW has the attitude of a real gentleman.
This young stunner will go far in the dressage ring, he is your ticket to the top!

Please find all and other hand selected, top quality horses for sale at www.HWfarm.com

Terms
Please find all and other hand selected, top quality horses for sale at www.HWfarm.com