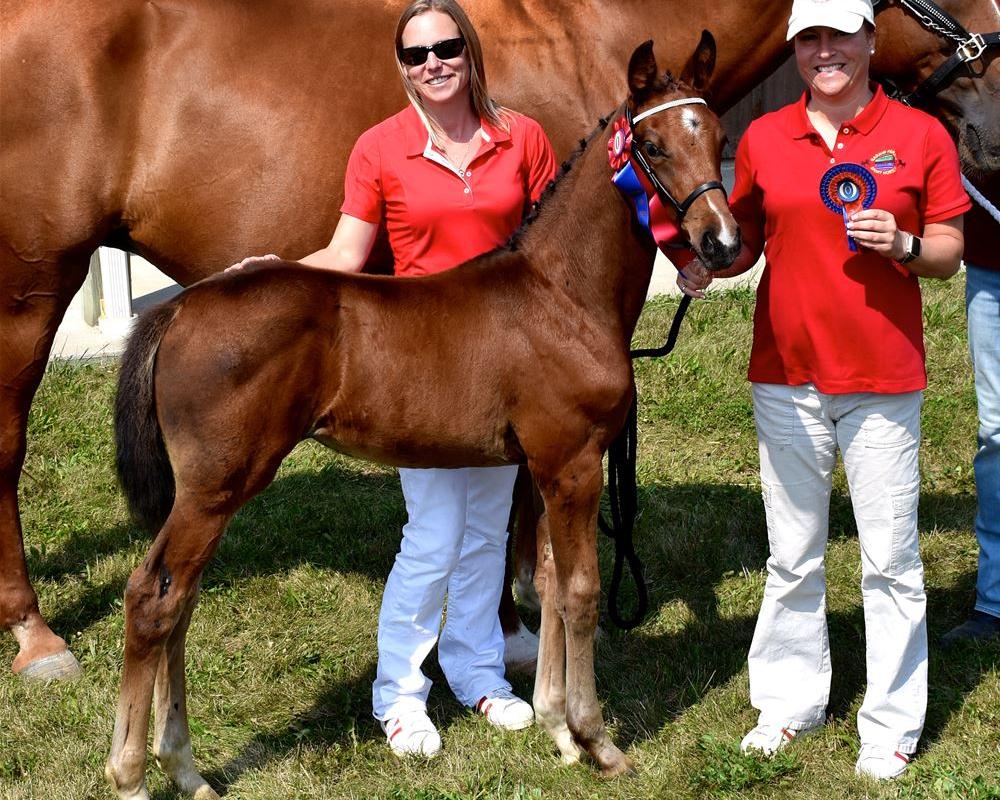 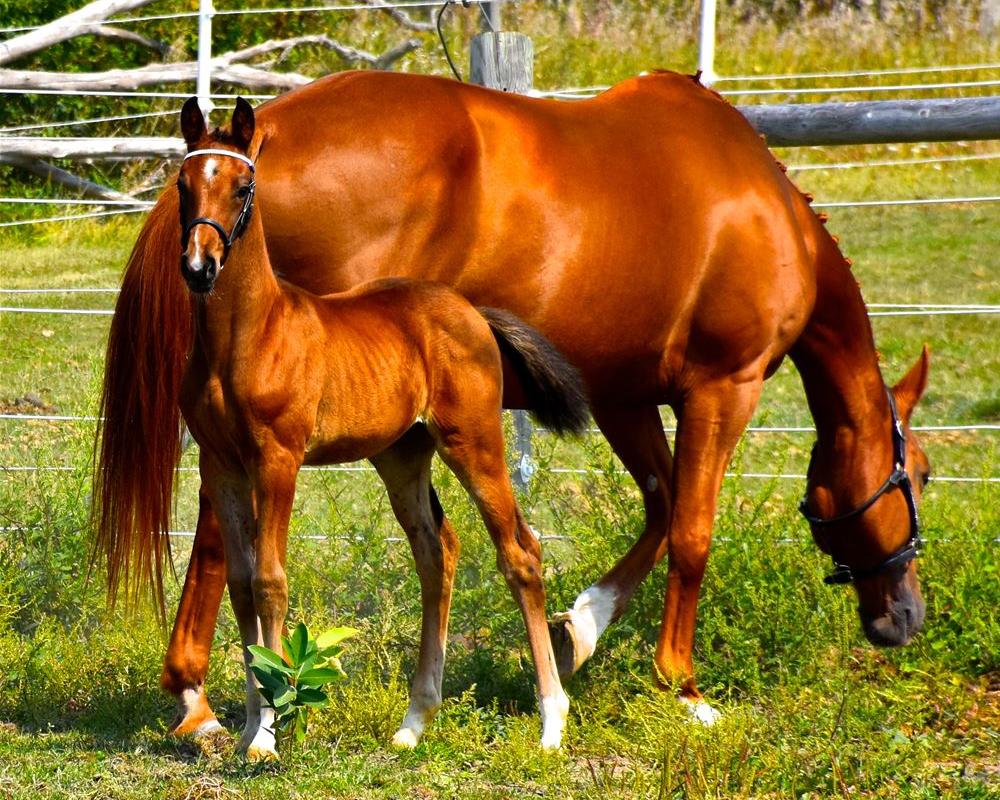 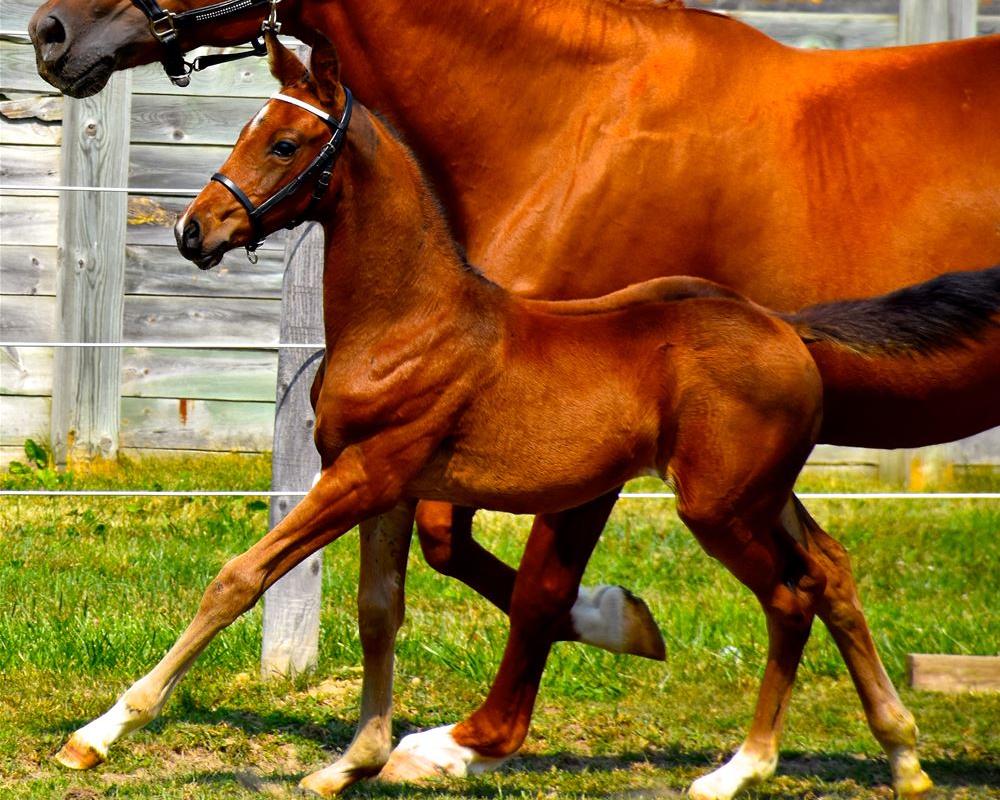 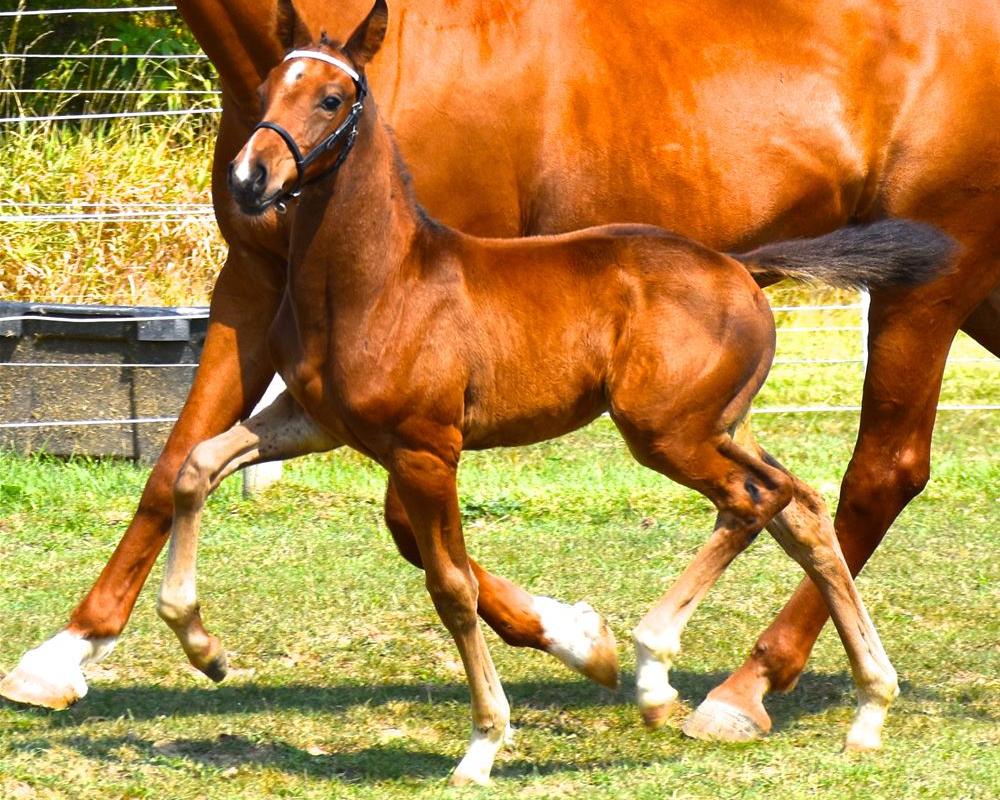 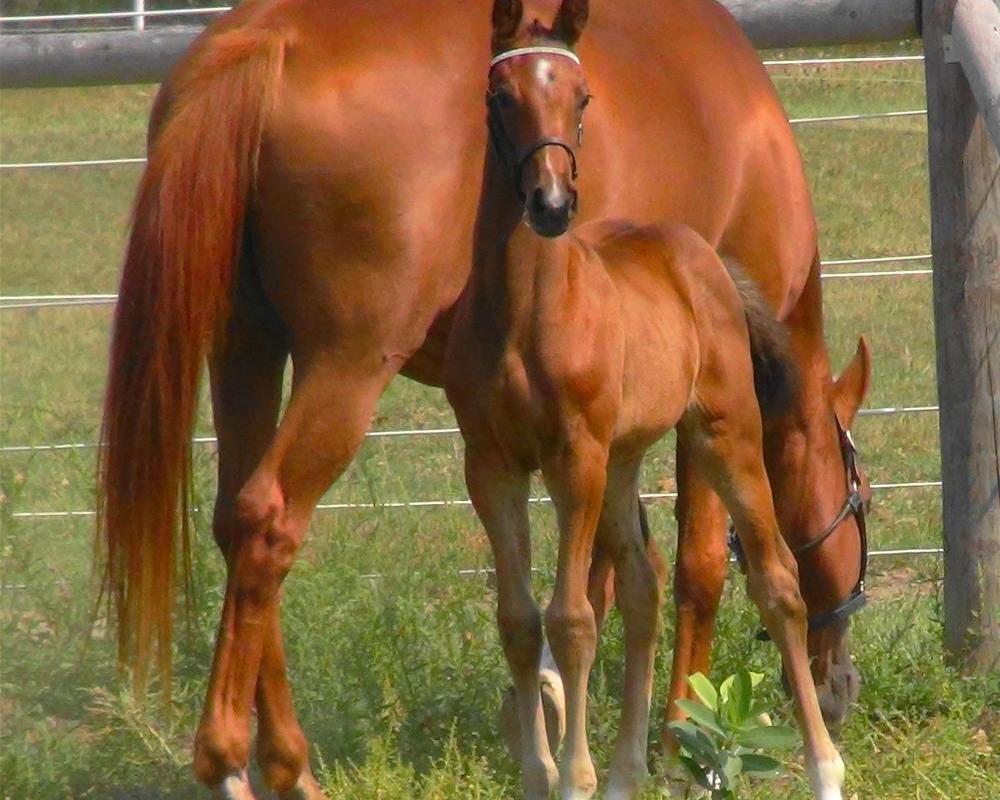 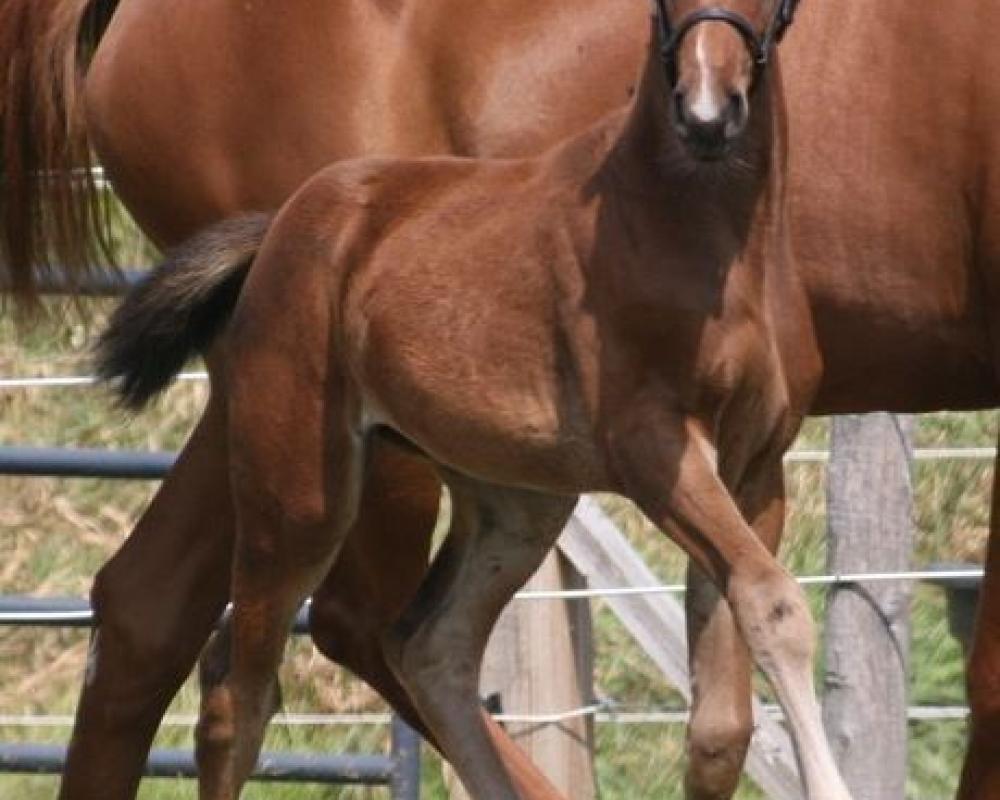 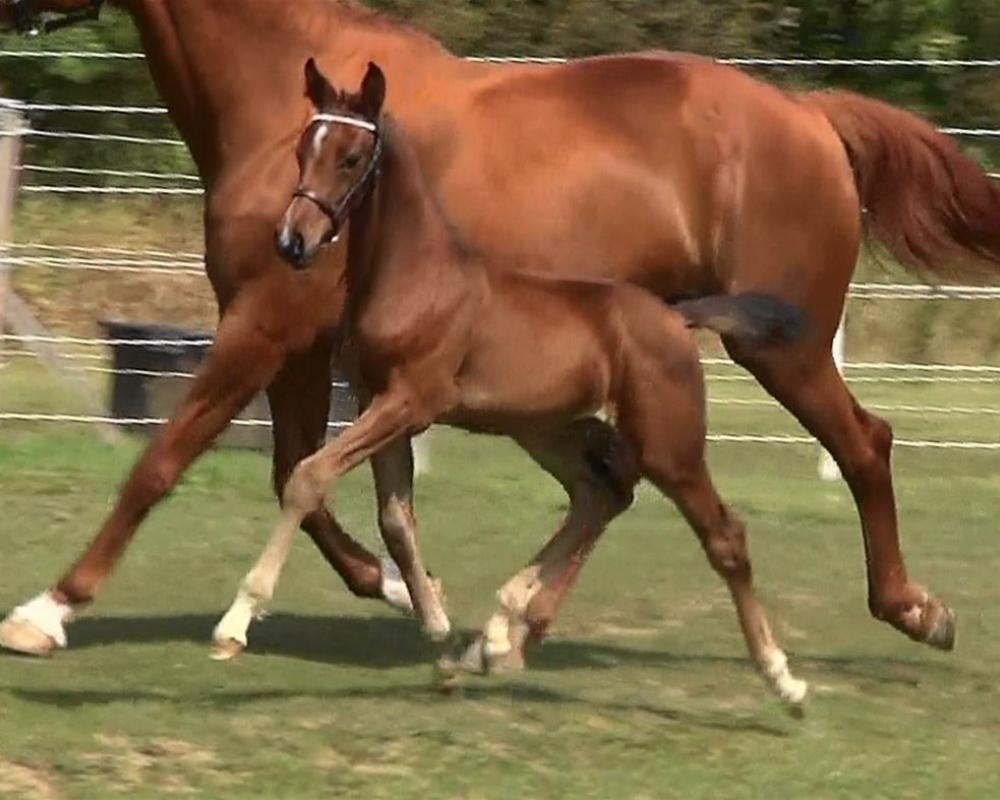 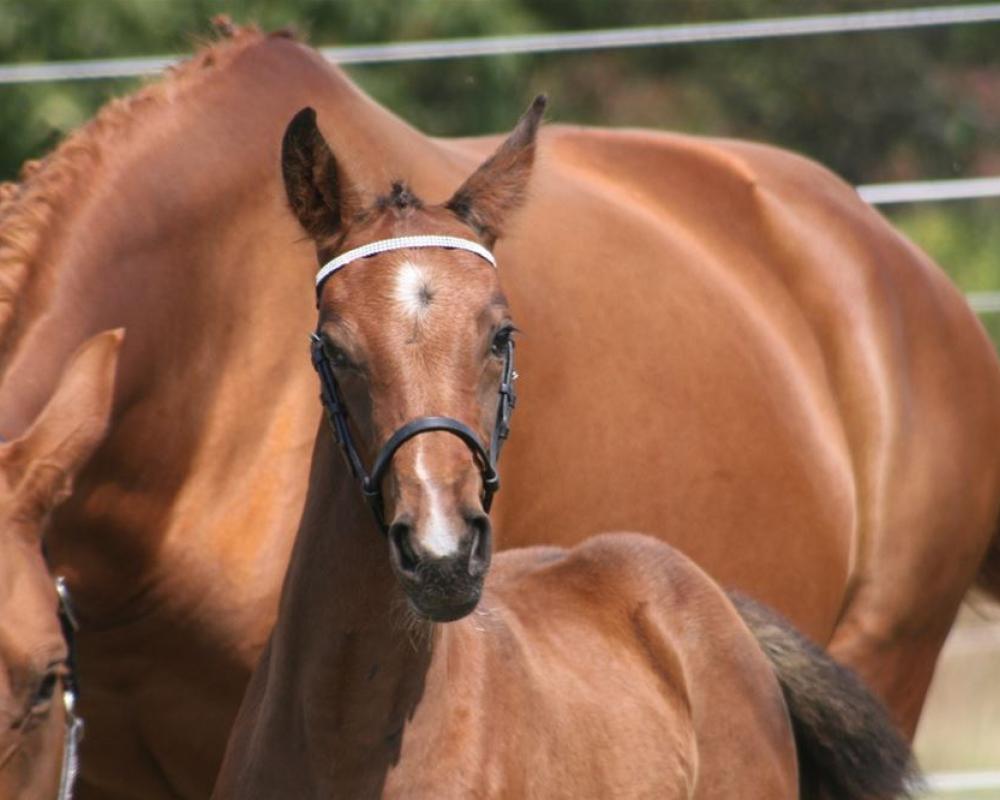 SOLD!!! - Premium, Champion and Foal of Distinction at 6 weeks of age!!! Schwarovski MKF by Schwarzenegger (Sion/Calypso II) out of Cameo Role (COntucci/Duellegalnz)

The dam, Cameo Role, born in 2002, is a beautiful 16.2 hand Premium and Champion Oldenburg mare.. She carries the bloodlines of the magnificent stallion, Contucci, who is her sire. Her Granddam and Grandsire, are Wishful and Duellglanz respectively, who were both Foundation breeding stock for the now well known breeding facility, High Point Hanoverians. Therefore, as important as her sire line, is her strong dam line, which is a treasure to have in a broodmare.

Cameo Role has produced 5 Premium Foals. Cameo, herself, was Premium as a foal and scored an amazing 8.7 for movement with an 8.5 overall!!! She showed in hand as a 5 year old at Dressage at Waterloo and was USDF Grand Champion of the Entire DHSB Show with Lilo Fore as judge. She was awarded an impressive score of 82.8.

Cameo has powerfully successful and proven bloodlines. What is exciting about Cameo, is not only her strong sire line, but also her very impressive dam line!!! She is the complete package.

The sire, Schwarzenegger (Sion/Calypso II) is total fuell for a foal in 2017. Schwarzenegger is a top-class breeding stallion with a perfect character. Schwarzenegger was born in Verden, Germany in 1997 from the Windeler breeding program. He is black/brown in color with four white socks and a small star. With a height of 17 hh (1.72 m), and a natural uphill build, he carries himself with a dignified presence. In his stallion performance test in Redefin, he scored an impressive 125.24 points. This score placed him 3rd overall out of 22 stallions. His integrated breeding value estimation is 122 for Dressage and 114 for jumping. His temperament and character impressed the judges with a score of 9 and 10 respectively. In his offspring he tends to improve the canter with a 120 as well as the the jumping manner and scope with a 128. He also throws his wonderful mind and kind expression making very rideable offspring. He has offspring competing in both advanced dressage and advanced jumping classes. His offspring are known for their super basic gaits, fantastic trainability/rideability, and the tendency to show talent for both dressage and jumping. As a foal, Schwarzenegger was the vice-champion at the Lower Saxon Foal Championships. He has brilliant basic gaits and an outstanding rideability. He has placed at advanced level dressage competitions. In 2007, he was victorious at various advanced level dressage tests. He has competed successfully at Intermedaire I in Germany.

We are proven producers of Champions.
For more information, check out www.markimfarms.com Located in Michigan.

MarKim Farms is a breeder of modern World Class Champion Oldenburg Sport Horses. We are very selective in our breeding program. Our commitment is to improve the breed both in temperament and athletic ability . . . and we do it selectively . . . one at a time.
Email Seller Now
Visit Seller Website
More Horses From Seller
Get the latest news and updates