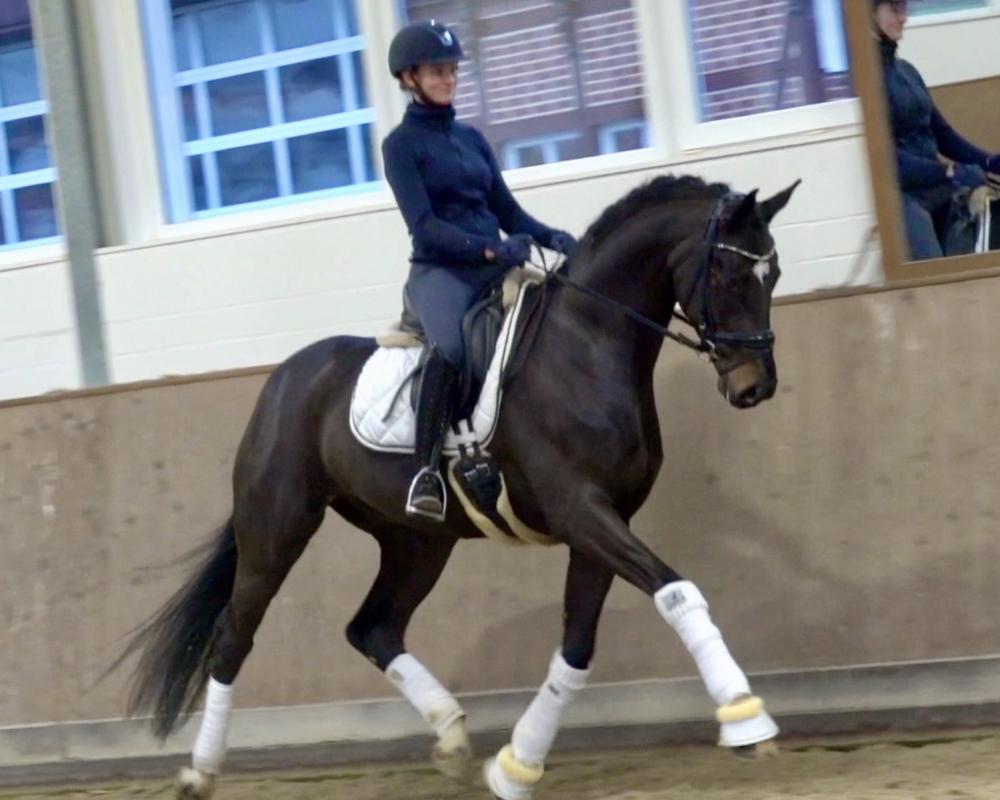 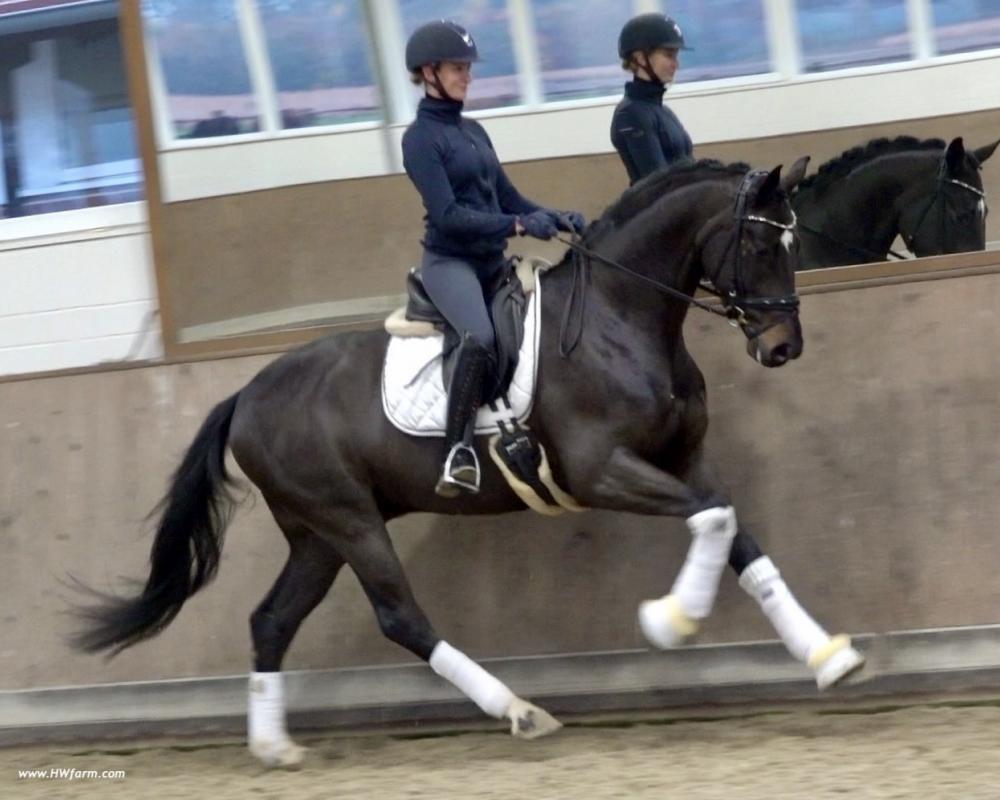 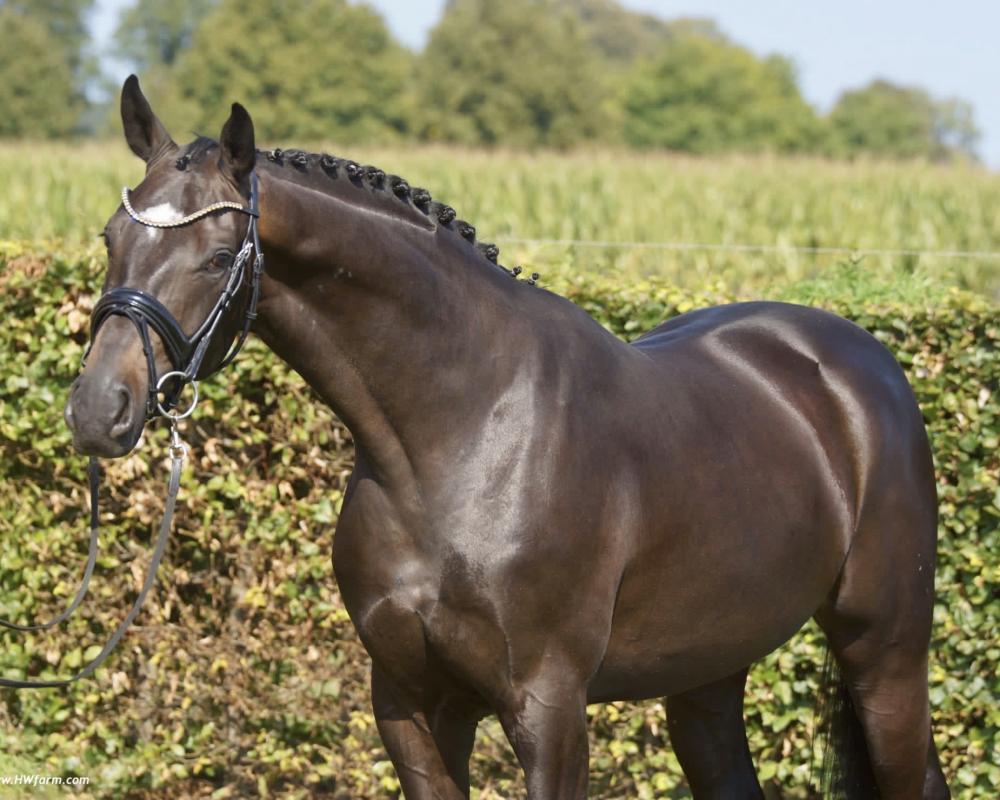 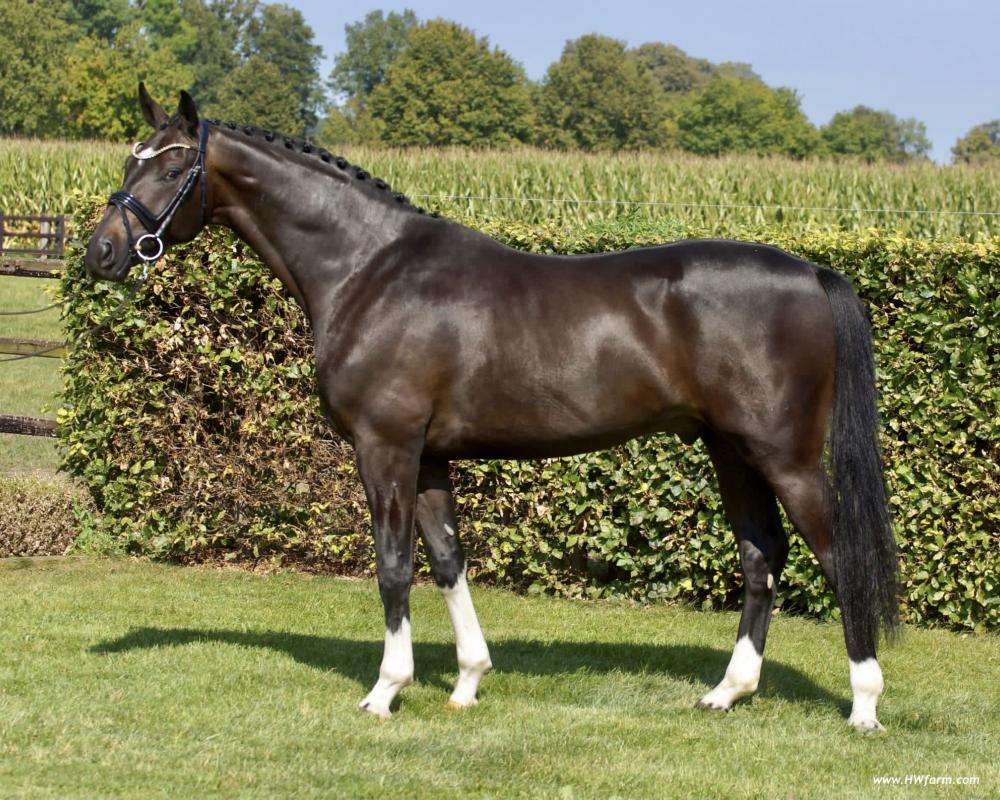 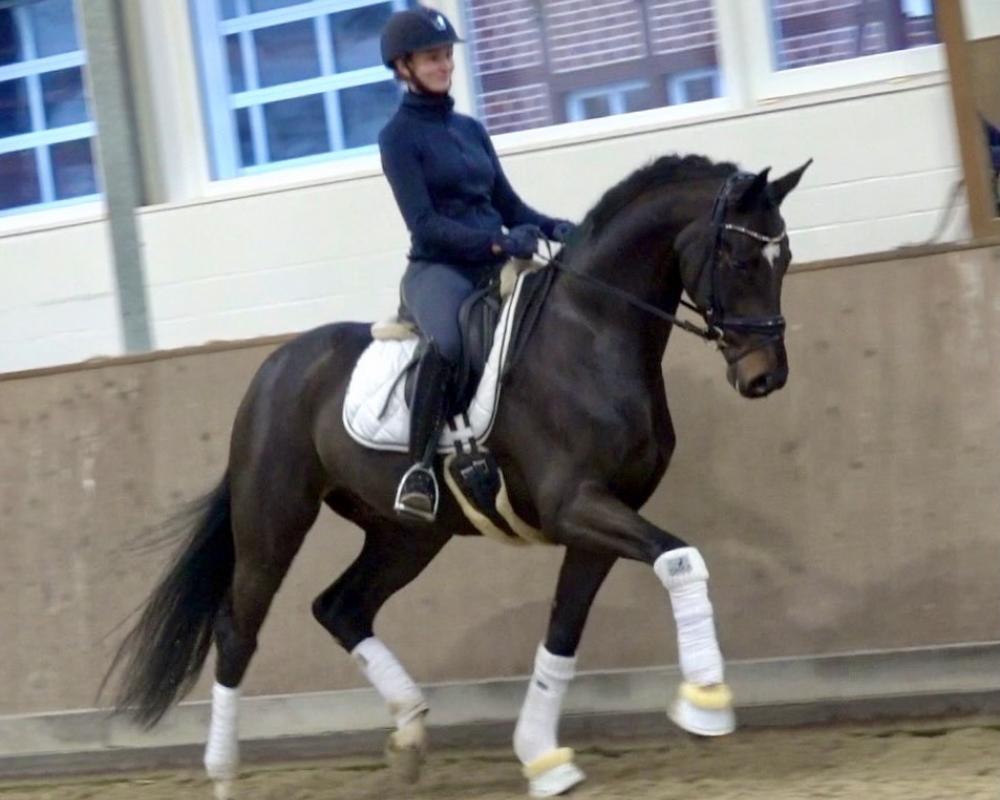 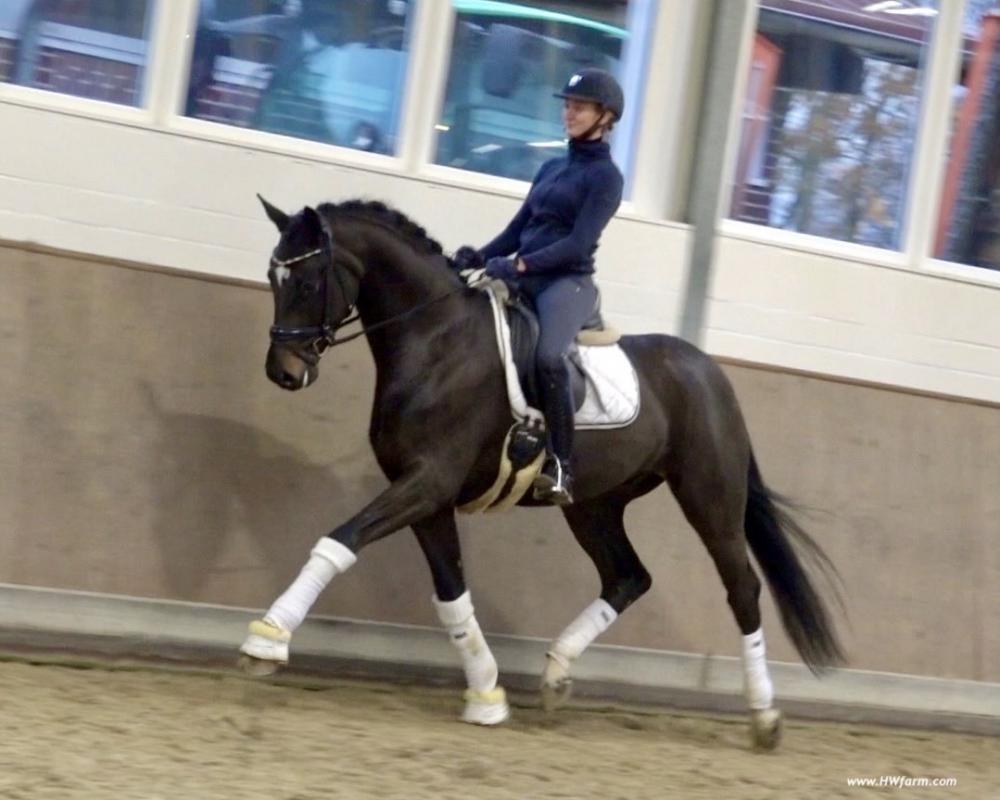 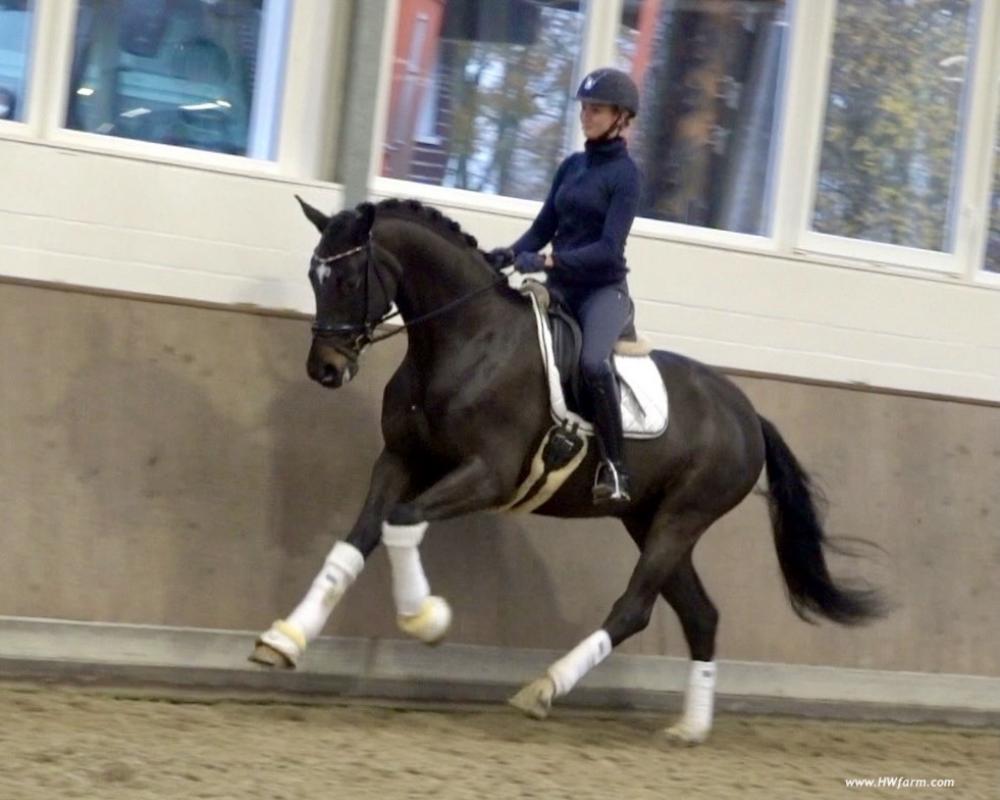 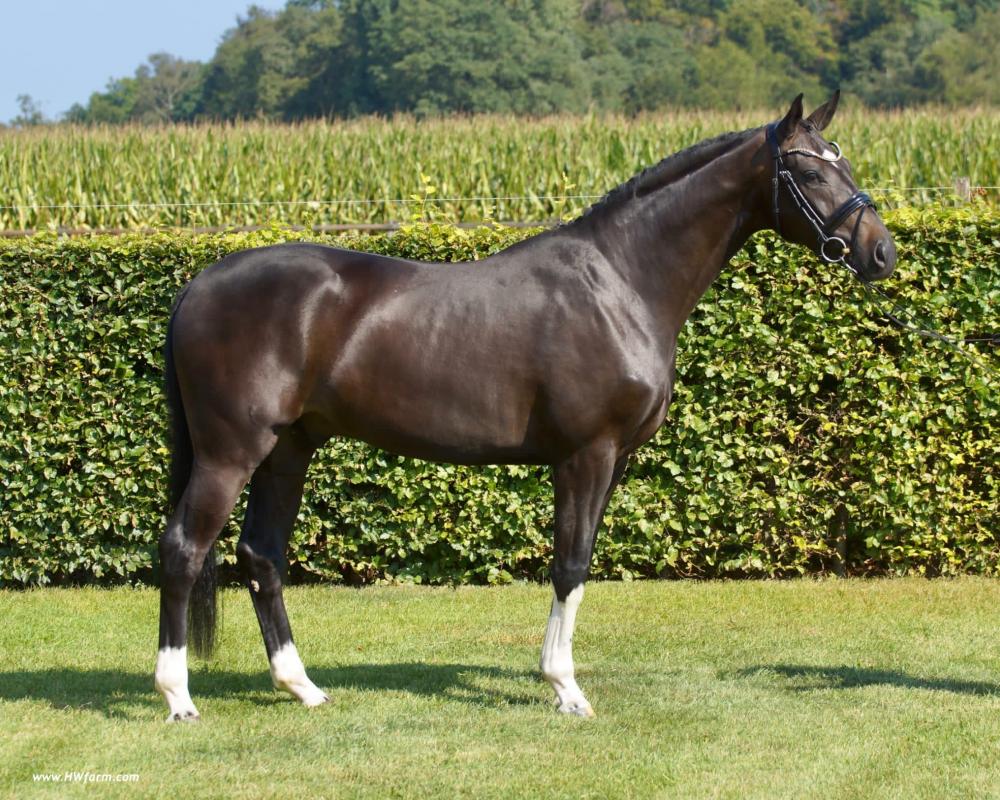 Stunning, just mesmerizing all around, a definite FEI prospect.

Secret Affair HW is by the absolut top stallion Secret. The secret "Secret" has been revealed ... this posh youngster was undoubtedly a very special addition to the station. Due to his outstanding type brilliance as well as his exceptional potential for movement, this son of the triple world champion Sezuan is an absolute exception. Three basic gaits in equal measure of high rarity value - step, trot and gallop of the highest quality. This stallion grew up very gently and causes open mouths from the first moment. Hard to beat rideability values complete this impressive model.
The very first appearance under the saddle caused a veritable hype far beyond the country's borders. Large advance laurels, which was to be confirmed. But even these high expectations fulfilled Secret effortlessly, as he finished with a dressage end note of 9.5 in Schlieckau. He was able to shine again at the Bundeschampionat in Warendorf, where he was "only" voted Vice Bundeschampion due to the foreign rider scores. A thoroughly controversial decision, because of all the rideability values (Fremdreiternote & Richter) from Schlieckau, there with the grade 4 times the 10.0 rated, could not have been better.

Father Sezuan is a celebrated triple world champion of young dressage horses and undoubtedly belongs to the most sought-after dressage horses of the present under Dorothee Schneider. Not to mention the upcoming future in the big square. Both his breeding and his sporting career is marked by highlights. Also in the course of his licensing and in the performances during the World Championships, only scores between 9.5 and 10.0 were awarded for his basic gaits. Thus, he was the title of world champion of young dressage horses 5, 6 and 7 years old undisputed sure. A recipe for success that is second to none - the Secret line's dam line, strain 853 of Sudette, produced numerous internationally recognized performance horses. In addition to this sire, there are already 38 more licensed stallions from this dam line. As a motherfather, we find St. Moritz, who in his unfortunately too short effect on the Gestüt W.M. brought forth a whole series of interesting, sporty, and successful offspring.

The maternal pedigree is rounded off by the tried-and-tested combination of successes of the Celler studs Rotspon, Argentan, Woermann and Lugano. The figurehead of this dam line is the latest addition to the Bundeschampion of five-year-old dressage horses and the reigning world champion of six-year-old dressage horses Lordwood's Dancing Diamond under Anne-Kathrin Pohlmeier. Due to the genetic blood combination of the extra class in this flagship pedigree paired with the high performance of this rough diamond we offer the experienced dressage horse breeder of today thus a very special offer.

Enjoy the videos of this work of art!
With the highest dressage final score of 9.5, Secret successfully completed his 14-day test.
– Secret received in Schlieckau ; gallop 10.0, trot 9.5 and was rated in rideability by both the judges and the foreign rider with the highest score of 10.00.
– Bundeschampionate Warendorf 2017 | BC FINAL QUALIFICATION 3yo Stallions
– National Vice Champion 3yo Stallion
– Won the 3yo Stallion qualifying class at the 2017 Bundeschampionate, Scoring 8.5 for trot; 9.5 for canter; 9.5 for walk; 9.0 for rideability and 8.5 for conformation with a total score of 9.0
Secret Affair HW’s dam sire is the world famous Sir Donnerhall.

Sire of World Champions, Winners of the Bundeschampionship,

Hero and producer of champions of historic uniqueness. If one wanted to put together all the heredity highlights for Sir Donnerhall I, one would need to write a whole book. For years, he has dominated the Bundeschampionship as no sire has done before him: in 2014 the daughter Special Diva OLD won the Bundeschampionship of three year old mares and geldings, prior to that she became Oldenburger Vice-Landeschampionesse. The licensed son Sir Heinrich dominated the scene of the five year old dressage horses. In 2012 and 2013, his son Sa Coeur was World Champion of the young dressage horses in Verden and top horse at the PSI auction in Ankum. Sir Donnerhall´s progeny are always sought after. For years Sir Donnerhall I was one of the most successful sires of auction horses and continuous producer of top horses achieving 6 digit prices. His progeny impress again and again with their great style, a modern type and subtle movements. The FN breeding value association ranks Sir Donnerhall I, who has himself been trained up to Grand Prix, as one of the best sires of dressage horses. He was second reserve champion at his licensing, stallion performance test winner, Ia main premium sire in 2005 and in 2006 Bundeschampion as well as vice World Champion of five year old dressage horses. He quickly turned out to be a foundation stallion: he has sired 89 licensed sons so far, among them the NRW champion stallion and vice Bundeschampion Silbermond, the champion stallions of the South German licensing Sir Nymphenburg I and Sir Schiwago as well as numerous premium sires at all German licensing locations. The premium sire Santo Dottore was Reitpferde Champion of the three year old Oldenburg stallions in 2014. More than 80 daughters were awarded the predicate ´state premium`. The daughter Assandra was honoured as best three year old mare in Austria in 2011.

Sir Donnerhall: one of the surest bets among German dressage horse producers

Secret Affair HW, one of a kind. What a beautiful head, neck, true stallion looks, even as he is a gelding and gentleman.
Combined with a super dark coat, he is a standout everywhere.
Check out his freedom in the shoulder and active hind legs!

He has a superb rhythm and swings softly through his back. His gaits are just breathtaking and totally mesmerizing, even at his young age.
The canter comes with a phenomenal uphill movement, with lots of air time, jumping well up and out and under every single time.
He is so much fun to watch and ride.

The trot is supple and as elastic as it gets, his front legs reach far out and up, totally amazing. His active hind end enables him to look effortless and his hind legs are reaching far under his body.

He will be a piaffe and passage machine, that's very obvious already.
The walk is pure and rhythmic. Secret Affair HW loves collected work,
he goes easily through the neck, on the bit, feather light for the riders hand. He has the perfect self carriage, just stunning and a horse of a lifetime.

Secret Affair HW is working at First Level, giving his best every single day. He was born at the barn, the perfect upbringing in small stallion herds, perfect socialization, regular farrier work and multiple times a day, human contact and interaction, he loves to be in your pocket, sweet as a puppy dog.

His future is a very bright one. This young man is a "people horse" and loves to be pampered and cuddled, he will wrap his neck around your shoulders and beg for more and more hugs. He knows everything a young horse needs to know. Used to the wash rack, hot walker and more.
He is easy to load and travels well.

Looking for a true Young Horse Candidate? Or something for the Bundeschampionat? The answer can only be: Secret Affair HW

A true gem, he will bring a smile on your face - every day again and again!

We take pride in answering every e-mail right away (at least at the same day) and to return each call. If you don't get a reply - please try again, our spam filter might have gotten in the way?!
Please find info, video and other available horses at www.HWfarm.com