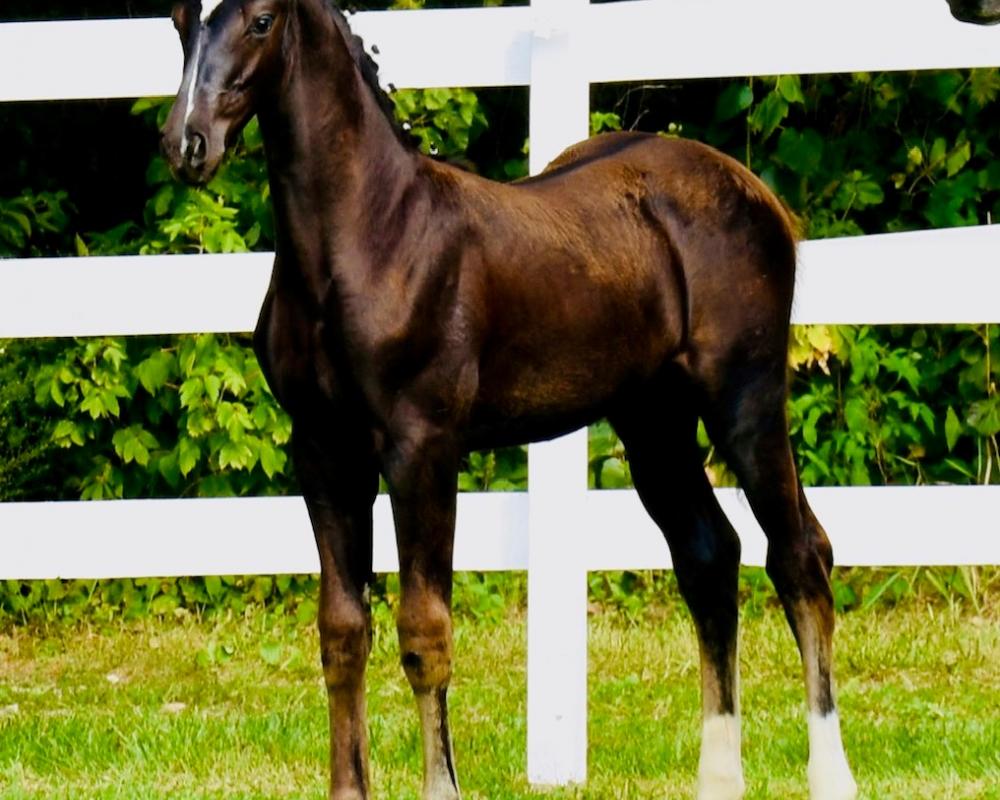 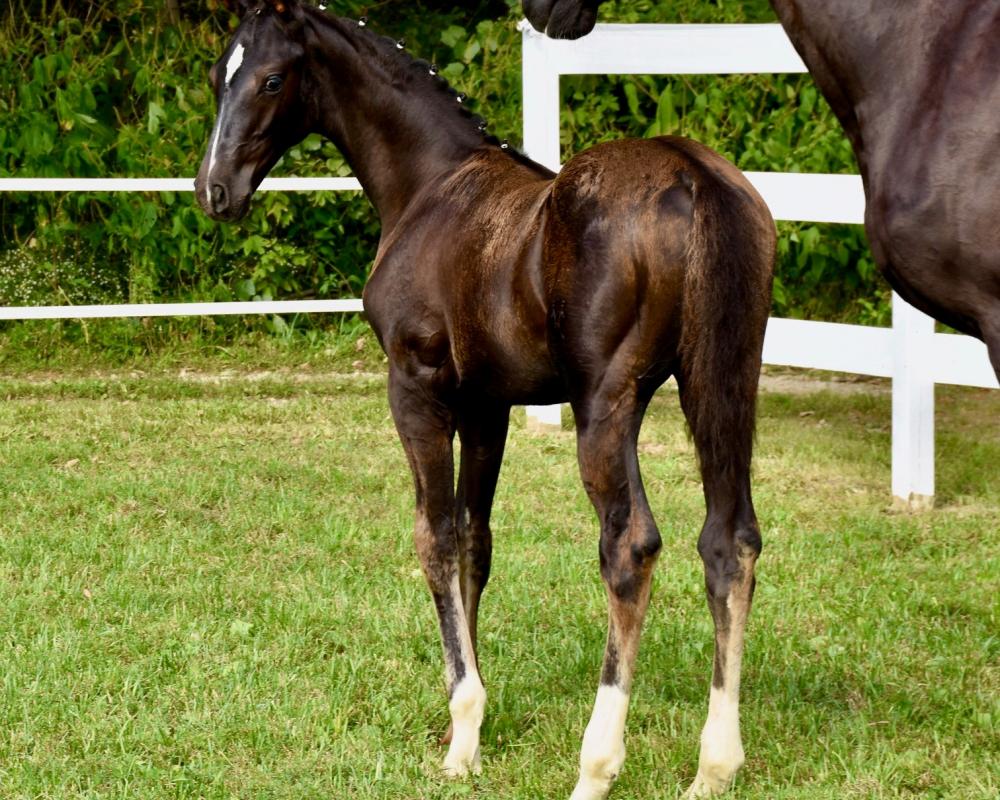 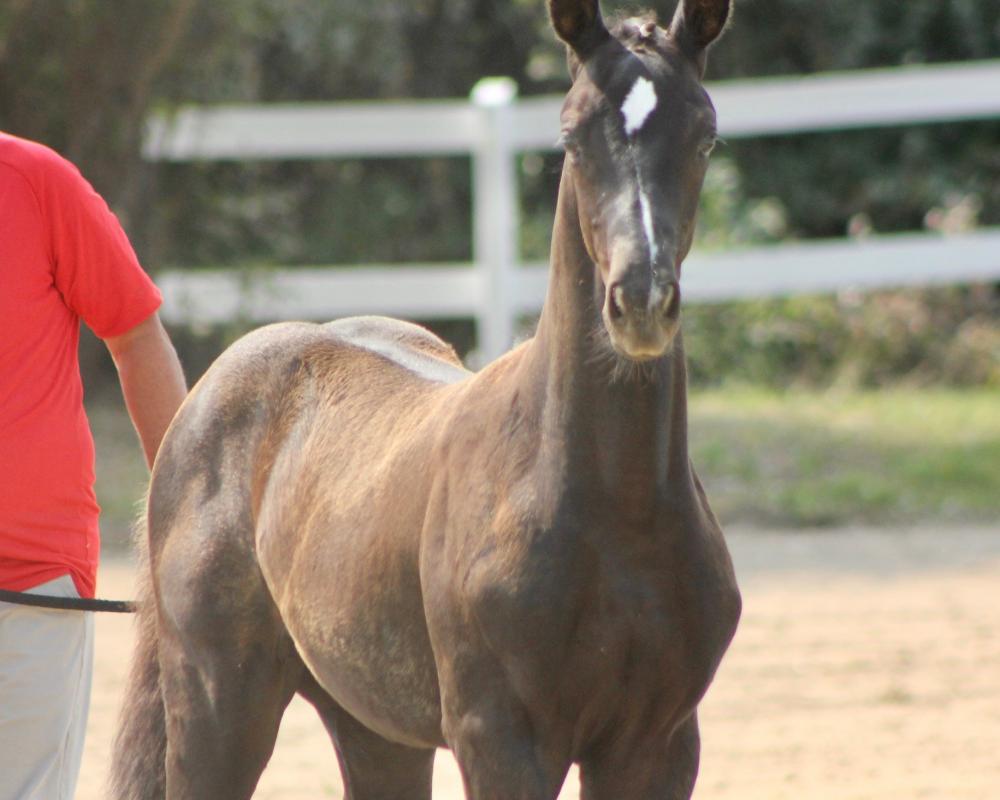 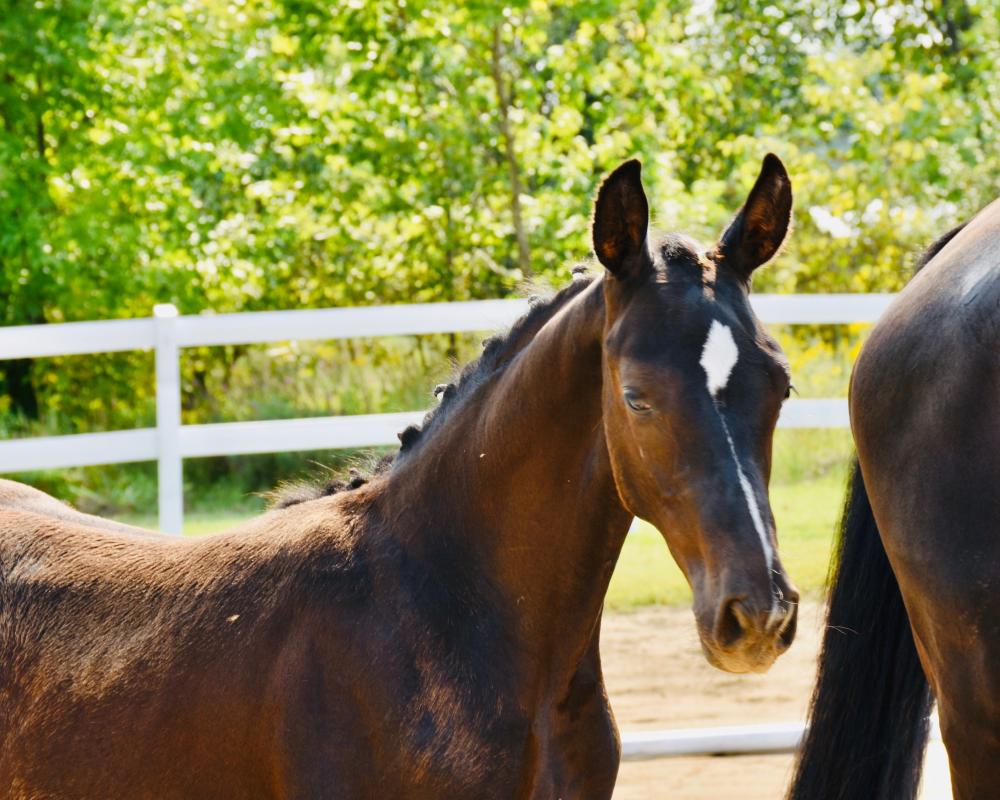 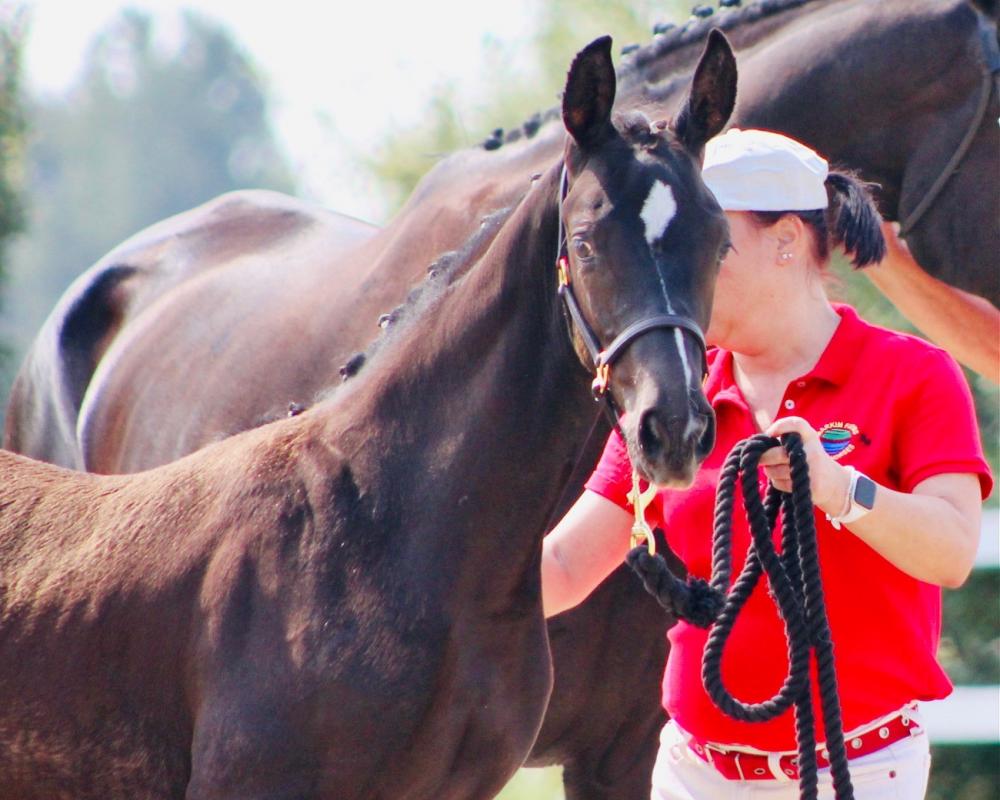 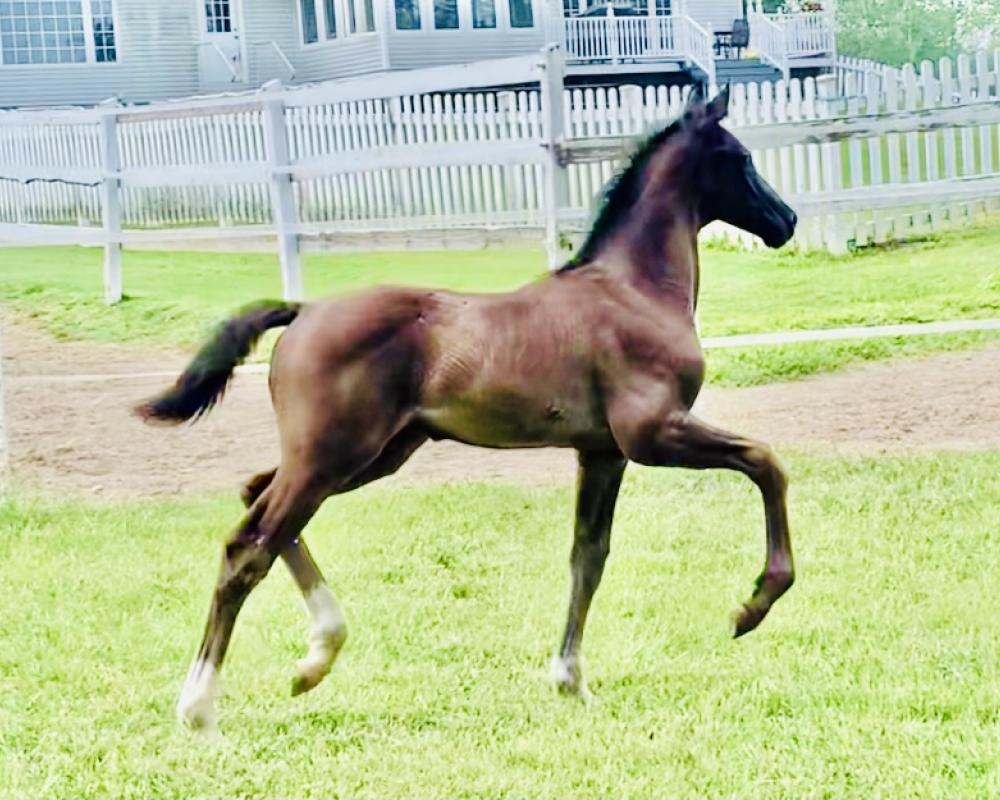 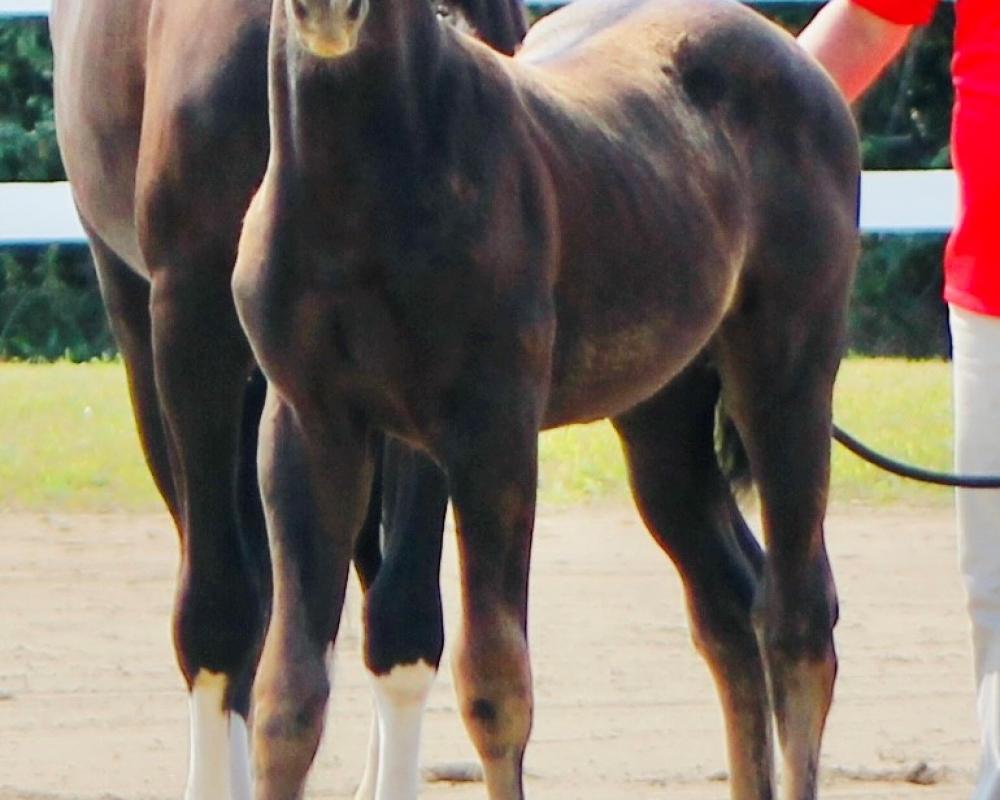 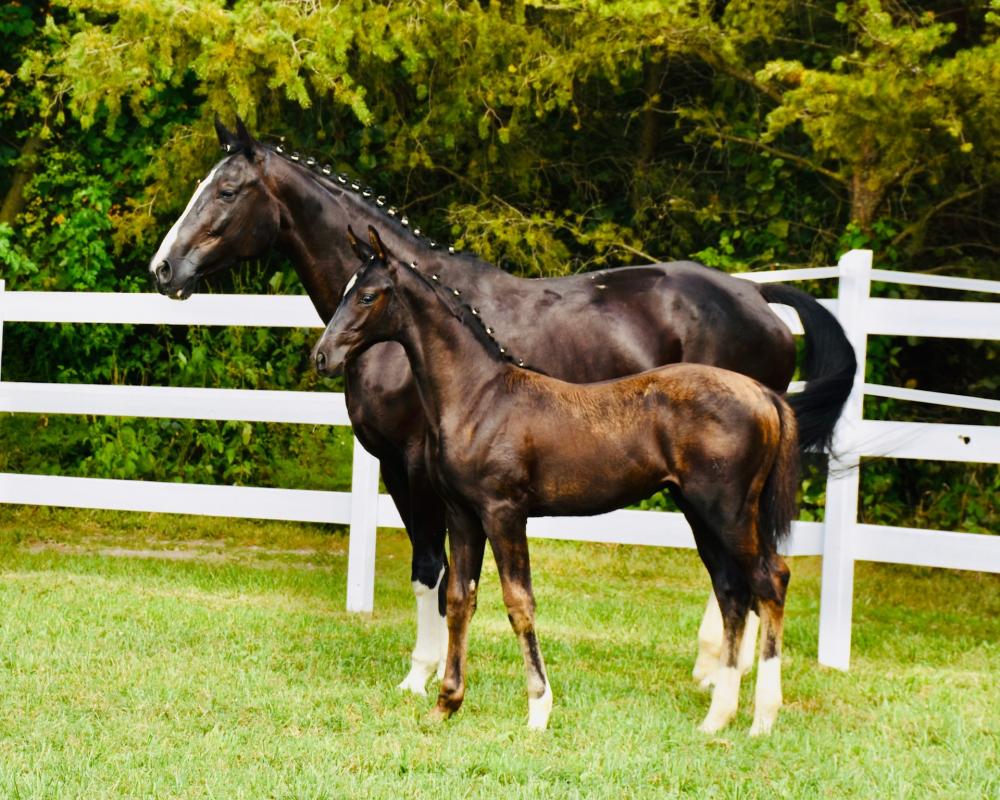 The dam of this foal is Esprentina NPF, who is a 2009 KWPN dressage mare by the European stallion Sir Oldenburg (Sion/Contender) and out of an impressive Florestan/Phonix(Pilot) dam. This tall (16.3hh), extravagant mover is a lovely dressage mare through and through. She has a long swinging walk with an ample overtrack, an impressive trot with high knee action and a great reach through from behind. Best of all her canter is VERY uphill and is ground covering. Esprentina is also out of a very strong damline. "Tina" has been approved for Hanoverian breeding by the German Hanoverian Verband.
Tina has produced six lovely foals which have gone on at a young age to CA, NB, MD, NS, and PEI. Several were called into the Final Ring at their Hanoverian Inspection and two were named Top Foal.

The sire of this foal is Sir Wanabi. Sir Wanabi has shown successfully in dressage and the hunter ring, completed a 100-day stallion test in the US, and become an Elite Hanoverian stallion licensed by more than half a dozen registries. His pedigree is most rare. By Santorini and out of a Lortzing mare, it is no surprise that Sir Wanabi had the highest dressage index at 123.10. Two of his fillies bred by Laprise Stables won both the Governor General’s and Lieutenant Governor’s Cups at the Royal Agricultural Winter Fair in 2013 and 2015. His offspring are also proving to be competitive hunters in Canada and the US.

Sir Wanabi’s sire, Santorini, was dressage-bred, through and through. Santorini was bred by Alfred Kratzke and is by Sunlight xx out of Dornroeschen (Dirk x Argentan). In Germany, Santorini was trained at S level and was up for stud at the Landesgestüt in Celle. He has two licensed sons: Souvenir (Santorini x Argentan) and one by Santorini x Dynamo. Santorini was famous for his spectacular brain, good movement, forgiveness, and his true, clean 3 gaits. He was very prepotent for passing this on to all of his kids. For the quality of foal, you won't be disappointed with a Sir Wanabi offspring - they carry traits true to Santorini - great brain, good interior qualities, rideability galore, athletic, good true 3 gaits. Sir Wanabi’s damsire is the Elite Hanoverian stallion Lortzing (Lombard-Kaiserin/Kurier), bred by Hans Eggers, Germany. Lortzing stood for six years at the State Stud at Celle, where he sired numerous approved sons and States Premium mares. His offspring have been utilized in breeding programs all over the world. Lortzing is descended from the Hanoverian L-line, a bloodline that helped produce Carol Lavell’s Gifted and Charlotte Bredahl’s Monsieur. He was a member of the famous Celle Black and White Quadrille that traveled throughout Europe and Canada. Achievements after importation to the United States included: qualifier for the Pan American Games trials in 1991; member of the Silver Medal-winning team at the 1991 Olympic Festival; 1995 qualifier for the USDF Regional Dressage Championships at Grand Prix Open; 1995 USDF/AHS All-Breeds Awards fourth place winner at Grand Prix; 1996 qualifier for the Olympic trials and 1998 USDF Gold Medal.